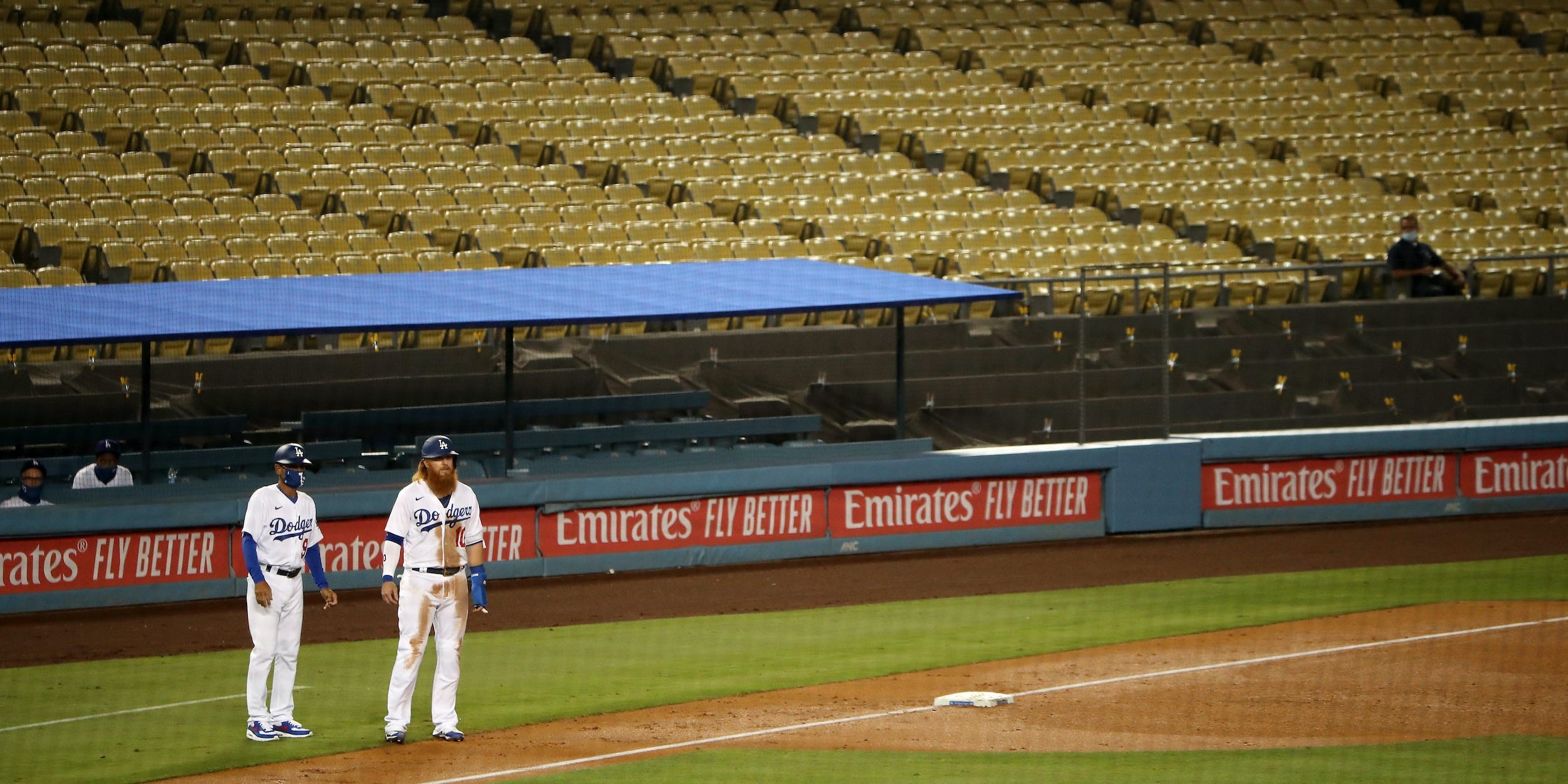 Katelyn Mulcahy/Getty ImagesJustin Turner #10 of the Los Angeles Dodgers stands on third base after a single by Cody Bellinger #35 during the third inning against the San Francisco Giants at Dodger Stadium on July 26, 2020 in Los Angeles, California.

Shares of sports gambling platform DraftKings tanked as much as 12.8% on Monday after a new coronavirus outbreak led Major League Baseball to postpone and cancel games.

The 2020 MLB season is among the few sports calendars relatively intact amid the coronavirus pandemic. Games began on Thursday after delays related to testing and implementing strict safety measures for players and staff.

Yet the season could end just days after beginning after the Miami Marlins played a game on Sunday despite four players testing positive for COVID-19, according to The Athletic. The league has since cancelled the Marlin’s Monday game against the Baltimore Orioles. Monday’s game between the New York Yankees and Philadelphia Phillies, who played the Marlins on Sunday, has been postponed.

“The members of the Marlins’ travelling party are self-quarantining in place while awaiting the outcomes of those results,” MLB said in a statement.


Read more:
Millions in profits and 5429 units: Here’s why Ryan Gibson is going all-in on storage unit investing after years of flipping homes – and the strategy he’s using to capture the booming trend

The delays and cancellations pose a serious risk for DraftKings. The firm went public in late April through a $US3.3 billion merger with special-purpose acquisition firm Diamond Eagle, well before any major US sports leagues resumed activity. Yet shares more than doubled in the months following as investors bet on economic reopenings and containment of the virus to revive sports and related betting businesses.

Even if major sports are delayed further, DraftKings has shown it can pivot to other betting ventures. Entries on the company’s fantasy esports contests skyrocketed 50-fold in March as customers started to brace for months without sports. DraftKings also allowed users to bet on virtual matches taking place in popular games including Madden NFL.


Gold prices can soar to a record $US2,000 on inflation fears and safe-haven demand, analyst says