Mark Humphrey/APDebris remains on the footpaths in front of buildings damaged in a Christmas Day explosion in Nashville.

Lior Rose was celebrating the holidays with family in Kentucky when he heard the news that an RV bomb had exploded on the doorstep of his tattoo shop, Nashville Ink.

None of his seven staff was on site at dawn on Christmas morning, but Rose immediately checked his web-connected security cameras and saw the damage.

At that moment, he told Insider, “it became real.” 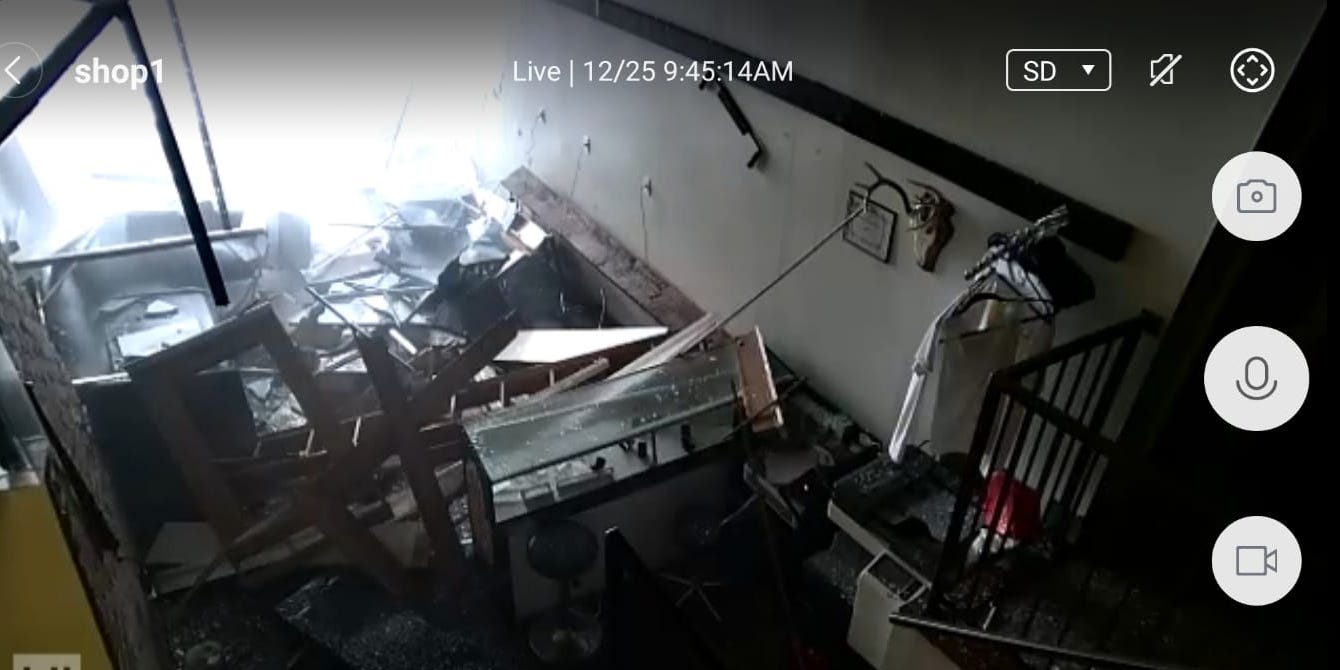 Rose’s shop was one of an estimated 41 businesses that were damaged in the blast that appears to have been targeted at an AT&T facility on the Second Avenue in Nashville.

But while community support has been swift, if US cities’ past encounters with domestic terrorism are any guide, the road to recovery for one of the South’s most beloved thoroughfares will require a lot more support â€” and money â€” than what has been committed so far.

‘A tornado, riots, and now this’

Police body camera footage from the scene showed debris and glass raining down over several blocks, including windows blown out onto First Avenue.

The owners of the side-by-side retail boutiques Ensemble and Simply the Best posted a photo on their website showing several floors of their building collapsing into their storefronts.

“This year has been absolutely heartbreaking for us as a small local business. Starting with a pandemic, going into a tornado, riots, and now this,” owners Sandy and Geff Lee wrote in an appeal for support.

In an interview with Insider, Sandy Lee said she and her husband had only just relocated the Ensemble store back in March, and that the building is now a total loss.

The Lees’ stores how have one of several GoFundMe campaigns that have been launched with mixed results. Pride and Glory, another tattoo shop, has raised nearly $US50,000, while Nashville Ink’s has raised just over $US4,500 at the time of this article’s publication.

Pete Gibson, the owner of Pride and Glory, attributed his campaign’s success to former clients that include athletes and musicians, along with friends in the close-knit tattoo industry, adding that his shop was “one of the busiest walk-in tattoo parlors in the country.”

Beyond the donations, Lee said reading the notes on the GoFundMe site from people all over the country has been a source of much-needed emotional support, and that for some supporters, the good feelings are reciprocal.

“They have hope from giving us hope,” Lee said.

On Monday, Marcus Lemonis, entrepreneur and host of CNBC’s “The Profit” and “Streets of Dreams,” announced a $US500,000 donation and the creation of a relief fund to help business owners like Rose rebuild with forgivable loans up to $US100,000.

Then, on Wednesday, Lemonis met with Second Ave business owners, including Lee, to discuss their financial and legal options.

“This community, like many others this year, have been through a lot and now to have a bomb wipe them out, it’s too much to deal with on their own,” Lemonis wrote in an email to Insider.

Lemonis added that he’d visited Nashville in 2019 and that he “fell in love with it,” he said. “To get emails from people feeling abandoned and scared, what else do you need to hear to get out there and help?”

Owners are hoping the money can stretch

The money raised so far is dwarfed by the losses that are still being tallied up, and Rose anticipates that much of it will not be covered by insurance.

Indeed, in the aftermath of the Boston Marathon bombing, many businesses spent years wrangling with insurers and had to absorb millions of dollars in losses â€” primarily due to interrupted business. A year after the Boston attacks, insurers had paid out over $US1.9 million to businesses in the area, but many were left well short of whole.

The Nashville explosion caused far more property damage than the attacks in Boston, and after a year of depressed sales due to the pandemic, business owners like Rose are anxious about what the coming months will bring.

The area around the explosion site remains sealed off, and Rose says he hasn’t yet been able to assess the actual damage to his shop, which he had just spent $US150,000 renovating in August.

Lemonis said that business owners who have suffered catastrophes like this “have every right to expect more” from their political leaders and their local community.

President Trump has been conspicuously silent about the act of domestic terrorism, and the mayor’s office website directs businesses to the Nashville Downtown Partnership, a local nonprofit, for assistance.

“As a society, we should expect and demand that people are there in our time of need,” Lemonis said. “Just like we would be for them.”

When asked about his outlook, Gibson said, “I’m a positive person, and I’m positive we’ll pull though this to the other side.”