Trump will lose his 'world leader' Twitter privileges on January 20, Jack Dorsey confirms — meaning he could get banned just like everyone else 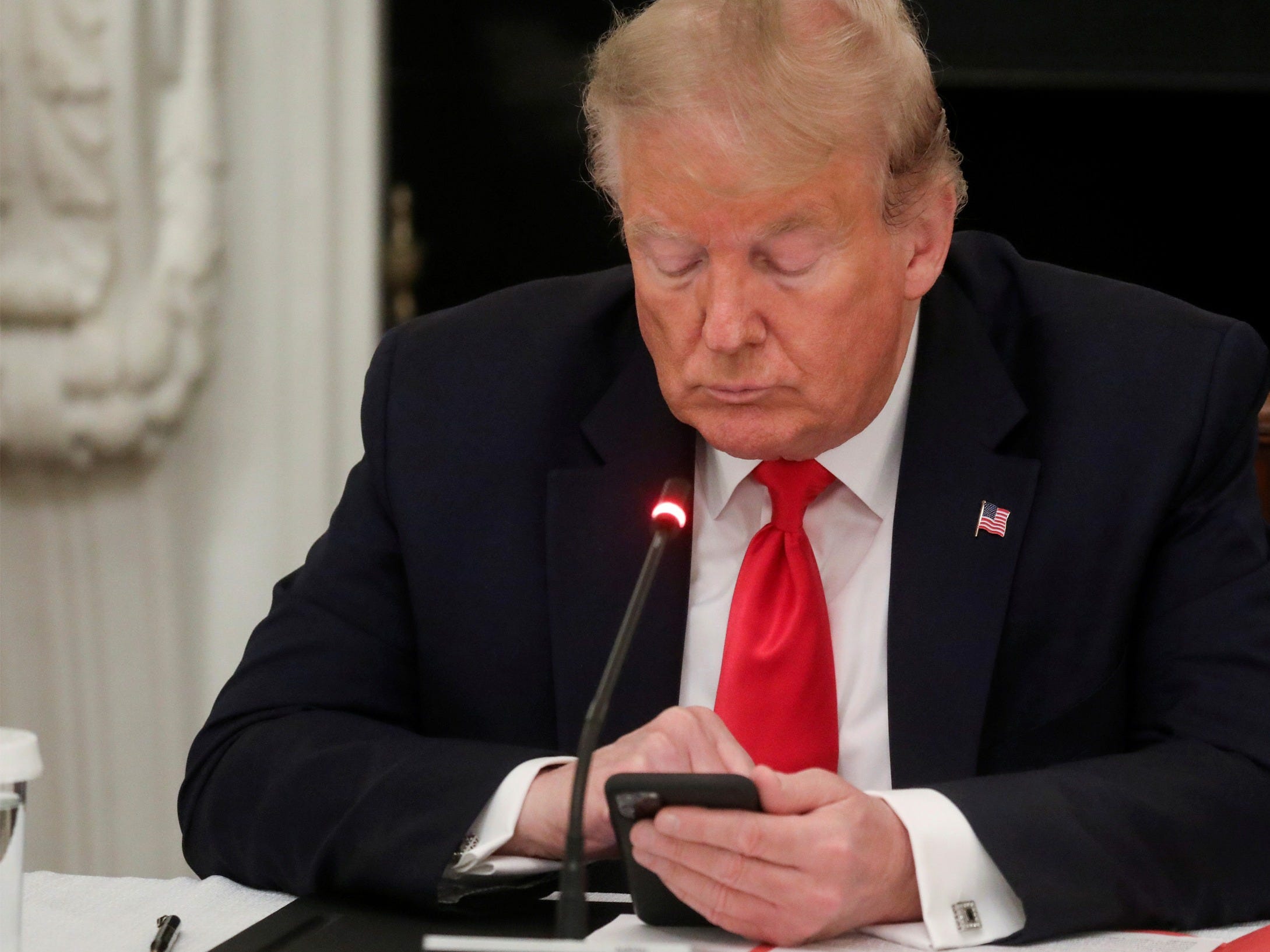 Reuters/Leah MillisPresident Donald Trump using a mobile phone during a roundtable discussion at the White House on June 18.

President Donald Trump has until late January to tweet with impunity.

That’s according to Twitter CEO Jack Dorsey, who appeared alongside Facebook CEO Mark Zuckerberg at a congressional hearing Tuesday. Responding to questions from lawmakers, Dorsey confirmed that special protections granted to Trump’s Twitter account would end with his presidency.

“If an account suddenly is not a world leader anymore, that particular policy goes away,” Dorsey said.

The social-media giant had confirmed to The Verge a week before the hearing that on January 20 â€” the scheduled day of President-elect Joe Biden’s inauguration â€” Trump’s personal Twitter account would lose its status as a “world leader” account.

World leaders are treated differently on Twitter. For them, tweets that would ordinarily be removed or result in sanctions are instead placed behind information cards, informing users that while they break Twitter’s rules, the platform has allowed the tweets to stay up.

This is because Twitter believes tweets from world leaders are in the public interest, even when they break its guidelines.

“A critical function of our service is providing a place where people can openly and publicly respond to their leaders and hold them accountable,” a Twitter representative told Business Insider.

“With this in mind, there are certain cases where it may be in the public’s interest to have access to certain Tweets, even if they would otherwise be in violation of our rules.”

A representative told The Verge that the policy “applies to current world leaders and candidates for office, and not private citizens when they no longer hold these positions.”

Two days later, it took action against a tweet of his about George Floyd protests in Minneapolis for breaking its rules on “glorifying violence.”

In the run-up to the 2020 election, Twitter started applying restrictions to tweets it deemed to violate its “civic integrity” policy. Many of these tweets detailed the president’s unsubstantiated claims about mail-in voting.

Since Election Day, the platform has taken action against numerous Trump tweets. Some simply have fact-checks next to them, while others are behind click-through blocks warning users: “Some or all of the content shared in this Tweet is disputed and might be misleading about an election or other civic process.”

Some groups argue Trump should lose his privileges long before Biden’s inauguration.

The Lawyers’ Committee for Civil Rights Under Law and the political watchdog Common Cause wrote an open letter to Twitter on Thursday asking the platform to suspend Trump’s account for undermining the integrity of the election.