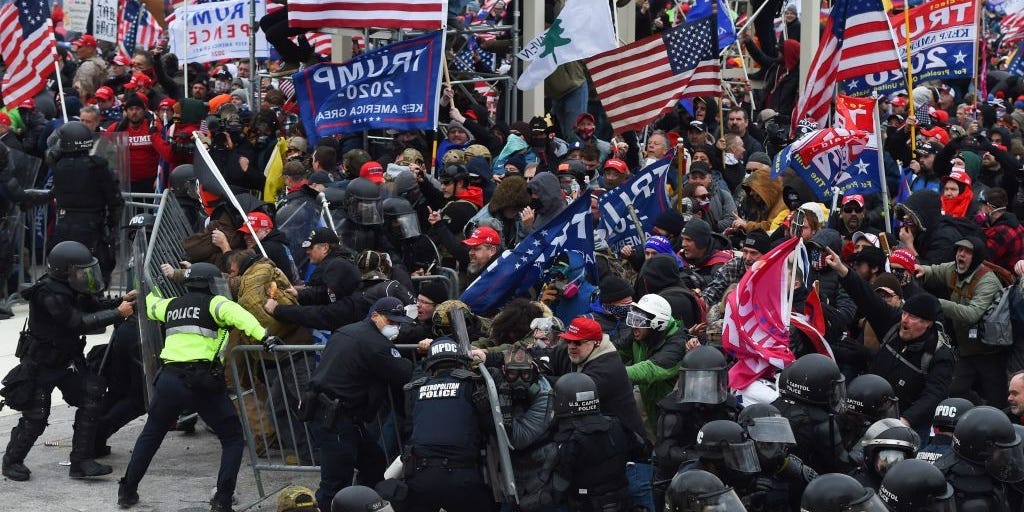 Roberto Schmidt/AFP via Getty ImagesTrump supporters clash with police and security forces as they push barricades to storm the US Capitol in Washington D.C on January 6, 2021.

The US Justice Department on Wednesday released a series of new videos that show the alleged assault of officer Brian Sicknick during the January 6 Capitol attack, including the moment prosecutors say a protester sprayed a substance at Sicknick, which caused him to retreat behind the police line to wash out his eyes.

Sicknick, 42, died one day after the siege, and was lauded as a hero in the aftermath of the attack. Earlier in April, the Office of the Chief Medical Examiner in Washington, DC, ruled Sicknick died of natural causes. The medical examiner found the officer had two strokes before his death. He told The Washington Post, “all that transpired” during the Capitol riot “played a role in [Sicknick’s] condition.

The videos have been cited as evidence in cases against two men charged with assaulting Sicknick during the riot by spraying a chemical irritant at him. George Tanios of Morgantown, West Virginia, and Julia Khater of State College, Pennsylvania, were arrested in March and charged with conspiring to injure officers and assaulting an officer with a dangerous weapon, among other charges related to their participation in the Capitol attack.

Tanios and Khater have not been charged in relation to Sicknick’s death.

Prosecutors had previously described and played the videos in court hearings for the two men, but Wednesday marked the first time the footage became available to the public. The agency initially rejected media organizations’ requests to release the video, citing possible security concerns, but the Justice Department later complied after a coalition of 14 media organizations filed a legal motion in federal court, citing the public’s “powerful interest” in seeing the video evidence, according to NPR.

The footage was taken by six surveillance cameras in the vicinity of the riot, three DC police body cameras, and one bystander’s cell phone video, according to NBC News.

In the videos, Khater can be seen wearing a “beanie with a pom-pom on top” while Tanios is visible wearing a red baseball hat. In a criminal affidavit, prosecutors say the video shows Khater and Tanios approaching a police line on the Lower West Terrace of the Capitol building, where Sicknick and other officers were positioned.

Around 2:14 p.m., prosecutors say Khater “is seen making his way toward Tanios, then reaching into his backpack, stating, “Give me that bear shit.” Tanios reportedly responds “Hold on, hold on, not yet, not yet … it’s still early.”

Khater retrieves a canister from Tanios’ backpack and walks to an area within “a few steps” of the police perimeter, court records said. Prosecutors say the video shows Khater aiming the canister in the direction of the officers while “moving his arm from side to side.”

Legal documents said Capitol police officers Sicknick and Caroline Edwards, and Metropolitan Police Department officer D. Chapman, were all standing within a few feet of Khater and all reacted to being sprayed in the face, retreating and bringing their “hands to their eyes and rushing to find water to wash out their eyes.”

The DC medical examiner told The Post Sicknick did not have an allergic reaction to chemical irritants that could have caused his throat to swell.

Neither Khater, nor Tanios is accused of breaching the Capitol during the riot.

In a motion for pretrial release, Khater’s defense argued it is possible the chemical spray that momentarily debilitated Sicknick and the other officers could have come from other law-enforcement officers, given the use of chemical sprays by police. Tanios’ defense has said he “emphatically denies each charge” against him.

Both men remain detained while awaiting a May 6 hearing.