25 adorable photos of dogs cuddling tigers, ducks, and other animals that prove they're not just a man's best friend Pam Ishiguro / Barcroft Images / Barcroft Media via Getty ImagesBarclay the dog and Rudy the duck are the best cuddle buddies.

Dogs may be known as man’s best friend, but it turns out they have been making other types of friends too.

From tigers to elephants to deer, here are 25 times dogs found best friends in other animals that will warm your heart.

Dogs have been making friends with other animals for as long as we can remember. 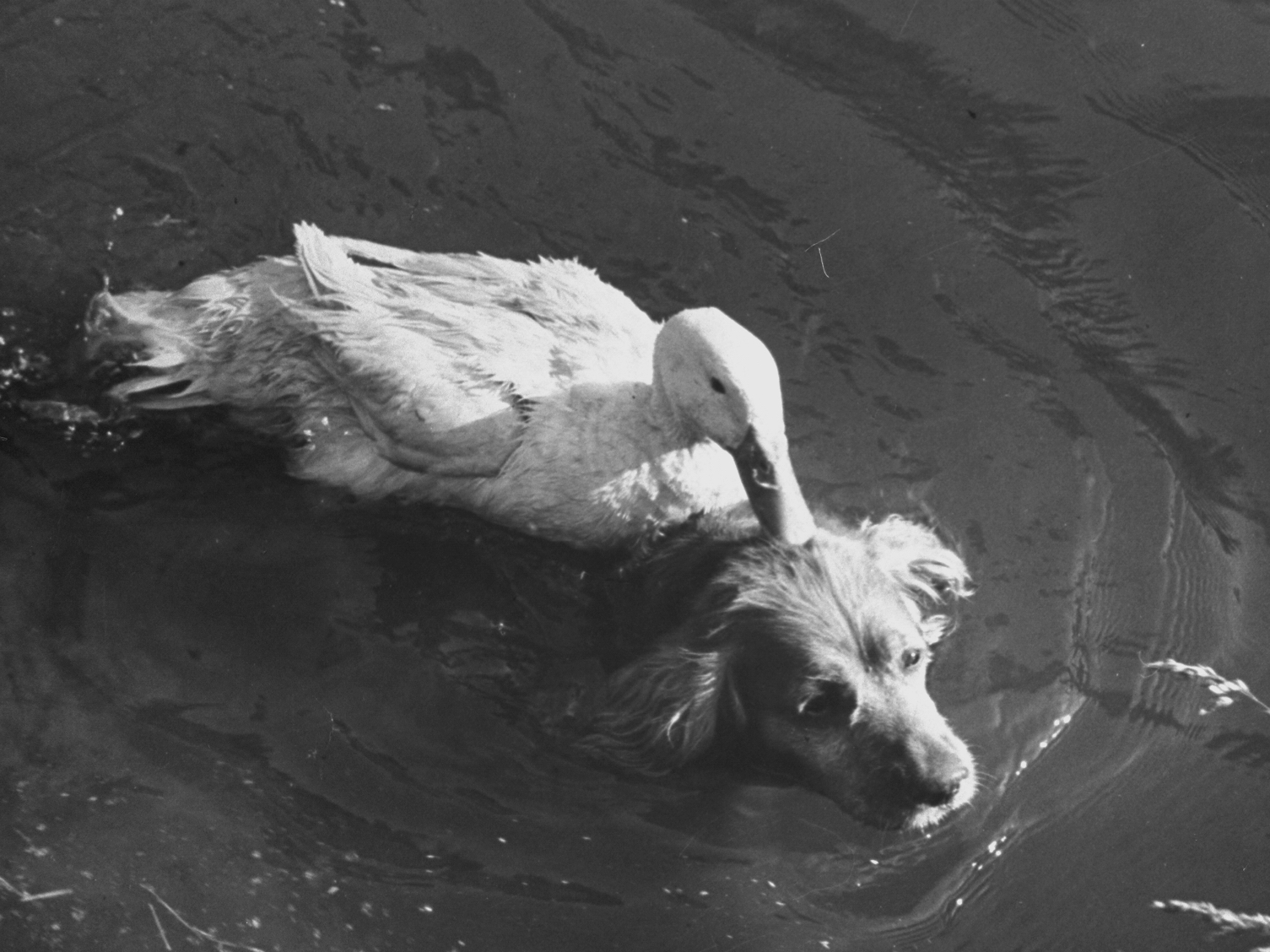 John Phillips/The LIFE Picture Collection via Getty Images/Getty ImagesA dog and a duck take a swim in the pond together.

Here, Donald “the dog-loving duck” takes a ride on the back of Rusty the cocker spaniel in 1949, according to Getty. 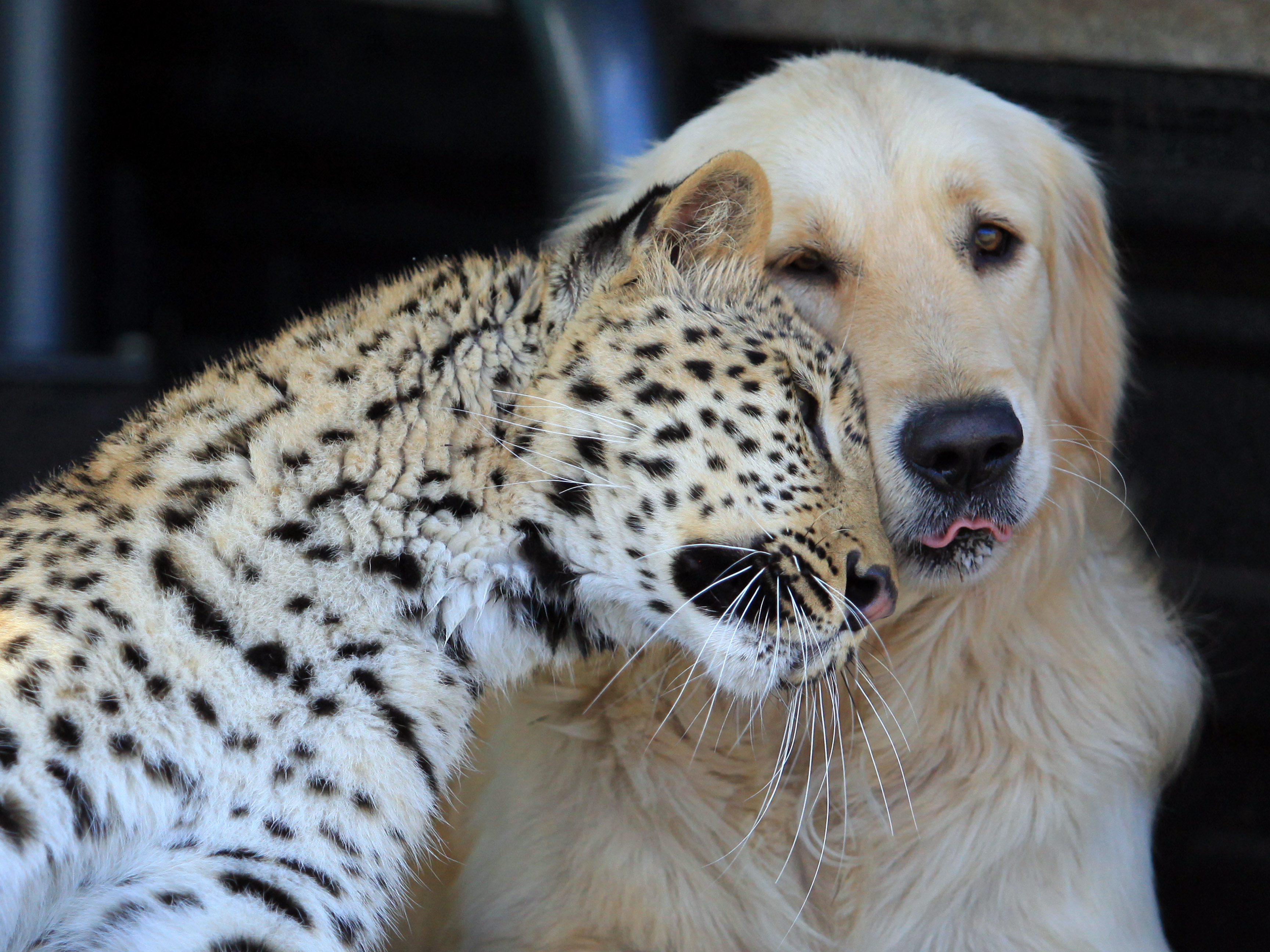 Matthew Tabaccos/Barcroft Media via Getty ImagesSalati the leopard snuggles up beside Tommy the golden retriever.

Salati the leopard and Tommy the golden retriever buddied up when the two became morning exercise partners. Animal wrangler Richard Brooker, 23 lets Salati and Tommy run around on his family’s large property daily, saying he never sees the two apart. Brooker adopted Salati from a local vet that helps rehabilitate injured animals, according to Getty.

This dog and hedgehog decided a communal nap was in order. 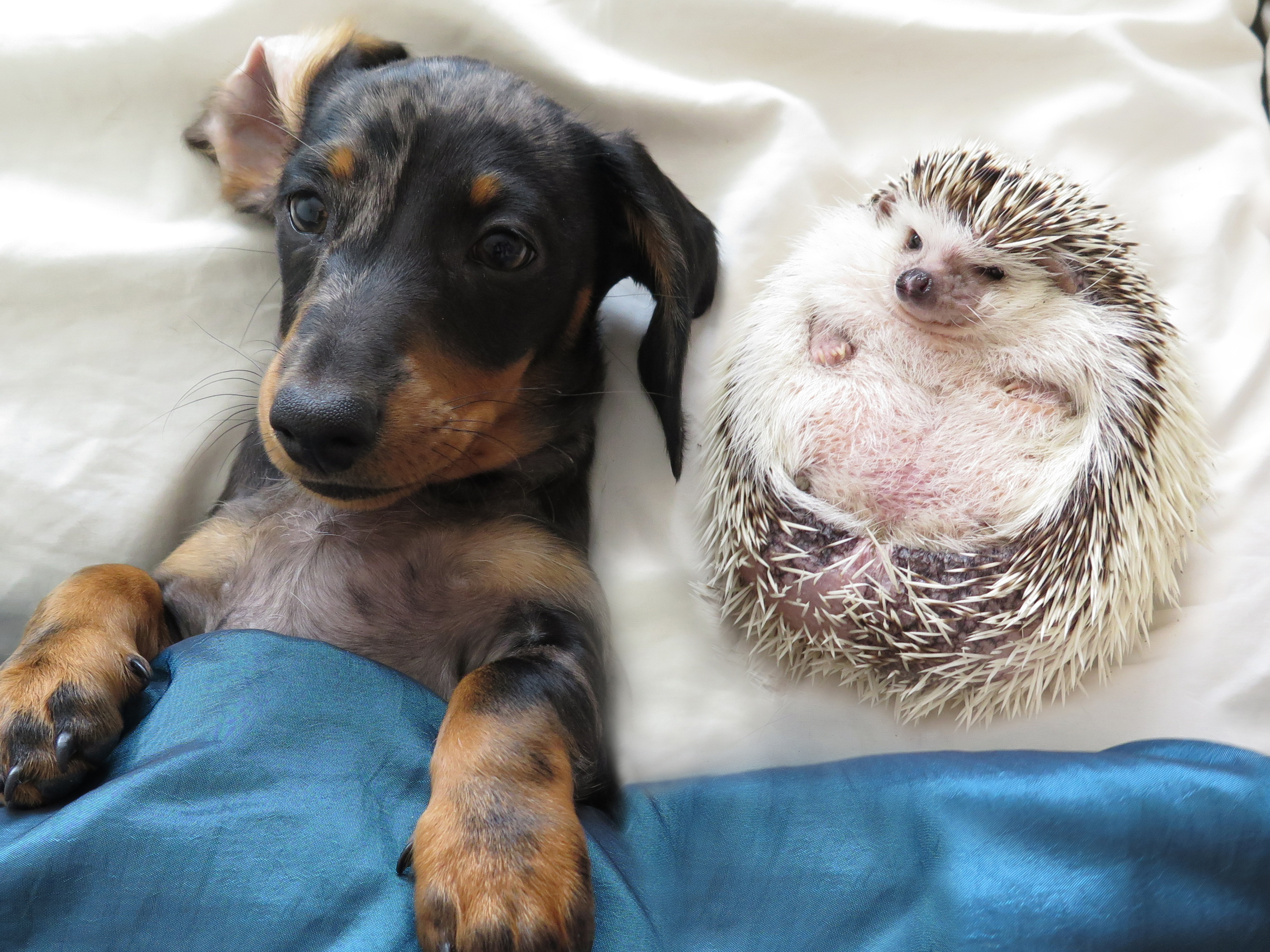 Dachshund Maya and hedgehog Minnie are part of a family of puppies and hedgehogs living in Surrey, England, which you can follow on Instagram at @mayathesausage.

It is always time for a hug, and this monkey and pup lead by example. 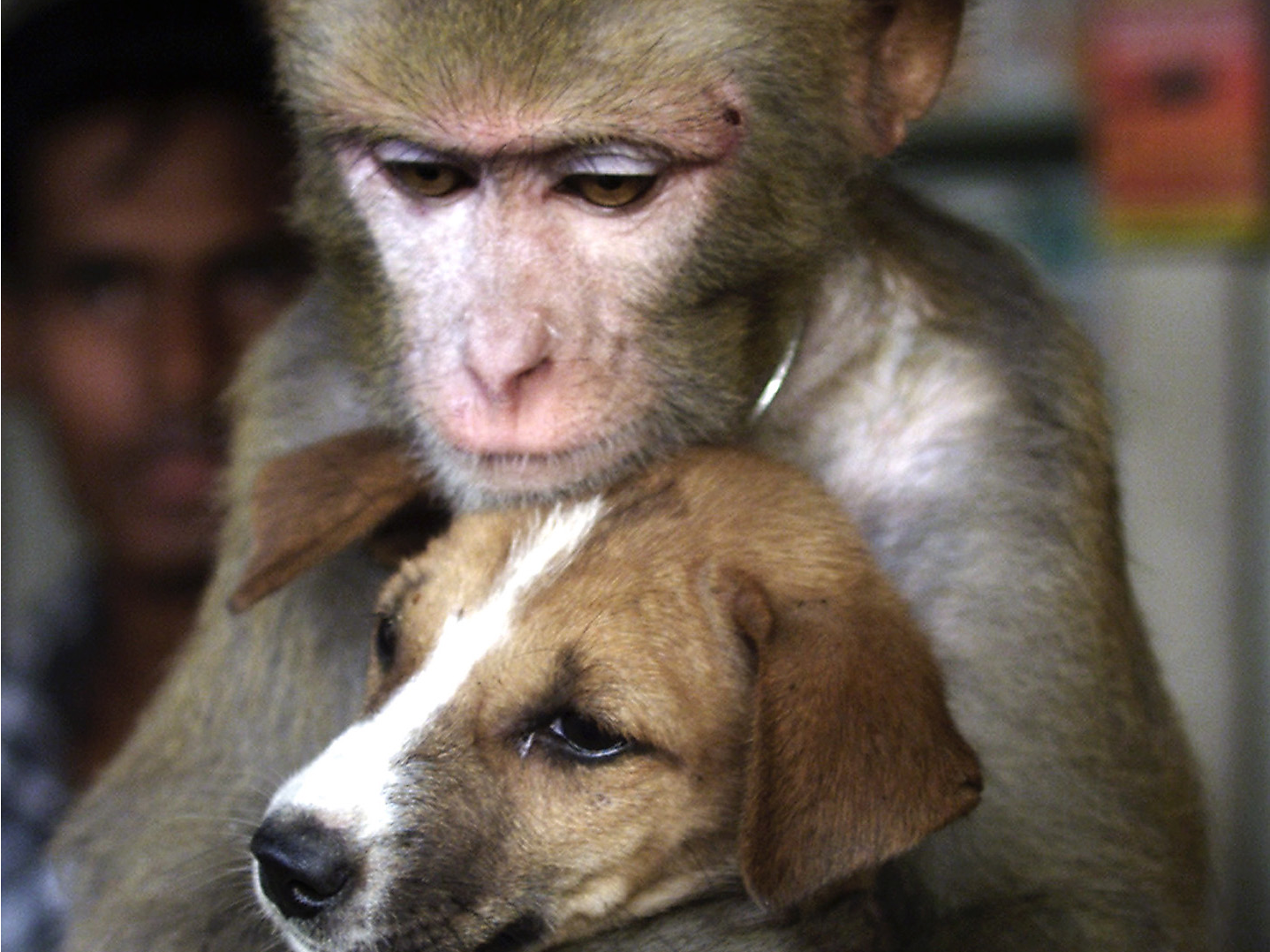 Rafiqur Rahman AA/ReutersA dog and a monkey hug it out.

This particular monkey-on-dog cuddle took place in the Bangladeshi capital of Dhaka in May 2002, and according to Reuters, this monkey has “adopted” the puppy and is seen frequently giving it hugs.

This French bulldog buddied up to this boar piglet immediately. 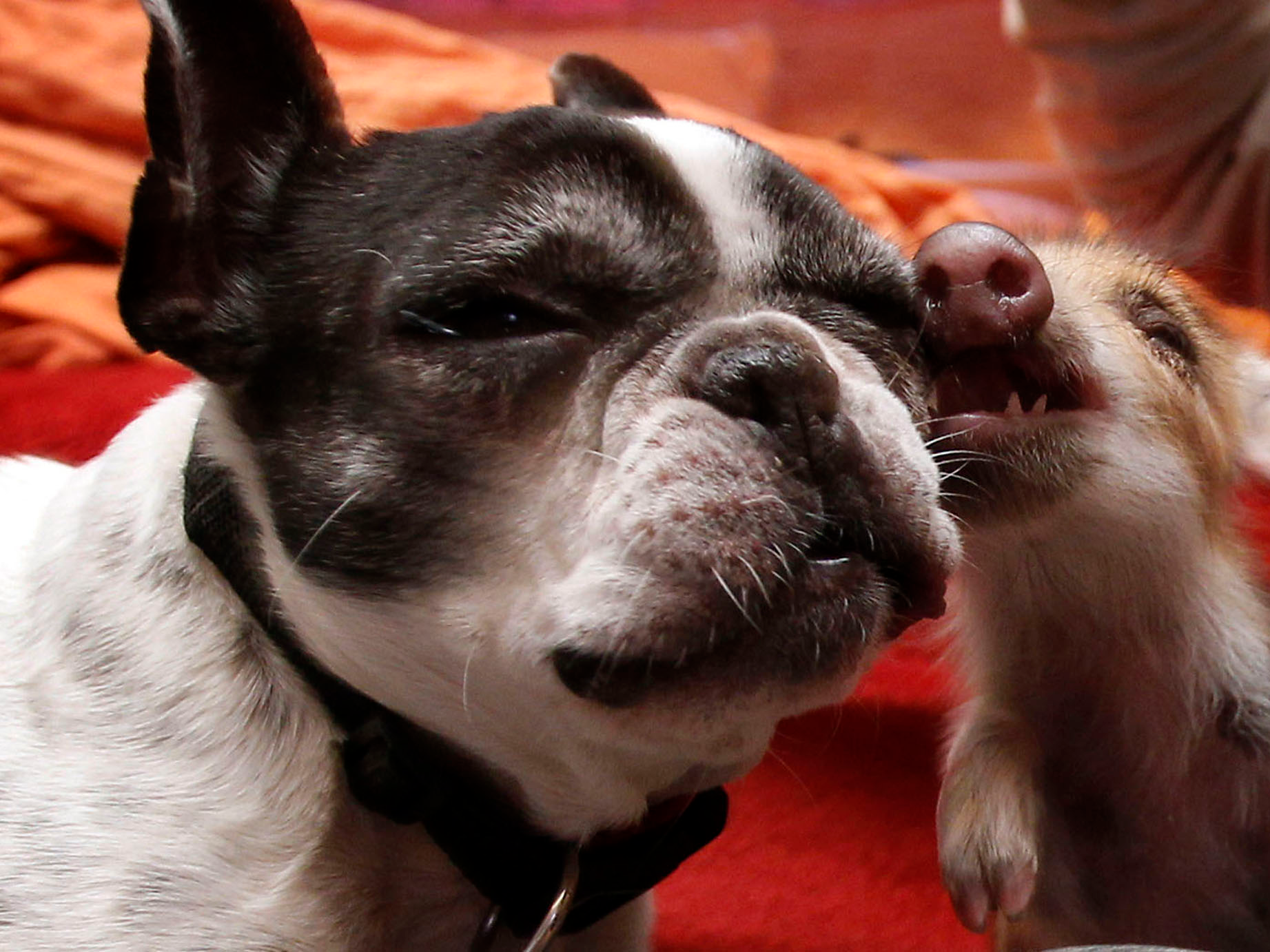 According to the Associated Press, this French bulldog’s name is Baby, and when it visited the Lehnitz animal sanctuary in Germany and met six little piglets, it ran over to snuggle them right away.

Barclay the dog smiles as Rudy the duck rests its beak on his head. 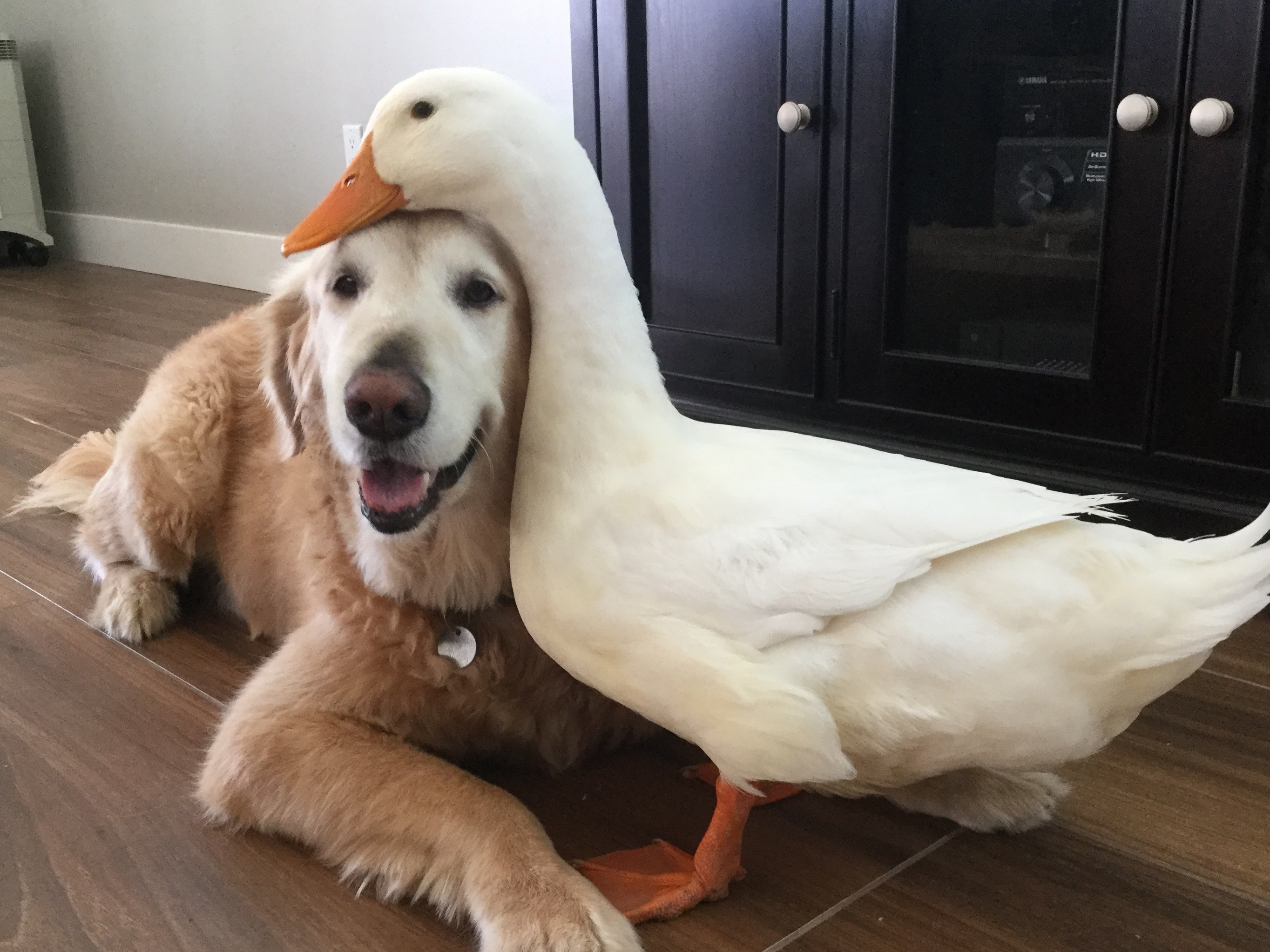 This particular pair of best friends was caught on camera a few years ago by proud owner Pam Ishiguro, who owns seven ducks. She says when Barclay and Rudy are together, they are constantly hopping and playing, and when they are apart, they are always calling for each other to come back.

Sometimes your buffalo friend’s butt is the best place to relax. 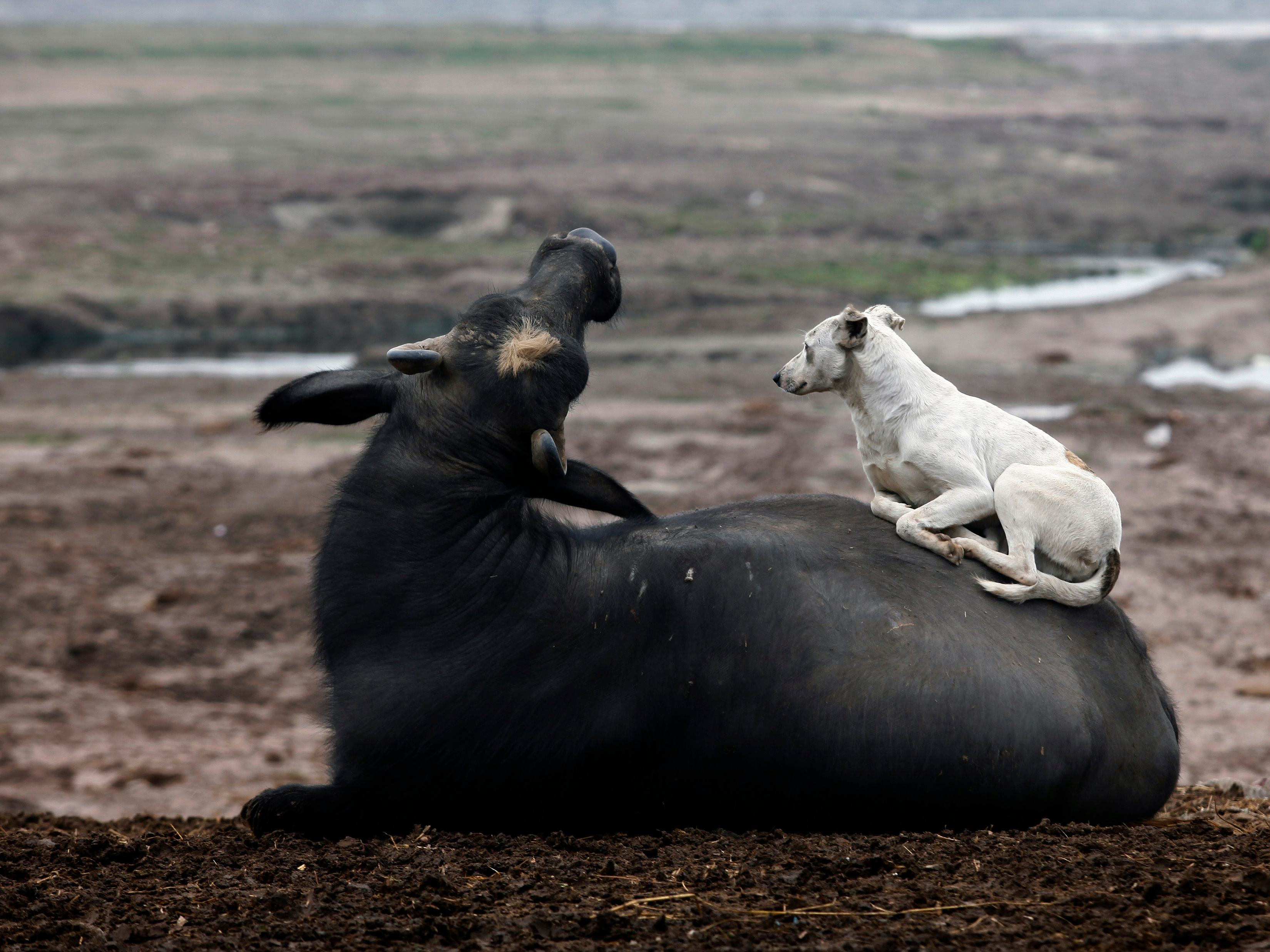 These best friends were caught on camera in Ravi River in Lahore, Pakistan.

This French bulldog found a friend in a 2-week-old baby tiger. The tiger was rejected by its mother at Shirotori zoo in southwestern Japan, according to Reuters. The zoo reported that the dog was nursing the tiger, giving it the proper care that it needs, even without a mother.

Bella the dog hangs out with Tarra the elephant at the Elephant Sanctuary in Hohenwald, Tennessee. 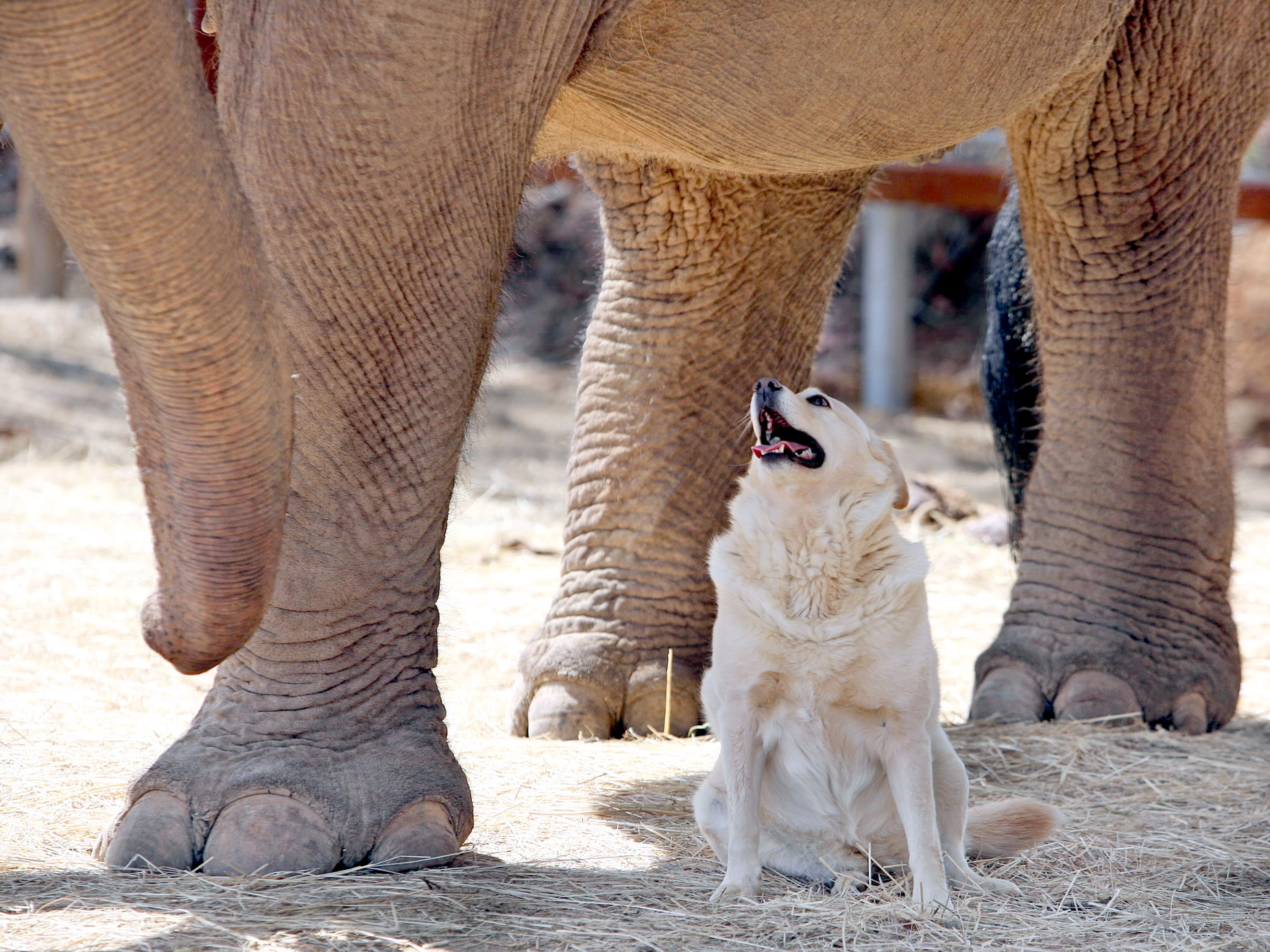 The two followed each other around and even slept together, according to Getty. The Elephant Sanctuary has rescued 19 elephants and keeps them isolated from most human contact, but it looks like they make exceptions for dogs!

Apparently dogs and ducks have been making friends for decades. 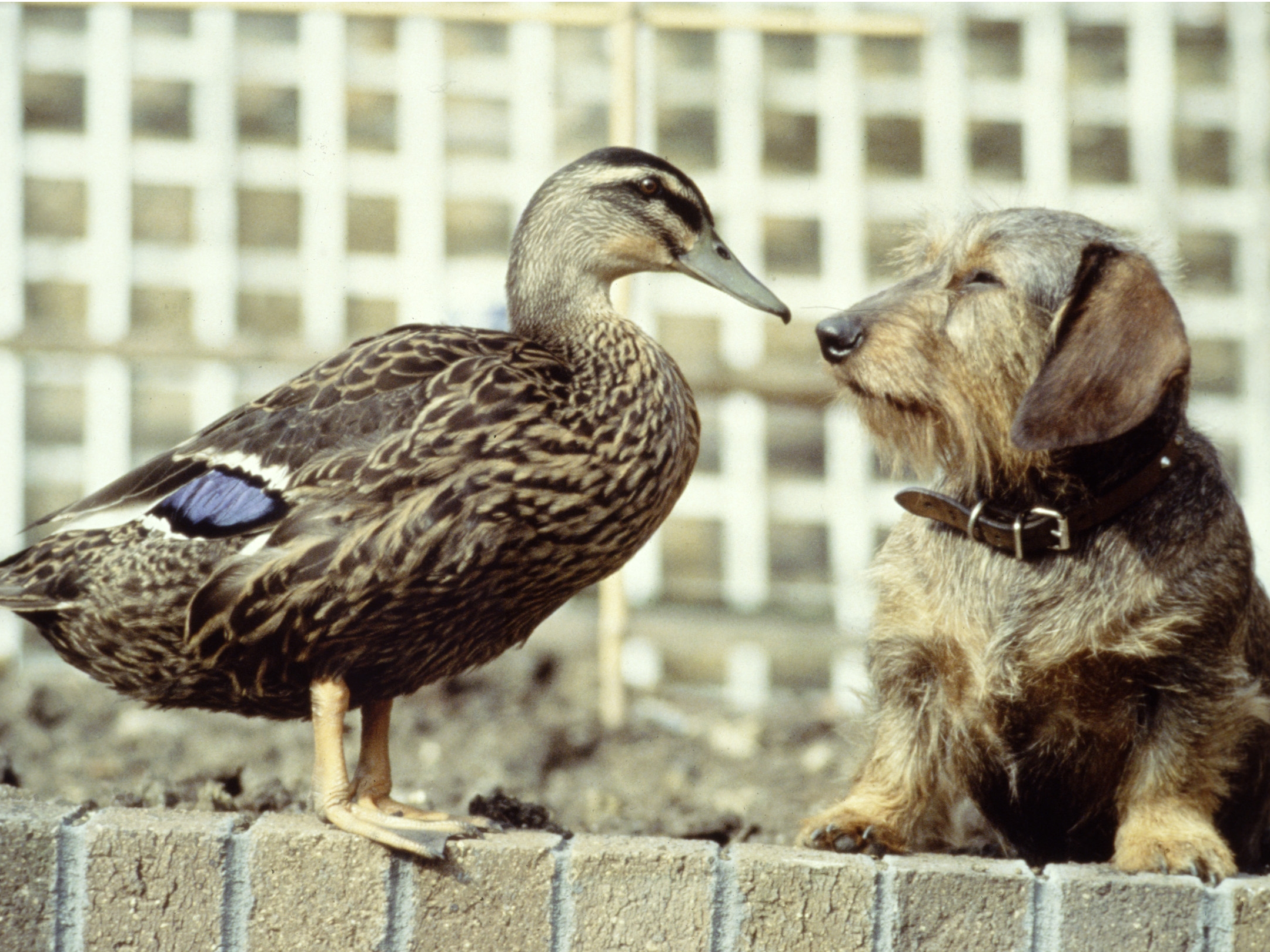 Arthur Sidey/Mirrorpix/Getty ImagesA dog and a mallard duck basking in the sun.

Ping the mallard duck hung out with her friend Bramble the dachshund in July 1983.

Sometimes a tiger just wants to hug a dog and be it’s best friend. Ilya Naymushin AS/AT/ReutersA tiger cub plays with a dog at the zoo in Siberia.

Here, a 4-month-old Amur tiger cub plays with a pup at a zoo in the Siberian city of Krasnoyarsk in September 2005. Similar to the pug and baby tiger pair from Japan, this dog also nursed the tiger cub and another Sumatran tiger cub after their mothers wouldn’t nurse them, according to Reuters.

Shona the deerhound made friends with Roro the roe deer. 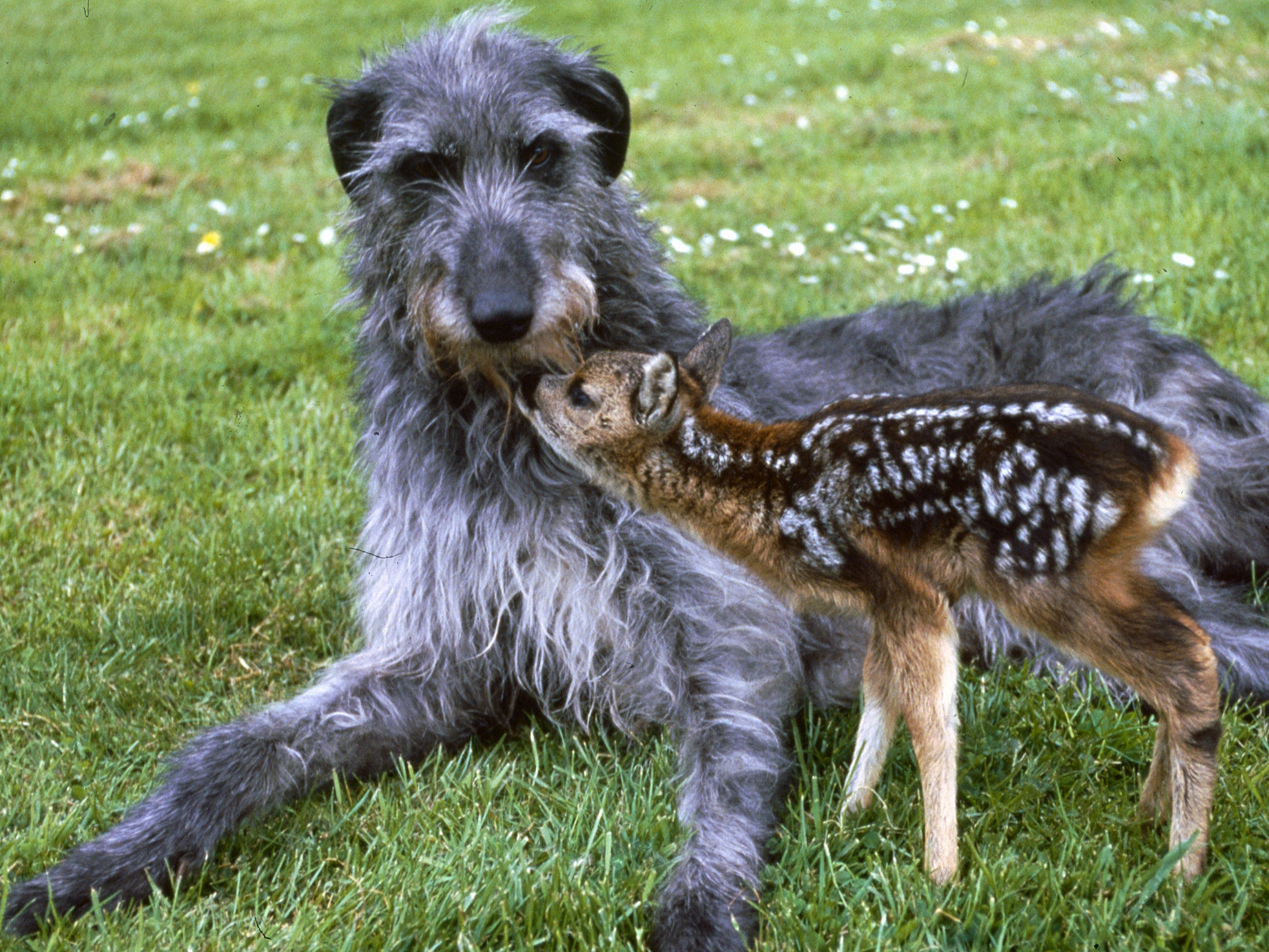 Shona the deerhound is pictured here with Roro the roe deer, in July 1989.

Cats and dogs are a classic duo, but throwing mice into the equation is hilariously cute. Jeff Topping/ReutersA cat, a dog, and some mice.

This dog, cat, and mice friend group is adorable to witness.

This dog will roll with whatever its cat friend wants to do. 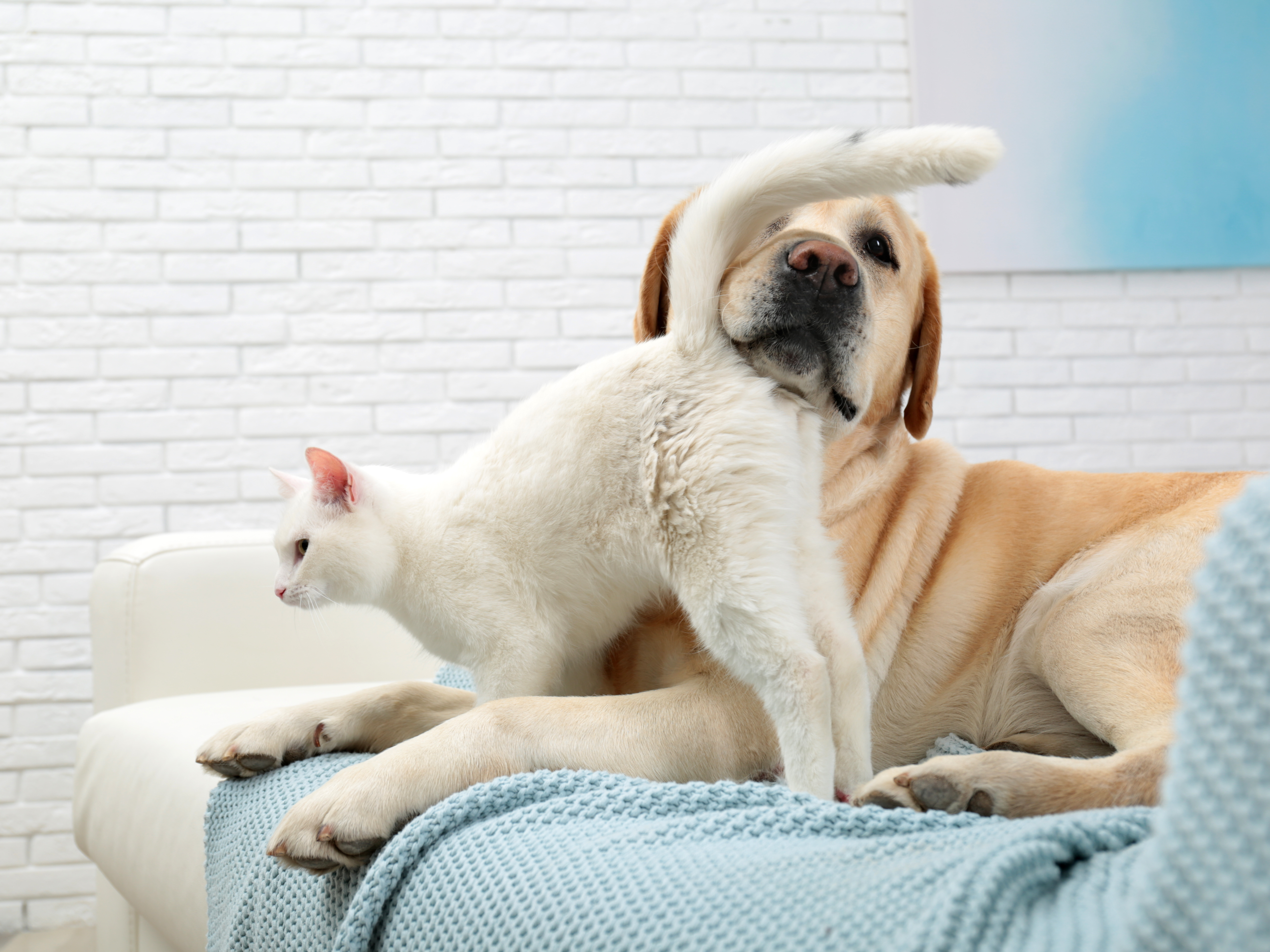 New Africa/ShutterstockA cat gets extra cosy with its dog buddy.

Cats and dogs are the perfect pair, and it’s always cute to see the two lounge around and just enjoy each other’s company.

This brown bear carried its dog bud during a circus show. 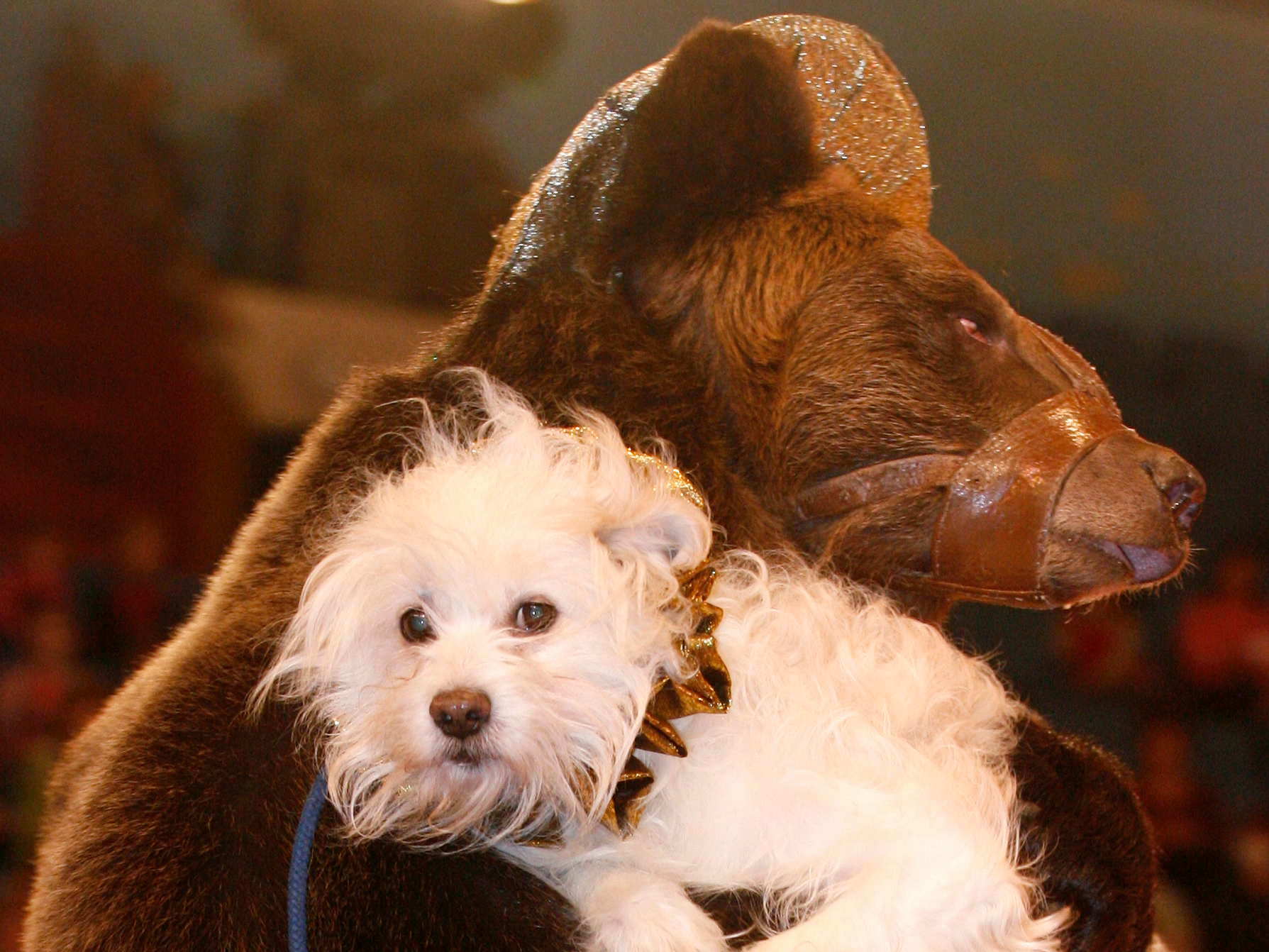 Ilya Naymushin/ReutersA dog and a bear performing in a circus show.

Here, a brown bear carries a dog during a show in a circus in the Siberian city of Krasnoyarsk, in 2009.

Shura the dog made friends with a roe deer at the Simferopol zoo in Crimea. Stringer/ReutersThe unlikely pair go in for a kiss.

In a tragic, real-life “Bambi” story, the deer was found in the forest by its mother, which had died. Now, the deer and dog have become best buds, spending hours cuddling and attached at the hip.

Are foxes and pups really that different? This dog and fox pair doesn’t care either way. These two were spotted at Laguna’s Festival of Arts in Laguna Beach, California.

Here’s more proof dogs and cats might be the cutest animal pairing. iStockA dog and a kitten can always be friends.

This dog may be large, but it’s obvious he is gentle and loving with this little kitten.

Here’s another for good measure. 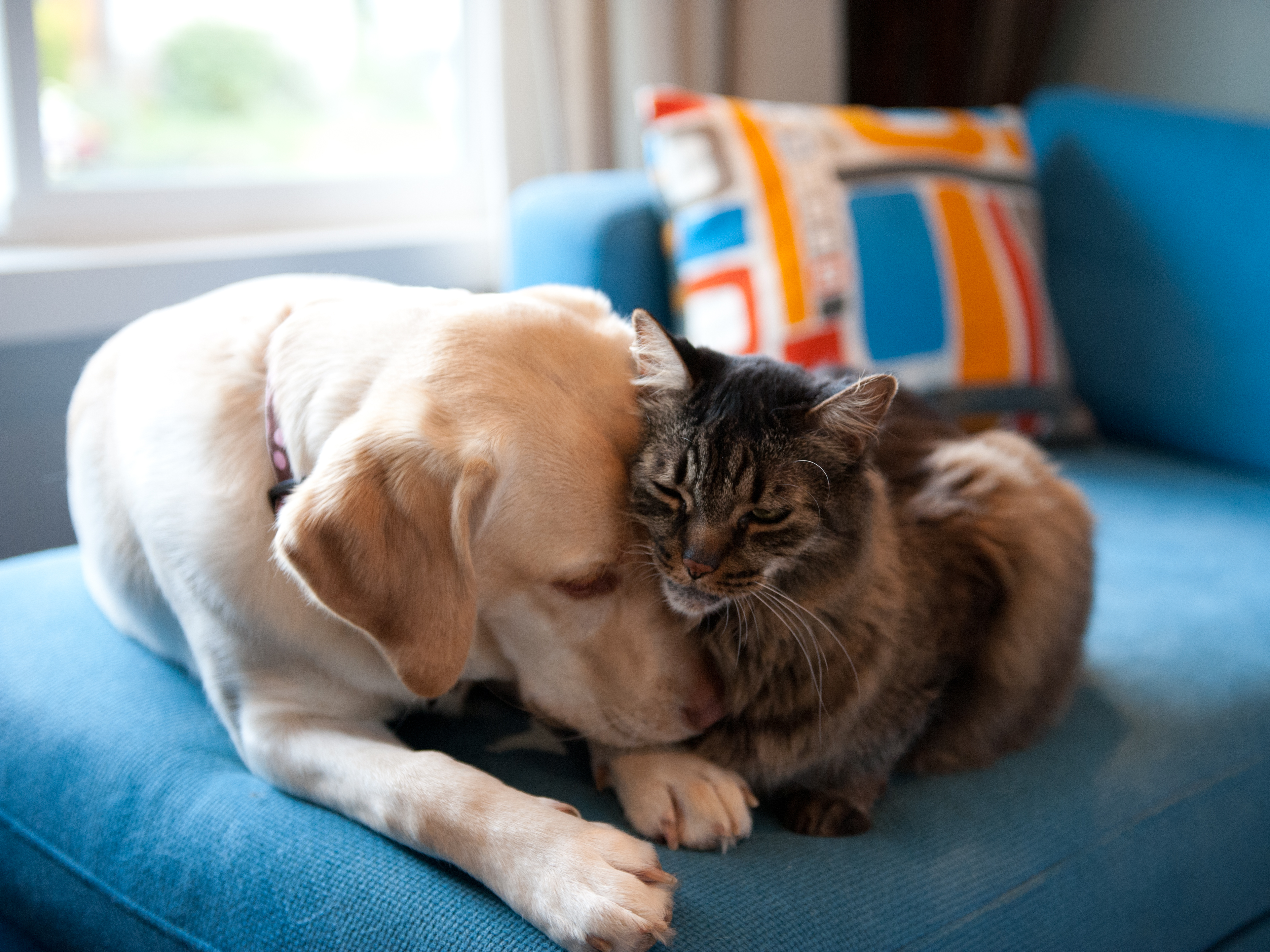 Getty ImagesA dog and cat cuddle on the sofa.

Sometimes animals have to stick together, and this adorable pair is the perfect example.

It may look like this Dalmatian and tiger are fighting, but we choose to believe Reuters when it tells us this was just harmless fun. One-year-old white tiger Bombay played with 4-year-old Dalmatian Jack in Berlin, Germany. The two lived together for a few months, according to Reuters.

A dog gently sniffs his turle friend as he slowly walks by. 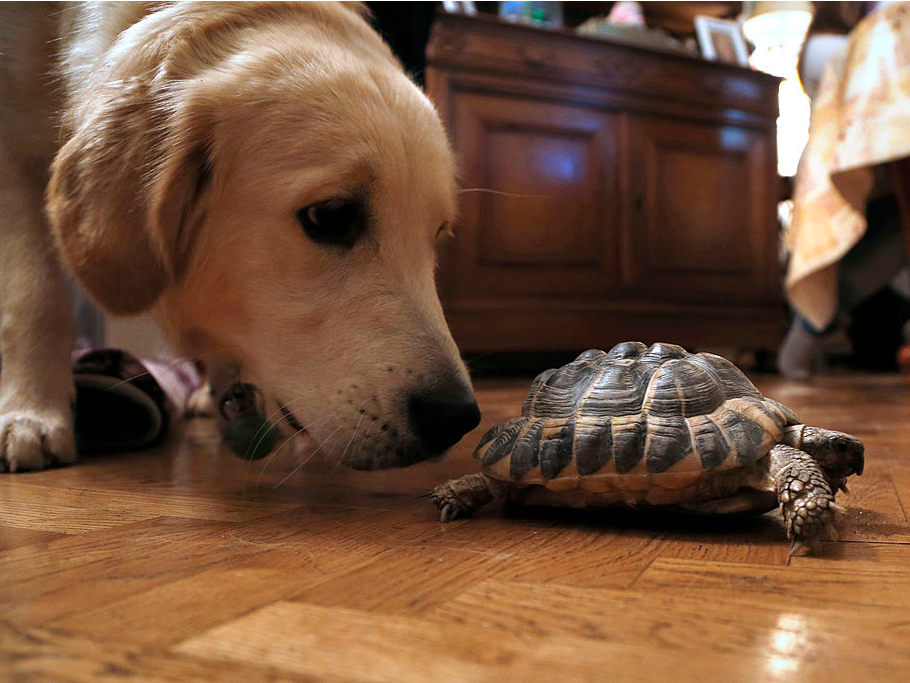 Francois Guillot/AFP via Getty ImagesA turtle walks past his dog-friend.

This dog and a turtle live together in a small flat in Paris, where they respect each other’s space and prove friendships come in all shapes and sizes.

A baby goat and a dog bond on a pony farm in Blagoveshchensk, Russia. 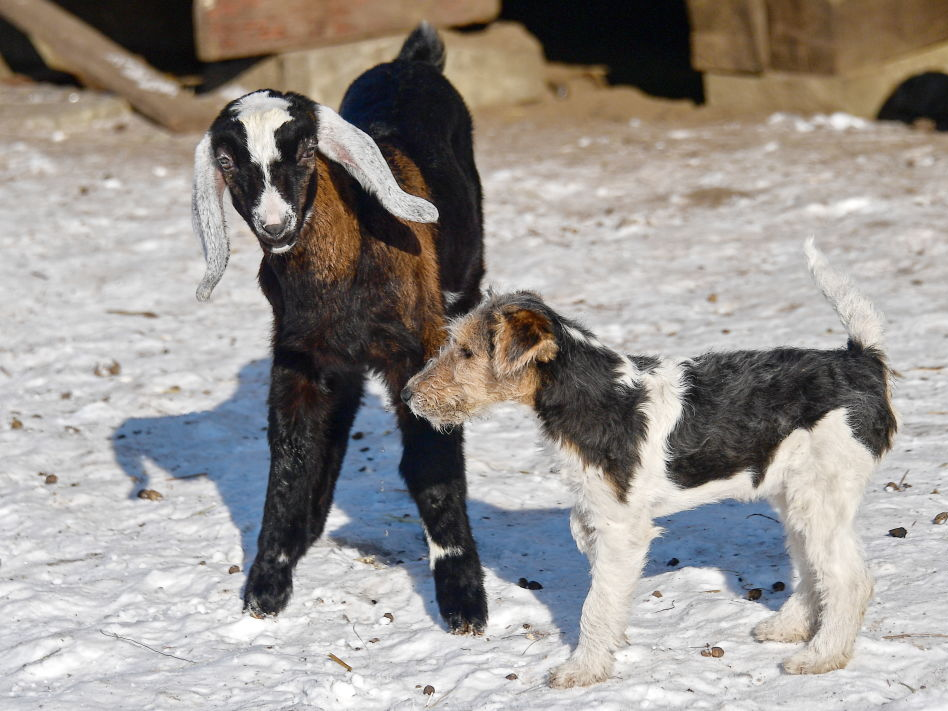 The pony farm has horses, goats, and twenty ponies roaming the grounds. All the animals spend time together, including this cute duo. In Germany, Killer the Jack Russel terrier rescued baby Pepe the squirrel, and a beautiful friendship was born.

Kalula the dog and Cuervo the macaw formed a friendship in Cape Town, South Africa. 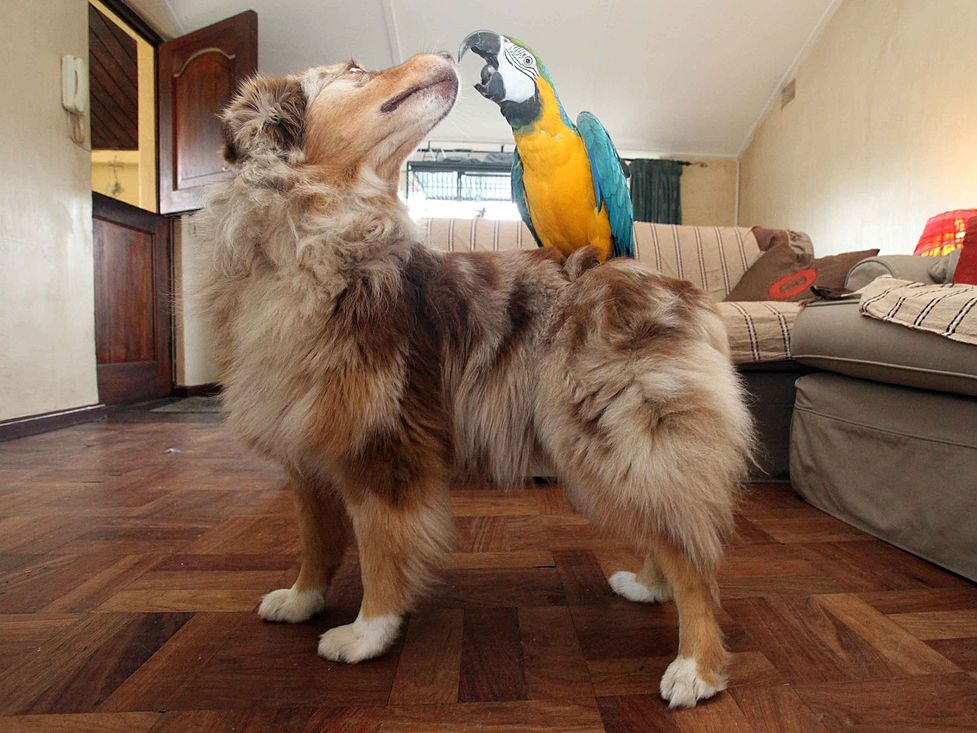 Cuervo and Kalula love to pass the time together, and Cuervo often hops on Kalula’s back to hang out. Kalula is trained to do all sorts of tricks for her owners, who described her to Getty Images as a “quick learner.”

This dog nursed a slew of newborn tiger cubs in the Shandong province of China. 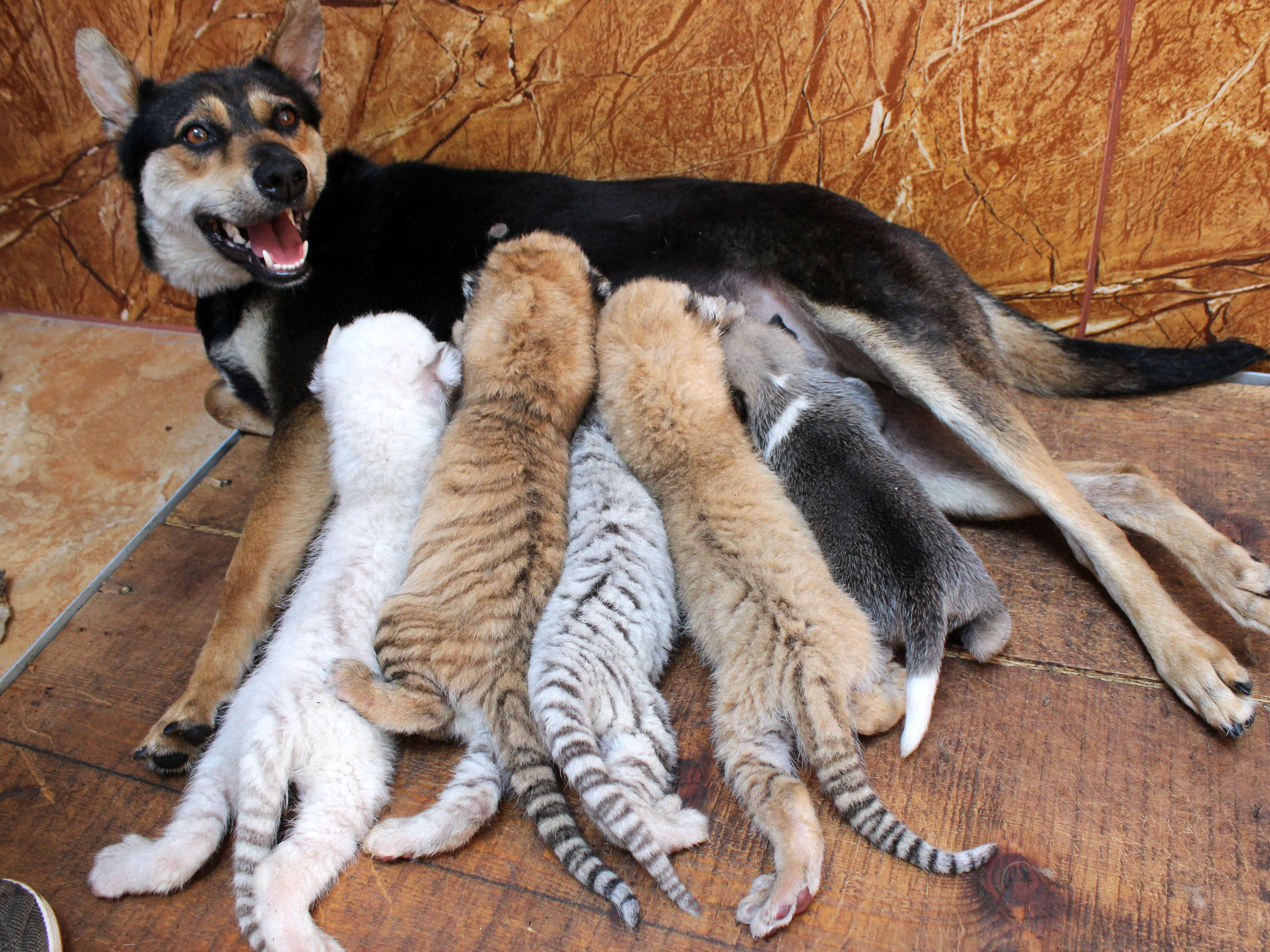