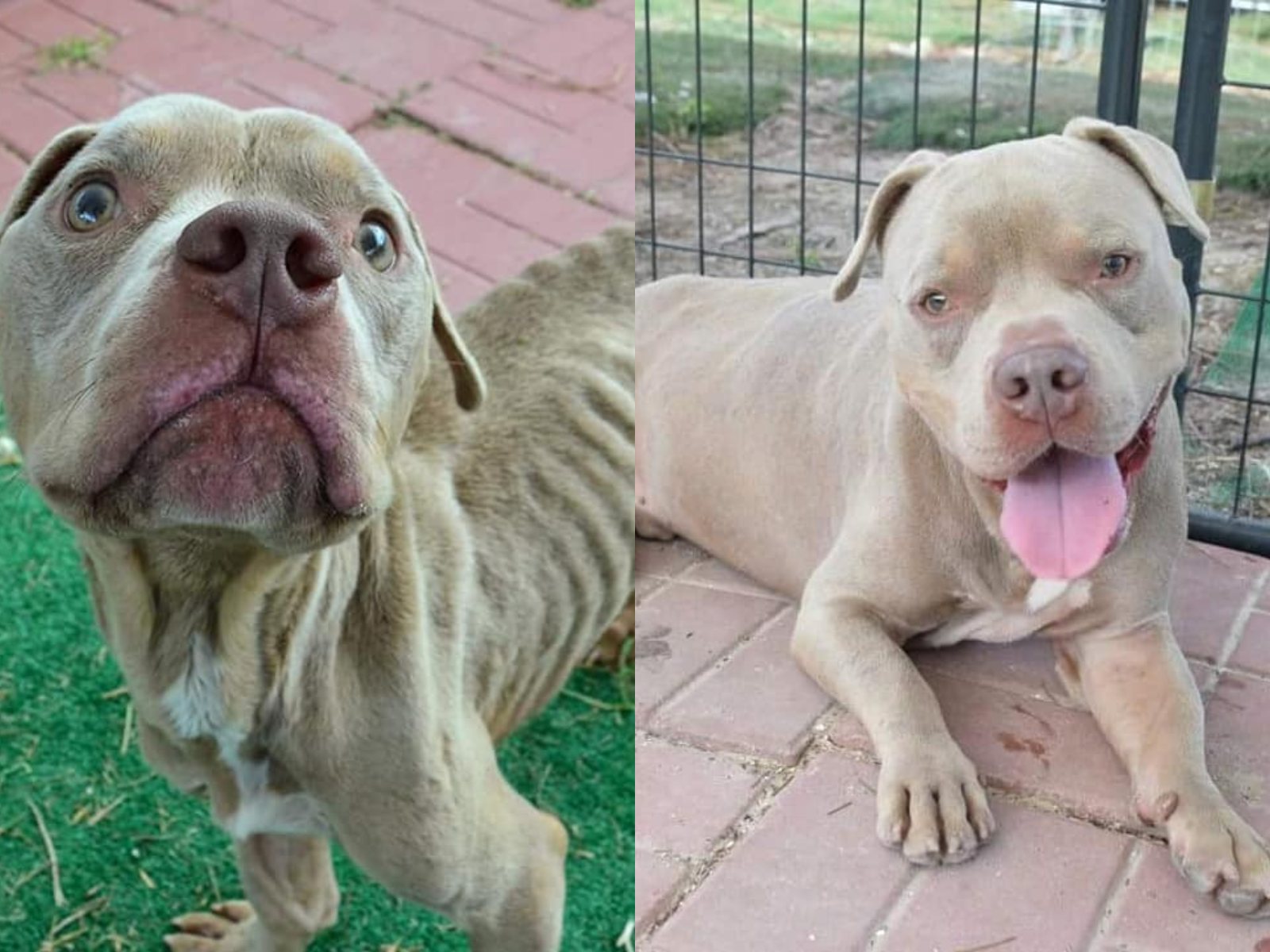 Just in case you were feeling down, remember that there is good in this world – good dogs, that is.

There will never be a shortage of pups in need of a good home, and one of the best ways to show compassion to a doggo in need (and to gain a new best friend) is to adopt.

Prepare to get misty-eyed by the heartwarming transformations these 16 rescue dogs underwent after being rescued by loving owners.

Lia Ryerson contributed to a previous version of this post.

After getting rescued, Dice is “one happy, healthy, thick boy these days.”

Dice was found locked inside a cage in Florida, abandoned, in early November 2017. He was immediately brought to Feeling Fine Canine and Equine Rescue. He weighed 30 pounds at the time, and should have weighed at least twice that.

But now, he’s thriving. “Dice is amazing. When he first came to our rescue he was weak and could hardly stand. After weeks of rehabilitation care and love, he absolutely blossomed and doesn’t stop smiling,” Feeling Fine told Insider.

Look at the bright and happy puppy-smile that Jax, a doodle mix, is serving now that he lives in a healthy home. 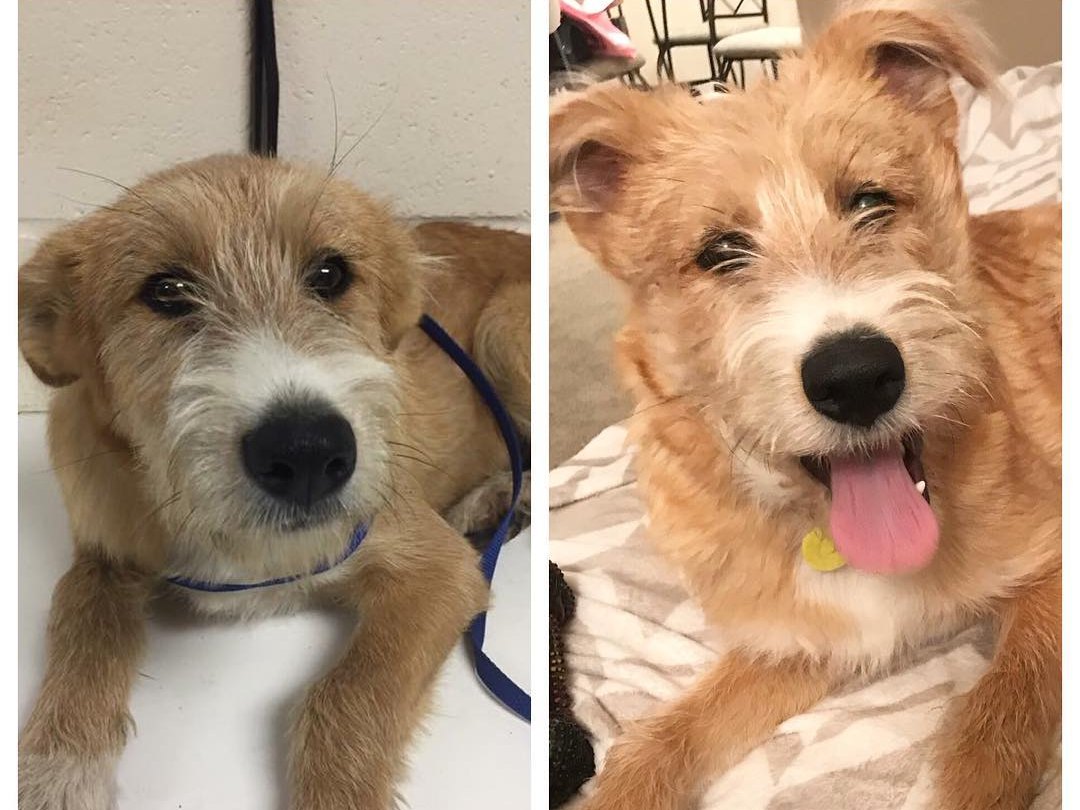 Click here for the most popular dog in every state.

Rosie is a sweet and happy rescue pup from Texas. 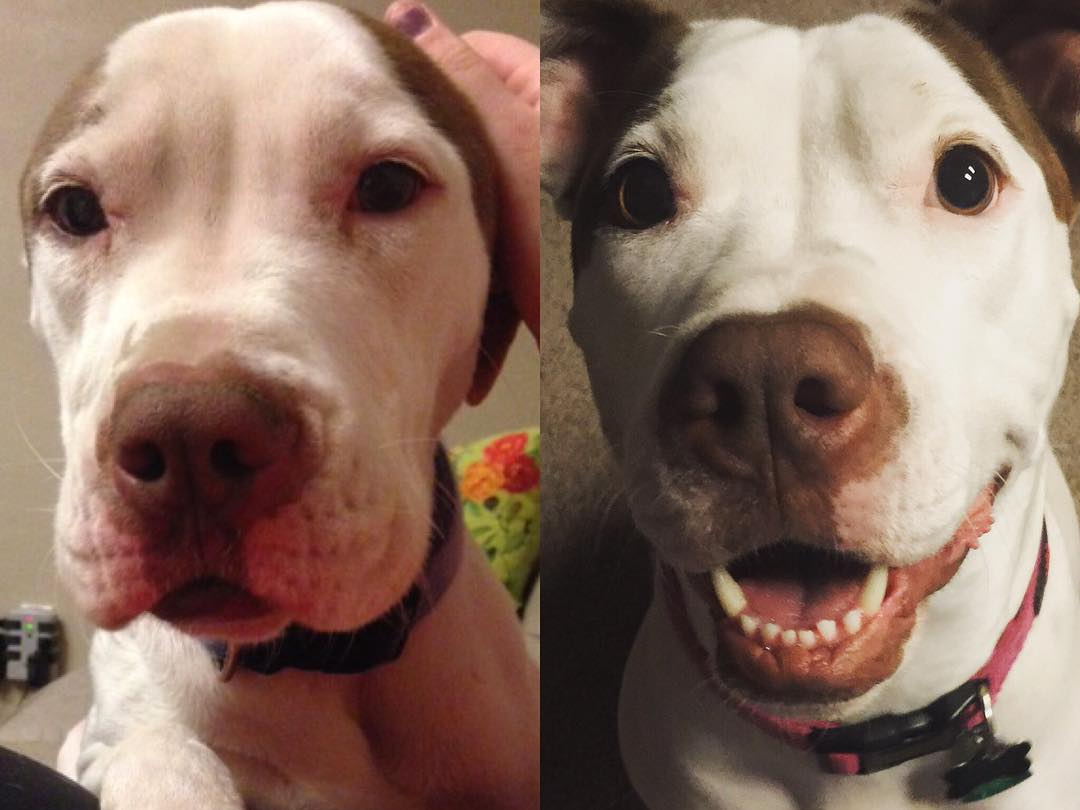 Click here for photos of the most perfect dogs in the world.

Millie was underweight and terrified when her owners first brought her home. But after some dedicated love, she gained 30 pounds. 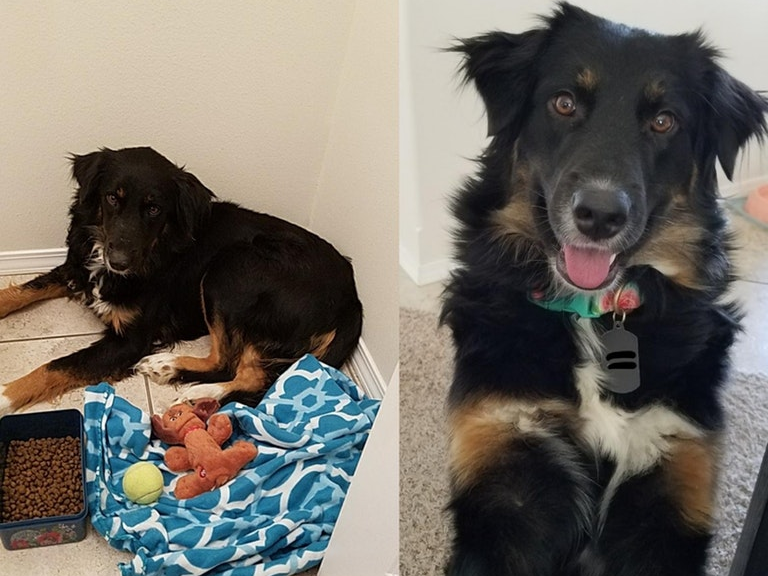 These pictures of dogs before and after their haircuts will make you melt.

Baker, a happy black terrier mix, has gained 15 pounds and a gigantic smile since getting adopted. 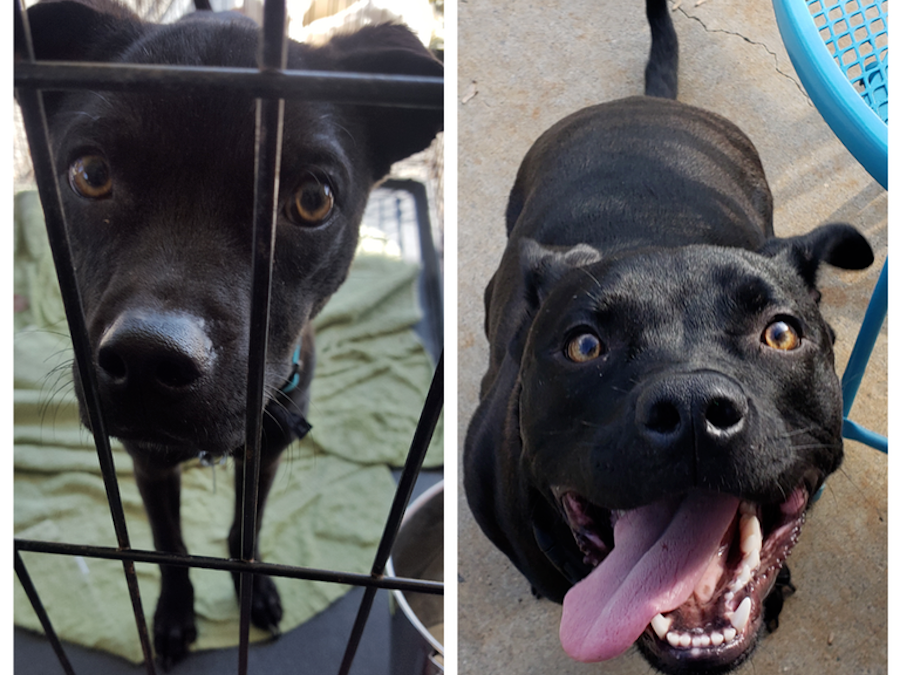 Click here for our ranking of the best dog breeds.

Penny went from being a 7-pound baby who was afraid to go outside to a loving, healthy dog. 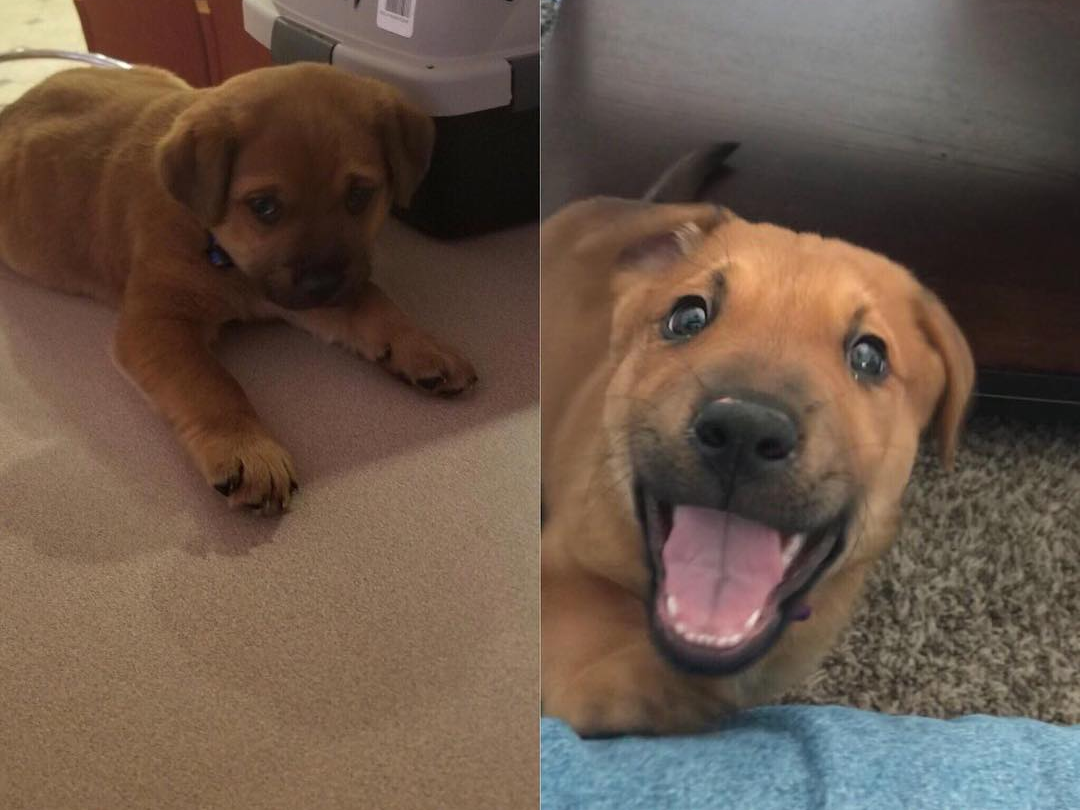 Check out this dog who photo-bombed Google Street View in Japan.

Yoshi went from being a fearful 43-pound pup to an energetic, 57-pound good boy. 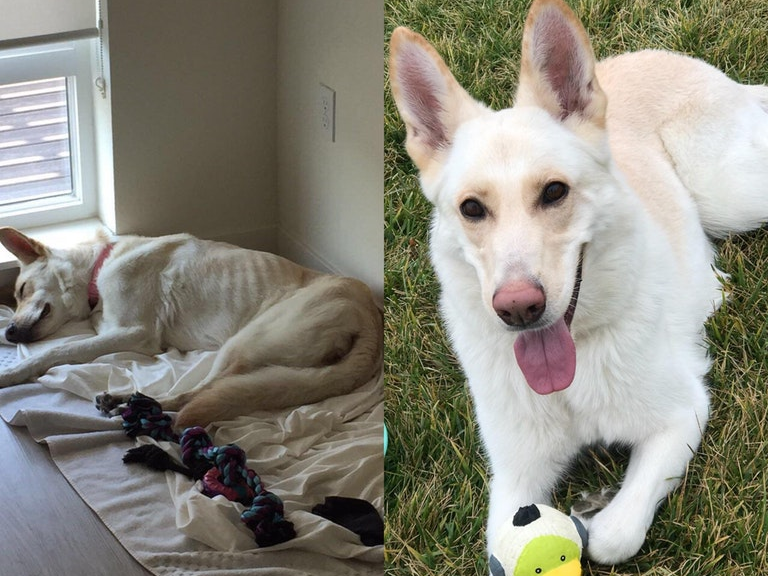 Click here for the most popular dog breeds in the US.

Harper used to be a scared and scruffy little dog. Post-adoption, however, Harper transformed into a happy and trusting pup. 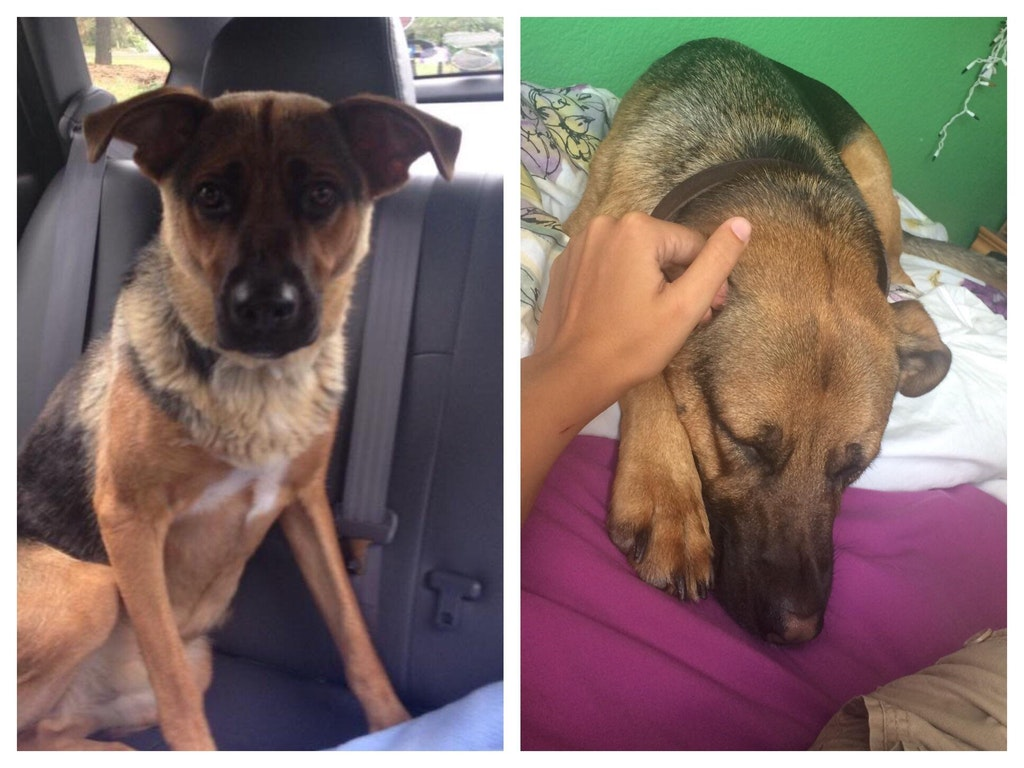 Hank, a schnauzer and shih tzu mix, is described by his owner as being “the happiest baby.” 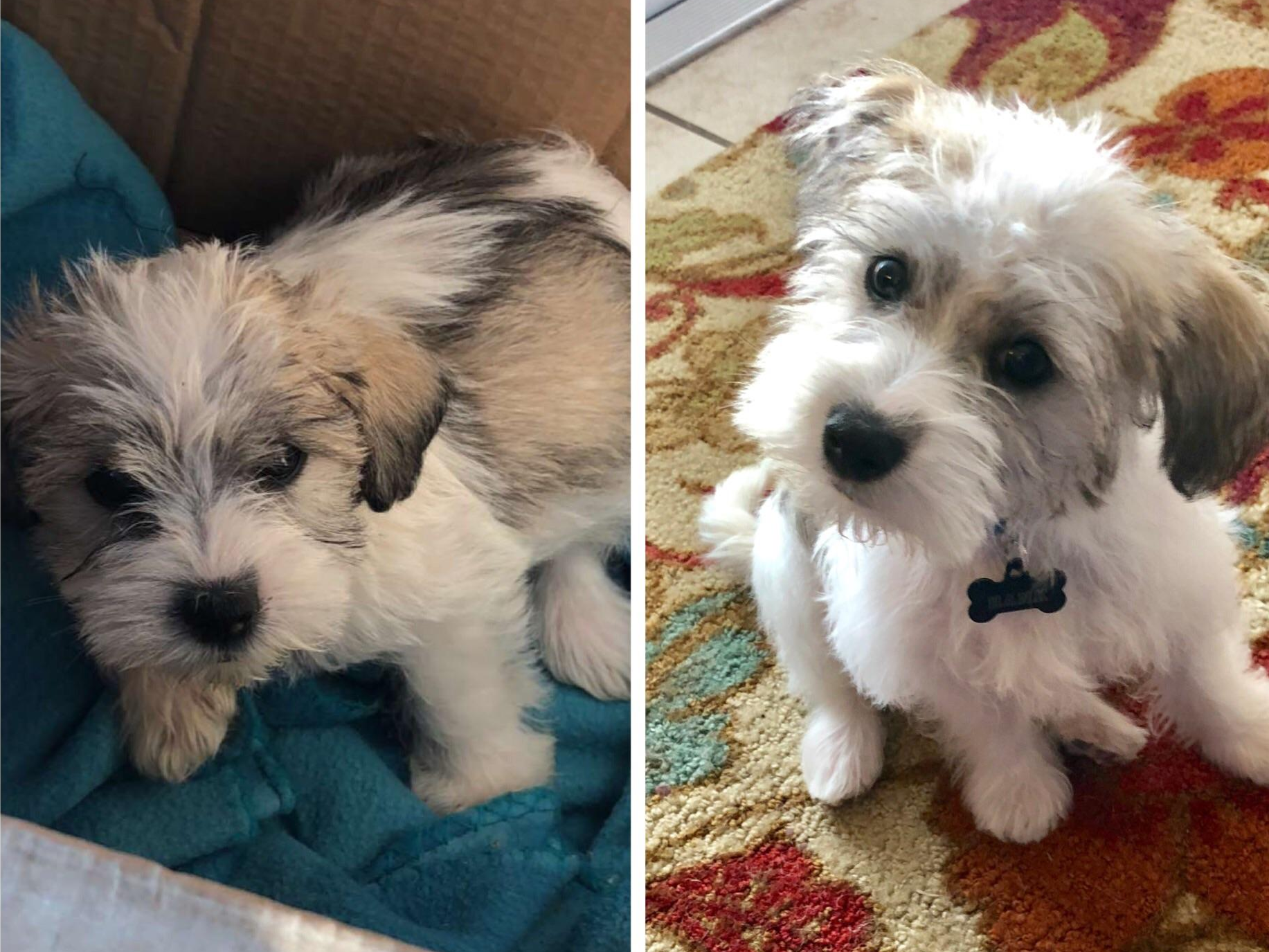 Some dogs look like humans – and there’s a scientific explanation for that. 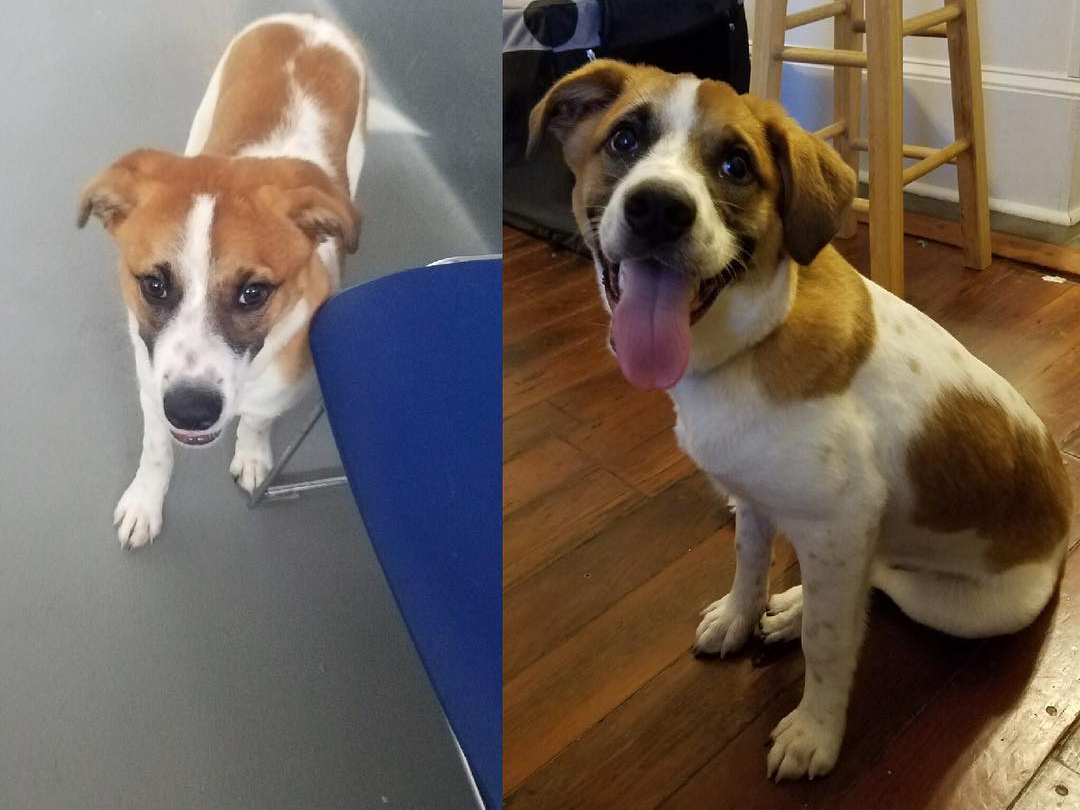 Click here to see pictures of the adorable dogs UPS workers meet on their route.

One thing is for sure: Pink and green are Mimi’s colours. 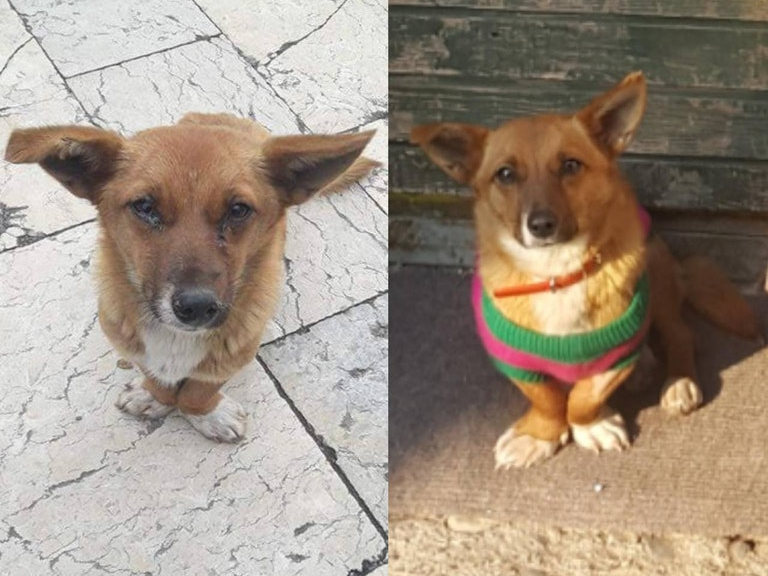 Click here to see which dog to adopt based on your personality type.

Bodie, a rescue dog from Chicago, is all smiles after getting adopted by his owner, Julie. 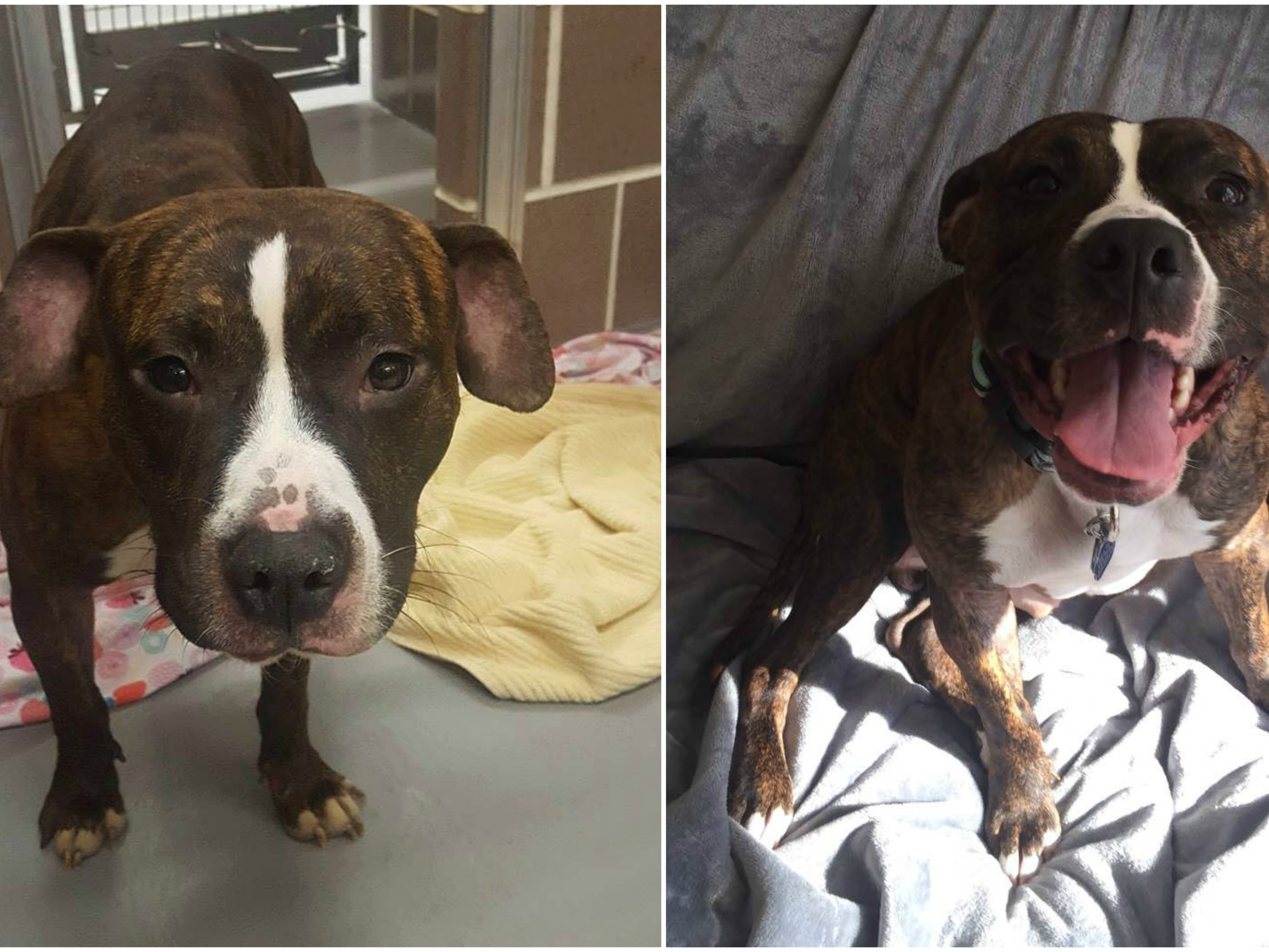 Mary Jane, an American pit bull terrier, was in the pound for two months before she was adopted. 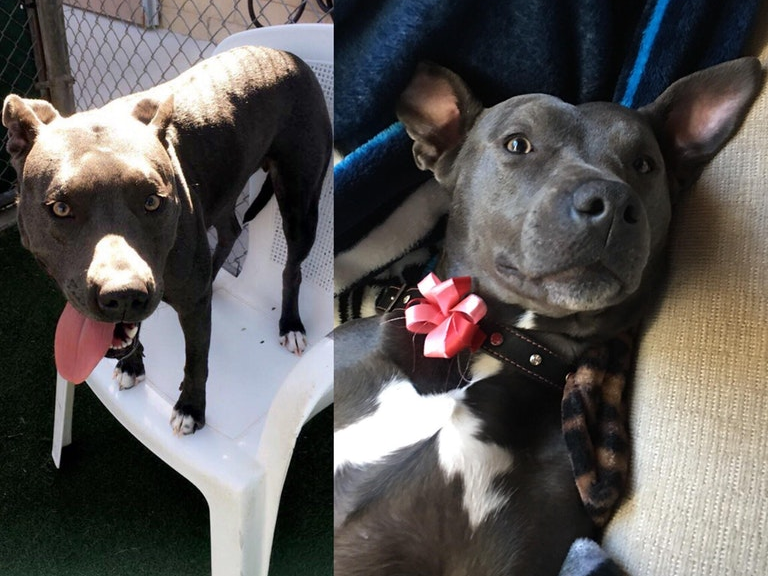 Pit bulls are often subjected to unfair treatment, though they are extremely sweet. Just look at this proud pit bull mama and her babies.

Virginia, or Ginny, the pit bull was tired and scared, but after getting adopted, her owners describe her as “glowing, hydrated, and thriving.” 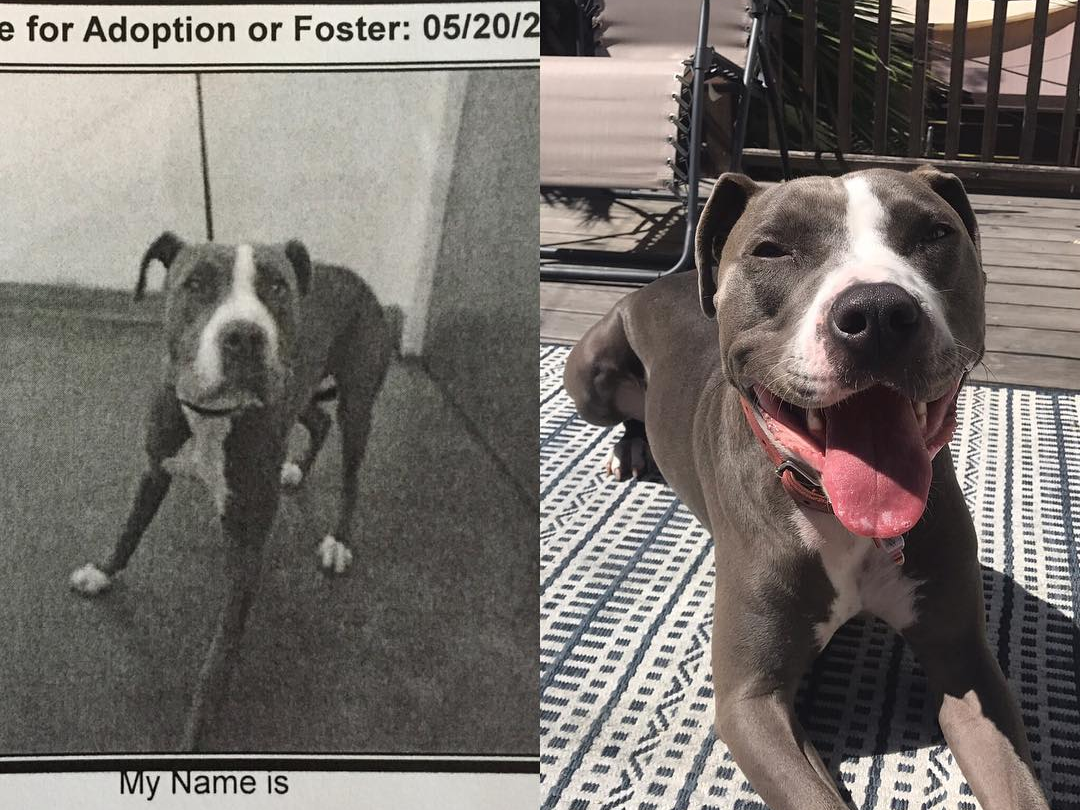 That is the face of total bliss.

Chuck was adopted from the Apple Valley Municipal Animal Shelter in March 2018 — now his sad eyes are gone. 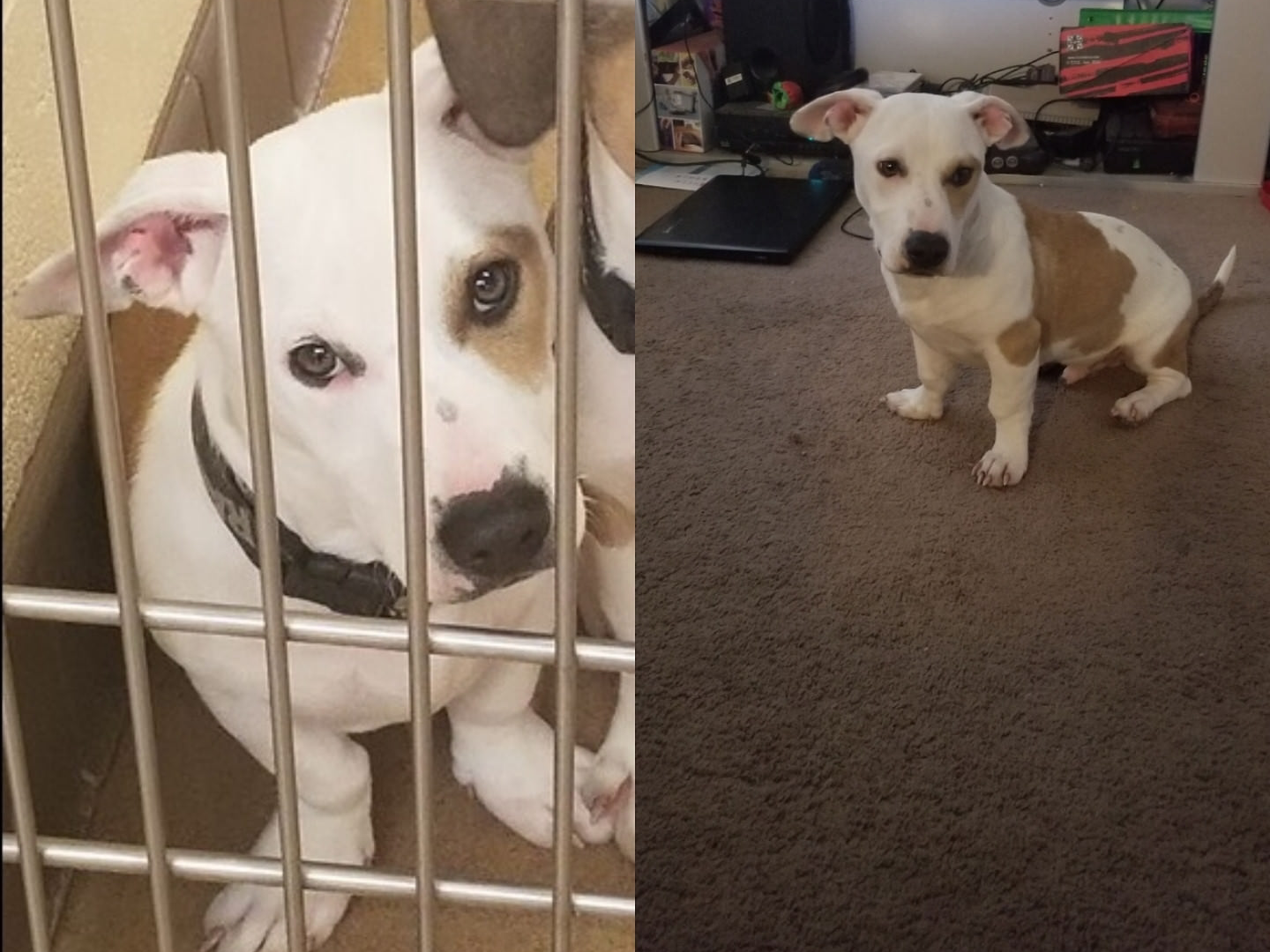 Want to adopt a pet? The ASPCA has shelters all over the country.

After surviving neglect, mange (a skin disease caused by parasitic mites), and heartworm, Waffle is now happy and healthy. 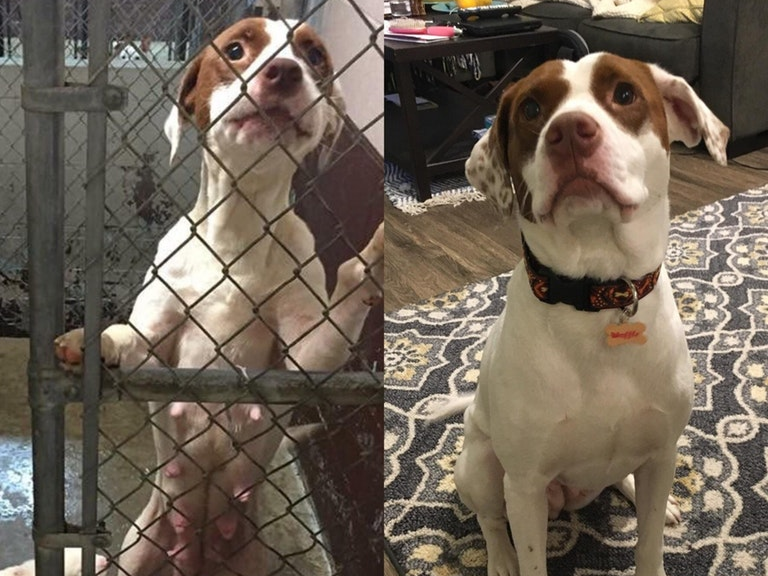 Waffle is living his best life.