San Francisco is being hailed as the city that flattened the curve. Doctors from 3 Bay Area hospitals describe an 'eerie' quiet. Jeff Chiu/AP PhotoA man wearing a mask walks in Alamo Square Park in front of the ‘Painted Ladies,’ a row of historical Victorian homes, in San Francisco on April 19.

As New York hospitals started running out of ventilators and nurses donned garbage bags as personal protection, emergency rooms in San Francisco girded themselves for a similar fate.

But then came an unanticipated lull.

“We expected right now to be some version of what was happening in New York, and instead what we’ve been left with is a hospital that’s about half-empty,” Dr. Jahan Fahimi, the medical director of the ER at the University of California San Francisco, told Business Insider.

Six Bay Area counties were the first in the US to impose lockdowns, closing nonessential businesses and instructing residents to stay home starting March 16. At the time, San Francisco had confirmed 40 coronavirus cases, and neighbouring Santa Clara County – where officials identified the first COVID-19 case in the Bay Area in January – had more than 130. California followed suit with a statewide shelter-in-place order, also the US’s first, three days later.

“We were paralleling other places like Italy,” Dr. Ian Brown, a physician and assistant director at the Stanford Department of Emergency Medicine, told Business Insider. (Stanford is in Santa Clara County.) “Our concern was, of course, being overwhelmed, running out of places in the hospital, running out of ventilators.”

He added, “My greatest fear when this all started was just how simply quick it was moving.”

But five weeks later, the Bay Area’s epidemic curve appears to have flattened. San Francisco has reported just 1,400 coronavirus cases (though the actual number is probably higher because of early limits in testing capacity). Emergency rooms have plenty of beds and ventilators. Doctors are taking time off, or flying to New York to help there.

The flood of cases they feared never came.

“When you’re walking through the halls of the hospital, it feels a little bit eerie at times,” Dr. Sam Shen, a physician in Stanford’s emergency department, told Business Insider.

Many experts have credited the Bay Area’s success so far to its early shutdown.

But Bay Area doctors say this could still be the calm before a drawn-out storm. So they’re using the breathing room to turn their gaze to the year ahead and plan for the surges of infections it could still bring. On Monday, the six counties that first went into lockdown announced that the policies would extend through at least the end of May.

A ‘reprieve’ from normal hospital crowding COVID-19 hospitalizations in San Francisco started to climb in early April, but the number of patients with confirmed or suspected coronavirus cases in hospital beds topped out at 121. Since April 17, that number has hovered between 97 and 112.

One of UCSF’s two triage tents was still sitting unused in its parking lot as of April 17. Stanford had not tapped into its backup store of supplies. Zuckerberg San Francisco General Hospital has even seen a small drop in COVID-19 patients, with 20 or so in the hospital at any given time.

“My fellow citizens have been so wonderful in staying in isolation when they should, staying social distancing, quarantining when needed, that it really has a palpable difference on our business,” Brown said. “It’s made our jobs much more tolerable. It makes it easier for us to care for people. And I hope that, in turn – we don’t have the numbers yet – I hope that, in turn, this translates into better outcomes.” 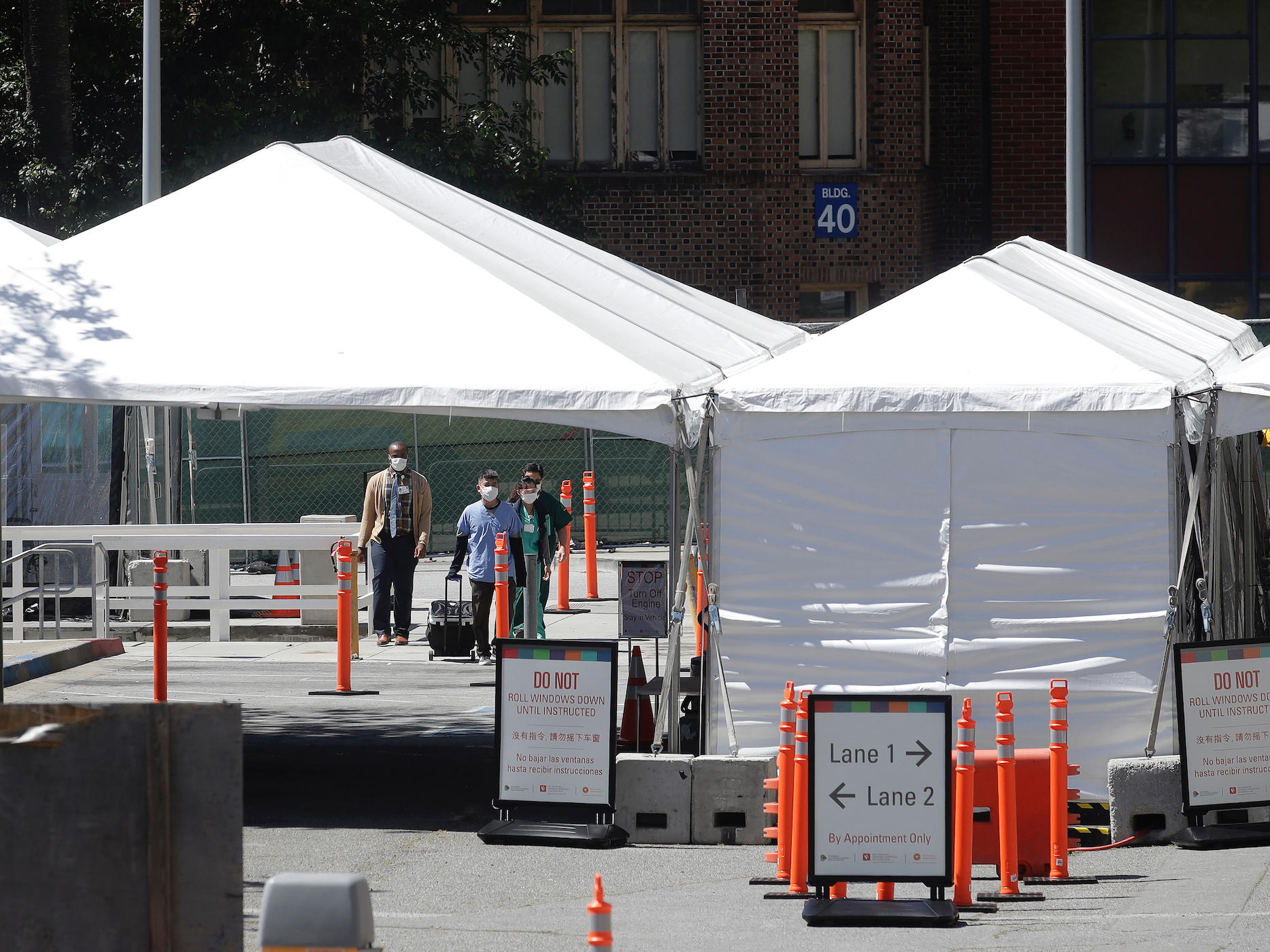 Fahimi said that social-distancing rules worked so well that UCSF had to make a new plan for its staff.

“We had built out a scheduling platform whereby we’d have more physicians available to work, and instead we have given more physicians time off than we had anticipated,” Fahimi said.

The ER is unusually empty, he added, so they sent 12 physicians and eight nurses to New York City.

“While it’s very nice from one standpoint, whereby we get a little bit of a reprieve from the chaos and the crowding that we were exposed to pre-COVID, now, unfortunately, we have this constant sense of anxiety, because as emergency care providers – both nurses and doctors – we don’t do well sitting around,” Fahimi said. “We want to be doing something. We want action.”

The quiet has also raised another question: Where did everybody go?

“Where are all the stroke patients? Where are all the heart-attack patients?” Fahimi wondered. “There’s a little bit of a worry that many of these patients are still having the events that they were having beforehand, but now they’re alone.” The Bay Area doctors noted, however, that hospitals had changed protocol to make the most of face-mask supplies. At SF General, nurses and doctors no longer change their masks when they move from room to room. UCSF workers are reusing them as well.

“Two months ago, that would have been sort of blasphemy from an infection-prevention standpoint,” Fahimi said. “But now it’s just commonplace.”

The new system, he added, is that doctors wear one mask “for the duration of your shift – which is incredibly uncomfortable, by the way.”

“Then at the end of your shift, you carefully take that N95 off, and you store it, without crushing it or getting it disformed, inside of a paper bag,” Fahimi said. After four days, any amount of virus on the mask in the bag should be “negligible,” he said. Then he can reuse it for another shift.

A runaway outbreak in a nursing home, jail, or shelter could still tip the scales David Ryder/Getty ImagesHealthcare workers transport a patient on a stretcher into an ambulance at the Life Care Centre of Kirkland in Washington on February 29.

The doctors are still hesitant to declare victory over San Francisco’s first wave of infections. Any new spike in cases could send the Bay Area careening above its recent peak, especially once the government begins to lift social-distancing rules.

“We won’t know where the peak is until we’ve passed it,” Fahimi said, adding that “because we’ve been so good about preventing the spread of the virus, we have effectively no herd immunity.”

Herd immunity is the protection a population gains when enough members become infected and develop antibodies. When a critical mass of people are immune, it’s difficult for the virus to spread, thereby conferring protection to the entire group. But the US overall is likely nowhere near the minimum 50% population immunity it would need to gain that protection against the coronavirus: Only an estimated 2% to 3% of Americans have been infected.

“At any point, an outbreak within a nursing home, within a homeless shelter, within a jail – all of which have kind of already happened – could reignite the fire,” Fahimi said. “So we’re optimistic that the number of cases that we’re seeing is not spiking, but worried that it always could.”

Even a sudden return of the normal emergency patients – the heart attacks, strokes, and car accidents – could shock the hospital with a surge.

“Even though our volume is lower, it does give us time to prepare for the potential surge should that happen,” Shen said. “We sure are kind of maintaining an ever-ready state.” 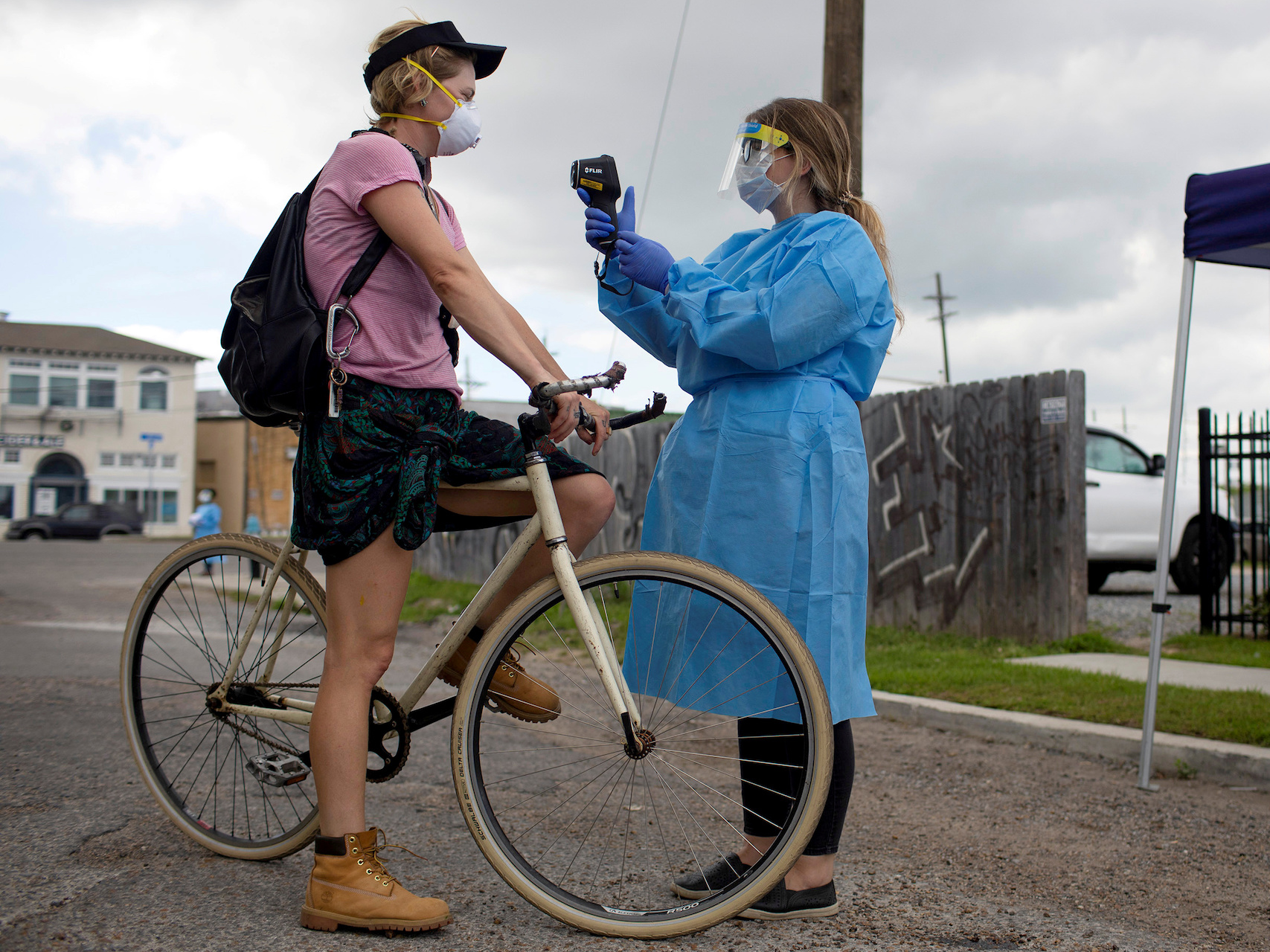 Kathleen Flynn/ReutersElena Likaj, the prevention-department manager at Odyssey House Louisiana, which runs a drive-thru COVID-19 testing site, takes the temperature of a person in New Orleans on March 27.

Gov. Gavin Newsom has not set a date to end California’s statewide lockdown, but he has laid out a plan for that eventuality.

“We know we’re going to get a second spike of patients as we start to reopen businesses, schools, all those kinds of things,” Fahimi said. “The question is: Is it going to be a wildfire, or is it going to be much more of a controlled burn?”

Dr. Lisa Winston, an epidemiologist at SF General, said she was still in and out of meetings for 12 hours a day, helping to draft plans to prepare for the next year of coronavirus infections.

“There’s, I think, hope that maybe the curve is being flattened, and then hopefully the surge won’t be as bad as was originally predicted,” Winston said. “There’s also the realisation that we are going to be living with this for a very long time.”

Winston is working to secure a supply chain for the hospital, as well as implement more robust testing and contact-tracing efforts. Experts have emphasised that once lockdowns lift, governments will need to closely monitor the spread of the virus via diagnostic tests, then find and isolate people who came into contact with those who tested positive.

“I really hope before we relax things that we have all the things in place that we need to detect any surges if they’re happening and to respond very, very quickly,” Winston said. “Our hospitals in San Francisco and the Bay Area are not at their maximum capacity, but if there was unmitigated spread, I think there is the possibility of being overwhelmed.”

Many epidemiologists also expect that local leaders may need to impose follow-up lockdowns once the virus starts to spread again.

“It’s going to be a slow, long battle until we as a country are better at both isolation and better at contact tracing,” Brown said. “It’s not a sprint; it’s a marathon. So we’re ready.”