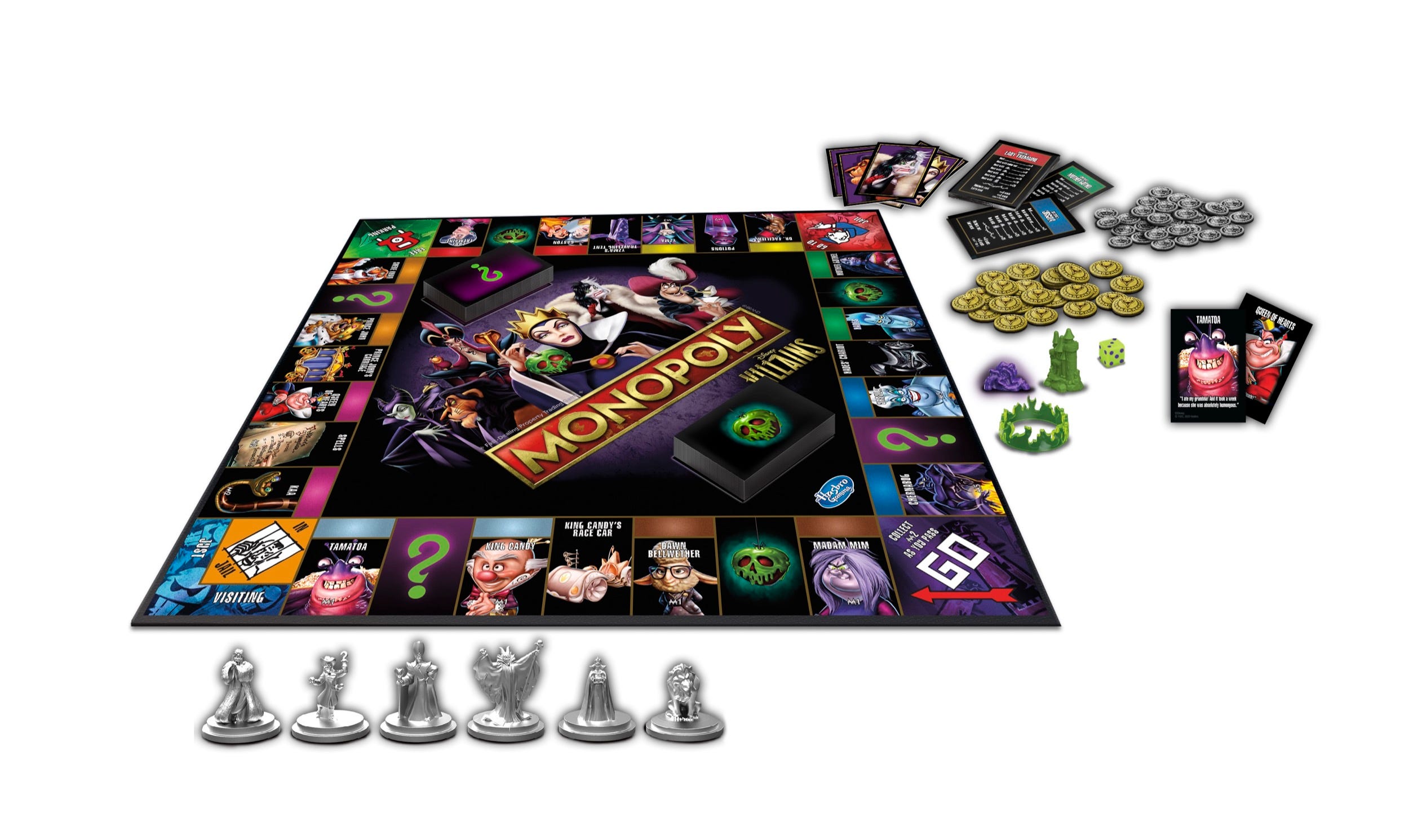 Courtesy HasbroHere’s how the ‘Disney Villains’ edition of Monopoly looks. It comes with six silver tokens, one die, and coins instead of cash.

Be prepared. If you’ve been itching to play as your favourite Disney villains in a board game, Monopoly has you covered.

Hasbro just released a Disney Villains edition of the classic board game and it encourages fans to scheme and steal to make the game extra devious. 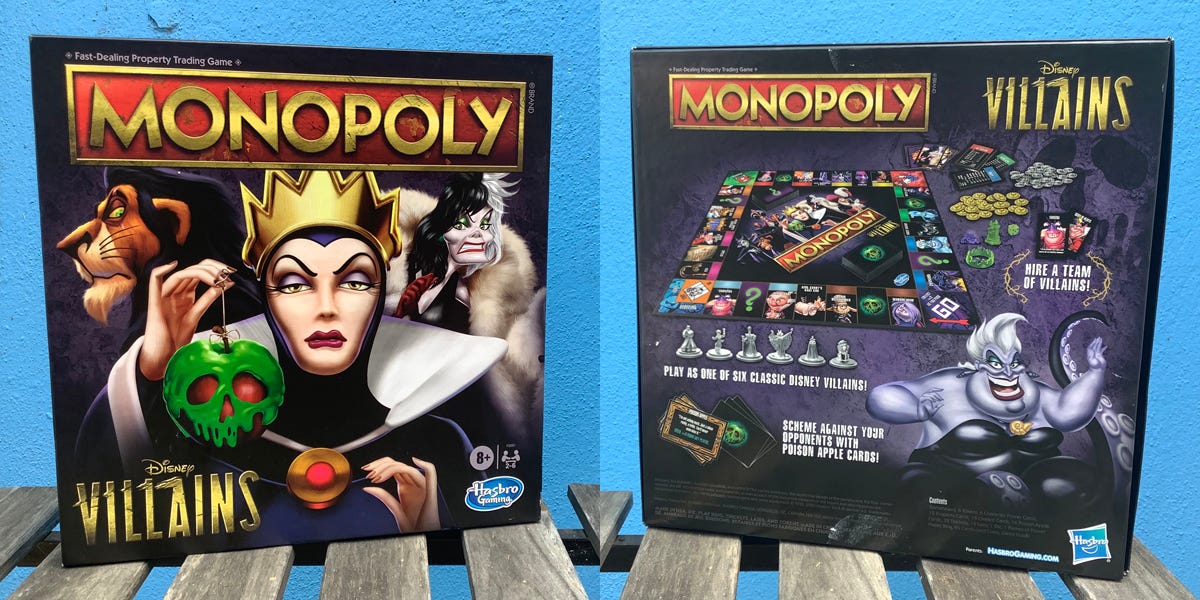 Kirsten Acuna/InsiderHere’s how the front and back of the Disney Villains Monopoly edition looks.

“Villains are an integral part of Disney movies and are often the root of what makes each movie mysterious and exciting. We know there is a strong fanbase for these characters and we are thrilled to be able to celebrate Disney Villains in a way fans will appreciate and love,” senior director of global brand strategy and marketing at Hasbro, Chedney Rodgers, told Insider.

“When picking which villains to include, it was not an easy decision,” Rodgers said of how they landed on these six characters. “We wanted to make sure we were including the classic fan favourite characters, that consumers of all ages would recognise and embrace. Pulling from the most iconic and memorable characters, we made a diverse and balanced selection that could best translate into fun tokens for gameplay.”

Courtesy HasbroHere’s a better look at the full game board which features villains new and old from Tamatoa and King Candy to Madam Mim and Chernabog.

This isn’t the first time Hasbro has released a villains’ edition, but this one is revamped, more interactive, and has a few twists to keep you on your toes. If you’re upset you can’t play as another Disney villain, don’t worry. Characters ranging from Ursula and King Candy to Gaston, Yzma, and even Madam Mim make appearances on the board.

In this game, instead of purchasing properties, you’re buying other villains’ loyalties to join your ranks and build the best group of Disney baddies. A new set of cards asks players to steal money, property, or even send another player to jail. If you’re not paying attention, you could get swindled out of some cash. If you don’t notice a player land on your property, they can get away without paying rent.

This edition also does away with the standard Monopoly bills. Instead, it opts for gold and silver coins decorated with Jafar’s snake and the Evil Queen’s crown. You still want to have the most money by the game’s end, but the gameplay could all be affected from the moment you choose your token.

Choose your character wisely. Each one has a different power you can activate during gameplay. 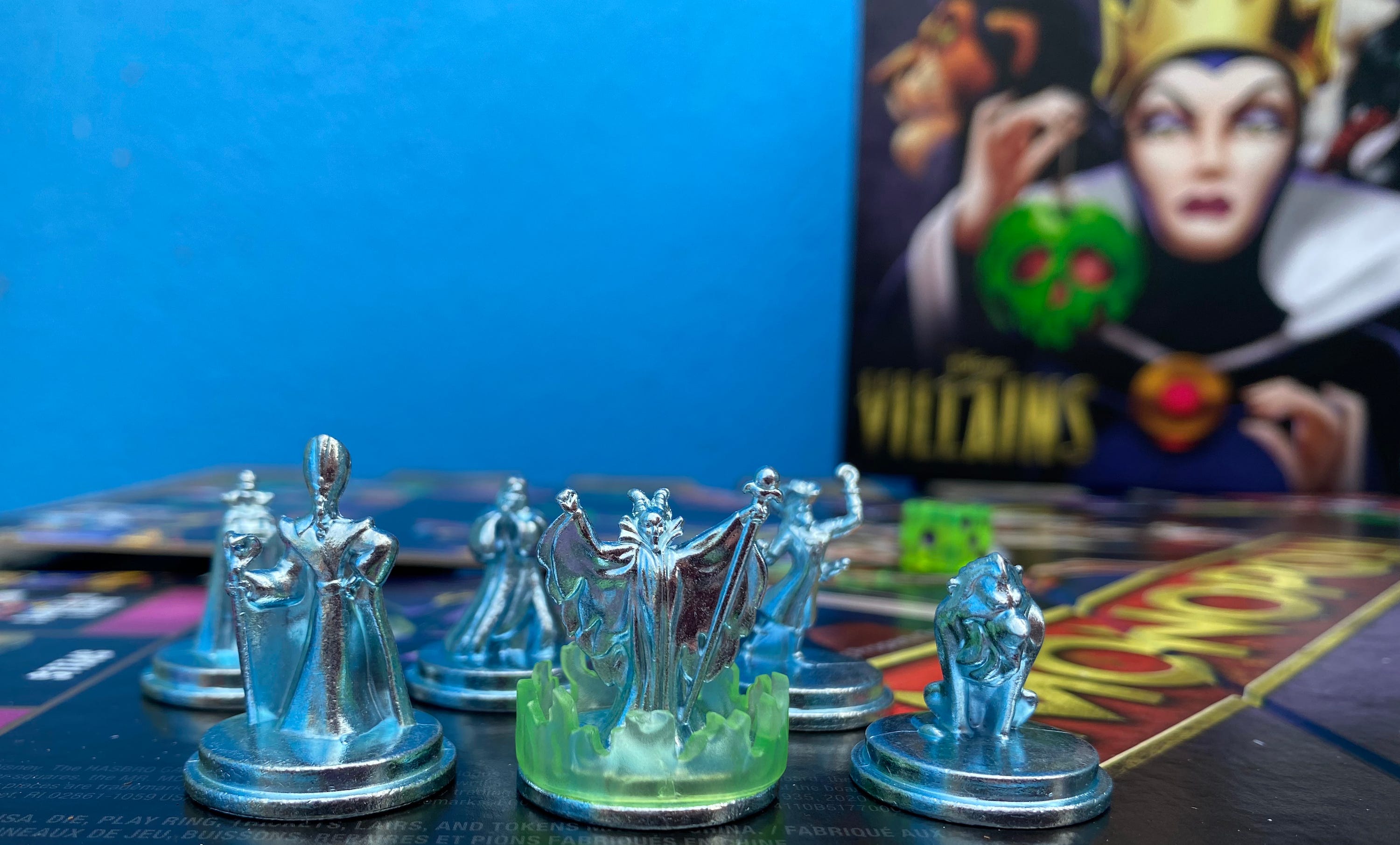 Kirsten Acuna/InsiderHere are the six playable tokens in the Disney Villains edition of Monopoly.

Before you reach to grab your favourite Disney villain, you may want to think twice. Each of the six character tokens has a unique ability you can activate during the game.

In addition to the character token, you’ll receive a card which tells you your character’s power. The powers range from stealing different amounts of Monopoly money to re-rolling the die if you’re not happy with your roll.

Hasbro, Kirsten Acuna/InsiderHere are the six character cards. The back reveals their power.

Here are all of the powers:

Although you may be apt to grab Scar or Jafar, strategically speaking, it may be less likely to use your power if you’re playing as one of those two characters.

How do you use these powers?

Any time you pass “Go,” in addition to collecting two Monopoly coins, you take control of the Flames of Power ring.

Don’t wear it on your finger like we initially tried. Place the ring on your character token and your villainous reign continues until someone else passes Go or steals the power from you with a Chance or Poison Apple card.

What are Poison Apple cards? The new addition to the game replaces the Community Chest cards and allows you to steal money and property from other players. 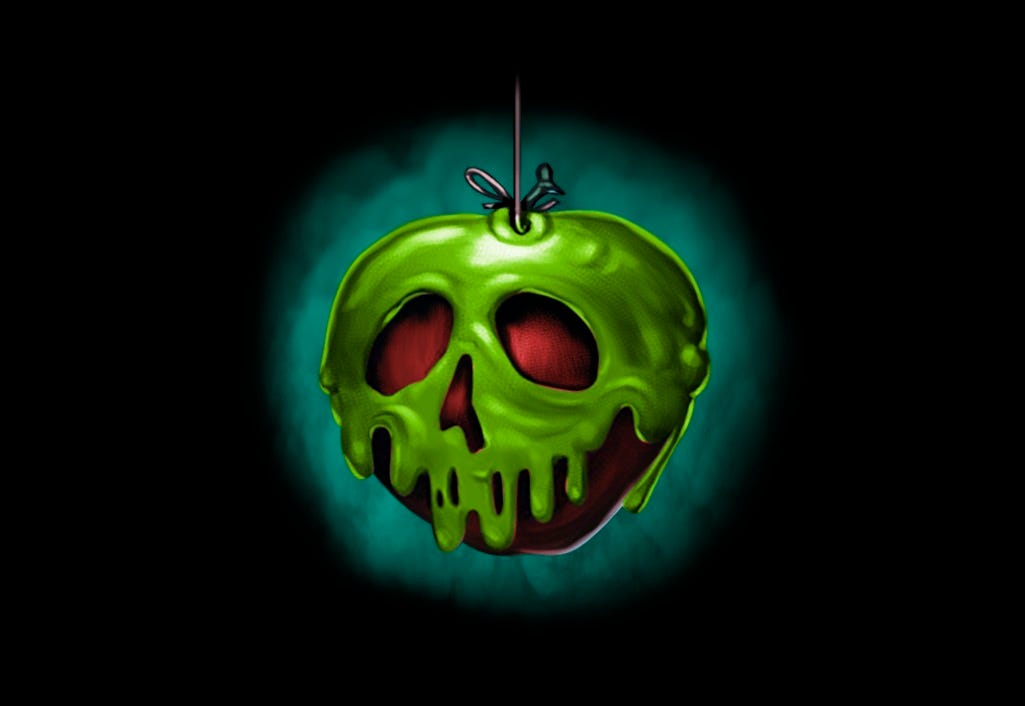 The best addition to the game are the 16 Poison Apple cards, a nod to the Evil Queen. Each card helps you advance in the game or mess with your opponents. Some cards allow you to steal property, money, or the Flames of Power ability from other players. Other cards let you force a player to move back three spaces, pay the bank money, or skip a turn.

Here are all of them: 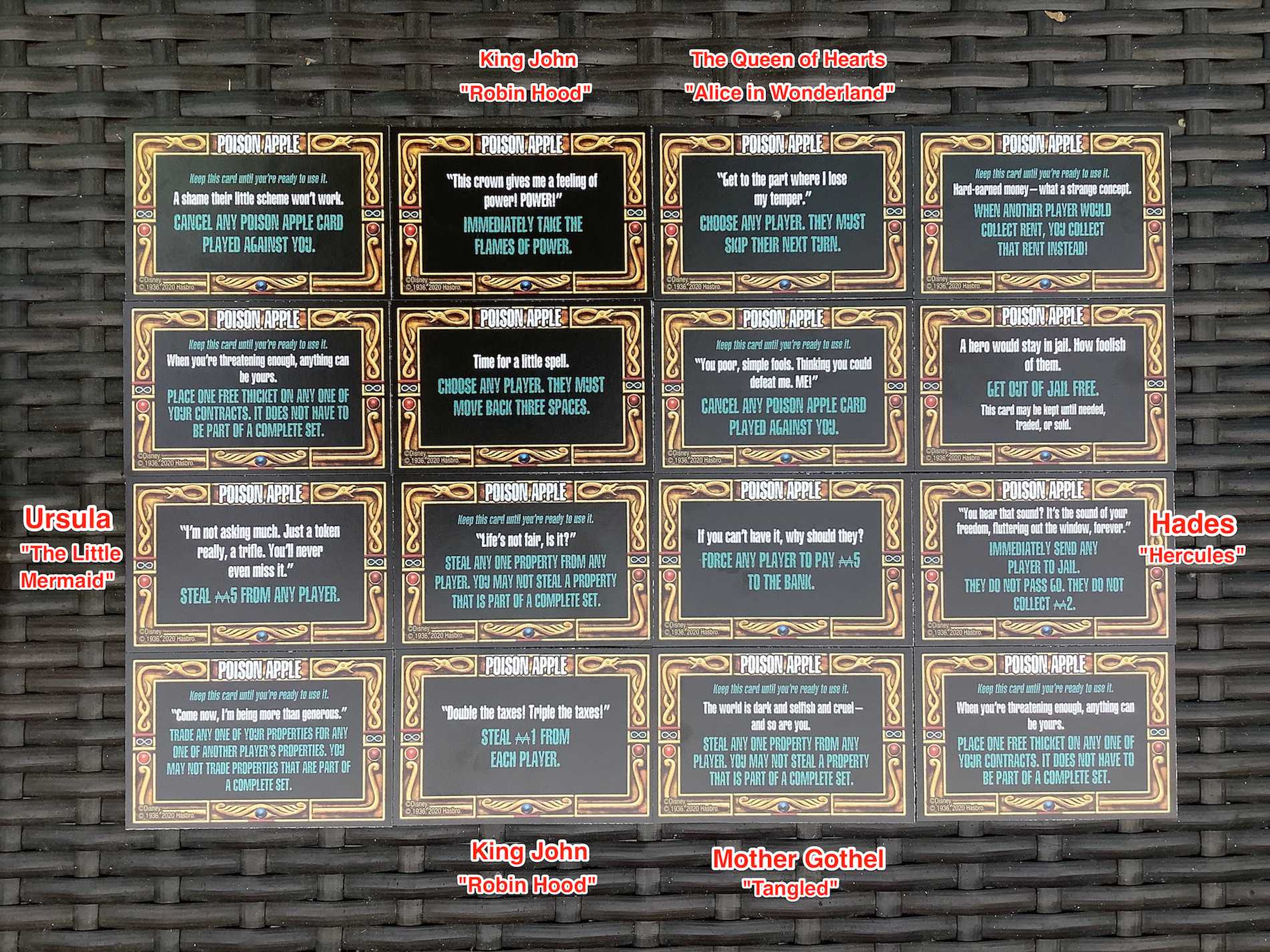 Kirsten Acuna/InsiderThere are some deep cut Disney references among the Poison Apple cards.

Both the Chance and Poison Apple cards are full of thoughtful touches and many of them give nods to popular phrases from other movies, which will make any Disney fan nostalgic. Among the most delightful that should make fans smile is a reference to Kronk buying Kuzco-themed footwear in “The Emperor’s New Groove.” 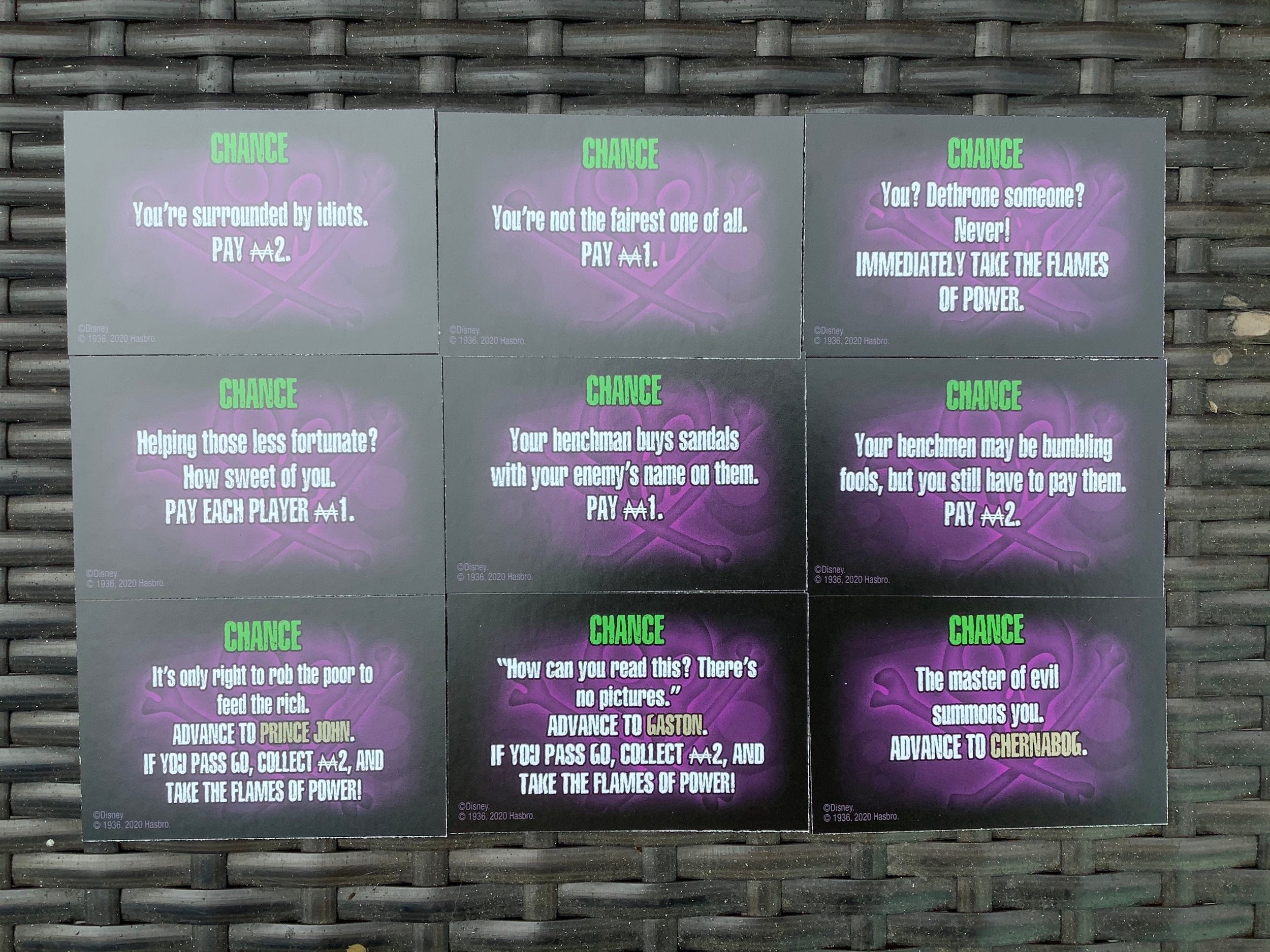 Kirsten Acuna/InsiderSome of the Chance cards are pretty funny to read if you get the Disney references to Kronk, Scar, the Magic Mirror, and more.

If the idea of playing Monopoly exhausts you, Hasbro engineered this edition to make it fast-paced. Longtime fans of the original will notice a few there are fewer spaces on the board and only one die. Rodgers tells Insider the condensed spaces help manage a shorter game. 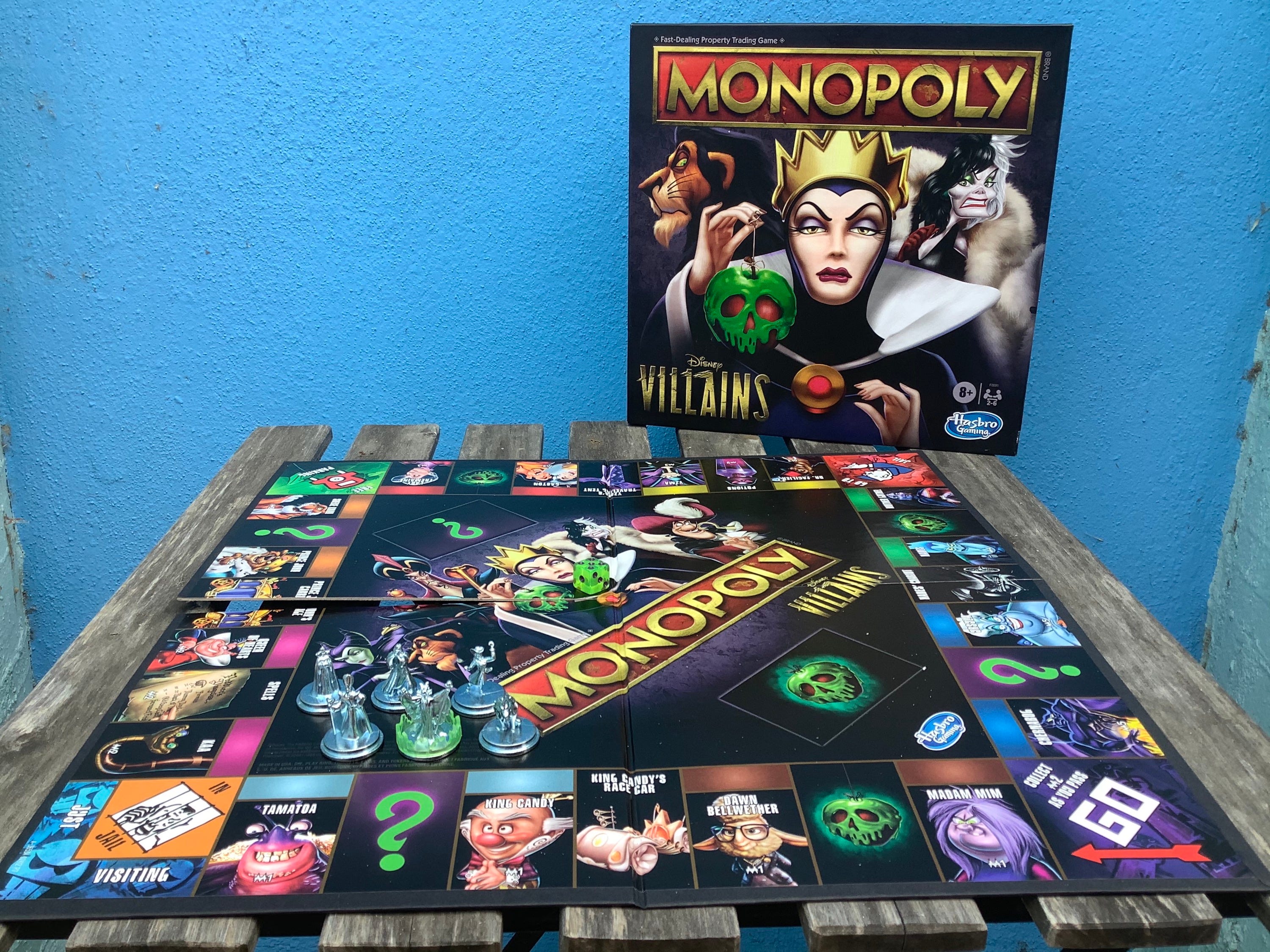 Kirsten Acuna/InsiderThis isn’t your mum’s Monopoly that will take hours on end to play.

If you land on a property space, you have to buy it. If you can’t afford it, you’re bankrupt and the game ends for you. The four vehicle spaces, which replace the railroads, allow you to travel to any space on the board. That’s handy if players are having difficulty landing on a particular property.

Disney Villains Monopoly is available now. You can order it here.