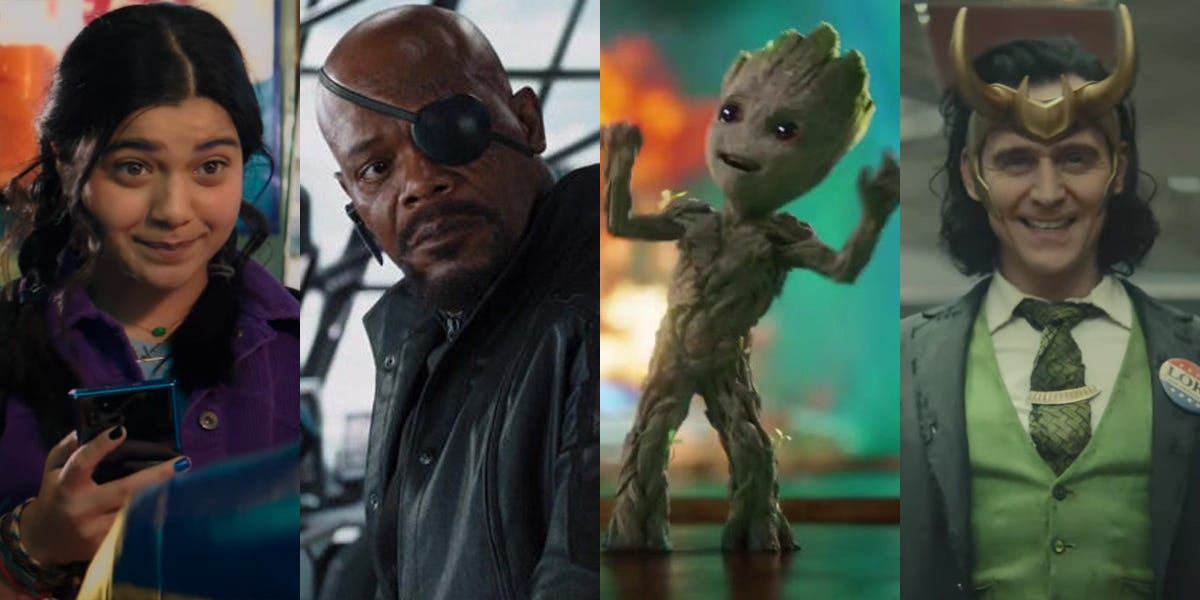 Marvel Studios‘Ms. Marvel,’ ‘Secret Invasion,’ ‘I Am Groot,’ and ‘Loki’ are some of the Marvel shows coming to Disney Plus.

A bunch of original Marvel series starring some of fans’ favourite characters are coming to Disney Plus.

If you’re invested in the Marvel Cinematic Universe, these shows are going to be a must-watch in conjunction with the next phase of Marvel movies.

“The cinematic universe weaves storylines and heroes and villains across 23 feature films to date,” Marvel Studios president Kevin Feige said during Disney’s 2020 investor day presentation. “With Disney Plus, we’re able to extend this way of storytelling to a new format, creating series that are connected to our theatrical releases, making the MCU more immersive than ever.”

Feige previously described these series as having the “same level of quality that you’ve come to expect from Marvel Studios” when the Disney Plus streaming service was first unveiled during an investor day in April 2019.

“These will be major storylines, set in the MCU, with ramifications that will be felt both through the other Disney Plus series we’re producing and our features on the big screen,” Feige said at the time.

Keep reading to see which Marvel characters are getting their own shows on Disney Plus.

“Marvel Studios: Legends” will revisit some iconic moments from the MCU. 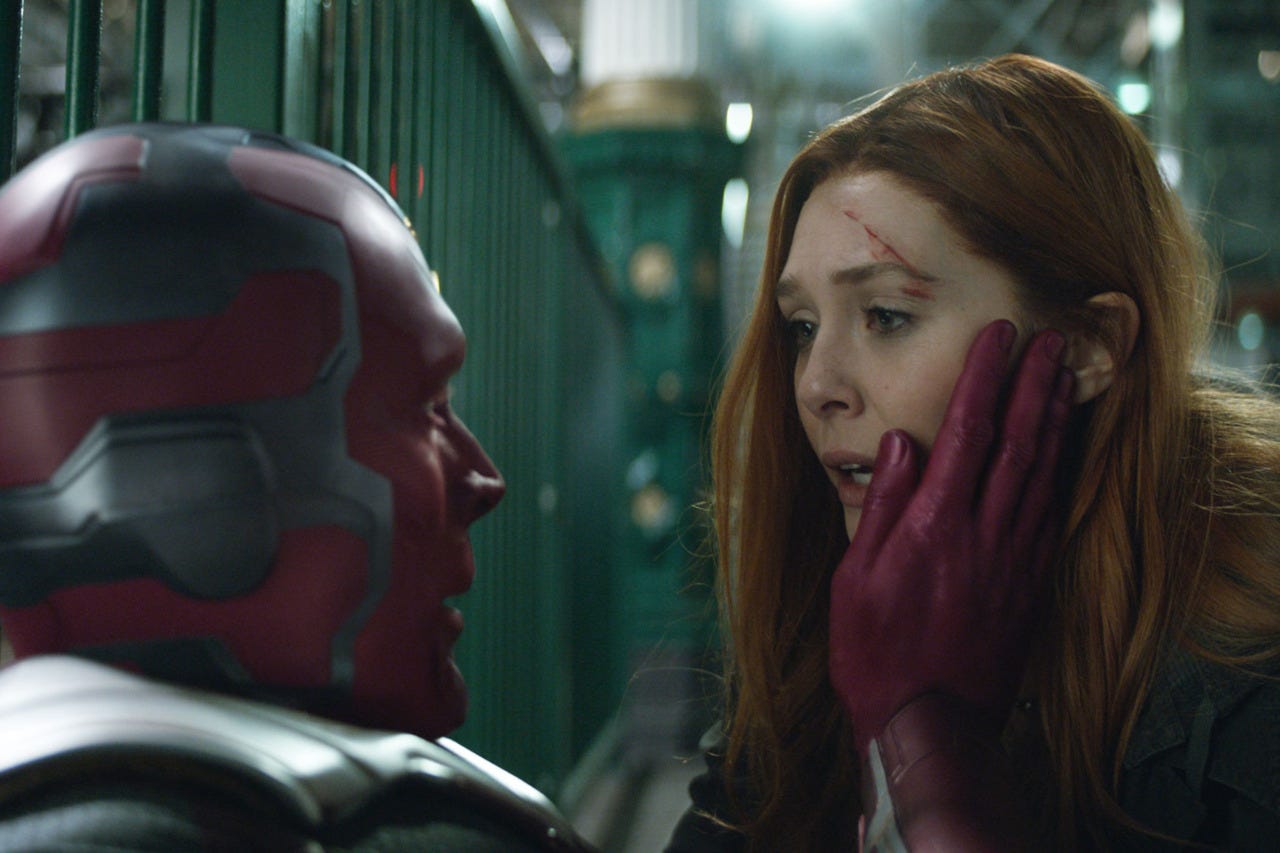 Marvel StudiosThe first episode will revolve around The Vision and Wanda.

According to an announcement by Marvel, the series will start off by revisiting a moment between Wanda Maximoff (Elizabeth Olsen) and Vision (Paul Bettany) just in time for their live-action Disney Plus series, “WandaVision.”

“WandaVision” will be the first live-action series, featuring Scarlet Witch and Vision. 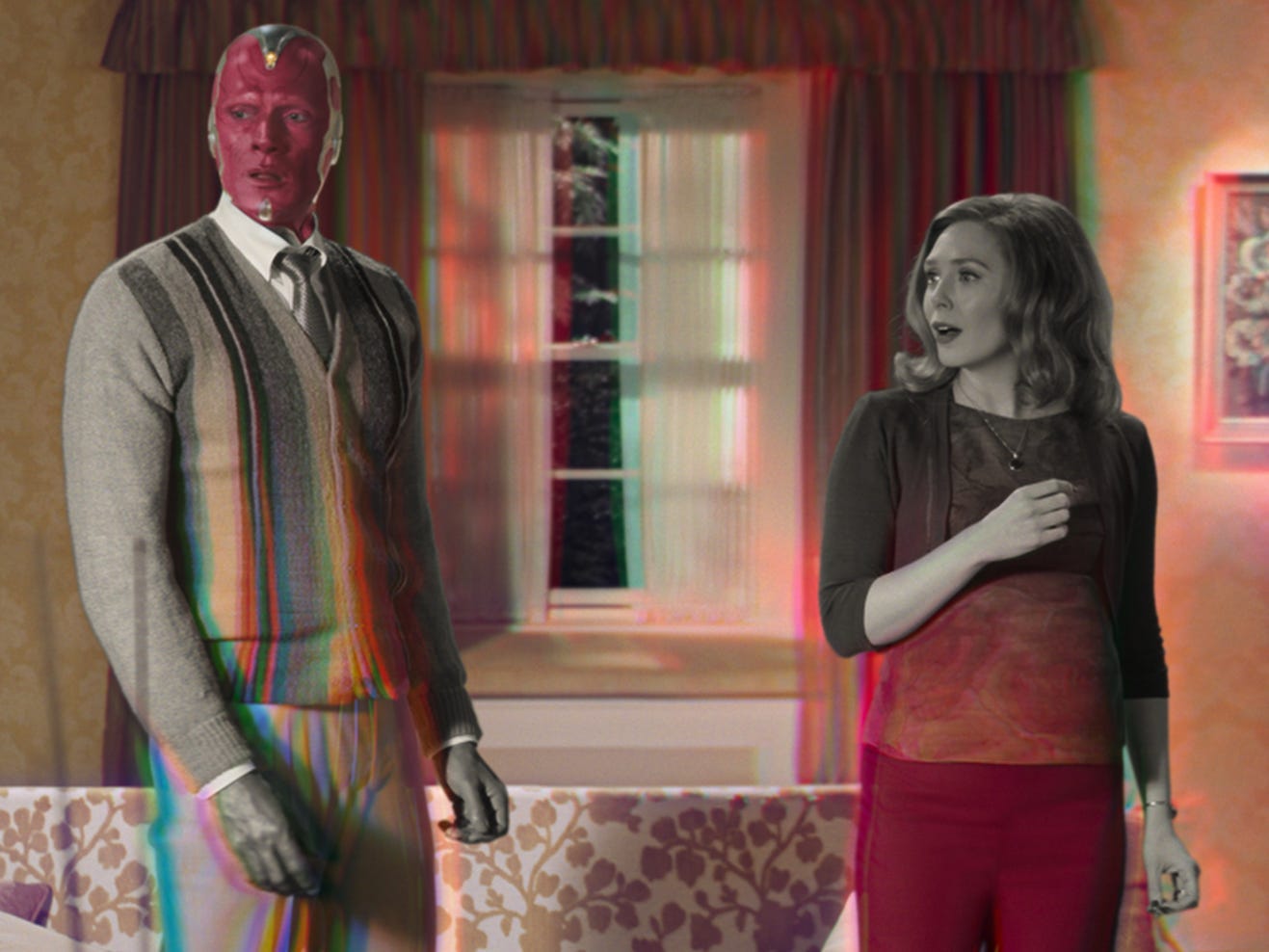 When it will be on Disney Plus:
January 15

Elizabeth Olsen and Paul Bettany will reprise their roles as Wanda Maximoff and the Vision, respectively, on the Disney Plus series. Feige described both as two of Marvel’s most powerful and complex heroes.

The first full trailer for the series shows the two attempting to live a suburban life as a married couple with twins. That seems a bit odd since Vision was “killed” in “Avengers: Infinity War,” so it will be interesting to see what the show does here.

In the comics, Wanda and Vision had twin boys. The interesting part is that their super-powered sons, Wiccan and Speed, become members of a superhero group named the Young Avengers, which may be the Disney Plus endgame down the line. We have yet to see whether they’re real or imagined in her mind.

Teyonah Parris joins the show as the grown-up version of Monica Rambeau from “Captain Marvel.”

You can watch the newest trailer for the series here.

“Falcon and the Winter Solider” will bring together two of Captain America’s closest friends. 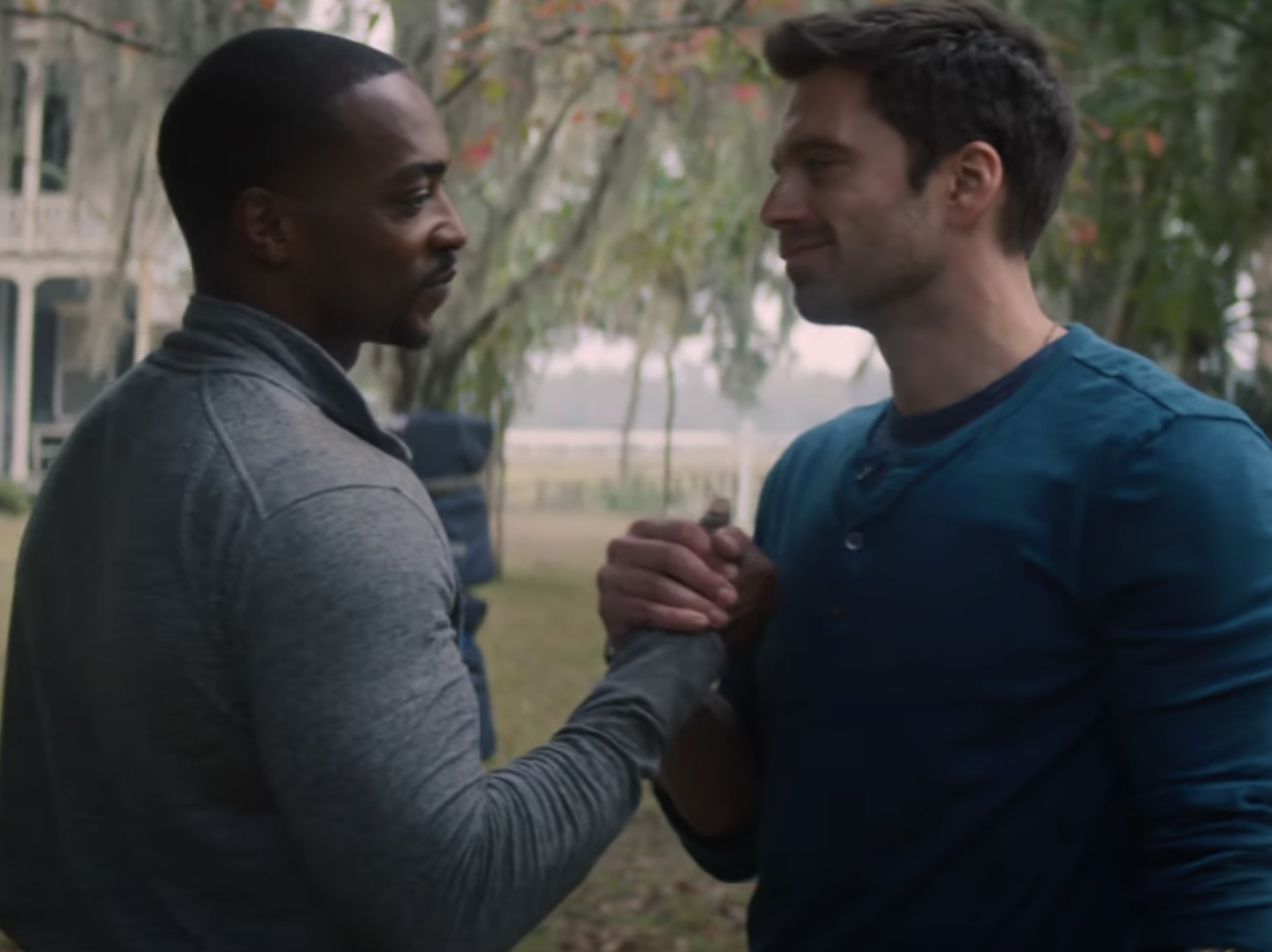 When it will be on Disney Plus: March 19

Anthony Mackie and Sebastian Stan will return to play Sam Wilson/Falcon (Anthony Mackie) and Bucky Barnes/The Winter Soldier (Sebastian Stan), respectively, on this live-action series. According to Feige, the two characters will be forced to team up.

“While audiences have seen them as part of the Avengers, with Disney Plus, we now get the chance to take a deeper dive and learn much more about each of these heroes,” said Feige at San Diego Comic-Con (SDCC) in 2019.

At the time, Feige announced Daniel Brühl will return as the villain, Baron Zemo. He appeared in “Captain America: Civil War” and could be seen briefly in the series’ Super Bowl teaser.

During Disney’s 2020 investor’s day, Feige described the series as “a cinematic experience” played out over six episodes.

You can watch the first look at the show here.

“Loki” will revolve around everyone’s favourite God of Mischief.

Marvel Studios/Disney+After losing Loki at the start of ‘Avengers: Infinity War,’ Loki will be back on his own show.

Fans were gutted when Thanos killed Loki at the very start of “Avengers: Infinity War,” so it’s exciting to see Tom Hiddleston reprising his role as the God of Mischief on this series.

Feige described the show as a “crime thriller.” What does that mean?

In “Avengers: Endgame,” we saw Loki take off with the space stone when Captain America, Tony Stark, and Ant-Man went back in time.

The Loki we see probably hasn’t gone through the character growth we were able to see throughout the MCU’s “Thor” movies. Instead, the mischievous Loki we encountered in “The Avengers” is probably going to be back.

A previous Super Bowl teaser showed Loki wearing a jumpsuit hinting at the introduction of the TVA or the Time Variance Authority. The group monitors and oversees the multiverse and multiple timelines.

Watch the first look at the show here.

Feige described the animated series, “Marvel’s What If…?” as a dream project.

Marvel Studios/Disney+‘What If…’ will be Marvel Studios’ first animated project. One episode will be dedicated to Peggy Carter.

The animated series is inspired by the comic books of the same name. Instead of the comics, according to Feige, each episode will take a look at an important moment from the Marvel Cinematic Universe and play out an alternate “what if” scenario.

“Our first episode will ask the questions, ‘What if Peggy Carter was the one who became a super soldier?’ and ‘What if Steve Rogers had stayed a scrawny young kid, but joined the fight with an armoured suit built by Howard Stark?” Feige said.

New and returning cast members will lend their voices to their animated counterparts. At Comic-Con, Michael B. Jordan, Josh Brolin, Mark Ruffalo, Chadwick Boseman, Paul Rudd, Jeff Goldblum, Michael Rooker, and Tom Hiddleston were among the 25 actors shown on screen to reprise their roles on the animated series.

Jeffrey Wright (“Westworld”) will voice The Watcher, a celestial being who observes and watches over the multiverse. The show is directed by Bryan Andrews.

Watch the teaser for the animated Marvel series here.

A series based on popular comic character Ms. Marvel is in the works.

“Ms. Marvel is a Pakistani-American teen superhero,” Feige said of the 16-year-old from New Jersey. “Earlier this year, during shutdown, we held online auditions all around the world to find our Kamala Khan and we found her in Iman Vallani.”

“A great student, an avid gamer and a voracious fan-fiction scribe, she has a special affinity for Super Heroes, particularly Captain Marvel. But Kamala struggles to fit in at home and at school-that is, until she gets super powers like the heroes she’s always looked up to. Life is easier with super powers, right?”

You can watch a sizzle reel for the show here.

Jeremy Renner is getting his own show called “Hawkeye,” which will also star Hailee Steinfeld. 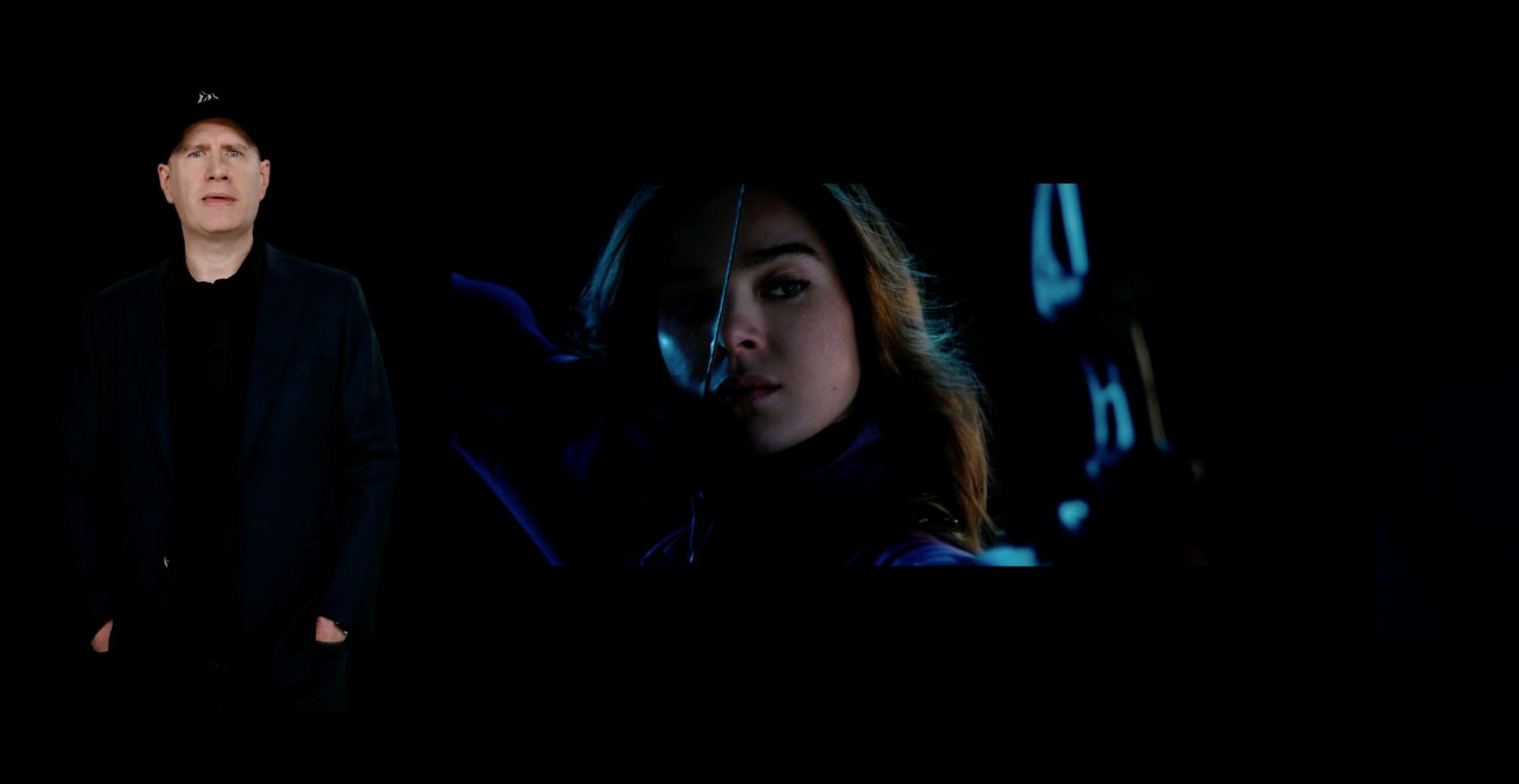 DisneyHailee Steinfeld will play Kate Bishop in the ‘Hawkeye’ series.

The series will show more of Clint Barton/Hawkeye’s time as Ronin after the events of “Infinity War.” The series will also include Kate Bishop, a character from the comics who takes on the mantle of Hawkeye.

Rhys Thomas will oversee the show which is being directed by Bert and Bertie.

Hailee Steinfeld will play Kate Bishop in the “Hawkeye” series.

“She-Hulk” will be a comedy series. 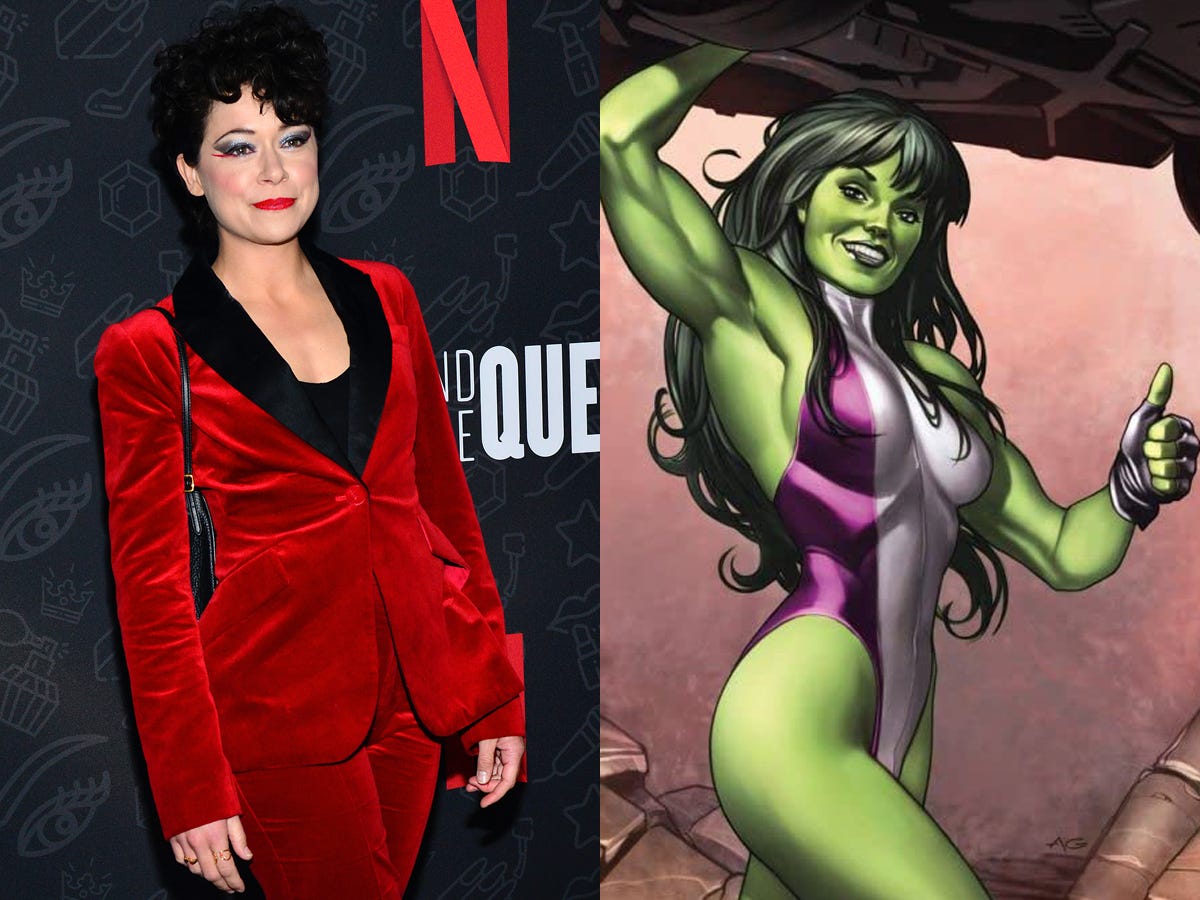 Mark Ruffalo won’t be the only Hulk in the Marvel Cinematic Universe. Feige said Jennifer Walters, who is known as She-Hulk, will be getting her own series.

Feige confirmed Tatiana Maslany will play the lawyer. Ruffalo and Tim Roth’s the Abomination – from the 2008 “Hulk” film – will also appear on the Disney Plus series.

“It’s a series about a woman trying to navigate the world and be taken seriously as a working professional despite the fact that she’s well over six-foot-seven and green,” Feige said. “It’s a very funny series.”

“Since Jennifer Walters is a lawyer who specialises specifically in superhero-oriented legal cases, you never know what Marvel characters are going to pop up from episode to episode,” Feige teased.

Kat Coiro and Anu Valia are directing the series.

“Moon Knight” is described as an action-adventure, “Indiana Jones”-type story. 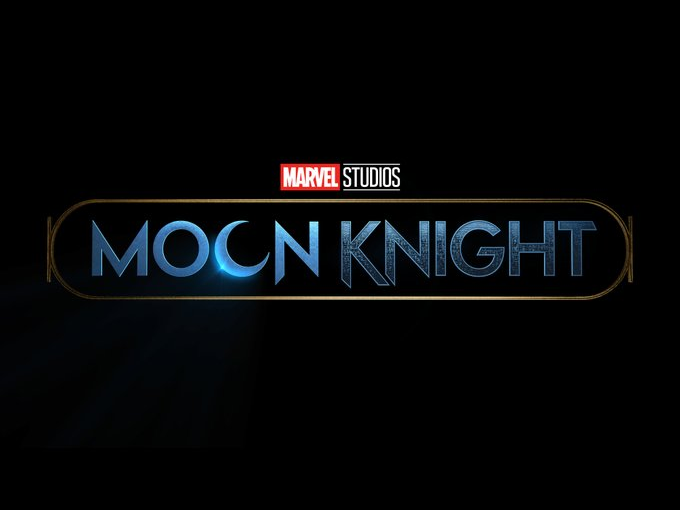 Marvel StudiosHere’s the logo for ‘Moon Knight’ which debuted at D23 Expo.

Directed by Mohamed Diab, the series will follow a vigilante who suffers from dissociative identity disorder.

According to the official description from Marvel Studios, “the multiple identities who live inside him are distinct characters who appear against a backdrop of Egyptian iconography.”

In the comics, Marc Spector is a mercenary who gets resurrected by an Egyptian moon god after being left for dead. Oscar Isaac will reportedly star in the series.

DisneySamuel L. Jackson and Ben Mendelsohn will team up again.

Expect to see even more Skrulls from “Captain Marvel.” The comic of the same name follows shapeshifting Skrulls who have infiltrated Earth for years. This could be a chance to see some dead characters come back to life if Skrulls are pretending to be them.

“Next to ‘Civil War,’ ‘Secret Invasion’ is arguably the biggest crossover comic event of the last 20 years,” Feige said.

Get ready for the next generation of Iron Man with “Ironheart.”

Dominique Thorne will play inventor Riri Williams, who builds the most advanced suit of armour anyone’s seen since Iron Man.

Based on the Marvel comic, the series will make James Rhodes (aka War Machine) deal with the fallout of his old friend’s tech falling into the wrong hands.

Don Cheadle will reprise his MCU role as War Machine on the Disney Plus show.

Move aside “Star Wars.” Marvel is giving us a live-action “Guardians of the Galaxy Holiday Special.”

DisneyKevin Feige surprised everyone with an unexpected upcoming holiday treat from James Gunn.

“Guardians of the Galaxy” director and writer James Gunn is working on the project himself.

Gunn shared on Twitter that he has been bugging Feige “endlessly” about this special over the years. It’s kind of fitting since “GotG” is more or less a parody of “Star Wars,” which infamously had its own little holiday special.

Baby Groot is getting a series of shorts that are aptly called “I Am Groot.” 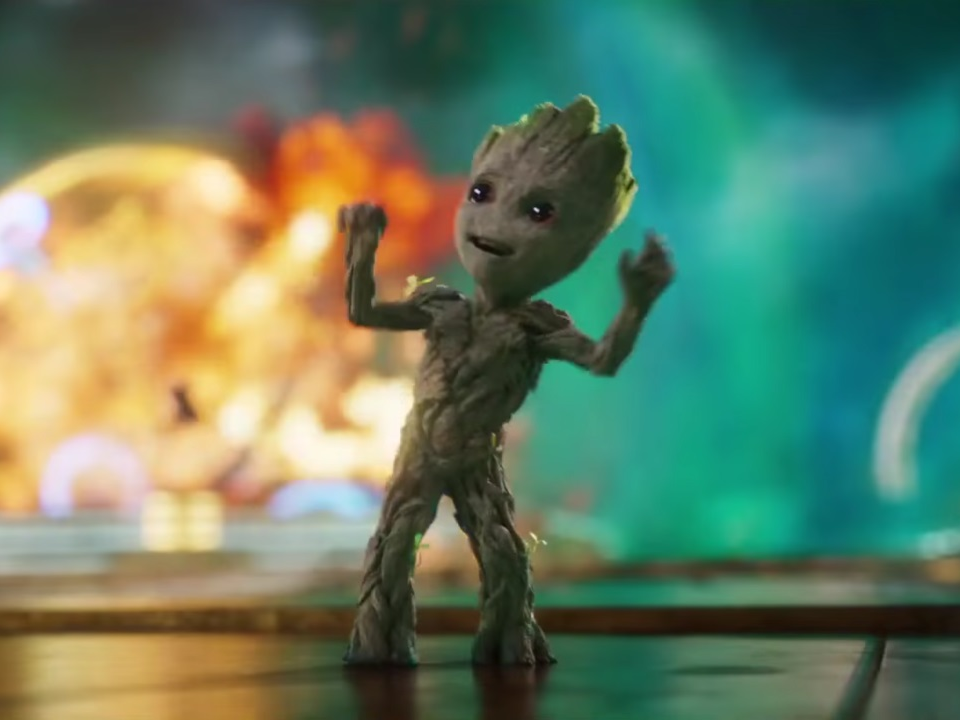