Disney is selling 6 high-end, limited-edition villain dolls this fall. Here they all are. 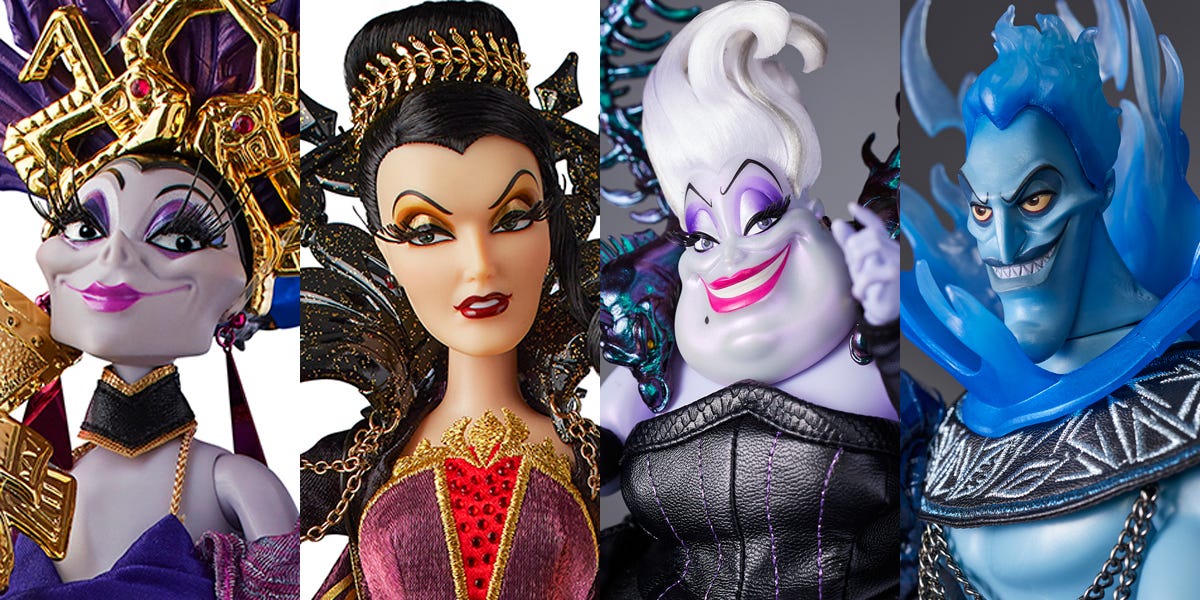 Forget Disney princesses. This fall the Disney Store is highlighting some of its biggest villains.

Disney Store designers Jess Fuchs and Steven Thompson, who have previously worked on other character designs for the Midnight Masquerade series, have been working on this new collection for over a year.

“The characters are so exciting to work on because they are over the top to begin with,” Thompson, the principal designer on the collection, told Insider over email. “They have a dark side to them, but also a sense of fun.”

“We worked with the concept that this time out the villains are ‘crashing the ball.’ The artwork is a bit moodier and vibrant. A little edgier,” Thompson continued. “I imagined it was like we were catching them at the moment of arrival, just before they enter to the surprise of everyone there. As I was working on each new piece, I would try to imagine what kind of mischief each character was going to get into in order to come up with the different poses and expressions.”

Starting October 6, a new doll will be released each Tuesday at 10 a.m. ET through November 10 online. For a chance to buy one, you’ll need to access shopDisney’s MerchPass here to be placed into an online lottery. If selected, you’ll have a specific window of time to purchase the doll. Disney launched the Merchpass system a few months back to help keep its site running smoothly when highly-anticipated items launch.

Keep reading to learn more about each doll from the Disney Store artists who designed them.

Maleficent will be the first doll available in October. 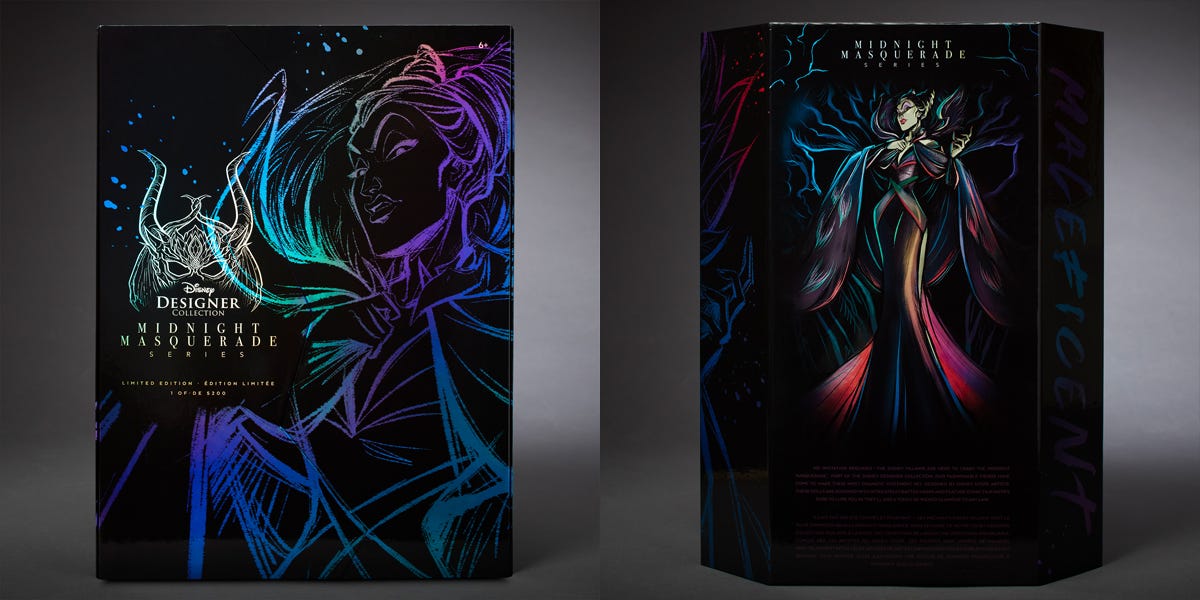 Courtesy shopDisneyMaleficent made her debut in 1959’s ‘Sleeping Beauty.’

There will be 5,200 Maleficent dolls available.

The green fiery flames that envelope Maleficent in the film are woven into her cape. 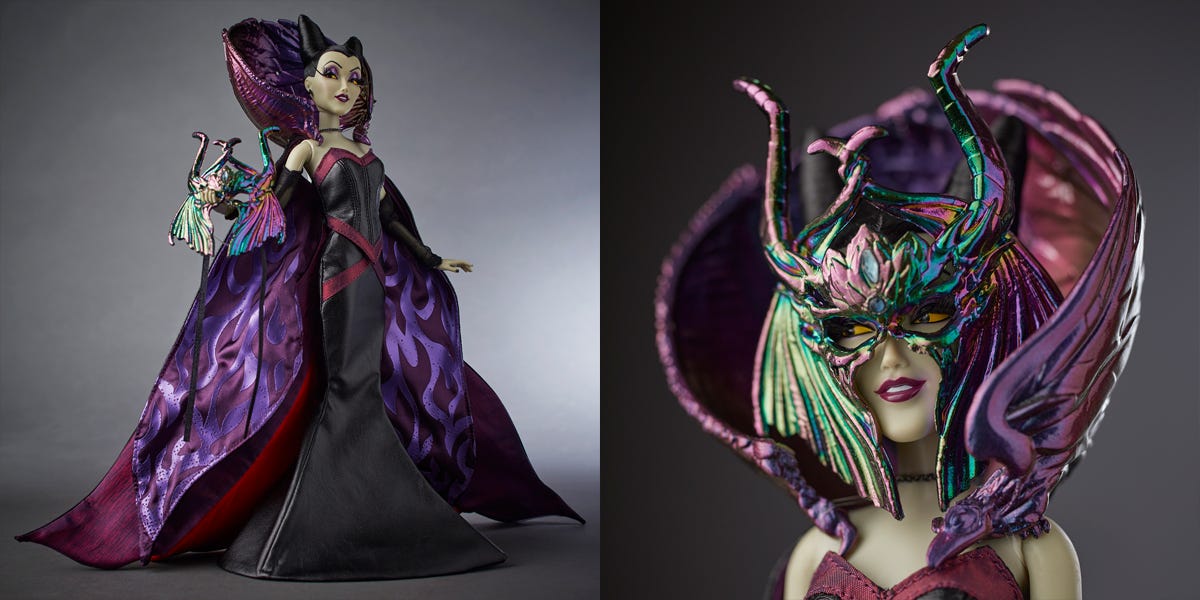 Courtesy shopDisneyThe purple cape gives a nod to the powerful dragon she can become.

“The masks all nod to important moments in each character’s story,” senior designer for toys Jess Fuchs told Insider.

Maleficent’s mask design cleverly resembles the dragon she transforms into by the end of “Sleeping Beauty.”

You’ll be able to find Maleficent on October 6 here.

Cinderella’s stepmother Lady Tremaine is getting a doll of her own. 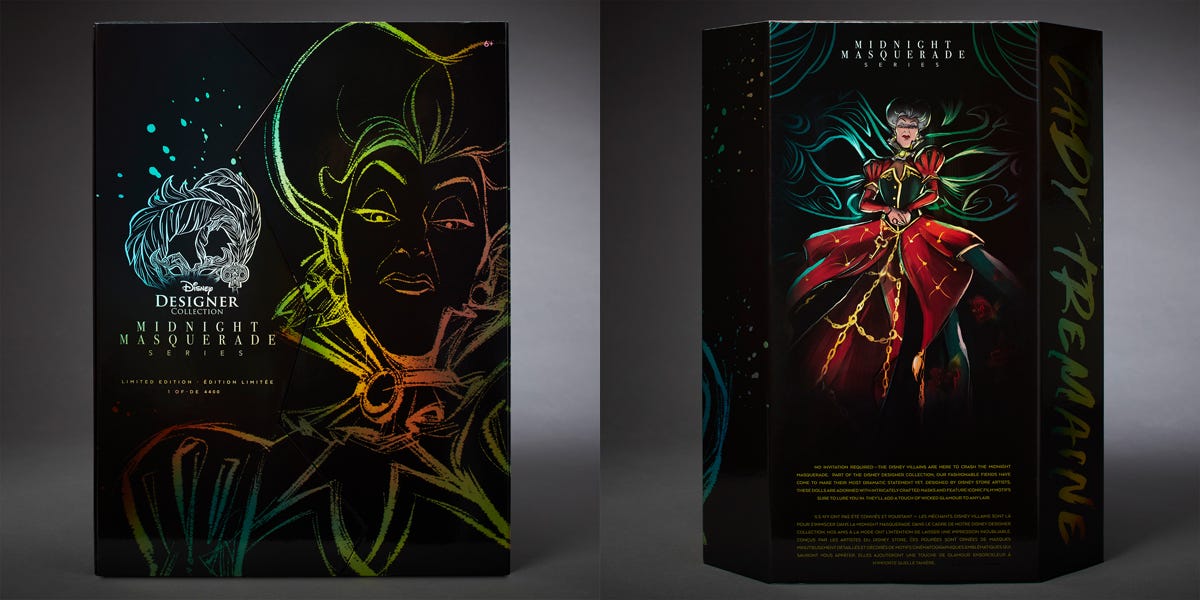 There will be 4,400 Lady Tremaine dolls available.

Lady Tremaine is dressed to go to a royal ball complete with some clever nods to her storyline. 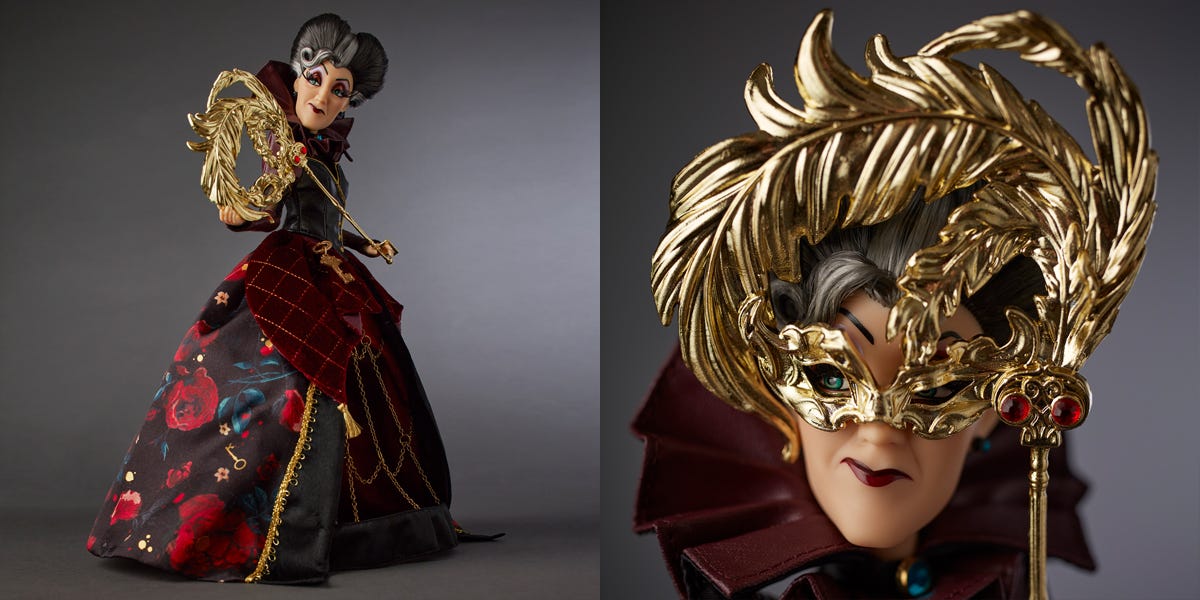 Courtesy shopDisneyThe key Lady Tremaine used to lock Cinderella in the attic is worked into the design of her dress while a physical key is around her waist.

“Lady Tremaine has most of my favourite details,” Fuchs said. “She was the hardest to design for since her personality is the most realistically evil, but I really love how her outfit came out. It’s all about confinement, so I used a skeleton key motif in the handle of her mask and on her skirt print, and the chain front skirt worked out amazing.”

You’ll be able to find Lady Tremaine on October 13 here.

Ursula will be available in mid-October. 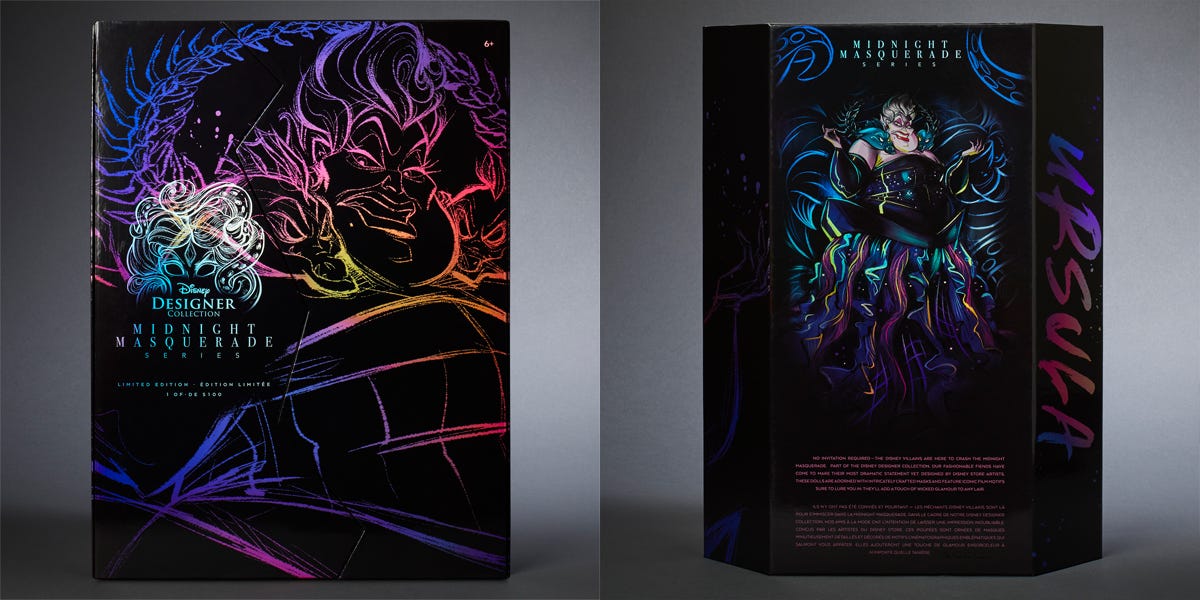 There will be 5,100 Ursula dolls available.

Look closely and Ursula has King Triton’s crown around one of her tentacles. 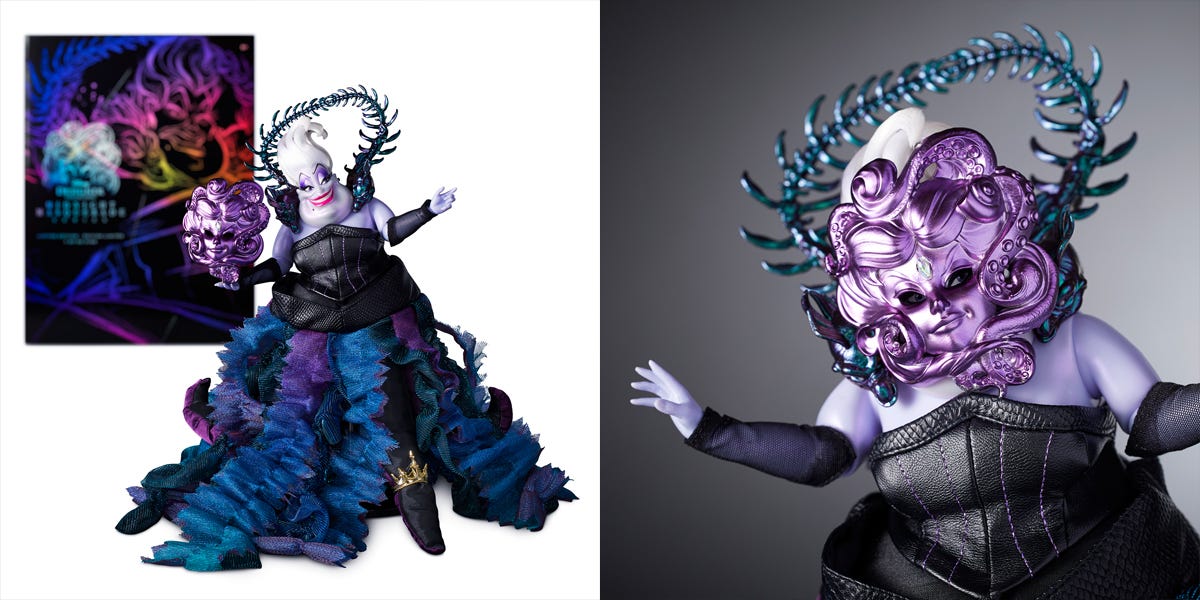 Courtesy shopDisneyUrsula’s silhouette gave Fuchs a bit more freedom to design while keeping the core of the character recognisable.

Fuch’s pointed out that you may have missed Ursula’s mask is her alter ego Vanessa’s face. Her eel sidekicks Flotsam and Jetsam are worn around her neck.

You’ll be able to find Ursula on October 20 here.

Yzma is getting her own doll to round out the month. 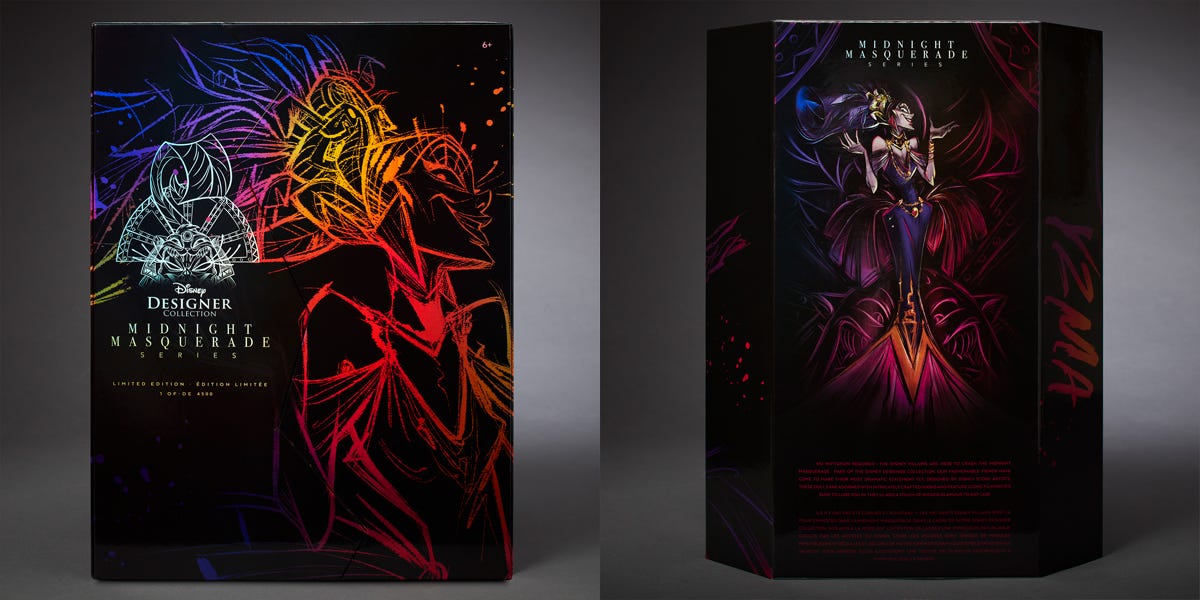 Courtesy shopDisneyYzma was introduced in 2000’s ‘The Emperor’s New Groove.’

“The Emperor’s New Groove” villain was one of Fuchs’ favourite characters to design.

“I’m always advocating to add new characters to our line, and [Yzma and Hades are] two of my all-time favs, so there was lots of excitement around the office as soon as they were in,” Fuchs said.

There will be 4,500 Yzma dolls available. 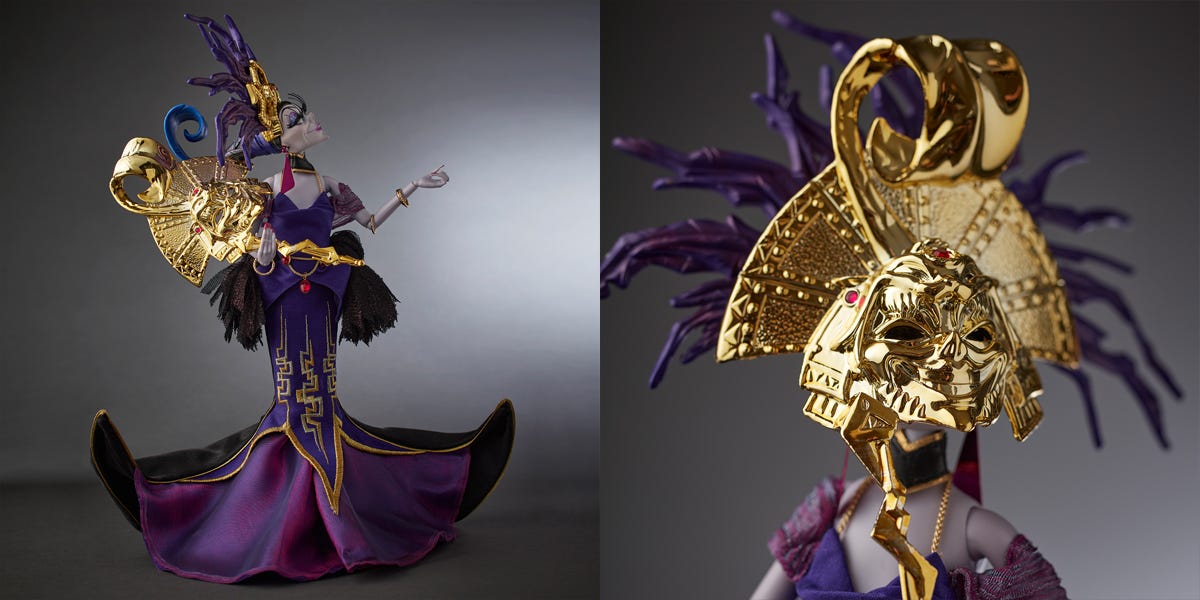 Courtesy shopDisneyFuchs said Yzma would never wear anyone’s face but her own.

“The first thing Yzma does after llama-fying Kuzco is paint her face all over the kingdom – so I knew she had to have her actual face moulded into the mask,” Fuchs said. “She’d never cover that beautiful visage. The kitten face is her form at the end of the movie, along with the royal crown, and even her dagger is incorporated into the handle.”

You’ll be able to find Yzma on October 27 here.

The Evil Queen will be available the first week of November. 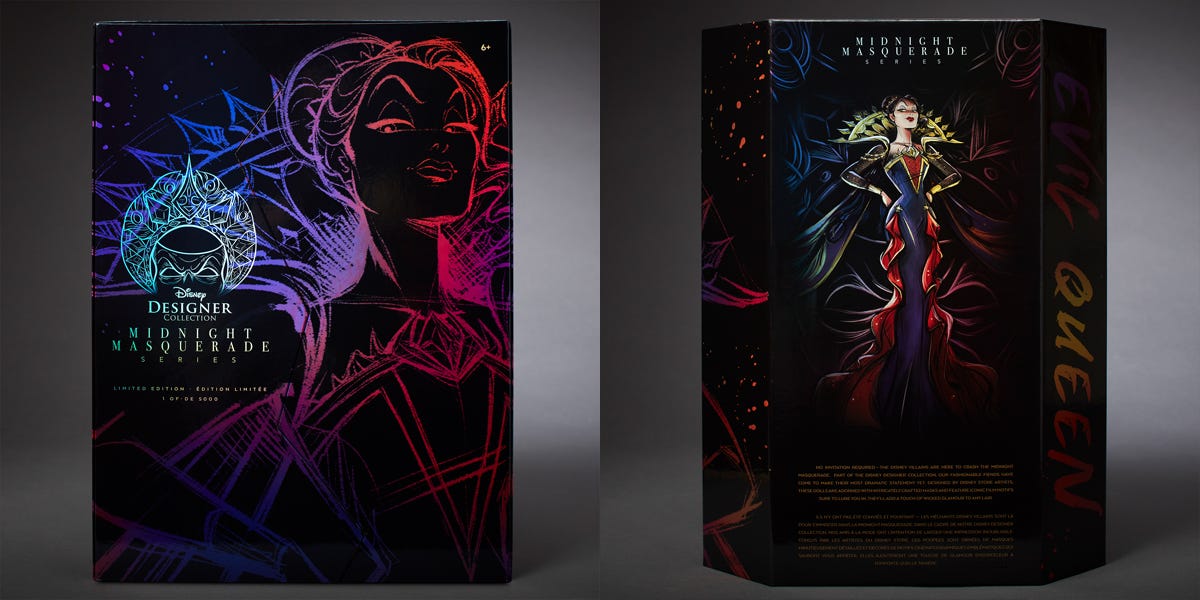 There will be 5,000 Evil Queen dolls available.

Naturally, the Evil Queen’s mask is of her beloved Magic Mirror. 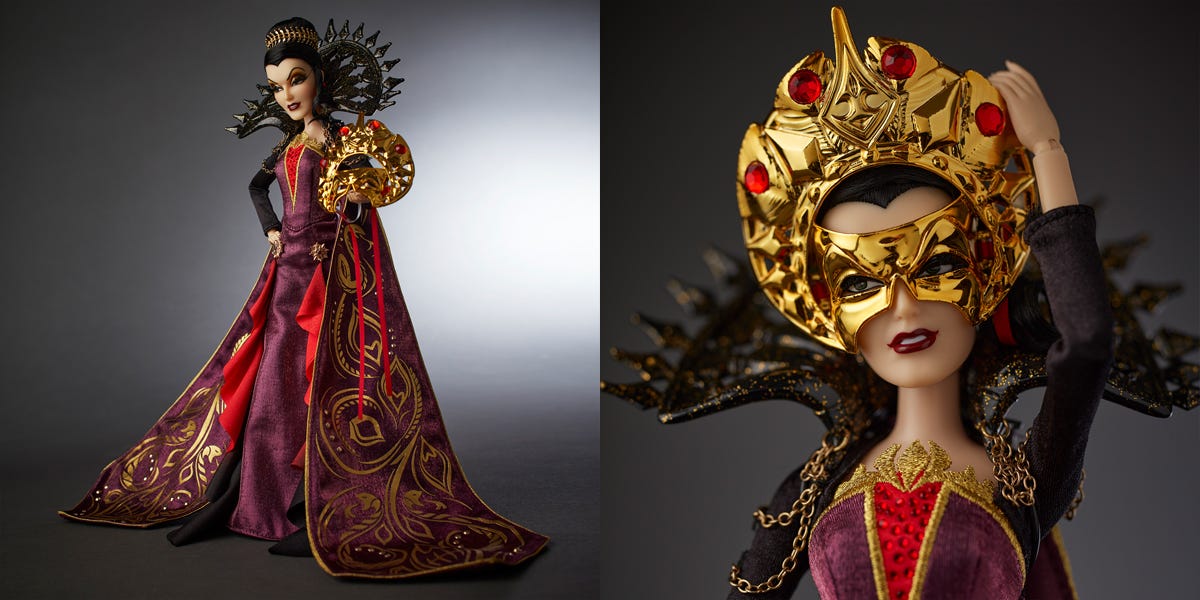 Fuchs said a tiny detail that fans may miss is the feathers on the Evil Queen’s mask are from her throne.

You’ll be able to find the Evil Queen on November 3 here.

Hades closes out the collection.

Hades was one of the two dolls Fuchs and Thompson were most excited to bring to life. During his time at Disney Animation, Thompson worked on “Hercules” and “Emperor’s New Groove.”

There will be 4,300 Hades dolls available.

Hades’ two sidekicks Pain and Panic were worked into the design of his masks. 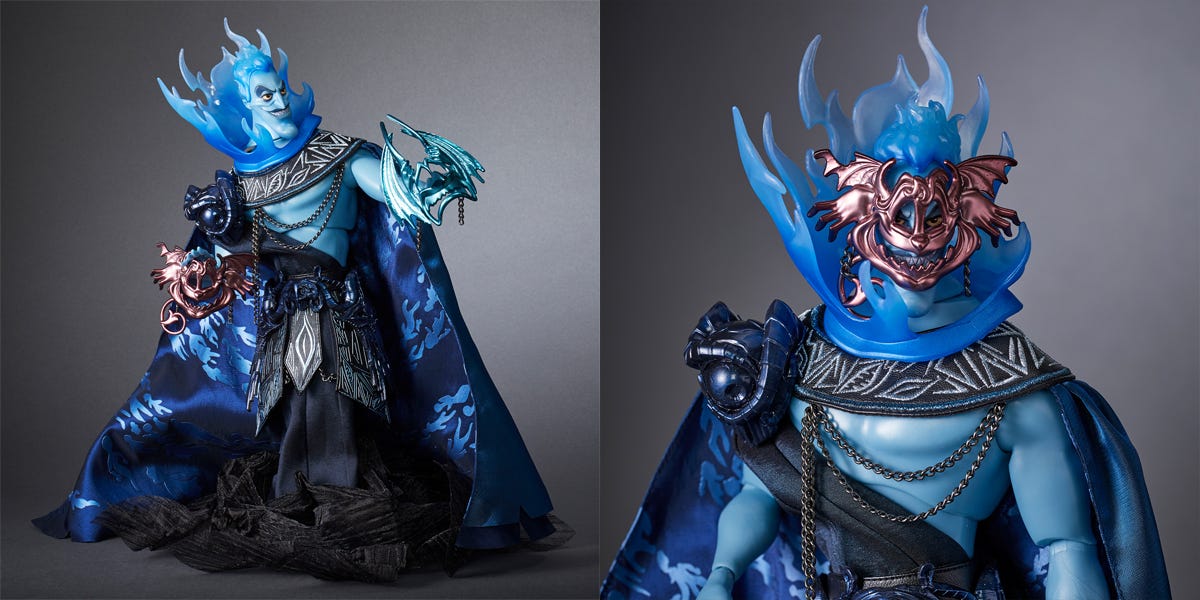 Hades is the only villain to get two masks. His sidekicks, Pain and Panic, appear as comedy and tragedy masquerade masks.

You’ll be able to find Hades on November 10 here.