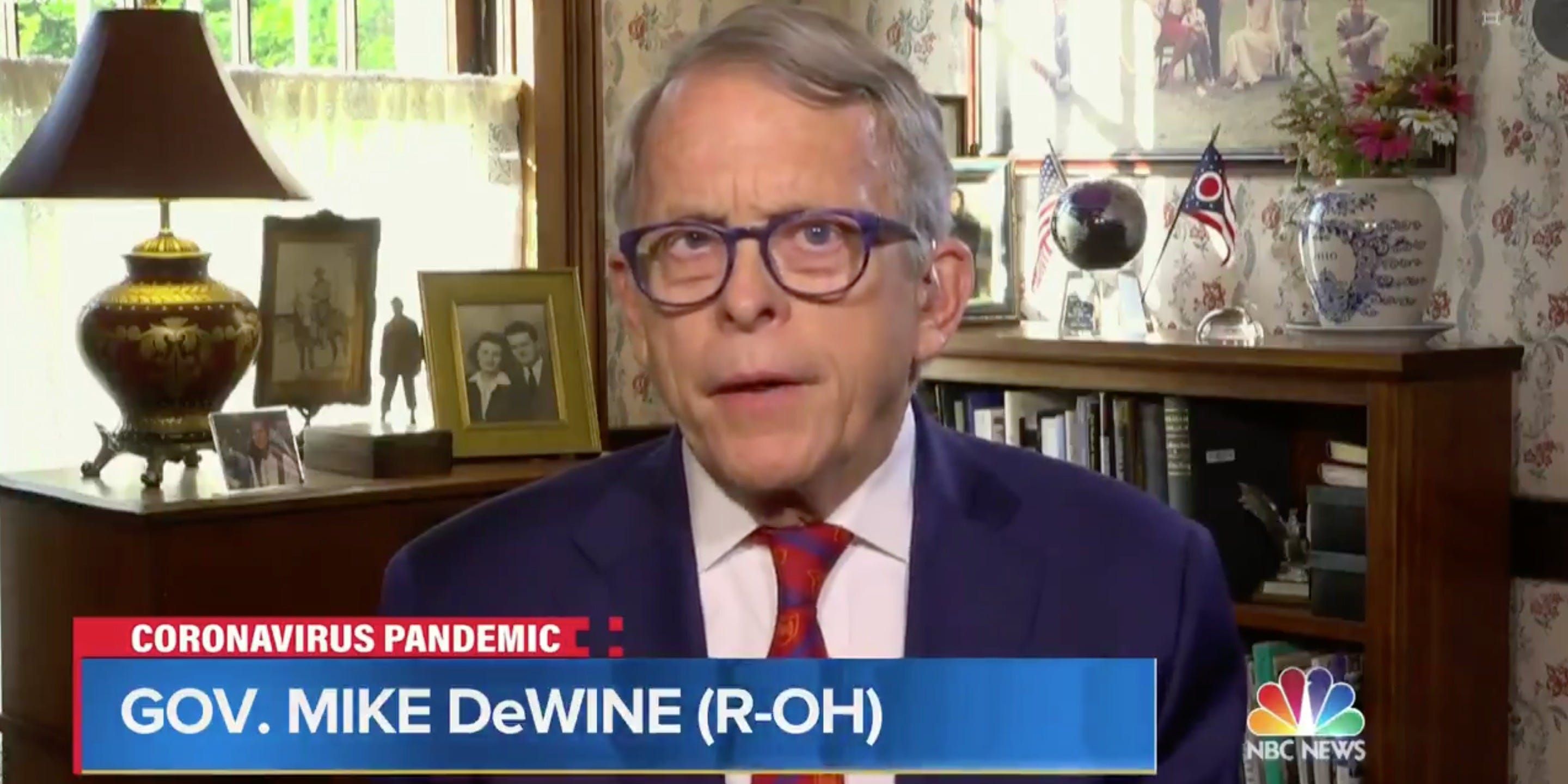 Meet The PressOhio Gov. Mike DeWine said he hasn’t ruled out a statewide mask mandate as he said his state was ‘headed in the wrong direction.’

Ohio Gov. Mike DeWine, who has so far refused calls to issue a statewide mask mandate, warned Sunday that his state could become the next Florida – a current epicentre for coronavirus cases in the US.

“We are at the point where we could become Florida,” DeWine said. “Where you look at our numbers today versus where Florida was a month ago, we have very similar numbers. So we’re very, very concerned.”

According to data analysed by Johns Hopkins University, there have been at least 350,037 known cases of COVID-19 in Florida and 4,981 deaths. In Ohio, there have been 74,928 confirmed cases of the virus and 3,173 deaths. According to the Hopkins data, 6.2% of all COVID-19 tests administered over the past week in Ohio have returned a positive result compared to about 17% of the tests in Florida.

“While we did a great job early on in Ohio, we’re now headed in the wrong direction, and frankly, I’m very, very concerned about that,” he said. “So we’re going to move ahead with more orders from us this week.”

The Republican governor had been praised early during the pandemic for his swift actions to prevent the spread of COVID-19, though he has since been criticised, particularly for his reluctance to require Ohioans to wear facial coverings in public. Public health experts say these masks greatly mitigate community spread of the novel coronavirus.

WATCH: Ohio Gov. Mike DeWine (R) tells @ChuckTodd that his state is “going the wrong way” on COVID infections and “would not rule out going state-wide” with a mask mandate. @GovMikeDeWine: “You wear the mask for other people. You wear the mask to protect your grandmother.” pic.twitter.com/LmRV7mub6b

In June, the state’s health director, Dr. Amy Acton, who helped DeWine craft his coronavirus response, resigned after protesters in the state targeted her for weeks, as The Cincinnati Enquirer reported.

According to the Toledo Blade, DeWine on April 27 had mandated that residents wear face masks when patronising businesses that were soon to be reopened as he relaxed Ohio’s stay-at-home mandate. The next day, DeWine reversed the order after he received backlash.

“We believe that, in almost every case, it is safer for everyone if both people wear a mask, but we also know that this was offensive,” he said April 28. “People looked at this and said that’s one government mandate too far. It’s just too much.”

“I don’t think anybody in Ohio who’s watched what I’ve done over the last four months doubts that, I’ll do what we need to do to protect Ohioans,” he said, adding that officials had not ruled out a statewide order.

As of Sunday, face masks are currently required in 19 of Ohio’s 88 counties under the state’s Level 3 designation, which as of July 7, requires the use of face masks to through DeWine’s executive order. Masks are not required for counties at Level 2 or below.

Still, DeWine stressed that education rather than order could be more effective in stopping Ohio from becoming an epicentre.

“Orders are important, but it’s also about getting people to understand, ‘Hey, this is, this is very, very serious,'” DeWine said.