Critics say Portland protests have been co-opted by 'white spectacle,' but Black activists say they're staying focused on Black lives 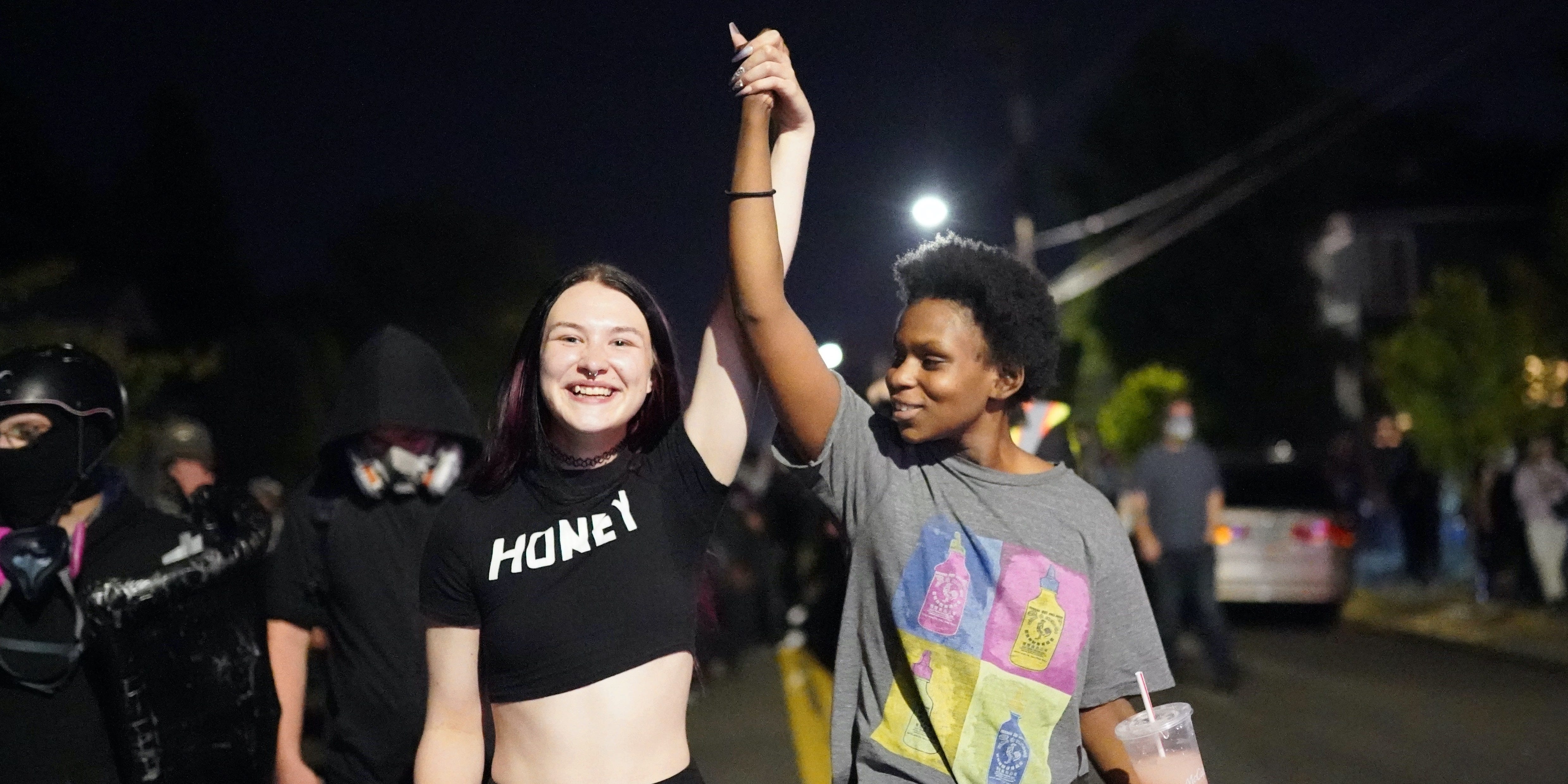 Nathan Howard/Getty ImagesHailea Berglund, left, and Tanzania White hold hands while marching toward the Portland Police Bureau North Precinct on the 75th day of protests against racial injustice and police brutality on August 10, 2020 in Portland, Oregon.

For more than two months, protests and demonstrations have persisted in Portland, Oregon. They’re an evolving outgrowth of nationwide Black Lives Matter protests, which began at the end of May after the caught-on-video police killing of 46-year-old George Floyd in Minneapolis.

The Portland scene has faced criticism from some activists within the anti-racism and anti-police brutality movement, some of whom say the demonstrations and media coverage of them have shifted from the aims of Black Lives Matter. Instead, critics suggest, white activists have co-opted protests and diluted their true meaning.

The critique gained steam when E.D. Mondainé, the president of the Portland chapter of the NAACP, authored an op-ed for the Washington Post in late July, arguing that Portland had become “white spectacle” and needed to be re-centered around Black lives.

“As the demonstrations continue every night in Portland, many people with their own agendas are co-opting, and distracting attention from, what should be our central concern: the Black Lives Matter movement,” he wrote.

Chuck Lovell, the city’s Black police chief, agreed and said earlier in August that the actions of some destructive protestors were “not forwarding the goals that are going to lead to better outcomes for people of colour.”

Mondainé targeted well-intentioned activists, like the Wall of Mums, who he argued redirected “attention away from the urgent issue of murdered black bodies” in the name of causing a “spectacle.”

“This might ease the consciences of white, affluent women who have previously been silent in the face of black oppression, but it’s fair to ask: Are they really furthering the cause of justice, or is this another example of white co-optation?” he wrote.

But local activists told Insider they questioned the premise of the critique. They said the local movement was complex and argued that the Portland demonstrations had not lost their centre around Black lives.

“Many things are true at once,” Candace Avalos, a resident of Portland and co-founder of the newly formed Black Millennial Movement, told Insider. “I think there is actually some validity to what he’s saying, and at the same time, I think there’s a lot to show that’s not necessarily true – or that it’s more complicated than that.”

The Portland movement is not ‘black and white,’ activists say

The Black Lives Matter movement – the decentralized anti-racism campaign founded in 2013 after the death of Trayvon Martin – has involved largely peaceful protests, although destructive protesters in some cities have sometimes sparked criticism, including repeated attacks from President Donald Trump.

The Portland protests, in particular, have received greater national attention because of the Trump administration’s deployment of federal agents to the city. While US officials said federal officers were there to protect federal property, local and state leaders clashed with the administration over their deployment.

Part of the perception that the protests have become centered around white activists, Avalos said, stems from the fact that more people from Portland are coming out in defence of Black lives – many just happen to be white. Just 5.8% of residents in Portland, a city with 654,741 residents, are Black, according to data from the US Census Bureau. Approximately 77% of the people living in the city are white. 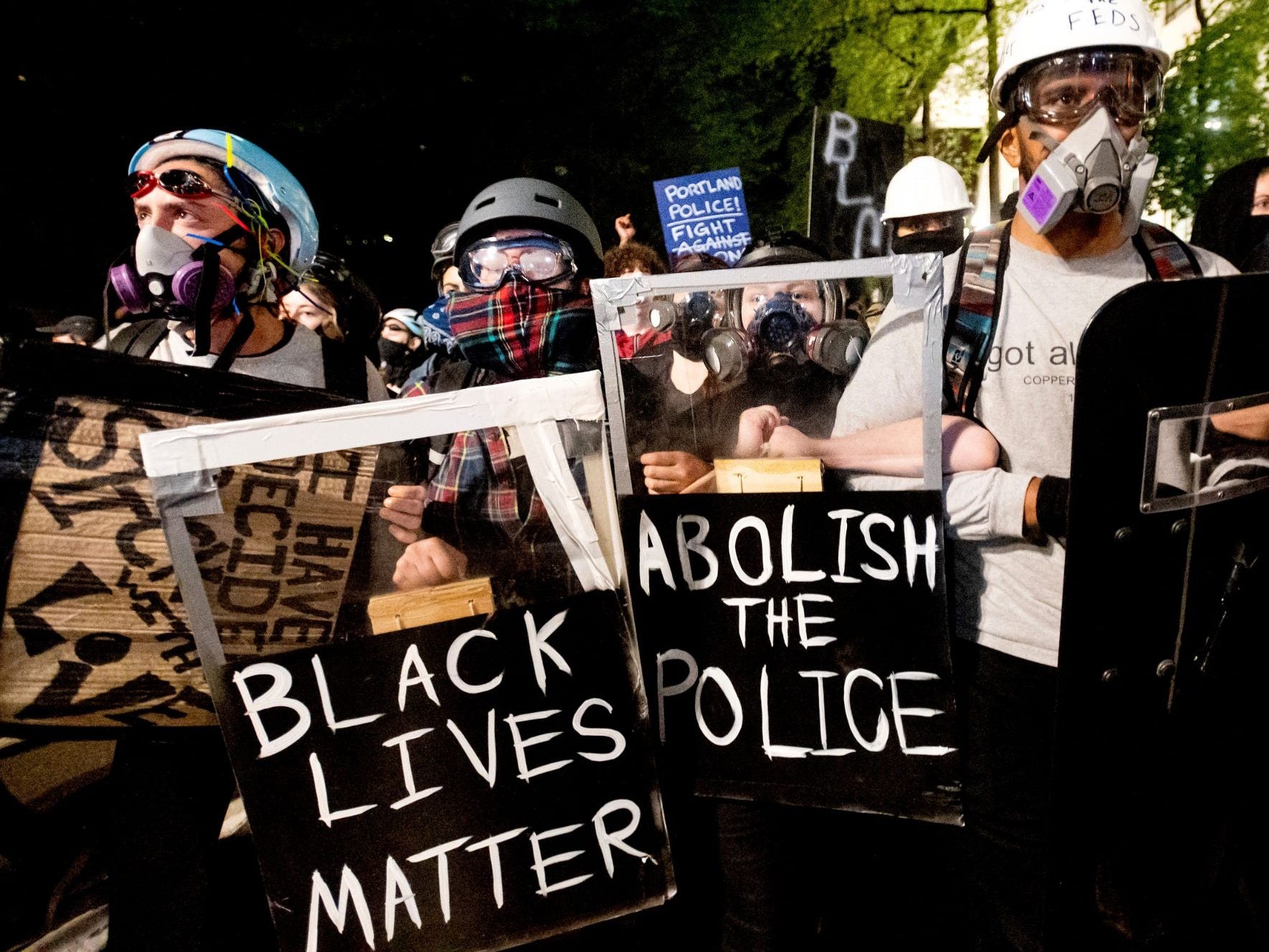 Avalos pointed toward Floyd’s killing as a tone shift for many Americans, including white people, who have found greater solidarity with Black Americans in expressing their frustration with systems they see as broken.

“I think that in addition to people just being more aware and more conscious of their privileges and the role they play in society, I think that people are just trying to be better,” she said.”

“These things are messy, and they’re complicated, and we’re all bringing different perspectives, cultures, and life experiences to the mix,” she added. “It makes it hard to say there’s just one way to protest or there’s one way to resist.”

There are going to be disagreements within members of a movement, Avalos said. While infighting shouldn’t be accepted, it’s to be expected, she said.

“Movements evolve,” Avalos said. “Grassroots movements like this evolve naturally and I think it makes sense how it has evolved.”

Shanice Brittany Clark, also a co-founder of the Black Millennial Movement and the director of community engagement at Portland Public Schools, said that part of the changes within the movement is due, in part, to its atypical nature.

“I think continuing this pressure is so important, and it’s just messier than a black or white situation,” Clarke said. “It’s not that simple and I think that’s where I’m at with the ‘spectacle,’ or the narrative about what’s happening. Nathan Howard/Getty ImagesProtesters chant and wave flags in front of the Multnomah County Sheriff’s Office on August 11, 2020 in Portland, Oregon.

“In a protest, you know the organiser,” Clarke continued. “You know when it starts. You know when it stops. You know the arguments. But at this moment, this is more of an autonomous resistance for Black people, and we are in these streets, pushing back and resisting. I think there’s a level of messiness that comes with what it means to be autonomous, but we’re still in unison with the idea about why we are here.”

Activists may have different perspectives about what it looks like to watch white Americans become more involved in typically Black spaces and movements, Clarke told Insider. When she first heard the news of Floyd’s death, she said her feelings of pain were familiar. For non-Black Americans, she said the video of Floyd’s killing sparked a new feeling of terror.

“We are sitting here talking about death, and dying, and murder. This is not normal. People are going to be angry,” she told Insider.

There’s room to refine the activism of white allies

Kwame Holmes, a human rights scholar-in-residence at Bard College and the faculty adviser of the Bard Prison Initiative, told Insider that civil rights movements and figures have previously been co-opted by white people for their own ends – even in cases when they support the causes.

“It’s the idea that America has not really figured out how to stop using Black people as an object,” he said, pointing toward the objectification and politicization of famed civil rights activist Martin Luther King, Jr., as an example. “His words become just an object that, like the slaves, can be used for any purpose a white person sees fit.

“I think unfortunately this can include the actions of white people who are sympathetic to civil rights causes but are so steeped in the culture that takes Blackness and turns it into a usable object that they can inadvertently reproduce some of the same dynamics,” he added. 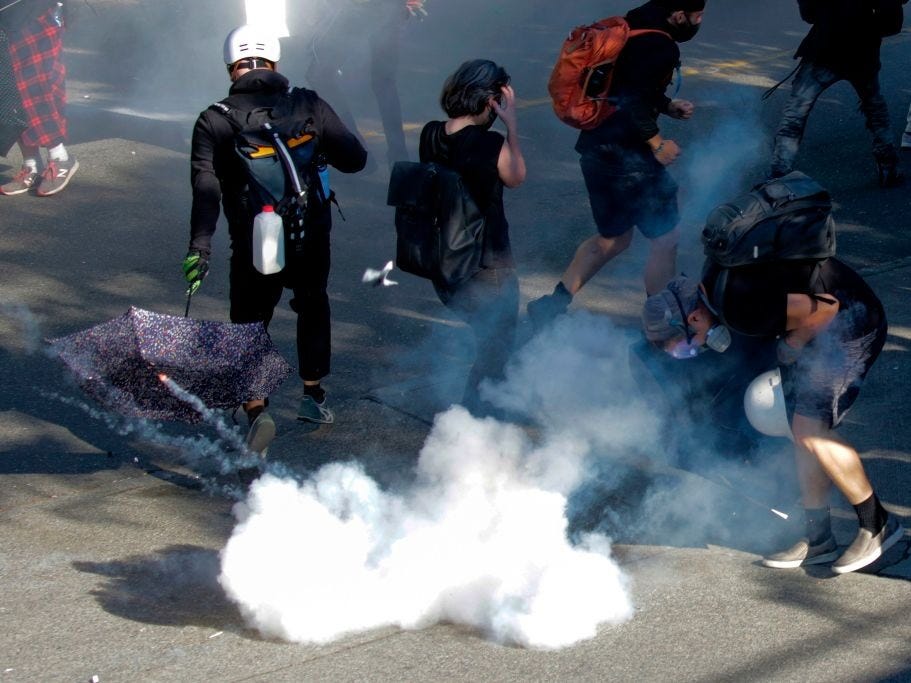 JASON REDMOND/AFP via Getty ImagesA blast ball detonates as police clash with protesters following the ‘Youth Day of Action and Solidarity with Portland’ demonstration in Seattle, Washington on July 25, 2020.

Holmes, who hasn’t been to the protests in Portland but has been observing them through media coverage, said in predominately white cities – like Portland and Seattle, which has also seen large protests – anti-police sentiment has afforded white activists the opportunity to join the movement without confronting problematic behaviours of their own.

“The police have become a way of distancing themselves from the production of an anti-Black society,” he said. “It seems like they’re able to say ‘Black Lives Matter’ with such enormous comfort and fervor because of the way in which their other behaviours have ensured they won’t have Black neighbours.”

“There’s room to refine it, of course,” she said. “I think that experience of white people waking up right now means something different for everyone. For me, I’ve been living my whole life in this Black skin, and right now, I see system change and policy change just being a taste away, and I believe the culture change is something we can work on.” 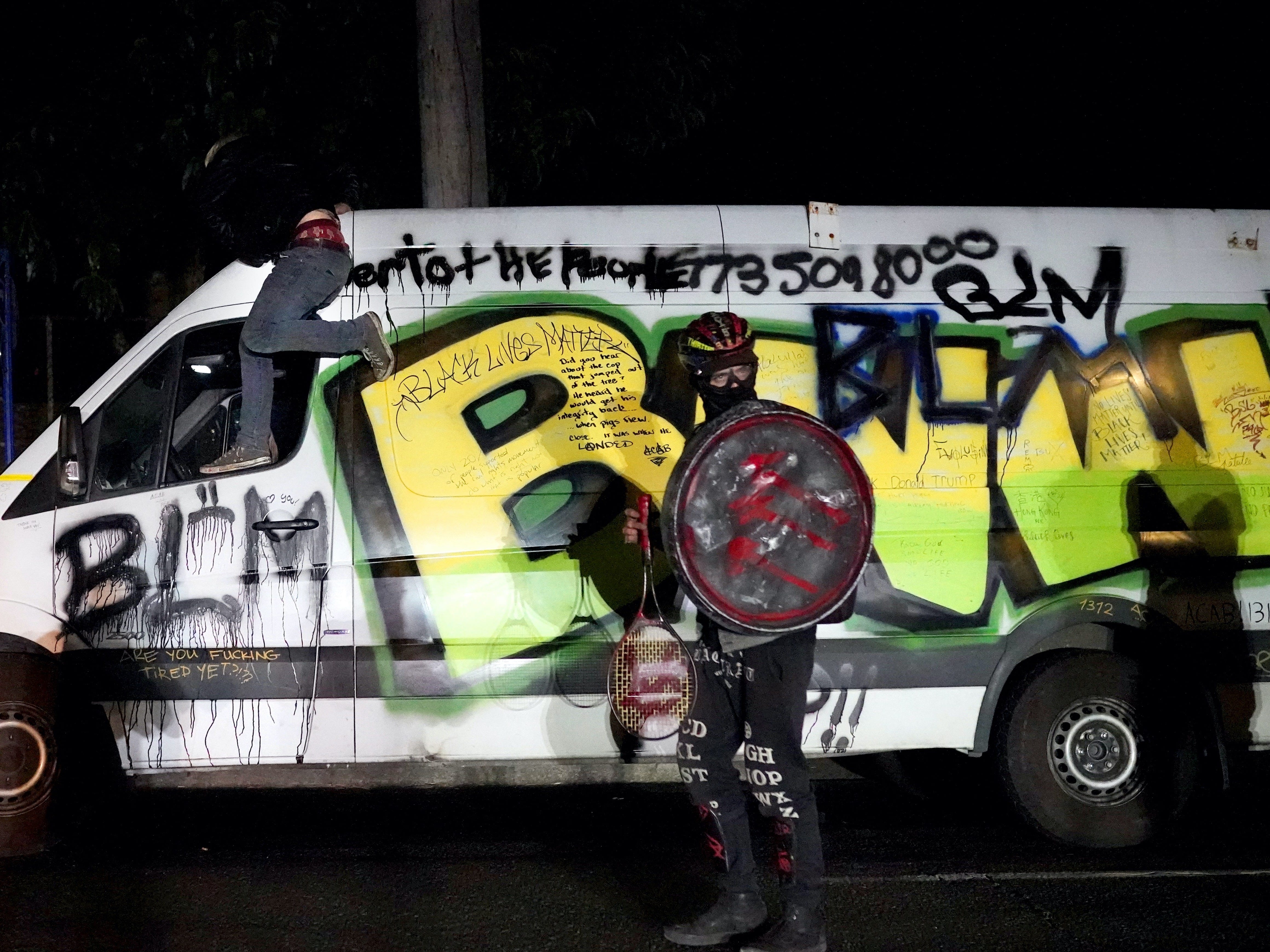 Nathan Howard/Getty ImagesA protester climbs from the roof of a van while a second watches the entrance to the Multnomah County Sheriff’s Office on August 12, 2020 in Portland, Oregon

Both Avalos and Clarke said they believed the movement remained centered around Black Lives Matter.

“It has always been about Black Lives Matter,” Avalos said. “I disagree with the notion that it got co-opted and was not about Black lives. It’s just messy because there are many factors going into it.”

“Black people are out here, indigenous folks, and other people of colour are out here,” Clarke said. “We’re serving food, we’re making policy decisions, and we’re here. There’s this partial kind of erasure that happens at the same time when we’re saying that the movement is all white.