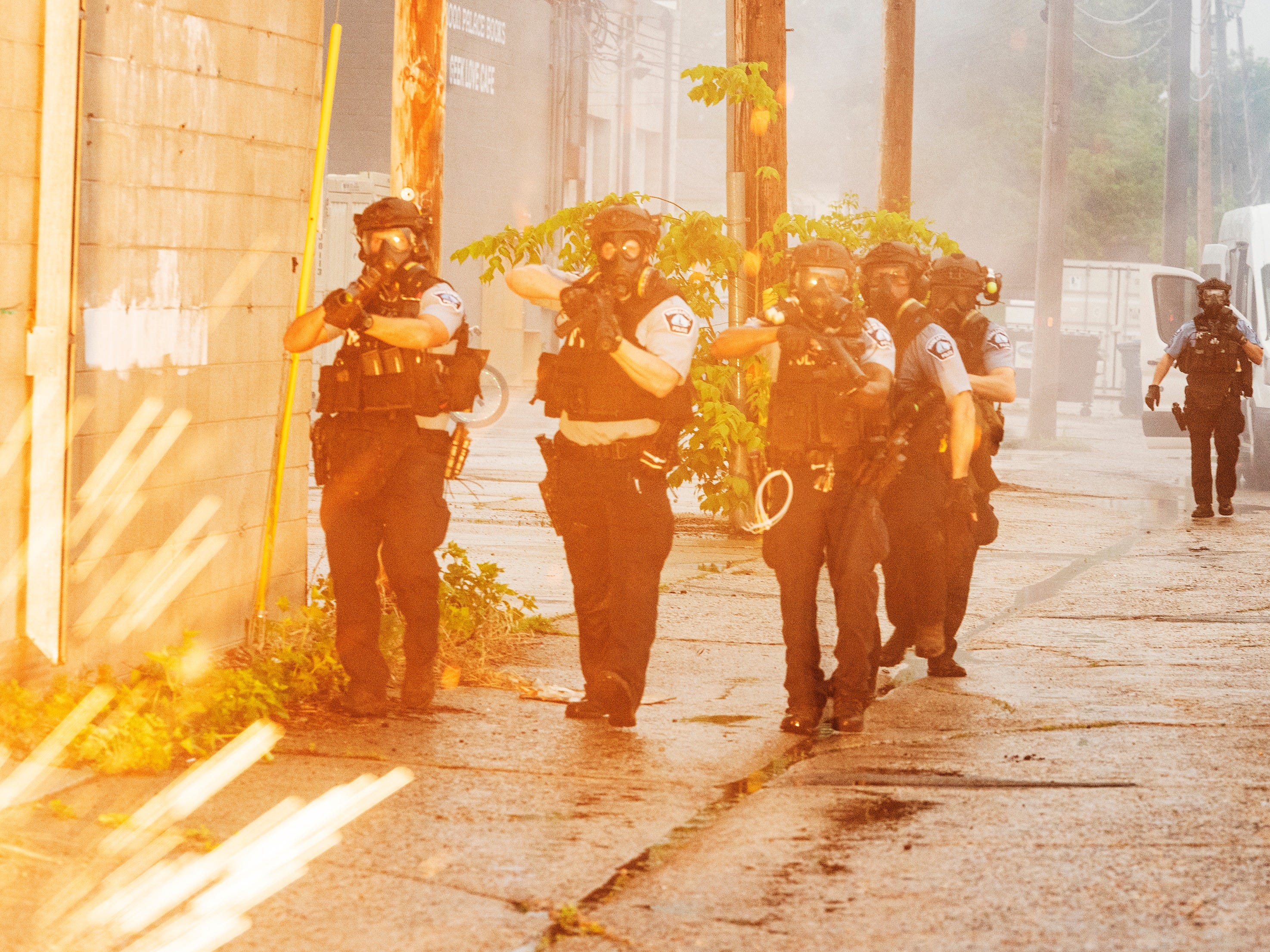 Richard Tsong-Taatarii/Star Tribune via Getty ImagesPolice officers near the Minneapolis 3rd Police Precinct on Tuesday during protests against George Floyd’s death. Floyd, a black man, died after a white officer, Derek Chauvin, knelt on his neck for more than eight minutes.

Two of the police officers involved in the arrest of George Floyd have a history of violent incidents.

Floyd’s death in a hospital after the arrest became a national flash point for racial injustice Tuesday after footage circulated of a police officer kneeling on his neck for eight minutes. Activist groups have called it a “public lynching,” and protesters have clashed with the police in Minneapolis.

Four officers, including Derek Chauvin, the officer seen kneeling on Floyd’s neck, were fired from the Minneapolis Police Department following Floyd’s death. State authorities and the FBI are investigating the case, and no charges have been brought against the officers.

This was not the first time Chauvin had been involved in a violent incident during his 19 years in the Minneapolis Police Department. He was involved in violent incidents before, including three police shootings. And he has been the subject of 10 complaints filed to the city’s Civilian Review Authority and the Office of Police Conduct.

Another officer in the video, Tou Thao, has a record of similar incidents. He settled an excessive-force lawsuit out of court in 2017.

In 2006, Chauvin was among six officers to respond to a stabbing, according to a 2016 report from the Minnesota activist group Communities United Against Police Brutality.

The report said Wayne Reyes, who was suspected of stabbing his girlfriend and a friend, was stopped in his truck by the responding officers. Six police officers fired upon and killed him, according to the report, which said the police accused Reyes of pointing a shotgun at the officers.

Two years later, just after 2 o’clock one morning in 2008, Chauvin responded to a 911 domestic-assault call in the Phillips neighbourhood of Minneapolis, the Pioneer Press reported.

Chauvin and his police-force partner entered the home, confronting Ira Latrell Toles, whose partner had made the 911 call. Toles ran from the pair, but “they caught and tried to subdue him,” a police statement said. The statement said Toles “grabbed at one of the officer’s guns,” and Chauvin shot him in the torso.

Earlier in 2008, the department awarded Chauvin a medal for his valor in response to an incident with an armed man, according to the Pioneer Press.

The Minneapolis Police Department did not immediately respond to a request for Chauvin’s full service record. 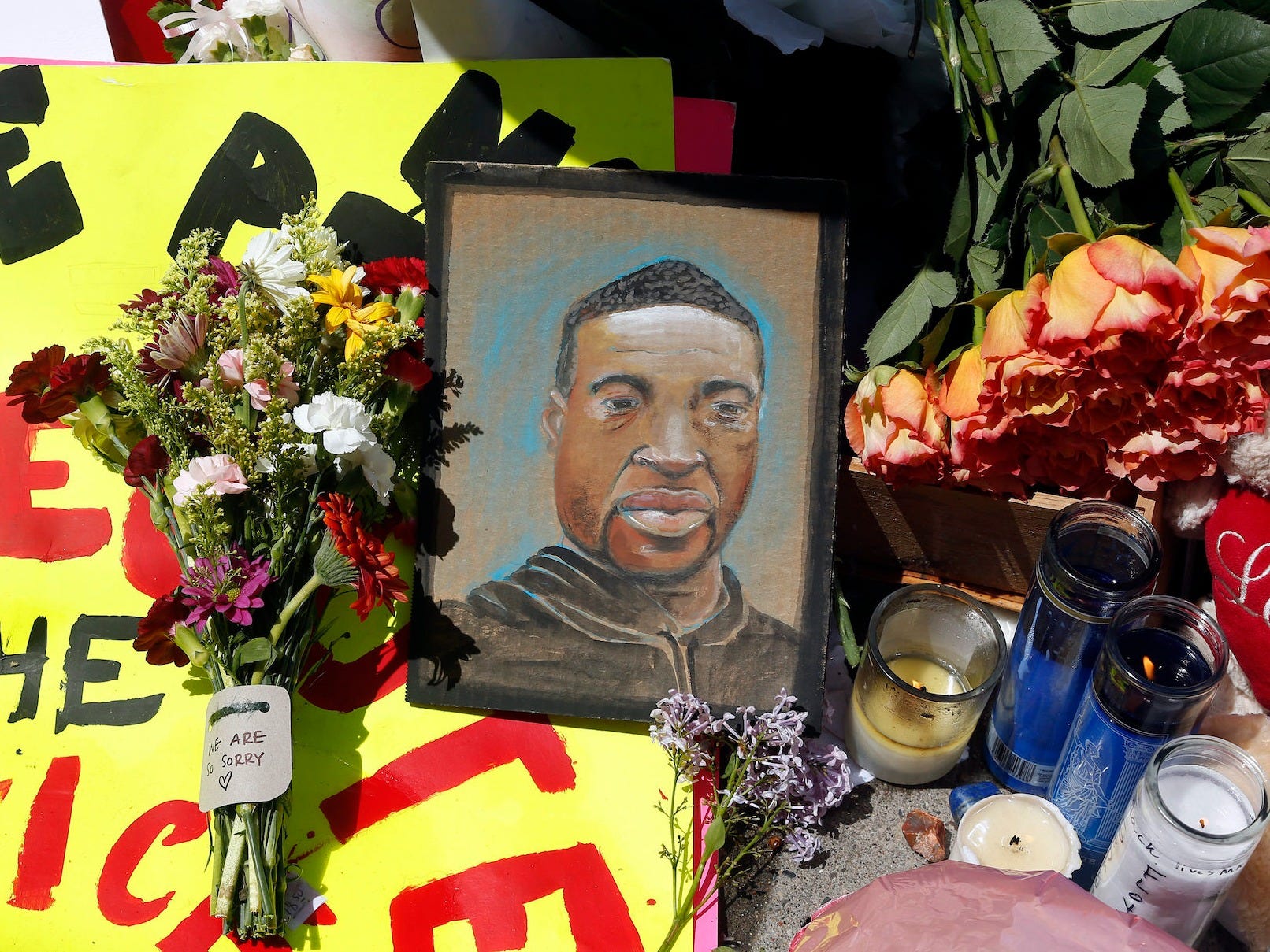 AP Photo/Jim MoneA chain portrait of Floyd was part of the memorial for him Wednesday near the site of his arrest.

In 2011, Chauvin was involved in a third police shooting.

He was among five officers to respond to reports of a shooting. Leroy Martinez, a 23-year-old Alaska Native, was spotted running from the scene, and the officers gave chase, local news reported.

The police said Martinez brandished a pistol as he fled. Terry Nutter, one of the responding officers, shot Martinez.

An eyewitness account, reported by the Star Tribune, challenged the police’s claim that Martinez was holding a pistol when he was shot.

“He had no reason to shoot that little boy,” Delora Iceman told the Star Tribune. She said Martinez had dropped the weapon and held his arms in the air before the police shot him.

During his nearly two decades with the Minneapolis Police Department, Chauvin has been the subject of several internal complaints, according to a CUAPB database.

In three separate reviews from the Civilian Review Authority, he was found to have used “demeaning tone,” “derogatory language,” and “language – other.” No other details were available.

He has also been the subject of seven reviews by the local Office of Police Conduct. Each review concludes: “Closed – No discipline.” No other details were available.

Thao, the officer who stood guard as Chauvin knelt on George Floyd’s neck, settled an excessive-use-of-force lawsuit for $US25,000

Thao, who completed police-academy training in 2009, was sued over claims of excessive use of force in 2017.

Lamar Ferguson, the plaintiff, was walking with a pregnant woman in 2014 when Thao and another officer, Robert Thunder, stopped and searched the pair, according to the lawsuit.

The complaint said Ferguson withstood “punches, kicks, and knees to the face and body” while “defenseless and handcuffed” that caused him to “suffer broken teeth as well as other bruising and trauma.” 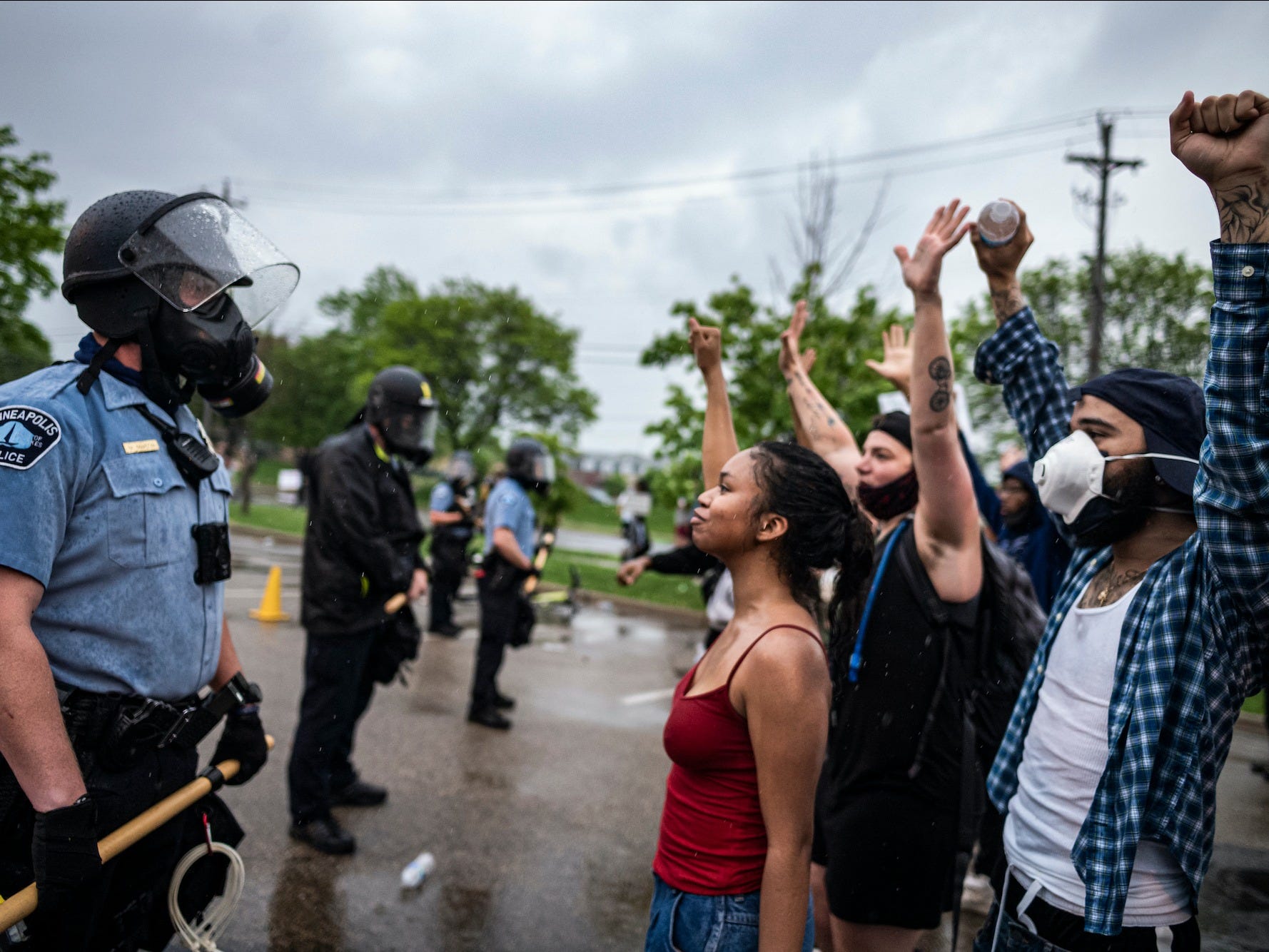 Richard Tsong-Taatarii/Star Tribune via Getty ImagesPeople facing off with the police near the Minneapolis 3rd Police Precinct. People gathered at Chicago Avenue and East 38th Street during a rally in Minneapolis on Tuesday.

The officers took Ferguson to a local hospital for treatment. When they escorted him to jail afterward, Thunder left him in a “T-shirt and underpants” despite hospital staff’s recommendation that Ferguson should be allowed to put on clothing and threw the hospital discharge papers in the trash, according to the lawsuit.

In a deposition, Thao said he arrested Ferguson because of an outstanding arrest warrant, adding that he punched Ferguson after one of his hands slipped out of the handcuffs, the Star Tribune reported.

“He tries to pull away,” Thao said. “And he puts his hands on me and tries to give me a stiff arm in a way to try to get me off of him. After – at this point, he’s actively resisting arrest. He – so I had no choice but to punch him. I punched him in the face. It causes him to pause a bit, which gives Officer Thunder the time to come around and help.”

The lawsuit was settled out of court for $US25,000, one of Ferguson’s attorneys told the Star Tribune.

Correction: A previous version of this article incorrectly said Chauvin and an officer named Terry Nutter crashed into a vehicle in 2005, killing all three passengers. Chauvin and Nutter did not crash into the vehicle. A car they were chasing did.