Colombian delivery app Rappi is yet another company turning to robots to reduce reliance on human workers during the coronavirus pandemic.

In addition to Colombia, Rappi operates in Mexico, Peru, Chile, Uruguay, Argentina, and Brazil. Last spring, SoftBank invested $US1 billion – one-fifth of its Innovation Fund for Latin America – in the startup. It was founded in 2015, and other investors include Sequoia Capital, Andreesen Horowitz, and Y Combinator.

Colombia is currently under a lockdown set to end in May, though it may be extended again. Earlier this month, Bloomberg reported on the lack of coronavirus testing throughout Latin America, making it difficult to assess how widespread the virus is in the region.

Like in other countries, the Colombian delivery app is using robots to complete orders at a time when people are at risk of catching the virus from interacting with others. So far, the robots are part of a pilot in Medellin, with potential to expand.

Rappi is using robots for deliveries in Medellin, the capital of Colombia. Typically, Rappi works similarly to GrubHub or DoorDash, with delivery drivers picking up orders and bringing them to customers’ doors. 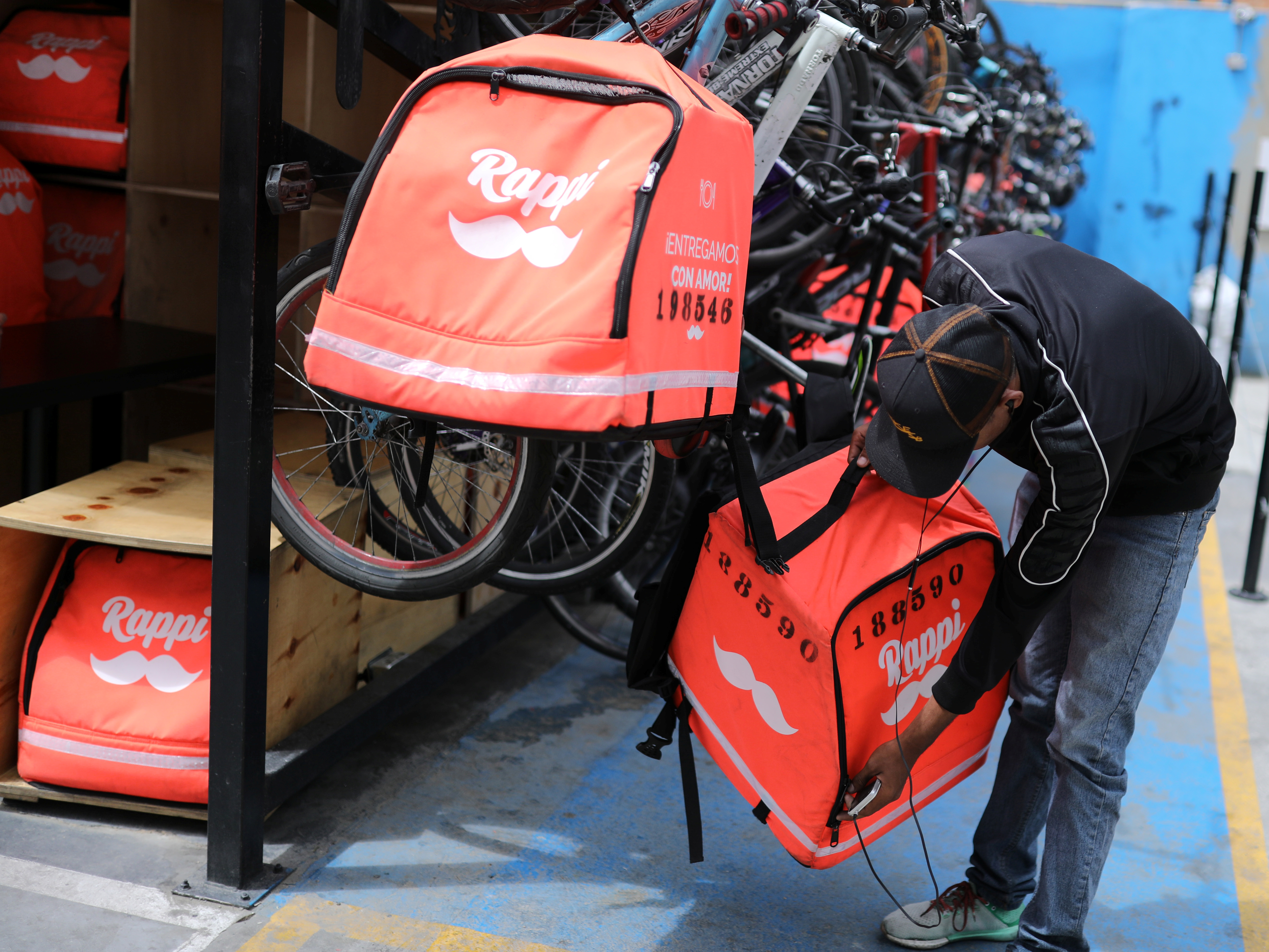 As the coronavirus spread between people, options for contactless delivery became more popular. Deliveries in the pilot program use Kiwibot robots, from a California company with a Medellin office. The four-wheeled delivery robots have orange flags to call attention from walkers, drivers, and bikers. Customers stuck at home because of the coronavirus can order and pay for meals digitally, and then last mile delivery is completed by the robots. 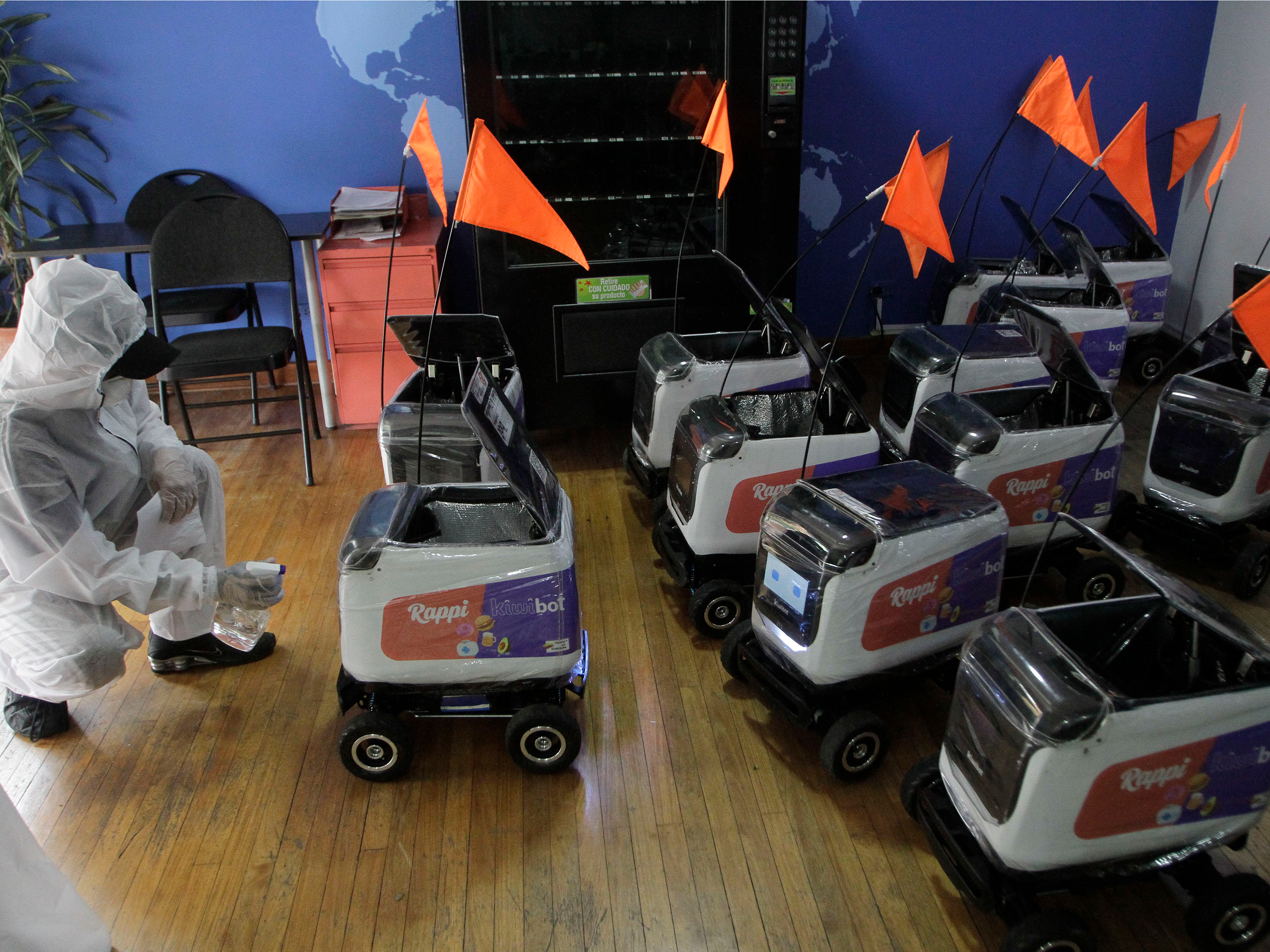 Robots can carry deliveries up to five square inches in size, and are disinfected between orders. 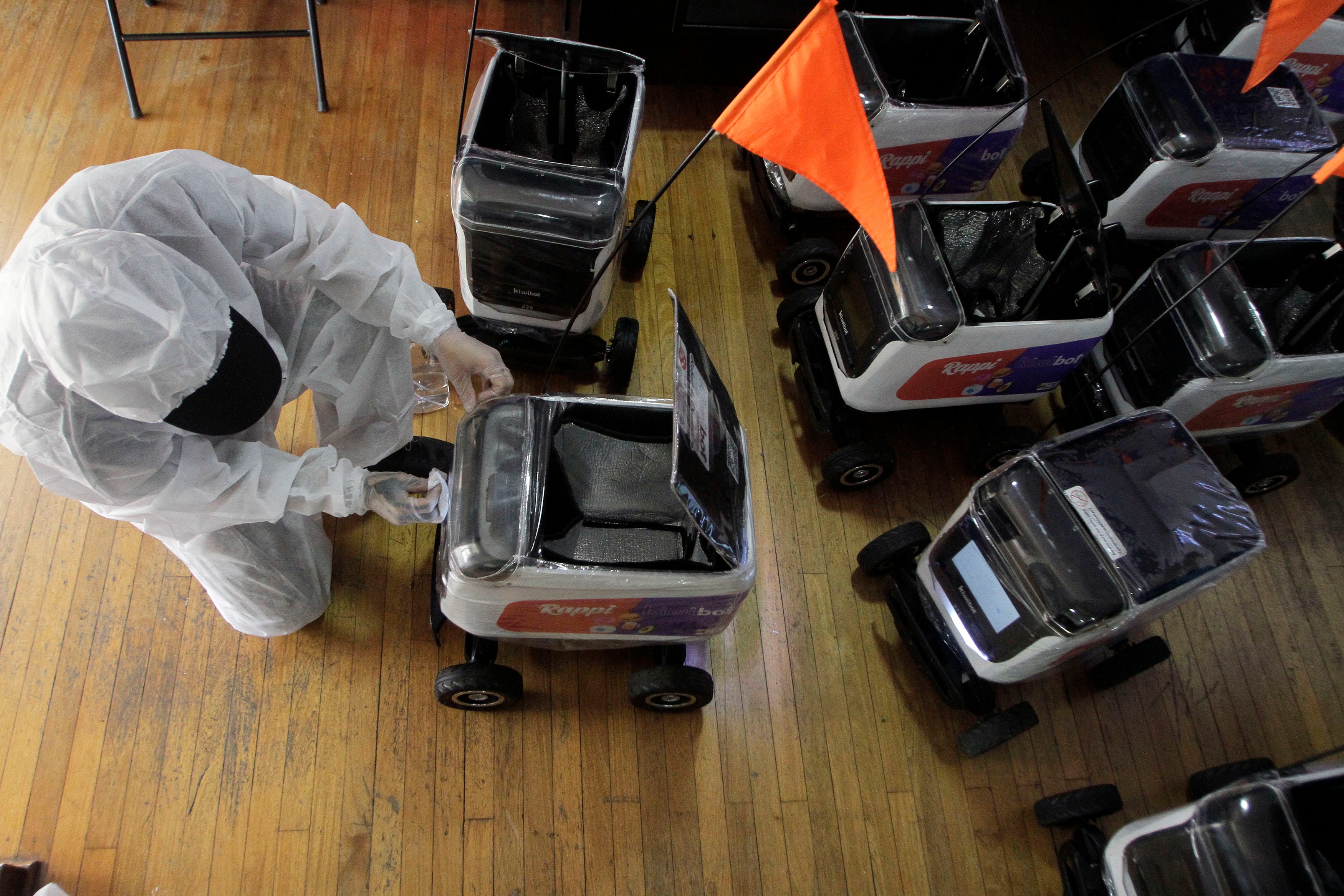 Kiwibots have a stereo camera system to sense its surroundings as it moves. The sensor system allows it to react to lights and obstacles. Kiwibots are equipped with corner recognition, which allows them to create safe paths on footpaths. 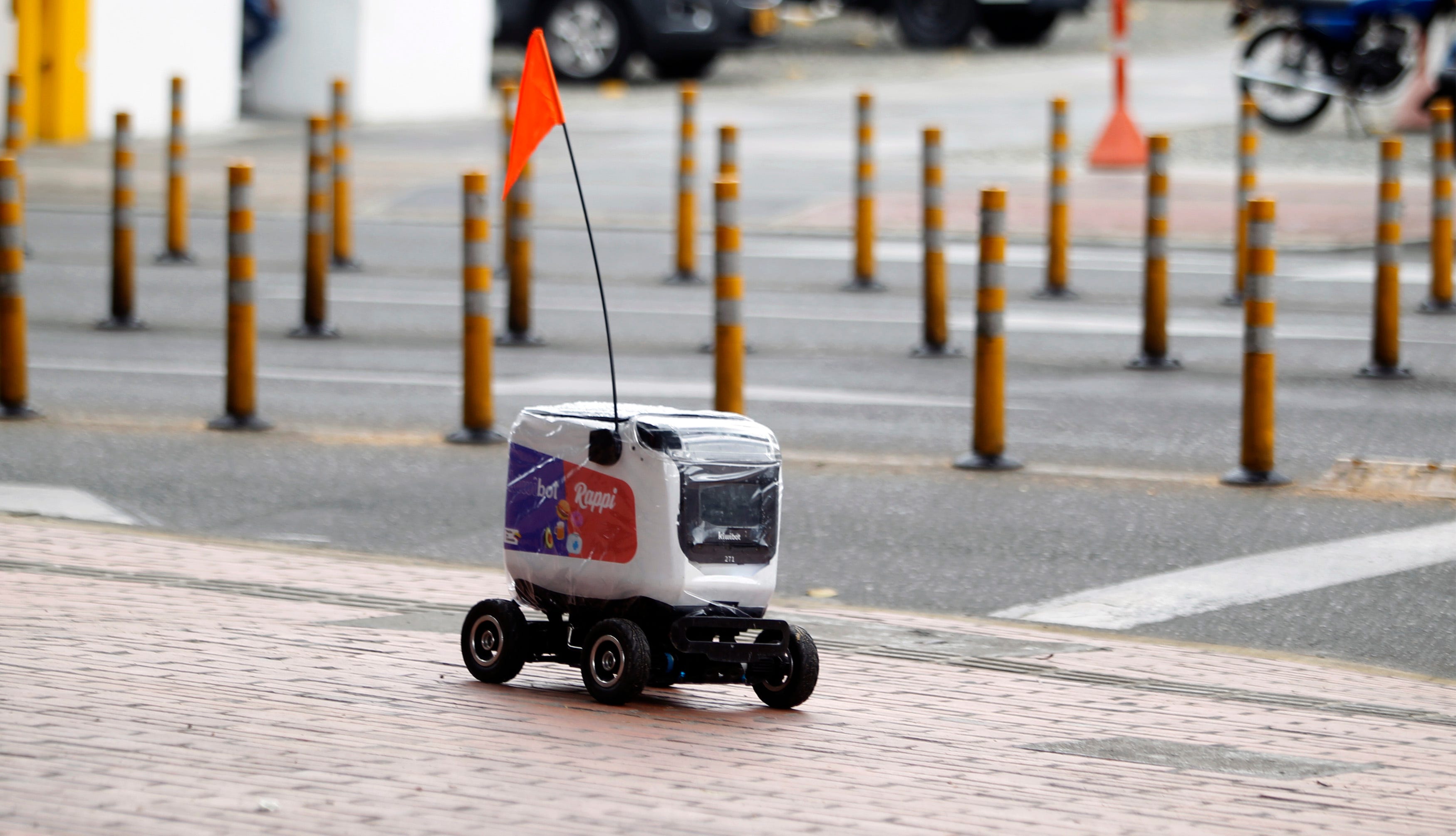 Kiwibot emphasised its robots ability to “seamlessly mesh into the fabric of urban landscapes,” with technology like street crossing mode.

Rappi says it completes about 120 deliveries each day with the 15 robots in the pilot area.

It plans to run the program until July, and then potentially expand to other cities. 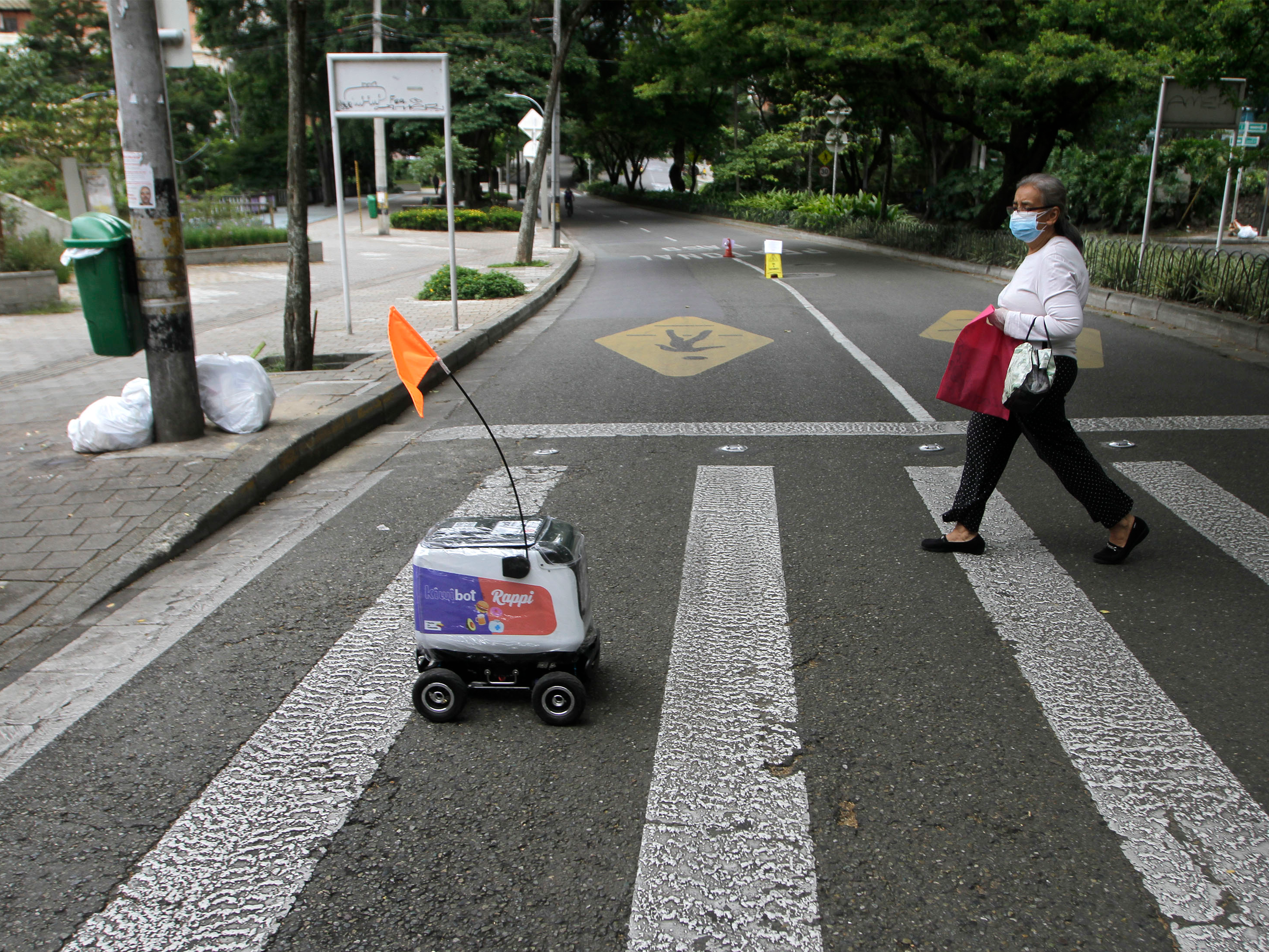 Kiwibots have previously been used for deliveries at colleges including UC Berkeley, and Kiwibot says it has made more than 30,000 deliveries since it started in 2017.