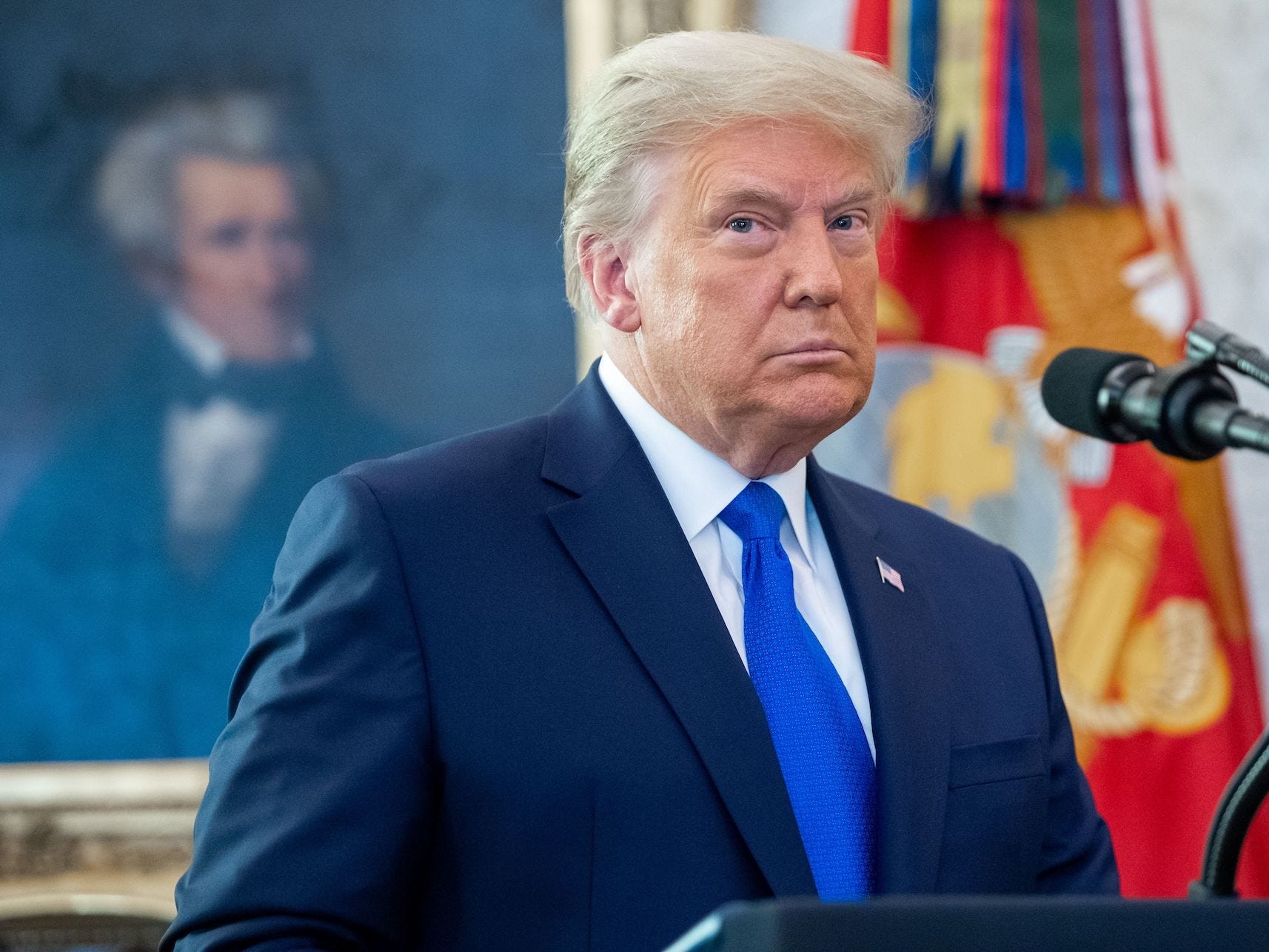 Photo by SAUL LOEB/AFP via Getty ImagesUS President Donald Trump looks on during a ceremony presenting the Presidential Medal of Freedom to wrestler Dan Gable in the Oval Office of the White House in Washington, DC on December 7, 2020.

The mayor and other political leaders have blamed President Donald Trump for inciting the deadly violence.

“The City of New York will no longer have anything to do with the Trump Organisation,” he added.

The Trump Organisation has contracts with New York City to run a city-owned golf course in the Bronx as well as two ice skating rinks and the carousel in Central Park. The Trump Organisation makes around $US17 million in annual revenue from these contracts, the Washington Post reported, citing Trump’s most recent financial disclosures.

Trump will likely challenge the decision in court, Mark Levine, a Democratic NYC council member, told Insider, but said this would be unsuccessful.

Levine has been pushing the city to make the decision for years, saying the city had no legal reasons to delay cutting ties with Trump’s businesses. Wednesday’s announcement as a “long time coming,” he told Insider, listing both moral and business motivations for the decision.

Levine called the Trump Organisation’s connections with the four businesses a “stain on the city,” and noted that the Trump branding was likely detracting people from visiting the attractions.

“I can’t tell you how many people have told me that they just can’t bear to go to Wollman Ice Rink or the Central Park Carousel because of [Trump’s] association with it,” he explained.

The Trump Organisation did not immediately respond to a request for comment.

Congress met last Wednesday to certify the result of the US presidential election. Fuelled by months of conspiracy theories and baseless allegations of election fraud pushed by President Donald Trump and his backers, rioters stormed the Capitol. Five people died in violence connected to the siege.

Mayor de Blasio said Tuesday the city’s legal team was assessing options in dealing with the contracts, noting that they were looking at it “very, very carefully and very quickly.”

“The president incited a rebellion against the US government â€” clearly an unconstitutional act, and people died,” he said.

One entity that still hasn't?

The City of New York, which continues to give his company the privilege of running four marquis businesses in NYC Parks.

This isn’t the first time the city has looked to cut ties with Trump. In 2015, de Blasio tried to end the contracts after Trump called Mexican people “rapists” who bring drugs and crime, but his attempts were unsuccessful.

And branding with Trump’s name was removed from the two skating rinks in 2019, the New York Times reported.

“Almost as soon as Trump launched his campaign in 2015, and it was clear he was going to be a major force for bigotry, we started to organise to get these contracts cancelled,” Levine, who previously chaired the city’s committee on parks and recreation, told Insider. “I’m just incredibly relieved it’s finally happening.”

Legal experts told the New York Times the city may struggle to end the contracts because of clauses in the agreements determining when they can be cancelled. But the contracts have severability “at will,” Levine told Insider.

“There’s ample precedent for cancelling a park’s concession contract when one of the proprieters has criminal entanglements,” he said.

Top US firms have either cut ties with Trump or backed away from political contributions following last week’s siege. Deutsche Bank and Signature Bank, two of Trump’s favoured lenders, have said they will no longer do business with him. Some companies are specifically withdrawing contributions to Republican lawmakers who objected to Biden’s certification as president, while others are pulling the plug on all political donations for the time being. E-scooter startup Lime, meanwhile, has scratched Trump’s hotels from its corporate travel list and vowed never to give money to businesses connected to Trump or Jared Kushner.