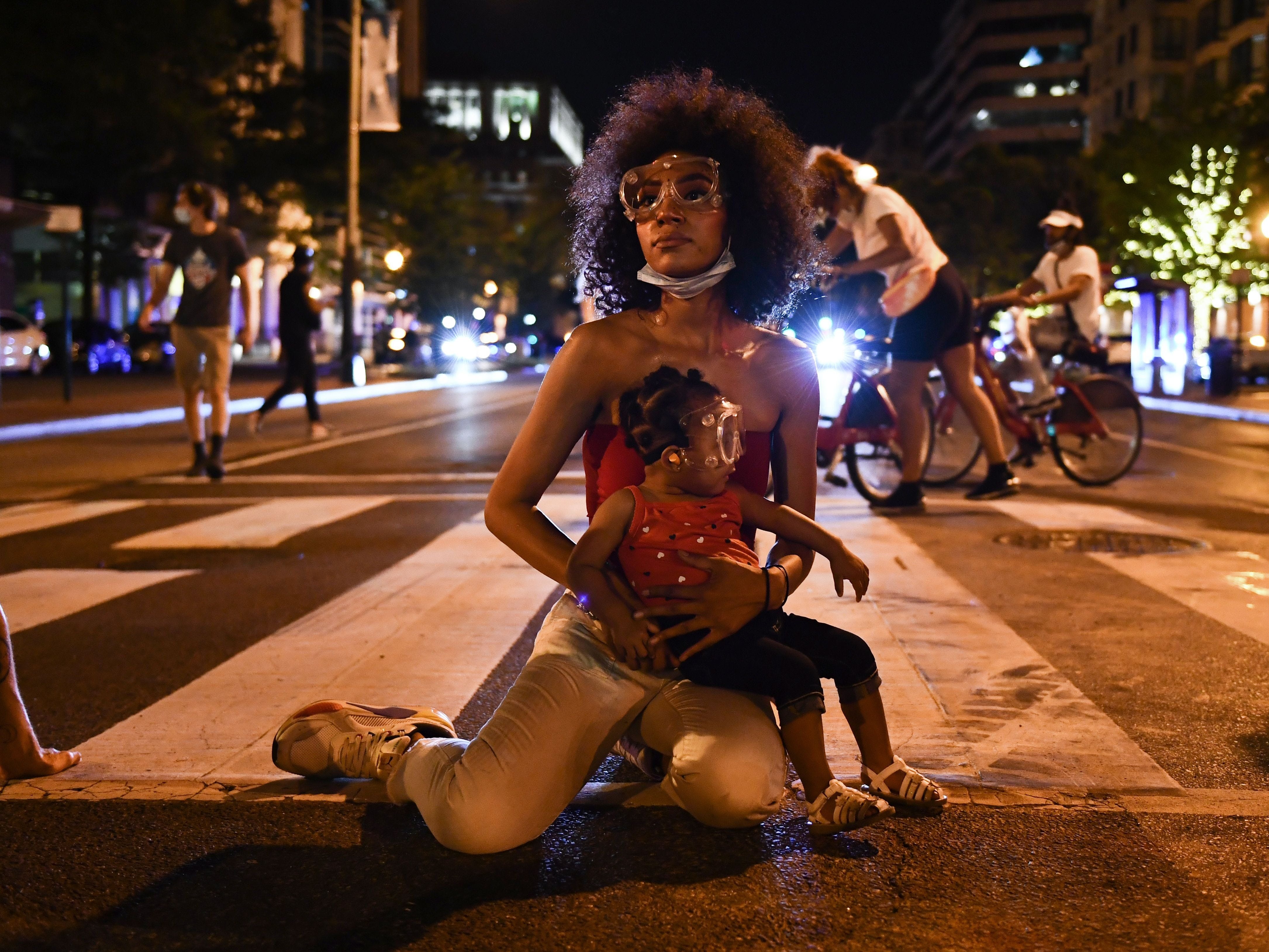 Brendan Smialowski/AFP via Getty ImagesA demonstrator and her daughter sit in the street near the White House as protests triggered by the death of George Floyd while in police custody, continue on June 23, 2020, in Washington, DC.

Over the past few days, protesters have attempted to erect an autonomous zone in Washington, DC, which they called the “Black House Autonomous Zone,” or BHAZ.

But that effort has been dashed by DC police, who are sweeping through the BHAZ to clear it out.

The BHAZ took its inspiration from a similar autonomous zone in Seattle’s Capitol Hill neighbourhood, initially known as the CHAZ, and later the CHOP. Both spaces, designed to be cop-free and communal, have come under fire from President Donald Trump.

“There will never be an ‘Autonomous Zone’ in Washington, D.C., as long as I’m your President,” Trump tweeted on Tuesday. “If they try they will be met with serious force!”

Just blocks from the White House, near Lafayette Square, protesters could be seen erecting tents, barricades, and fencing around the emergent BHAZ on Monday, The Washington Post reported. Hours later, police attempted to clear the encampment, dispersing crowds with chemical irritants.

Just arriving at the scene – cops have shut down our to McPherson Square. This is one entrance to the BHAZ pic.twitter.com/ZZ6CAQI42D

Protesters briefly retook the space, but police responded again on Tuesday. DC officials told The Post that the BHAZ was a public-safety issue and would not be allowed to stand. Peaceful protests would not be disrupted, the officials added, and Trump’s message about “serious force” did not influence their response to the BHAZ.

Protesters “cannot set up tents or grills in the middle of our streets,” Police Chief Peter Newsham told The Post. “We’re going to keep our streets clear and try to communicate to people involved in that behaviour to move.”

As some crowds sought to establish the BHAZ, others tried to topple a statue of Andrew Jackson, the seventh president of the United States, in Lafayette Square.

As president, Jackson signed into law the Indian Removal Act of 1830, which expelled some 50,000 Native Americans from their land and pushed them west. Thousands of Native Americans were killed during the conquest, many thousands fell sick, and some 25 million acres of their land was expropriated – much of which was given to slavers and American settlers.

“I have authorised the Federal Government to arrest anyone who vandalizes or destroys any monument, statue or other such Federal property in the U.S. with up to 10 years in prison,” Trump tweeted on Tuesday, “per the Veteran’s Memorial Preservation Act, or such other laws that may be pertinent…..”