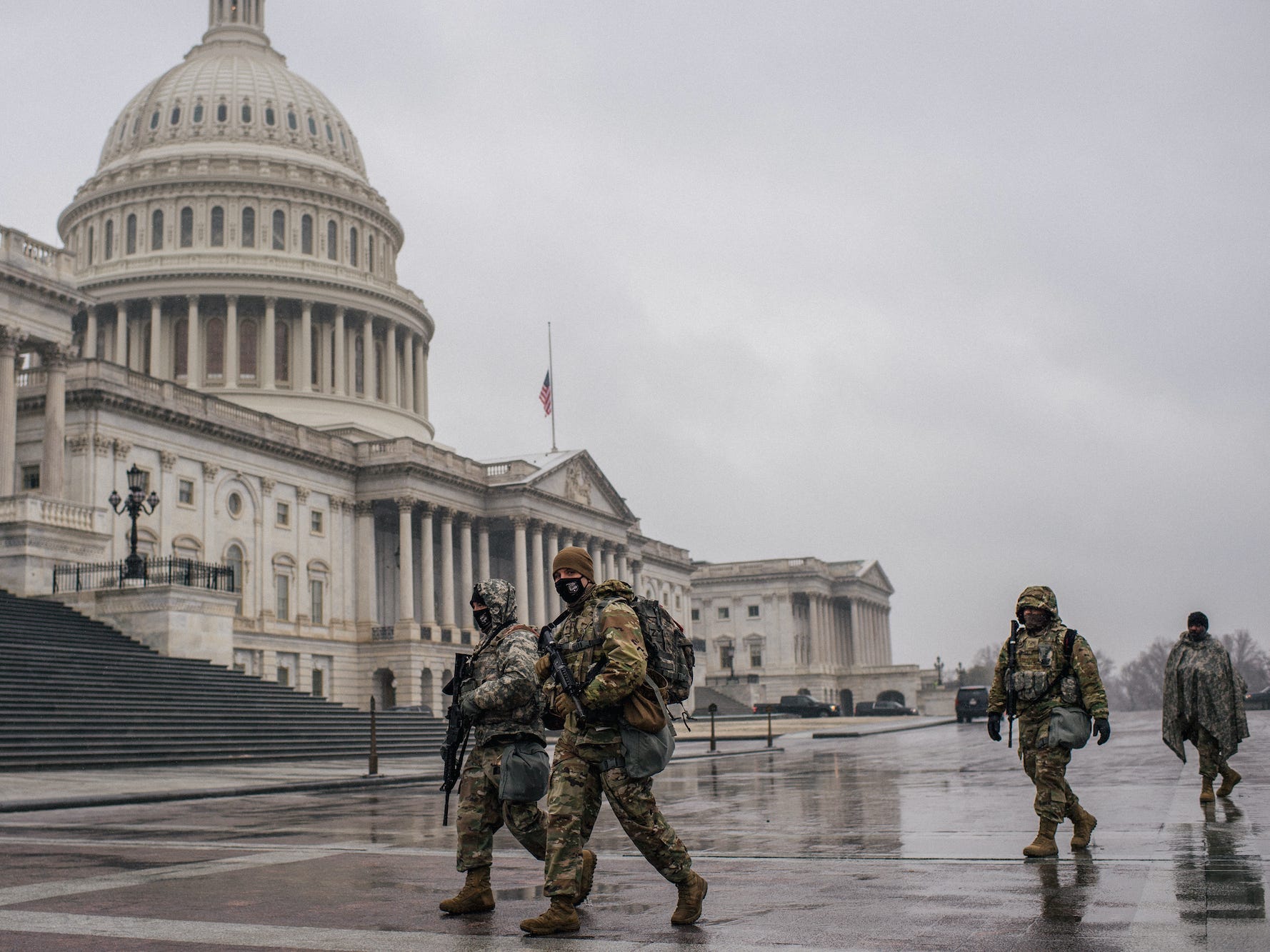 Brandon Bell/Getty ImagesMembers of the National Guard walk through U.S. Capitol grounds following the conclusion of the second impeachment trial of former President Donald Trump on February 13, 2021 in Washington, DC.

Almost 5,000 National Guard troops are expected to remain in Washington, DC, until mid-March, according to CNN.

This is partly due to fears of potential violence from followers of the QAnon conspiracy theory on March 4, the media outlet reported.

The request for 4,900 troops to stay until March 12 was made by US Capitol Police, defense officials told CNN.

It was later confirmed by House Armed Services Committee’s top Democrat, according to Right Wing Watch.

Some QAnon adherents believe that former President Donald Trump will be sworn in on March 4.

This date’s significance is rooted in a bizarre conspiracy theory that a law enacted in 1871 secretly turned the US into a corporation.

Members of the “sovereign citizen” movement, a loose grouping of anti-tax Americans, believe that all presidents in the last 150 years have been illegitimate. In the eyes of this movement and the QAnon followers who now subscribe to it, the last legitimate president was Ulysses S. Grant.

Grant was sworn in on March 4, as were all other commanders-in-chief up until the 1933 introduction of the 20th Amendment.

Therefore, the conspiracy theorists are clinging to the hope that Trump will be sworn in on March 4, 2021. This, they falsely believe, would make him the US’s 19th president.

Rep. Adam Smith, who chairs the House Armed Services Committee, expressed his concerns about the security threat presented by this conspiracy theory.

“Some of these people have figured out that apparently 75 years ago, the president used to be inaugurated on March 4,” he said. “OK, now why that’s relevant? God knows. At any rate, now they are thinking maybe we should gather again and storm the Capitol on March 4 … that is circulating online.”

There has been a constant security presence near the US Capitol building since the deadly insurrection on January 6.

During President Joe Biden’s inauguration, there were up to 25,000 National Guard troops stationed in DC.

As many as 5,000 members of the US National Guard were also stationed near the Capitol during Trump’s impeachment trial to address security concerns.