28-year-old Tyra Myricks makes 7 figures and has 5 side hustles. Here's how she typically spends a day. 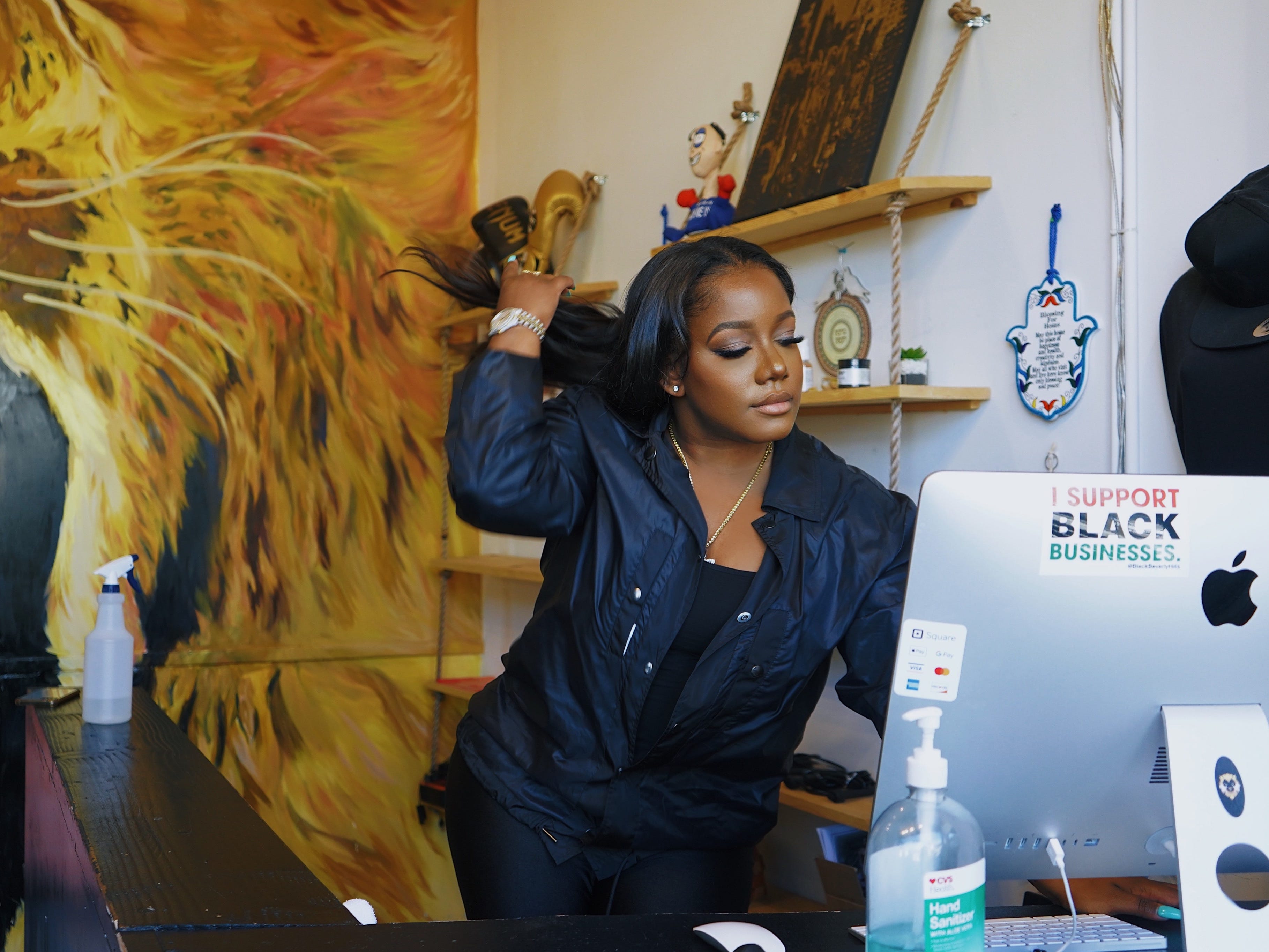 Courtesy of Tyra MyricksTyra Myricks is the daughter of legendary rapper Jam Master Jay from the hip hop group Run-D.M.C.

If the Land of Side Hustles had a queen, it would surely be 28-year-old Tyra Myricks, daughter of hip hop legend Jam Master Jay from the group Run-D.M.C. It all began in 2009 when she launched a fashion label while still in high school that eventually helped pay her way through college. She initially went to university to study pre-med but dropped out after the label saw her earning over double her tuition.

She took the streetwear world by storm with celebrity partnerships, and advertising on Instagram’s TMZ the Shade Room. In 2012, she rebranded the company now known as Wealth as high fashion streetwear.

“It’s not the business you do, it’s what you do differently,” she told Insider.

Aside from owning a fashion label, and branding and merchandising company, she’s also the co-owner of The Method, Los Angeles’ first Black-owned gym. Myricks is opening a pizza shop with T’yanna Wallace, daughter of rapper Biggie Smalls on June 12, and she’s co-creating a platform to provide young entrepreneurs with resources to start their own businesses.

“It’s not an easy game,” she said of being an entrepreneur. “Everybody on the internet shows the glorious side, but nobody shows the treacherous side where it’s hard to get up in the morning.”

Her day job, of course, is working as director of design, merchandising, and development for Drake’s OVO lifestyle brand, which earns her six figures a year. In total, she makes about seven figures a year and says a secret to her success is knowing how to constantly be agile with the opportunities life brings.

To Insider, she breaks down how she puts that process to use on a typical day.

Waking up before the break of dawn, Myricks prays, takes a shower, gets dressed, and downs six espresso shots. Her first stop this morning is to The Method to prepare the gym for opening.

Around 6:30 a.m. she leaves the house and puts on gospel music as she drives downtown, trying to beat the morning traffic rush.

At 7 a.m. she opens the gym and gets breakfast

She arrives at the gym and inspects everything to make sure space was cleaned properly before closing the night before. She also folds extra towels and gets the system ready for patrons.

Myricks became co-owner in the gym after investing a substantial amount last year, though she declined to share how much she gave. There are no employees at the gym, though it has 17 independent contractors. It opened in a new location last summer in the middle of the pandemic. Myricks remembers that day clearly because a few days later, the city of Los Angeles shut down again due to COVID-19.

“It was a grand opening, grand closing,” she said. 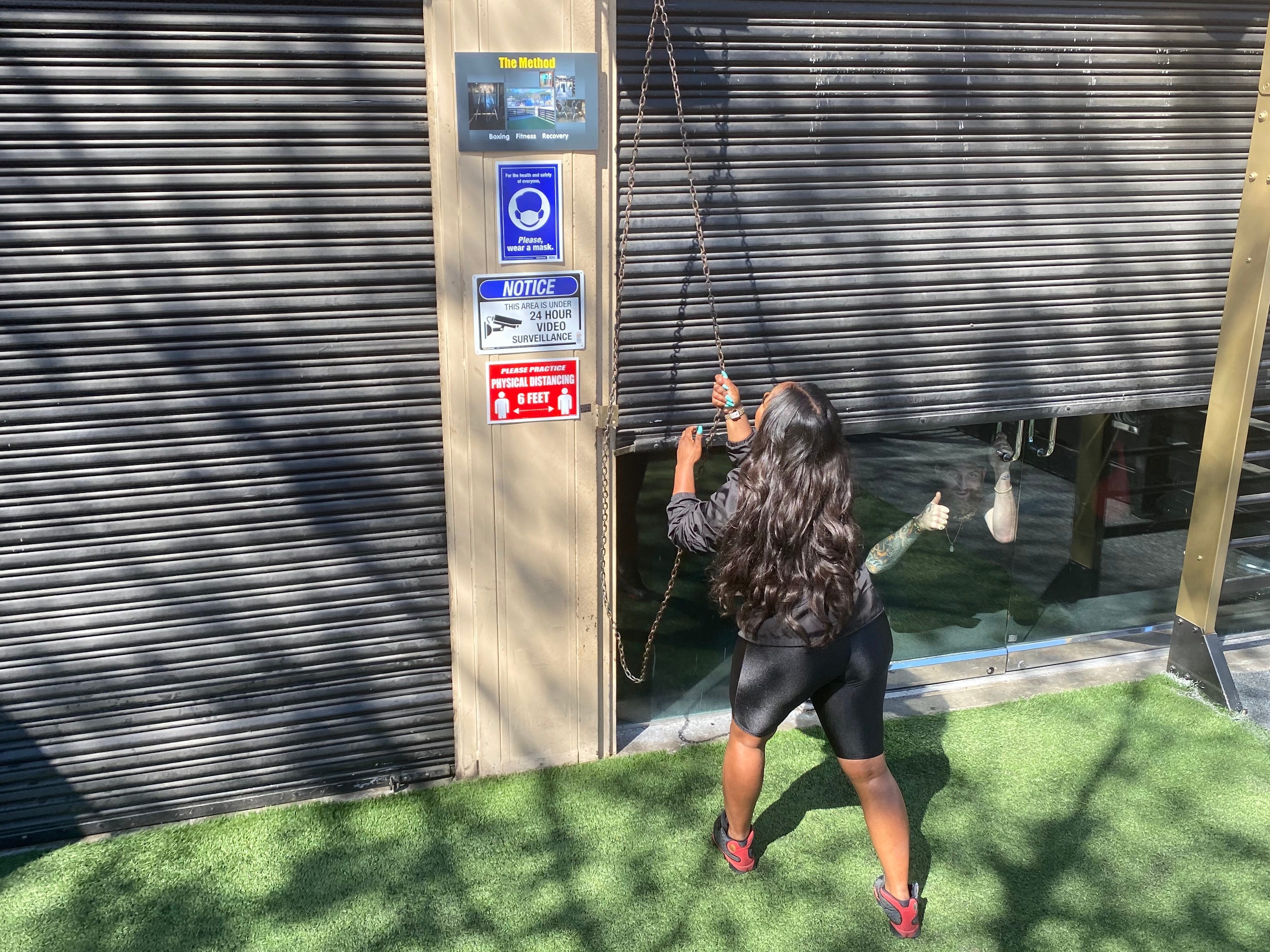 During the shutdown, they moved classes outdoors, which helped cover overhead costs (rent is $6,500 a month). Currently, the club has nearly 300 members, giving it a feel of exclusivity, which is something Myricks prizes in all of her entrepreneurial endeavors.

Membership is $99 a month, another reason to ensure service is top-notch. “What’s stopping someone from going to planet fitness for $30 a month?” Myricks said.

After opening the gym she gets breakfast. This day: a green smoothie.

Then, she preps for her day job

Myricks is also the director of design, merchandising, and development for rapper Drake’s OVO lifestyle brand. At 9:30 a.m., still at the gym, she prepares for a Zoom call with the OVO team to discuss upcoming projects. That lasts until about 11 a.m.

Cofounded by Drake in 2011, OVO is known for selling high-end streetwear and has done collaborations with Canada Goose, and the Major League Baseball, as well as having hosted pop-ups at Nordstrom and the once-popular retail store Colette in Paris. “I look at the recipe and formula a lot of successful people use and get little pieces of that to create my own recipe and formula to be successful,” she said. 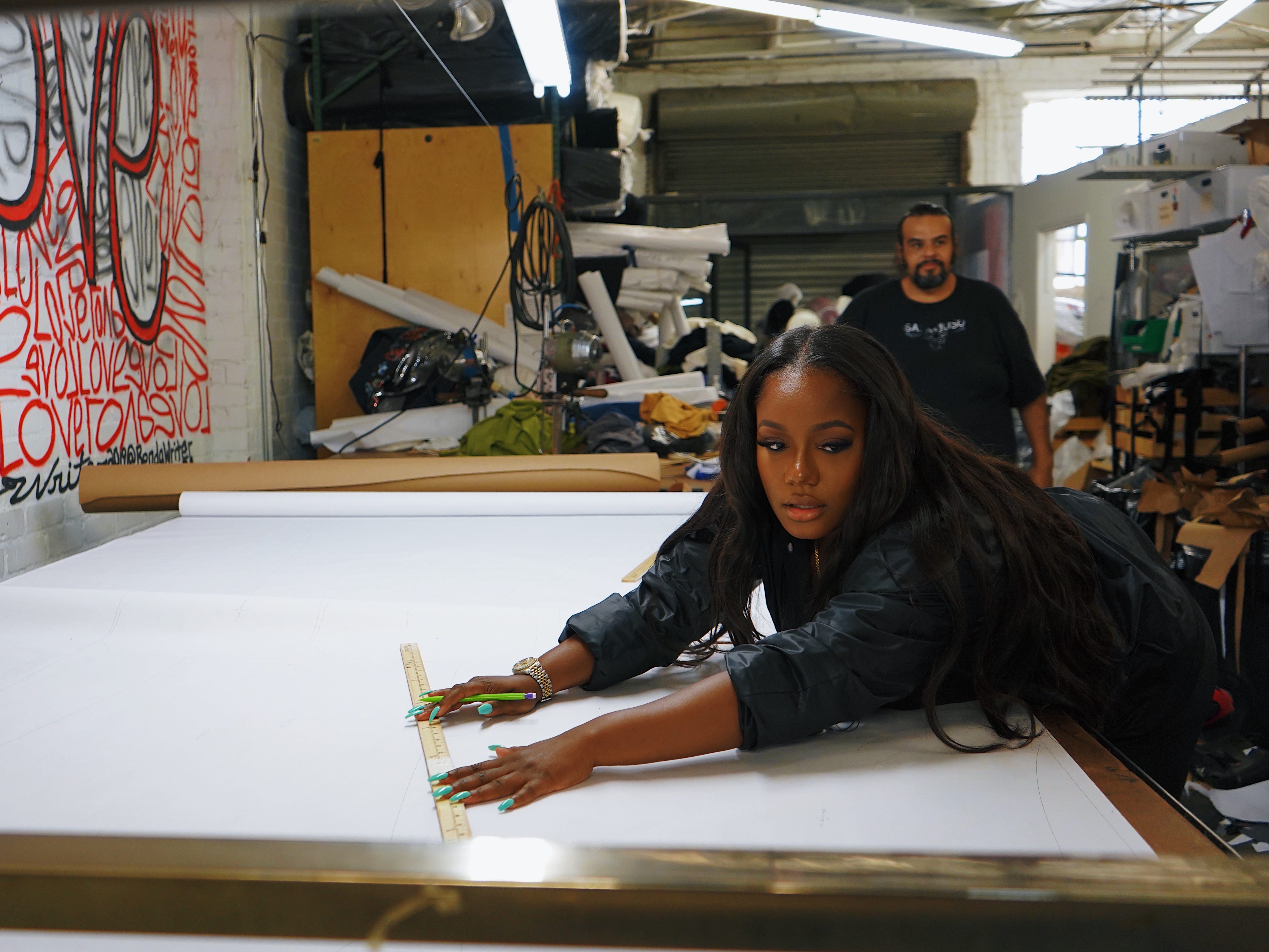 Afterward, another business partner meets her at the gym to discuss upcoming projects for the branding agency they own together. Drake offered Myricks a job after seeing some of the branding and merchandising work her agency did for an artist signed to his label. She moved from New York to Los Angeles in 2017 to take the job.

Without giving exact numbers, Myricks said she makes six figures a year from working at OVO, where she leads the design team, approves and denies designs, and deals with manufacturers overseas. “It’s a constant 24-hour job because China and other manufacturers are 12 hours ahead of us,” she said. “When you ask what is a day like – it’s literally a day. It’s a constant revolving door that never stops.”

At 11:28 a.m. she starts working on her fashion side hustle

Next, she heads to the factory she co-owns with a business partner and begins ordering fabric for her Wealth fashion line which she primarily sells online and in one store in downtown LA.

She also discusses plans with her business partner on renovating the space next door to expand the factory, makes sure production is on track and approves new patterns for sweaters. There are 16 people currently working for her company, and the brand produces about 2,500 units each week. Each item sells for between $13 and $1,300. 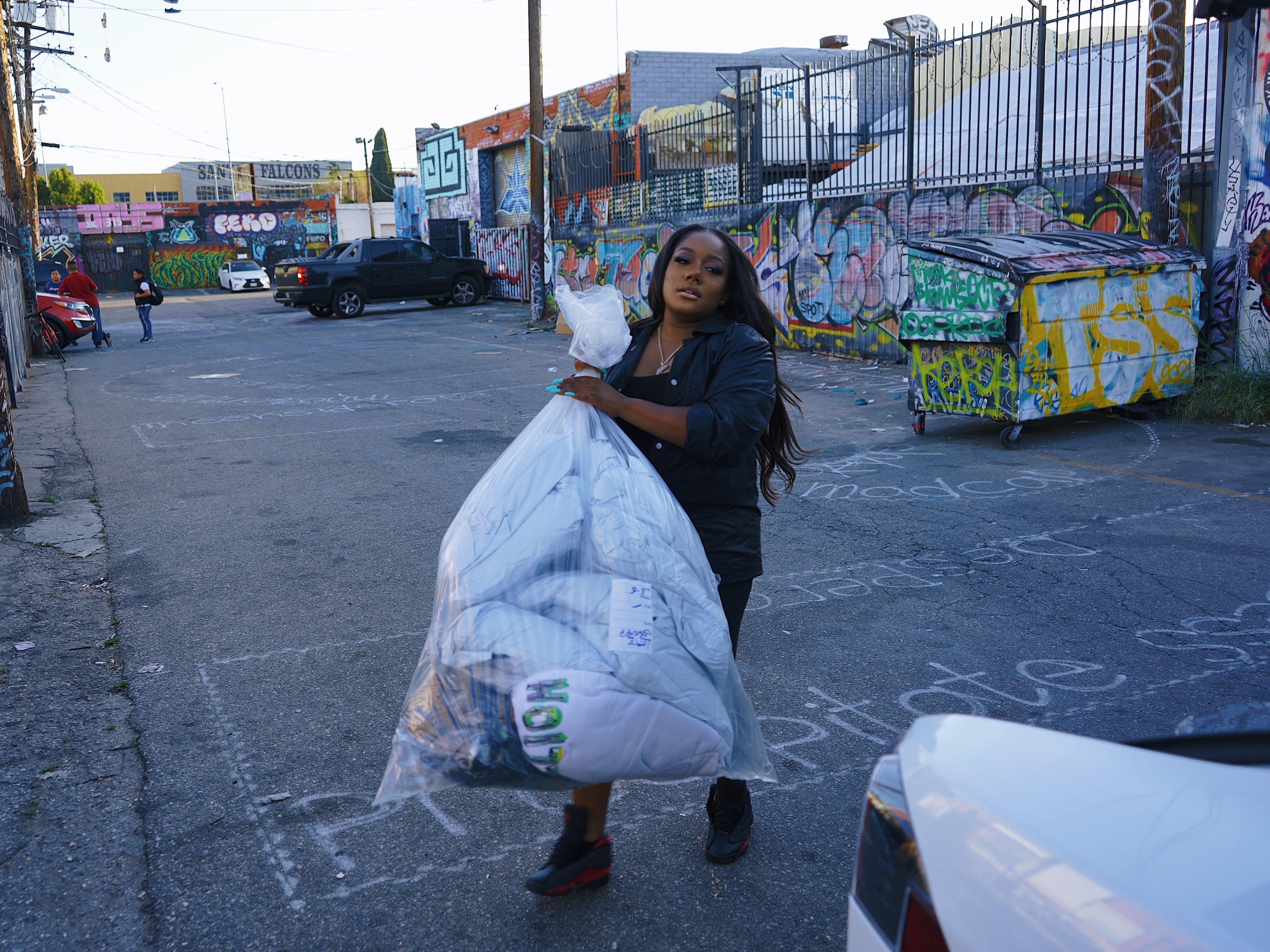 An assistant brings her lunch around noon, which today is a grilled chicken salad. Before eating it, however, she heads to the screen printer to drop off samples for Wealth’s upcoming fall/winter collection.

When she gets to Wealth headquarters around 2 p.m., she finally eats lunch as she packs all of the orders that arrived the day before, preparing to ship them to customers.

Next, she orders a double shot of espresso from Blue Bottle Cafe. Then, she keeps it moving.

Around 4 p.m. she finally ships off the Wealth packages, then heads to the Inflamed store downtown, the only brick-and-mortar location that sells Wealth. There, she restocks and checks inventory.

On to another side hustle

Next, she heads to a meeting at the pizza shop she’s opening called Juicy Pizza to discuss patio design and merchandise. Myricks said she came up with the idea of Juicy Pizza because, as a New Yorker living in Los Angeles, she felt there was “no good pizza in Los Angeles.”

The shop is set to open on June 12 as reported by LA Eater. The place will also sell merchandise designed by Myricks and will have an exclusive cannabis lounge. 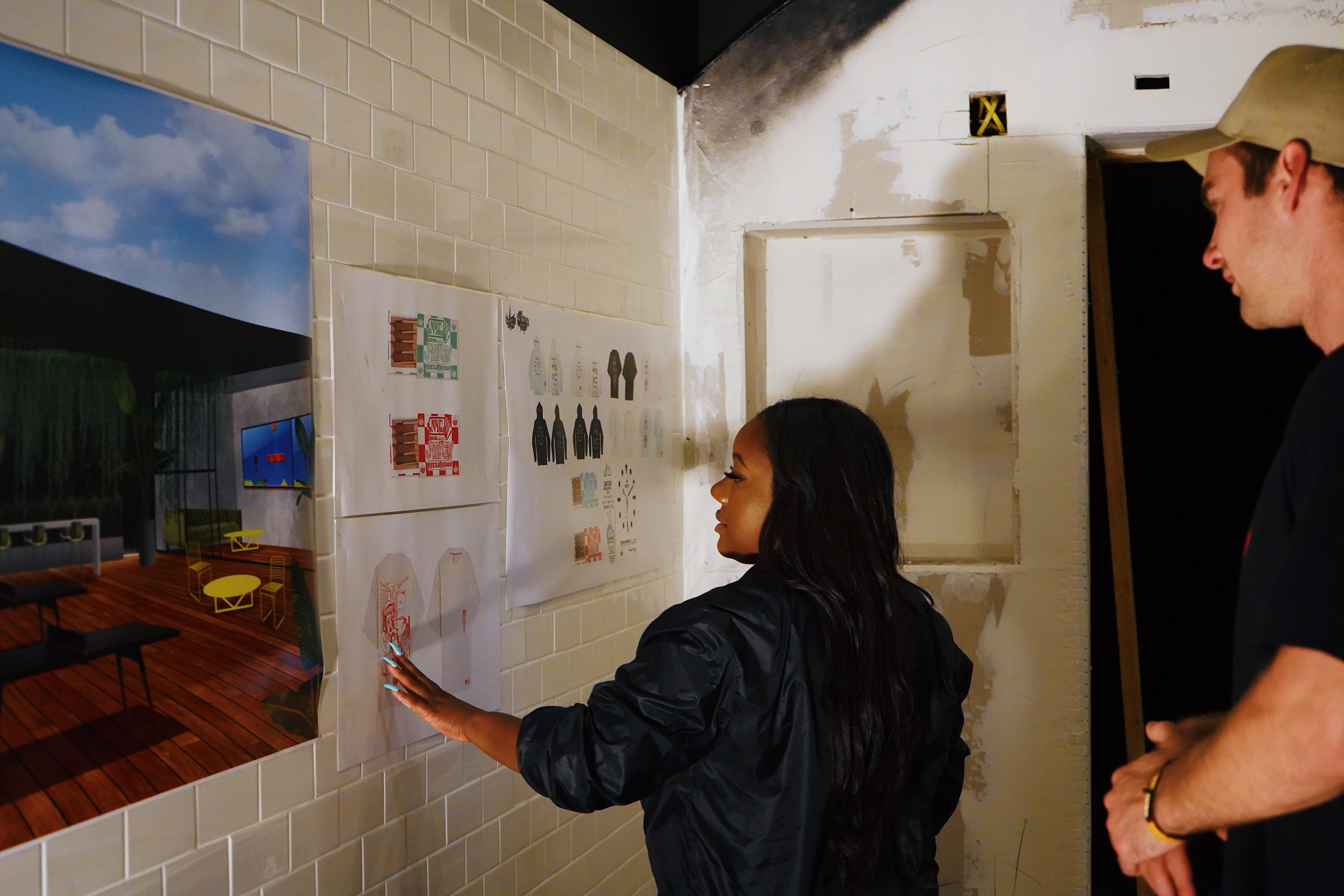 “The more I thought about how to bring that New York theme to Los Angeles, I felt, who represents New York more than Biggie Smalls?” she continued. So she called her friend T’yanna Wallace, daughter of the late rapper, and presented her with the idea. “She loved it,” Myricks said.

Myricks also knew the importance of reaching out to Wallace because, being the daughter of the late Jam Master Jay, she knows first hand what it’s like to have people profit from her father’s name and career. “I was like I don’t want you to invest anything,” she recalled telling Wallace. “Let’s just make money together. Let’s make moves.”

The shop is set to open later this year.

At 7 p.m. she meets two friends at a Latin restaurant called Dama downtown, where she orders a celery salad with pineapple juice, Mexican corn, and an Oxtail Tostada.

She picks up shipping bags from the storage unit before heading home.

Around 9 p.m. she finally arrives home and begins to unwind, if only for a moment. She answers emails before starting her next project, a website for celebrity client merchandise, which is part of the branding agency she co-founded.

Around midnight, she falls asleep. In five hours, she will get up and do it all over again.