“The choice for governor couldn’t be any more clear. John Bel Edwards, who answered our country’s call and served as a Ranger in the 82nd Airborne Division,” the ad’s narrator began, innocently enough.

But then the narrator tore into Vitter, who apologised in 2007 for being linked to the so-called DC Madam scandal.

“Or David Vitter, who answered prostitute’s call minutes after he skipped a vote honouring 28 soldiers who gave their lives in defence of our freedom,” the ad continued. “David Vitter chose prostitutes over patriots. Now the choice is yours.”

“Voters have a right to know who the candidates really are,” Mary-Patricia Wray, an Edwards campaign spokesperson, said in a statement announcing the ad. “David Vitter’s hypocrisy should not go unchecked, and this is yet another reason why Louisianans can’t trust him.”

The News-Star, a Louisiana newspaper, provided some of the context of the ad, which it reported will begin running Saturday:

The vote to which the ad refers was on House Concurrent Resolution 39 in the 107th Congress on Feb. 27, 2001 when Vitter was a U.S. representative. It honored soldiers killed by an Iraqi missile attack on Feb. 25, 1991, during Operation Desert Storm. Records do show Vitter missed the vote.

Edwards campaign also provided the previously published list of alleged “D.C. Madam” calls, one of which was to Vitter that day, although the call didn’t come during the vote.

In 2007 Vitter confessed to a “serious sin” after the “D.C. Madam” scandal broke, but he has never provided details about the serious sin.

For its part, Vitter’s campaign blasted Edwards for sending the race into the “gutter.”

“John Bel Edwards is resorting to gutter personal attacks because he does not want anyone to know his liberal record — raising taxes, supporting Obamacare, opposing oil and gas industry, opposing school choice and on and on,” Vitter spokesman Luke Bolar said.

“David Vitter, a Louisiana conservative, is completely focused on leading and building a brighter future for Louisiana and he’s done more to help veterans in Louisiana than anyone.” 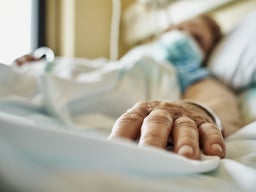 Man had the heaviest kidneys in the world removed in a...