16 details you probably missed on Netflix's 'Dash and Lily' NetflixLily wears a lot of funky hair accessories throughout the series.

“Dash and Lily,” based on the 2010 book “Dash and Lily’s Book of Dares” by Rachel Cohn and David Levithan, is a Netflix original series that follows two Manhattan teenagers as they meet and grow closer by exchanging messages in a notebook throughout the holiday season.

Both fans of the book and those who haven’t read it yet can enjoy this delightful series full of festivities and budding romance.

Read on for some fun details you may have missed on “Dash and Lily.”

The Strand logo features a real fun fact about the bookstore. 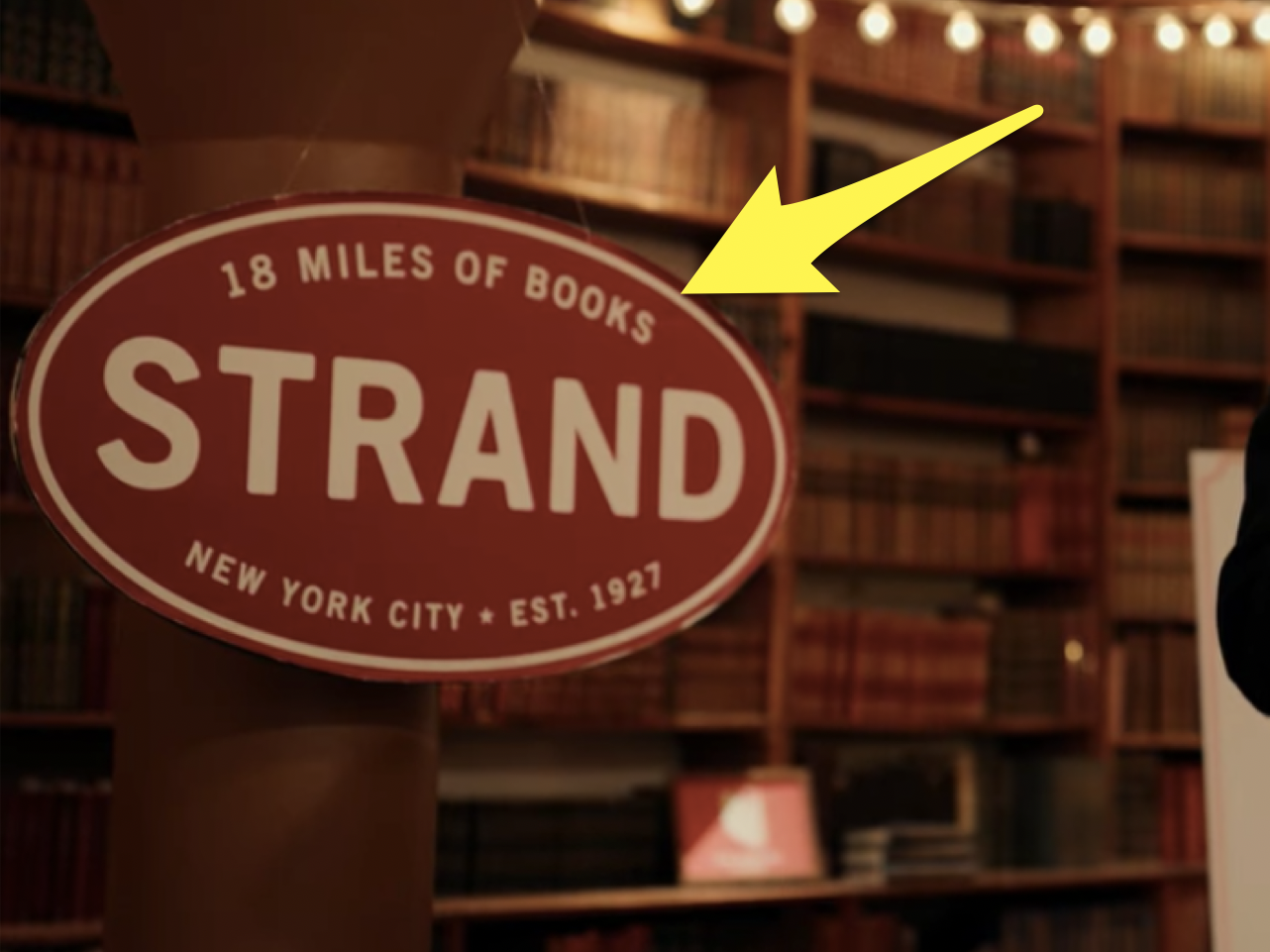 NetflixThe fact is discussed in the book the show is based on.

The bookstore where Dash originally finds Lily’s notebook, and where the two eventually share their first kiss, is a huge part of both the book and the series.

In the book, Dash comments on The Strand selling more than “18 miles of books.” And when he’s there on the series, the bookstore’s logo with the catchphrase can be seen behind him.

The show actually filmed on-site at the famous New York bookstore, and “18 miles of books” is part of The Strand’s real-life logo.

Several different posters for the animated film “Collation” appear throughout the movie. 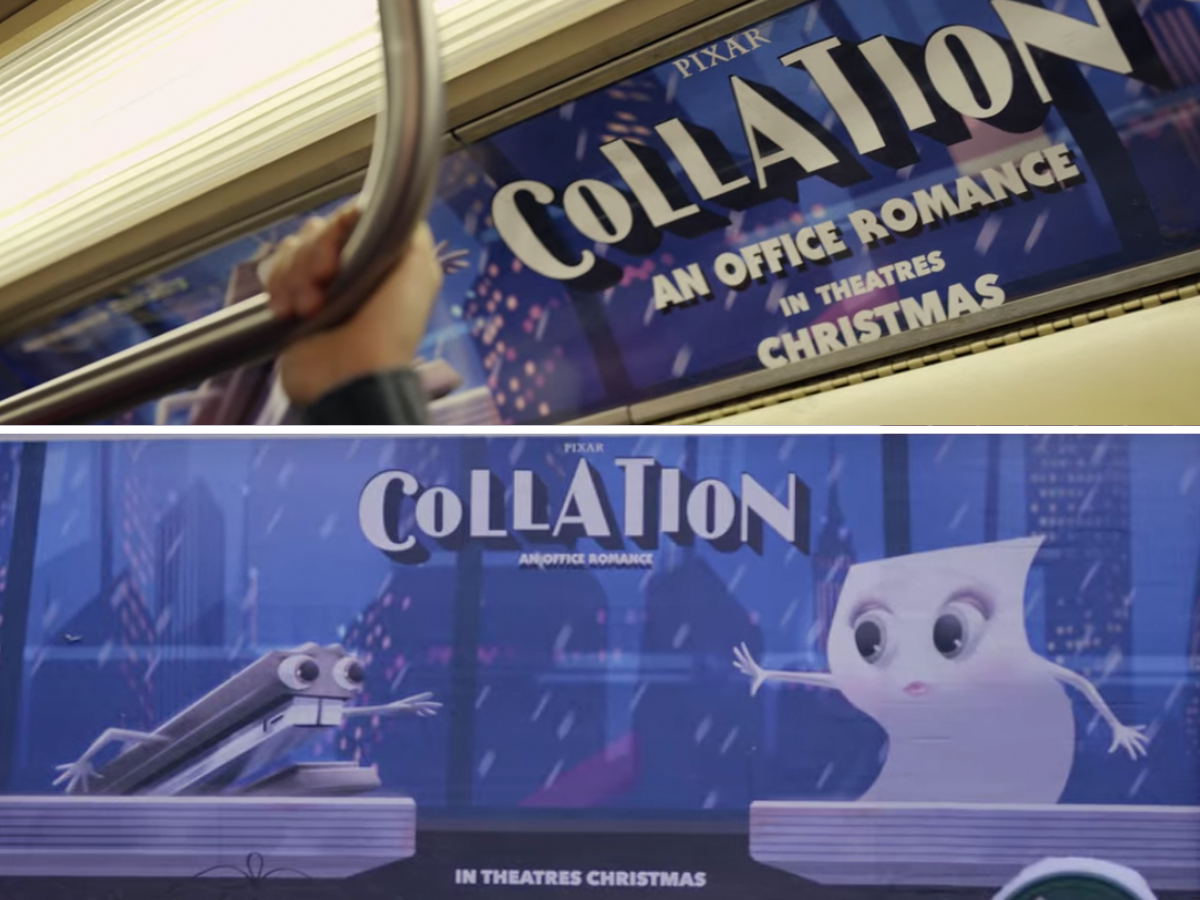 Dash and Lily both walk by multiple posters for the faux Pixar movie “Collation.”

The flick was mentioned in detail in the book, where it was described as an animated “office romance” about a stapler and piece of paper that fall in love.

The movie was made up for the book and show, but the informative and realistic posters in the background of scenes throughout the series make it feel real. “Dash and Lily” characters even talk about which real celebrities voice the leads in the fictional film. 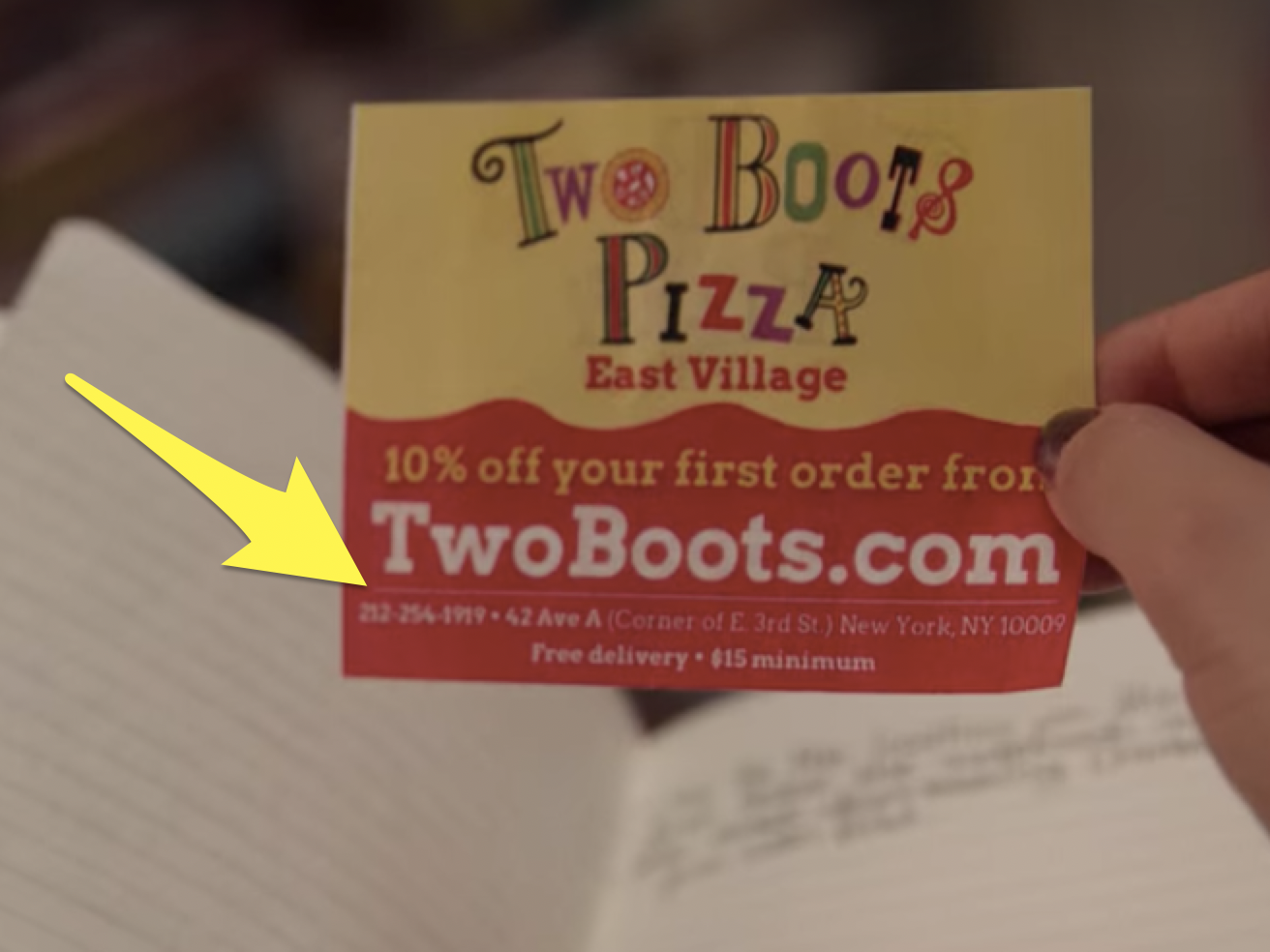 New Yorkers watching the show probably immediately recognised Two Boots, a pizzeria that started in Manhattan but now exists in a few other places as well.

The card that Dash leaves in the notebook for Lily features the pizzeria’s phone number, address, and website, all of which are accurate for the actual Two Boots location in East Village.

The East Village pizzeria, where the show filmed, has a bright and unique exterior that’s recognisable for people who have visited before. And for those who haven’t, they can appreciate the fun background it makes for the scenes between Lily and Boomer.

After visiting an “Alice in Wonderland” statue, Lily has a nightmare with a Wonderland theme. 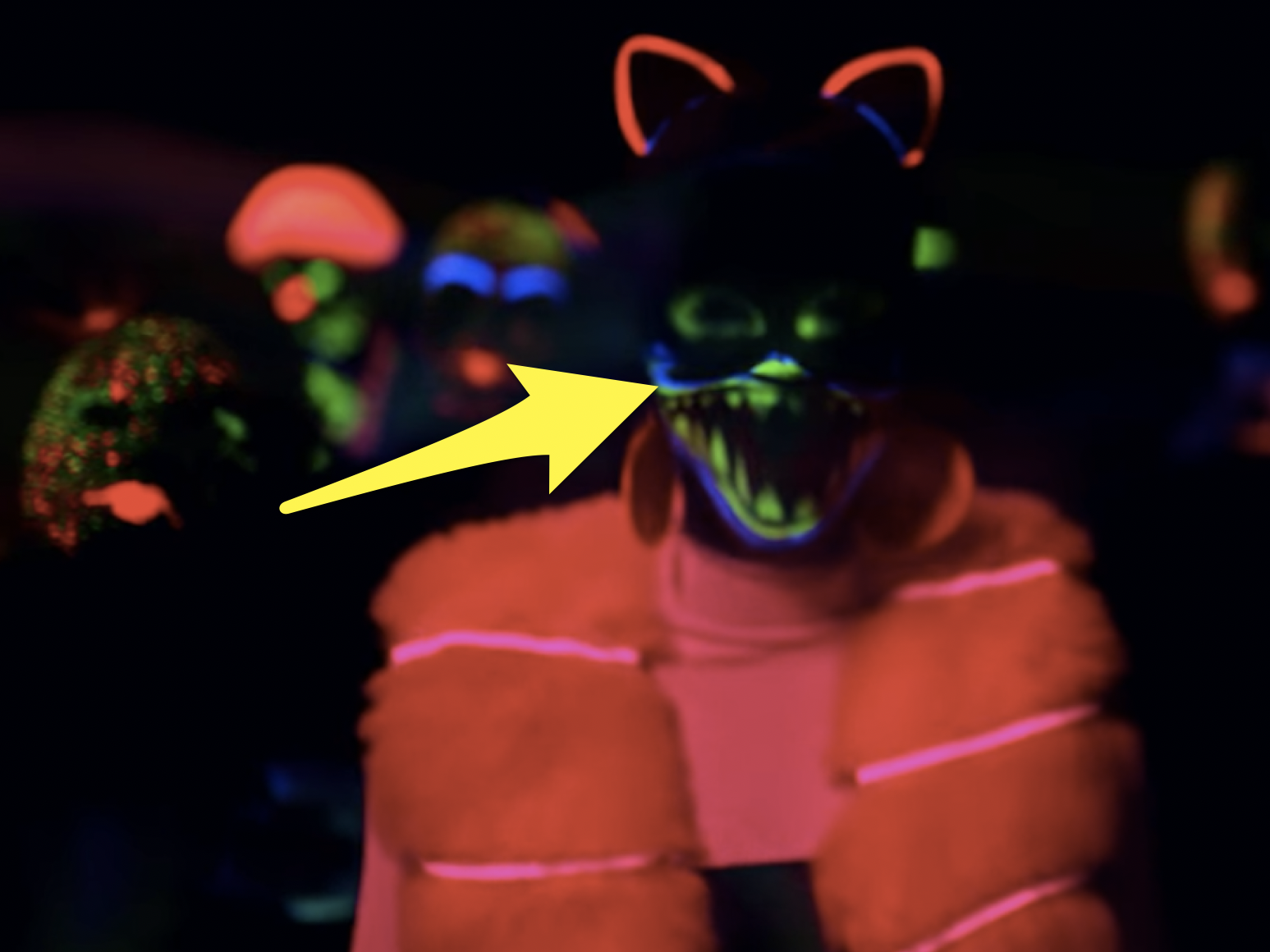 On the show, Dash and Lily’s notebook drops take the characters to plenty of famous New York landmarks, including the “Alice in Wonderland” sculpture in Central Park.

After Lily picks up the notebook from the sculpture, she has a nightmare about the party Dash dares her to go to.

Her nightmare shows partygoers wearing neon clothing and makeup in a black-light-lit room, and one guest seems to have their face painted like the Cheshire Cat.

A cover of the song “White Rabbit,” which includes lyrics based on “Alice in Wonderland,” is also playing in the background.

The Macy’s elf and the “Door Queen” at the Challah Back Boys concert are played by the same actor. 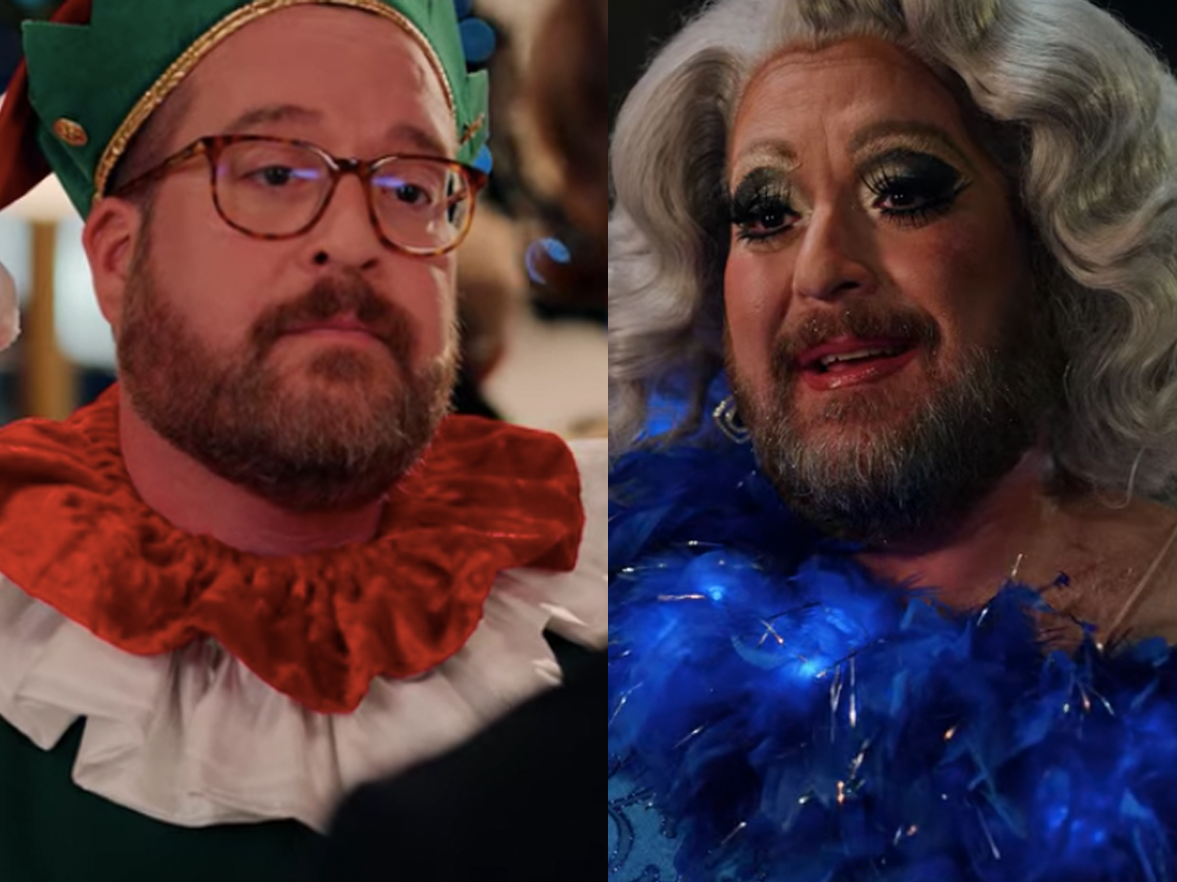 NetflixMichael Cyril Creighton played more than one role on ‘Dash and Lily.’

When Dash gets in line to meet Santa at Macy’s as part of a dare, an elf tries to stop him.

Viewers who are paying close attention may realise that the same actor who played that elf, Michael Cyril Creighton, appeared on another episode of the show as well.

Creighton was also the “Door Queen” who let Lily into the party where the Challah Back Boys are performing on the episode “Hanukkah.”

Miss Menorah has been on other shows before, including “RuPaul’s Drag Race.” 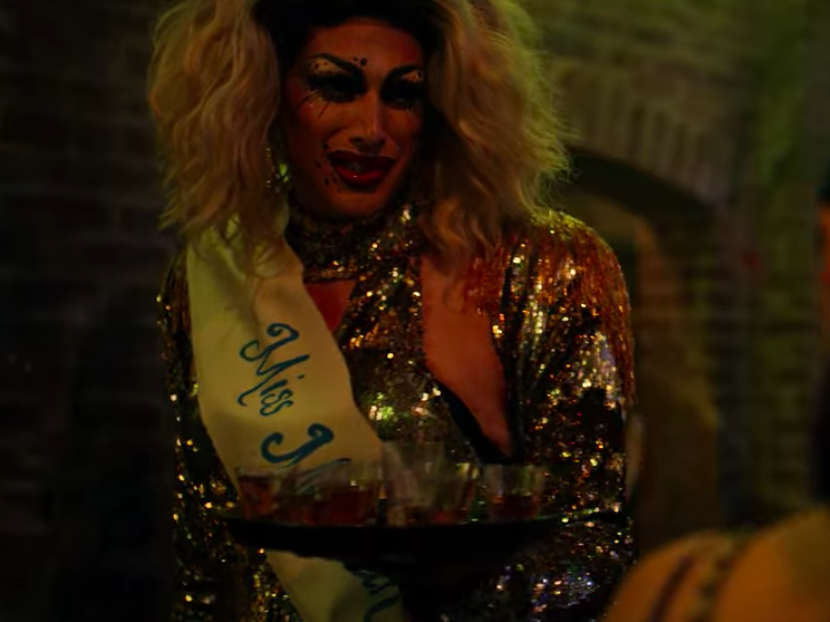 When Lily first enters the Hanukkah party, she bumps into a drag queen wearing a crown and sash labelling her Miss Menorah.

Later, the Door Queen steals Miss Menorah’s crown to give it to Lily. 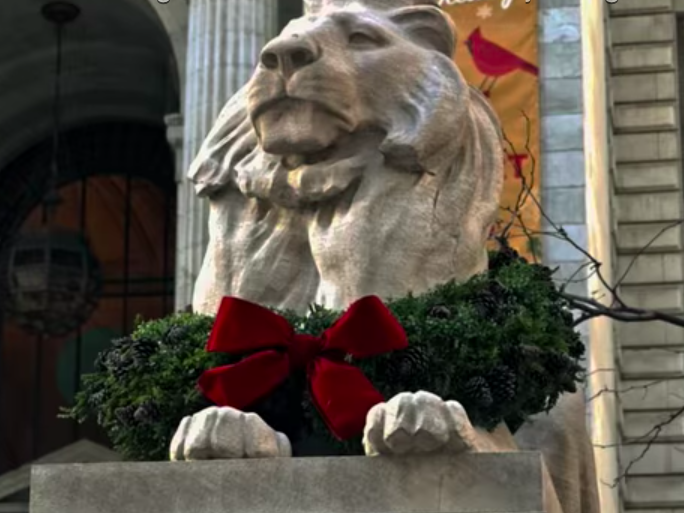 Each episode features plenty of shots of the city looking festive, including a lion statue wearing a wreath.

This appears to be one of the two marble lions that sit outside the New York Public Library’s 42nd Street location.

The NYPL usually decorates the iconic lions at different times of the year. Most recently, they have been donning face masks. 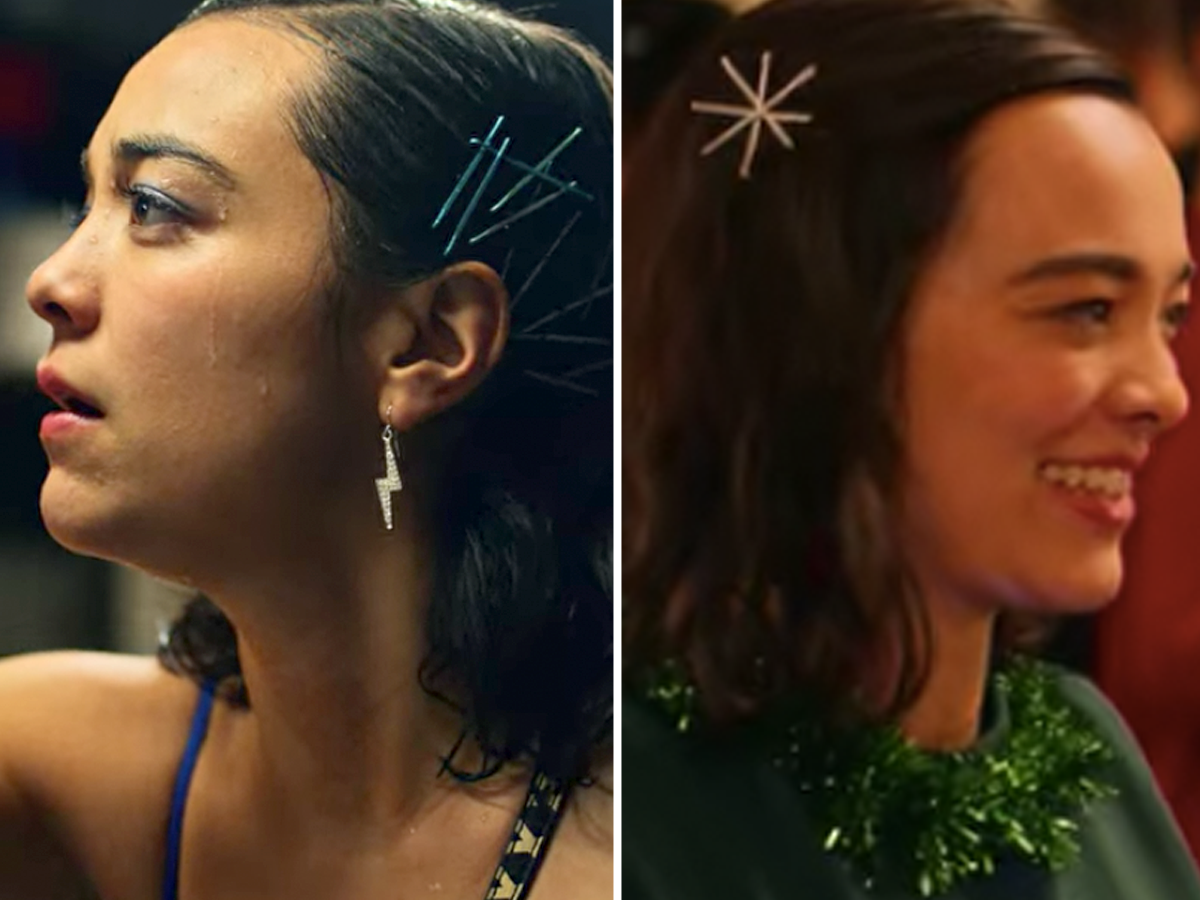 NetflixMidori Francis as Lily on ‘Dash and Lily.’

Lily has a unique sense of style throughout the series, including her elaborate hairpins.

Throughout the series, she uses coloured bobby pins to create different patterns and shapes in her hair.

For example, during the “Hanukkah” episode, Lily wears bright-blue pins in her hair to go with her blue dress. And on “Christmas Eve,” her look features white bobby pins in the shape of a snowflake to complement her Christmas-tree sweater.

The notebook cover goes from flour-covered to perfectly clean in the span of a scene. NetflixAustin Abrams and Midori Francis starred on ‘Dash and Lily.’

When Dash makes mochi on one of the dares, he ends up covering the red notebook in flour, but when Lily has it back in the next scene, it looks totally clean.

The obvious explanation is that Dash took the time to clean the notebook before passing it off to Lily, but it still looks a little too pristine considering all the wear and tear its been through.

Both Lily’s puppet of Dash and the real Dash wear blue coats. 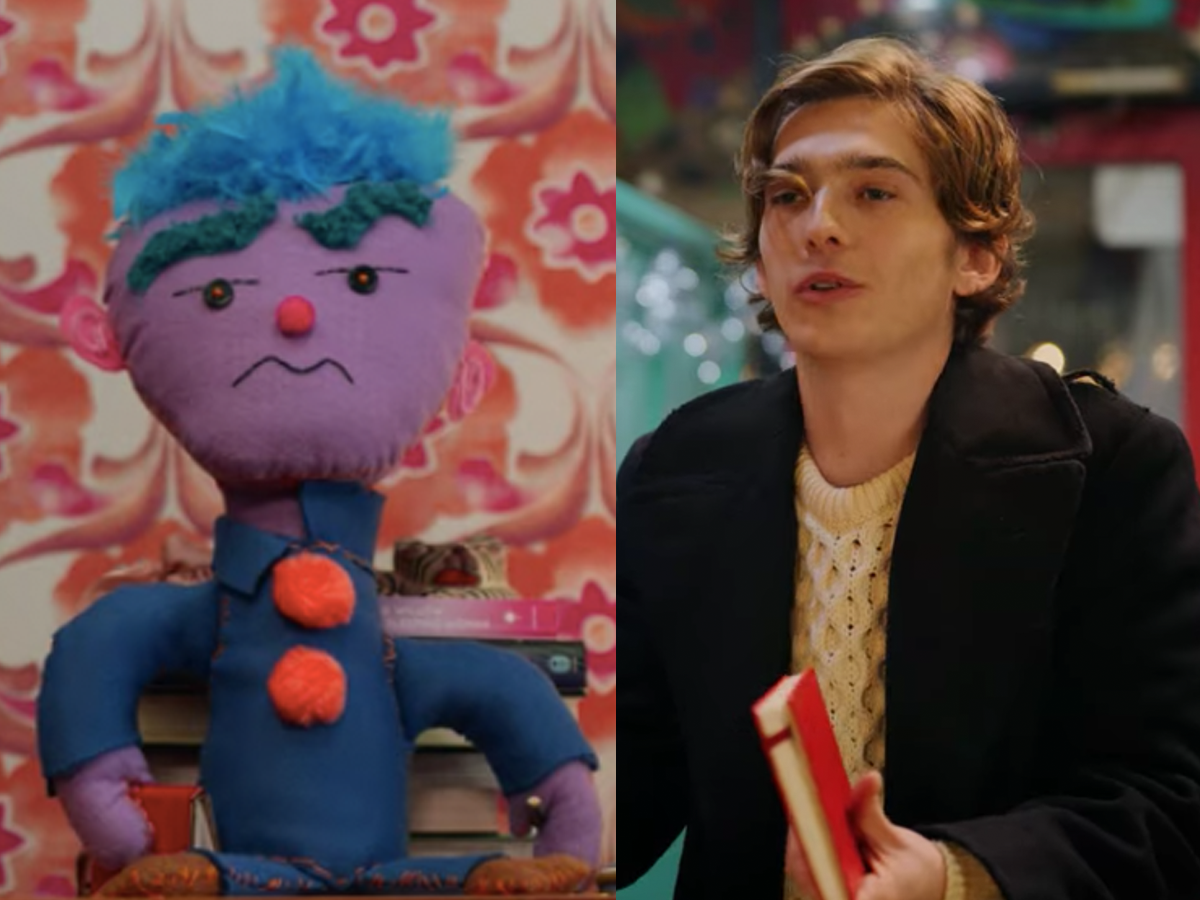 NetflixLily dressed her puppet in the right colour.

Dash wears a dark-blue peacoat throughout most of the series – until he goes shopping with his ex-girlfriend Sofia, who makes him throw it out because of the rip near the collar.

When Lily makes a puppet version of what she thinks Dash looks like, she takes a lucky guess and dresses him in a blue coat with a jaunty collar, even though she’s never seen him or his blue peacoat before.

Edgar is still wearing the bracelet Lily gave him in middle school even though we saw him discard it. NetflixGlenn McCuen on ‘Dash and Lily.’

In a flashback sequence, Lily makes friendship bracelets for her middle-school classmates at a school dance. But the other students make fun of her and throw them on the floor, and Edgar calls her weird.

When Lily runs into Edgar at the Challah Back Boys show, he again calls her weird, but in a much different context. He makes it clear that he likes Lily, and when he runs into her on her dog-walking route, he shows her that he’s still wearing the handmade friendship bracelet she gave him.

However, in the flashback, we saw him throw it on the ground and walk away. It’s also unlikely – even if he did go back to pick it up – that a handcrafted bracelet like that would still be wearable all these years later.

The “mummy app” Boomer downloads is a nod to the show’s source material. 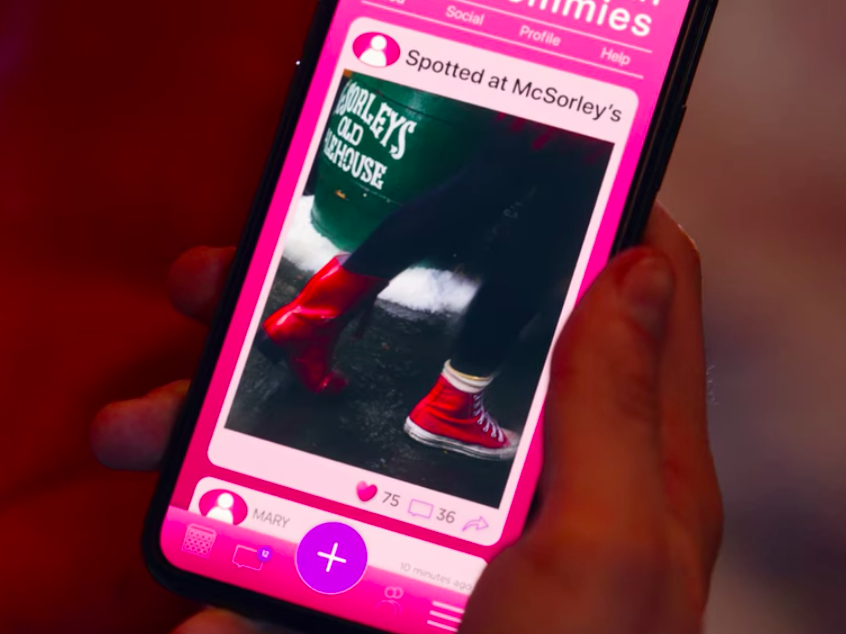 On the episode “Cinderella,” Boomer downloads the app Manhattan Mommies onto Dash’s phone to help him track down Lily after she left him with nothing but a red boot.

It ends up being extremely helpful as Dash is only able to find Lily on Christmas Day after someone on the app posts a photo of her wearing the other red boot. But in the book, a similar mummy blog gets Dash into a lot of trouble.

The show significantly cut that plotline, but the inclusion of a similar site is a fun detail for those who read the book.

At one point, Lily casually sits on her hot-glue gun. 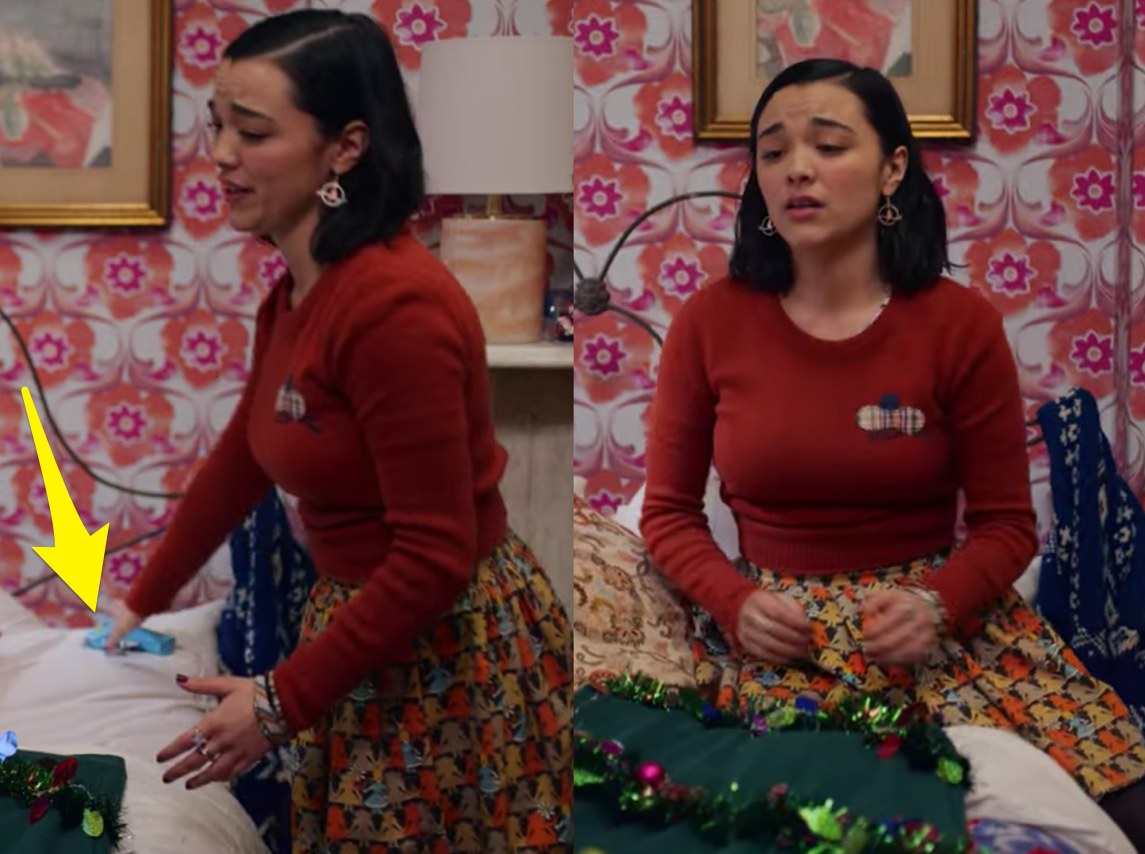 On the episode “Christmas Eve,” Lily is seen using a hot-glue gun to create her iconic tree sweater.

While talking to Langston, she puts the tool down on her pillow and then sits on it. Considering she was just using it to glue things, the gun would have been quite hot – but she remains unphased. Throughout the show, friends and family members help Lily and Dash set up their dares and notebook exchanges, including Lily’s Uncle Sal, who works as Santa at Macy’s.

When Lily’s family surprises her on Christmas Day, he can be seen again in the background when she walks in.

The rest of Lily’s family changes into matching pajamas for a group photo, but Uncle Sal is once again dressed as Santa for the picture.

The ornaments on the Christmas tree Dash decorates at The Strand reference several of the dares. 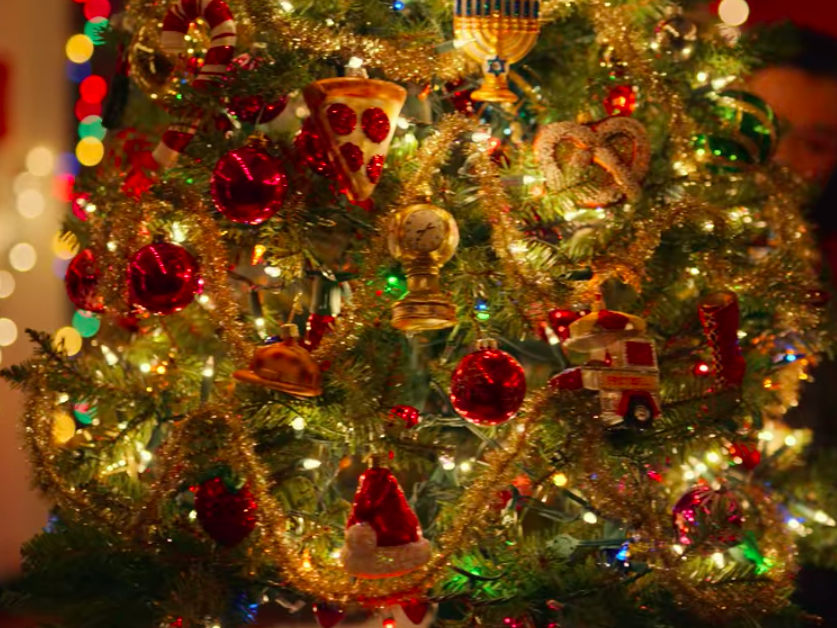 When Lily arrives at The Strand on New Year’s Eve, she finds a Christmas tree that Dash decorated with ornaments referencing several of the dares that they sent each other on.

For example, there’s a slice of pizza for Two Boots, a salt-covered pretzel like the “Lot’s Wife” one Lily ate, a Santa hat like the one Dash stole from Macy’s, a menorah for the Hanukkah party Dash sent Lily to, and a single red boot like the majorette ones Lily wears.

Additionally, the closing scene of the series zooms in on an ornament-version of the notebook, complete with the words “Do You Dare..?” on the cover.

Throughout the series, the snow reflects how Lily and Dash’s relationship is going. 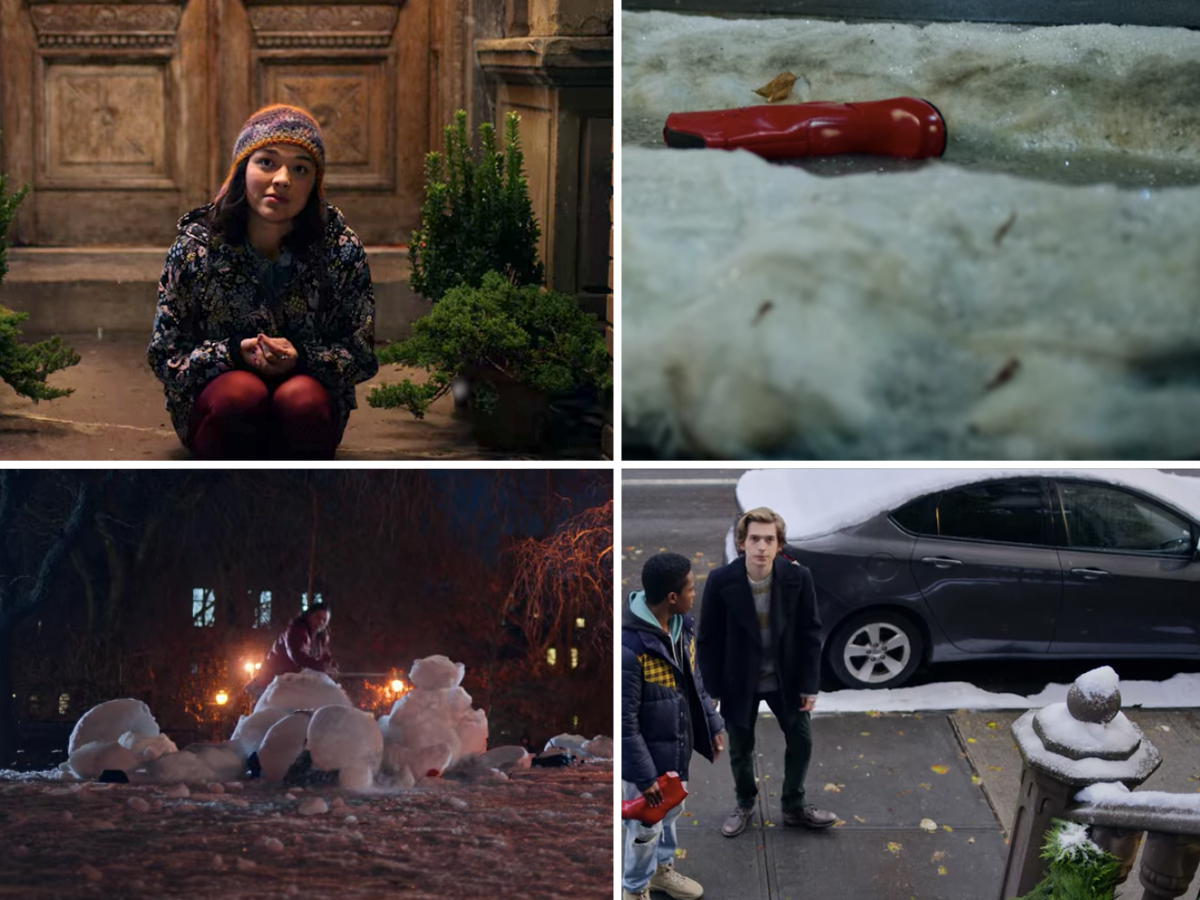 NetflixThe snow tells its own story throughout the series.

Snow is shown in some form during every episode of the series, and viewers who are paying close attention may realise that there is a “snow story” happening in the background that represents how Dash and Lily’s relationship is going.

During the first two episodes, as they are just starting to meet and develop feelings for each other, the snow falls in cheerful flurries like the butterflies-in-the-stomach feeling of a crush.

When Lily runs out of the party on “Hanukkah” and doesn’t leave the notebook behind, leaving Dash without a way to communicate with her, the snow is a pile of dirty slush on the ground.

Throughout the other episodes, the snow melts, Lily destroys some snowmen, and finally, a new bunch of snow neatly covers the ground – all mirroring the conflict and eventual fresh start that Dash and Lily go through.