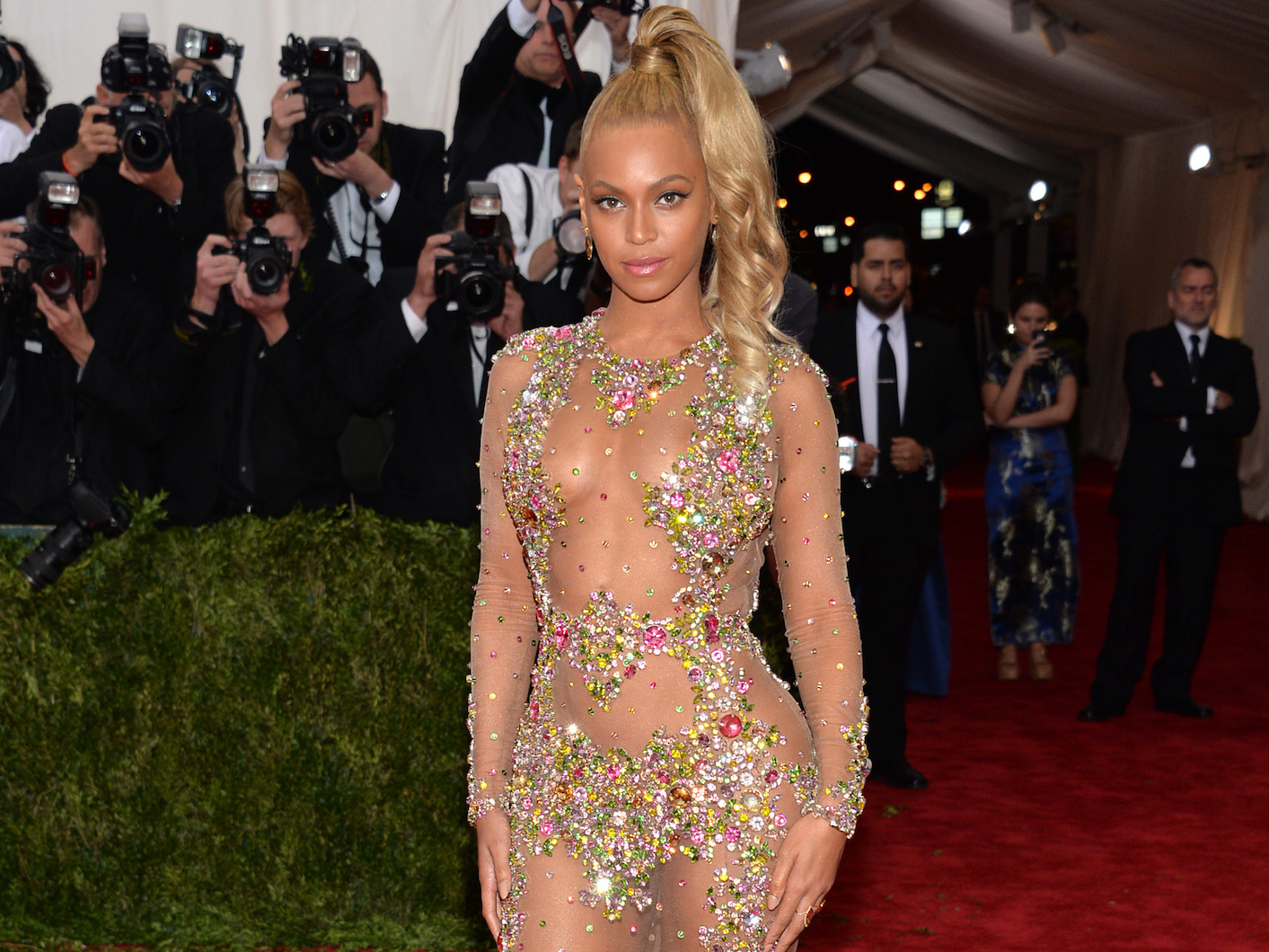 Since 1948, the Met Gala has been hosted annually at the Metropolitan Museum of Art in New York City. The event serves as a fundraiser for the museum, and kicks off the opening of the Costume Institute’s annual fashion exhibit.

To attend, celebrities are expected to wear over-the-top looks that match the theme of the exhibit. And almost always, they deliver. Everyone from Cher to Beyoncé has graced the Met Gala red carpet wearing risqué looks, including gowns with thigh-high slits and “naked” dresses with practically see-through fabric.

While the Met Gala won’t be happening on the first Monday of May this year, due to the coronavirus pandemic, it’s still fun to look back at the most daring outfits from the past.

In 1974, Cher wore a sparkling sheer dress with feathers on the sleeves. 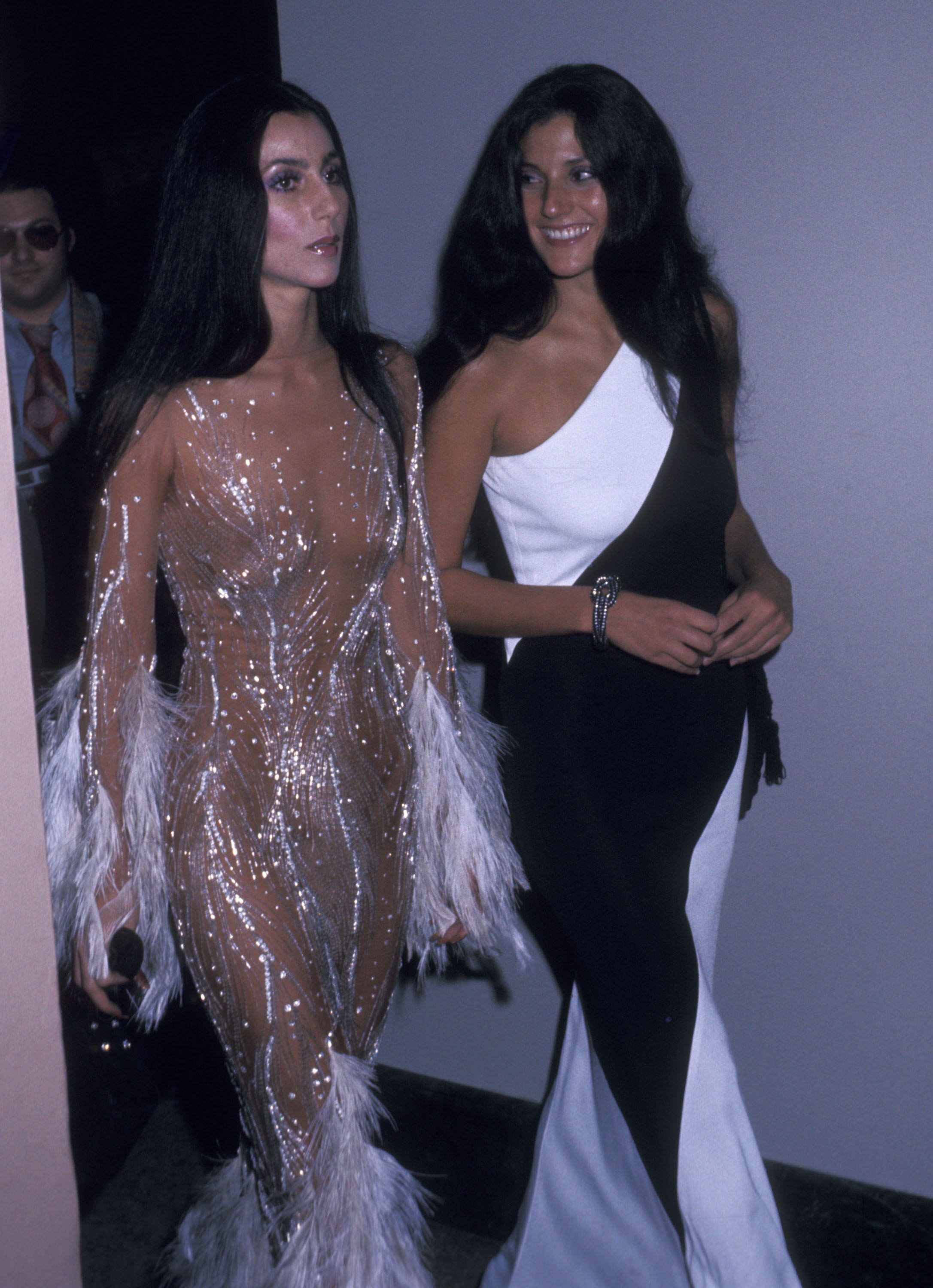 The look became one of the most iconic ensembles worn by Cher throughout her career. The theme of the night was “Romantic and Glamorous Hollywood Design.”

Eleven years later in 1985, Cher turned heads once again with another “naked” style. 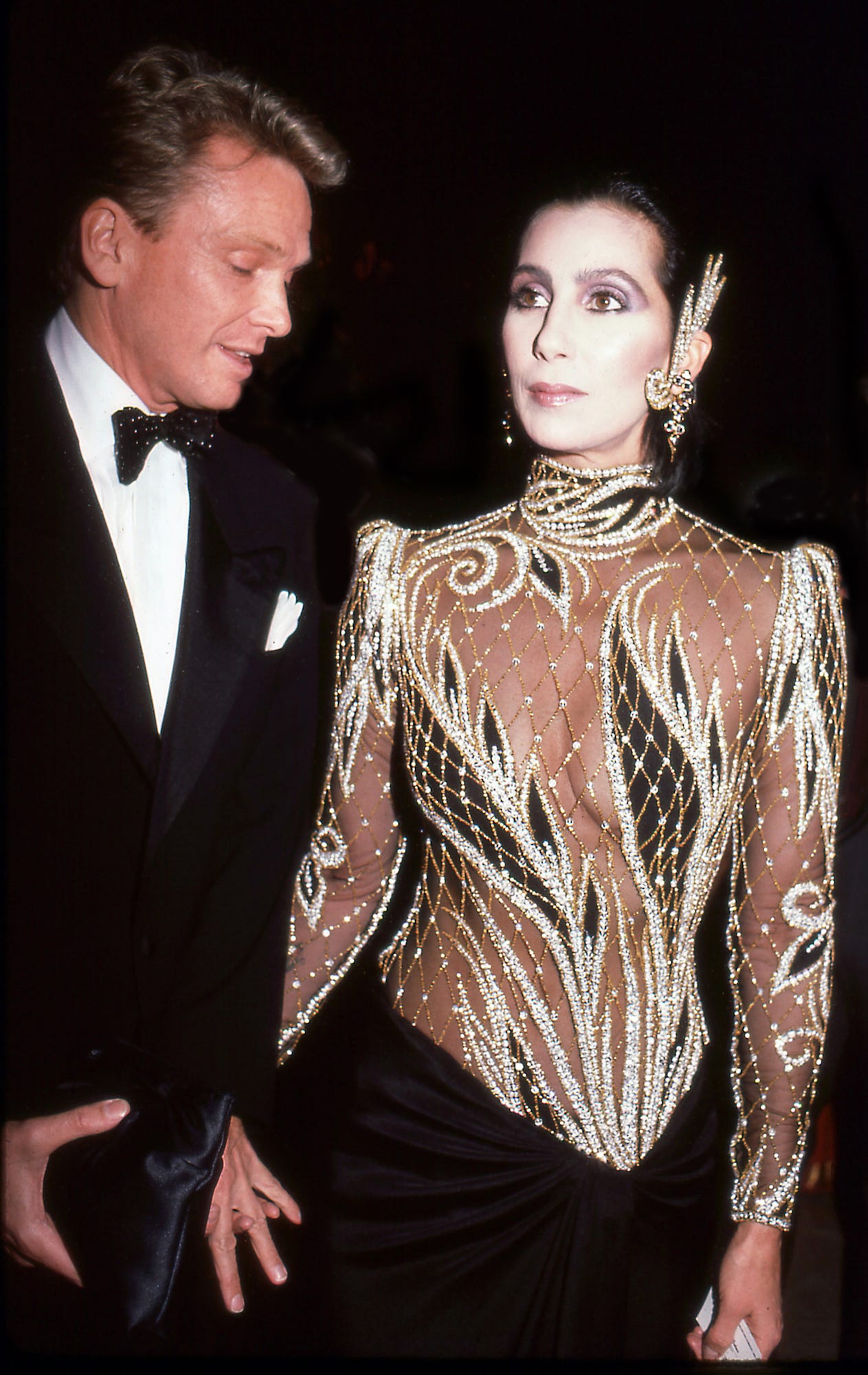 The musician wore a long-sleeved high-neck gown designed by Bob Mackie for the “Costumes of Royal India” event.

It featured a fishnet top with gold and silver detailing, as well as a wrapped black skirt. 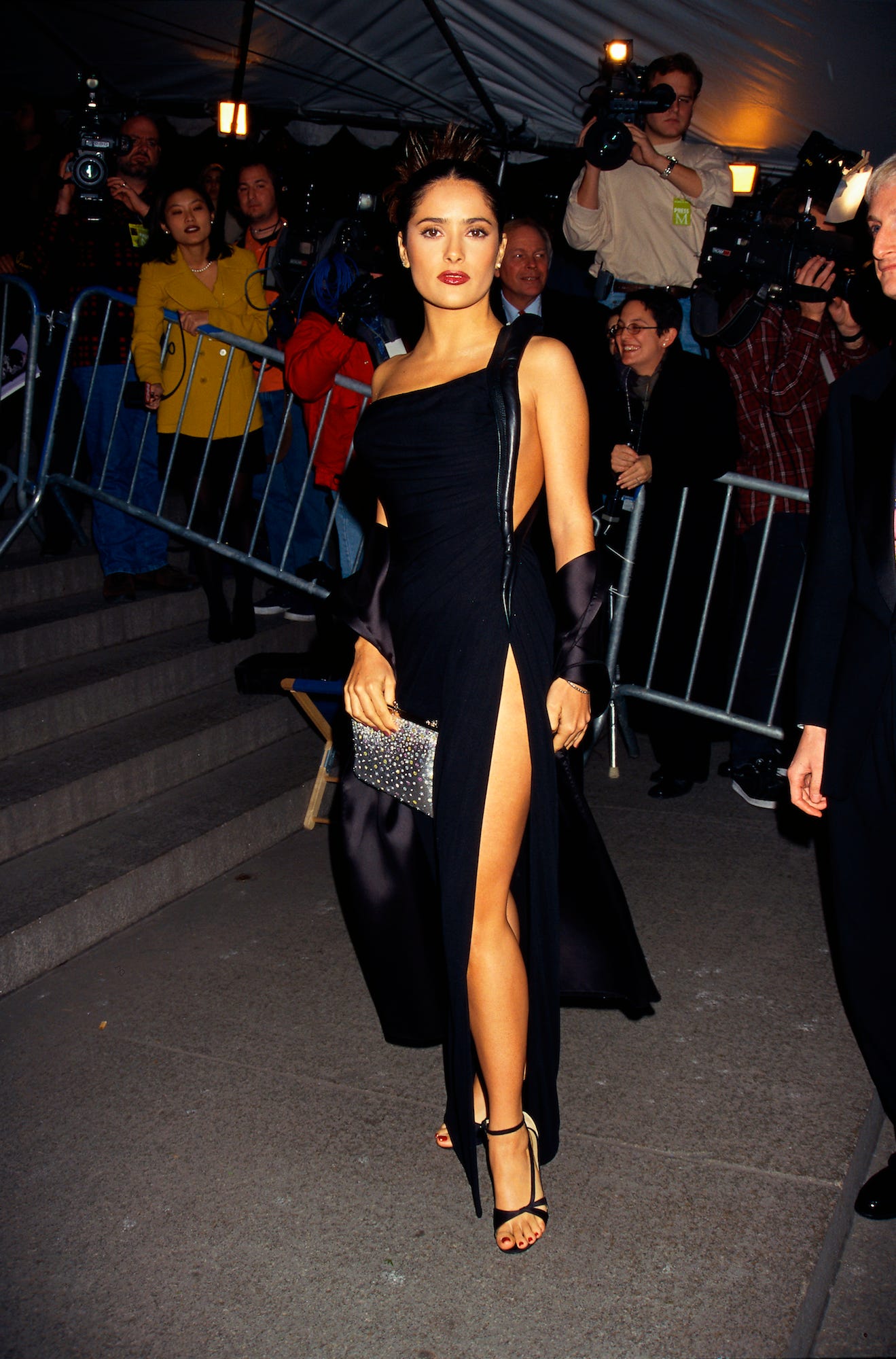 Mitchell Gerber/Getty ImagesSalma Hayek poses at the Met Gala in 1997.

As the event was themed “Gianni Versace,” Hayek fittingly wore a single-strap black gown from the designer. It featured a high slit on its skirt, and a cutout on the side of the bodice.

For “The Model As Muse” Met Gala in 2009, Kate Moss wore a shining silver gown. 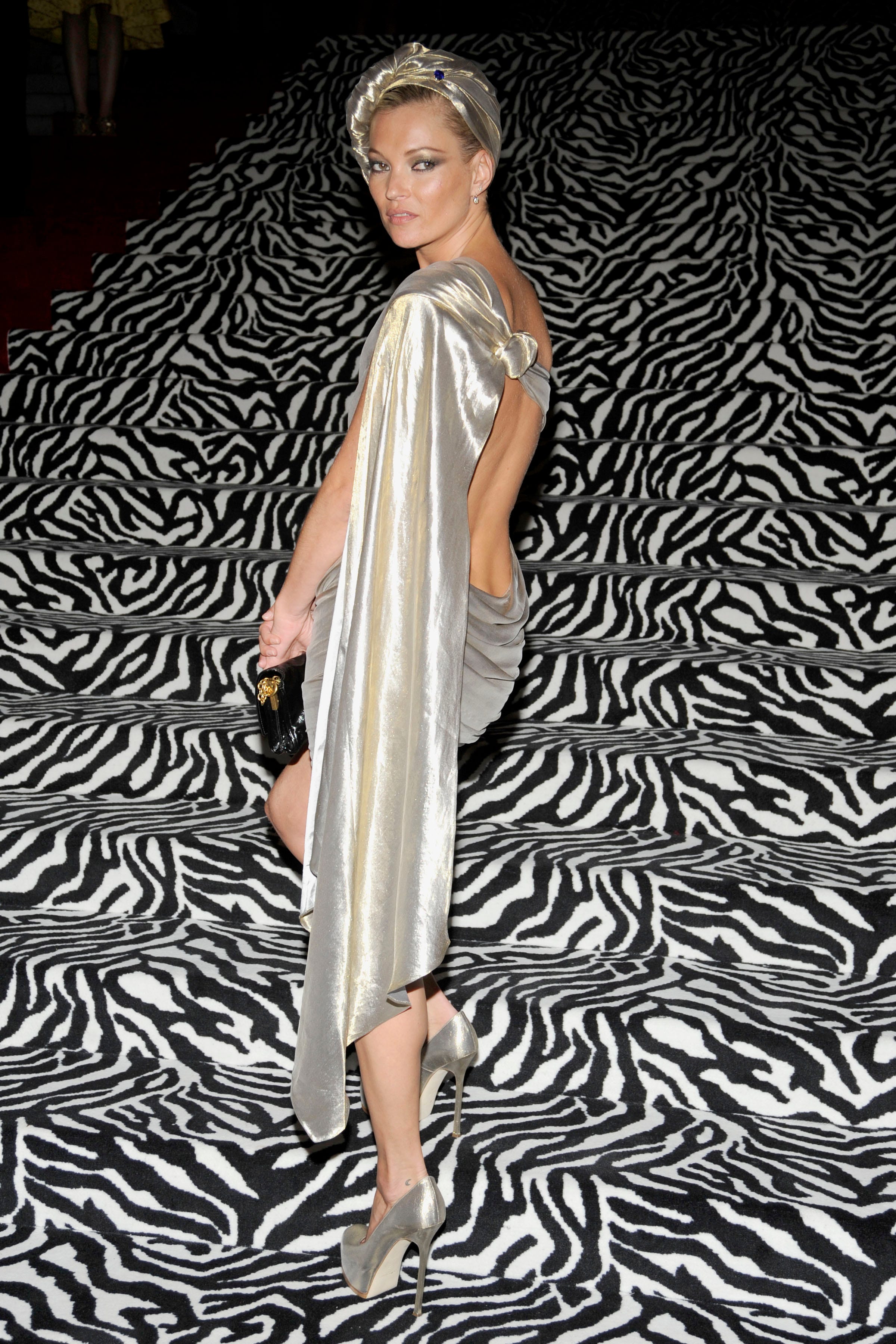 From the front, Moss’ ensemble looked like a simple minidress with a draped piece of fabric over one arm. But from the back, the dress appeared to be much more daring, with a low back and ruched skirt.

In 2011, Rihanna attended her third Met Gala wearing a sheer black gown with a floral print. 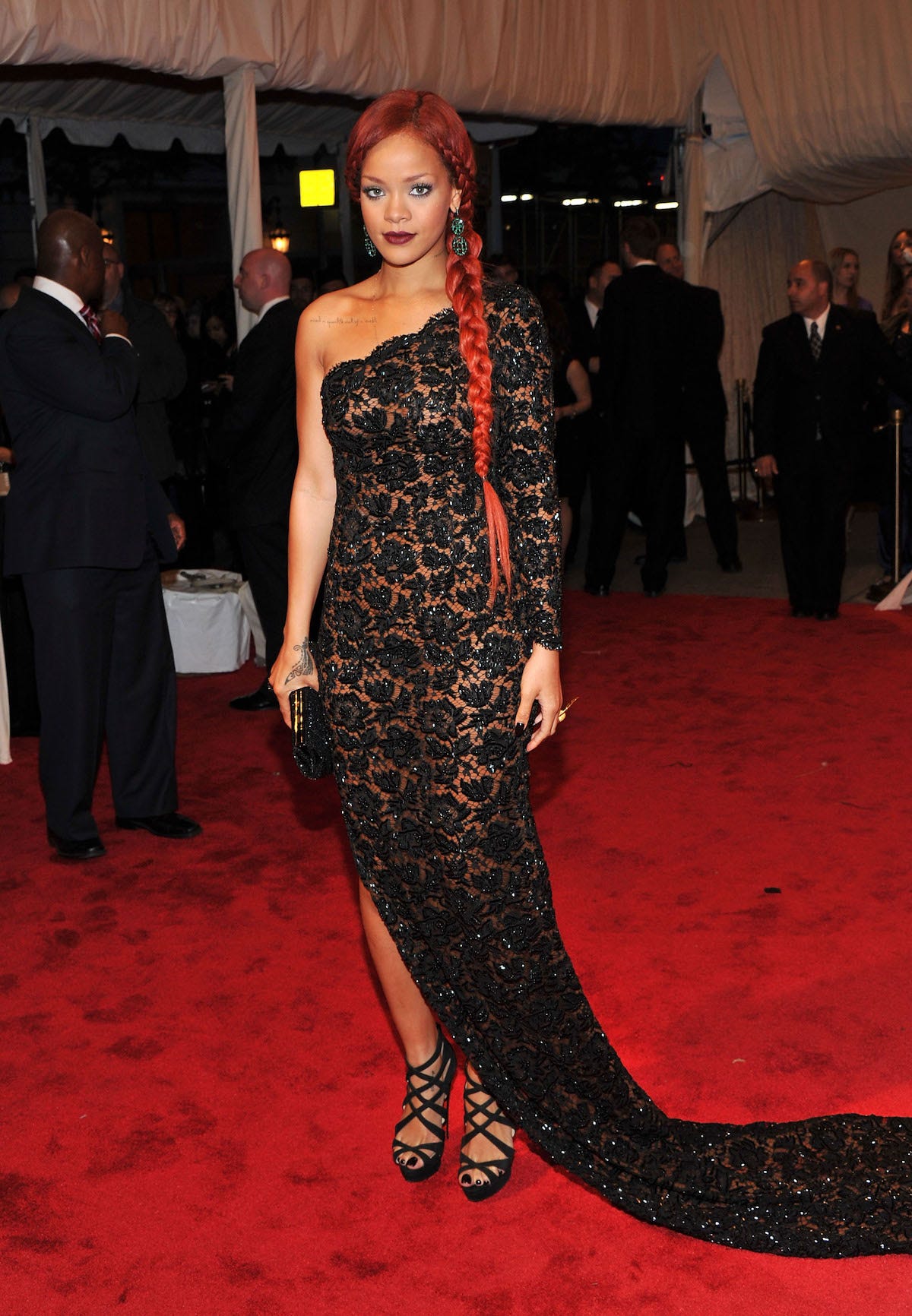 The Stella McCartney dress had a single sleeve, and a long train. Rihanna accessorized the look with strappy heels and dangling earrings, and styled her hair in a long red braid.

Read more: Rihanna is the undisputed queen of Met Gala fashion – here are all her jaw-dropping looks 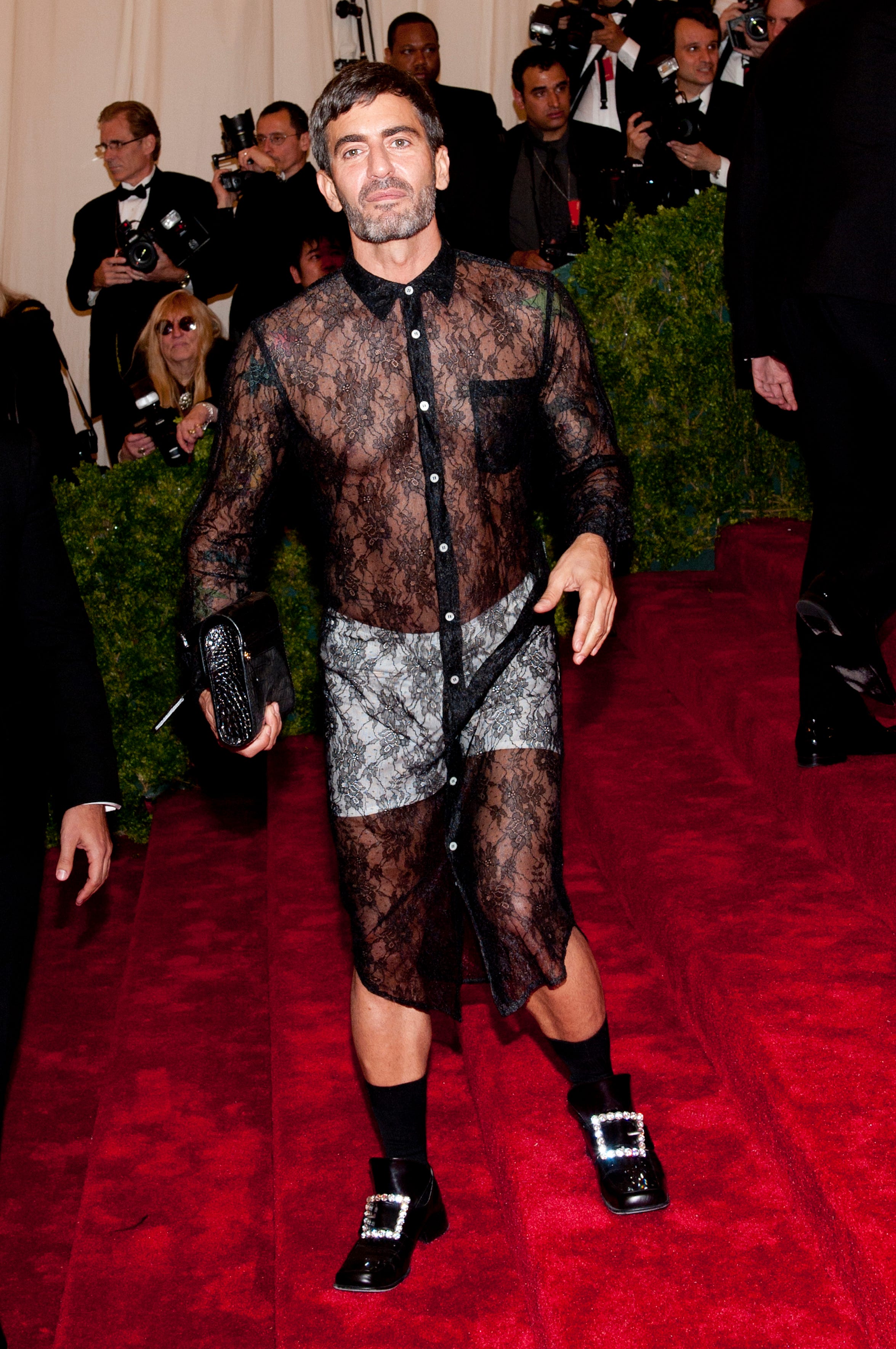 For the “Schiaparelli and Prada: Impossible Conversations” event, the fashion designer donned a black-lace dress that was styled like a button-up shirt.

He paired the ensemble with white shorts, tall socks, and shoes with diamond belt buckles. 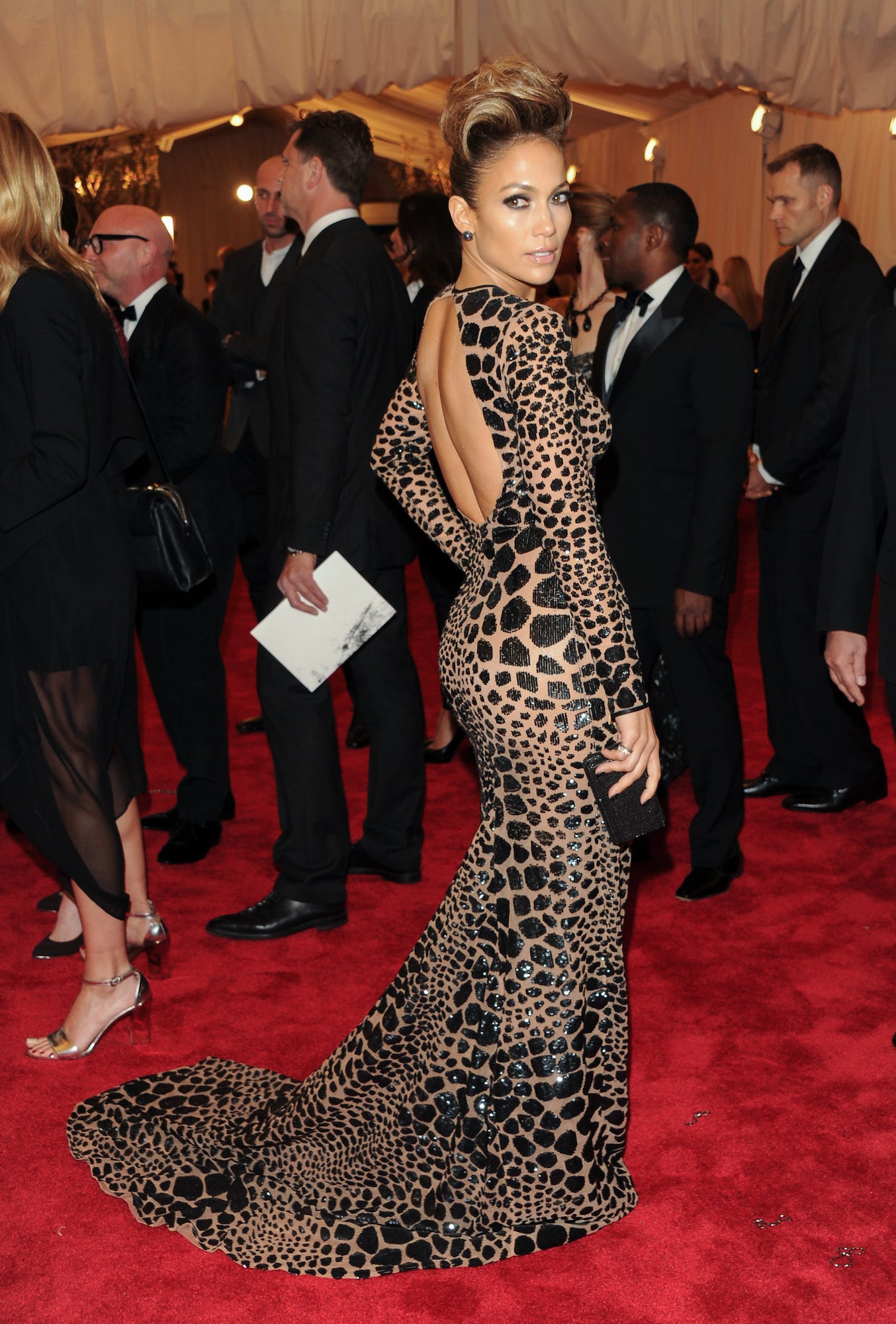 Evan Agostini/Invision/APJennifer Lopez poses at the ‘Punk: Chaos to Couture’ Met Gala in 2013.

Her slim-fitting dress was made from sheer fabric, and had a circular cutout on the back. Lopez wore the ensemble to the “Punk: Chaos to Couture” Met Gala.

Also at the 2013 “Punk: Chaos to Couture” event, Anne Hathaway put her own twist on the sheer-dress trend. 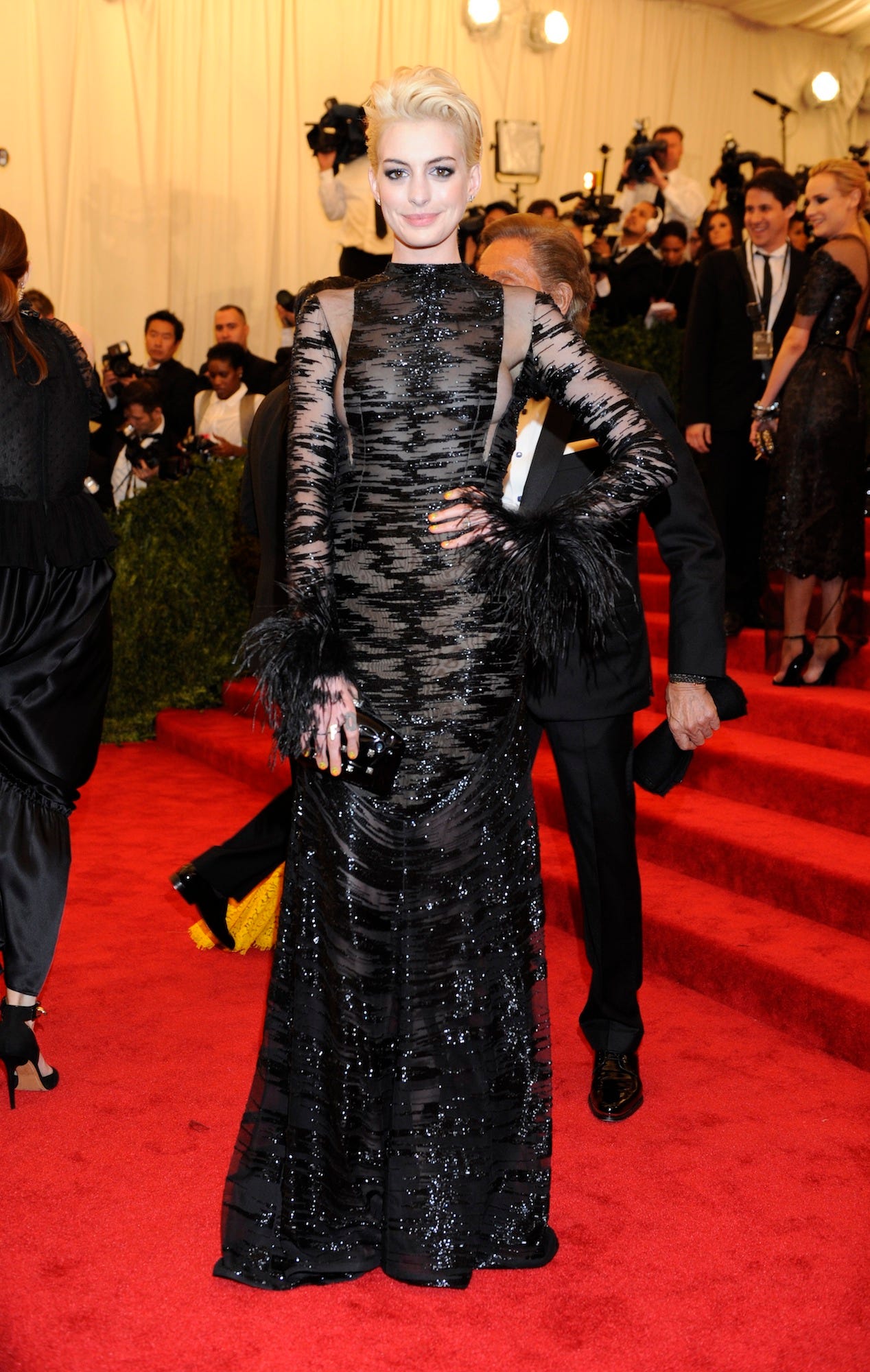 Hathaway’s dress was see-through, and featured two triangle-shaped cutouts on the sides of the bodice. The gown also included a striped print, long sleeves, and feathered embellishments.

In 2014, Chrissy Teigen arrived wearing a backless gown with a ruffled neckline. 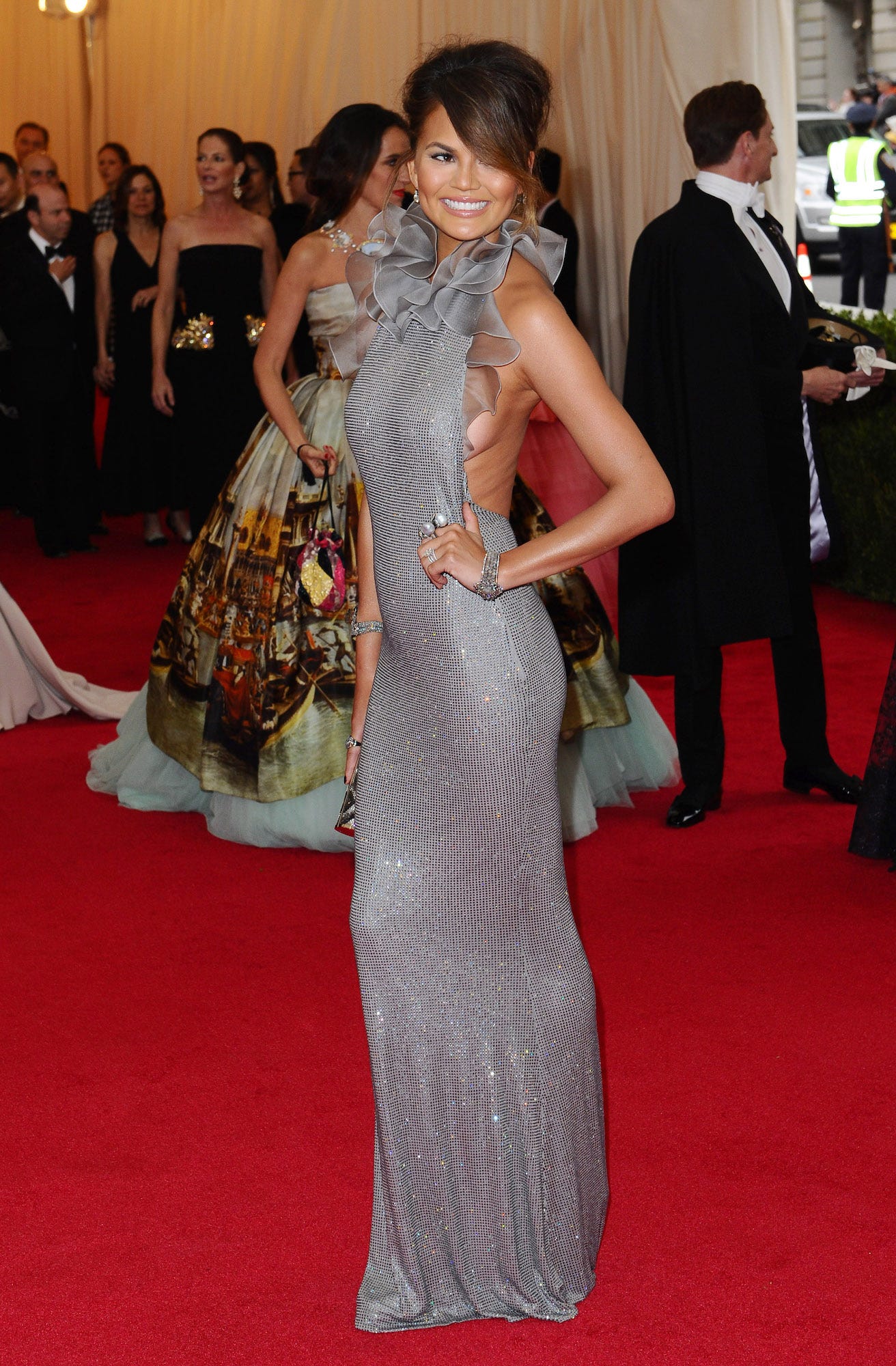 Her skin-baring gown was custom made by Ralph Lauren, and featured tons of Swarovski crystals.

Beyoncé wore one of her most showstopping Met Gala looks in 2015. 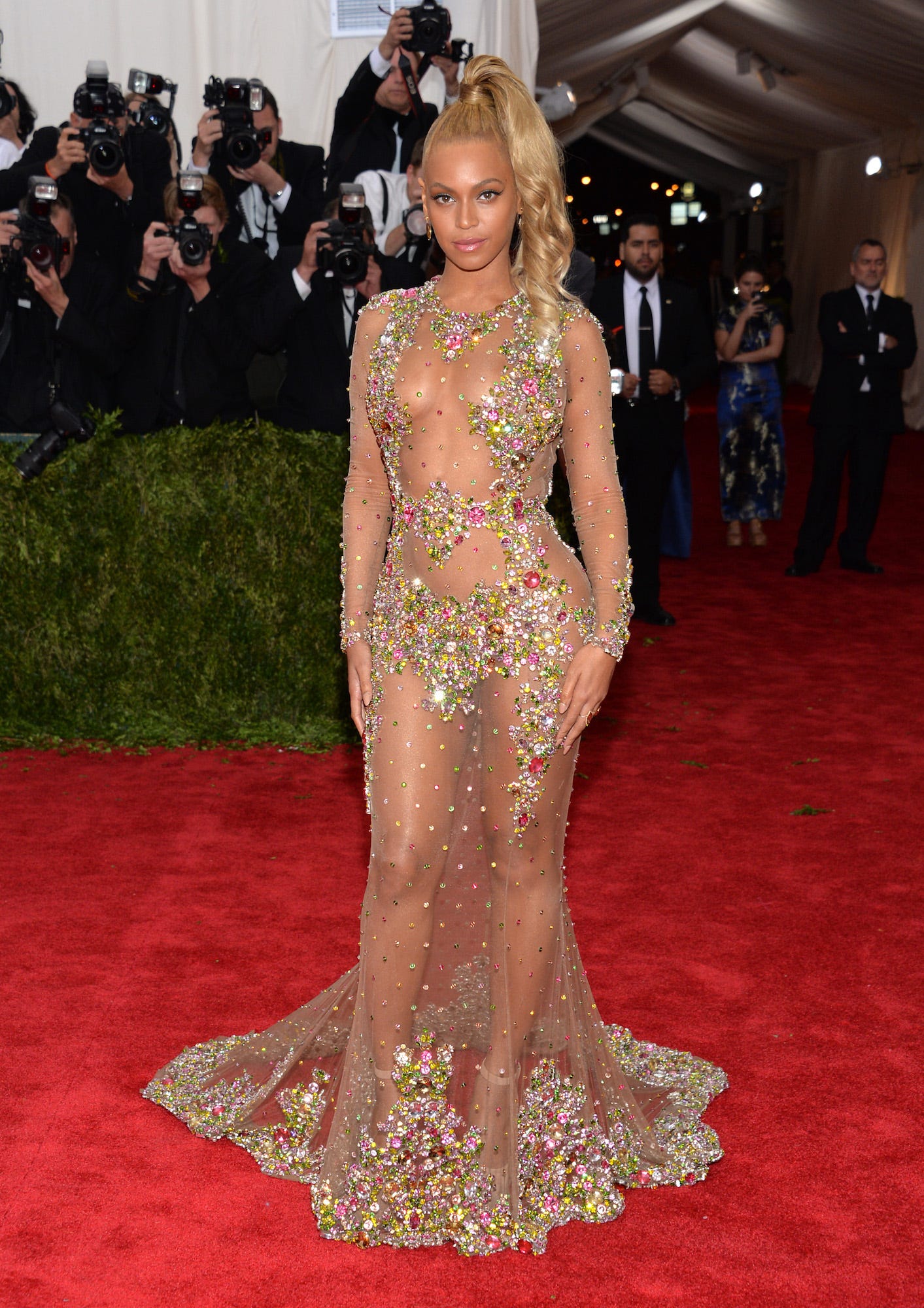 Evan Agostini/Invision/APBeyoncé shows off her sparkling gown at the 2015 Met Gala.

The multi-hyphenate star donned a sheer, long-sleeved “naked” dress, which was embellished in pastel-coloured jewels. She wore the look for the “China: Through the Looking Glass”-themed Met Gala. 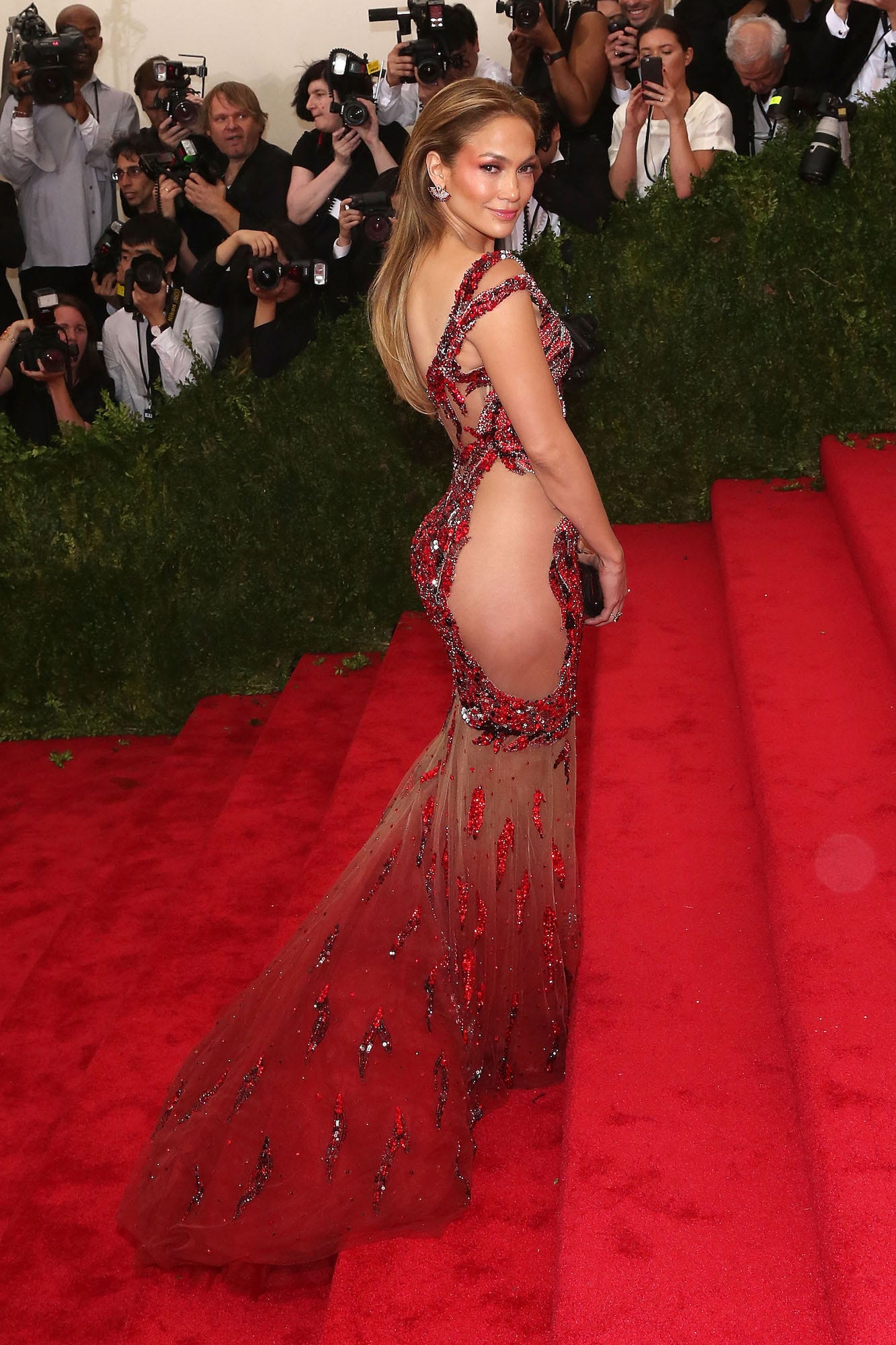 Her gown was designed by Versace, and had a short train that blended into the red carpet.

In 2016, Rita Ora took a daring approach to feathers at the “Manus x Machina: Fashion in an Age of Technology” Met Gala. 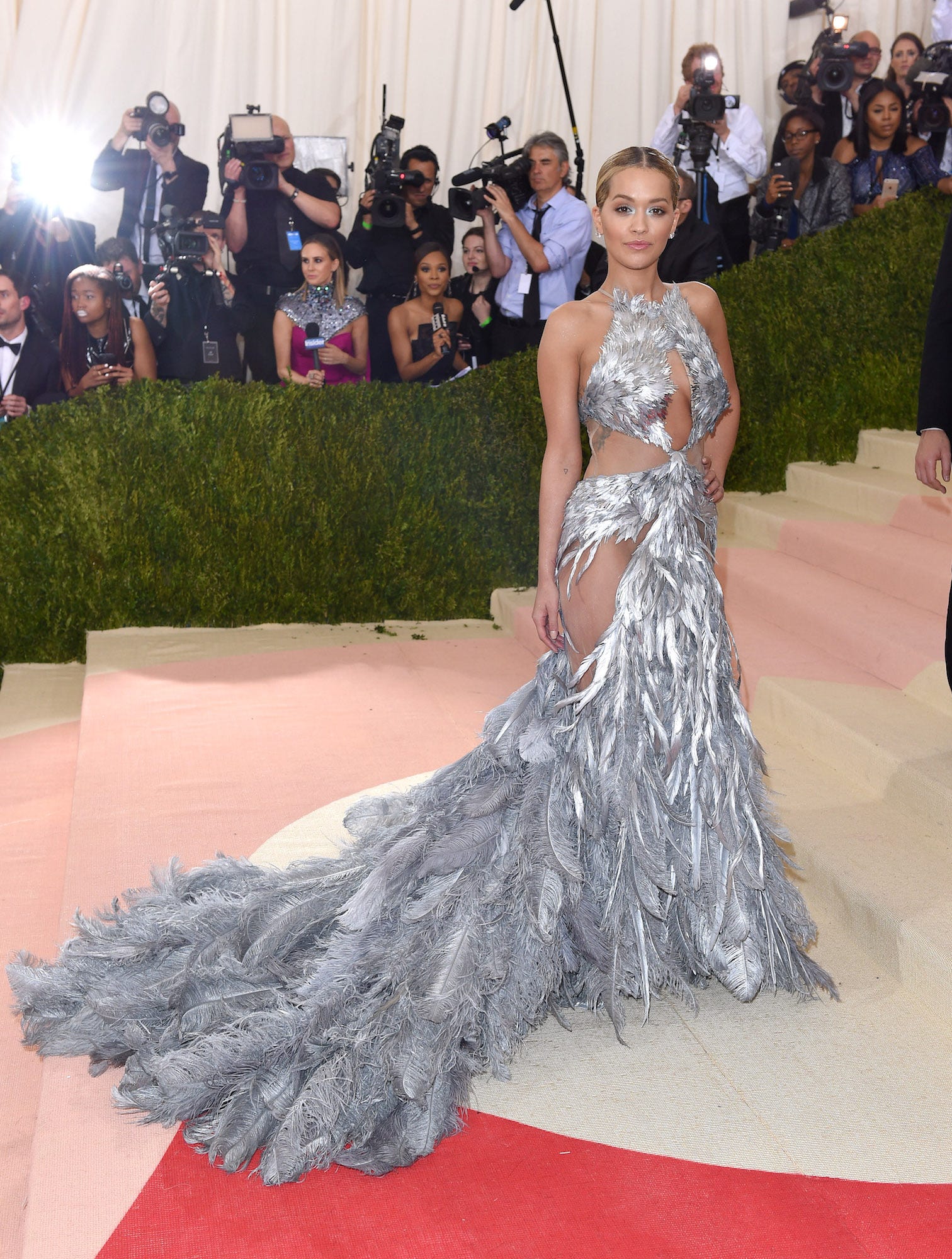 The singer attended the event wearing a silver Vera Wang ensemble, which was created almost entirely out of feathers. It also featured five cutouts near her thighs, waist, and chest.

Nicki Minaj wore a bold dress covered in buckles to the same event. 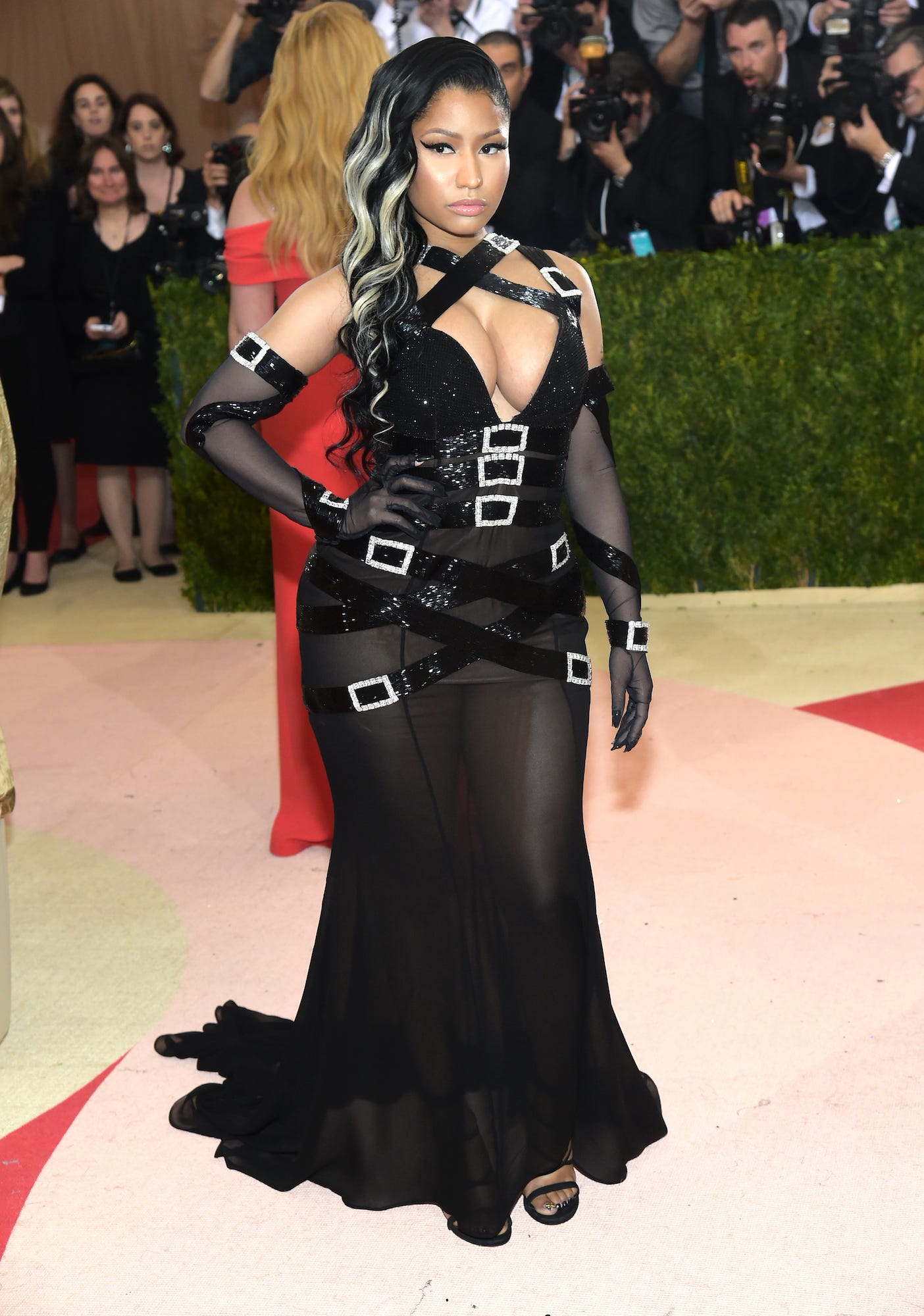 Charles Sykes/Invision/APNicki Minaj showcases her style at the 2016 Met Gala.

Her dress was also sheer, adding an audacious element to her already eye-catching look. Minaj’s gown was designed by Jeremy Scott, who walked the red carpet alongside her.

Emily Ratajkowski opted for a low-back gown in 2016. 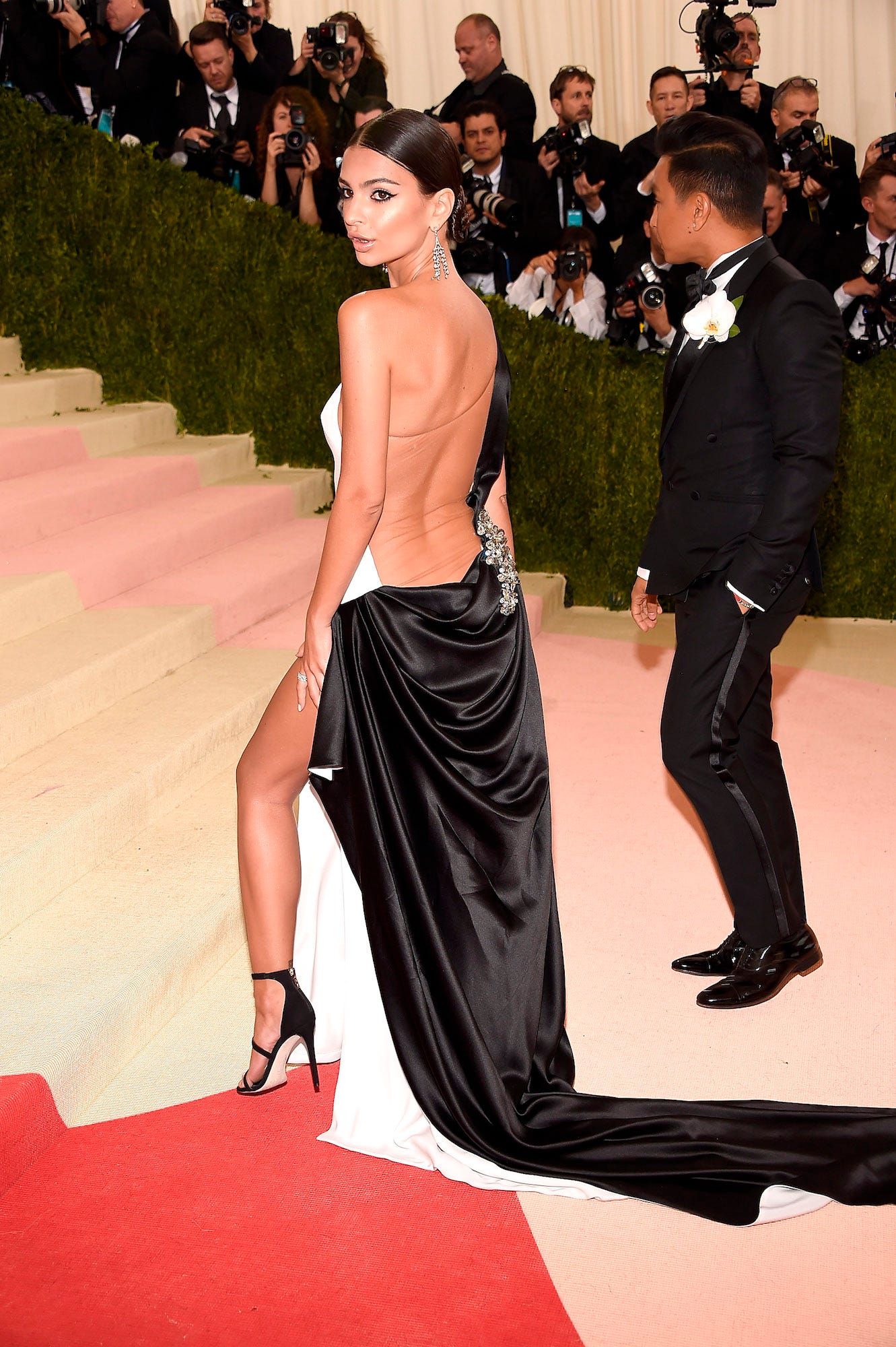 The black-and-white ensemble was designed by Prabal Gurung, and perfectly matched the “Manus x Machina: Fashion in an Age of Technology” theme. 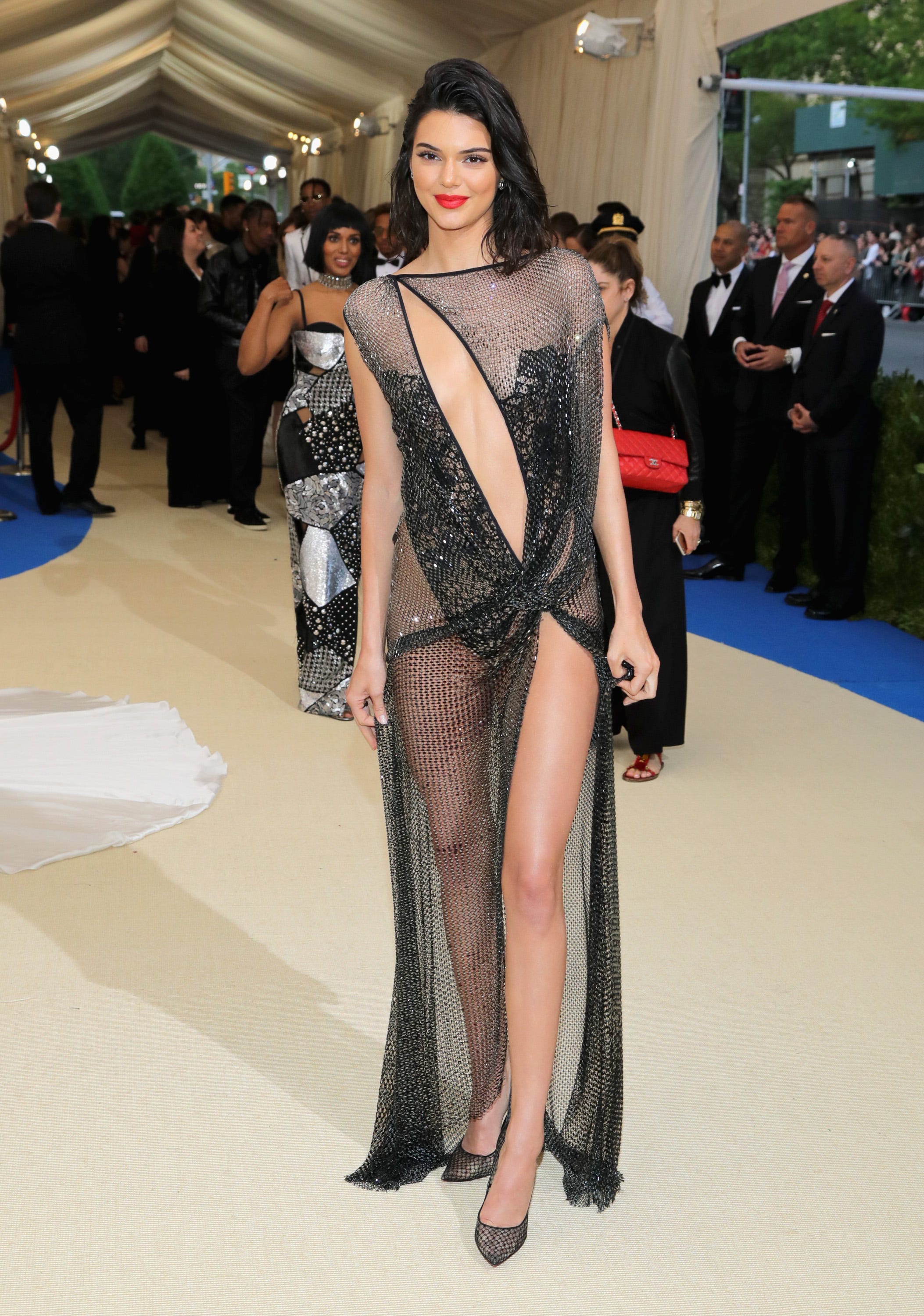 Her draped gown appears to have been tied at the waist, with a long slit in the skirt and deep cutout across the bodice. Her look was designed by La Perla.

Rita Ora was wrapped in red ribbon at the same ball. 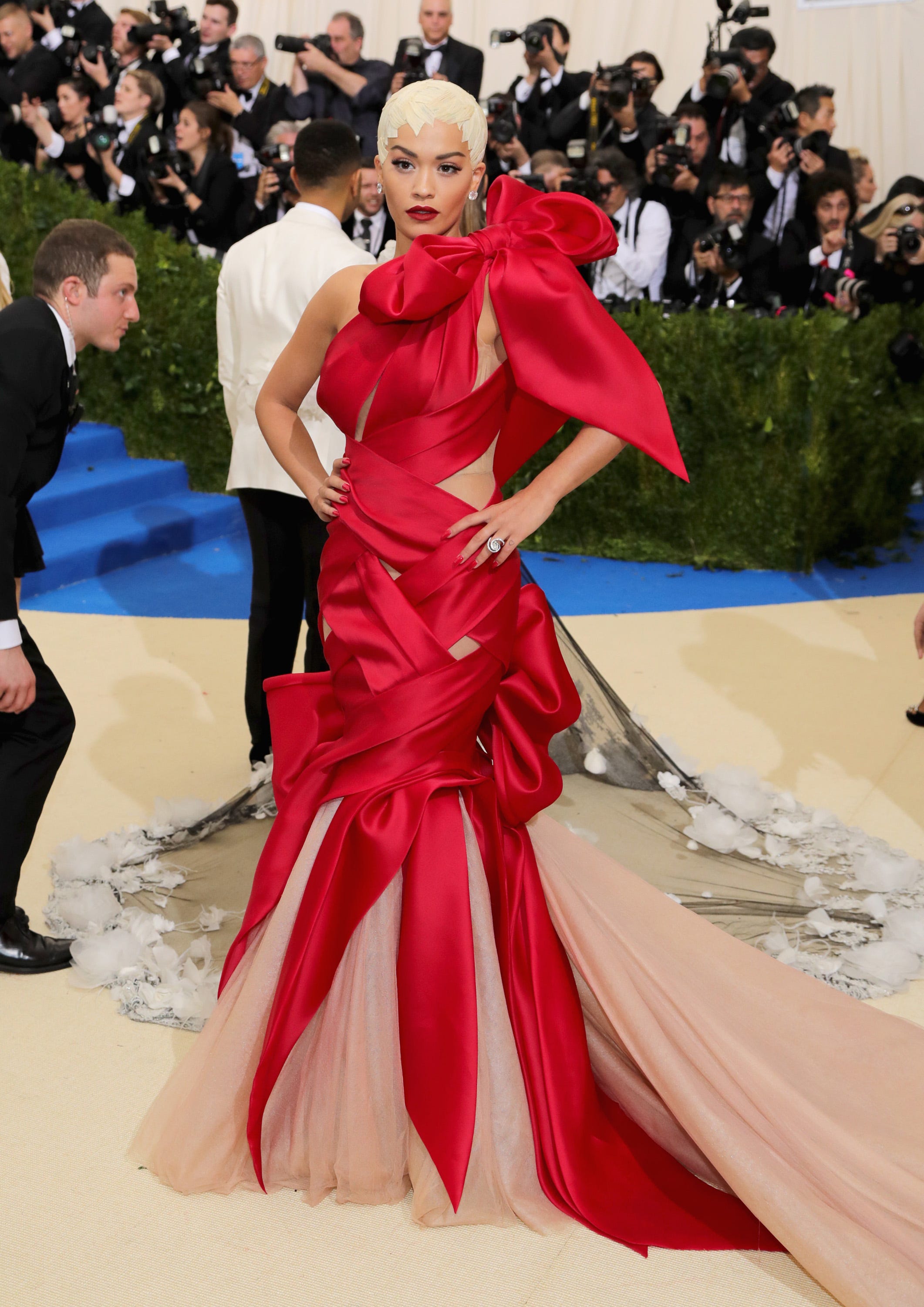 Her bow-inspired gown was designed by Marchesa, and paired with a light hairstyle and minimal jewellery.

At the 2018 Met Gala, Lily Aldridge stunned in a white gown with rips and cutouts. 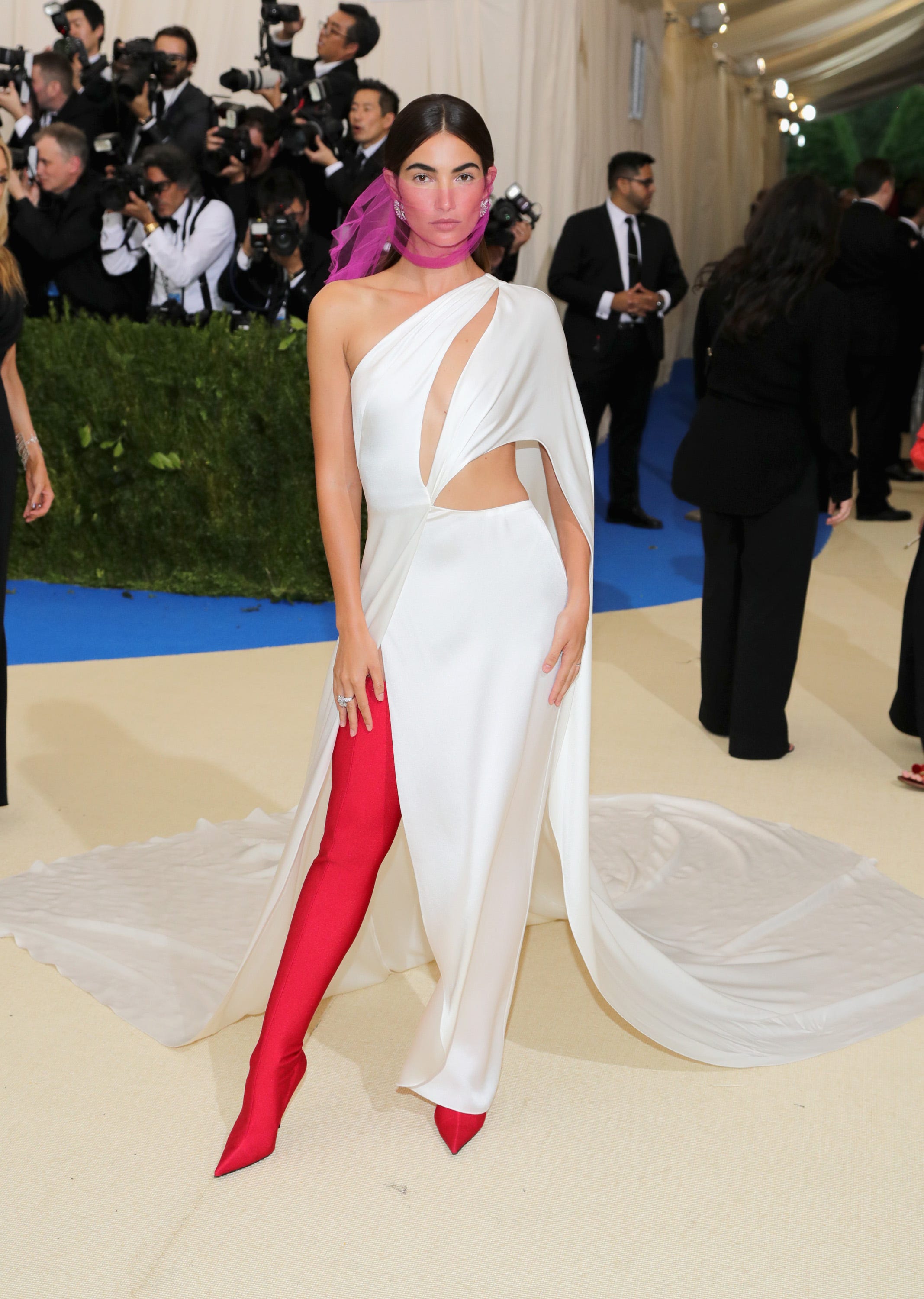 She paired the look with shocking red boots that doubled as leggings. The event was themed “Heavenly Bodies: Fashion and the Catholic Imagination.” 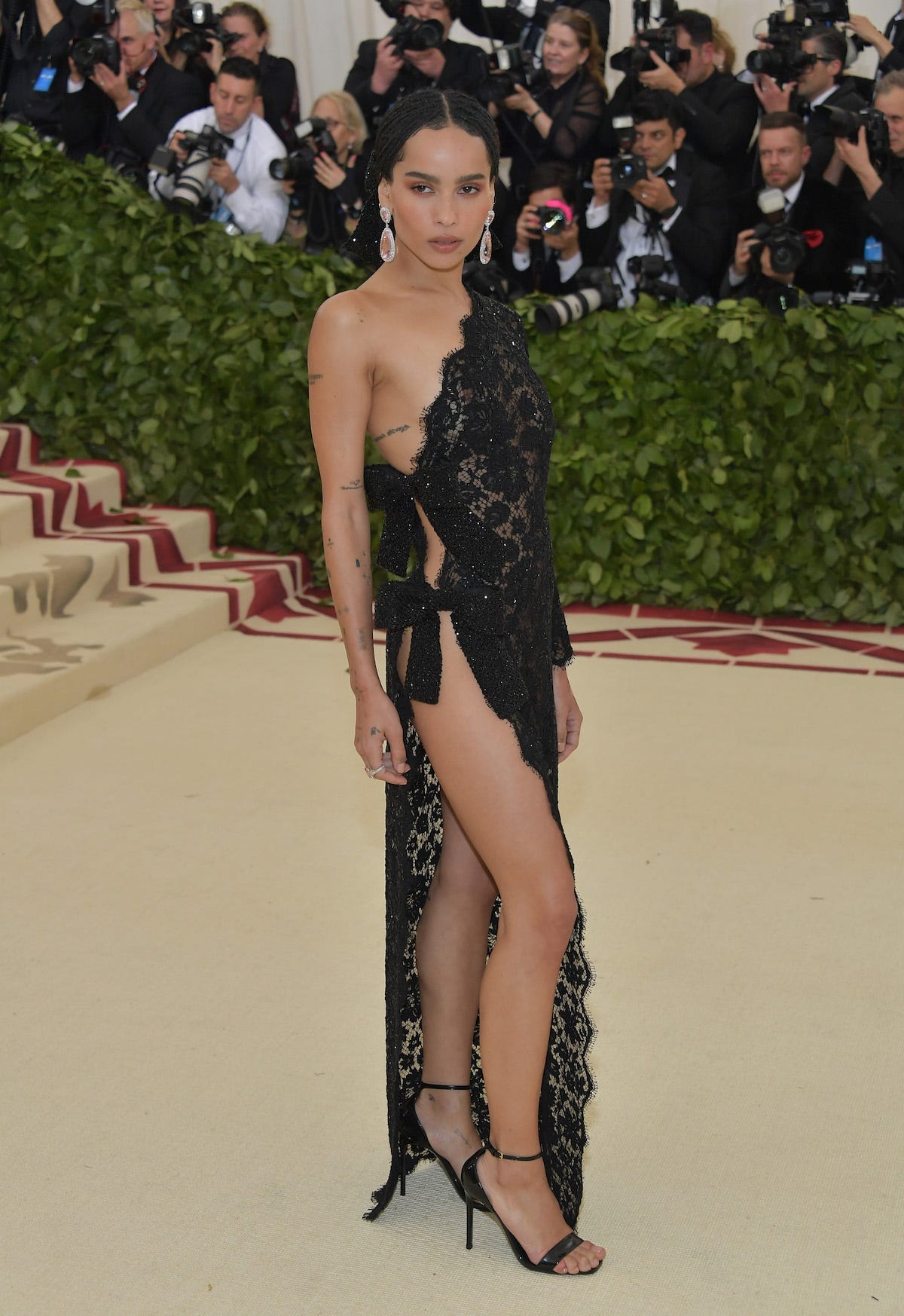 Her black lace gown was designed by Saint Laurent. It featured a single long sleeve, and was tied together with two bows on the right side, creating an open design that was one of the most daring on the red carpet.

Cara Delevingne incorporated fishnets into her take on the “naked” trend. 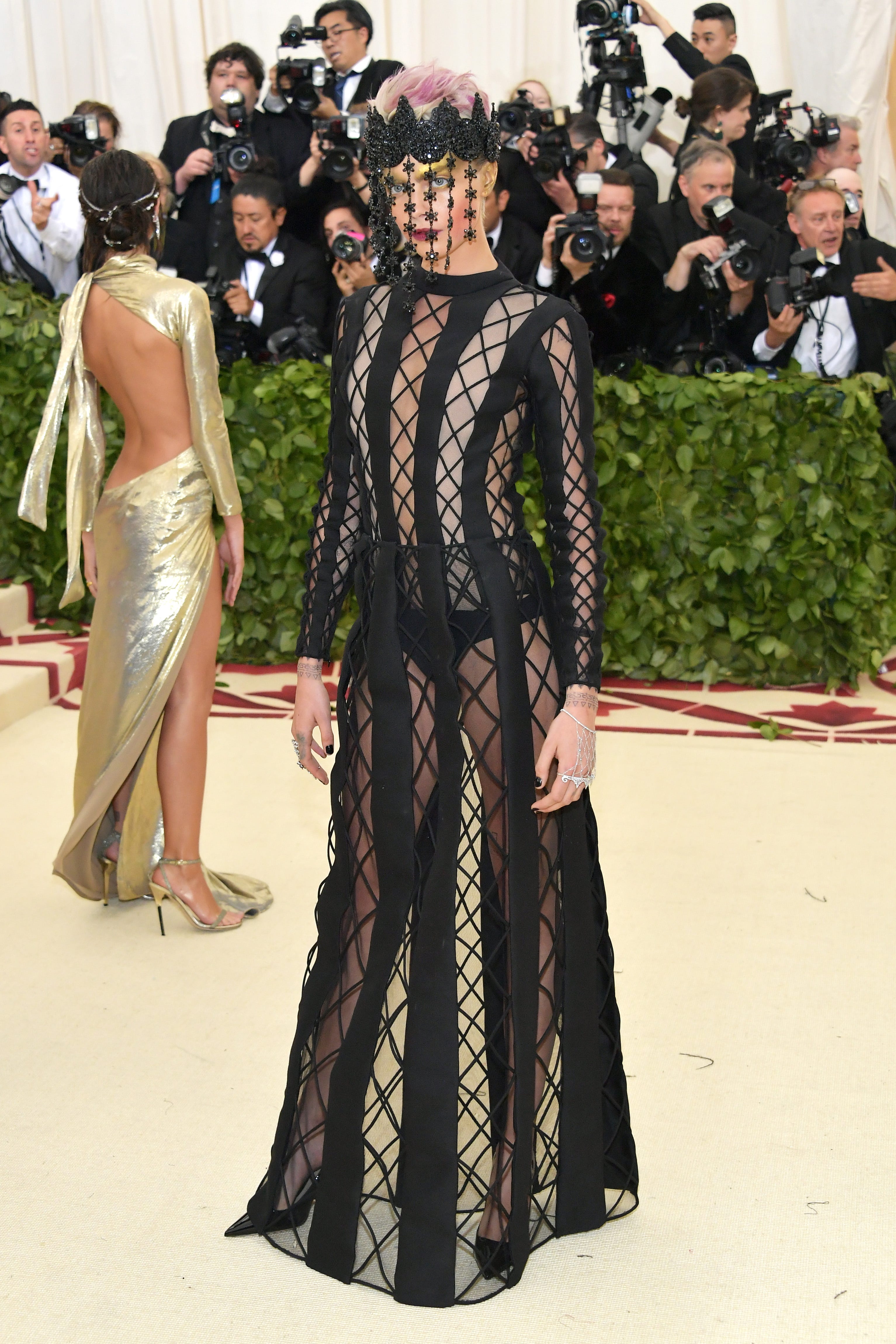 She perfectly matched the show’s theme with her medieval dress and matching crown. 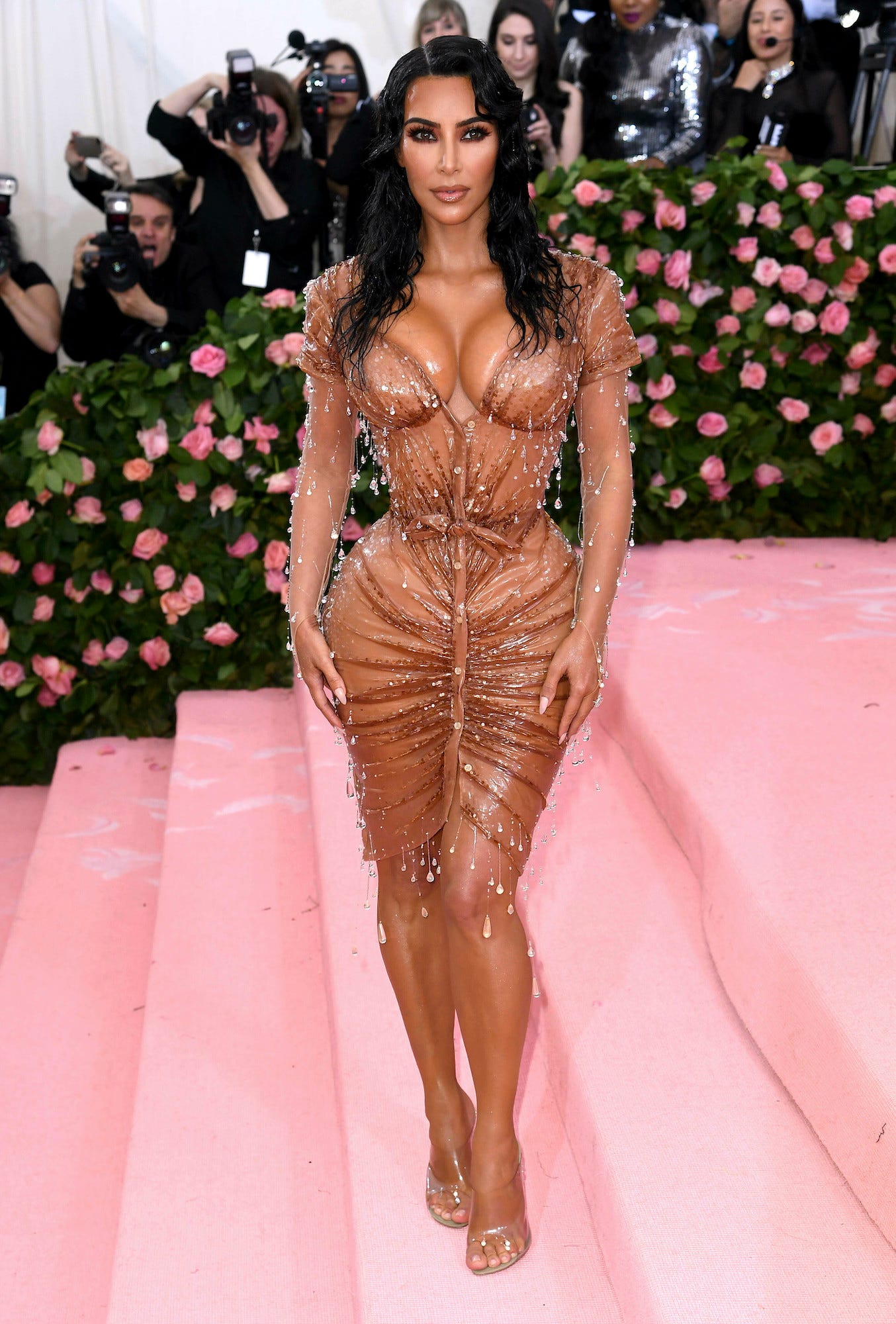 The nude minidress was covered in clear beads, which were meant to resemble water droplets. She completed the look with see-through Yeezy heels, and a wet-look hairstyle.

Constance Wu dazzled in a see-through gown for the “Camp: Notes on Fashion” event. 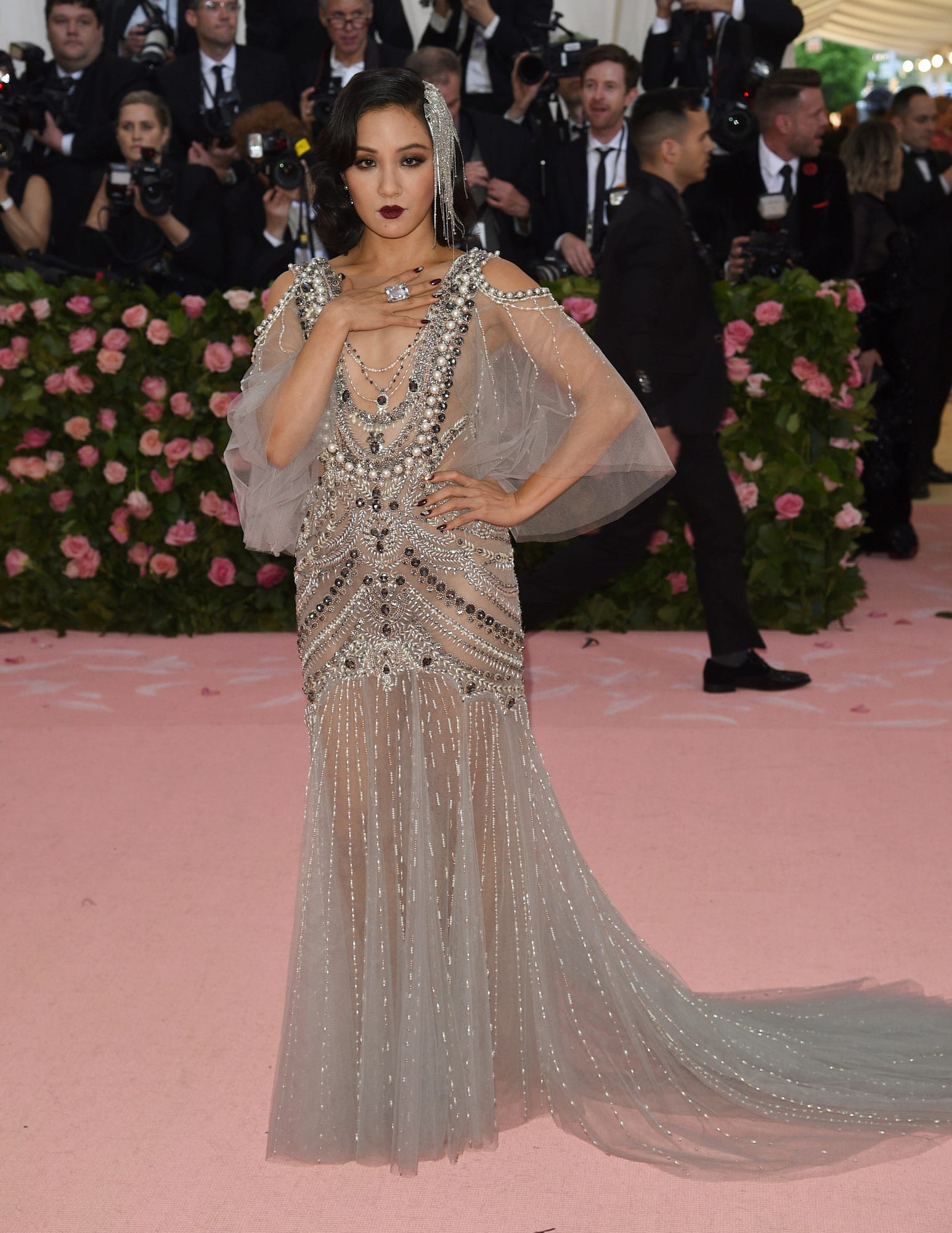 The grey fabric of her dress was completely sheer, and covered in white, black, and silver beading. 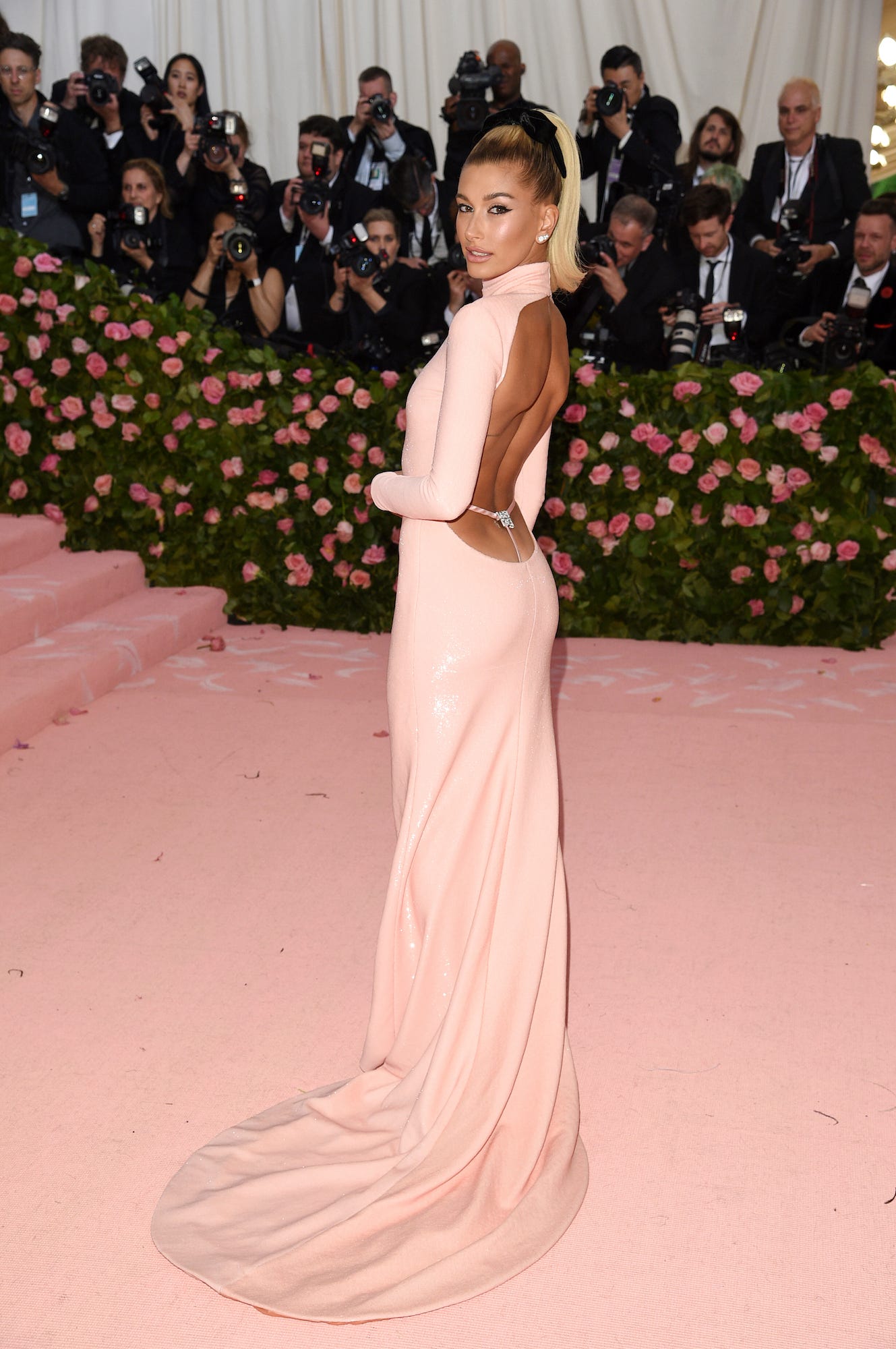 The design was backless, and extremely daring.

Jennifer Lopez brought some sparkle to the 2019 Met Gala in a Versace gown. 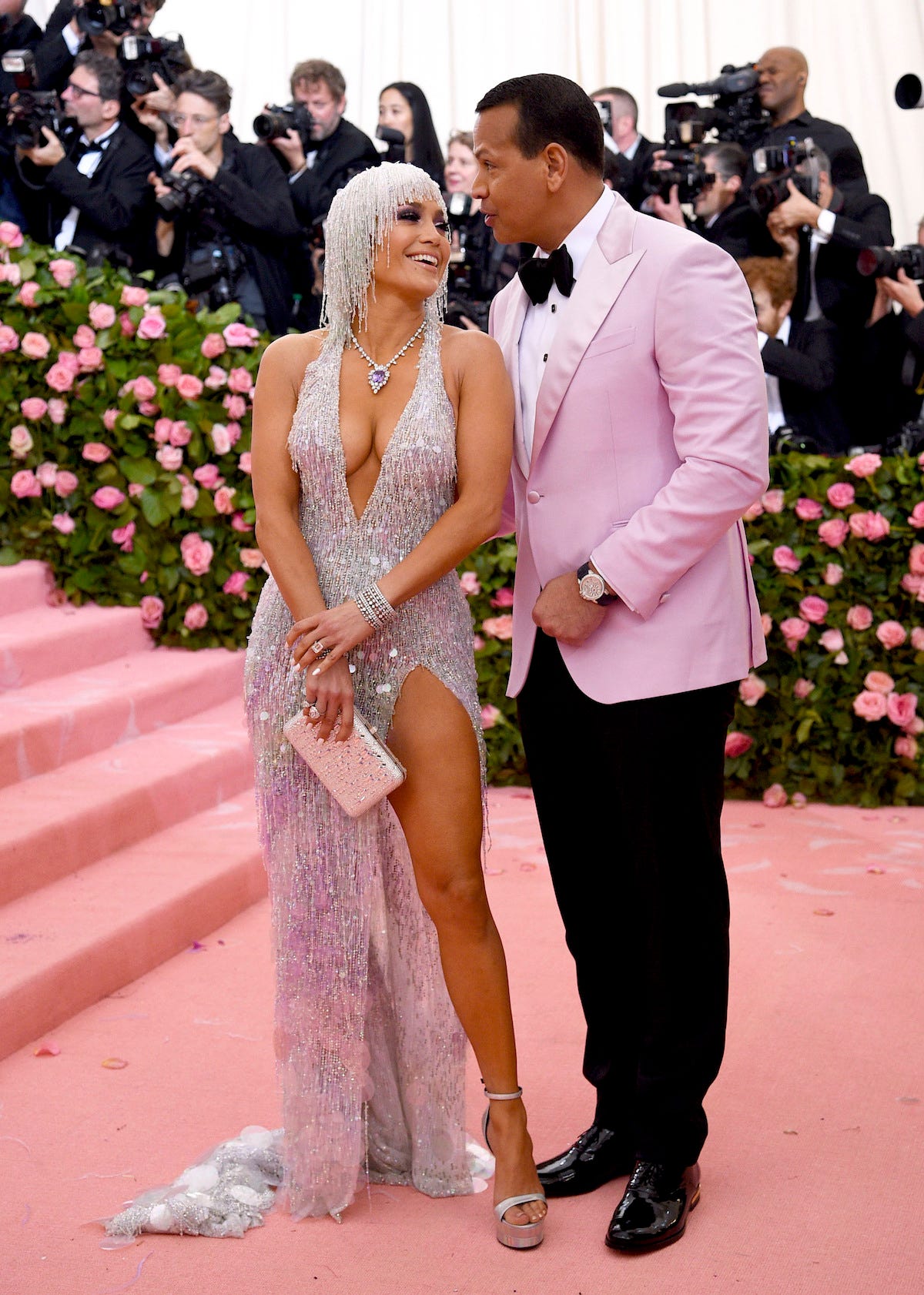 Her dress featured both a plunging neckline, and thigh-high slit.

Emily Ratajkowski wore one of the most daring dresses of the night. 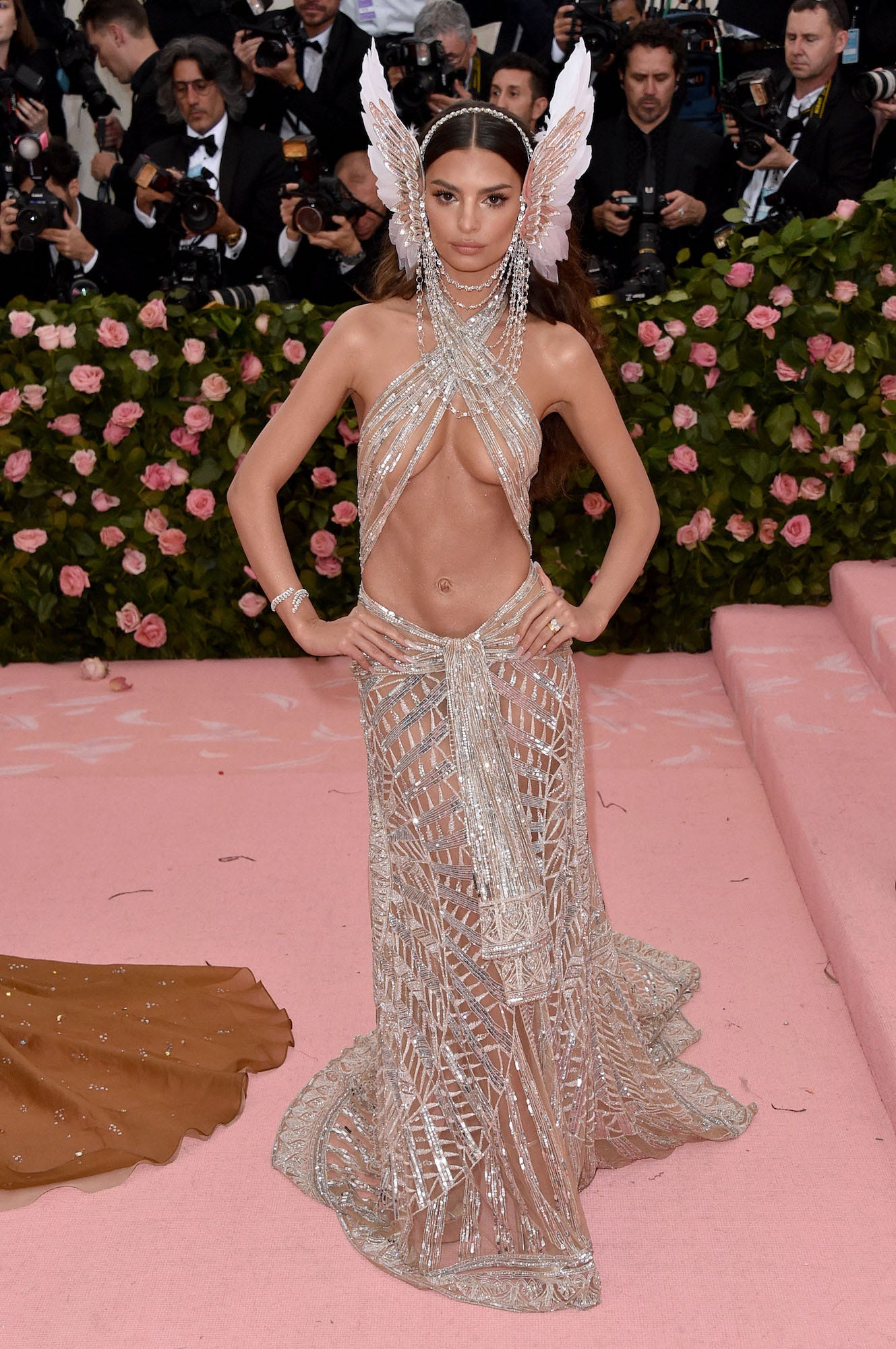 The model’s halter-style gown was inspired by Cher, and designed by Peter Dundas.

Stella Maxwell opted for a sheer design that was covered in sparkling stars. 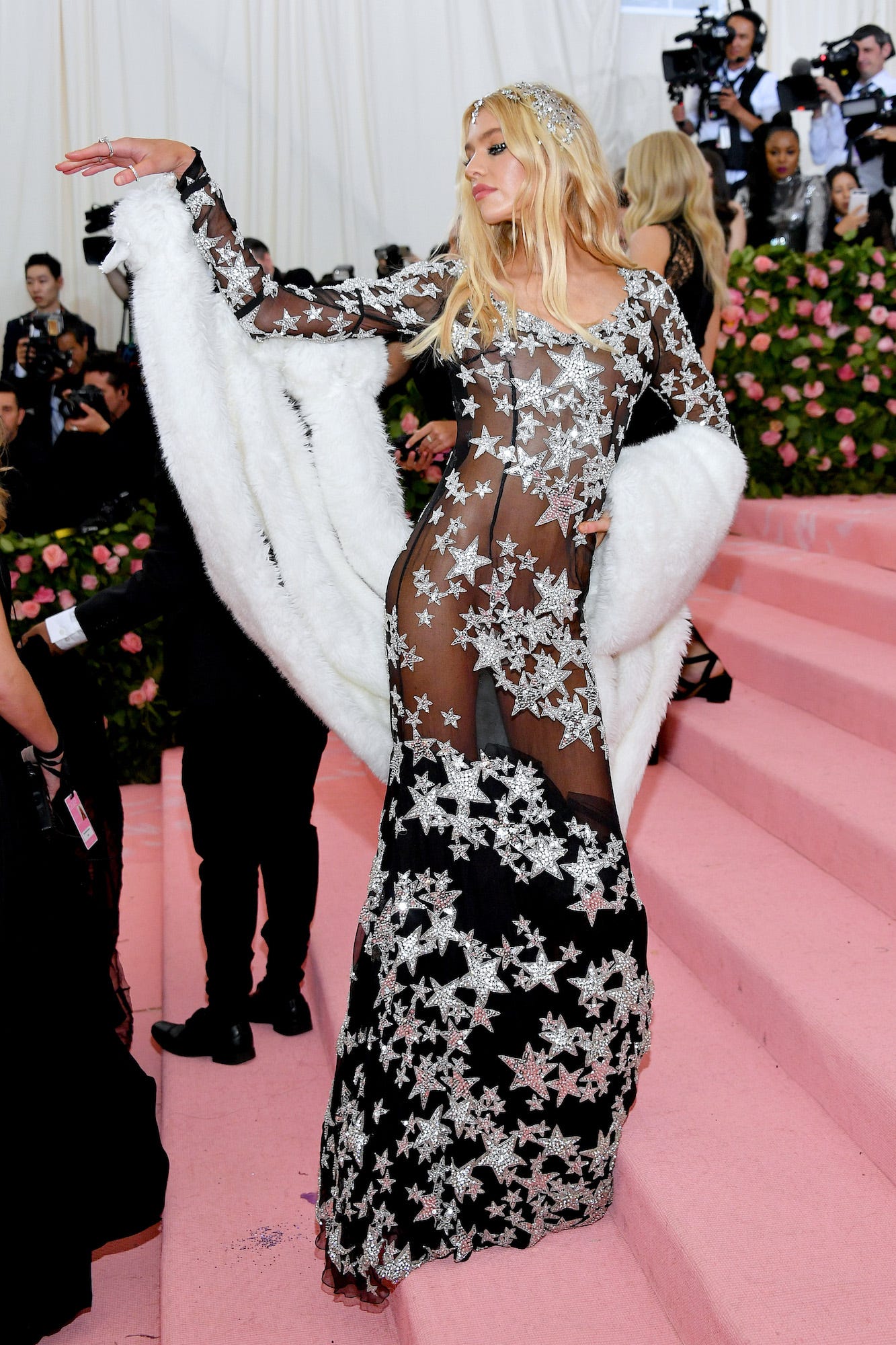 Her bold gown was designed by Moschino.