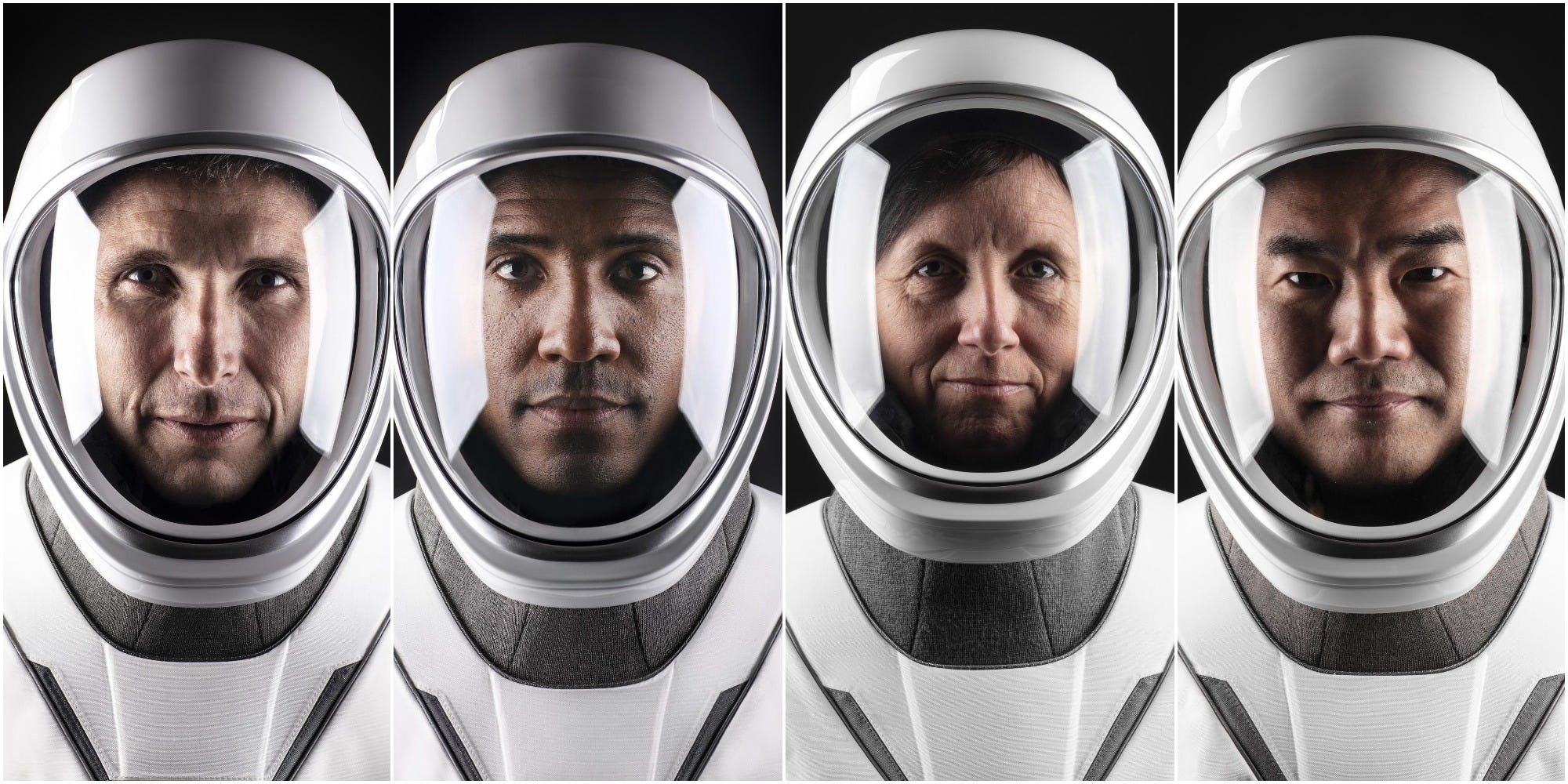 The astronauts’ Crew Dragon spaceship is set to dock to the International Space Station on Monday night, where NASA astronaut Kathleen Rubins and two Russian cosmonauts, Sergey Ryzhikov and Sergey Kud-Sverchkov, will be waiting to greet them.

The mission, called Crew-1, calls for the astronauts to stay on the ISS for the standard six months. During that time, they will conduct spacewalks, do science experiments, and work on regular station maintenance. Since humans haven’t launched from US soil since the Space Shuttle Program â€” which flew missions that lasted just a couple weeks â€” this will be the longest human spaceflight in NASA’s history. 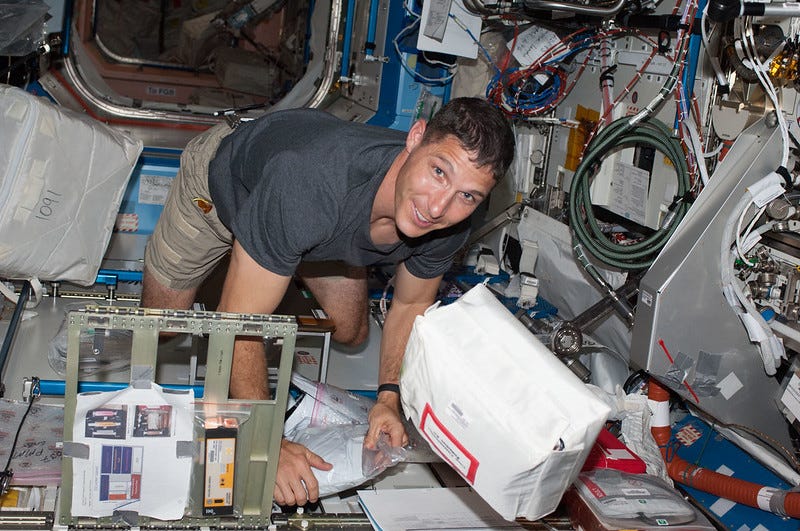 NASAAstronaut Mike Hopkins stows items in a locker in the Destiny laboratory of the International Space Station.

Hopkins grew up on a farm in Missouri. Before becoming a NASA astronaut in 2009, he was a special assistant to the Vice Chairman of the Joint Chiefs of Staff. A colonel in the Air Force, he served as a flight test engineer.

This is Hopkins’ second trip to space. He first went to the ISS in September 2013 as a member of Expedition 37/38. During that mission, Hopkins logged 166 days in space and conducted two spacewalks.

“I can’t wait to get to float again,” he told Business Insider.

Hopkins was announced as a Crew-1 member in 2018. As commander, he’s tasked with ensuring that the mission runs smoothly. That includes making a sacrifice: The ISS is currently short one crew quarters, so Hopkins may have to sleep on SpaceX’s Crew Dragon spacecraft, Resilience, which will remain docked to the ISS. Eventually, however, a sleeping pod is expected to be sent to the station on a cargo mission.

“The nerves start to really pile on as you get closer to launch,” Hopkins said during a pre-mission news conference. 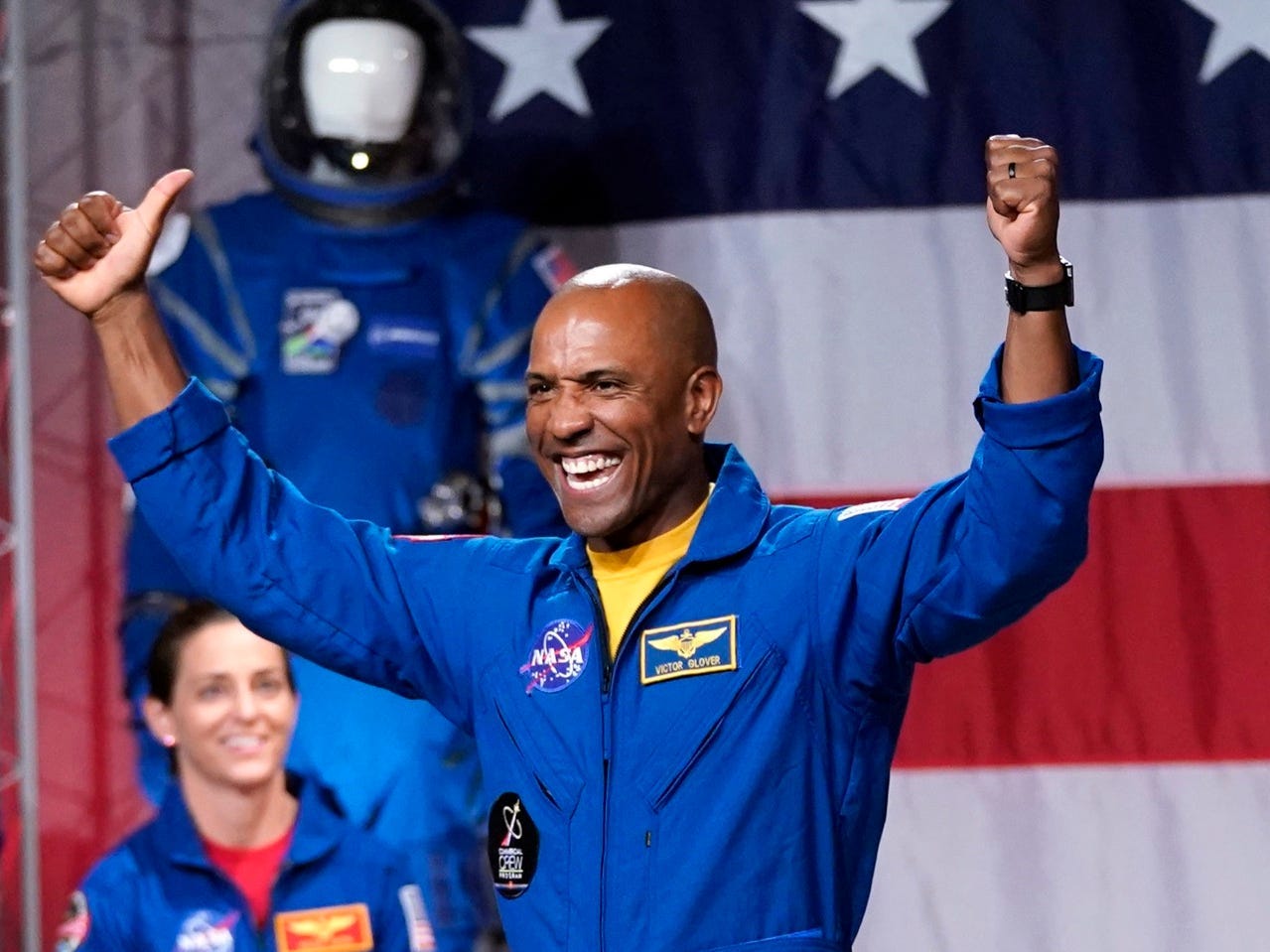 Glover is the only Crew-1 member who hadn’t flown in space before, but he had logged more than 3,000 hours of flying experience on Earth. Like Hopkins, he was selected as a Crew-1 member in 2018. He’s the mission’s pilot.

“I really look forward to every single bit of it,” he told Business Insider. “Every time I do something in space, it will be the first time.”

Glover became part of NASA’s 21st astronaut class in 2013, while serving as a Legislative Fellow in the US Senate. He is also a former Navy commander, aviator, and test pilot.

Glover and his wife, who both hail from California, have four children. As the Crew-1 mission approached, their family had to be careful about their behaviour during the pandemic, he said.

“We’ve essentially been isolating since mid-March,” Glover said. “They’re ready for me to go, one because they want to see their father accomplish one of his lifelong dreams, but they also really want to go back to school and have a chance to see their friends and go to the mall.” 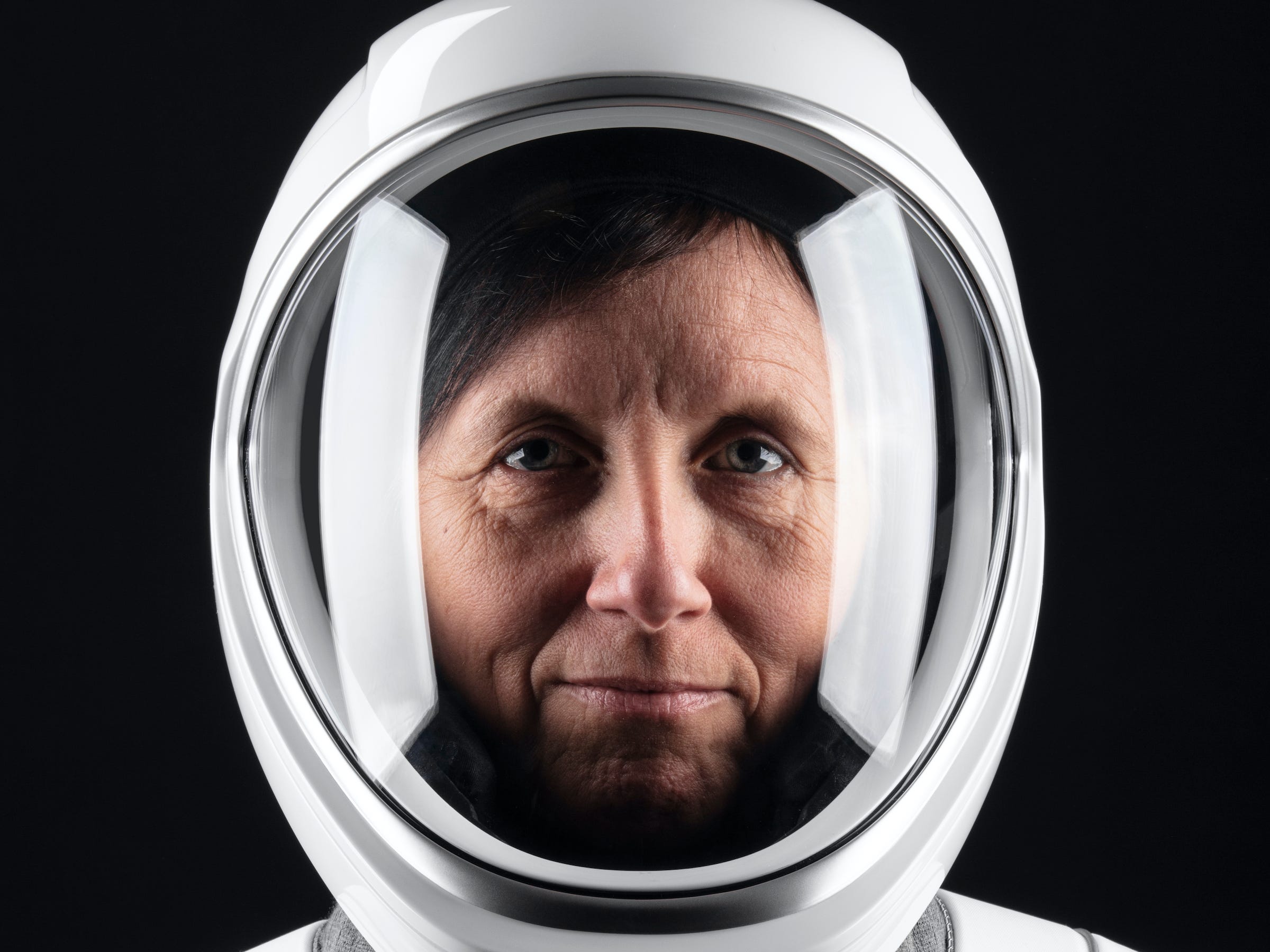 Walker, a mission specialist, was born in Houston, Texas. She was hired by NASA in 1995.

Walker worked on robotics hardware and other initiatives before being selected as an astronaut in 2004. She spent 161 days on the space station in 2010.

She was assigned to the Crew-1 mission in February of this year. With the Crew-1 launch, she became the first woman to fly to space in a commercial spacecraft.

“To be honest, I haven’t really put much thought into the fact that I am the first woman on a commercial vehicle,” Walker told Business Insider. “I expect to be the first of many, and look forward to the day that we don’t have to note such events.”

Ahead of the launch, Walker â€” who is married to astronaut Andy Thomas â€” said she was looking forward to having a 360-degree view of Earth again.

“In some ways, it’s the start of all those science-fiction movies that we watched as kids coming to fruition where you’ve got entities living and working out in space and off the planet,” she said. “Just to be at the forefront of that is enormously exciting.” 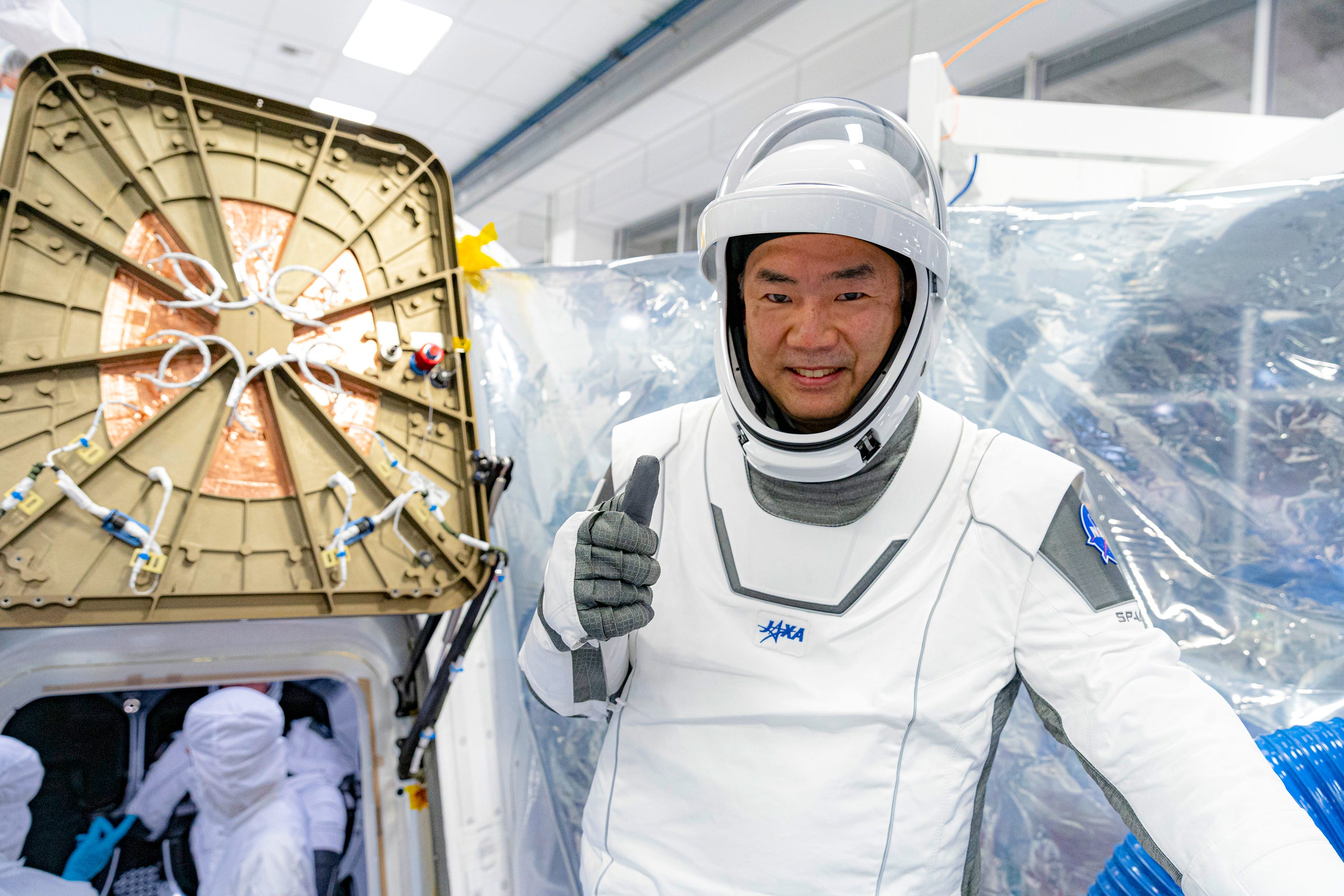 Noguchi, also a mission specialist, is an aeronautical engineer from Japan. A former Boy Scout, he was selected as an astronaut in 1996 and has spent 177 days in space.

Like Walker, he was also appointed to the Crew-1 mission in 2020. He is the team’s only non-NASA member, and the fifth Japanese astronaut to fly in space.

Noguchi was on the US Space Shuttle in 2005 and a Russian Soyuz expedition in 2009. Now, with SpaceX, he’s the third person ever to fly on three different launch systems.

“I’ll be the first one to experience Space Shuttle, Soyuz, and SpaceX. I feel very honoured,” Noguchi told Business Insider. “Obviously, this is a transition era. This is the beginning of the commercial spaceflight program. I’m happy to live long enough, from the Space Shuttle age all the way to commercial.”