Scientists are investigating whether the new COVID-19 variant is more infectious in kids. Here's what we know so far. 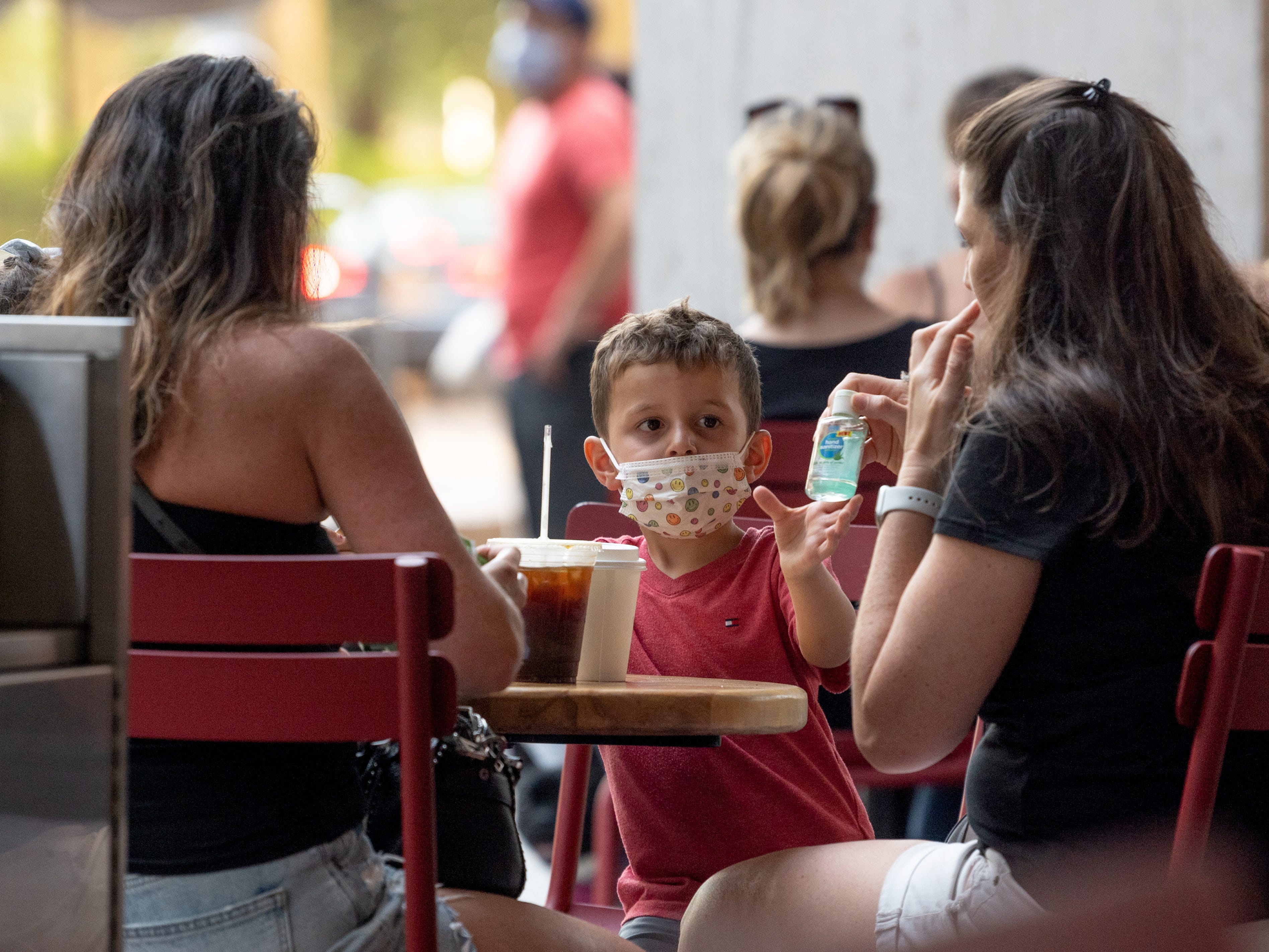 GettyA child wears mask and reaches for hand sanitizer in a cafe.

A variant of coronavirus called B.1.1.7 is causing major disruption, precipitating new lockdowns and travel restrictions.

Experts are beginning to suggest that children are more susceptible to B.1.1.7. â€” and the UK’s biggest teaching union has asked for schools to remain closed for two weeks from January 4.

The evidence, for now, remains inconclusive, and scientists continue to investigate. Here’s what we know so far.

Why is the variant more infectious?

Increasing numbers of people are becoming infected with COVID-19 â€” the disease that causes coronavirus â€” and scientists say that B.1.1.7 is probably more infectious, but evidence is still emerging.

Dr. Anthony Fauci, director of the US National Institute of Allergy and Infectious Diseases, said on Tuesday that the UK variant is likely to have already spread to the US.

Further information is expected in the coming weeks, but it’s not thought that B.1.1.7 is more or less deadly than the original virus.

It’s normal for a virus to mutate, and there have been tens of thousands of coronavirus mutations already.

The new variant, however, significantly changes the virus, potentially altering its behaviour. For example, B.1.1.7 has changes in the spike protein â€” the part of the virus that is used to infect cells â€” that could mean it gets into cells more easily.

The spike protein is also the target for vaccines, but experts think that vaccines will still work.

Are children more susceptible to the new variant?

“There is a hint that it has a higher propensity to infect children,” Professor Neil Ferguson told reporters on Monday. He is an infectious disease epidemiologist at Imperial College London and also member of the New and Emerging Respiratory Virus Threats Group â€” NERVTAG â€” the UK government’s advisory group.

The reason for the difference could be down to the fact that the body’s ACE-2 receptor, where the virus binds, is a bit different in children and adults.

Ferguson told the Commons select committee on Wednesday that there had been anecdotal reports of the variant in schools in areas of England now under the strictest lockdown.

The concern contrasts with previous variants of coronavirus circulating in the UK. Chris Whitty, the UK chief medical officer, said in a statement in August that there was reasonable â€” although not conclusive â€” evidence that primary school children were less likely to catch COVID-19 than the general population.

Professor Wendy Barclay, head of the Department of Infectious Disease at Imperial College London, and a NERVTAG member, said in a briefing to reporters on Tuesday, that the B.1.1.7 variant might bind to the ACE-2 receptor better in children, adding that she was speculating.

“I have not seen any data to say that it is actually being transmitted more in children,” said Barclay.

Barclay explained that it’s unusual for children not be affected by a respiratory virus.

“We know that almost all other respiratory infections spread amongst children. It wouldn’t surprise me that eventually they ended up spreading quite freely [amongst children],” she said,

Ferguson said on Wednesday that there was a small â€” but statistically significant â€” increased proportion of cases under 15-years-old with the new variant, compared with the old variant. He said that it doesn’t mean it will affect children any worse.

“I would emphasise â€” while it is a significant shift [in age distribution], it’s not a huge shift. It’s relatively small,” he added.

‘Too early to tell’

Ferguson, whose coronavirus predictions triggered the first UK lockdown, said that scientists needed to gather more data to see how the variant behaves.

Speaking with BBC Radio 4 on Monday, Ferguson said he expected a decline of all the variants of the virus in circulation while schools remain closed for the holidays, but that it’s too early to say precisely what additional measures might be needed in the new year.

Some scientists have advocated closing schools only as a last resort. Professor Deenan Pillay, a professor of virology at University College London, told the Guardian on Monday that the focus should be on supporting schools to operate as safely as possible.

“It’s easy to start to think of this variant as a different virus, but no, it’s the same virus. And it’s transmitted in the same way,” he said.

The UK government could rely on testing to support schools.

“If we work together on testing, we can keep schools open,” said Gavin Williamson, UK Education Secretary said in a statement on Monday.

Experts recommend that measures that restrict the spread of the virus, like social distancing, remain paramount. The challenge will come in 2021 when decisions need to be made about schools.

“The real question then is â€” how much are we able to relax measures in the new year, and still retain control?” said Ferguson.