The UK's hospital system is on the brink of collapse, forcing overworked staff to postpone cancer treatments, stretch oxygen supplies, and put themselves at risk of catching COVID-19 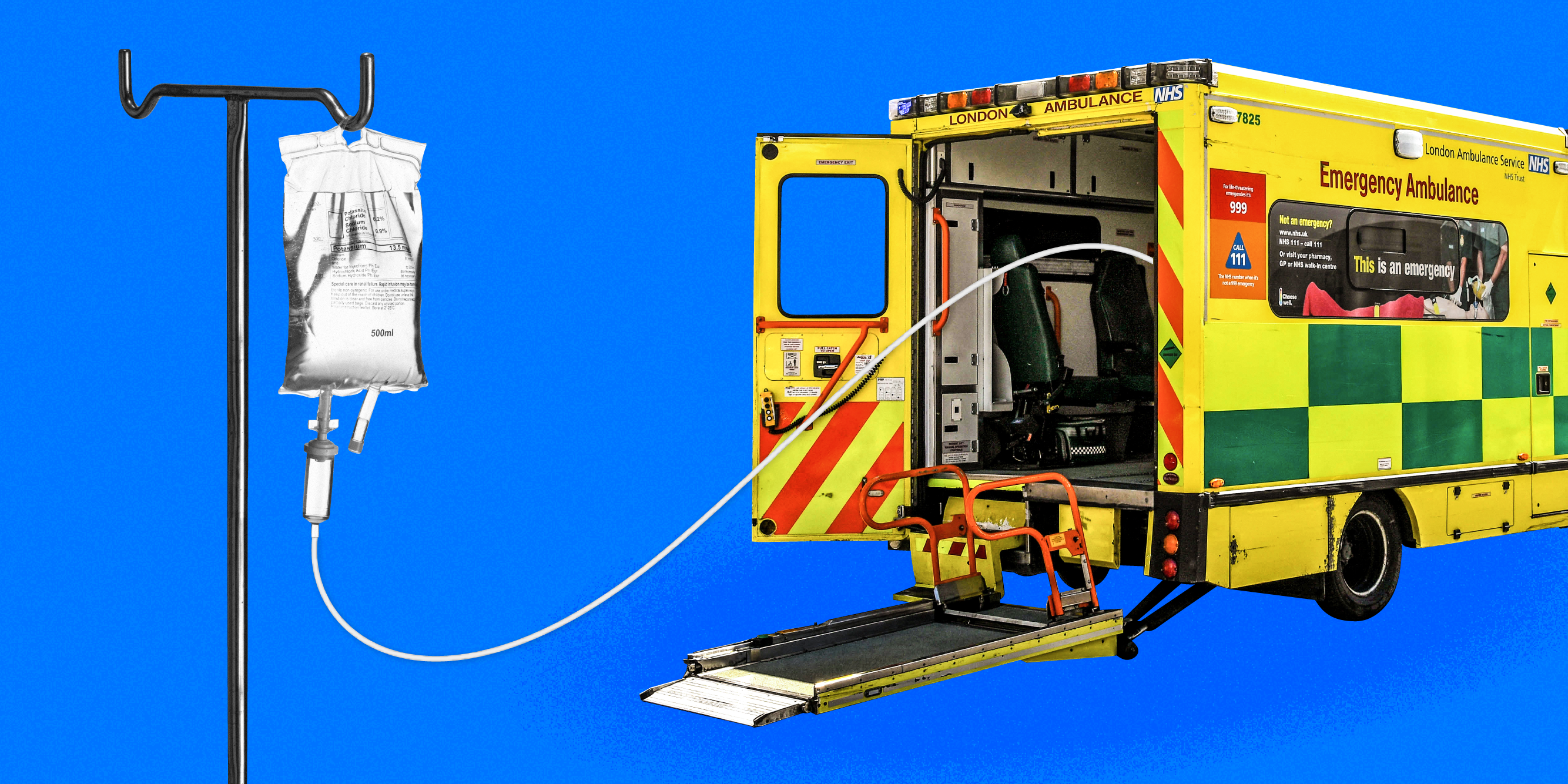 As you walk past the oxygen tank outside one London hospital, you can hear it creaking and clanking because of just how much oxygen it’s pumping out to support patients inside the building.

That’s according to Dr. Tom Dolphin, an anaesthetic consultant in the city, who told Insider that medical staff across the UK are anxious about oxygen running out. Health Secretary Matt Hancock said Tuesday that the health service wasn’t facing an oxygen shortage â€” but admitted some hospitals may have to transfer COVID-19 patients to other hospitals to get them the oxygen they need.

Without sufficient oxygen supplies, doctors and nurses can’t properly treat patients suffering from shortness of breath â€” one of the many symptoms of COVID-19.

Diminishing oxygen levels are just one part of a serious crisis brewing in the country. The UK’s National Health Service (NHS) is on the brink of collapse as floods of patients suffering from COVID-19 overwhelm hospitals, and a recent surge in cases will likely make things work.

According to the latest government statistics, 417,570 Brits tested positive between January 4 and 10, which is 14% more than the previous week. UK prime minister Boris Johnson said in a meeting Wednesday there was a “very substantial” risk of intensive care capacity in hospitals being “overtopped.” He added that the situation in the NHS was “very, very tough” and the pressure on staff was “colossal”.

Chris Whitty, England’s chief medical officer, warned Monday that the country was entering the “most dangerous time” of the pandemic and that the “next few weeks are going to be the worst” for the NHS.


Read more:
I was offered a covid vaccine even though I’m young and healthy. Here’s how I did it.

Dolphin told Insider that hospitals across the nation suddenly got very busy in the 48 hours after January 6. He said that NHS staff are so afraid of services being stretched that some hospitals will likely have to shut their doors to patients without COVID-19, and send them to other hospitals.

“The sheer size of this wave and the ferocity of it has really left us struggling as an NHS nationally to cope, which is why we’re seeing people being treated in car parks in some hospitals,” Dolphin said.

In some cases, patients are waiting up to 10 hours in the back of ambulances to be transferred into hospitals, a leading paramedic, Tracy Nicholls, told Sky News on January 10.

Healthcare staff are used to distressing scenes â€” but the relentlessness of the current pressure means doctors are “absolutely run ragged” and “suffering psychologically” trying to keep the health service together, Dolphin said.

He referred to a British Medical Association study that revealed nearly half of doctors have developed depression, anxiety, stress, or burnout from their work.

This will have long-term consequences for the NHS, Dolphin said.

Cancer operations are being postponed

After a new, more transmissible coronavirus strain was found in south-east England in December, and has since spread round the country, UK hospitals have become some of the fullest in Europe. Medical staff have been forced to cancel planned operations because COVID-19 sufferers are displacing other patients.

On January 6, an NHS presentation to senior doctors, reported by the Financial Times, forecasted hospitals in London would be short of nearly 2,000 beds by January 19 as a “best-case scenario.” The following day, NHS officials warned that 800 patients were being admitted to hospitals in the capital city every day, and that the health service would be overwhelmed in two weeks if cases don’t drop significantly.

“Some cancer work is being postponed again like it was in March and April which is not where we want to be. But we just don’t have the staff, the space, or the capacity in the hospital to manage those patients,” Dolphin said.

This isn’t just the case in London.

Dr. Danish Dewan currently works as a locum doctor in a hospital in Kent, south-east England. He told Insider that the cancer ward at the hospital has been emptied to accommodate COVID-19 patients. 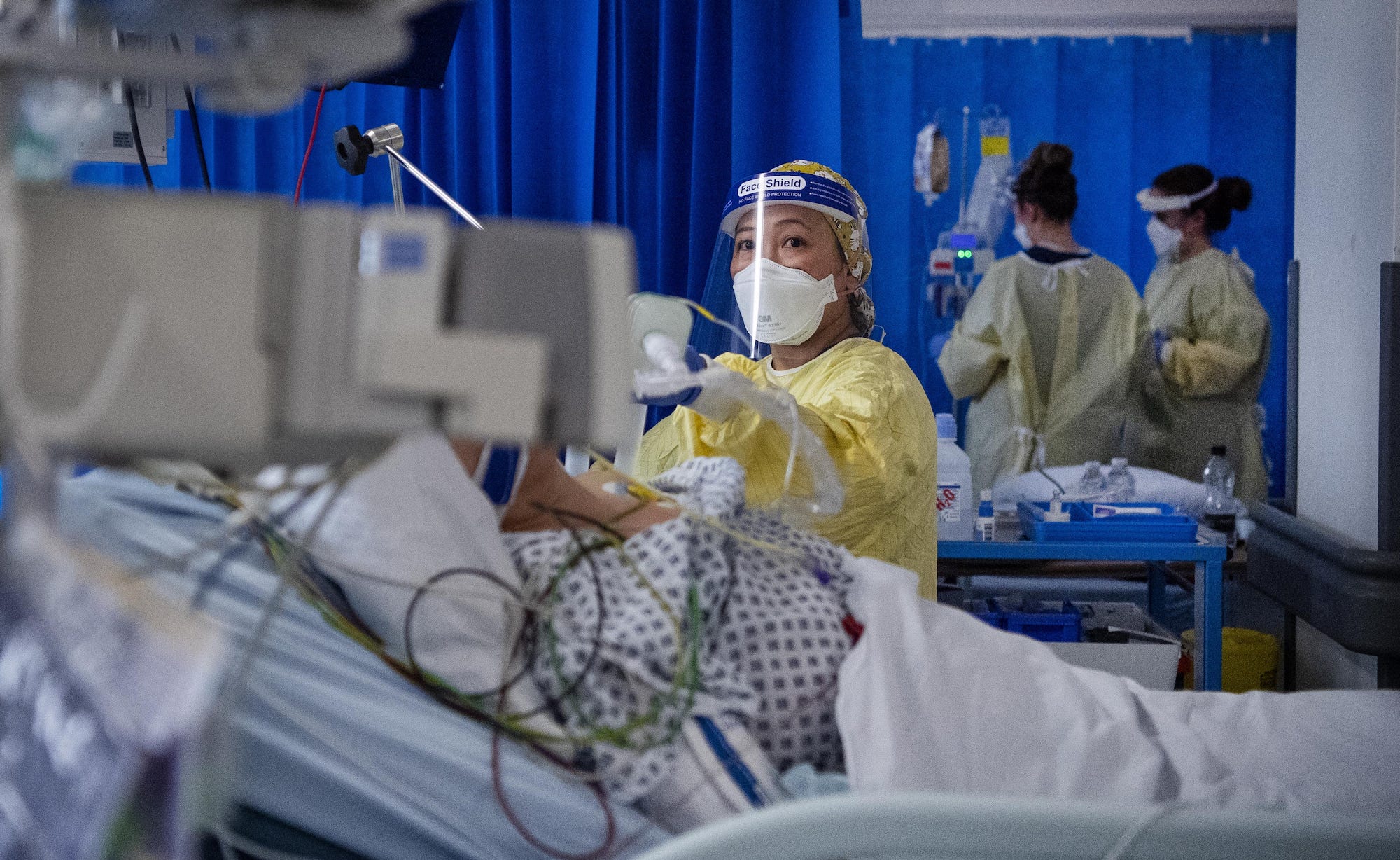 “Every day or every week a new ward has to be opened up to accommodate the new patients, and subsequently we have to hire more and more temporary staff,” Dewan said.

Every one of his patients has “COVID pneumonia” written next to their name, he said.

Seeing patients with the same illness every hour of every day can be tiresome, according to Dewan, who said life for most doctors, despite the chaos enveloping the health system, can be almost “dull” in its repetitiveness.

“It’s the mundanity of it … Every single patient coming into the hospital has COVID,” he said.

Hospitals in Nottingham, in the East Midlands region, are seeing a rise in COVID-19-related admissions and have more patients now than during the peak of the first wave in April, according to Dr. Keith Girling, a medical director at Nottingham University Hospitals Trust.

“The increase in COVID positive cases within our hospitals started to accelerate over the Christmas period which is very concerning,” Girling said in a statement, but added they are making “excellent progress” on vaccinations.

The rollout of the vaccine has been “chaotic”

Instead of doing his normal job anaesthetizing patients for operations and other procedures, Dolphin has retrained, and now spends his days vaccinating as many people as he can.

In order to be able to keep services afloat, Dolphin said that all healthcare workers must be vaccinated by the end of January. More than one in seven staff are off work sick in some hospitals, he said.

According to the chair of the British Medical Association, Chaand Nagpaul, there are more than 46,000 hospital staff off sick with COVID-19, per the Guardian â€” nearly 4% of the entire 1.3 million NHS workforce.

Johnson saidMonday that 2 million people in the country have already received a coronavirus vaccine, and about 400,000 people have had two doses. The plan is to get 13 million people vaccinated by mid-February â€” but Dolphin described the vaccine rollout as “chaotic.”

“We are at that point of potential catastrophe for the NHS and if we don’t vaccinate the healthcare staff first, there won’t be an NHS for people to come to.”

Nearly half of London’s hospital workers, including ambulance workers, cleaners, porters, and frontline nurses, are still waiting to be offered a COVID-19 vaccine, according to a survey by the trade union GMB, cited by the Independent Wednesday.

Dolphin compared it to a passenger on a plane putting an oxygen mask on someone else before themselves. “You’ve got to look after the healthcare staff otherwise we’re not going to be there to help everybody else.”

Hospitals are “stretched to their limits”

Staff shortages are rife in Scotland, too. An NHS nurse at a Scottish hospital, who calls herself NHSActivistRN on Twitter and declined to giver her name for privacy reasons, emphasised the impact of the shortages on medics working in hospitals.

She told Insider via Twitter that shortages mean staff are being moved to other areas of the hospital to work with people they don’t know, which is “disconcerting.” As well as shifts being very demanding, she also said staff fear catching coronavirus on the wards and passing it to their families.

“Many staff aren’t vaccinated, so we don’t have that protection,” she said.

Dr. Naz Sakib, who works in north-west England, also told Insider via Twitter that his hospital was “stretched to its limits with regards to staffing levels and increased service pressure.”

While he declined to give specifics, he said staff are finding their days very challenging, and urged the public to “keep us in your thoughts.”