Experts say the cruise ship quarantine was unjustified and violated human rights, letting the coronavirus 'literally pick them off one by one' 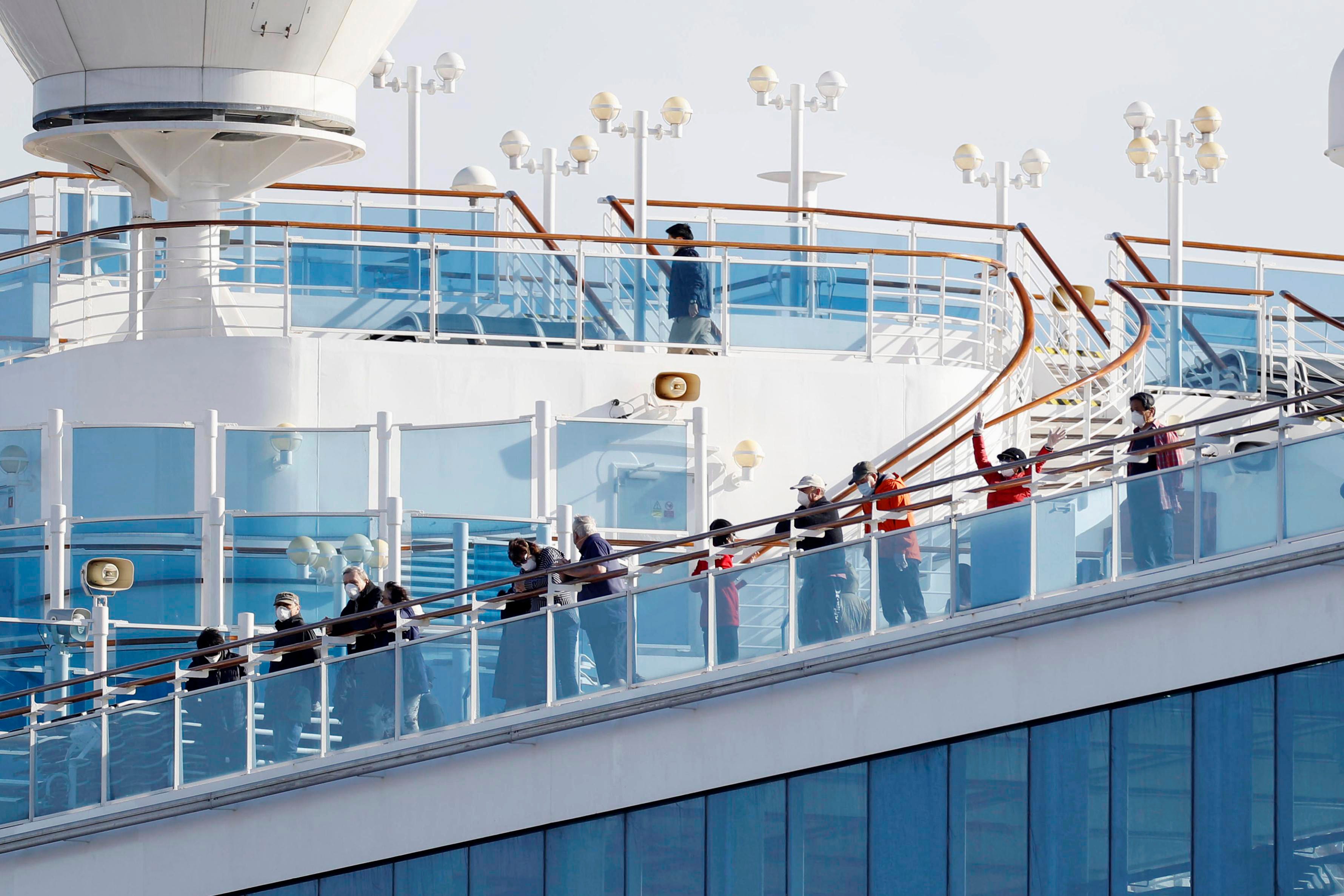 Associated PressPassengers stand on the deck of the Diamond Princess cruise ship anchored at Yokohama Port in Yokohama, near Tokyo, Wednesday, February 12, 2020.

The Diamond Princess ship, which sits floating alongside Yokohama, Japan, has become the largest incubator of cases of the novel coronavirus, COVID-19, outside China.

For the past two weeks of quarantine, the number of people living in small cabins aboard the waves there – originally 3,711 crewmembers and guests – has been rapidly dwindling, as at least 621 cases of the virus have been diagnosed on board, and those ill people taken ashore for medical care by the Japanese Ministry of Health.

Americans, Canadians, Australians, and people from Hong Kong on the ship have been given the option to fly home to dry land for another 14-day period of isolation, and the most elderly, vulnerable passengers over 80 years old on the ship have been offered rooms and bento boxes on land to finish out their quarantines.

As for the rest of the healthy passengers who are still on board the Diamond Princess, today they are beginning to disembark, in a process that will take “several consecutive days” according to the cruise company, as passengers are tested, and test results confirmed negative, before people will be allowed to get off.

But the quarantining process doesn’t necessarily end there for everyone.

Anyone who shared a cabin with someone who came down with a case of COVID-19 while on board must stay on the ship even longer:14 more days from when they separated from their sick roommate. Many countries, including the US, won’t let any passengers who’ve stayed aboard come home for another two weeks after they leave the ship, either. (There are more than 100 US citizens still on board the Diamond Princess, according to the US Centres for Disease Control.)

Public health and bioethics experts say that this whole lockdown was completely unnecessary to begin with, and that the extra cases that incubated on board the ship could’ve been easily avoided, if passengers had just been let off, and monitored for coronavirus symptoms after they left.

“The quarantine was not justified, and violated the individual rights of the passengers while allowing the virus to literally pick them off one-by-one,” Dr. Amesh Adalja with the Johns Hopkins Centre for Health Security told Business Insider in an email. “The 14-day stipulation was meaningless in a context with new infections and new transmission episodes.”

Others have been similarly vocal.

“I’d like to sugarcoat it and try to be diplomatic about it, but it failed,” Fauci said. “People were getting infected on that ship. Something went awry.”

Bioethicist and Rogue Bioethics co-founder Kelly Hills said that the quarantine on board the Diamond Princess wasn’t just ineffective, it was “absolutely pointless.”

“I don’t think that we have seen enough proof, in any cases, that quarantine is necessary for this particular virus,” she said. “It doesn’t meet what we would consider the minimum standards necessary for violating somebody’s civil rights.”

While COVID-19 appears to be easily transmissible among people living in close quarters (like, say, on a cruise ship) only about 2% of COVID-19 virus cases so far are fatal, which makes the disease far less deadly than SARS, while also far less transmissible than a virus like the measles (which infects about 90% of unprotected people who come in contact with it).

Hills said that self-containment measures at home would be more humane, and ultimately, probably more effective than quarantines for keeping healthy people disease-free.

“People just don’t like to be forced to do things, especially if they don’t feel like there’s good justification,” she said.

Take the case of one Toronto SARS quarantine, in 2003. Less than 60% of the city actually complied with that order, and researchers later qualified it as both inefficient and ineffective, though “massive in scale.”

Georgetown Law professor Lawrence Gostin told Business Insider in an email that other COVID-19 quarantines taking place in military bases around the US, where hundreds more people have been confined, “appear to be lawful,” but said “the key issue is whether they are justified.”

Other quarantine-like measures, happening inside Hubei province in China (where the virus originated) are not true quarantines, but instead aim to restrict people’s movements, and encourage them to monitor for symptoms, so everyone has fewer chances to come in contact with the novel virus.

“If somebody is sick, keep an eye on them, ask them to stay indoors, explain why they need to stay indoors,” Hills said. “If they get sicker to the point where they need an ICU or other medical intervention, then you take them to the hospital, but there’s no need to overwhelm hospitals.”

In Singapore, Prime Minister Lee Hsien Loong recently briefed residents on a similar three-pronged infection control approach, which does not include any quarantining, or stockpiling.

“There’s no need to stock up with instant noodles, or tin food, or toilet paper” Loong said “We can each do our part. One, observe personal hygiene: wash your hands often, avoid touching your eyes or face unnecessarily. Two, take your own temperature, twice daily. And three, if you’re not well, please avoid crowded places, and see a doctor immediately.”

The World Health Organisation has applauded the country’s approach.

“Yesterday I spoke to Singapore’s Minister of Health and we are very impressed with the efforts they are making to find every case, follow up with contacts, and stop transmission,” WHO Director General Tedros Adhanom Ghebreyesus said at a press conference on Tuesday. “Singapore is leaving no stone unturned, testing every case of influenza-like illness and pneumonia. So far, they have not found evidence of community transmission.”

Adalja said at this point, nearly two full months into the COVID-19 outbreak, that the virus is “not containable” and instead of quarantines, the focus now should be on “hospital preparedness, vaccine development, antiviral clinical trials,” and better diagnostic tests.

“The whole idea of the cruise ship quarantine was ill-conceived, and the resultant slew of infections it spawned was completely predictable,” Adalja said.

In other words, there is a reason that some people call cruise ships “floating petri dishes.”

More than 90% of gastrointestinal issues on board cruises stem from norovirus, but cruise ships also host flu viruses year-round, and the evidence so far suggests they seem to incubate the novel COVID-19 pretty well, too, both because of the cramped quarters where people can pass the virus to each other, and, possibly, through touching surfaces where it’s possible the virus could live on for a matter of hours outside the body.

“Cruise ships are made of surfaces that are really sticky for viruses,” Hills said. “Lots of chrome and polished metal, things with grooves and nicks and scratches. It just makes a good home.”

Remarkably, however, given the cramped conditions below deck, only a few more than a dozen of the crew members aboard the Diamond Princess appear to have gotten sick with COVID-15, according to one tally by Al Jazeera last Thursday. That is a far smaller number than the count of sickened passengers who were staying above deck, which included more than 40 sick Canadians, and more than 50 ill Americans.

That difference, experts suspect, might have a lot to do with one simple move: better handwashing below deck, by members of a very well-trained, and disease-weary cruising crew.