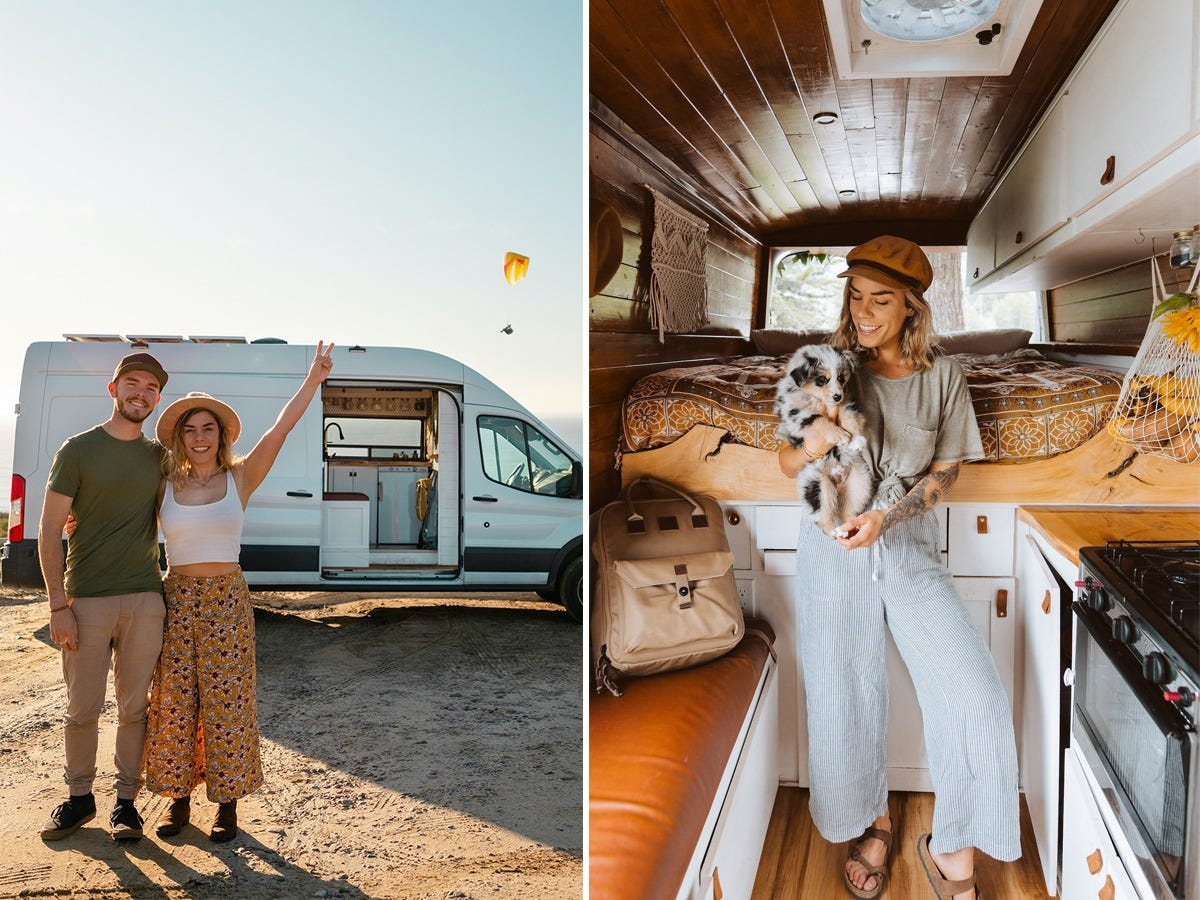 Nikki BiggerNikki Bigger and Ben Waugh live in a van full time with their puppy.

Nikki Bigger has been living tiny since 2015. 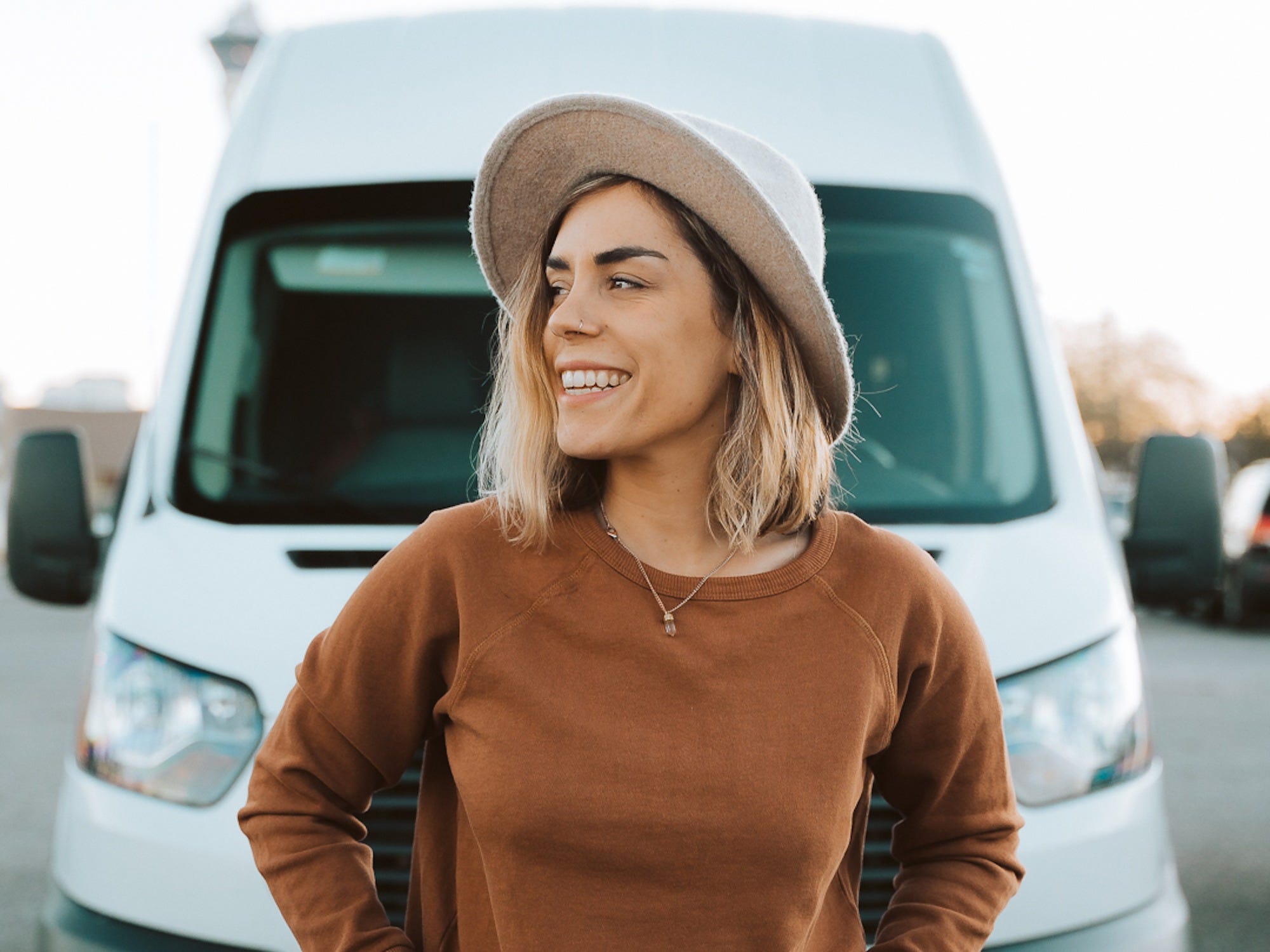 The 29-year-old Canadian photographer got a taste of tiny life while living abroad.

“I flew to New Zealand on a working holiday visa and I bought a van to live in. I was in it for two years,” Bigger told Insider.

After a few years of travelling, Bigger couldn’t get the van life out of her head. 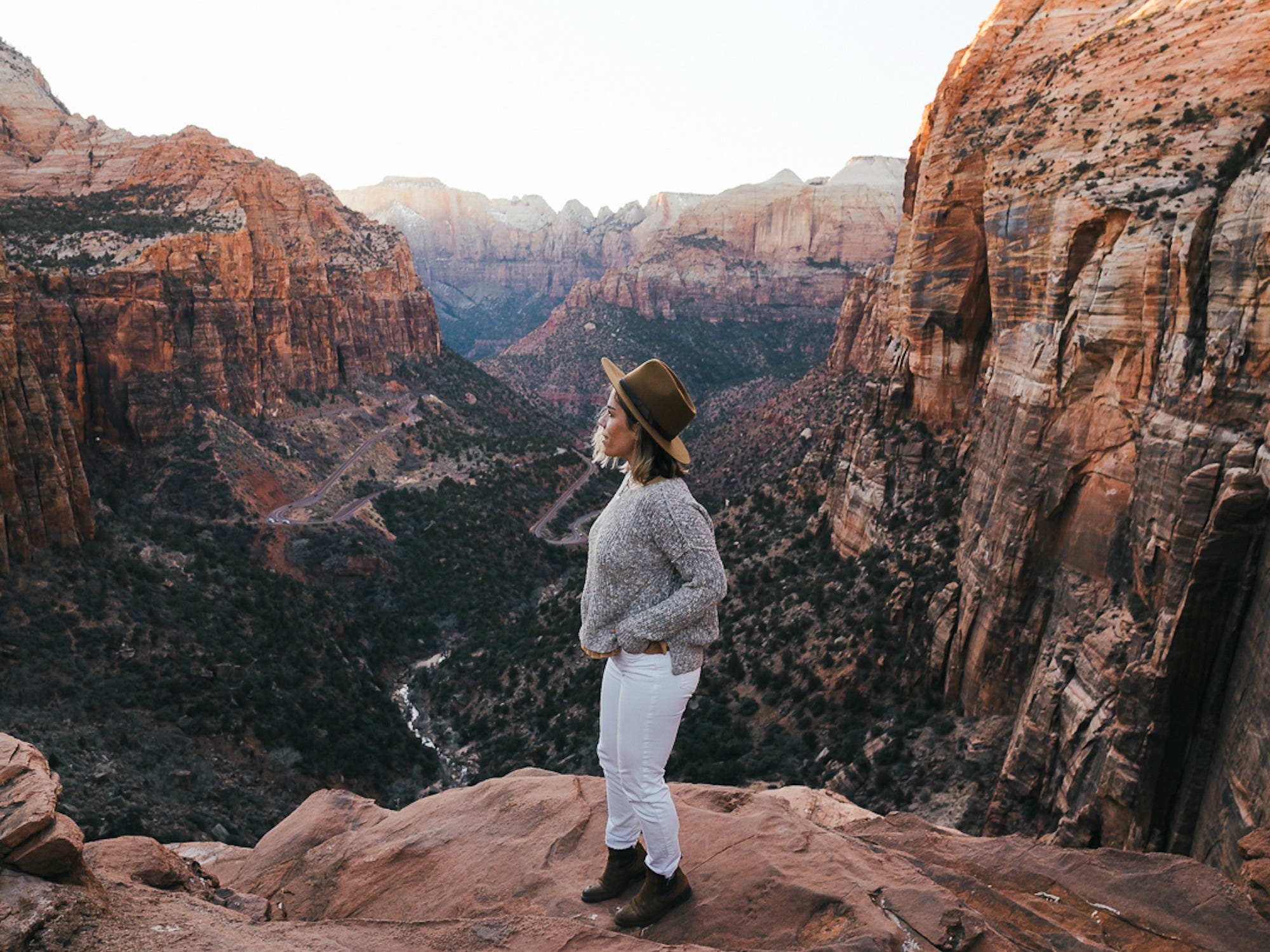 Nikki BiggerBigger decided to buy her own van.

While travelling between 2017 and 2019, Bigger said she realised she wanted to return to the nomadic van lifestyle.

“When I came back to Canada, I just knew that that’s the life I still wanted to live,” she said. 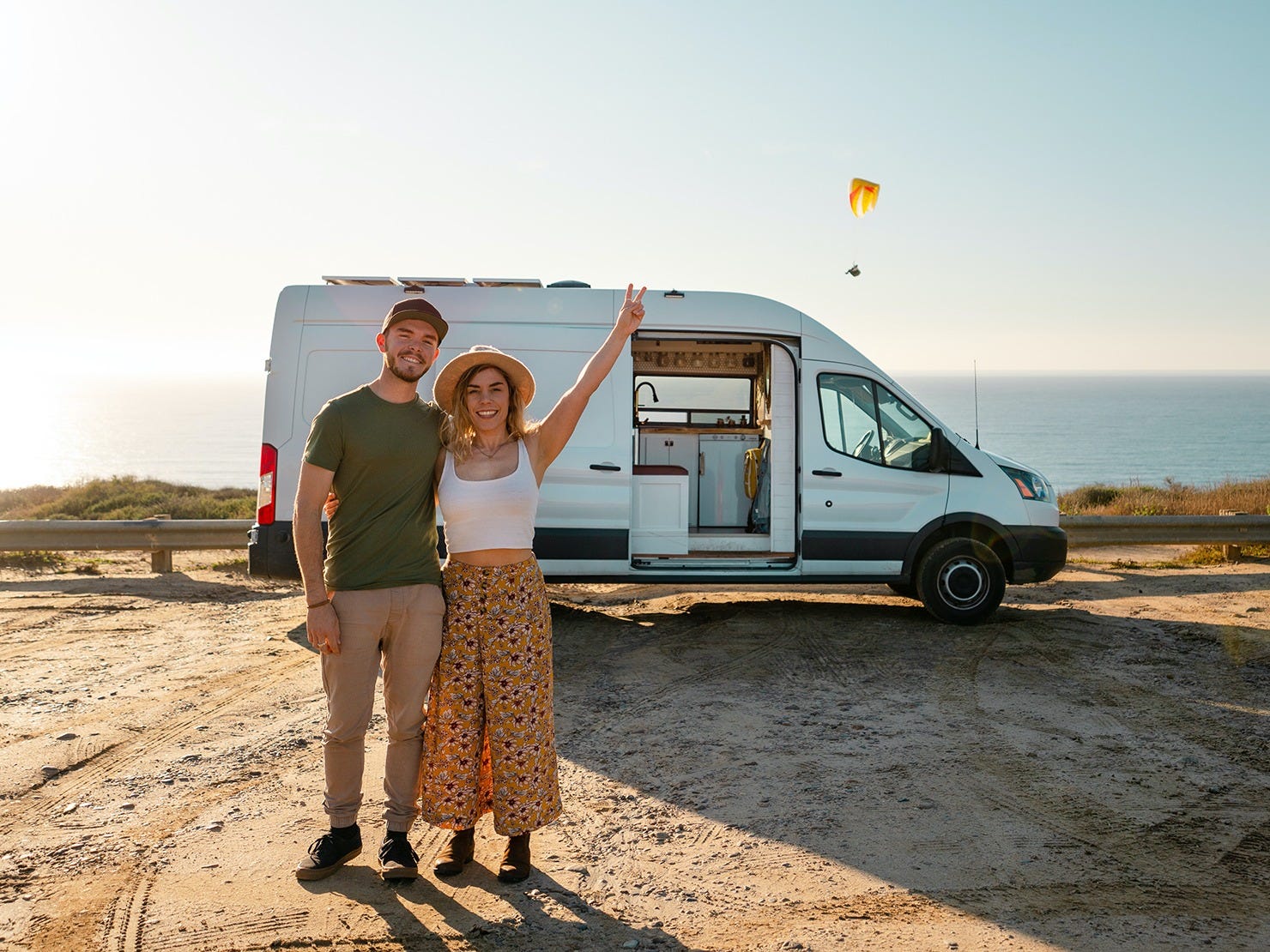 Nikki BiggerBigger renovated her van herself.

Bigger’s brother and dad helped her remodel the van to fit her needs.

When it was finished, she and Waugh hit the road. They have been travelling together ever since.

The couple also shares the van with their puppy, Salem. 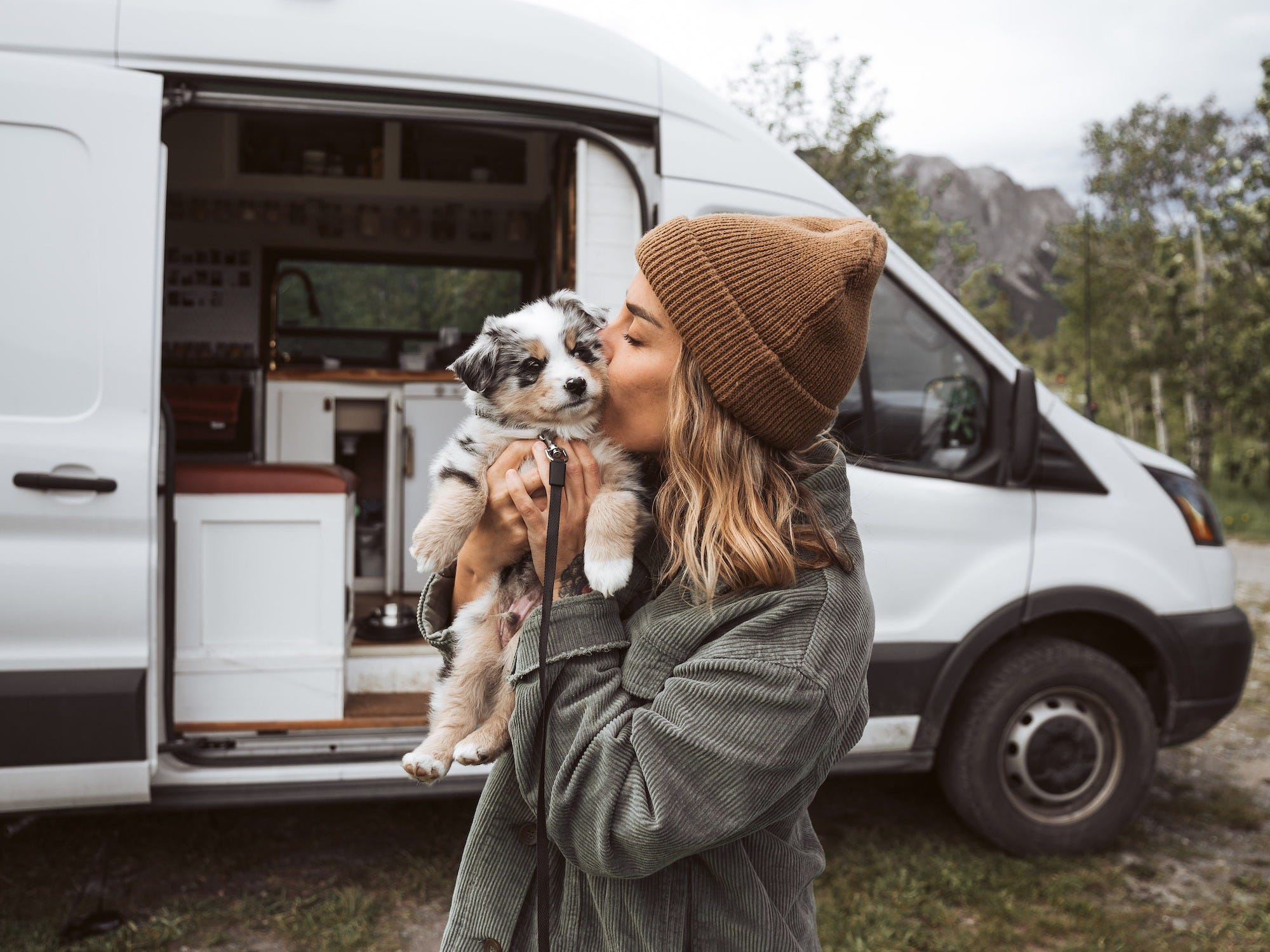 Nikki BiggerThe couple has a puppy.

The couple has had Salem since mid-June.

The van’s interior has a kitchen and living space, and Bigger decorated it with chic, rustic touches. 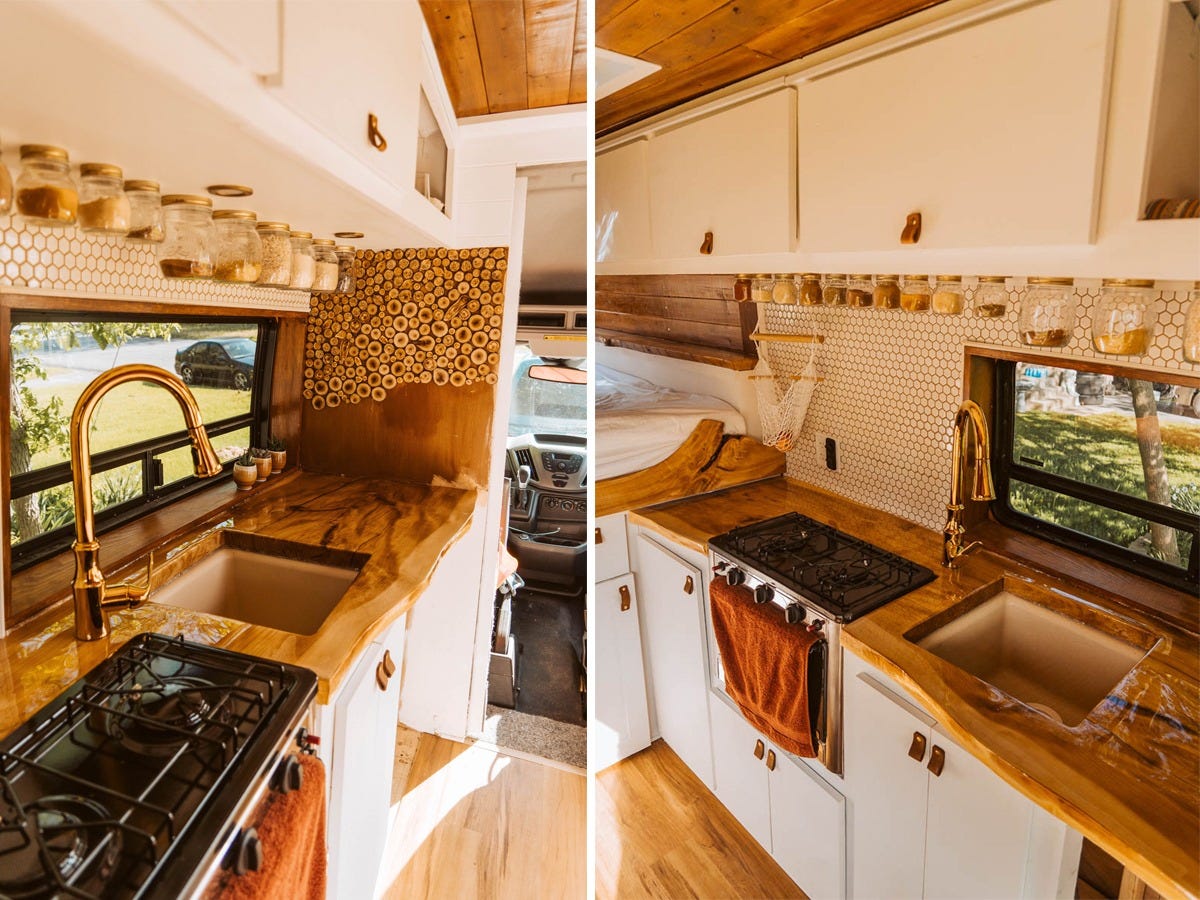 The front of the van features a kitchen and living space.

“It has a bunch of jars and a bunch of overhead storage for the kitchen,” Bigger said of her kitchen. “I have an oven and a stove that’s connected and a bunch of storage underneath the counter.”

The kitchen is complete with a refrigerator, as well as a water pump and faucet. The gold faucet ties in with the gold of the jars and the wood on the counters and wall.

One of Bigger’s favourite parts about the kitchen is the unique wood-chip countertop.

The couple’s bed sits at the back of the van. 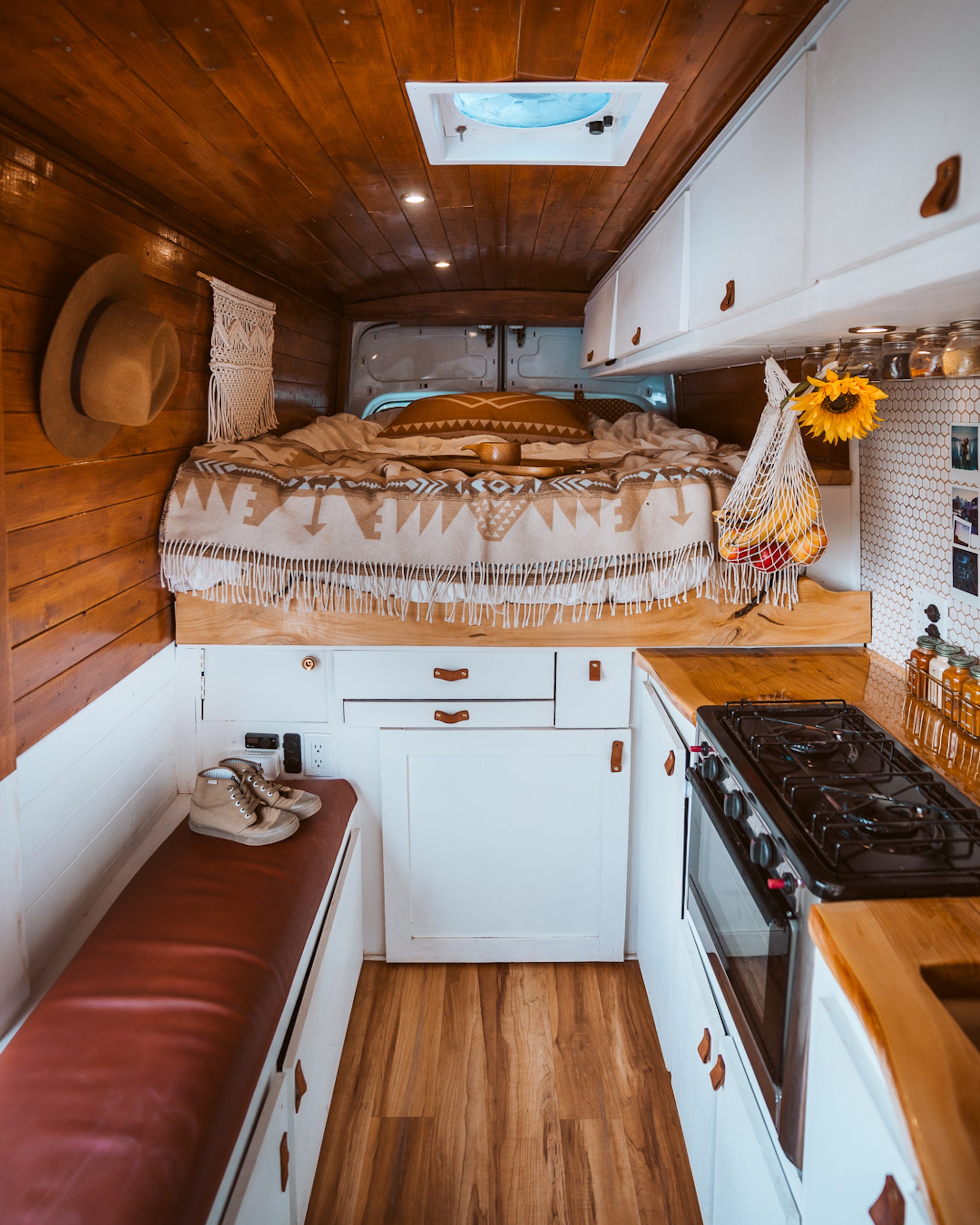 The bed also has cubbies underneath and above it where the couple stores their clothes. In addition, the van has storage underneath it that can stow items like bikes, clothing bins, and car equipment.

The back of the van opens up so the couple can enjoy the views as they travel. 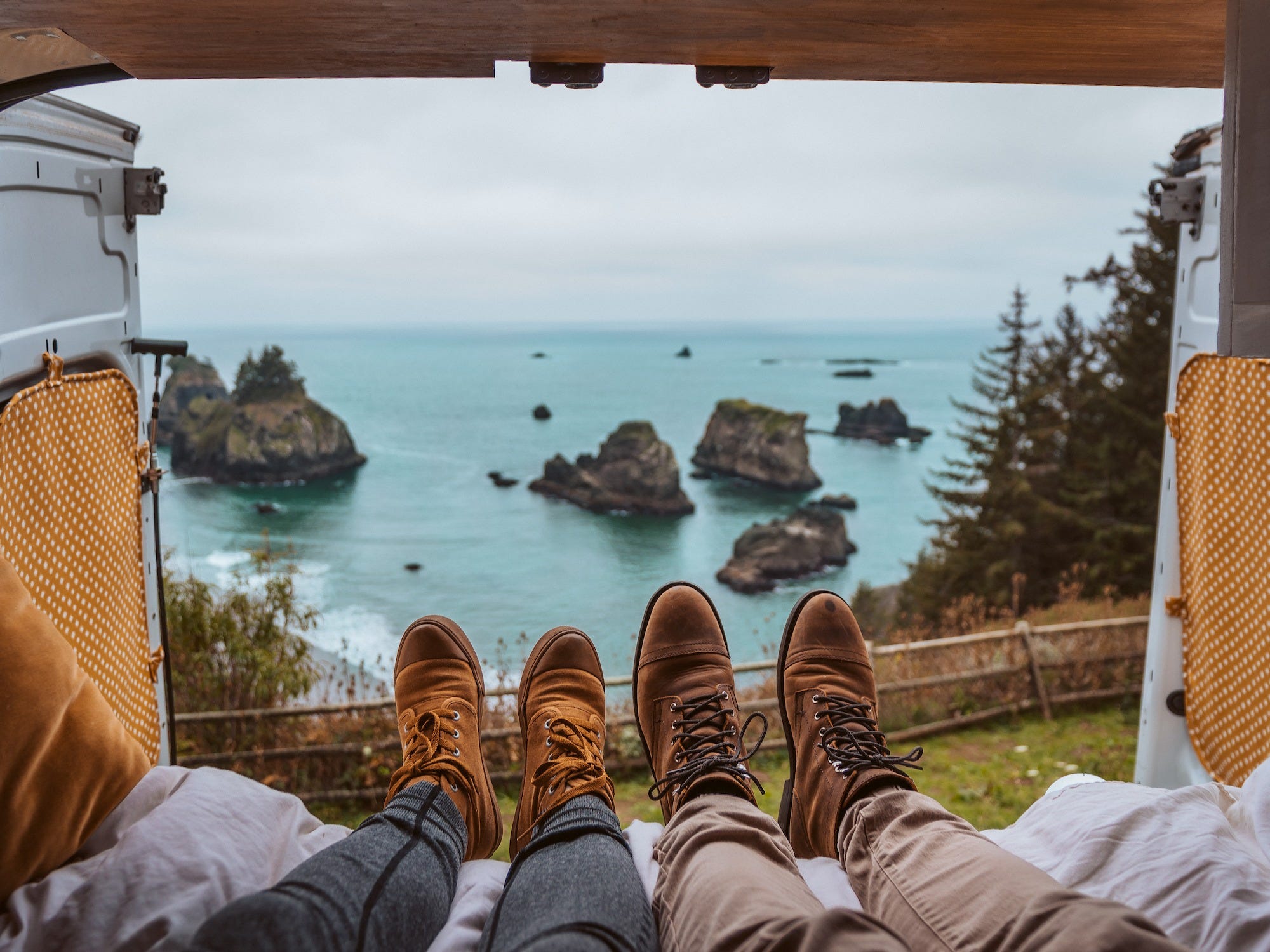 Bigger describes her decor style as a chic, rustic cabin with a modern twist.

The couple has a composting toilet in the van that pulls out of a drawer. 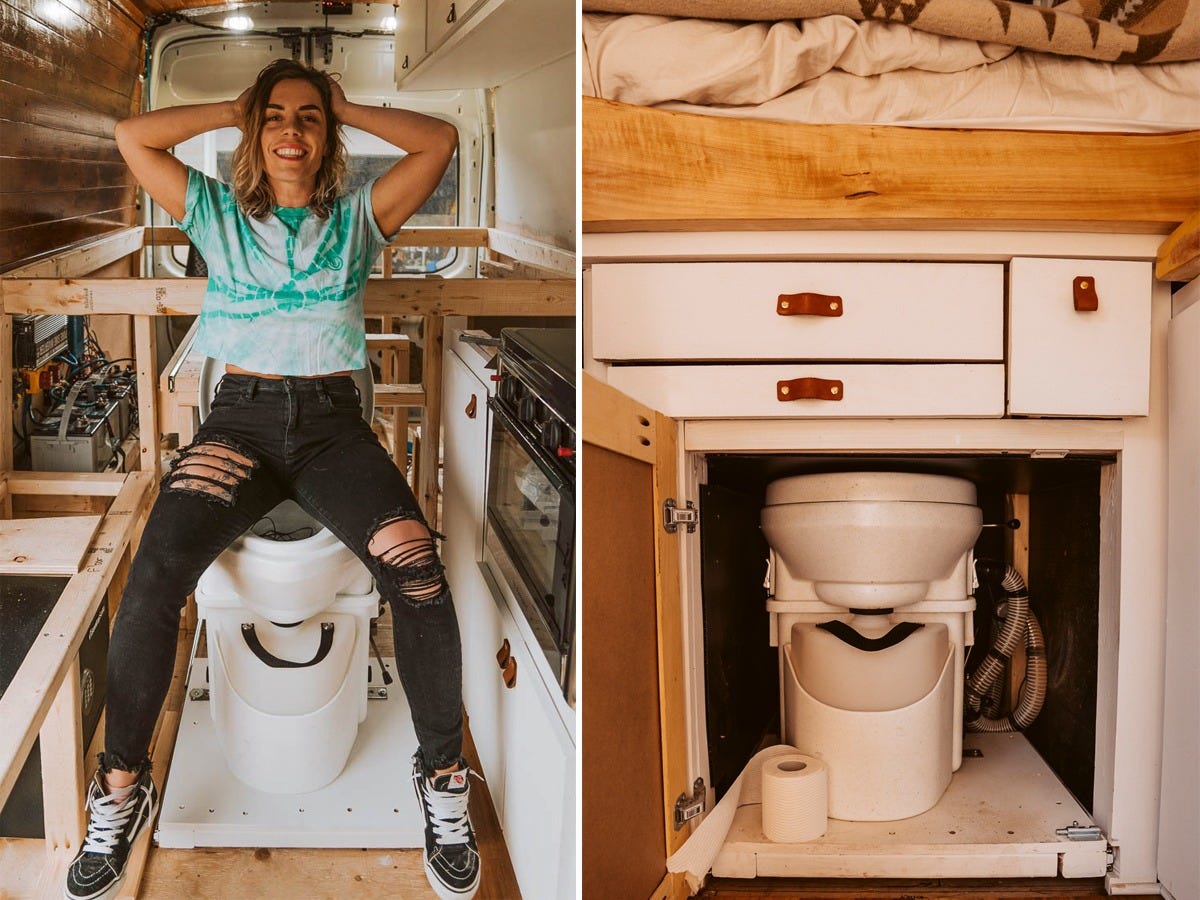 There’s no private room for the toilet, but it’s still convenient for the couple to have one in the van as it means they don’t have to worry about using public bathrooms as they travel.

Bigger said the toilet is what surprises people most about the van.

“Every time someone’s never seen it before, they are always amazed that we have a toilet, which is funny,” she said.

The couple also has an outdoor shower at the back of the van. 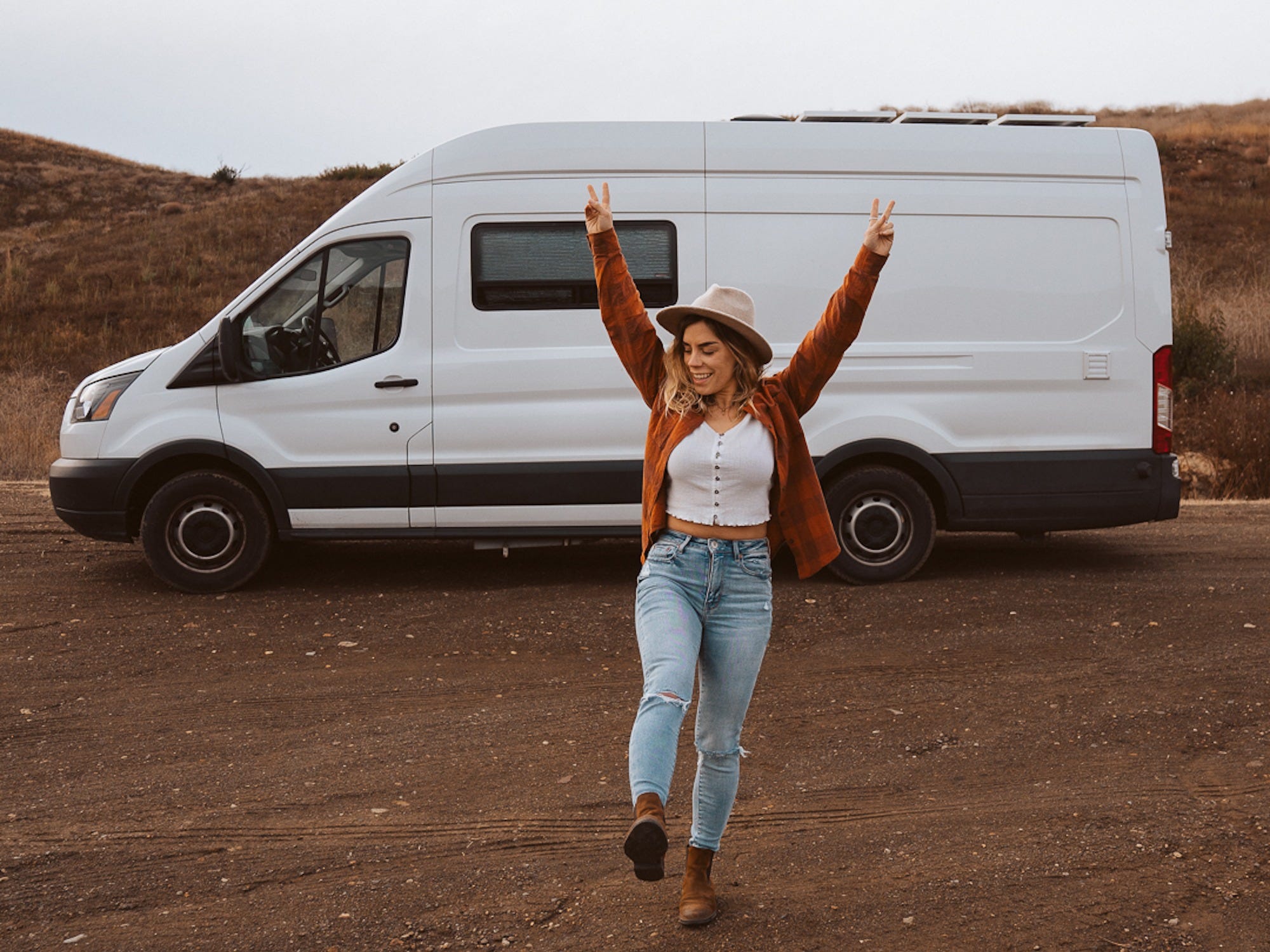 Nikki BiggerThey have an outdoor shower.

“We can only do outside showers,” Bigger said.

That being said, the shower is heated, which adds a luxury of home to life on the road.

Every inch of the van is maximized for storage. 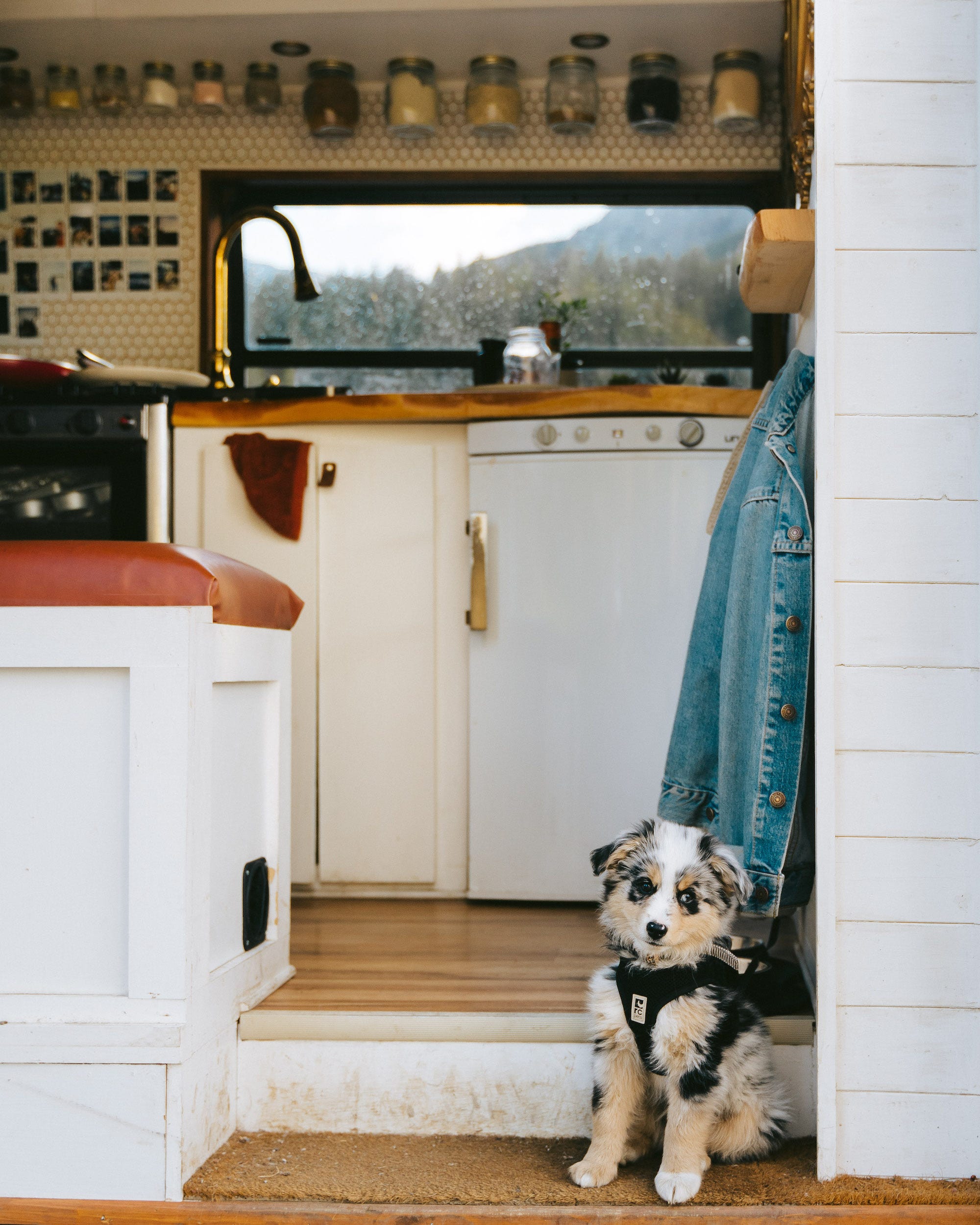 Nikki BiggerThe van has a lot of storage.

The bed has storage underneath it, and the couple hangs their shoes on hooks to make room for a heater.

Bigger told Insider that her favourite thing about her nomadic lifestyle is the “freedom to go anywhere and to have everything with you.” 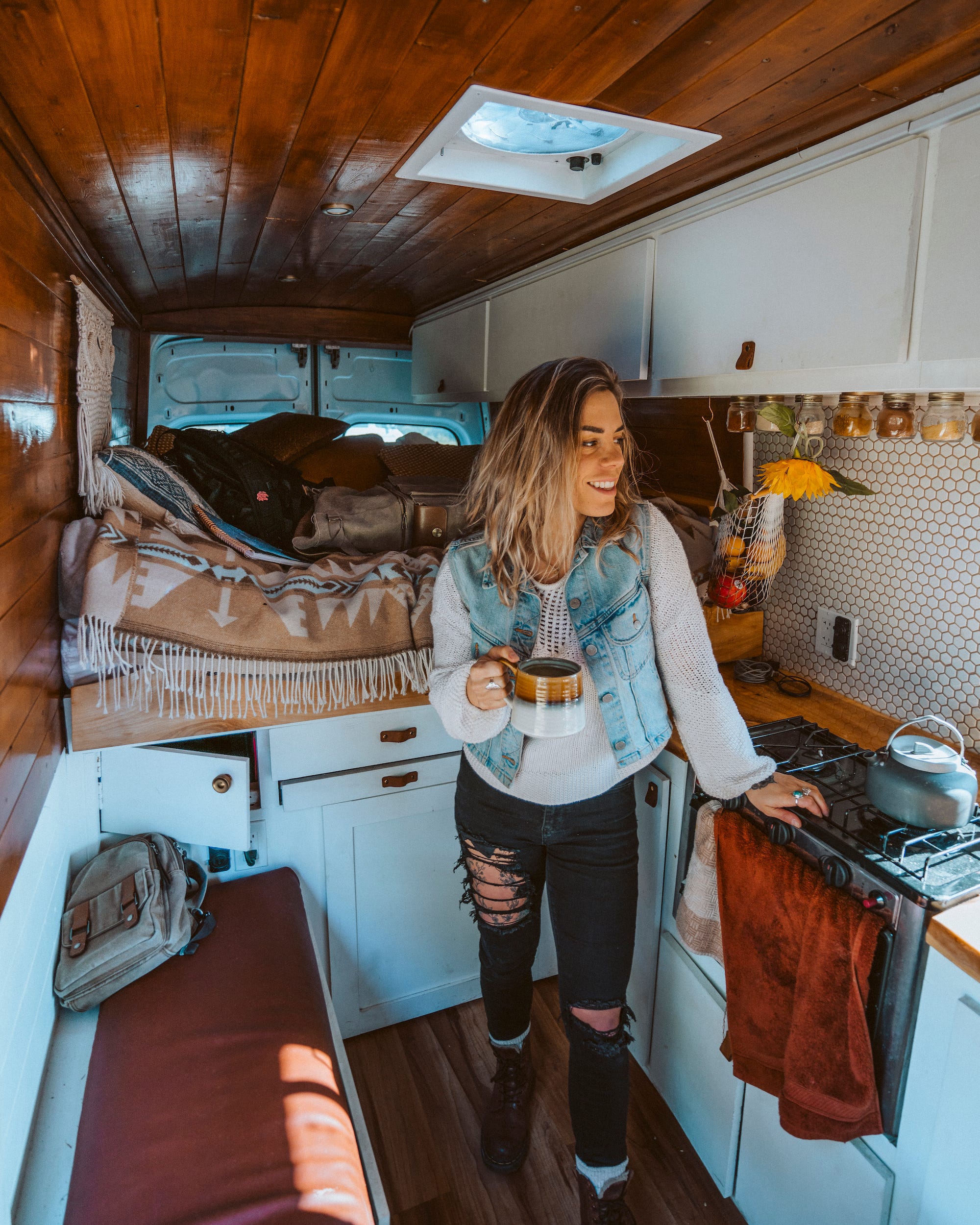 But she said that the financial benefits of her lifestyle are also why she is drawn to van life.

“Our monthly expenses are so low that we don’t actually have to work a 40-hour week,” she said, adding that they typically only work around 15 to 20 hours a week.

“I think the financial aspect is amazing, and that should be an incentive for anyone to do it,” Bigger said of the nomadic lifestyle. 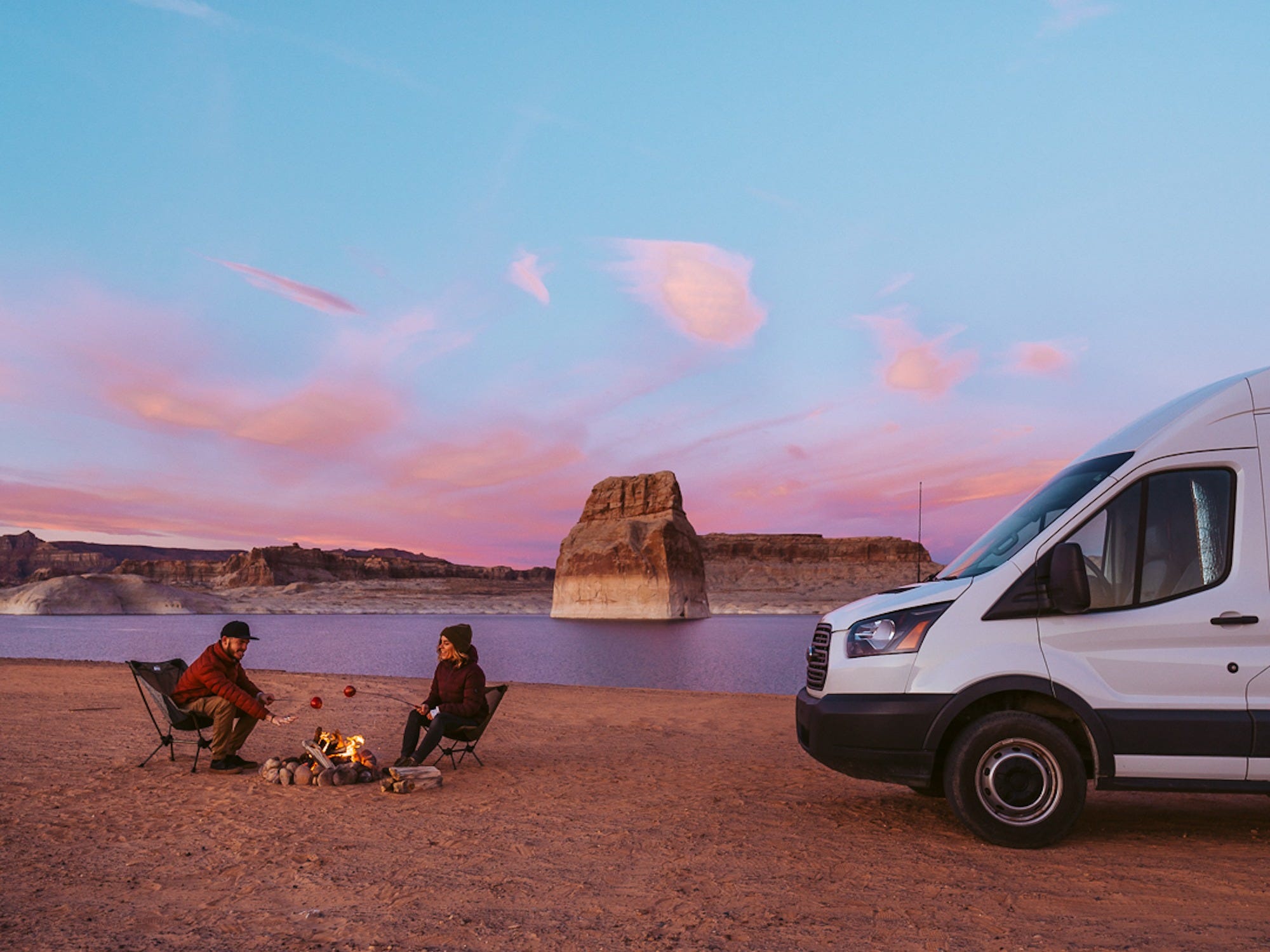 Bigger said that she and Waugh also consciously make choices to help them mitigate their costs.

The vehicle’s appearance also allows for flexibility in where the couple can park it, which can help save money, Bigger said.

“My van looks so much like a cargo van that you can park beside someone’s house,” she said.

Van life makes for challenges, too, such as raising a puppy on the road. 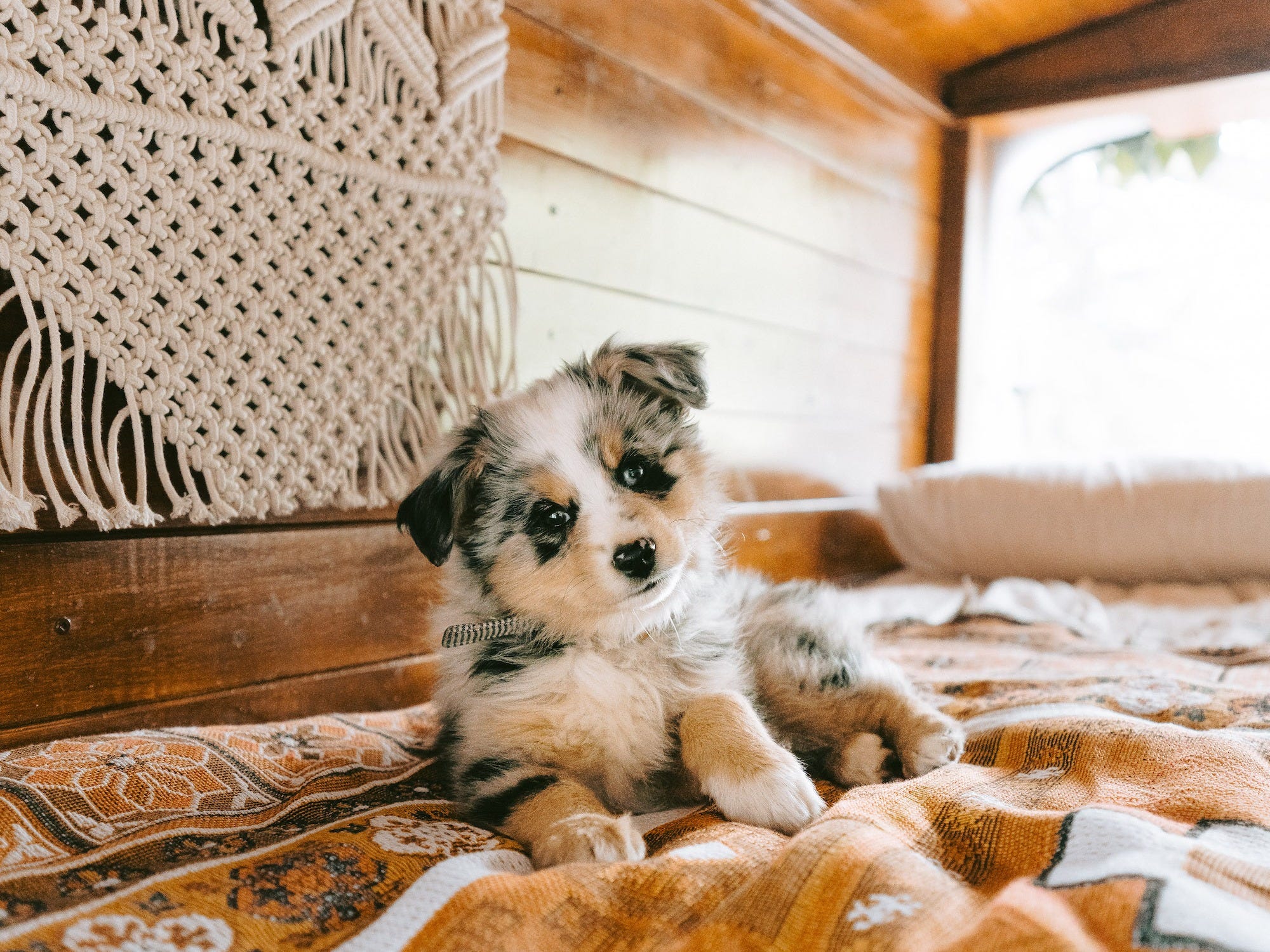 Nikki BiggerThe couple is training their puppy on the road.

Bigger lived in the van with a dog before, but Salem is her first van puppy.

“We were just nervous about training a puppy in the van,” Bigger said. “But when we got him, he was basically potty-trained.”

“He is amazing,” she added. “It has been really good, and he’s OK in the van. And we always bring him on adventures.”

Not having a permanent address can also be challenging when it comes to Bigger and Waugh’s work. 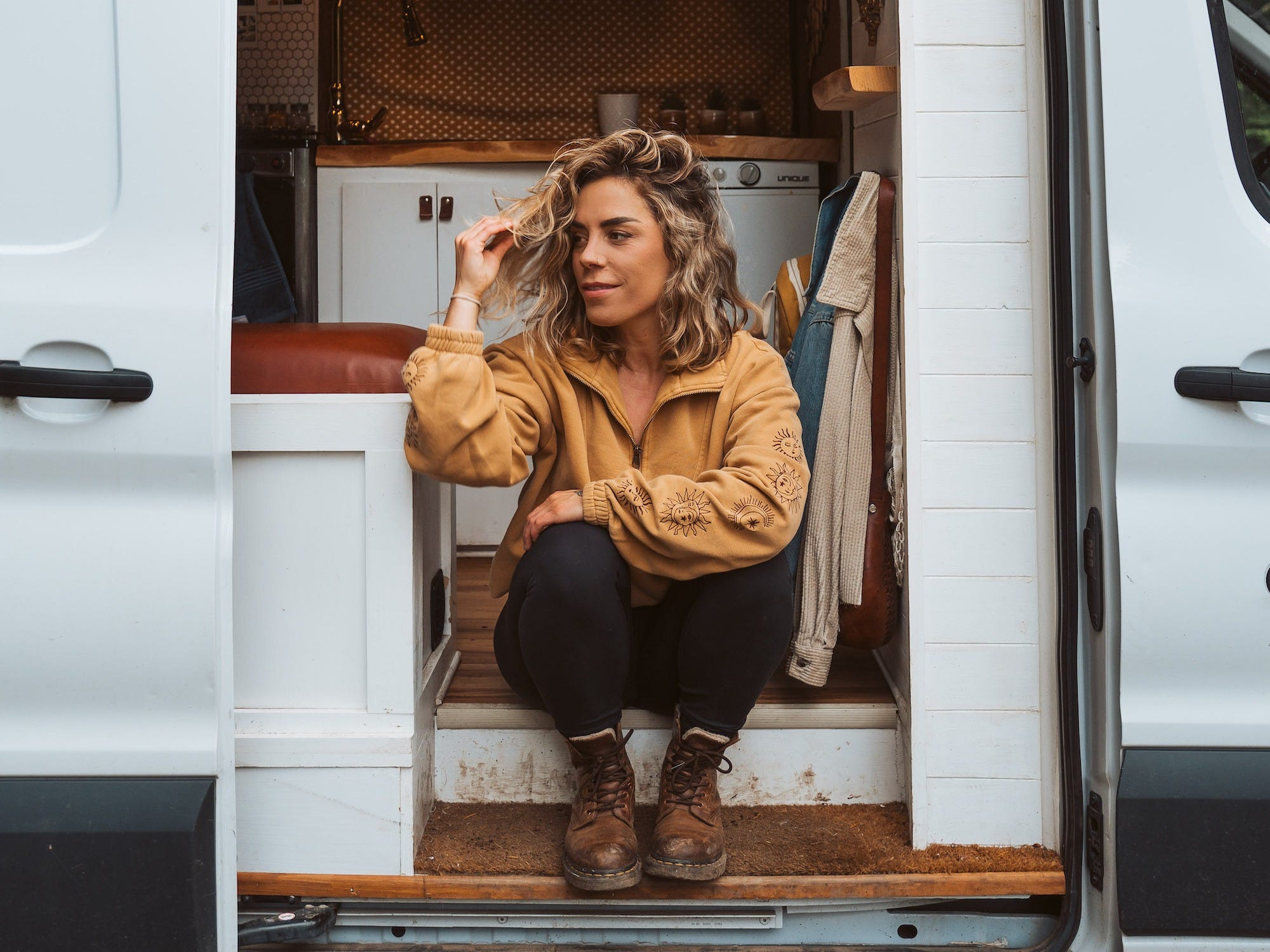 Nikki BiggerLife on the road can make work difficult.

Bigger and Waugh are both commercial photographers, and they often have to send prints.

She also said they sometimes miss being in a more permanent house.

“Right now, we’re kind of in a phase where if we did rent a house for one month just to get it out of our system, it’d be really nice,” she said. “Sometimes we really miss having a desk and a quiet space.”

“It would be sweet one month per year to live in a house just to remember how boring it is, basically,” Bigger said.

But Bigger said that being able to live in a tiny space with her partner has given her a lot of confidence in her relationship. 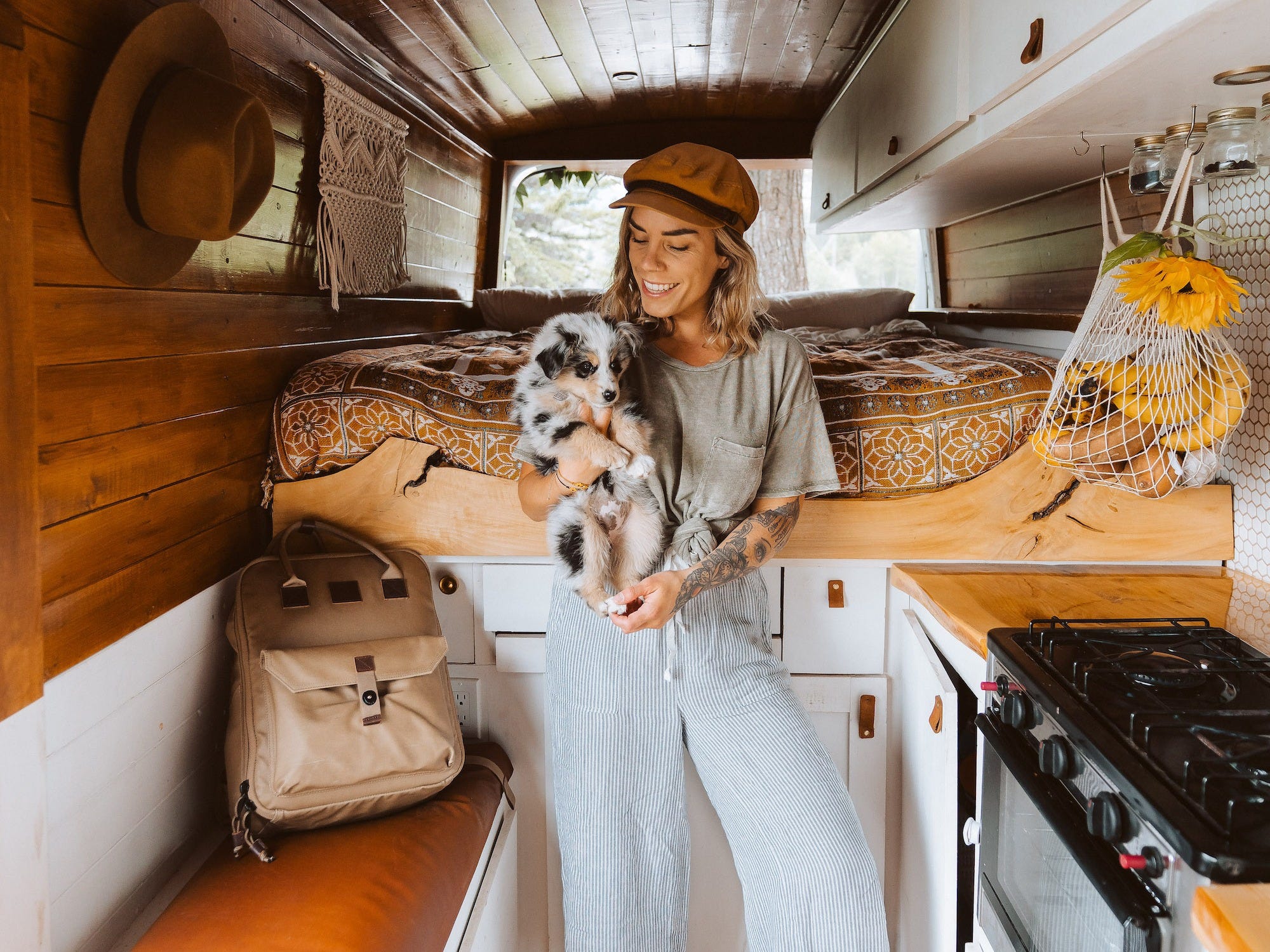 Nikki BiggerBigger and Waugh spend all their time together.

Since Bigger and Waugh are both photographers, they often work side by side.

“It is possible with someone that you love,” she added. “It takes a lot of work. I would definitely say it’s the ultimate relationship test.”

“Anyone can do this,” Bigger said of van life. 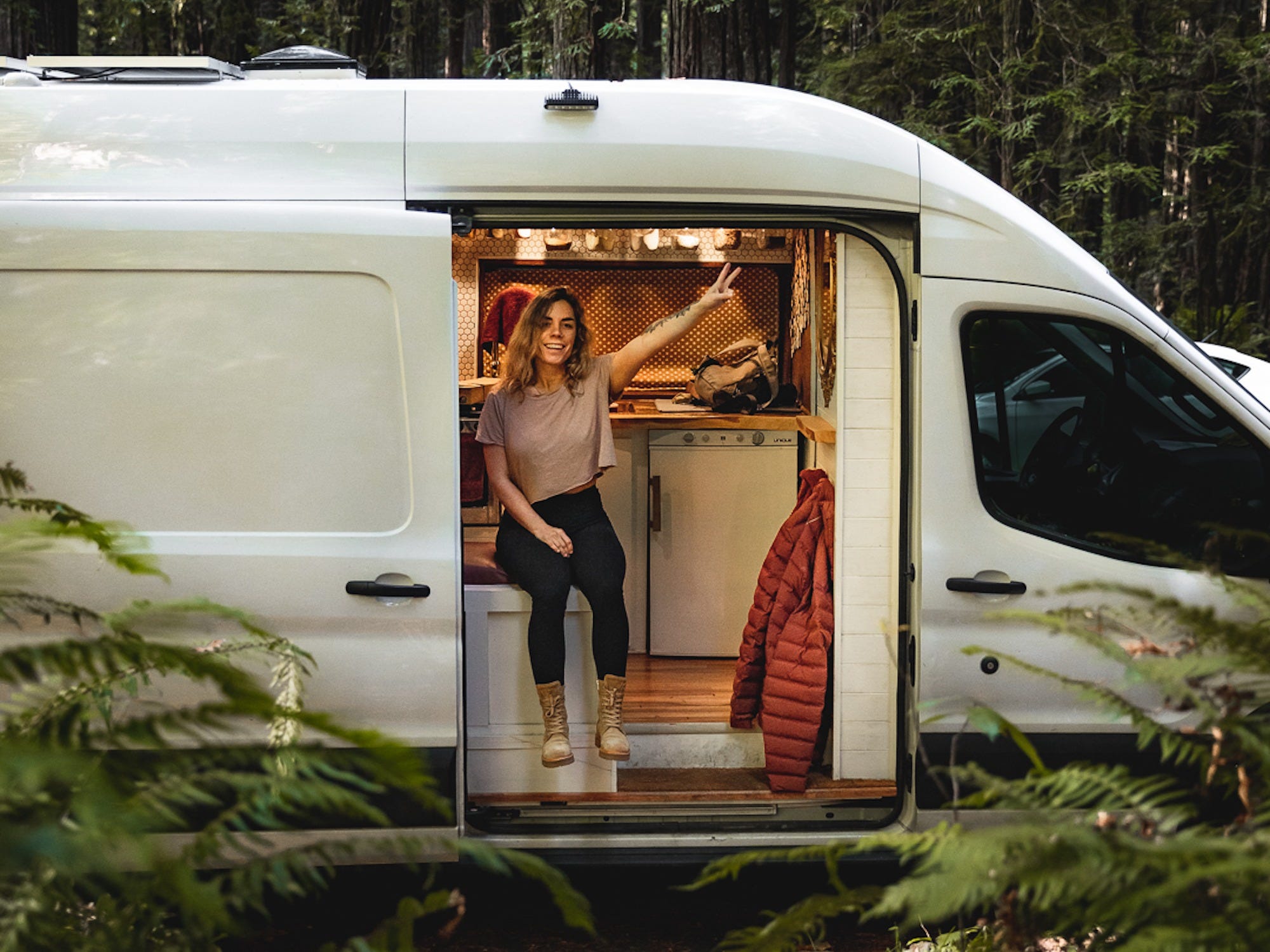 “It’s not as hard as most people think,” she said. “Once you do it, you will save that $US1,000 on rent every month, so you’re actually doing yourself a favour.”