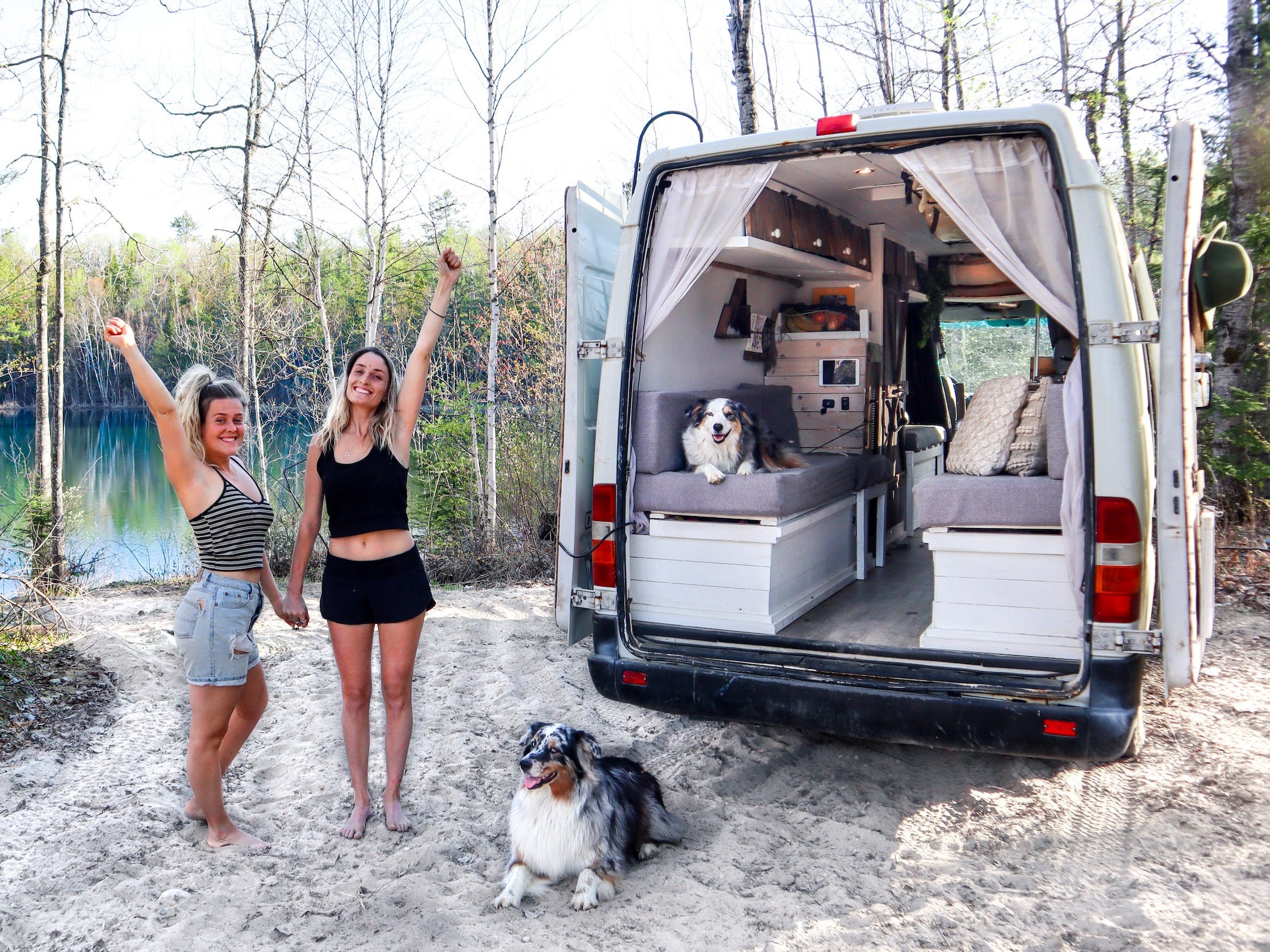 Van WivesCrystal Drinkwalter and Jazmyn Canning had to leave Guatemala in their van because of the coronavirus.

Crystal Drinkwalter and Jazmyn Canning started dreaming of living a nomadic lifestyle in 2018. 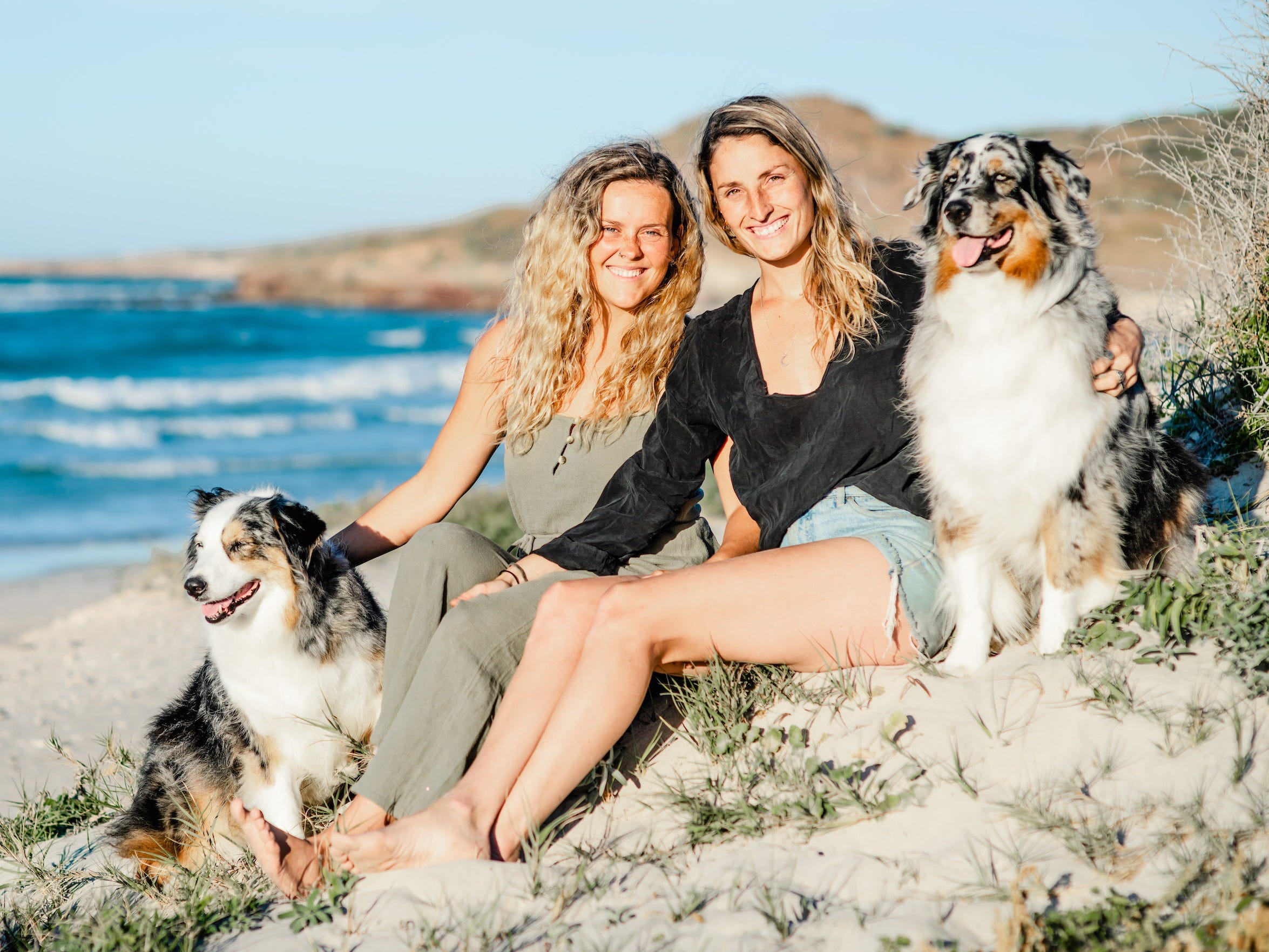 SWNSCrystal Drinkwalter and Jazmyn Canning live in a van with their dogs full-time.

“We’ve always been travellers,” Drinkwalter, 25, said of herself and her wife, who is 26.

“This just seemed like more of a long-term way of travelling,” she added. “We can travel with our dogs, and we could go for longer and see more, stay as long as we’d like, go off the beaten path. That really drove us to get into van life.”

In 2018, the couple bought a sprinter van with the intention of living in it year-round. 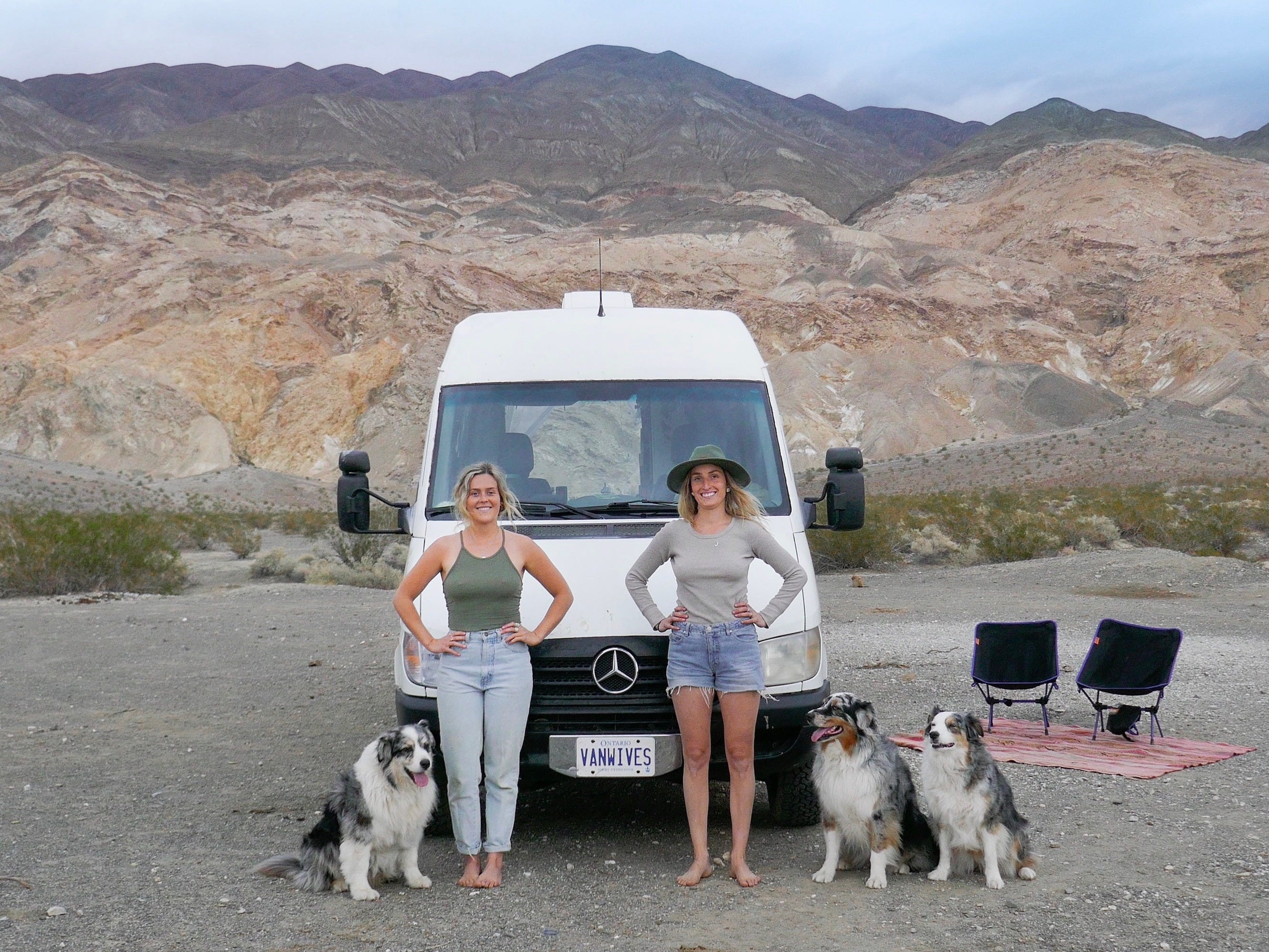 SWNSDrinkwalter and Canning bought their van in 2018.

They bought the van in May 2018, and they decided to remodel it themselves to fit their needs – and the needs of their dogs, Izzy and Bella.

“We built the whole van around them,” Drinkwalter told Insider of their dogs. “We had to put a lot of thought into it because we knew we were bringing both of them and we wanted them to be comfortable first.”

Drinkwalter and Canning did the remodel completely on their own. 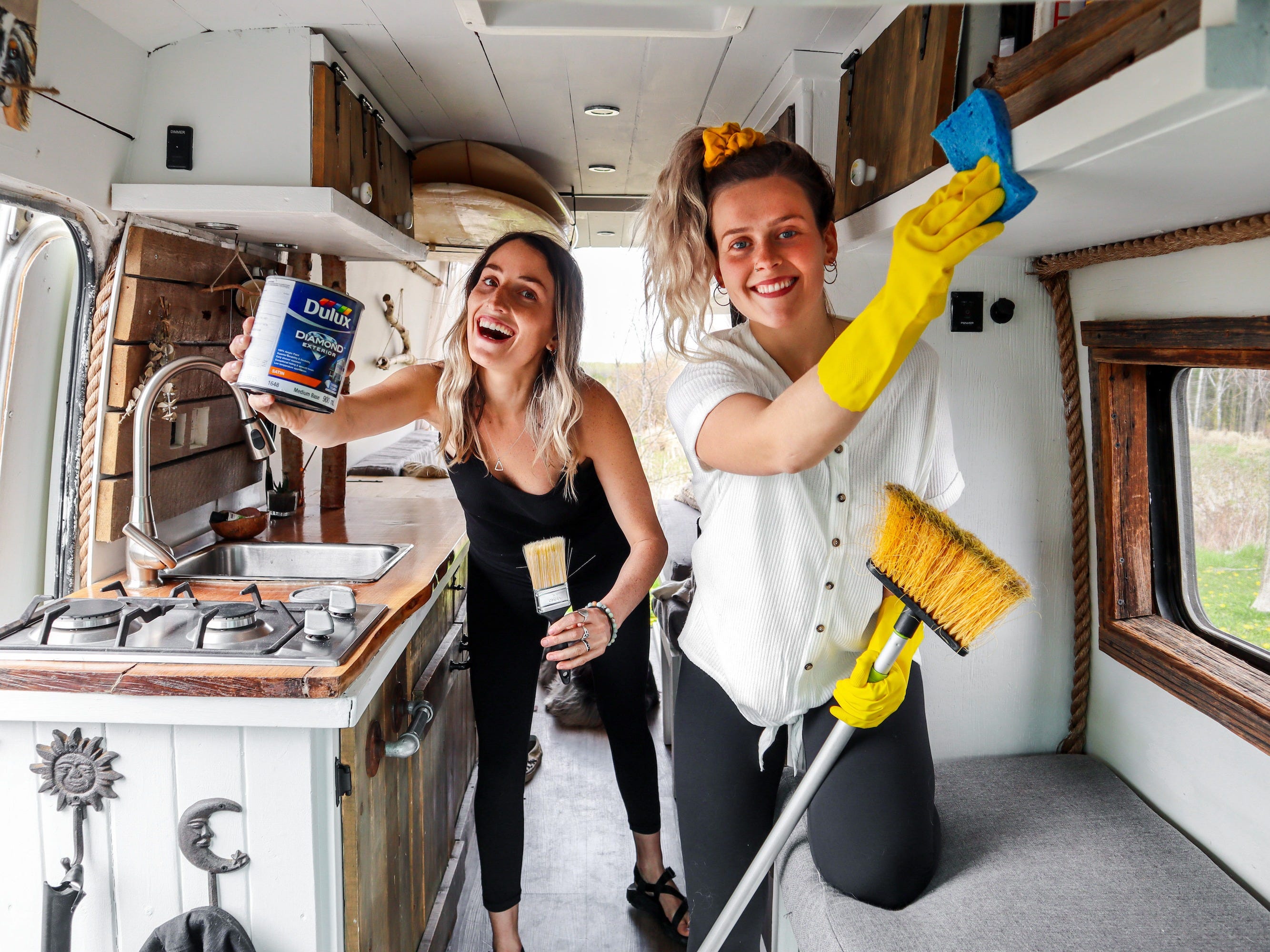 SWNSTheir van was a DIY project.

“We did all of the interior ourselves, including all of the plumbing and the electrical,” Drinkwalter told Insider.

They also take care of the vehicle on their own. “We do a lot of the mechanical work ourselves,” Drinkwalter said. “We’ve learned to work on the van, and we do our oil changes and change our sensors.”

After about nine months of work, the van was ready to be the couple’s full-time home.

SWNSThey have been travelling since January 2019.

They set off on their journey in January 2019, travelling from their home in Ontario to the US before heading even farther south.

“We got the idea that we still wanted to continue south and that we would have an end goal of Argentina, and we would go as far as we can,” Drinkwalter said. “So we went into the States and we did the whole West Coast, as well as Nevada and Utah.”

They then headed to Mexico, where they stayed for three months, before making their way to Guatemala.

The van is mostly one big space, with each area being used to its full potential. 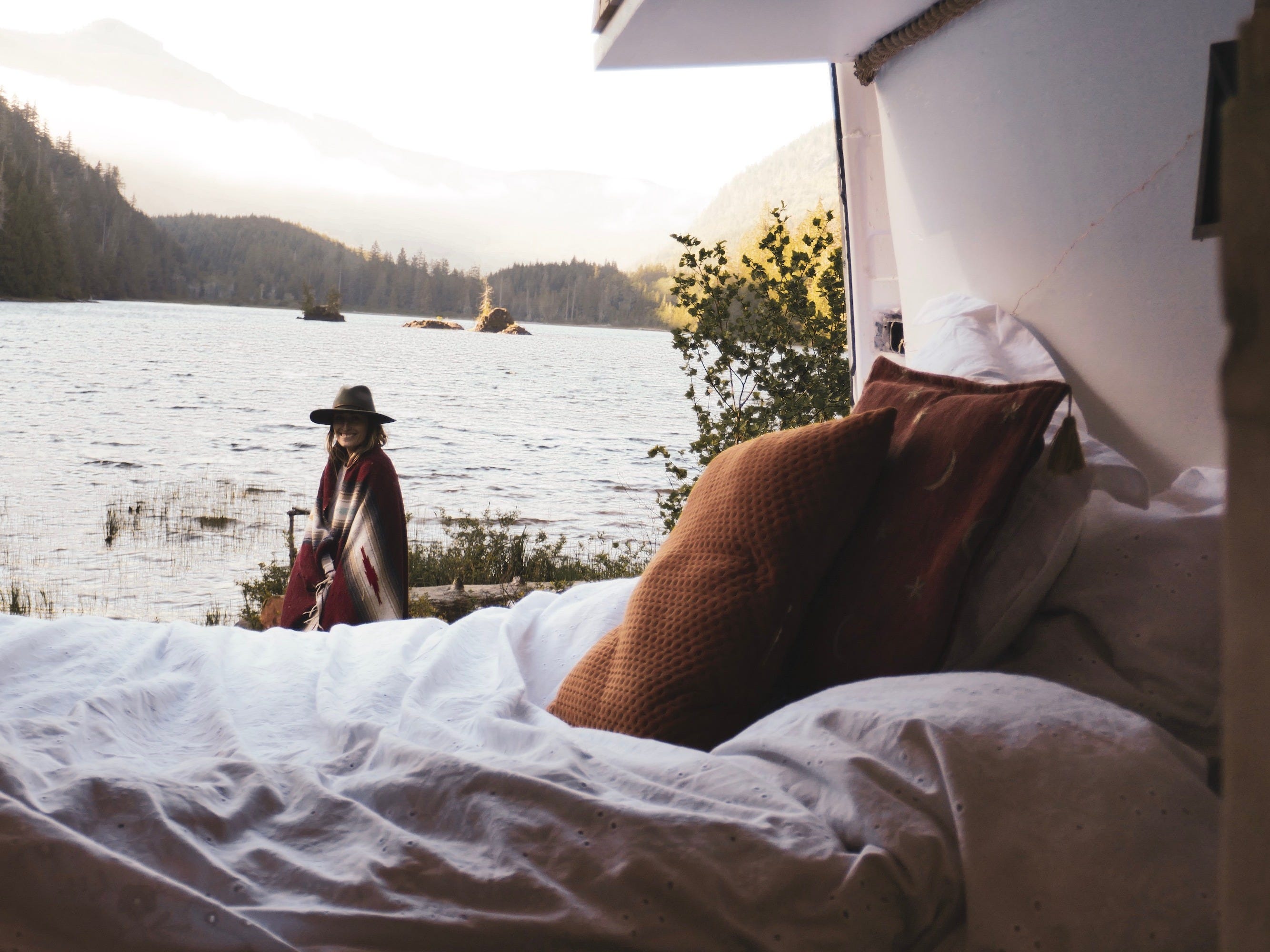 SWNSThe view from the back of the van.

“If you were to open the back doors of the van, we’ve got our two benches that transform into our bed,” Drinkwalter gave as an example.

“In those benches, we have a ton of storage and that’s also where we have our electrical materials, like batteries and our fuse box, so all of the stuff that gives us light and energy,” she said.

The van has a kitchen that features running water, a stove, and a refrigerator. 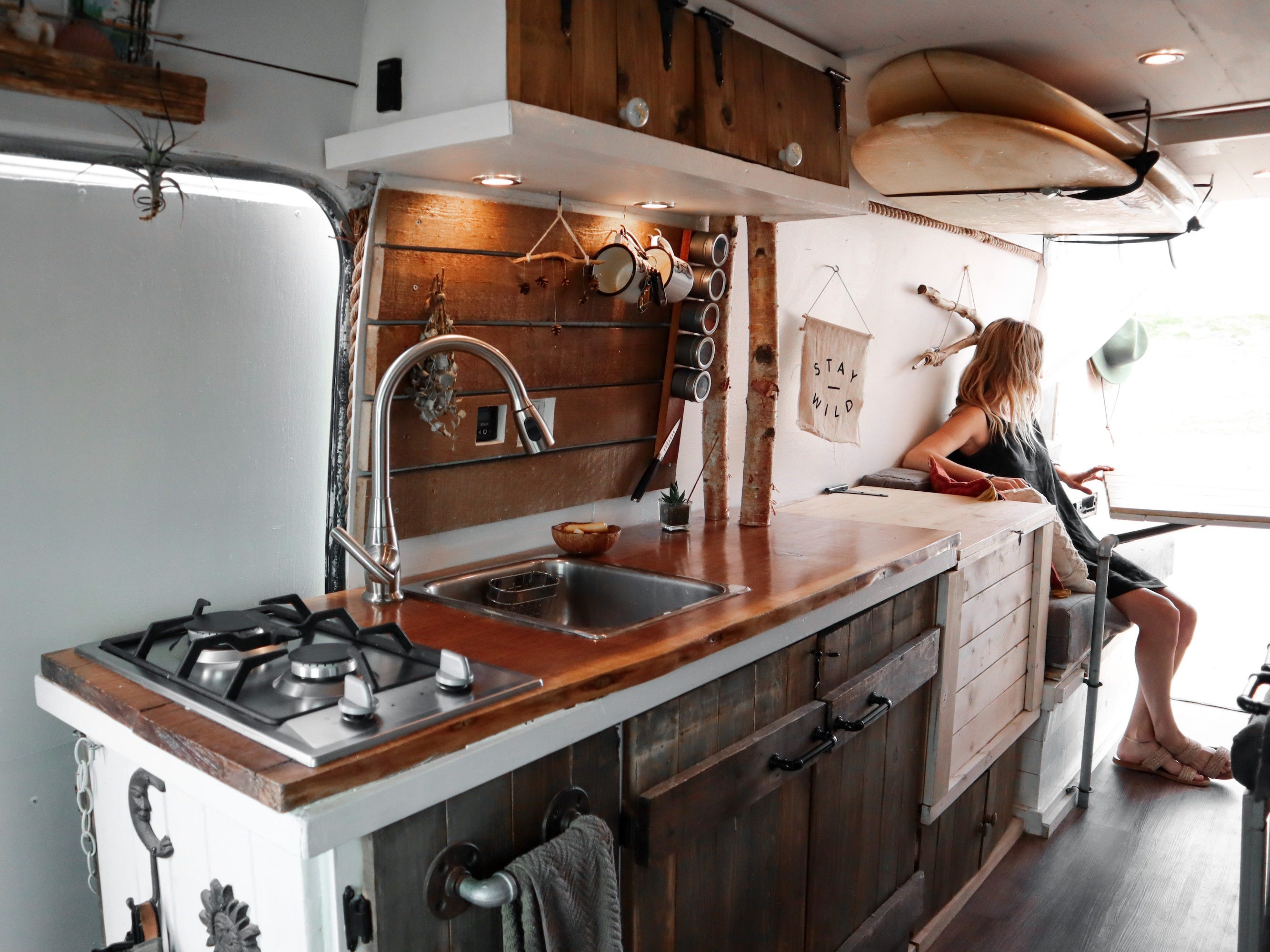 SWNSThe van has a small kitchen.

The stove has two burners, and Drinkwalter said the refrigerator was crucial to the build as it would allow the couple to stay on the road for longer periods of time.

The van can hold 127 litres of water, allowing Drinkwalter and Canning to go for miles without having to refill.

A large pantry also sits across from the kitchen. 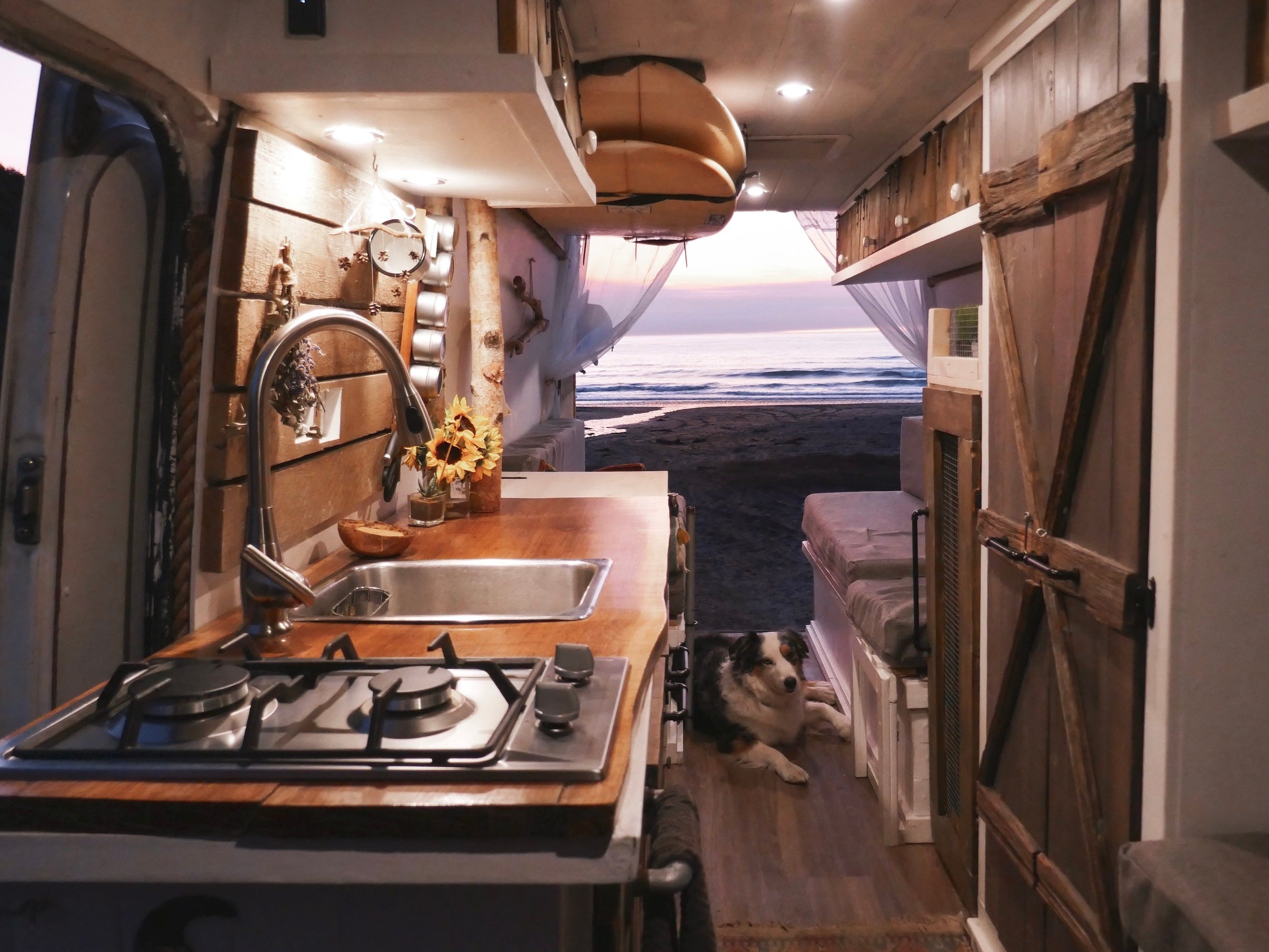 SWNSThe van has plenty of storage.

“We have a little fruit basket with a storage stand underneath,” Drinkwalter said, adding that a closet next to the basket acts as their pantry.

“It’s a floor-to-ceiling pantry, so it’s where we store all of our food, extra water, dog food, plates, and all that kind of stuff,” she said.

The van doesn’t have a bathroom. 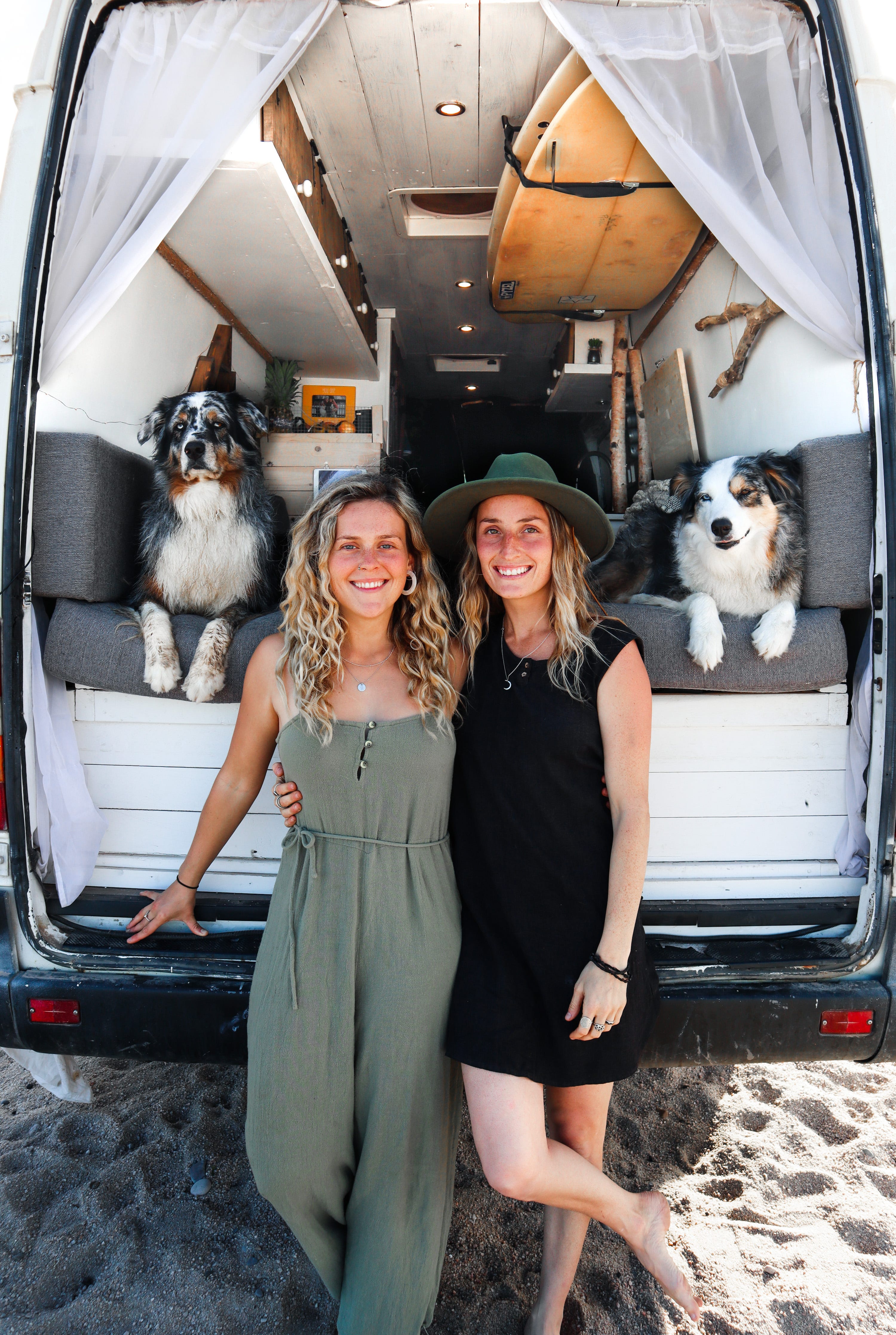 SWNSThey don’t have a bathroom in the van.

The couple is typically off-grid as they travel, so public restrooms aren’t really an option.

“We usually use the no trace method with a shovel,” Drinkwalter said of how they deal with their waste.

They also keep a solar shower with them in the van to stay clean.

The pair was in Guatemala when the coronavirus pandemic hit the US and Canada. 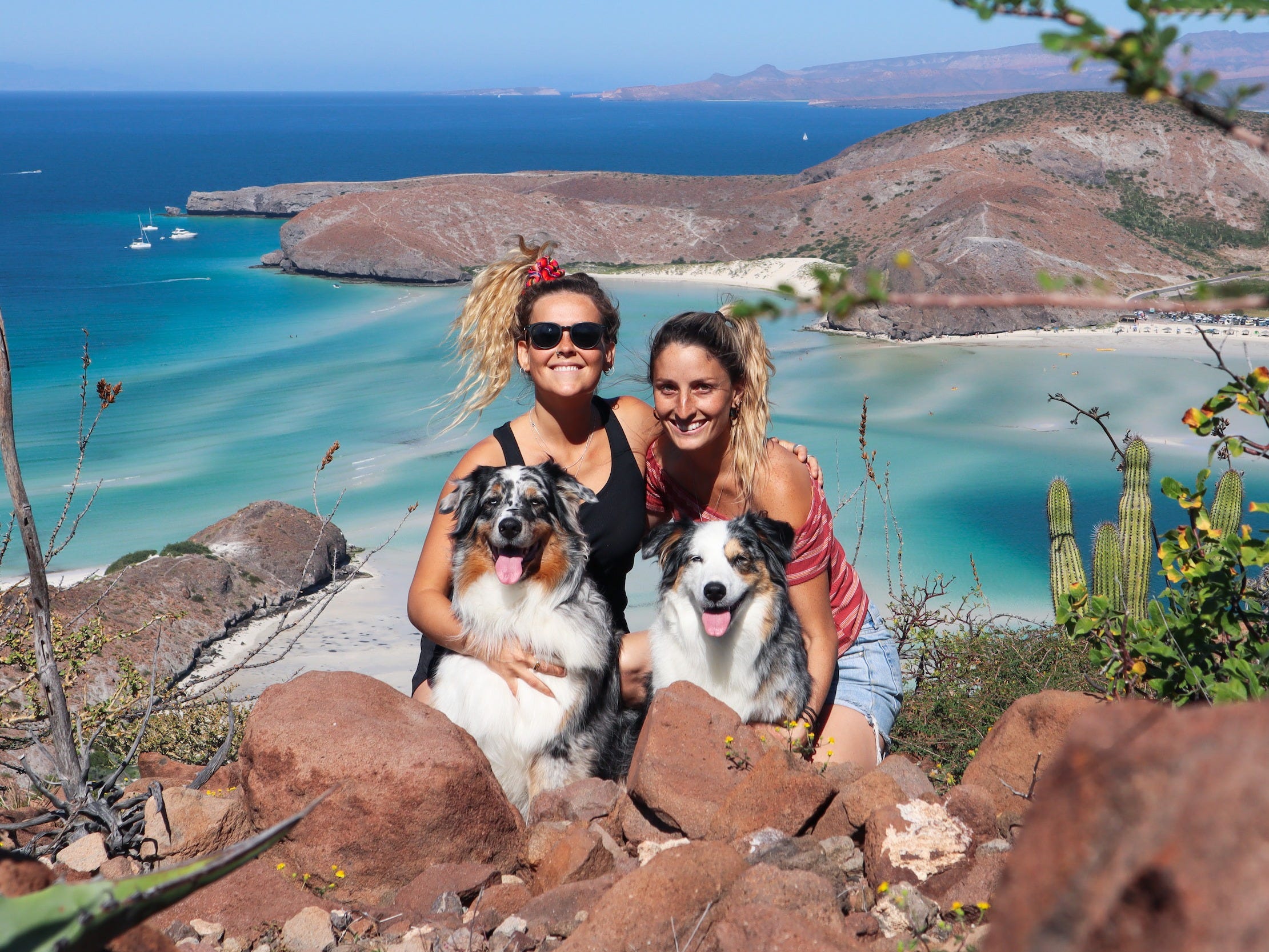 SWNSThey were in Guatemala in March.

“We had only been in Guatemala for just a few weeks before COVID-19 had hit,” Drinkwalter said.

They first started hearing whispers of the virus as they crossed the border from Mexico to Guatemala.

At the beginning of the pandemic, Drinkwalter and Canning wanted to keep travelling. 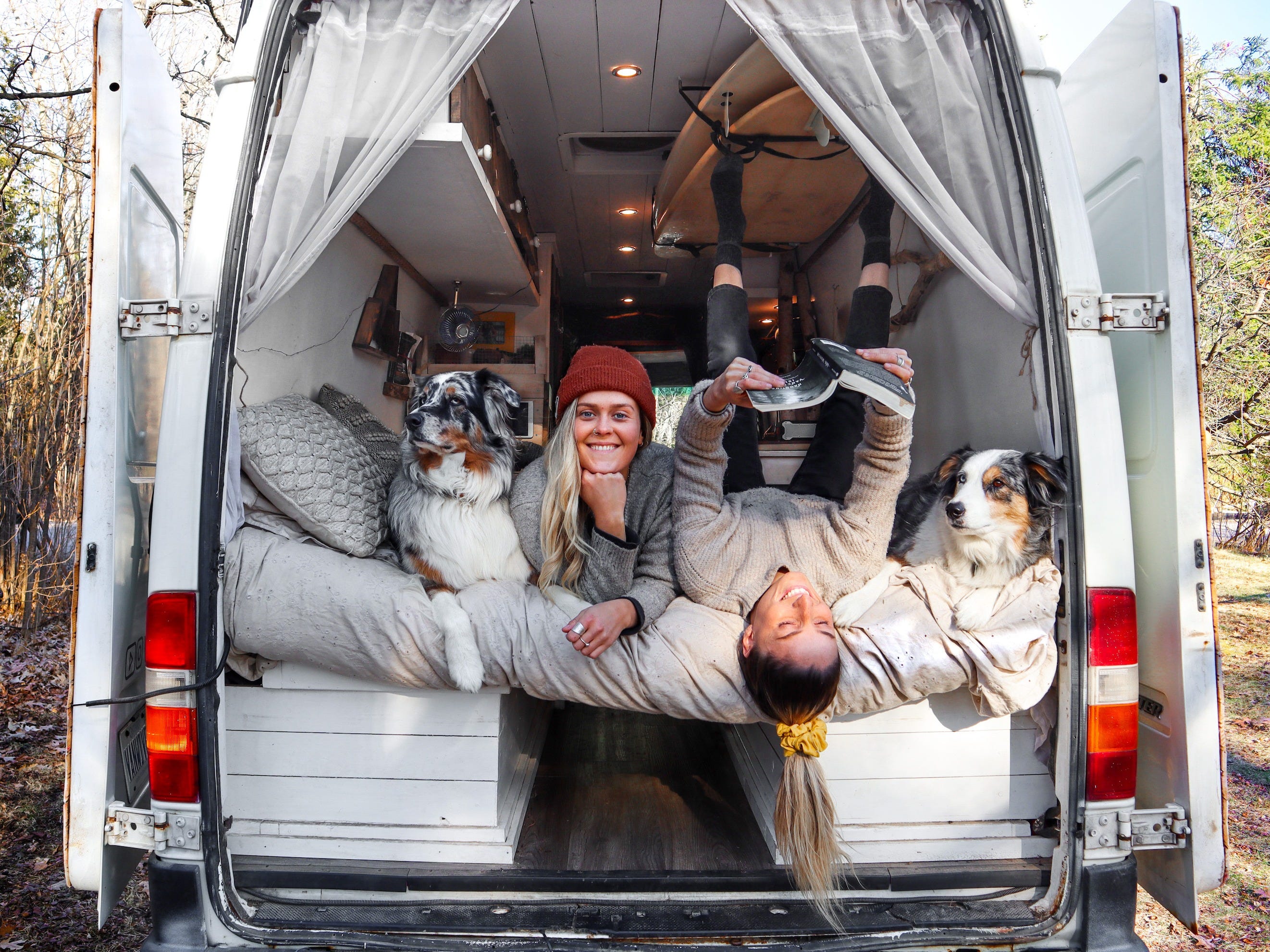 “When it hit, we felt like we were going to be fine based on where we were,” Drinkwalter told Insider. “Everything was coming along slowly and not progressing quite as fast as things were at home in Canada.”

“We were like, ‘Oh, you know, we’ll just stay here and ride it out as long as we can until we have a reason to think otherwise,'” she said.

But when things started closing down in Guatemala in mid-March, they decided to rethink things. 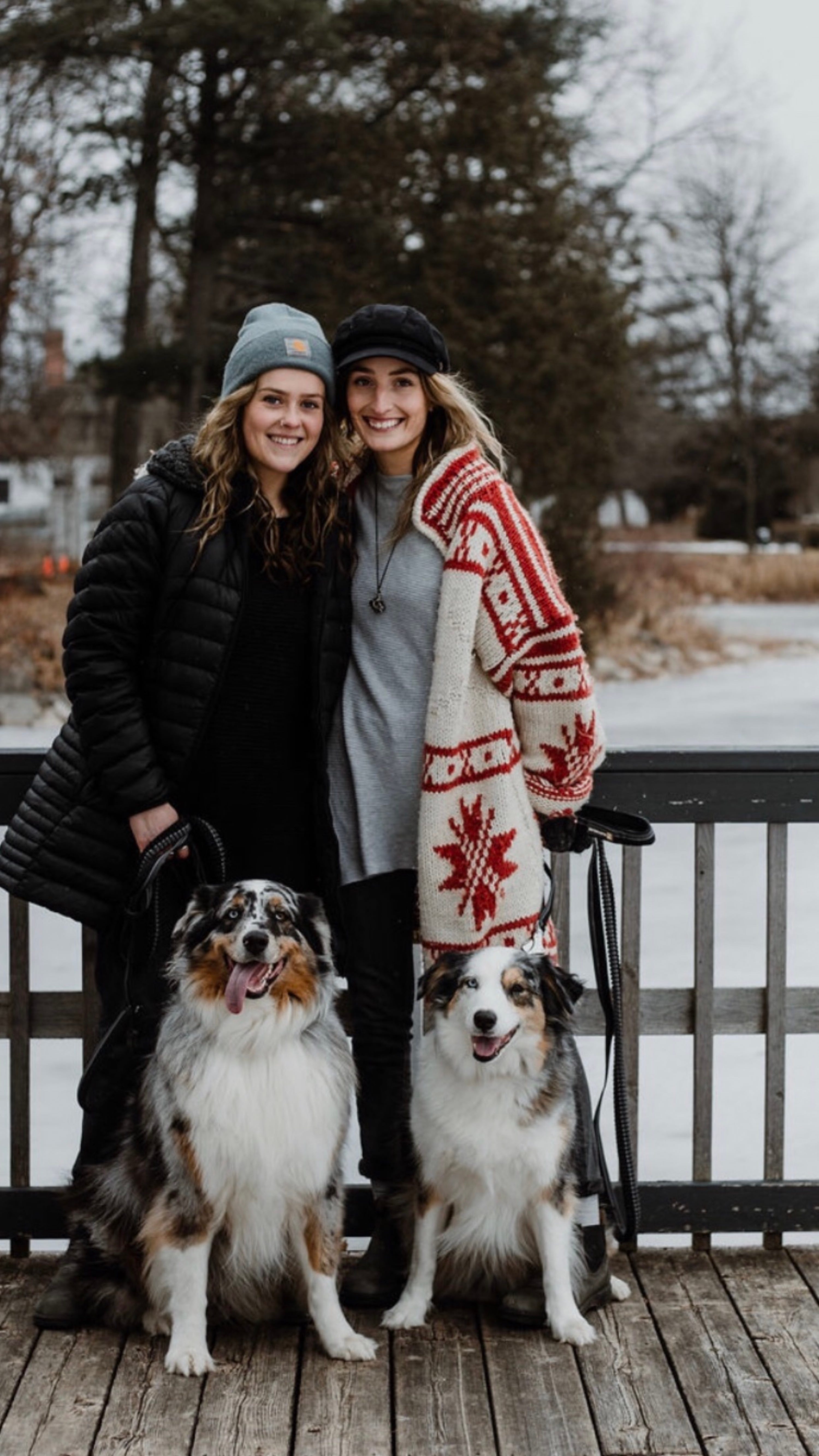 SWNSThey had to leave Guatemala.

There was a curfew that lasted from 4 p.m. until 4:00 a.m. while Drinkwalter and Canning were in Guatemala.

“There were police checks on the road and only essential travel,” Drinkwalter said. “It made it really difficult to get around and to find new places to camp. But luckily, a subscriber on our YouTube channel reached out to us and said that she was in Guatemala City and that she had a farm a few hours away that we could stay at until we could figure out how to get home.”

The couple immediately headed to the farm, where they stayed for about a week.

“It was really, really kind, and definitely brought us a lot of peace in that situation because it was pretty stressful,” Drinkwalter said.

After a week of waiting, the couple got approval to travel. 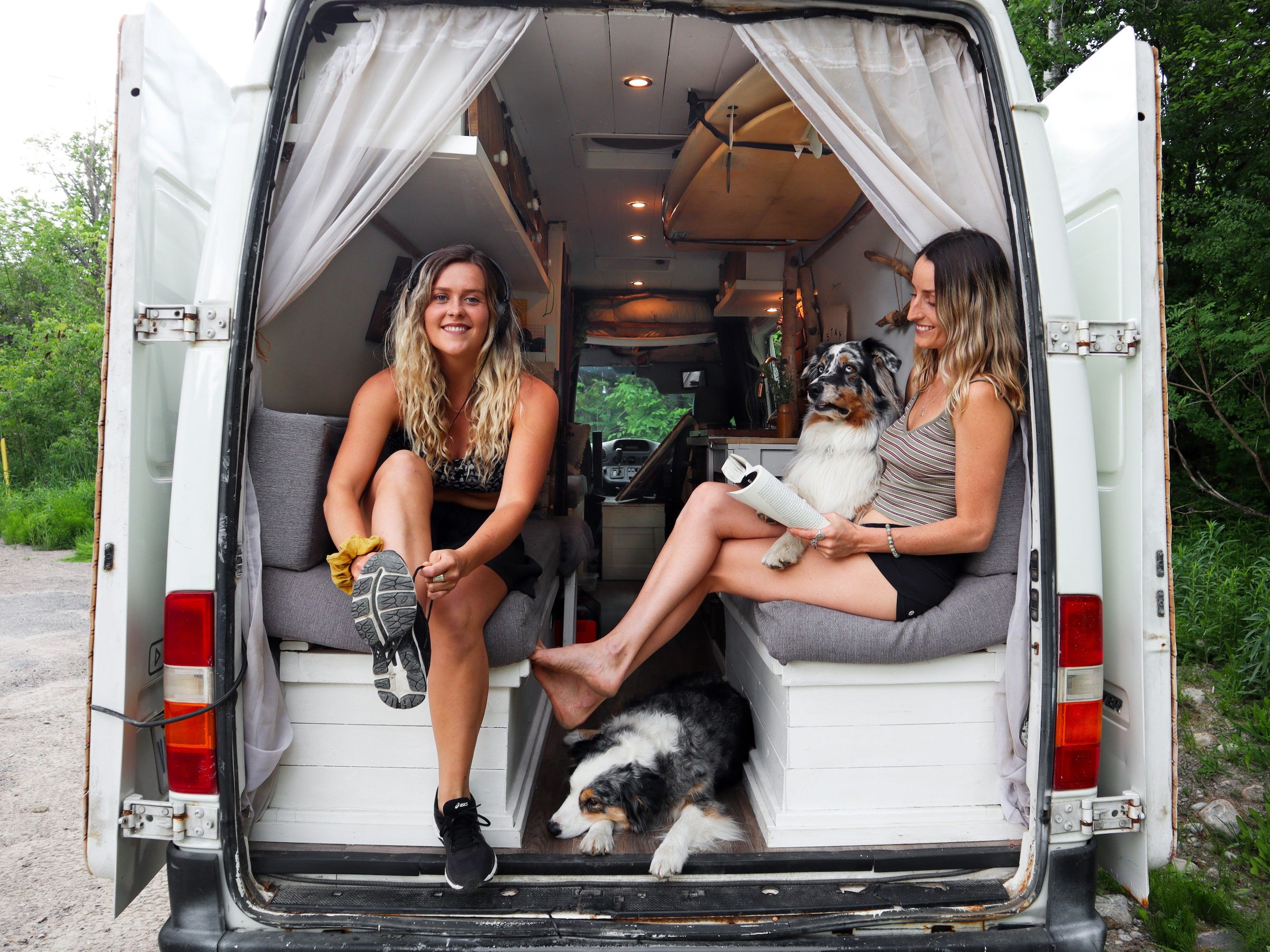 “We were always a little bit unsure if we would be able to make it through all the borders back to Canada,” Drinkwalter said.

“If we were going to leave, we were like, ‘OK, we want to get all the way home,'” she said. “So as soon as we found that out, we packed up in five minutes and we just beelined up.”

Drinkwalter and Canning made it from Guatemala to Canada in a week. 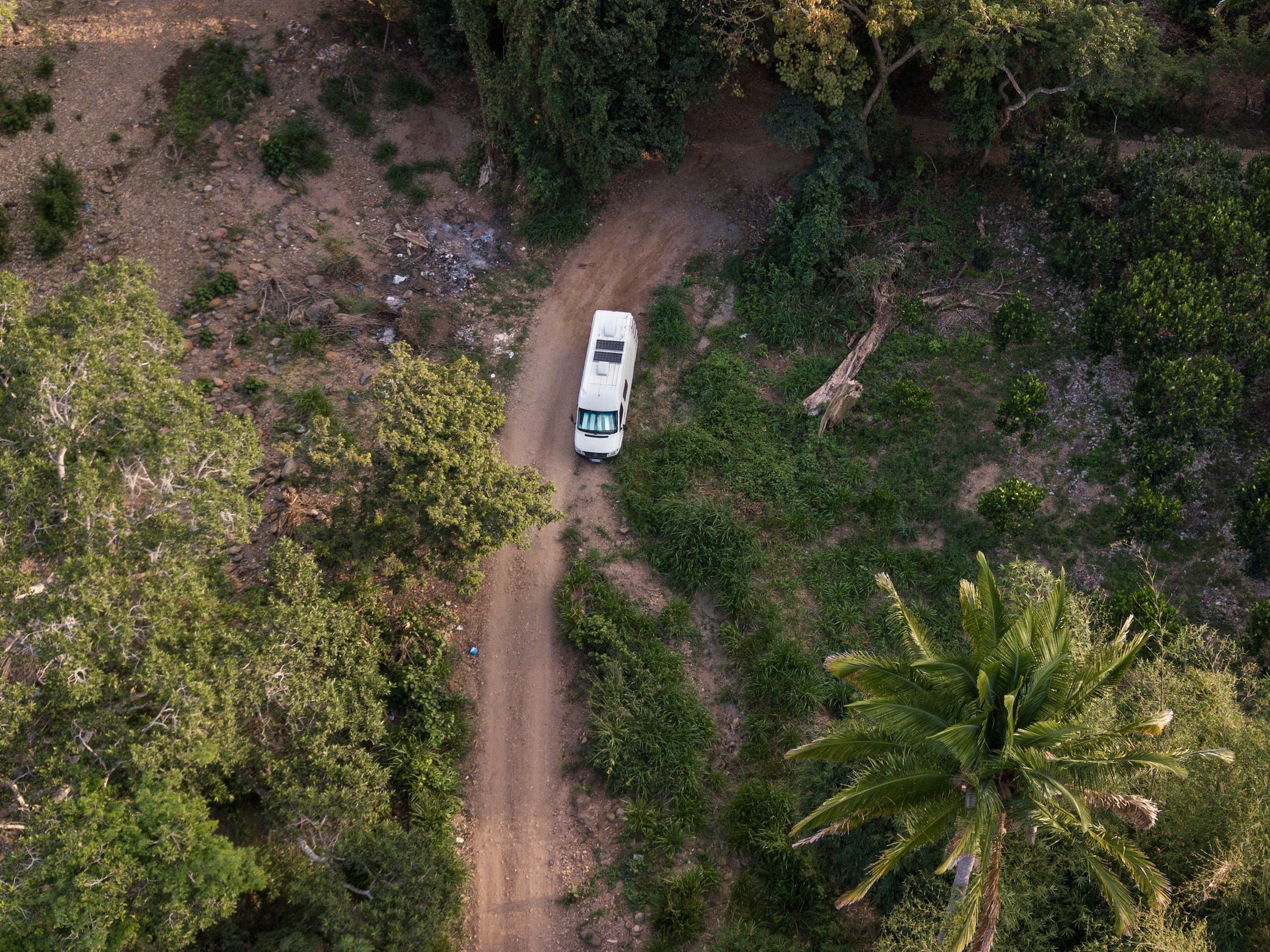 “We didn’t really stop at any campsites or go to any beautiful places,” she added. “Normally we’d go down this road to park here or there to get that beautiful view, but we were on a mission.”

“We pretty much slept at gas stations and the odd paid parking, but really it was like drive, sleep, drive, sleep,” Drinkwalter said.

Drinkwalter said she and Canning had mixed feelings about heading home. 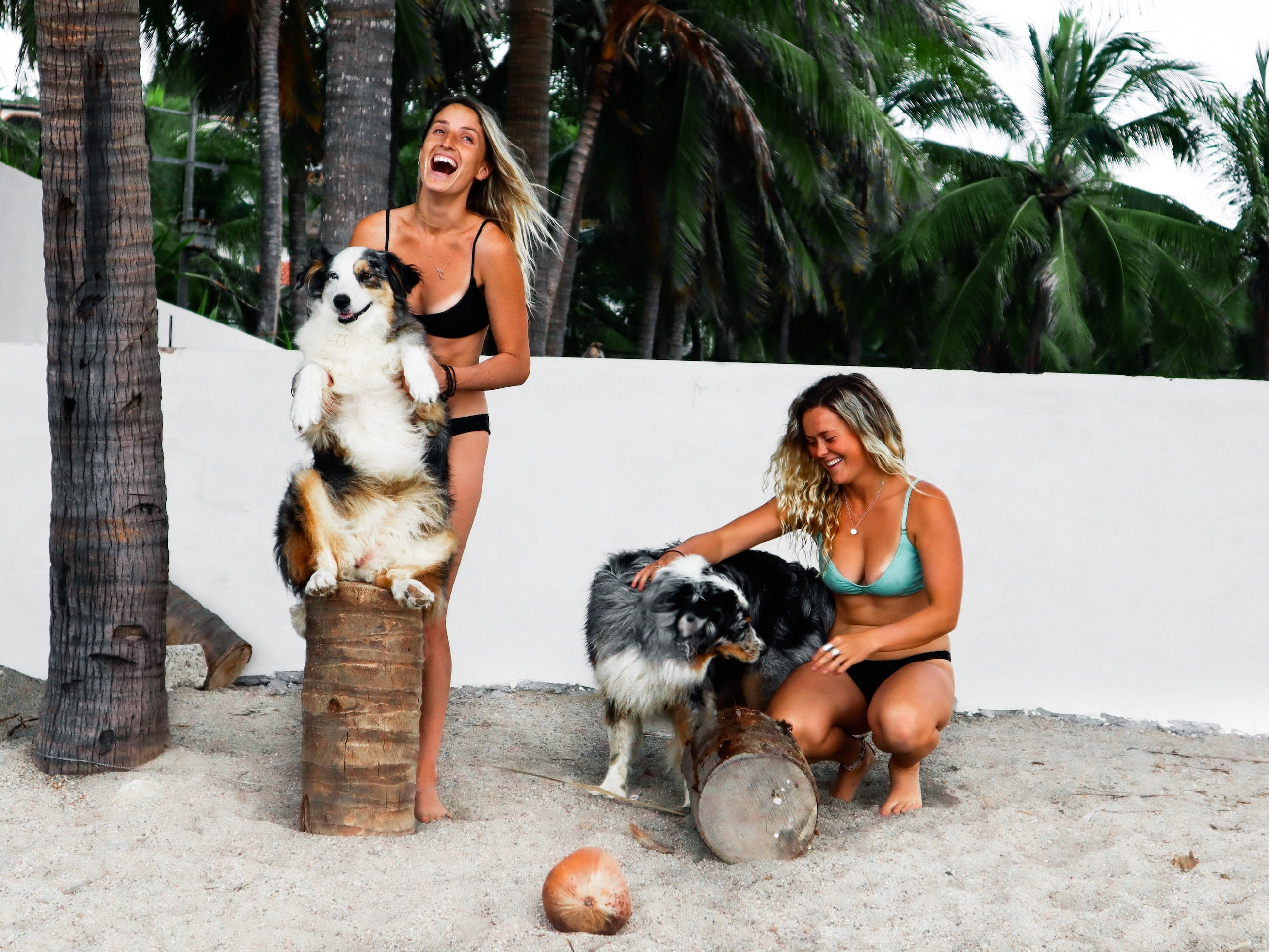 SWNSDrinkwalter and Canning were sad about stopping their trip.

“It was such a mixed bag of emotions,” Drinkwalter said, adding that they were sad because their “dream journey” was coming to an end.

“And then it was happy because we were like, ‘Oh wow, we’re going back to Canada in summer,” she added. “We used to be close to our families during this time.”

“It’s so bittersweet,” Drinkwalter continued. “It took us so many months to get there, and it was such a beautiful journey there. Then it took us seven days to drive from Guatemala to Canada.”

But the couple has plans to travel again when things start to clear.

Lately, the couple has been travelling locally around Canada. 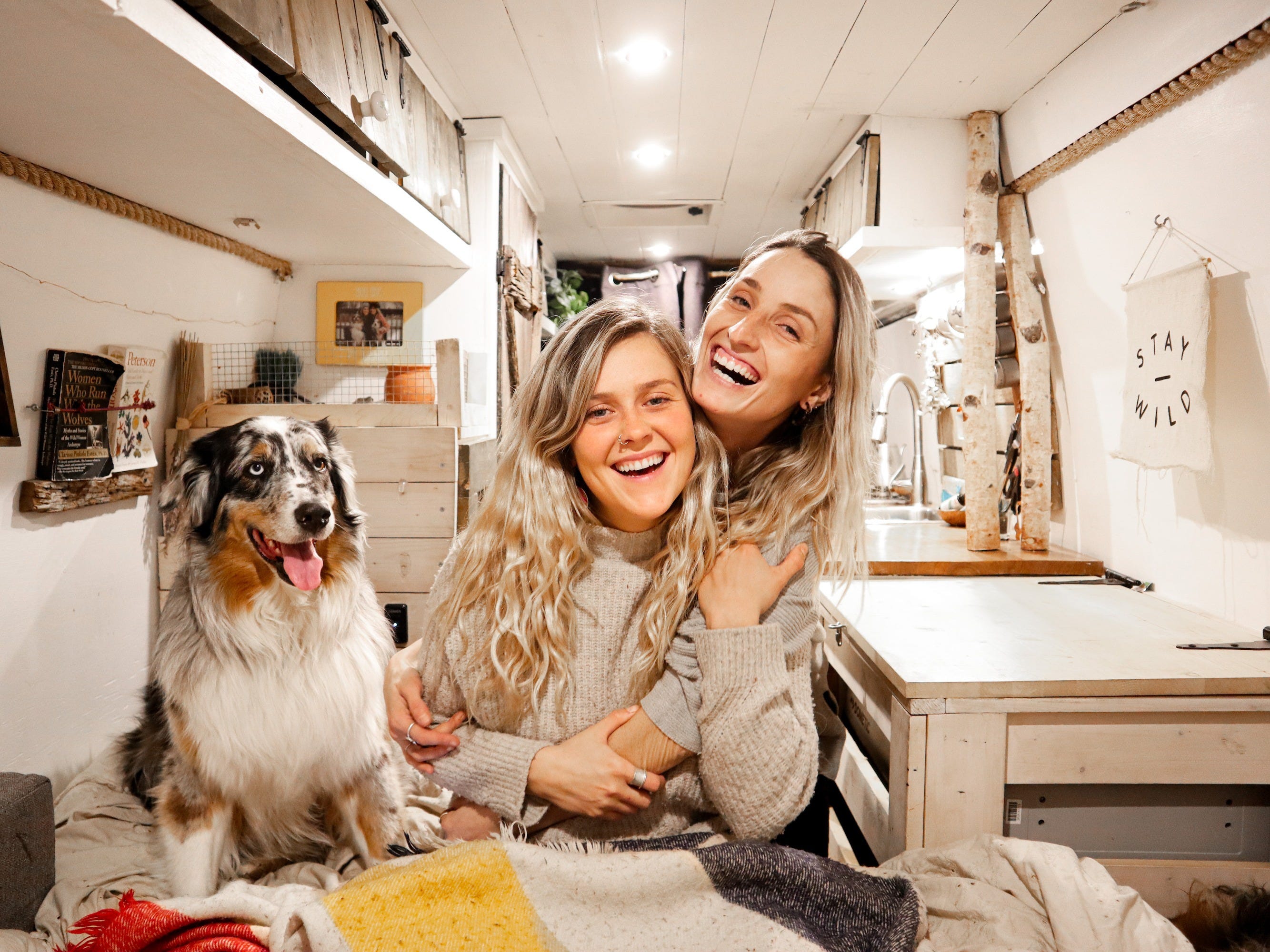 “We are spending most of our time travelling around the province, but we actually haven’t left the province yet due to the government’s restrictions,” Drinkwalter told Insider. “This is the safest way that we can do what we love doing right now.”

“We’re waiting for the day that we get the green light to go on with our travels, and as soon as we possibly can, we will head south and go right back to Guatemala and continue to Argentina,” she said.

Despite the difficulties they faced, Drinkwalter and Canning are determined to continue their nomadic lifestyle. 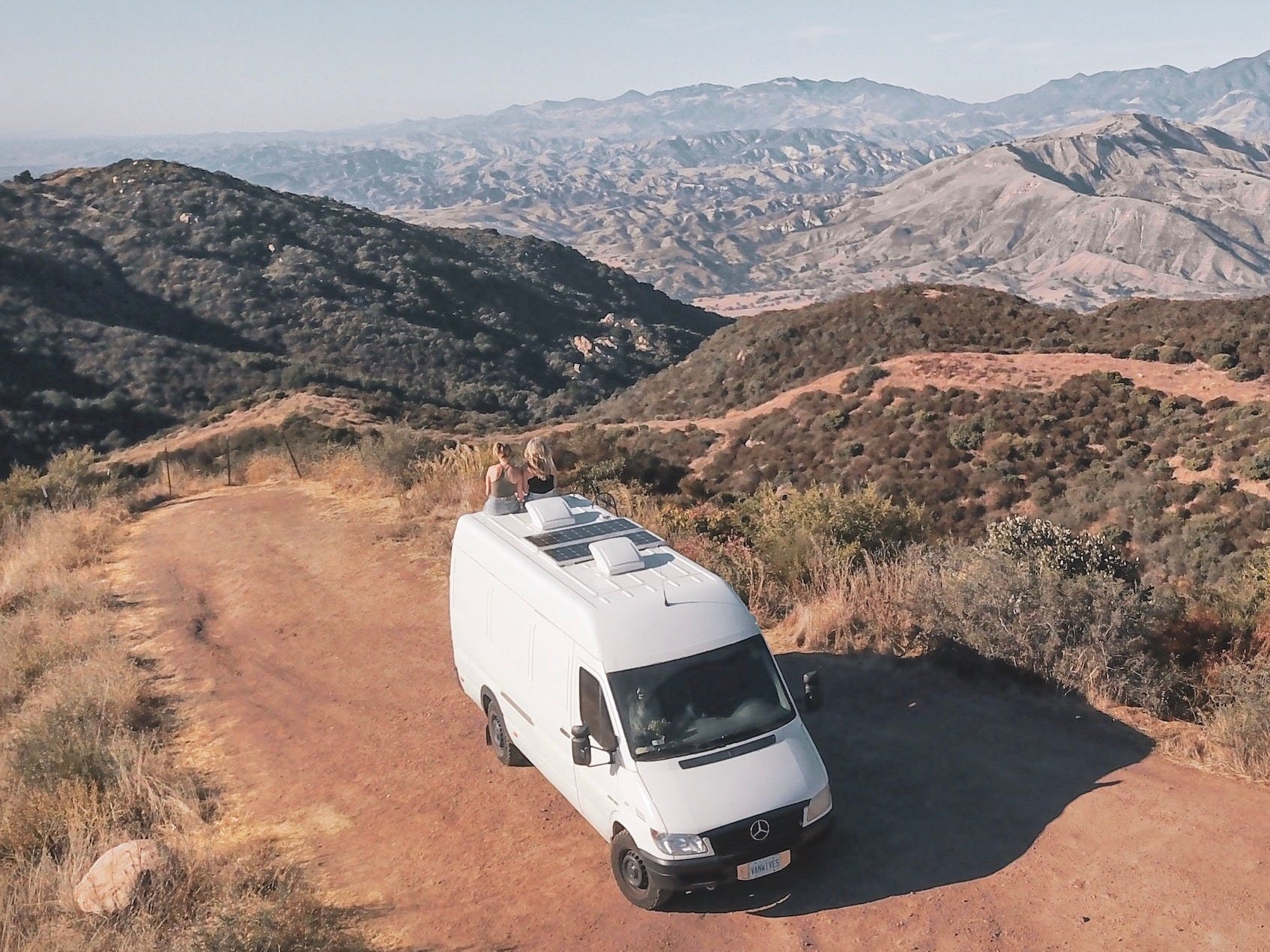 SWNSThey’re committed to getting back to their trip.

“We just learned so much since moving into the van and travelling,” Drinkwalter said of why they love van life.

“Jasmine’s picked up Spanish, the ever-changing landscapes, and the hikes” are just a few examples of the things that make them love their lifestyle.

“You can’t beat just being that close to the culture,” Drinkwalter said.