A couple converted a $20,000 Ram ProMaster van into a tiny house while in lockdown, and they are now road tripping across the country — take a look inside 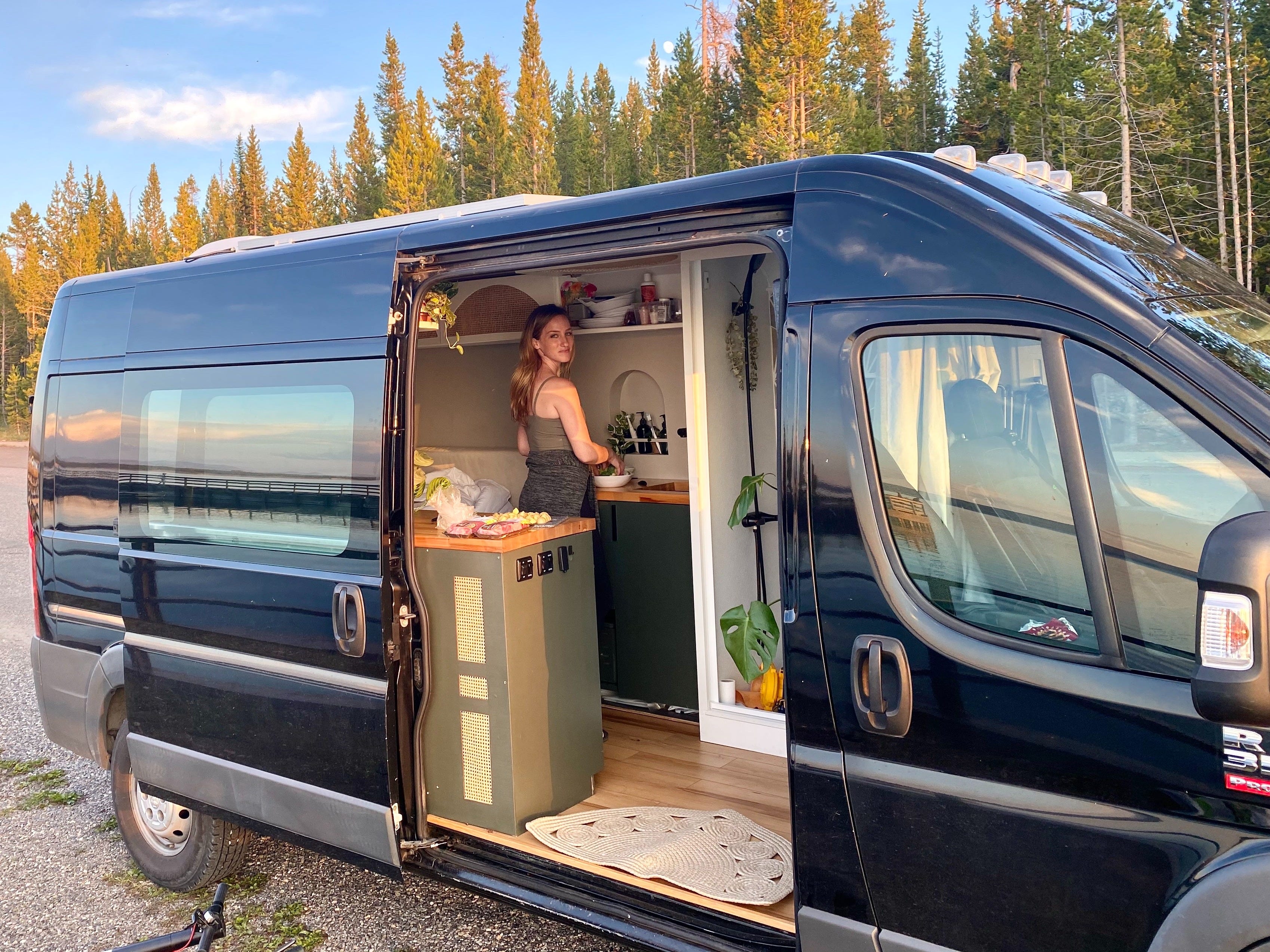 Courtesy of Deanna DunnDeanna Dunn in her converted sprinter van.

As most of the country spent the first two months of lockdown inside, one couple used that time to completely renovate a sprinter van.

For two months, Deanna and James Dunn worked on turning a Ram ProMaster van into a tiny house. Now they’re embarking on a cross-country road trip from New Jersey back to their home base in California.

Keep reading to learn how they did it and to get a peek inside their modern, second home on wheels.

Last summer, Deanna and James were looking for innovative ways to travel on a budget, so they bought a vintage camper — but it didn’t go as planned. 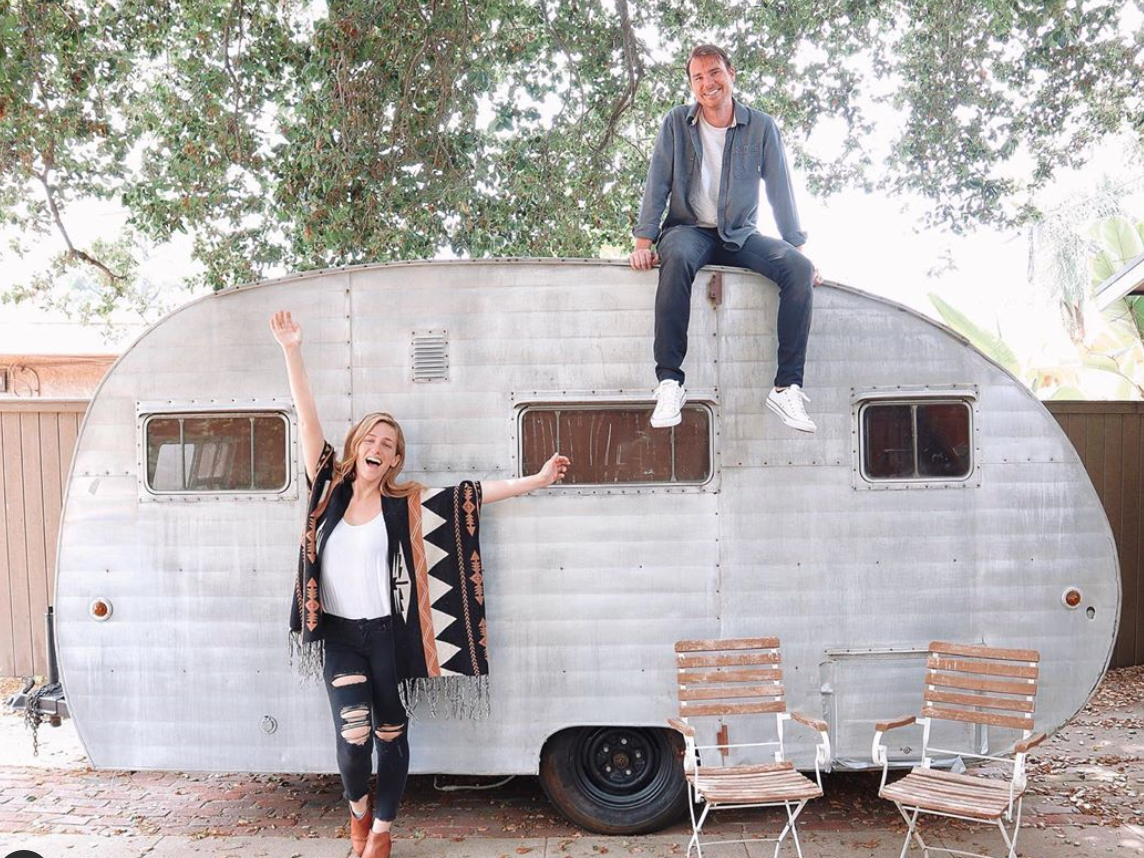 Courtesy of Deanna DunnDeanna and James and their ’50s camper.

The Dunns work long hours for a few weeks at a time in a power plant in Los Angeles, and then they have large chunks of time off. Although they live full-time in the city, the couple uses their time off to travel, so they were looking for an inexpensive way to see the country without paying for plane tickets or hotels.

In 2019, the couple decided to buy a 1950s camper, and they converted it into their second home. But they struggled to find parking in Los Angeles for their camper and didn’t like how they had to hitch it to a car when travelling.

“We then stumbled across the sprinter van world, and we found it to be so much stealthier and easier to travel in,” Deanna said.

They decided to convert their first sprinter van that fall.

In March, they moved out of their Los Angeles home and planned to stay on the East Coast for a couple of weeks while figuring out their next move. Then the lockdown went into effect. Courtesy of Deanna DunnDeanna and James.

In March, Deanna and James knew they were going to spend some time on the East Coast, so they decided to move out of their permanent home in Los Angeles and leave everything in storage. They even sold their sprinter van because they knew they eventually wanted to upgrade.

While spending time in New Jersey at Deanna’s parents’ house, the coronavirus swept through the country, sending several states into complete lockdown. Since they didn’t have a home to go back to, the couple decided to spend their time building a new van with the knowledge they gained from the previous two builds.

They bought a Ram ProMaster van for $US20,000 and started renovating it in Deanna’s parents’ driveway. 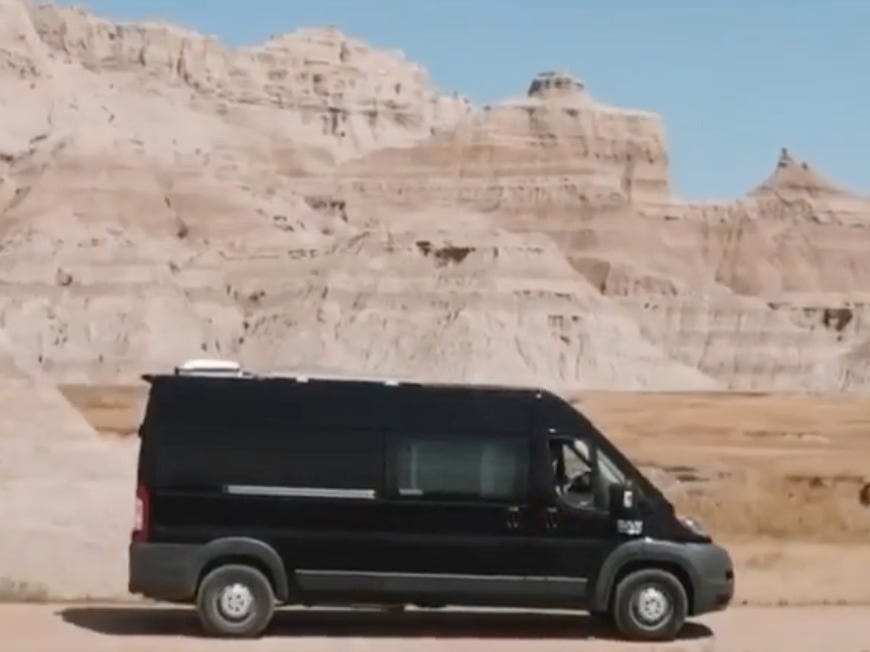 Although it wasn’t under the conditions they expected, there were pros to building their new sprinter van in New Jersey. Deanna said her parents have a garage that was perfect for them to use as a workshop, and she had access to her father’s tools.

Deanna said the best part of converting their camper was implementing everything she learned from the previous builds. 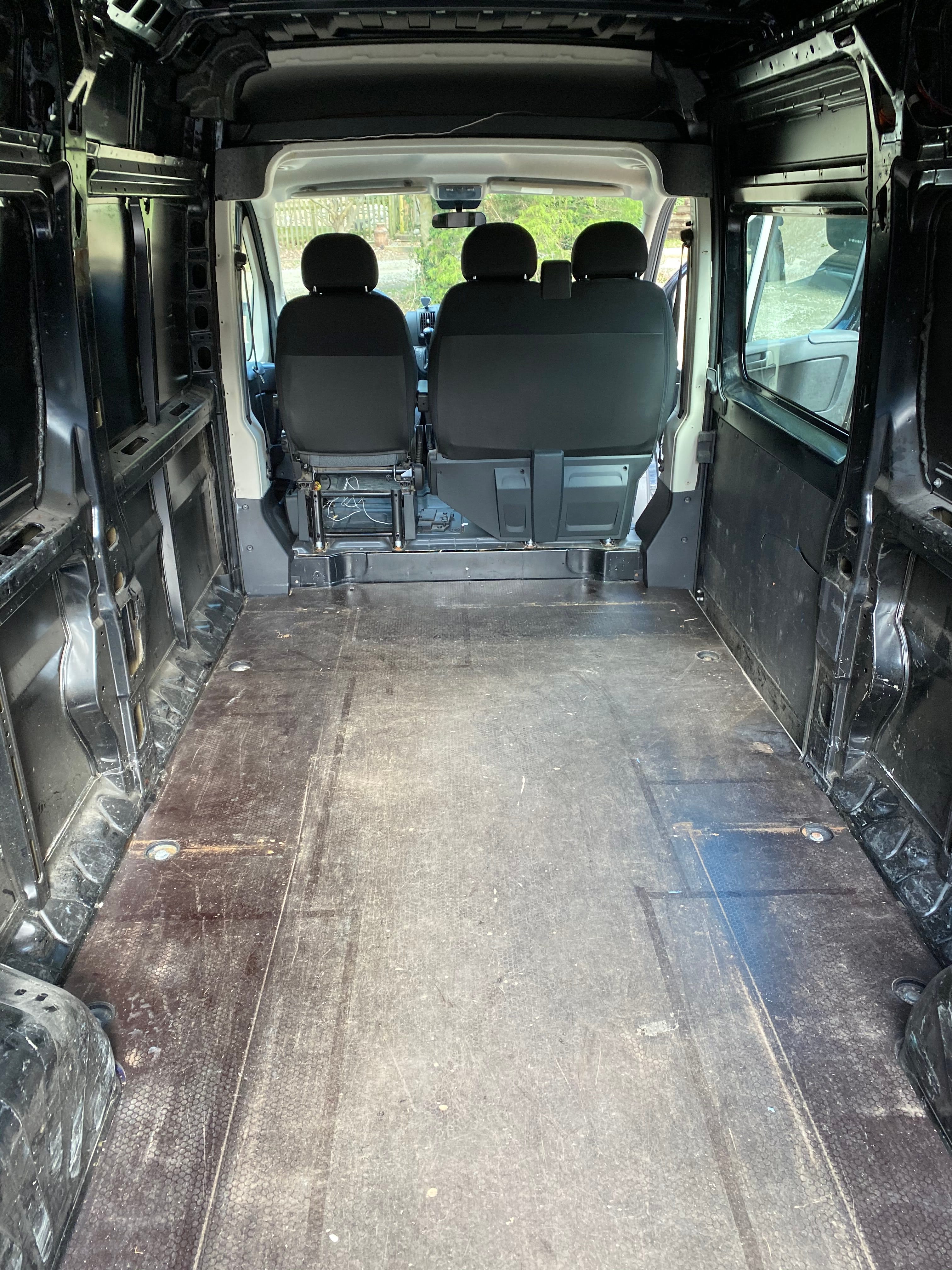 Deanna decided that this time she would sit down and plan out the entire remodel beforehand. In doing so, she said she made smarter decisions about furniture and storage.

“We learned that we needed to use every nook and cranny for storage and utilise as much space as we can,” she said.

She also said it was a “learning curve” to figure out what materials you can use in a van that is constantly on the move.

“We learn as we go,” she said. “There’s not exactly a guidebook.”

“It was definitely different doing a renovation during quarantine,” Deanna said. “We just had to order so many things online. There were a few things we had limited options on.” 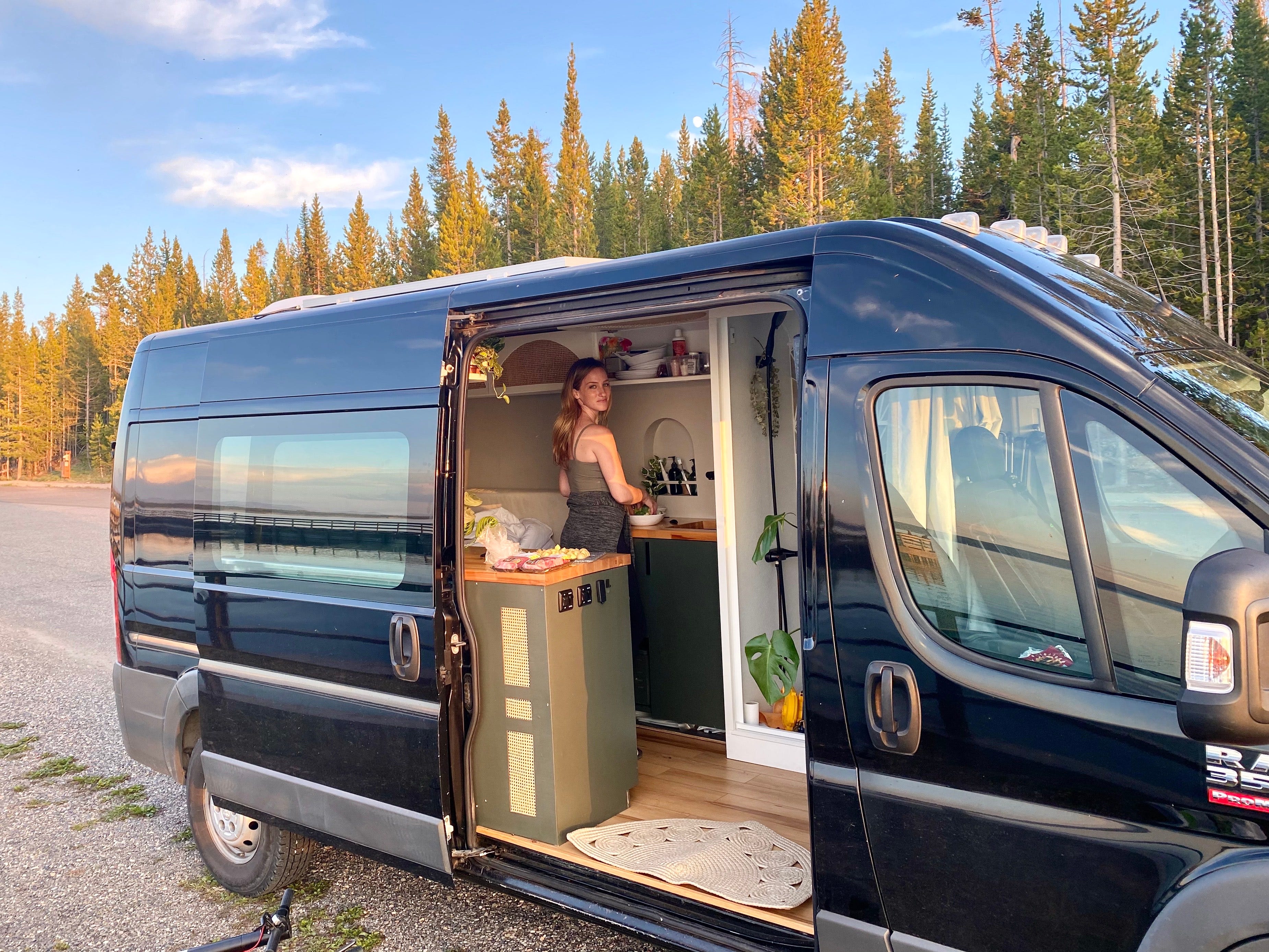 Courtesy of Deanna DunnDeanna in the van.

She said in the end, she was able to make it all work and that it was a good “distraction” from the pandemic.

“There’s been a whole lot of research, but it definitely has made us so much more creative in how we do things because we problem solve as we go,” she said.

After two months and $US15,000 in renovations, their home on wheels was complete. “We loved being able to take design risks and seeing it all come together,” Deanna said. “We love interior design, and we love creating a cosy space.”

The first feature you see when stepping into the van is the luxury shower, which isn’t too common in van conversions. “There are things already difficult about travelling in a van, but [this time], we wanted to feel completely self-sustainable, especially during the pandemic where we don’t want to go into public places,” Deanna said. “We wanted to be able to shower and go to the bathroom without a problem.”

So they decided to build a full shower and toilet into the van. They researched the appropriate materials and found a silicon grout that can bend and move with the van without the tiles cracking.

The toilet is compostable and can be easily moved out of the shower when bathing.

Next to the shower, there is a small kitchen counter, which is equipped with a sink. There’s another set of drawers, which lock so that they stay closed when the van is moving, and countertop space on the opposite wall.

At the back of the van, there are two couches and a table that doubles as a place to eat and work. 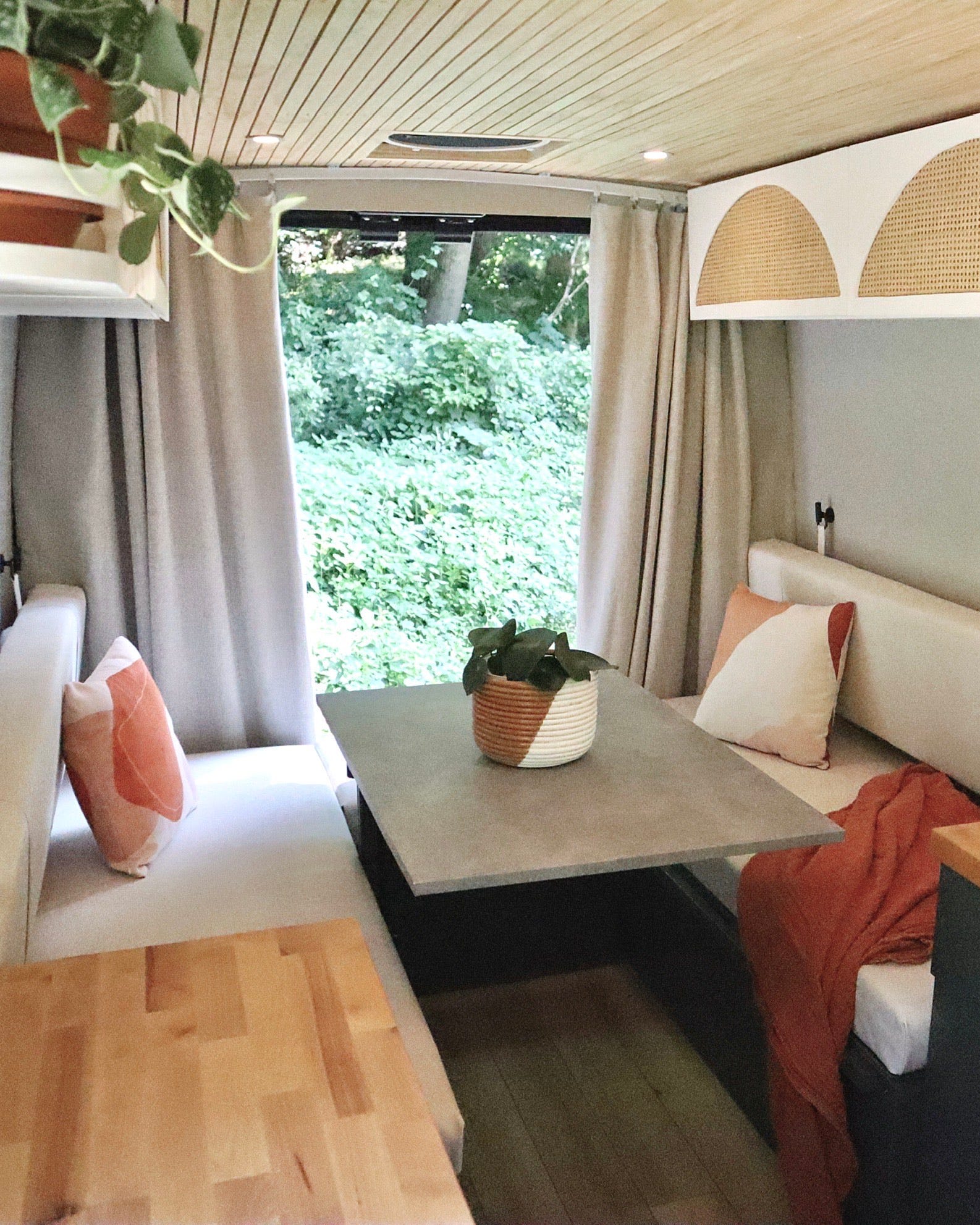 Although they like to leave the doors open to see the view, there are curtains for privacy.

When it’s time for sleep, the table efficiently converts into a bed. 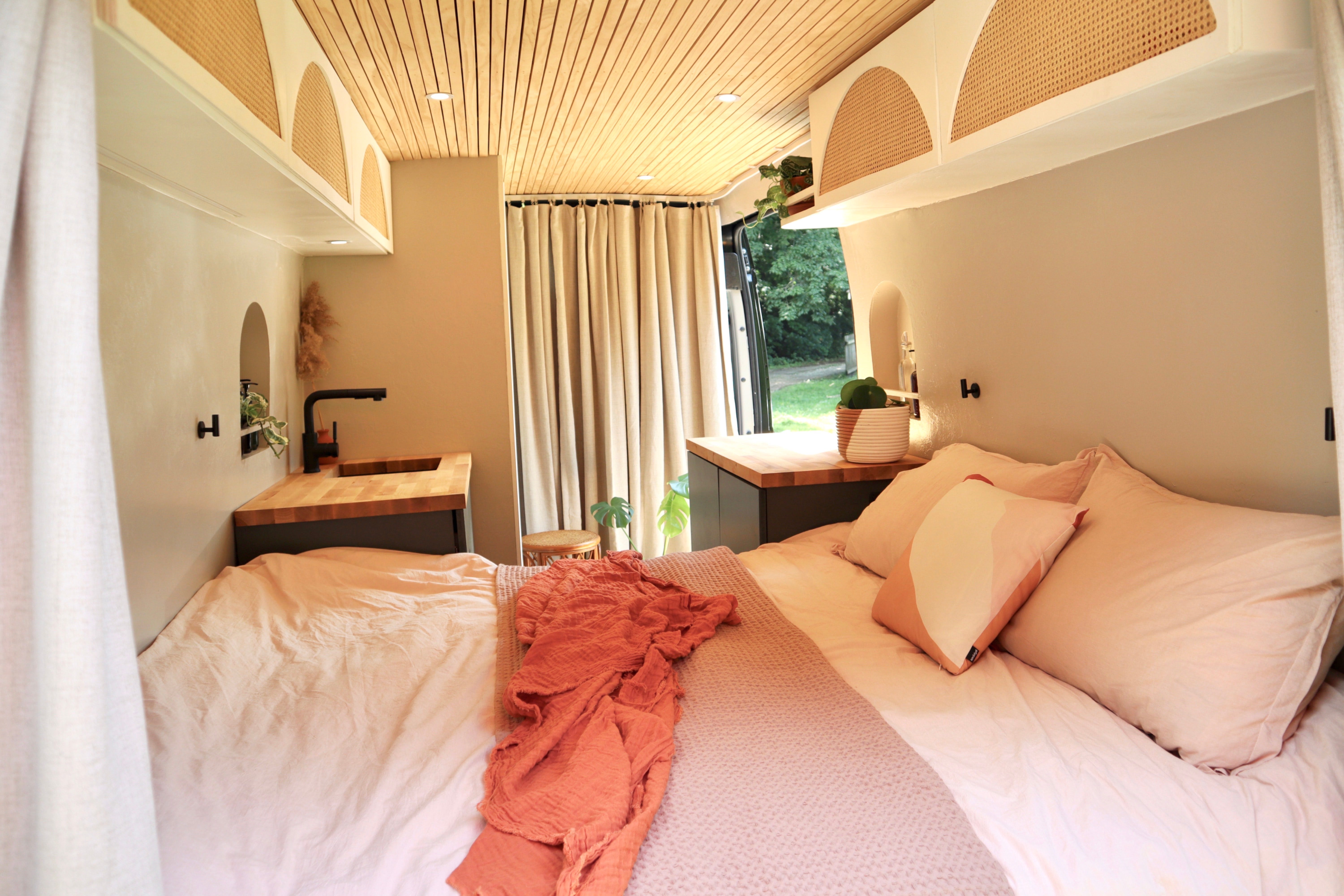 The table is pushed down to create the base of the bed. Next, the couple rearranges the memory foam couch cushions into a queen-size bed. They even add a mattress pad on top. In one of their TikTok videos, they said the bed is comfortable and even fits James, who is 6 feet tall.

The couple even built a hidden projector screen in their van for entertainment. 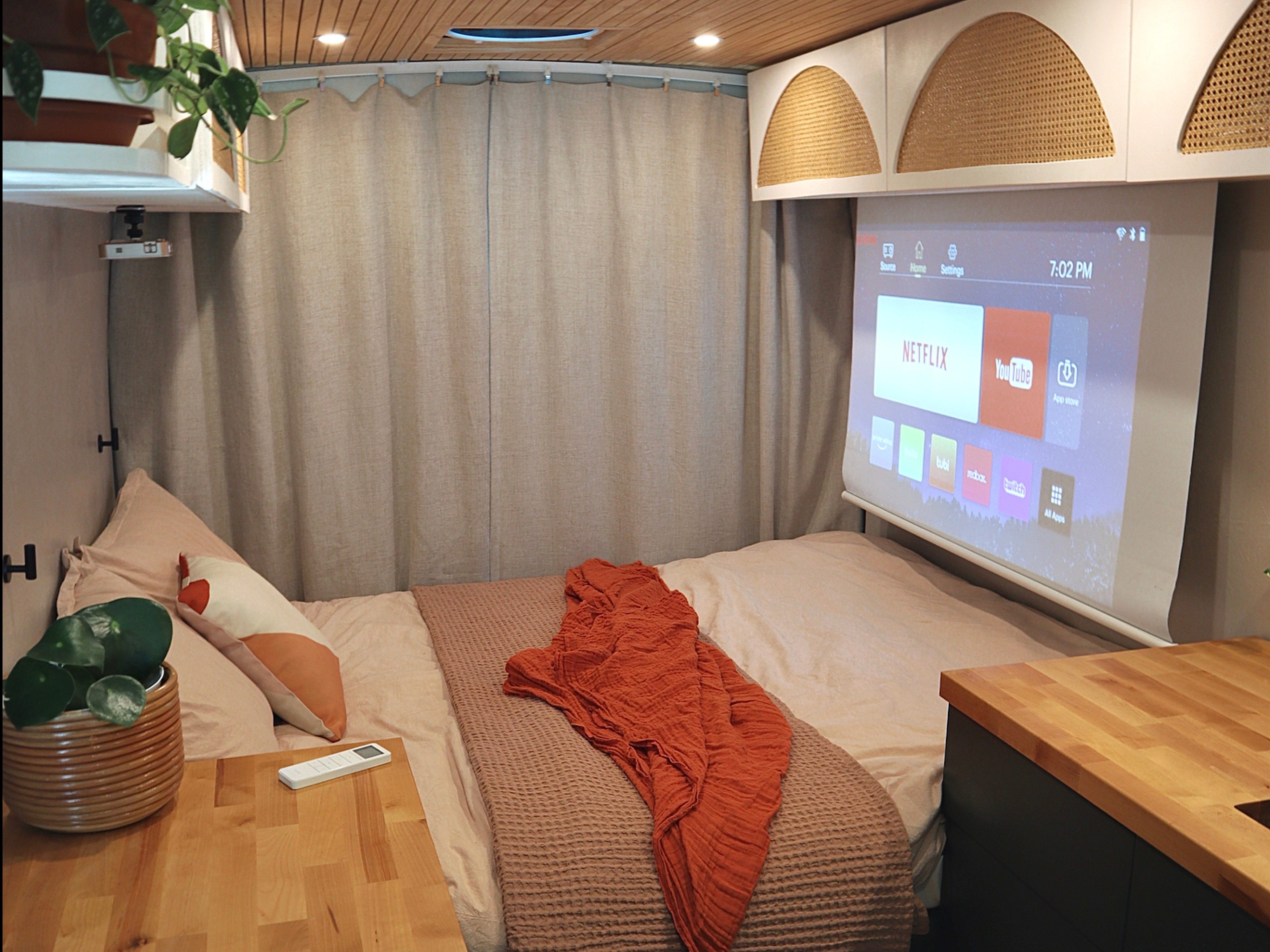 Courtesy of Deanna DunnThe projector hangs above the bed.

Deanna said a TV would be too excessive to hang in such a small space, so they opted for a projector screen. However, projector screens only come in large sizes, so they purchased an electric window blind made from the same material. They hid the projector in a cabinet and it comes down electronically.

“It’s so much fun to have a big screen in the van while being in such a small space,” Deanna said. “That’s one of our favourite parts.”

For added entertainment, they crafted a cornhole board that pops out of a drawer at the back of the van. “It doesn’t take up any extra space,” she said. “This way we have that tailgate feel when we set up at a campsite.”

After completing their van, the couple set out on a cross-country road trip to head back to their home base in California. Courtesy of Deanna DunnJames and Deanna.

While Deanna said they are not encouraging people to get on the road in the middle of a pandemic, she and James did it out of necessity to get back home to Los Angeles, where they will move into a traditional home again.

“We’ve been opting for outdoor activities in the national parks and trying not to come in contact with anybody,” she said. 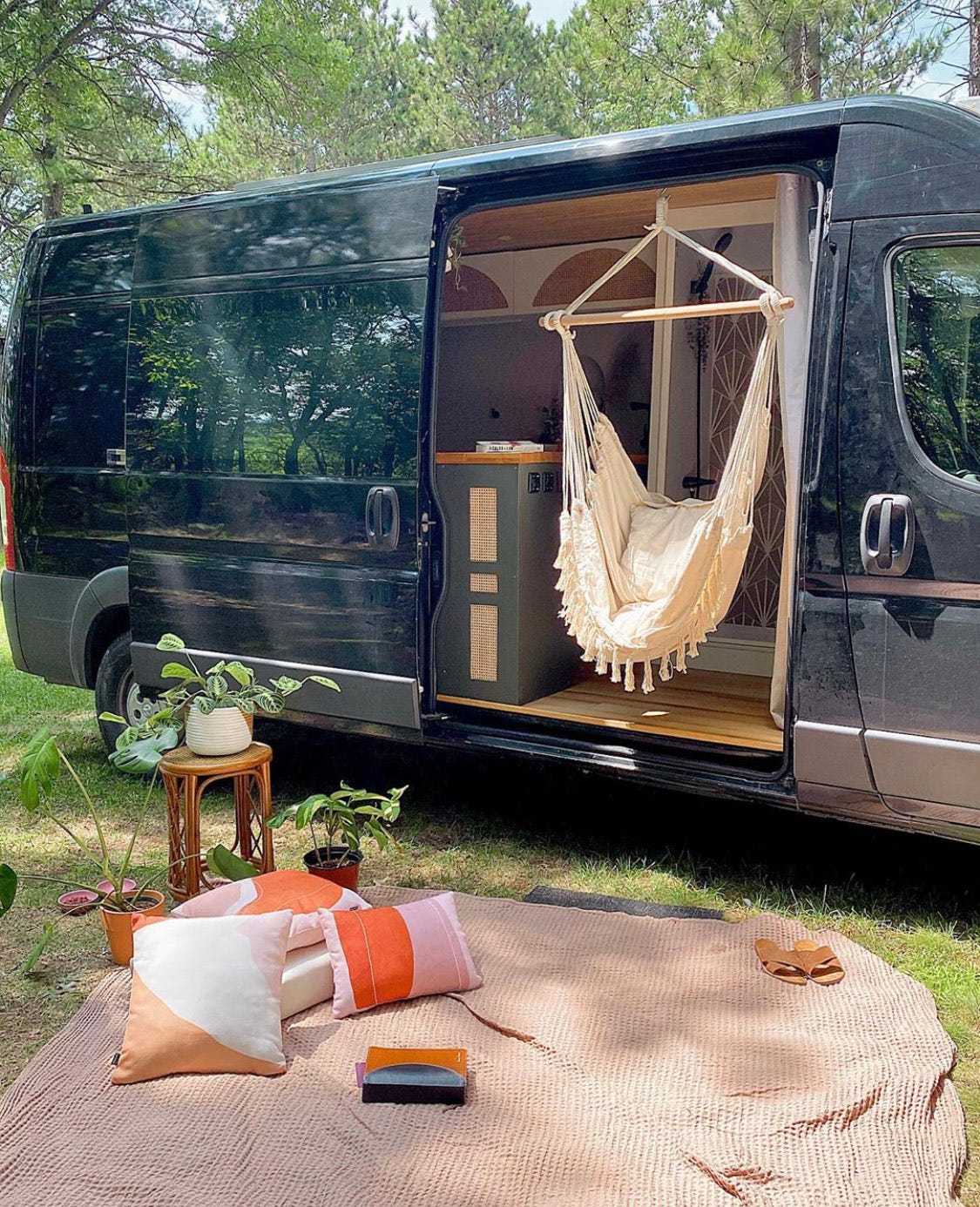 They’re taking the northern route, so they have been to Chicago, Yellowstone National Park, and are currently working their way down Utah.

Once they arrive in Los Angeles, the couple will be renting out their van when they’re not using it, but Deanna warned that life on the road isn’t always easy. 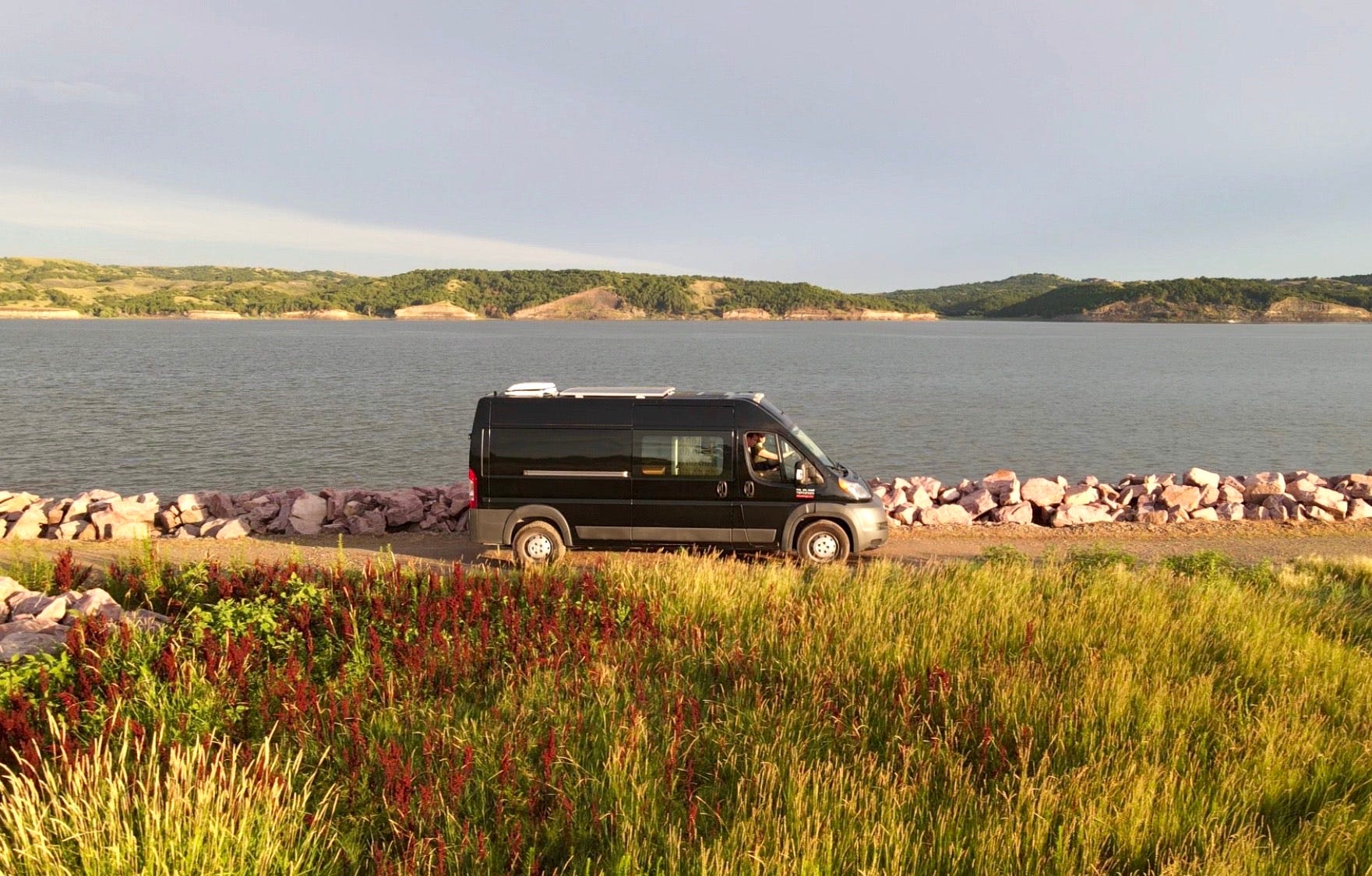 Courtesy of Deanna DunnThe van is on the road.

“This doesn’t take away all the adventure and fun that van life gives you, but there are sacrifices,” Deanna said. “It definitely is difficult at times, especially when you’re travelling during the pandemic. There are things that go wrong, and you have to be prepared to fix them on the go.”

She added, “To us, it’s definitely is worth it.”

Do you live in a tiny house, RV, camper van, or other unusual housing structure and want to share your story? Reach out to Frank Olito at [email protected]