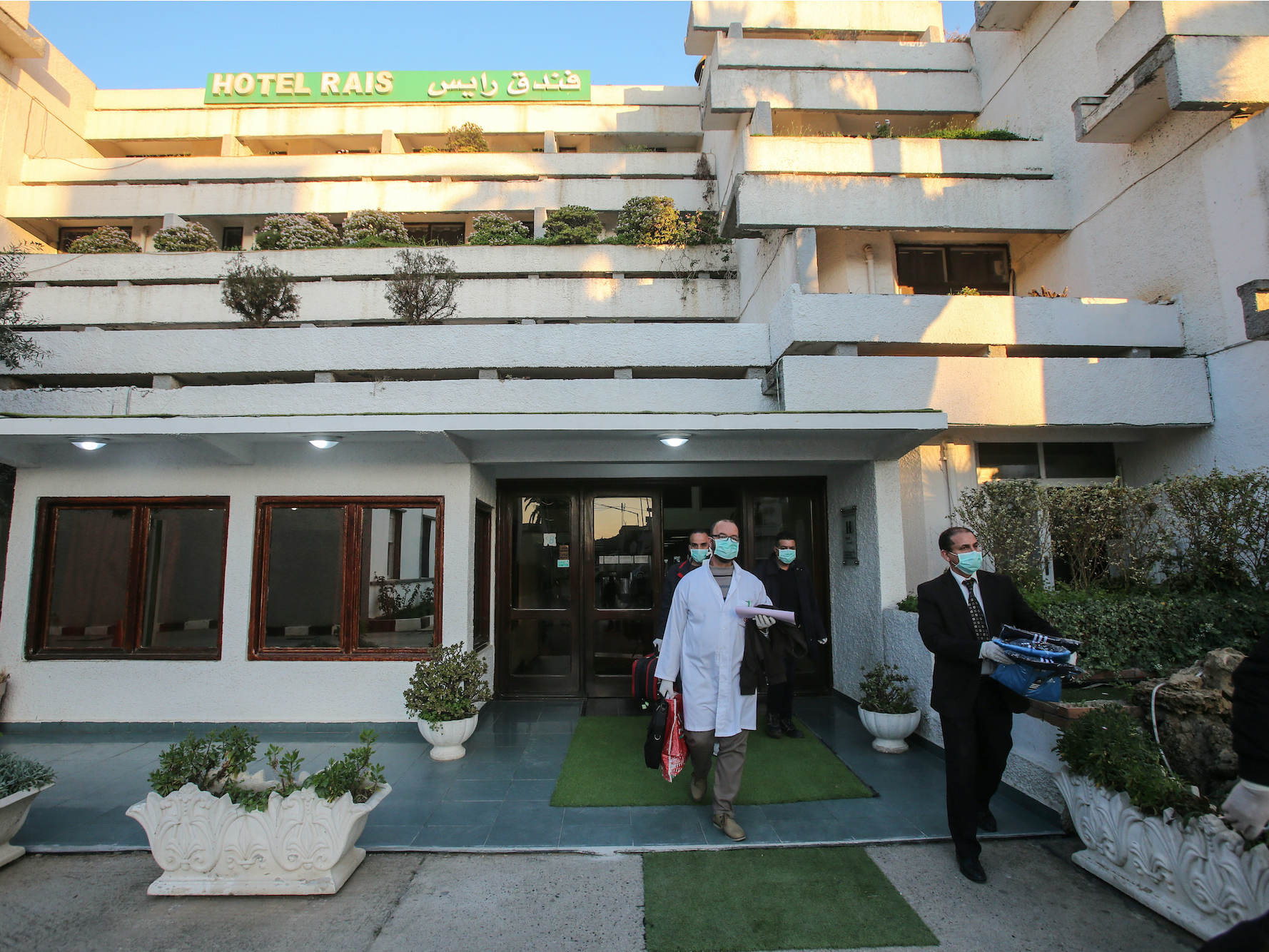 Ramzi Boudina/ReutersParamedic staff leave a hotel where people who were evacuated from Wuhan, China, are quarantined near Algiers, Algeria, on Feb. 4, 2020. Algeria is one of the countries least prepared for a major infectious disease outbreak and already has 20 confirmed cases of coronavirus.

Some countries may be less equipped than others to handle a massive disease outbreak like the novel coronavirus sweeping around the world.

The coronavirus has spread to over 145 countries with over 169,000 cases and over 6,500 deaths. Although some countries have implemented screenings at airports, expanded their testing facilities, and implemented other health measures and precautions, no country is fully prepared for a pandemic, according to recent research.

In a 2019 report, researchers from the Nuclear Threat Initiative, the John Hopkins Centre for Health Security, and The Economist Intelligence Unit created a Global Health Security Index to assess the health security of 195 countries. The report illustrates how prepared a country will be if an infectious disease outbreak, like the ongoing coronavirus epidemic, or other biological catastrophe happens. Unfortunately, some countries may be even more at risk than others.

Using open-source resources and data about each country, the researchers developed a health security score from 0 to 100, where 100 means a country is completely prepared for an outbreak.

The overall Global Health Security Index of each country was calculated from six categories: prevention of pathogens and toxins, early detection and reporting for pandemics, rapid response to pandemics, strong health system, compliance with international norms, and risk environment and vulnerability to biological threats.

Among those six categories, the overall lowest-scoring was strong health systems, which had a global average score of just 26.4. The overall highest-scoring category was risk environment and vulnerability to biological threats, which had a global average score of 55.0. That is, even the highest-scoring category on average still did not receive particularly high marks, suggesting that most countries are not fully prepared for a widespread disease outbreak.

The global average score for the full Health Security Index was only 40.2 out of 100, again suggesting a broad lack of preparedness.

The report categorised countries with scores below or equal to 33.3 as least prepared, and 72 countries fell into this category.

Algeria has 48 cases of coronavirus, four deaths, and 12 recoveries, while Iraq has 124 cases, 10 deaths and 26 recoveries. According to the health measures from the Global Health Security Index report, both countries suffer from poor communication with healthcare workers during a public health emergency and poor infection control practices and availability of equipment.

This article has been updated with comments from the Office of the President of Palau. Dominica’s lowest scores were in the prevention, health system, and detection and reporting categories.

The country’s health security score for compliance with international norms at 49.3 and risk environment at 54.0 were around the global average. Algeria has 48 coronavirus cases, 16 of which are from the same family, according to US News.12 of those infected with coronavirus have recovered and four people have died. The country’s lowest scores on the Global Health Security Index were in the detection and health system categories. 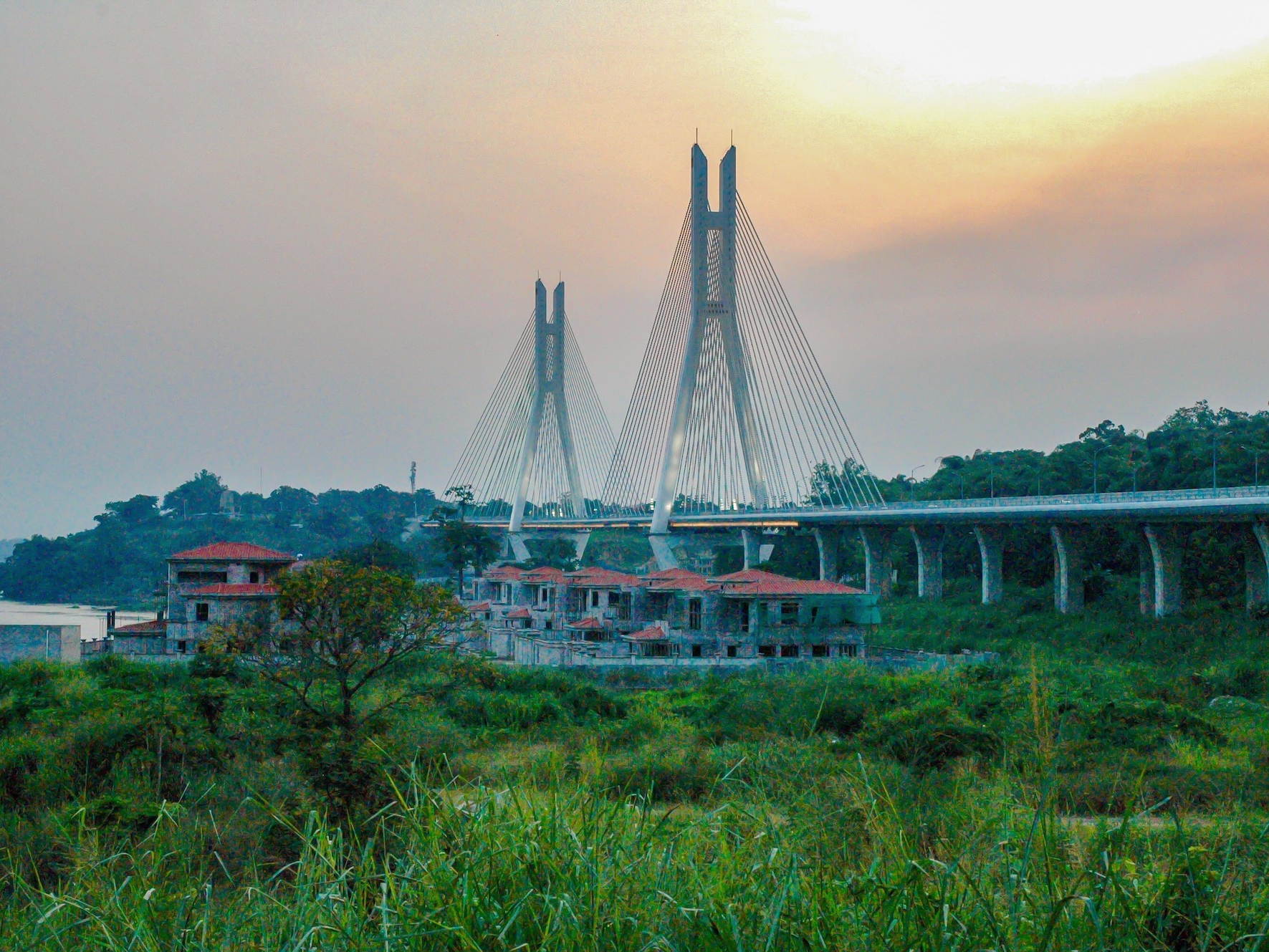 The Republic of Congo, which has one confirmed case of coronavirus, scored high in compliance with international norms, with a score of 56.8. This score is 8.3 points above the global average for that category.

However, the country has public health vulnerabilities that brought down its score in the risk environment category.

In addition, the country scored a zero in some of the sub-indicators of the rapid response category: emergency preparedness and response planning, exercising response plans, and emergency response operation.

According to the report, a score of zero in these sub-indicators mean that their research found no national public health emergency plan for pandemics or emergency operations centre in place. 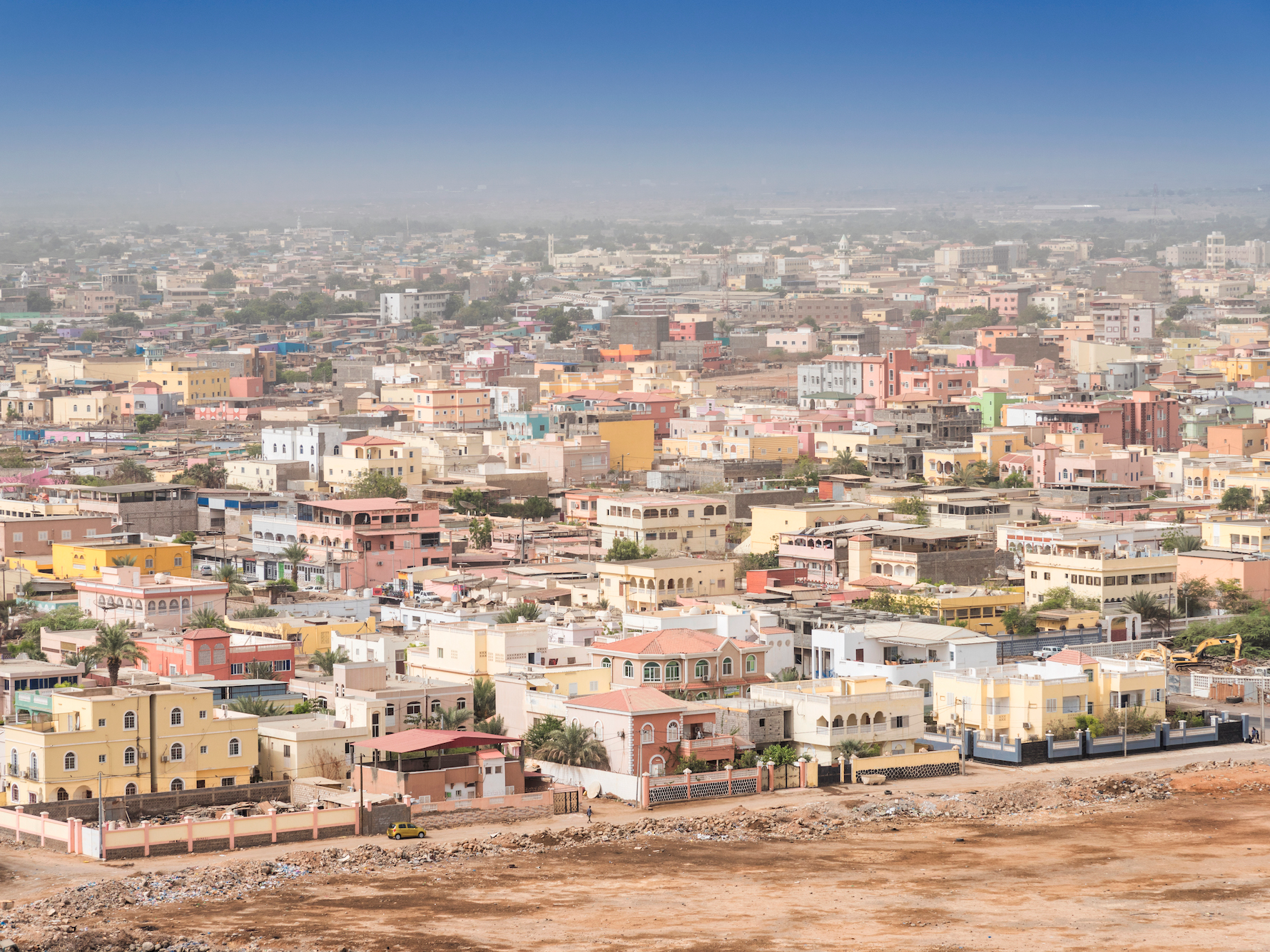 Although Djibouti was in the bottom group of countries for the majority of the subcategories, it was ranked as more prepared for the overall risk environment for biological threats, and for compliance to international norms. 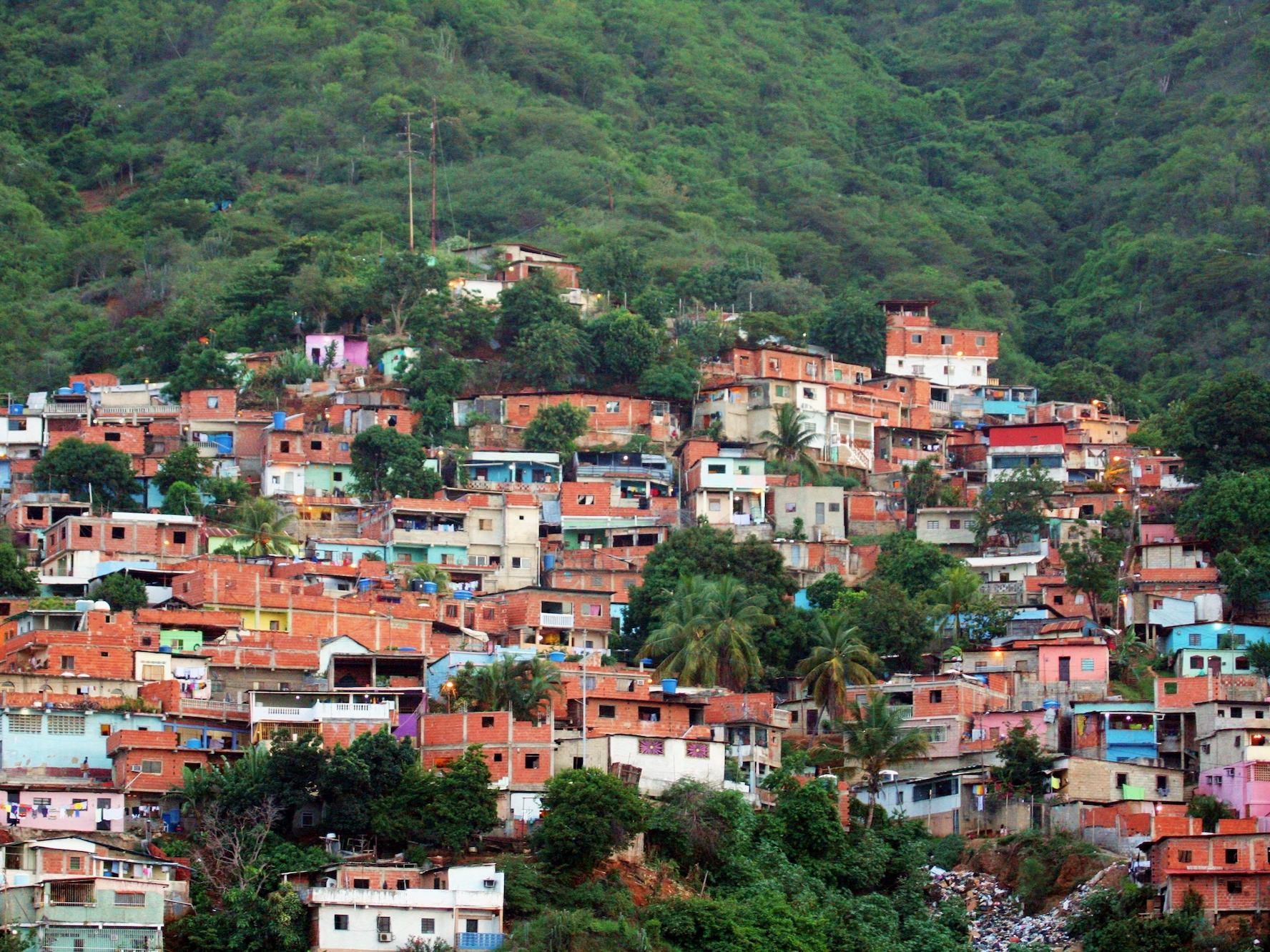 Venezuela has 17 confirmed cases of coronavirus.

The report noted that Venezuela was one of the countries that presented research challenges because of “ongoing conflict” within the country. Venezuela has a particularly low score for early detection and reporting epidemics because there isn’t evidence of ongoing surveillance of diseases.

A 2019 NPR report suggested that Venezuela’s healthcare system has broadly deteriorated over the last decade in the wake of broader economic and political turmoil, with hospitals suffering shortages of basic supplies. 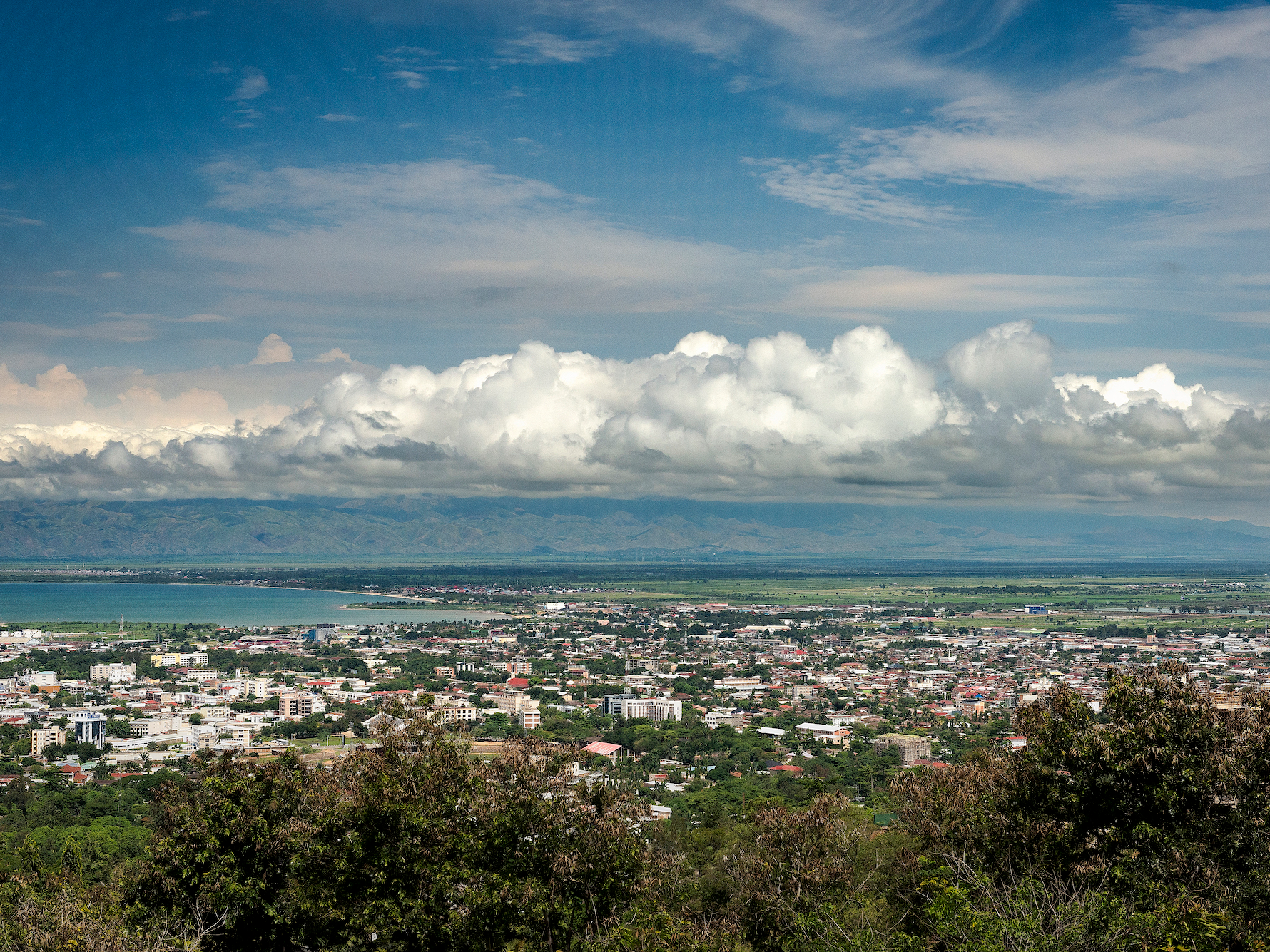 Burundi had a higher score than some of the other countries at the bottom of the rankings for complying with international norms. Burundi had a low score in biosecurity, although the reported noted that nearly 75% of the 195 countries studied also fared poorly on that metric. Eritrea had the second-lowest score in the rapid response to a pandemic category because of its lack of emergency response plans and operation centres, as indicated by a score of zero in the category’s sub-indicators. The country also has poor communication during emergencies. 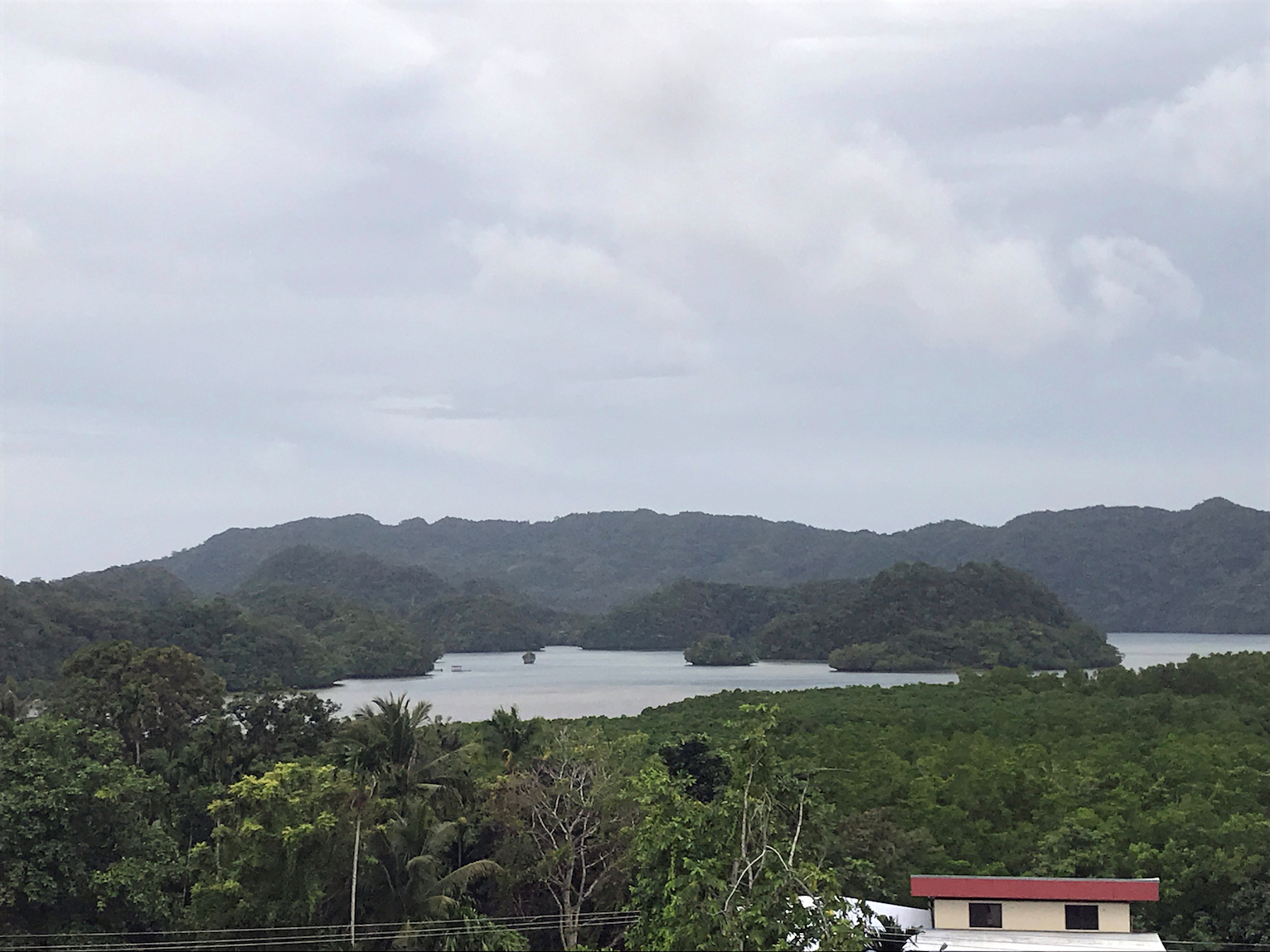 Palau had a overall risk environment score of 56.2, 1.2 points higher than the global average.

After publication of this article, the office of the President of Palau noted in an email to Business Insider that the country has taken steps to prepare for an epidemic. Press Secretary Olkeriil Kazuo emphasised Palau’s international agreements for disease control. He wrote,

“Palau relies on many of its highly-developed, regional allies, including the United States, Japan, South Korea, and Taiwan (which the 2019 report did not include), to provide the services that the report claims Palau lacks. Indeed, as has been recently demonstrated, Palau has emergency operation procedures that have been proven effective: it has been able to put in place a screening system for all passengers arriving at its international airport, to isolate patients with potential infections, and to obtain test results from multiple different laboratories (perhaps making it even better prepared than most countries). It also has procedures in place for medical evacuation to Taiwan and elsewhere if required.” 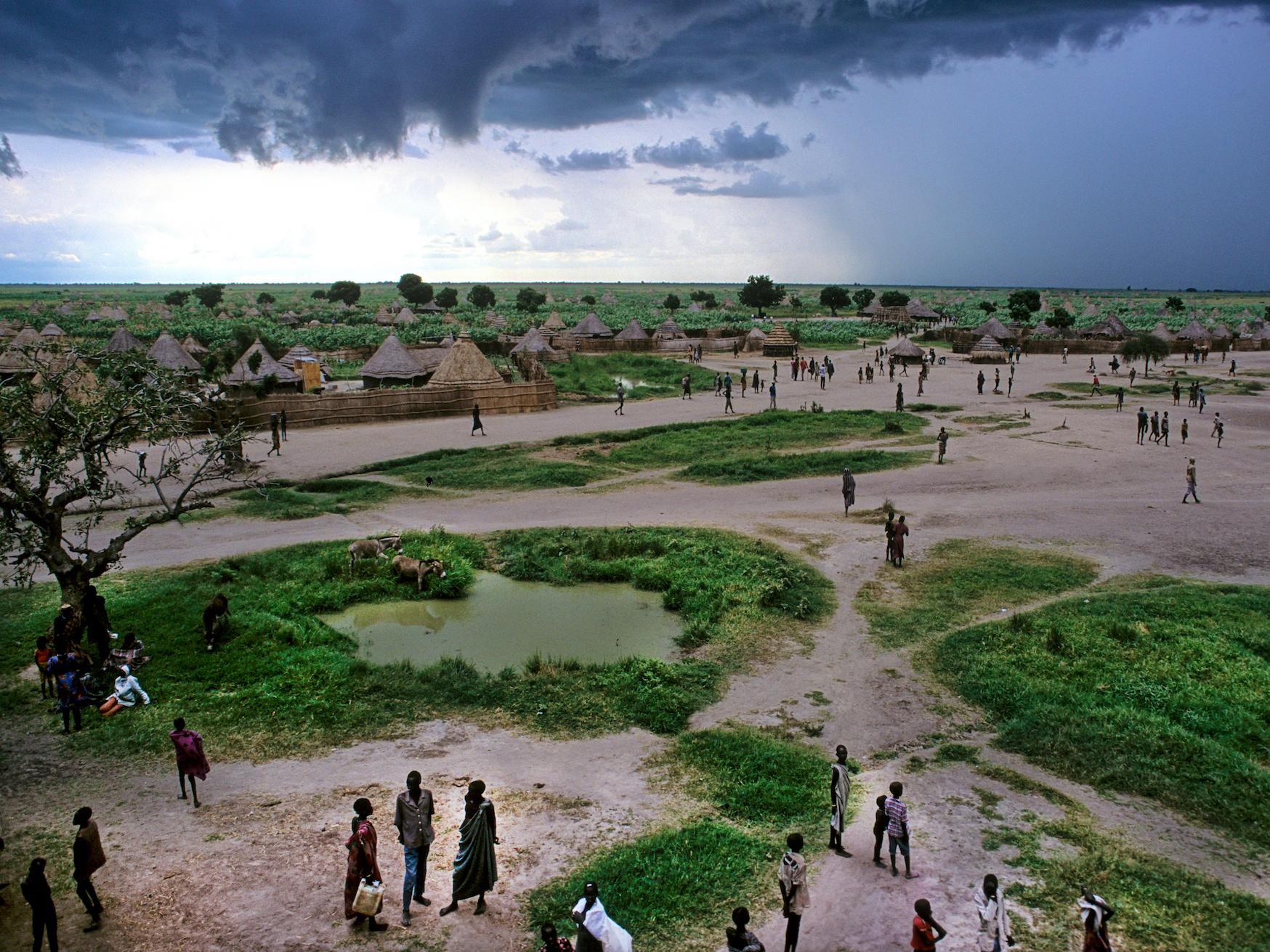 One of the reasons South Sudan is so low on the list is because of its overall risk environment score. It is the third-least prepared country for the overall risk category, and its score was brought down due to a lack of infrastructure adequacy and socio-economic resilience.

Although Tuvalu is ranked as one of the countries least prepared for a pandemic, Tuvalu did have a higher than average score for its overall risk environment.

The country does, however, have a poor health system and poor prevention measures for when an outbreak occurs. 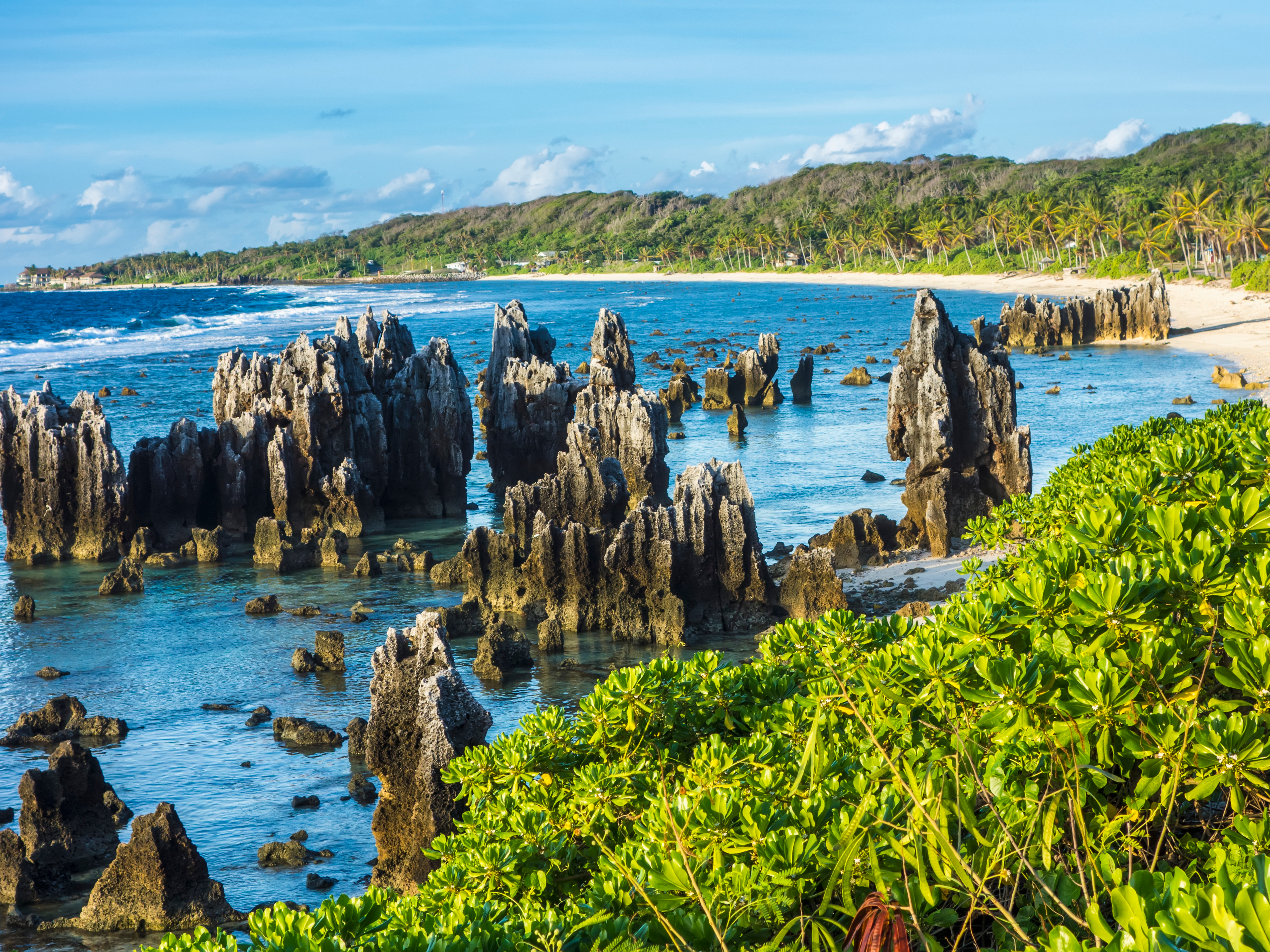 Nauru is one of the least prepared countries for detecting an outbreak early on, with an early detection category score of 4.4. 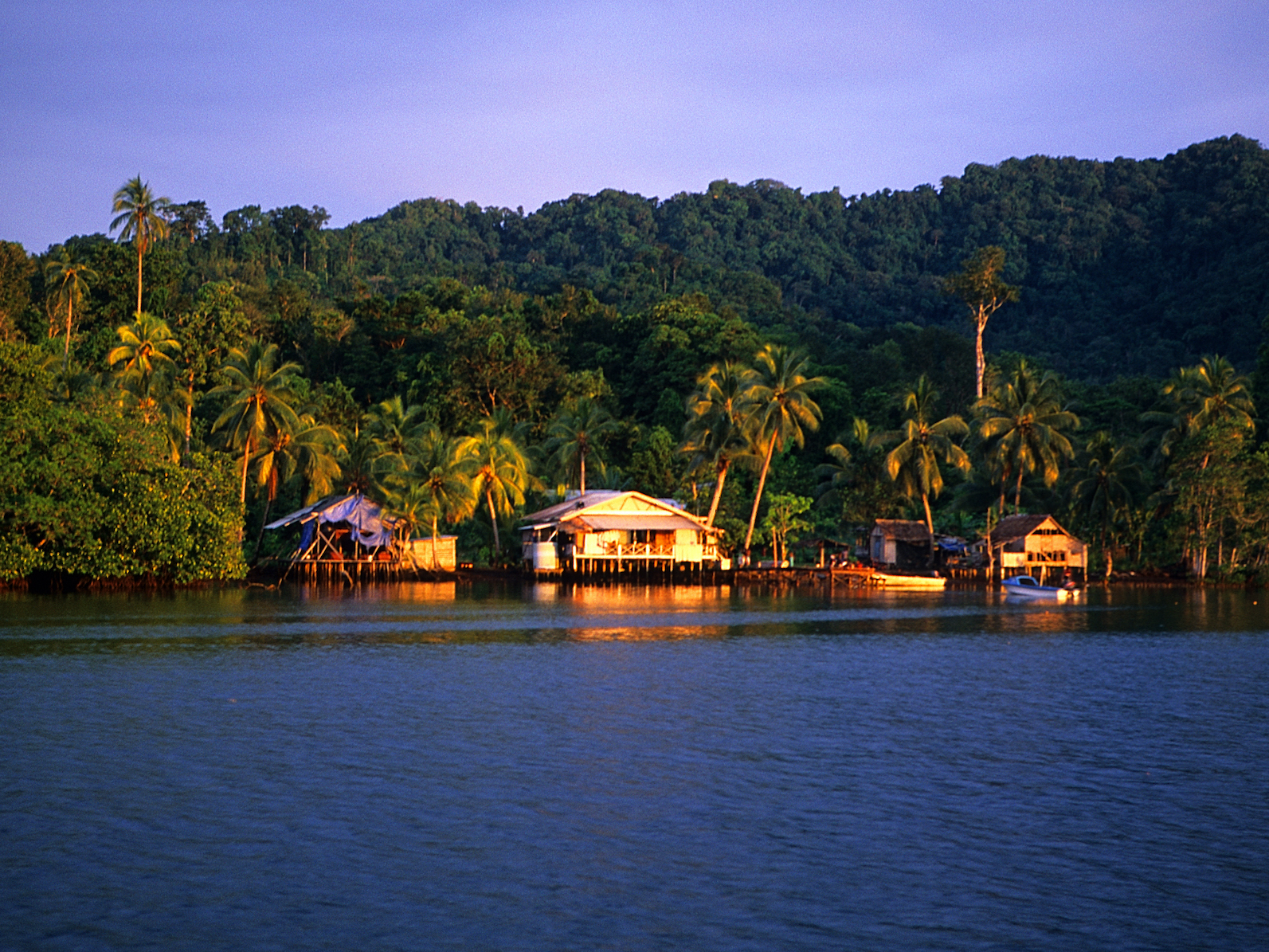 Solomon Islands’ compliance and risk environment scores were not too far off from the global average, and were both around 8-11 points below their respective averages. However, the country had low scores in several other categories. 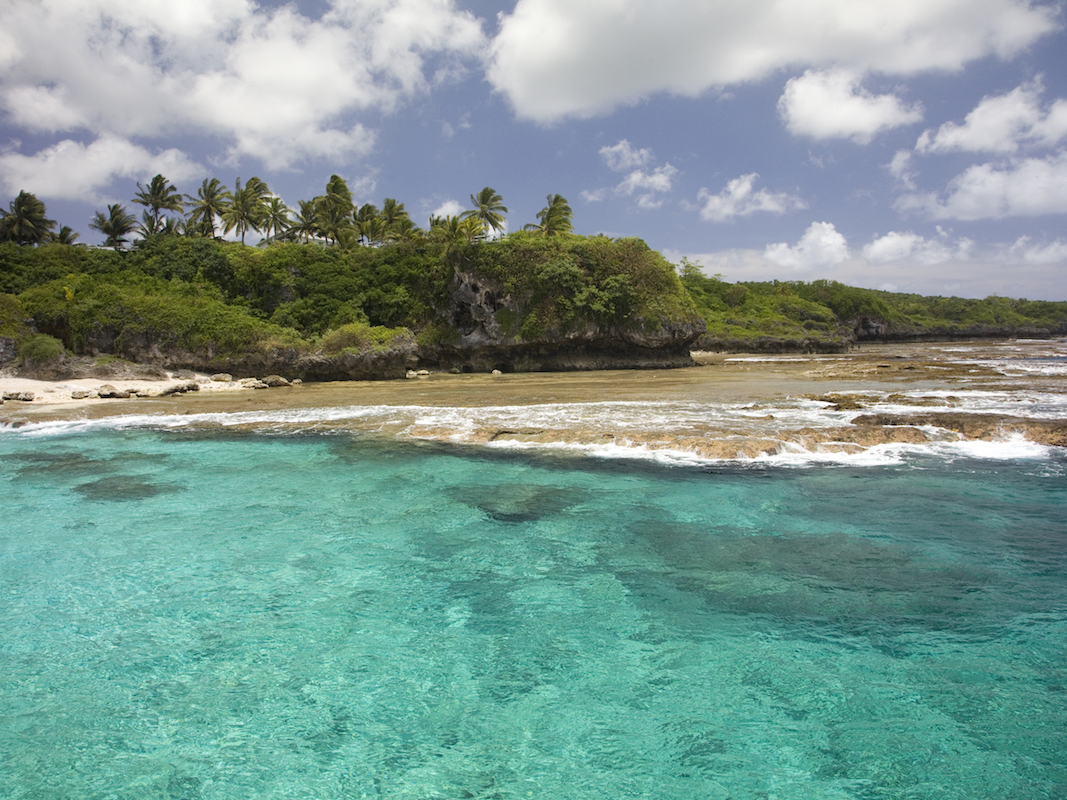 The country’s highest score was its rating for overall risk environment at 57.9, 2.9 points above the global average.

However, Niue’s lowest-rated category was its detection and reporting, with a score of 4.4. One of the reasons for such a low score is because the country does not have real-time surveillance and reporting of diseases, according to the report. Cook Islands had a low health system score at 14.3, around half of the global score at 26.4. It also was one of the bottom five countries for the rapid response category. Gabon has one confirmed case of coronavirus. The country has a poor healthcare system according to the report, with low scores for capacities in medical areas, equipment, and testing new procedures.

Although there have not yet been any reported cases of coronavirus in Gabon, the country is screening travellers and suspending travellers from China as a way to protect its community, according to The US Bureau of Diplomatic Security. Guinea-Bissau has the second-worst health system score at just 4.6, right behind Somalia.

The country performed poorly in all prevention-related subcategories except for vaccination rates, which brought the prevention category score to a 14.0, 20.8 points below the global average. 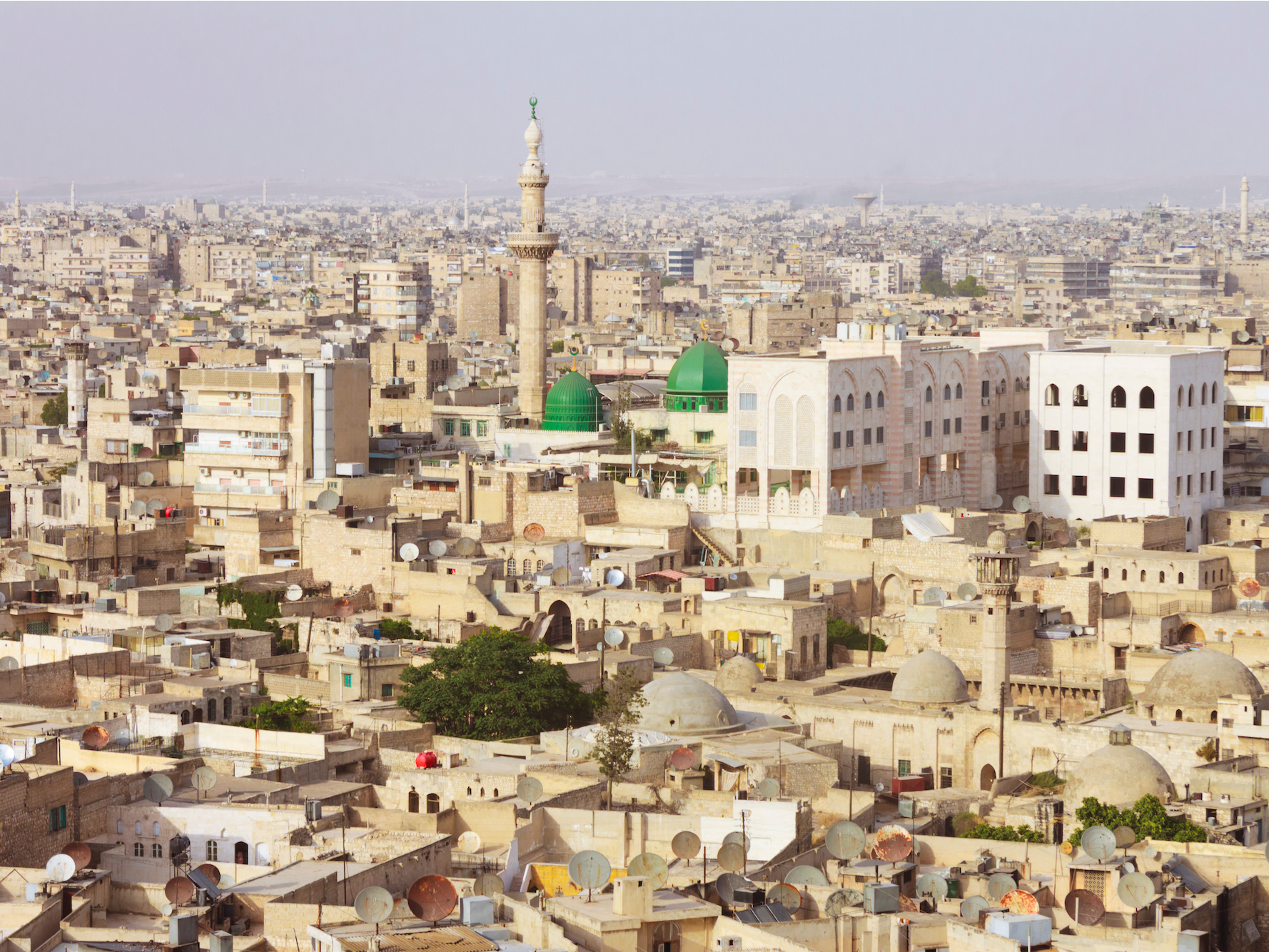 Like Venezuela, the report noted that gathering data from Syria was difficult, as the country has an ongoing civil war, which also lead to the country receiving the lowest score for political and security risks. It tied with Sao Tome and Principe as the least prepared country for early detection of a pandemic.

The report also noted that during the country’s civil war, there were poliovirus outbreaks but those were stopped with an “internationally supported vaccination campaign.” 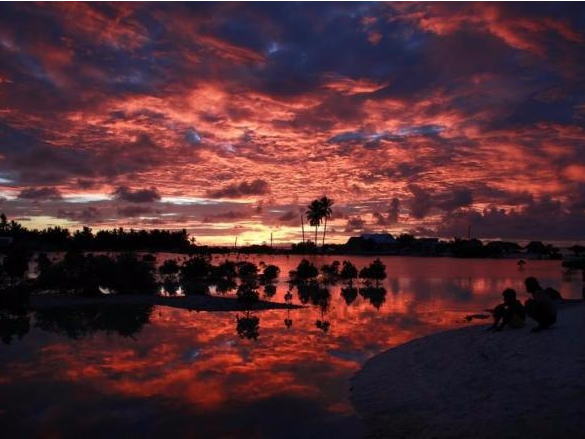 Among the major contributing factors to Kiribati’s low rank are its lack of real-time surveillance and reporting for disease, no national public health emergency plan for pandemics, and lack of equipment available for a health pandemic. The researchers gave the country a score of zero in each of these sub-indicators. 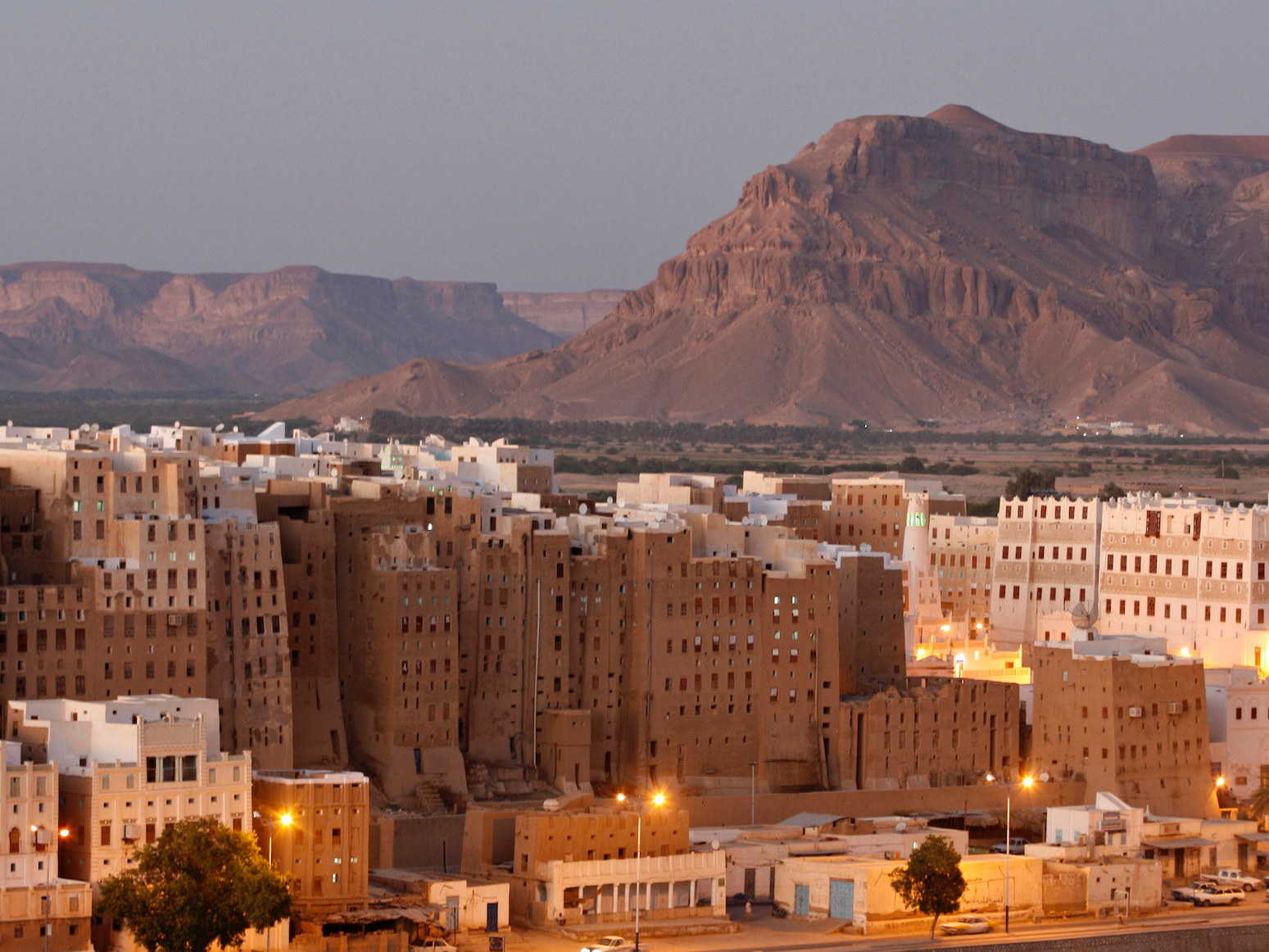 Yemen is ranked as one of the countries least prepared for an outbreak like coronavirus because of its already present issues for providing adequate living needs, such as food and water.

According to an article from the United Nations, 19.7 million people in the country need medical assistance and nearly 50% of “health facilities are not functioning or only partially functioning due to staff shortages, lack of supplies, inability to meet operational costs or limited access.” 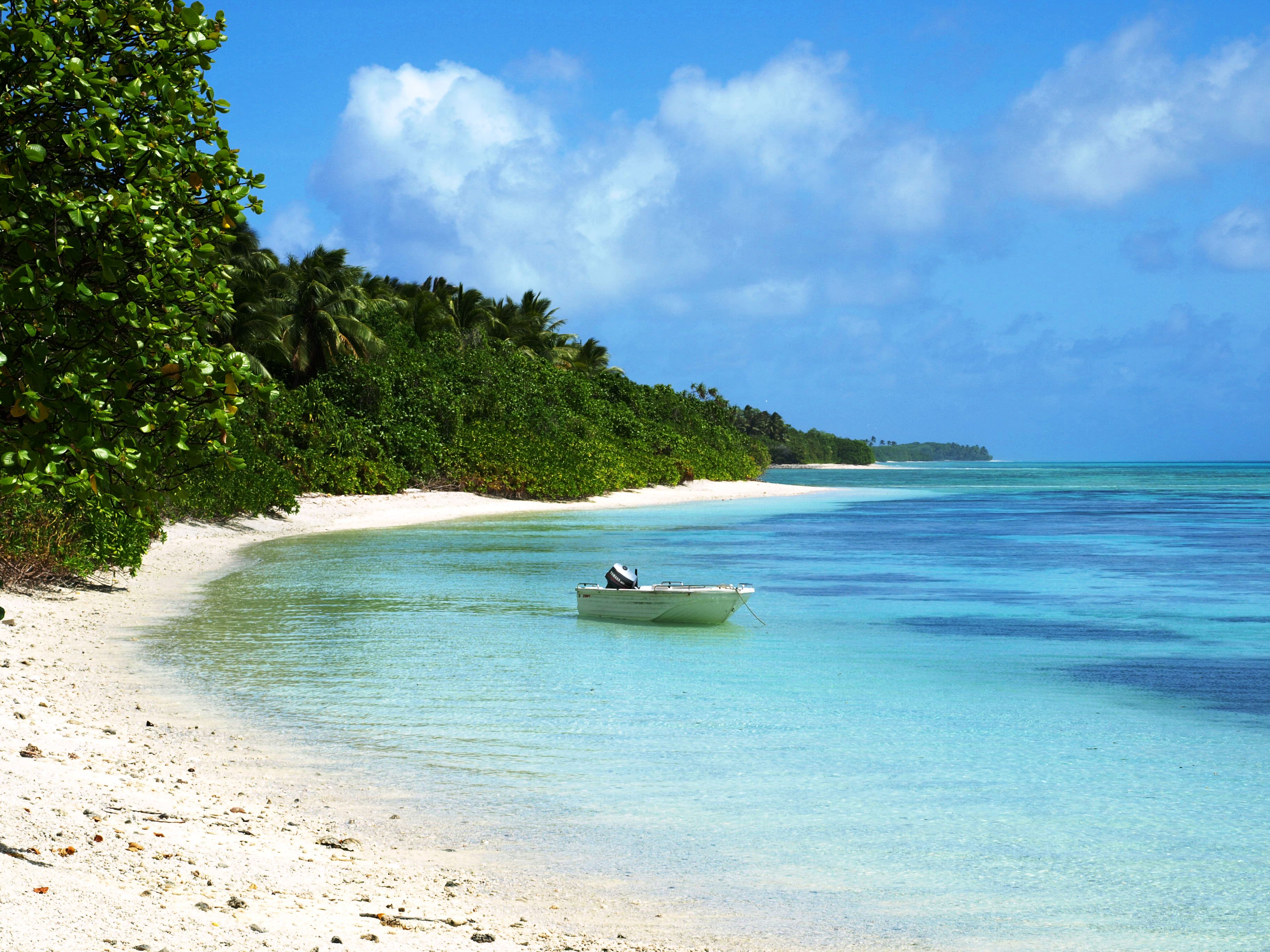 The Marshall Islands’ lowest scores were its health system and prevention of a pandemic categories, at 7.2 and 7.0 respectively. Sao Tome and Principe had the third-lowest scores in the prevention category. It also tied with Syria for the worst score in the early detection category. These low scores mean the country could be vulnerable to a major outbreak like coronavirus. 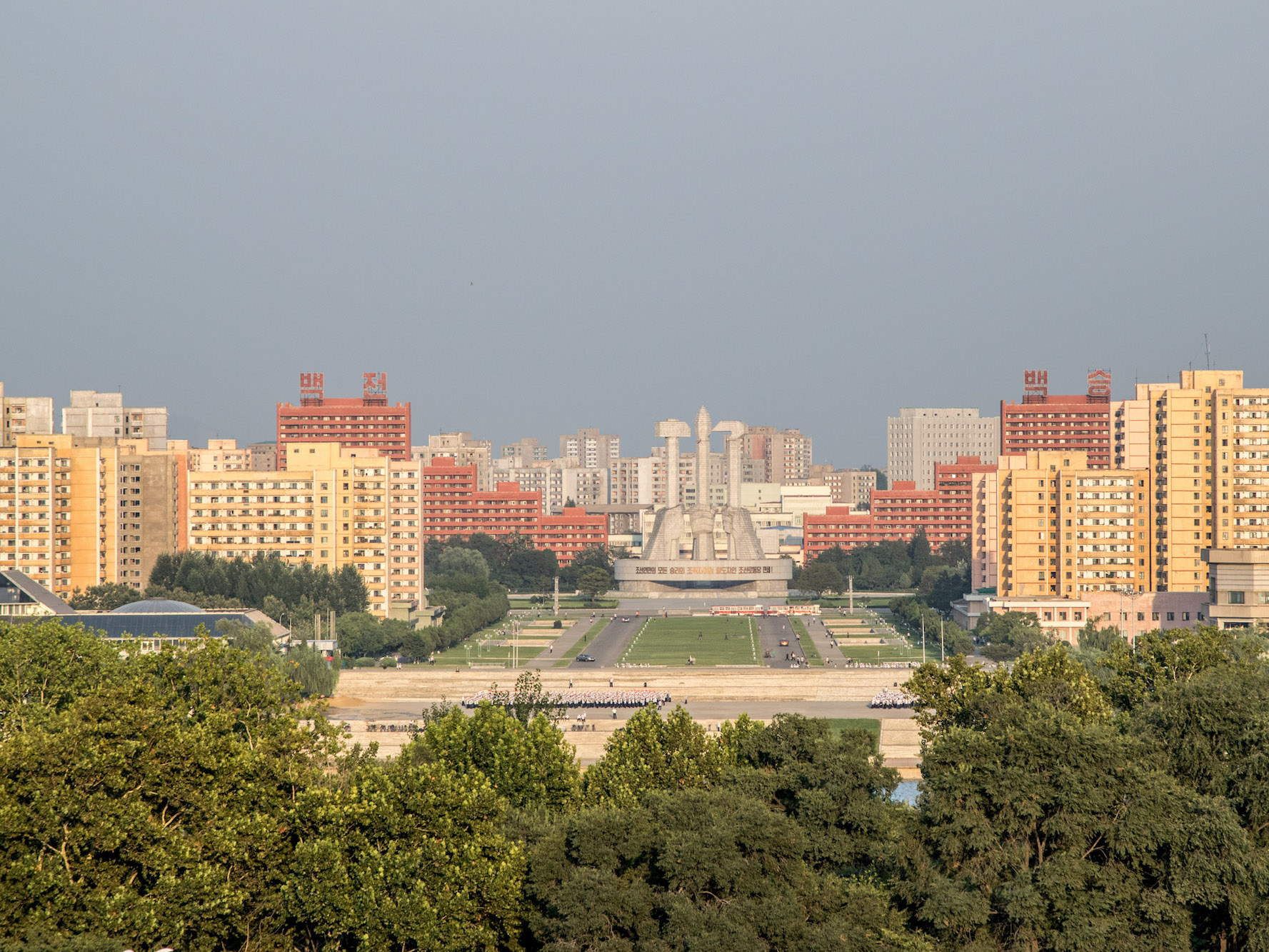 North Korea’s overall score was brought down by its low rating for rapid response to an epidemic, at 11.3. This is the worst rapid response score out of all the countries the researchers assessed.

Additionally, unlike many of the other least prepared countries in the report, North Korea had one of the lowest scores for compliance to international norms at 27.3. Somalia had the third-lowest score in the rapid response category at 17.4, 21 points below the global average. Equatorial Guinea was the least-prepared country for an epidemic, based on the health scores from the report. The country has one confirmed case of coronavirus after a woman returned from Spain, according to Reuters.

It has the worst score for prevention of pathogens and toxins with a score at 1.9, 5.1 points behind the next-lowest country’s score.

The country’s poor health system also makes it vulnerable if an outbreak like the coronavirus reaches its population.

An oil conference held in Equatorial Guinea has been postponed in light of concerns for the coronavirus, according to Africa Oil and Power website.