Photos show wildlife roaming freely as humans are on coronavirus lockdown, from 'bear parties' in Yosemite to lion naps on South Africa's streets 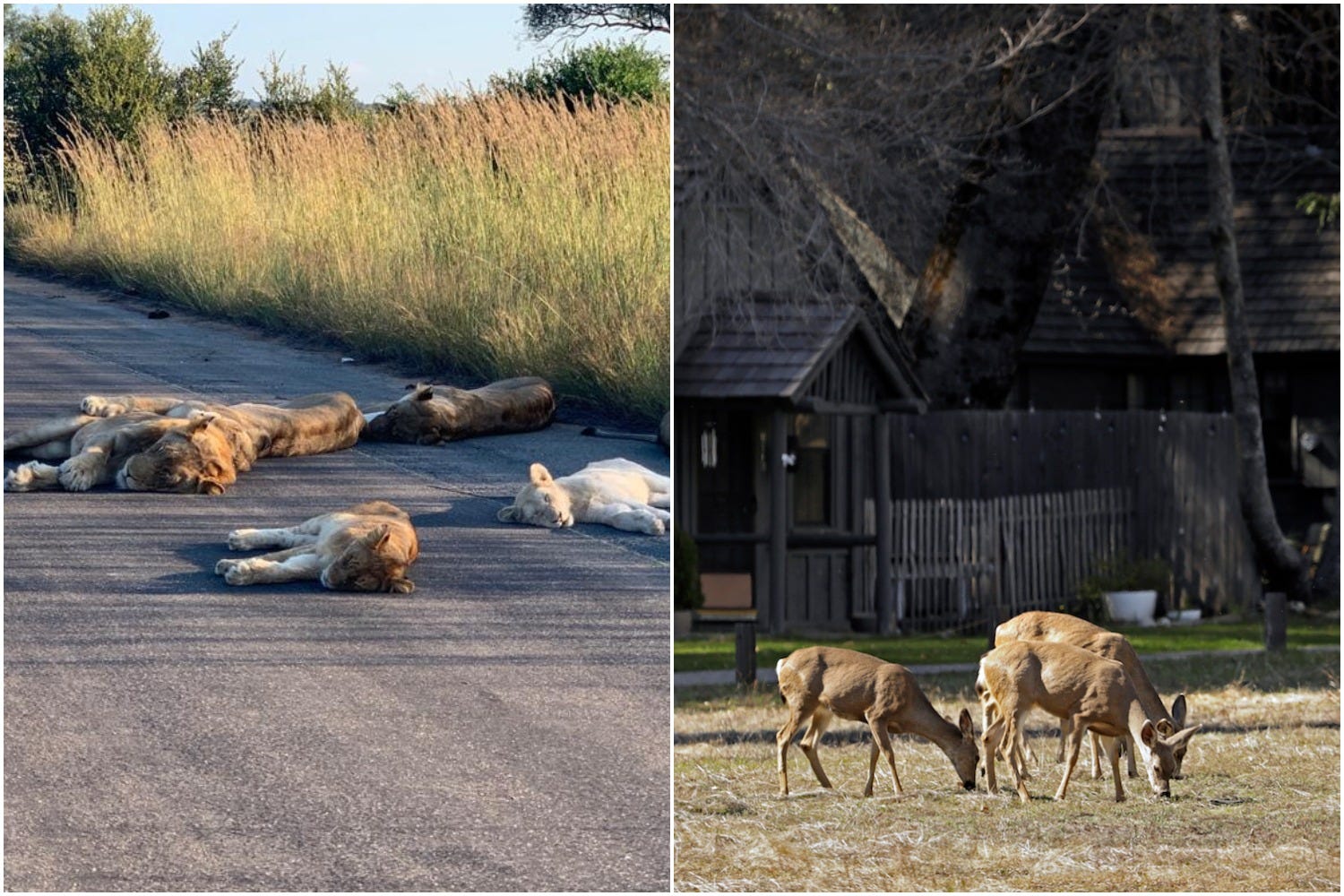 Getty ImagesA composite image of lions napping on a street in South Africa and deer feeding in Yosemite Valley in April 2020.

As the coronavirus pandemic forces millions of people to stay home and halt outdoor activities, wild animals are taking advantage of the peace and quiet to reclaim natural spaces and roam empty cities.

The global lockdown has also seen cities record drastic drops in pollution and air quality during the outbreak, though how this affects the long-term fight against climate change remains unclear.

From coyotes in California’s Yosemite National Park to wild boars on the streets of Israel, see how wild animals reemerging from their hiding spots, reclaiming natural spaces, and exploring their environs.

Wild animals have been taking advantage of the quiet streets during the pandemic, as millions of people are placed on lockdown and multiple national parks are shut.

Yosemite National Park in California has been closed to visitors due to the outbreak.

Black bears in particular have made more appearances than usual, with one ranger saying she thinks the bears are “having a party” since the park closed down.

Ranger Katie Patrick, a wildlife biologist who has worked with Yosemite’s black bears since 2007, said during a Facebook Live event on Sunday: “The bears are just literally walking down the road to get to where they need to go.”

Yosemite National Park is home to about 300-500 black bears. Though there hasn't been an increase in their population since the park closure, bears have been seen more frequently than usual. Check out this bear caught on camera yesterday, climbing a tree next to ranger housing! pic.twitter.com/9rXxIOMRbR

The park has around 300 to 500 black bears, according to the Los Angeles Times.

Yosemite National Park is usually teeming with tourists at this time of year, and many animals never emerge because there can “literally be walls of cars, stop-and-go traffic or people in the park,” the ranger said.

Around 4.4 million visited Yosemite National Park in 2019, according to CNN.

In South Africa’s Kruger National Park, a pride of lions was caught snoozing on a street by one of the park’s lodges.

Kruger spokesman Isaac Phaala told the BBC that the lions, which usually sleep in the bushes, are “very smart and now they are enjoying the freedom of the park without us.”

The park has been shut since March 25, CNN reported.

Here’s another view of the tarmac, which has now been occupied by at least eight lions. Park rangers say they apparently liked lying on the road because it was dry.

Wild animals are even invading cities, like these boars causing distress in a residential area in Haifa, Israel.

Even though wild boars usually come out by night, an increasing number of them have been seen roaming the streets by day. Israel has been locked down since April 7.

Meirav Litani, a music instructor, told Reuters: “We are scared to go out, even to throw out the garbage. I don’t which way the boars will come.”

Residents now rely on “pig patrols”, which are made up of volunteer animal-rights activists who shoo the boars away.

In the last few weeks, all sorts of animals have been seen strolling through streets around the world, like these shaggy mountain goats seen walking through a town in Wales in late March.

Another positive impact the lockdown has brought on the natural world is cleaner air. Major cities like Los Angeles and New Delhi have witnessed huge drops in their air pollution levels.

Halting certain industries like travel as well as limiting social gathering has led to a change to pollution and air quality.

Some environmentalists say that the reports of reemerging wildlife are proof that humans have put too much pressure on the natural world.