A supercomputer found a promising theory about why COVID-19 cases go downhill fast. It even explains the bizarre range of symptoms. 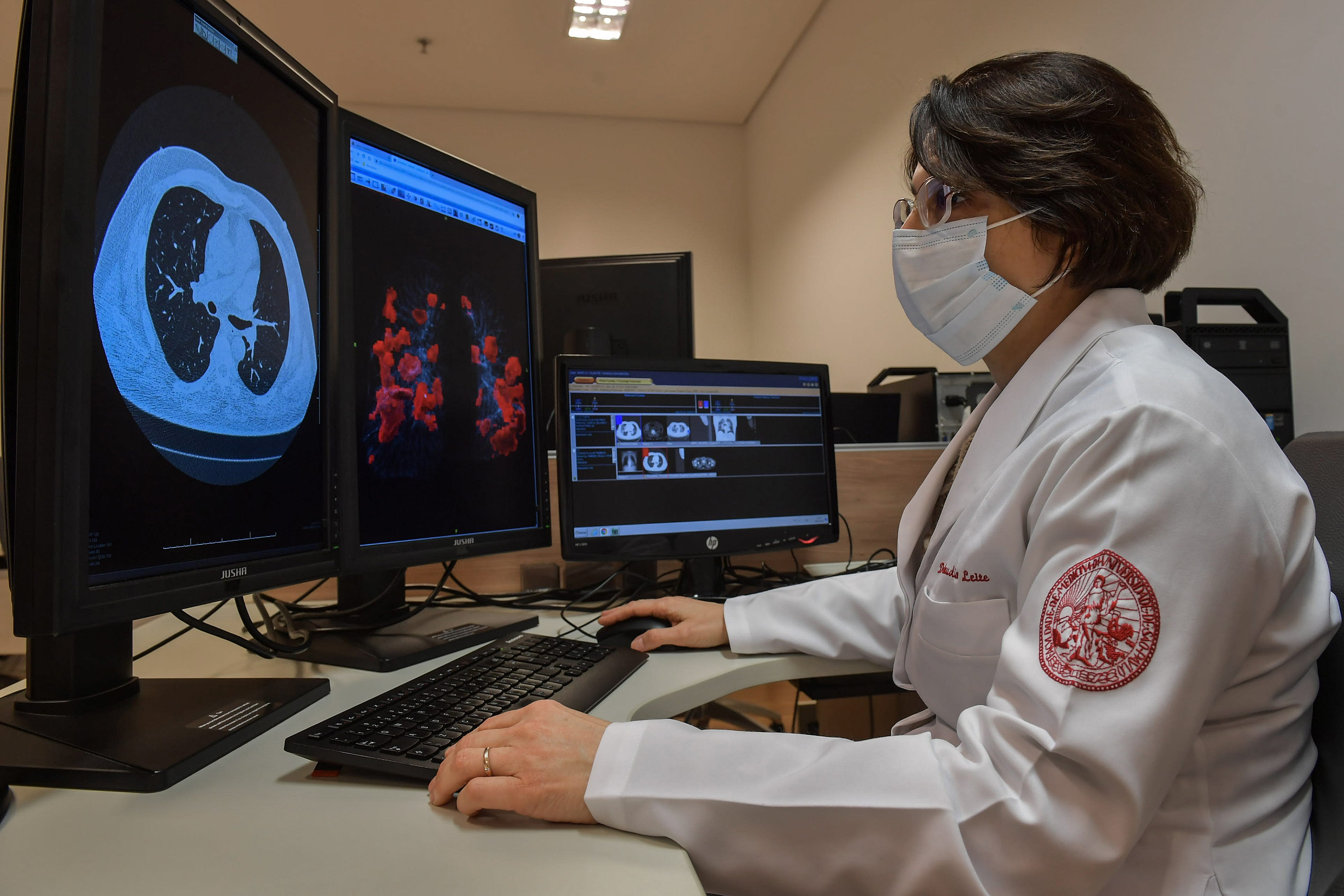 Imagine trying to drive a car with a leaky engine. Now imagine there are no brakes, either. Eventually, you’re going to run out of fuel or crash. Some passengers might survive â€” others won’t.

The human body may endure a similar experience in response to a coronavirus infection, according to a study from researchers at the Oak Ridge National Laboratory in Tennessee. The lab’s supercomputers â€” one of which is the second-fastest in the world â€” analysed lung fluid samples from nine coronavirus patients with severe cases in Wuhan, China.

The computers detected major differences in way these patients expressed certain genes relative to the way healthy people do.

Based on those abnormalities, the researchers came up with a new theory: Patients with severe COVID-19 may experience what’s known as a “bradykinin storm.”

Bradykinin is a chemical that regulates blood pressure. The researchers found that some people with the coronavirus may produce it in extreme excess. That storm throws major systems â€” including respiratory, gastrointestinal, and neurological pathways â€” off balance.

The theory aligns with researchers’ growing view of the coronavirus as a vascular disease instead of a respiratory one.Research has shown that COVID-19 can lead to blood clots, leaky capillaries, and inflamed blood vessels â€” which is why some patients may experience heart damage or stroke.

“We were really scratching our heads for a while, how does this disease have this darn broad set of symptoms across lots of different organ systems?” Dr. Daniel Jacobson, the lead researcher behind the supercomputer study, told Business Insider. “As we looked at the effects of bradykinin, our model was that this virus can affect several different types of tissues, several different organs.”

Too much bradykinin can send the body spiraling out of control

Scientists already know that the coronavirus binds to cell receptors called ACE2. That’s how the virus sneaks into the body’s upper respiratory tract, then infects organs like the lungs, heart, kidneys, or intestines.

But the supercomputers found that coronavirus patients had a 200-fold increase in the expression of ACE2 relative to a healthy person. This suggests the virus is actively influencing our bodies to make them even easier to infiltrate. At the same time, the computers found, coronavirus patients also had an eight-fold decrease in the expression of ACE, a protein that normally works with ACE2 to keep blood pressure in check.

“This system that is normally very carefully balanced â€” COVID-19 really throws it out of whack,” Jacobson said.

This imbalance, the researchers think, is what leads to the over-production of bradykinin, which swoops in to keep blood pressure from getting too high. In severe cases, the cycle seems to go into overdrive: The body can’t stop producing bradykinin. This is what researchers call a “bradykinin storm.”

An excess of the chemical widens the gaps in blood vessels, which allows fluid to leak out. That fluid, in turn, starts to fill up the alveoli: tiny air sacs in the lungs â€” hence why patients have trouble breathing.

The supercomputers also found that coronavirus patients may over-produce a highly absorbent substance called hyaluronic acid. When the acid mixes with the fluid in the lungs, patients can feel like they’re trying to breathe out of “a balloon full of Jell-O,” Jacobson said.

“There may be a tipping point where enough of this hyaluronic acid builds up, then all of a sudden they have respiratory distress,” he added. “That explains why some people seem to be doing fine and then they crash and all of a sudden need hospitalisation or worse.”

An explanation for the wide range of COVID-19 symptoms

The bradykinin theory offers a surprisingly cohesive explanation for why COVID-19 infections can result in a broad spectrum of symptoms. Though the disease has certain hallmarks â€” a fever, dry cough, and shortness of breath â€” patients have reported a range of cardiac, gastrointestinal, and neurological problems.

“Everywhere we go in the body and look at the symptoms being reported, they map pretty well to exactly what you’d expect to see from bradykinin,” Jacobson said. 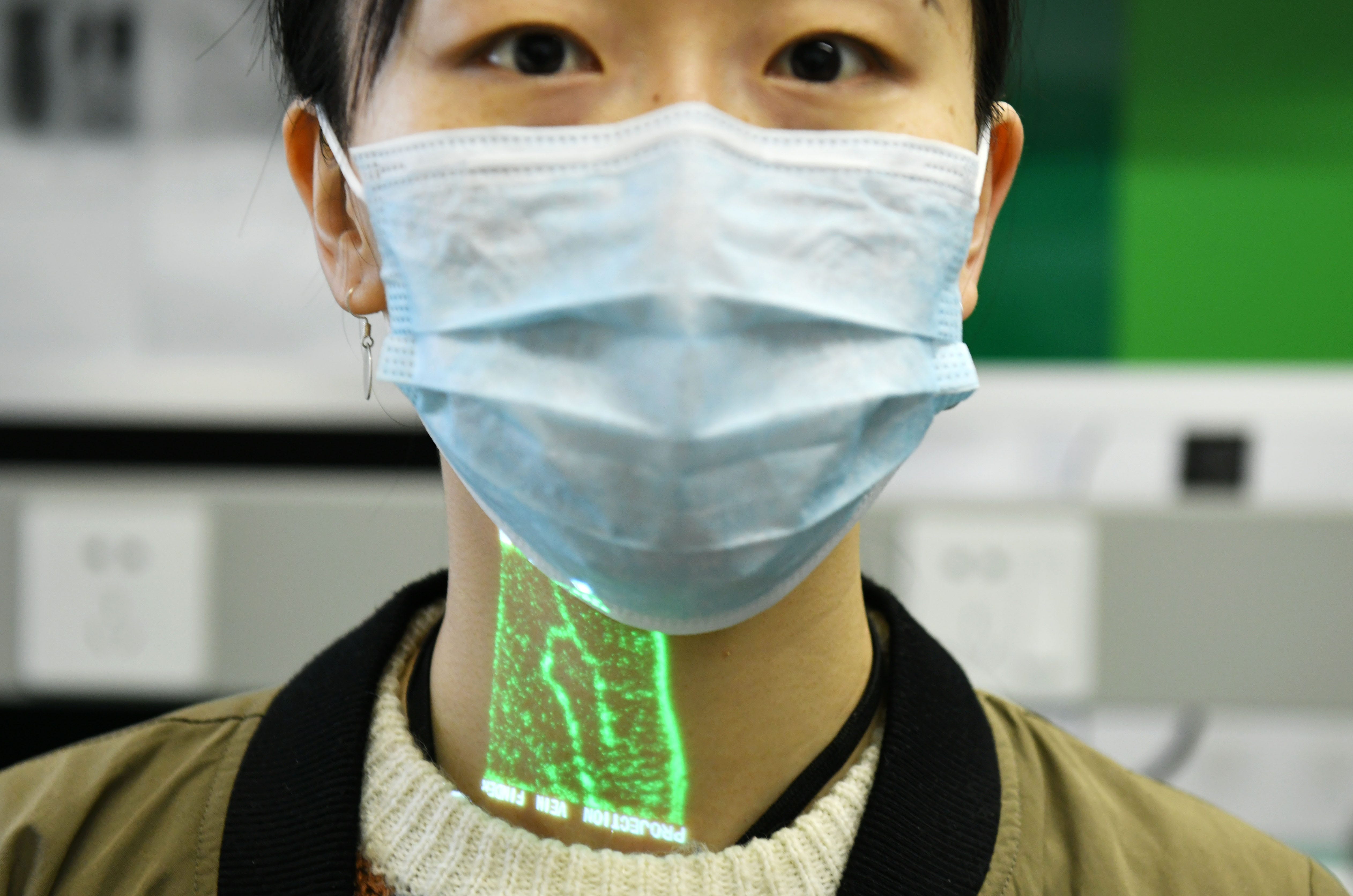 A bradykinin storm could cause fluid to leak from the blood vessels in the brain, which would explain neurological symptoms like dizziness, headaches, fogginess, and confusion that some patients experience. It can also trigger swelling, pain, and inflammation in the body â€” which can result in muscle soreness and body aches, now known to be common COVID-19 symptoms. That could even lead to purple, swollen toes.

What’s more, Jacobson said, a loss of taste or smell is a classic response to decreased levels of ACE receptors. Lower levels of ACE have also been linked to a dry cough and fatigue.

Furthermore, the increased production of hyaluronic acid may explain why some asymptomatic patients have abnormal lung scans, Jacobson added.

“There’s probably damage being done in people who feel fine otherwise,” he said.

In May, Michigan researchers hypothesised that a bradykinin response could lead to life-threatening respiratory complications in some COVIDâ€19 patients. A study published the month prior also proposed that the body’s bradykinin response was to blame for leaky blood vessels observed in the lungs of COVID-19 patients.

The researchers behind that work suggested that a drug called icatibant, which blocks the body’s signal to produce bradykinin, could help treat infected patients. A follow-up study showed that four of nine patients who received the drug no longer needed oxygen support after 10 to 35 hours. The drug also had no severe adverse effects. But the study was too small to yield any significant conclusions.

Jacobson’s study, meanwhile, found evidence that vitamin D might hinder a bradykinin storm from developing in the first place. Studies have already shown that Vitamin D could help reduce the severity of COVID-19 infections. 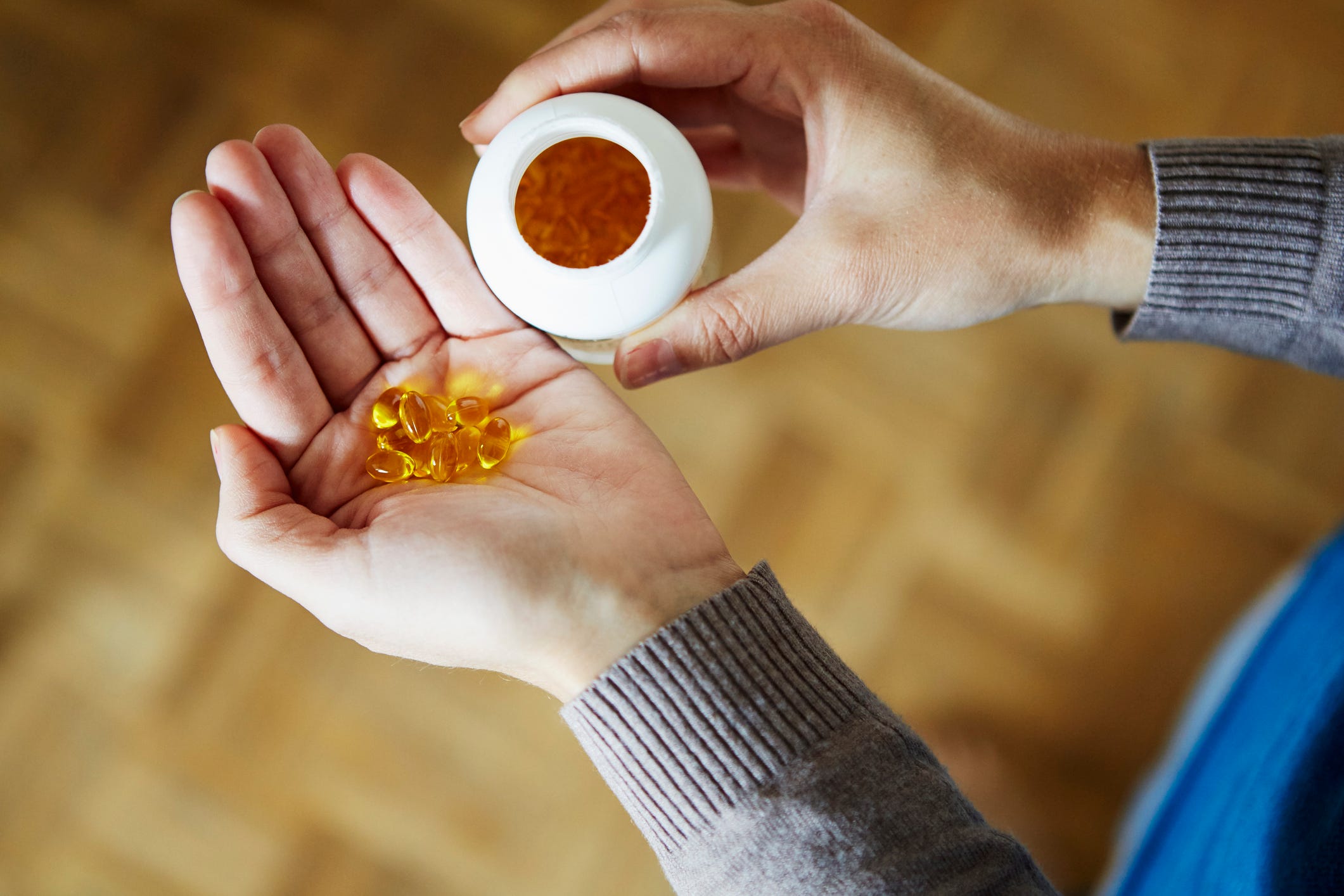 His study also supports the idea that corticosteroids can improve survival rates for COVID-19 patients. Bradykinin receptors activate an enzyme called phospholipase A2, which is inhibited by steroids. The World Health Organisation issued a “strong recommendation” for the use of steroids among seriously ill patients last week.

A competing hypothesis: the cytokine storm

Previously, some scientists suggested that a different internal “storm” could be behind people’s severe reactions to the coronavirus: a cytokine storm. That release of chemical signals, when it goes into overdrive, can instruct the body to attack its own cells. This response was also observed in patients who died of H1N1, SARS, MERS, and the 1918 Spanish flu.

Jacobson said a cytokine response could produce some COVID-19 symptoms, but it’s probably not as “stormy” as researchers once thought.

“That hypothesis is losing a little bit of traction,” he said. “We’re not saying they’re not linked. I think they are. It just doesn’t look like the full-blown cytokine storm is completely supported by data.” 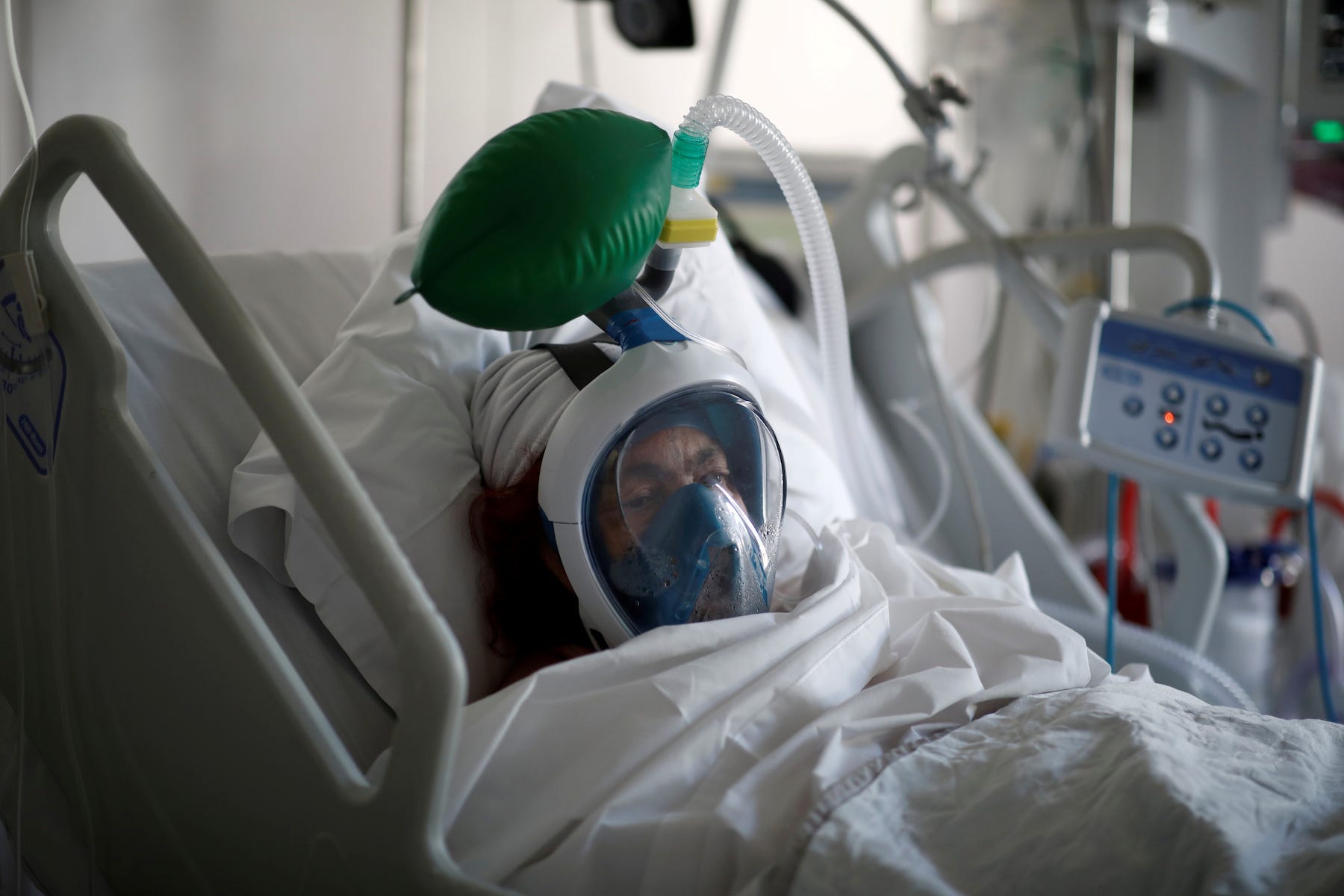 REUTERS/Benoit Tessier/File PhotoA patient suffering from coronavirus disease wears a snorkelling mask converted into a ventilator in Paris on April 1, 2020.

So far, the medical community has approached the bradykinin theory with cautious optimism.

“To be honest, I’m worried that this proposal is almost too neat and form-fitting,” Derek Lowe, a medicinal chemist, wrote in Science Magazine. “Rarely do you get something that falls together this well.”

Still, he added, the findings are “pretty plausible.”

Jacobson said his team hopes to do more follow-up studies to test the theory, including studies involving long-haul coronavirus patients who have been sick for several months.

“I have a couple of long haulers on my team, so this is really near and dear to our hearts, and we’re seeing it play out in real time,” he said.

The bradykinin theory might play in there, too: Jacobson’s team thinks that once that storm takes off, it could continue until the body figures out how to reset it. But it’s still unclear whether any available treatments would make a difference for long-haul patients.

“That’s part of the joy of science,” Jacobson said. “For every answer you have, it raises 10 more questions.”