A grocery store says it threw away an estimated $35,000 worth of fresh food after a woman coughed over everything as a 'twisted prank' 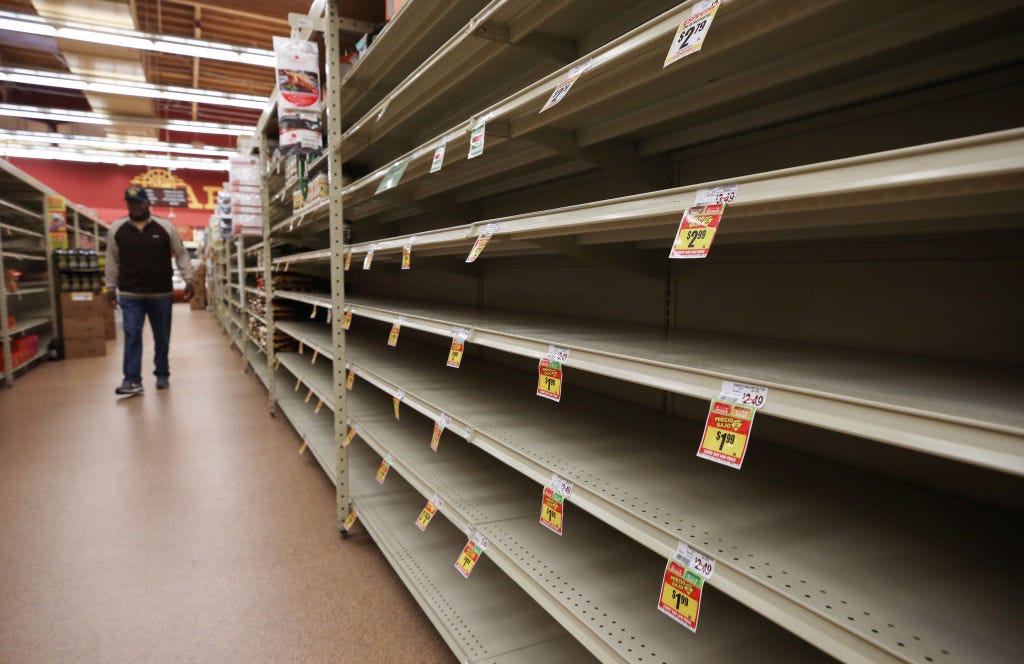 Getty/Mario TamaWhile some stores, like this Los Angeles supermarket, have experienced empty shelves because of panic buying, others like Gerrity’s had briefly empty shelves after having to throw food away.

A Pennsylvania grocery-store chain says it was forced to throw away “well over” $US35,000 worth of fresh food after a woman “purposely” coughed over various different products.

Joe Fasula, a co-owner of the supermarket Gerrity’s, wrote a lengthy Facebook post Wednesday explaining what had happened.

“At 2.20 p.m. today, I got a call from our Hanover Township store. The manager informed me that a woman, who the police know to be a chronic problem in the community, came into the store and proceeded to purposely cough on our fresh produce, and a small section of our bakery, meat case, and grocery.

“While there is little doubt this woman was doing it as a very twisted prank, we will not take any chances with the health and well-being of our customers.”

Fasula said the store worked with the Hanover Township health inspector to identify every area of the store the woman was in, thoroughly disinfecting everything and disposing of all the food with which she came into contact.

Gerrity’s owners expect the total loss to be “well over” $US35,000, Fasula wrote, and they’re unsure whether their insurance company will cover the cost.

“I am also absolutely sick to my stomach about the loss of food,” Fasula wrote. “While it is always a shame when food is wasted, in these times when so many people are worried about the security of our food supply, it is even more disturbing.”

Fasula wrote that Gerrity’s was working with the local district attorney’s office, which Fasula said would “be aggressively pursuing numerous charges” and endeavouring to test the woman for the coronavirus.

“The only silver lining to this travesty is that it gave us the unfortunate opportunity to test our protocols and demonstrate how seriously we take your safety,” Fasula added. “At one point, we had over 15 employees involved in the disposal and clean up.

“I would like to thank every member of our organisation who pitched in today to help, especially those of you who came in on your day off and those who stayed late.

“I would also like to thank the people who will be going in early tomorrow to get the departments restocked. One thing is for sure, we will have the cleanest display and freshest produce anywhere in northeast PA.”

Just a day later, the supermarket was back on its feet with what appeared to be a particularly clean display of fresh produce, judging by the photos posted on Facebook.

“Our produce department was fully stocked by 2 p.m. today (Thursday),” Fasula wrote. “Thank you to everyone who worked so hard to get everything back to normal. I’ve included pictures of the final result below. Outstanding job!!!”