What rebound? These 2 charts suggest the recent stock sell-off has further to go Despite a widespread stock rebound on Wednesday, the market’s recent plunge into correction territory still hasn’t come close to finding a bottom, according to new research from RBC Capital Markets.

All major US equity indexes climbed more than 1.5% at intraday highs, paring some of the losses seen Tuesday after the Federal Reserve’s emergency rate cut failed to alleviate investors’ coronavirus fears. The whipsawing action followed gains of roughly 5% for US stocks on Monday.

Tuesday’s lack of positive response to the Fed cut serves as a “good reminder” that investors are still wary of the outbreak’s economic toll, and several critical factors suggest bearishness is far from its peak, RBC analysts led by Lori Calvasina wrote Wednesday.

Read more: 2 Wall Street firms lay out scenarios for a coronavirus-fuelled recession – including how far stocks will ultimately plunge

She cites data showing fund manager sentiment that’s “still in euphoric territory” despite a recent decline. Calvasina also notes that bearish readings remain significantly below past highs, even though they have jumped.

RBC argues that until these two measures weaken further, the stock market is still at serious risk of more selling. Here are two charts detailing the analysts’ hypothesis and the extent to which market pessimism can still grow:

Asset managers are sticking to stocks 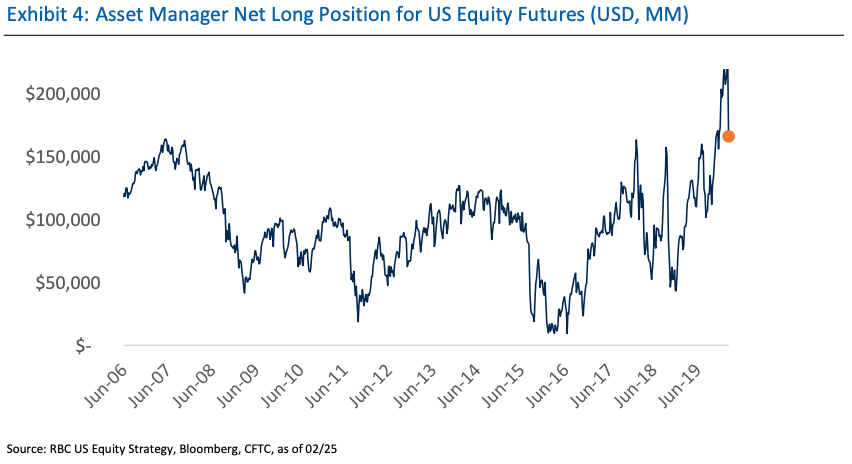 US stocks posted their worst week since 2008 to close out February, yet the sell-off left plenty of investor dollars parked in equities. RBC’s chart only includes data from the first two days of the week-long tumble but by the end of Tuesday’s session, positions in stock futures stood in line with July 2019 levels.

The trend is “a testament to how extreme bullishness had become” in the run-up to the market correction, RBC’s analysts wrote. Long positions likely dropped further as the selling surged through the end of the month.

Yet swaths of wealth remain held in stock futures and could drive further losses if sentiments worsen.

Bearishness has room to run 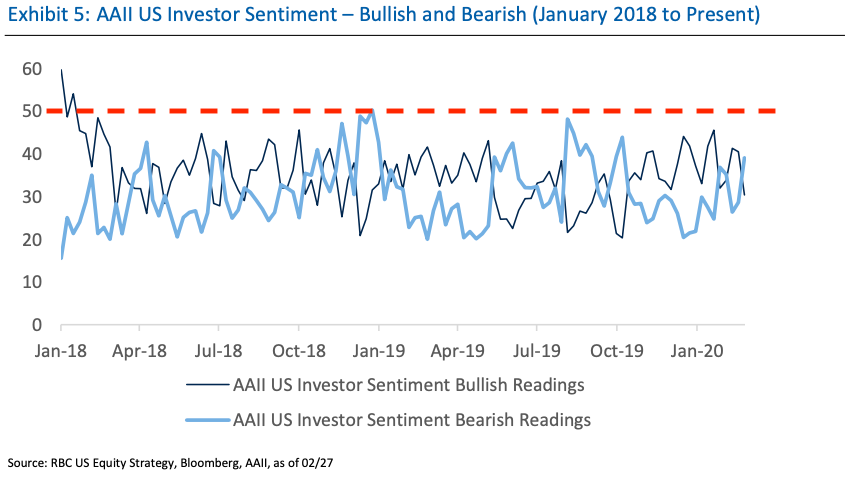 The analysts also cited sentiment data from the American Association of Individual Investors to see where market pessimism sat in its historic range. The latest survey revealed bearish sentiments rising to 39% as of February 27, surpassing market optimism amid a spike in market volatility.

The indicator jumped as high as 45% following both the 9/11 terrorist attacks and Russia’s financial crisis in 1998.

The 2008 financial crisis saw bearish ratings fluctuate within the low 60s for months before spiking to 70% around March 2009’s market low.

Bearishness would need to reach the mid-40s “before it makes sense to start considering whether a bottom has been put in place,” the analysts wrote.

‘One of those once in 100 years catastrophic events’: Billionaire Ray Dalio says the coronavirus will ‘annihilate’ select parts of the market – and warns that further emergency rate cuts will be futile


A leaked Target email urges store managers to carry on business as usual while coronavirus fears create a ‘scary, stressful’ time for employees