One of the most bizarre and brutal sports on earth is still going on in Australia despite the coronavirus. Here's everything you need to know about elite Aussie rules football. 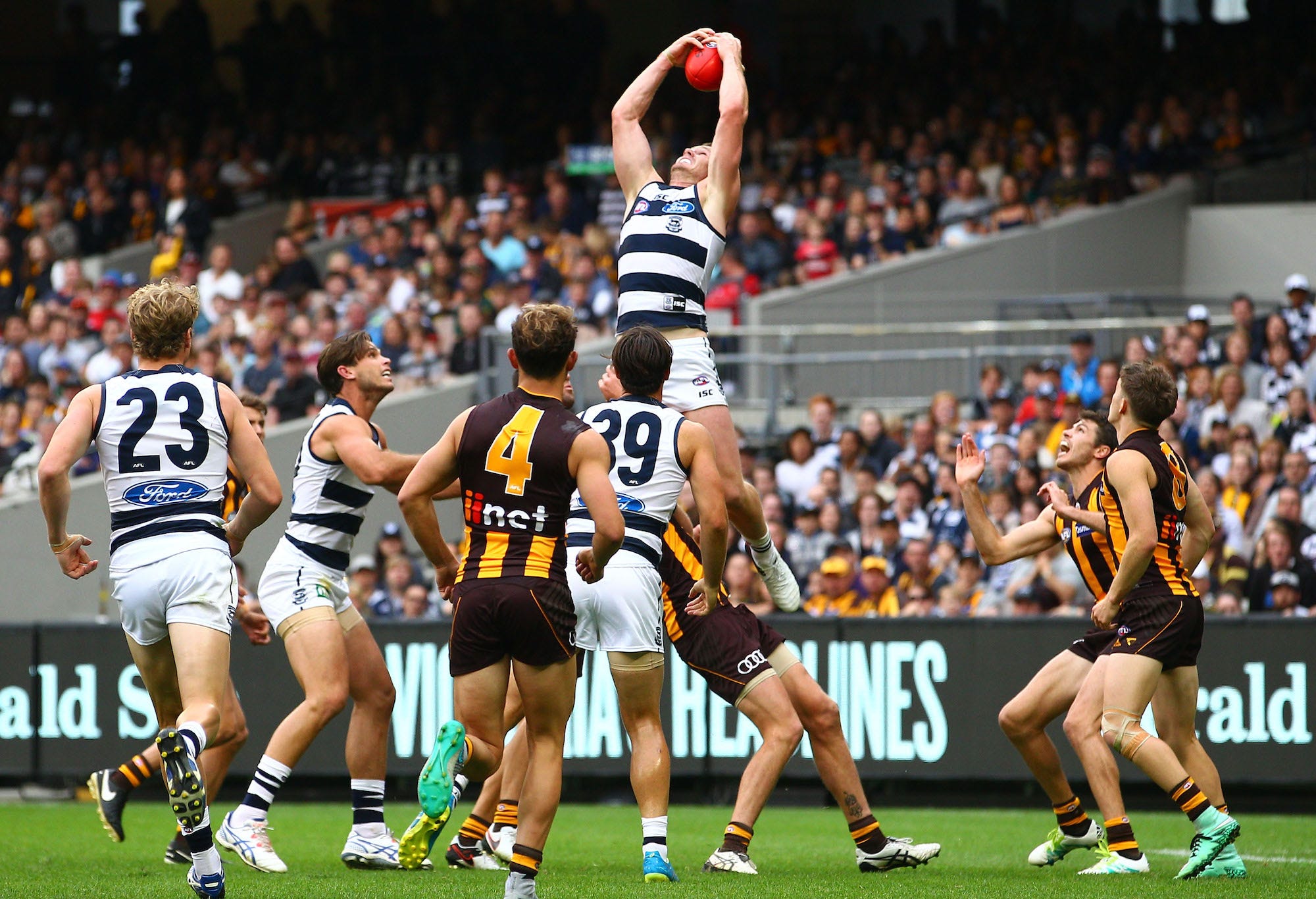 Getty/Scott Barbour/AFL PhotosThe Geelong Cats and the Hawthorn Hawks in 2016.

The coronavirus pandemic has brought most sports across the world to a halt.

In the furthest corner of the globe, however, one of the world’s most brutal and bizarre sports is still going strong: Australian rules football.

Aussie rules, as it is known, is unlike pretty much any other sport on the planet. Think rugby union meets American football meets Quidditch, but without the pads and the brooms.

Founded in 1857, the game was invented to help the country’s cricketers keep fit during the winter, according to Dscribe.

Today, however, the sport is Australia’s most popular and attracts crowds of up to 120,000. The Australian Football League says it has the fourth-highest average attendance of any domestic sports league.

Read on to find out about the sport and its best players and teams as well as how, when, and why you should watch it.

So what are the rules of Aussie rules? 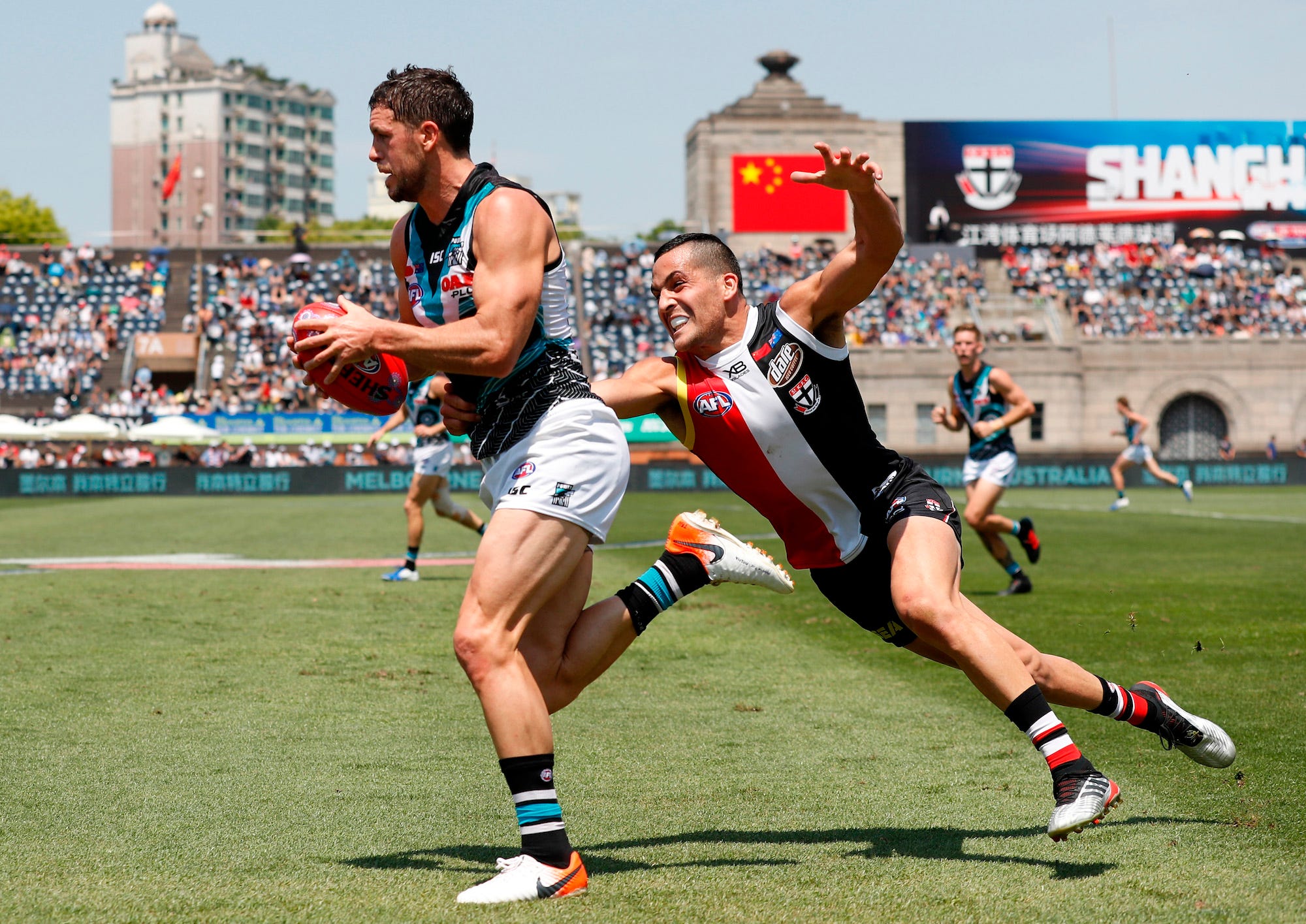 Played on a huge oval-shaped pitch, Aussie rules sees two teams of 18 players go against each other for 80 minutes to see which can score the most points.

Points are scored by kicking the ball through the two large upright posts at each end of the field. Doing this scores a team six points.

Outside the main posts are two shorter posts. Hitting one of the posts or kicking it between a main post and a smaller posts is worth only one point.

Players can move the oval-shaped ball around the pitch in three ways. They can run with it, but, a bit like basketball, they must bounce it every 16 yards. They can also “punch” the ball forward using their fists, which is known as a handball.

Finally, and most common, players can kick the ball.

If a player kicks the ball to a teammate from at least 16 yards away and he catches it, it is called a “mark.” From here, the team can continue to try to get closer to the posts or take a shot at goal.

Every game is started by the referee hurling the ball into the ground in the centre of the pitch, before both teams attempt to get possession.

Here’s what the posts look like in an Aussie rules game. How is the league formatted? 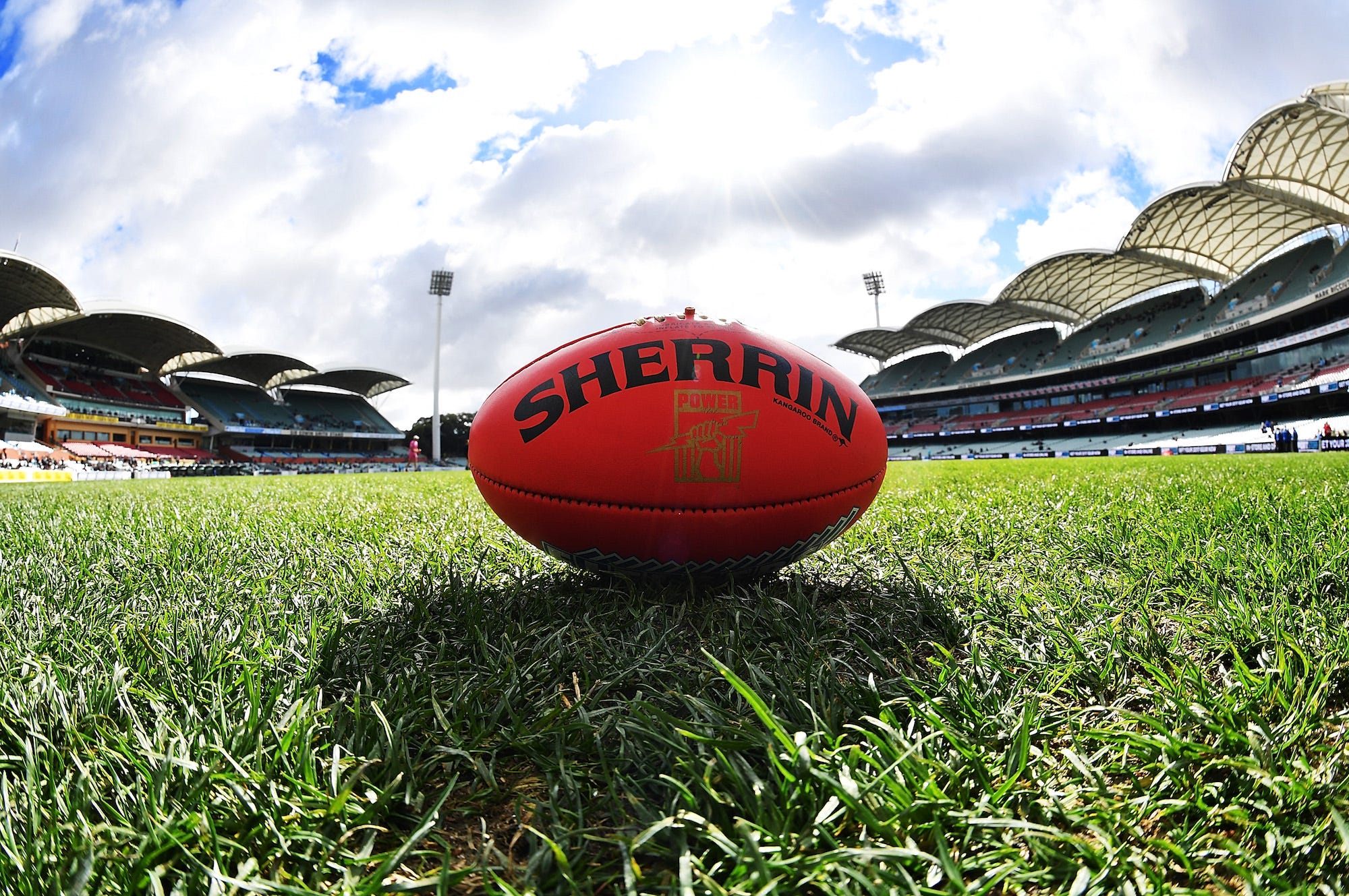 There are 18 teams in the Australian Football League. The AFL is the world’s only professional Aussie rules league.

Each side plays 22 games a regular season, with a win earning them four points and a draw two. After the regular season is done, the top eight teams progress to the finals, which act as a knockout competition until two teams meet in the Grand Final.

The winner of that game is then crowned the AFL champion.

Who are the top teams? 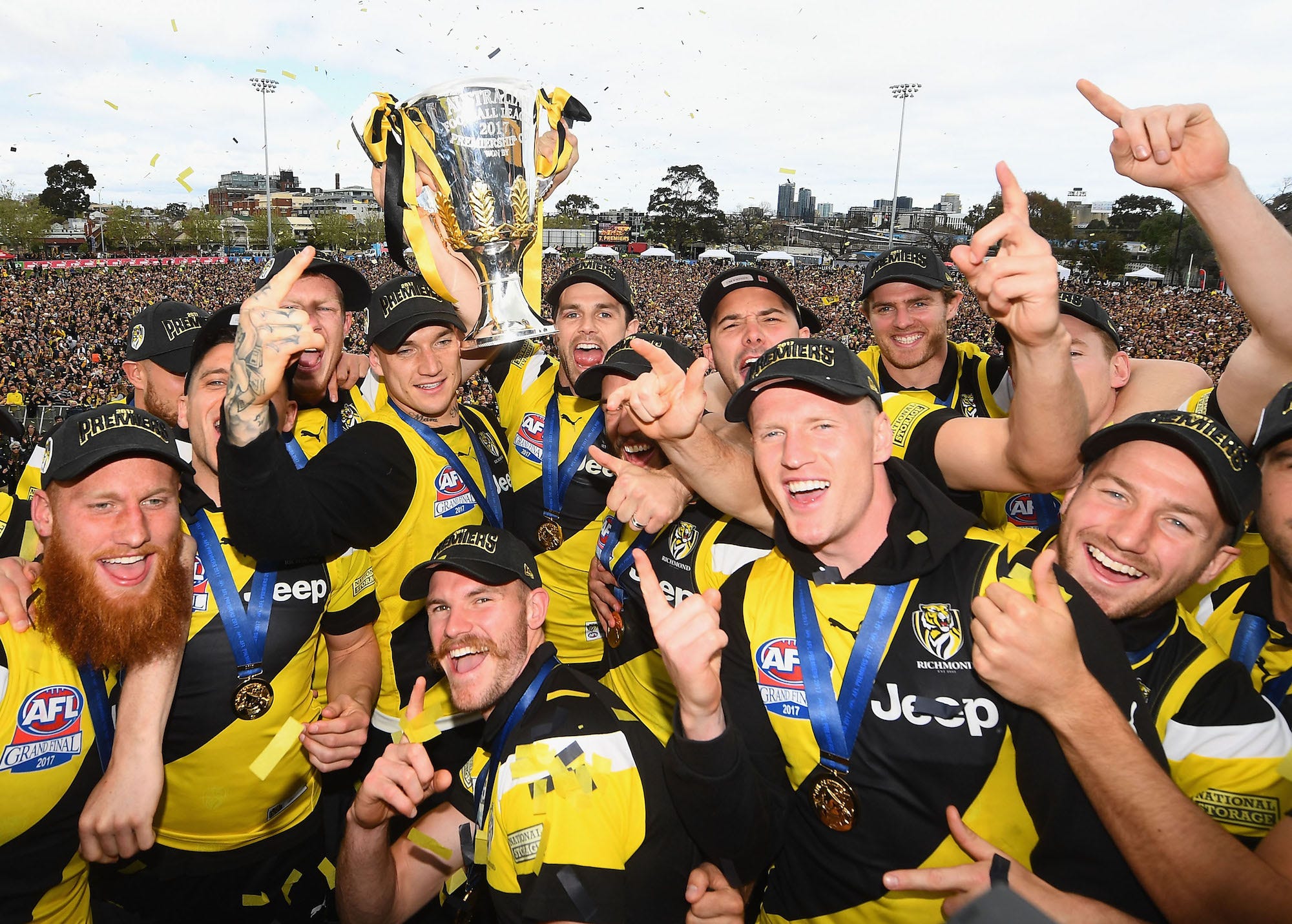 The most successful teams in AFL history are the Essendon Bombers and the Carlton Blues, which have won 16 titles each; however, the two have not won titles since 2000 and 1995 respectively.

The most recent AFL champion is the Richmond Tigers. The Tigers beat the Great Western Sydney Giants in the Grand Final in front of more than 100,000 fans at the Melbourne Cricket Ground back in September.

Who are the top players? 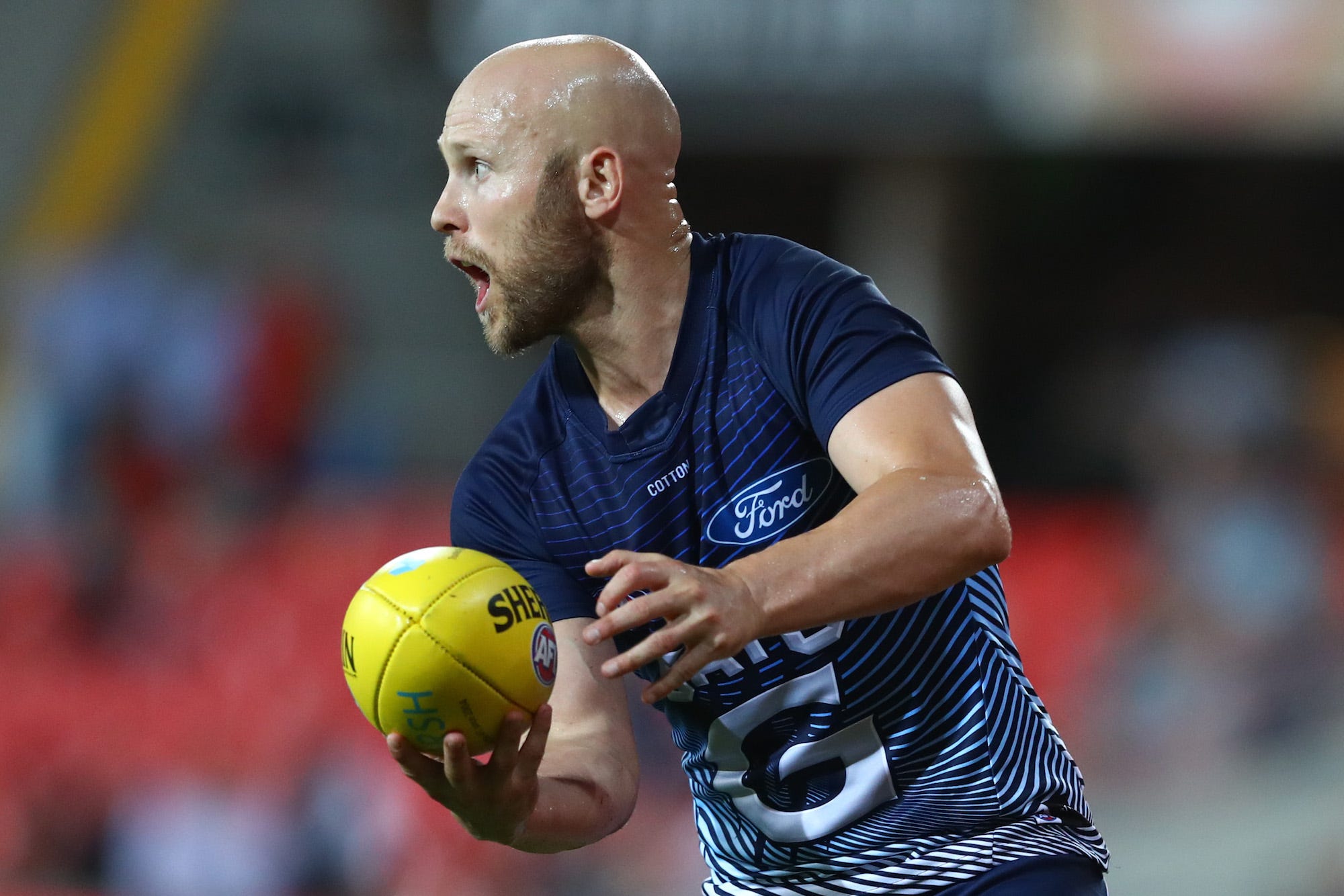 Like any sport, picking the best players is subjective.

That said, at the end of each year the AFL Players Association votes for an MVP, who is handed the Leigh Matthews Trophy. Leigh Matthews was the inaugural MVP winner in 1982.

2019’s winner was Patrick Cripps of the Carlton Blues, while in 2018 it was awarded to Tom Mitchell of the Hawthorn Hawks.

The player to win the most MVP awards is Gary Ablett Jr., with five, three more than any other player. Ablett (pictured above) plays for the Geelong Cats.

An award known as the Coleman Medal is also handed to the division’s top scorer each season. A panel also selects a team of the 22 best players, known as the All-Australian team.

Why is it worth watching?

If you like big hits, lots of goals, and plenty of action, then Aussie rules just might be the sport for you.

Think rugby union meets American football meets Quidditch, but without the pads and the brooms.

“Endurance, strength, power, balance, speed, agility and flexibility – there isn’t many qualities that an AFL player doesn’t demonstrate,” an article from the Australian journalist Natalee Keer said in Dscribe.

“AFL demonstrates athleticism at its elite peak and is a truly exciting game that brings people of all walks of life together.”

So can I still watch it? 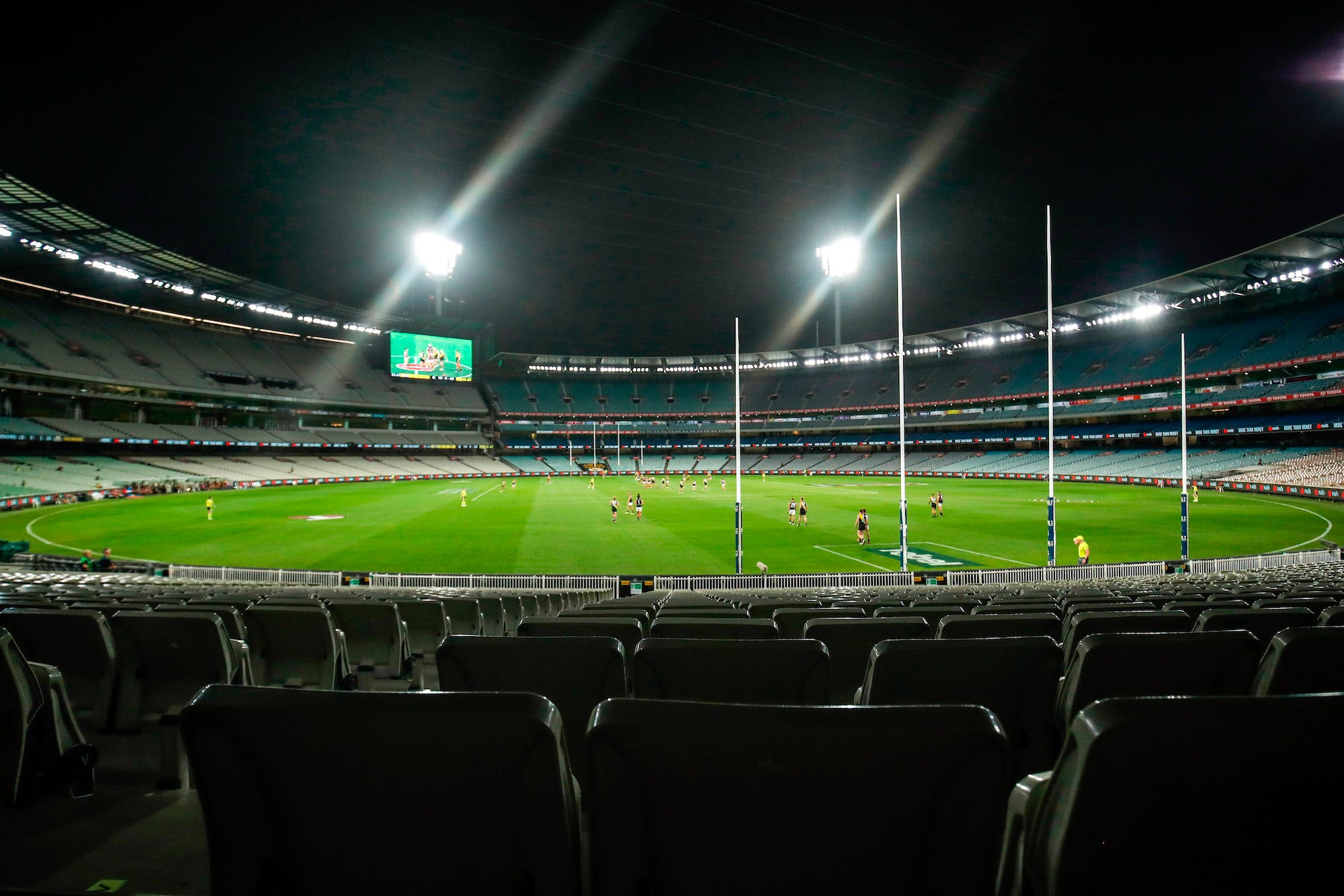 Yes, matches are still being broadcast on Channel Seven, Foxtel, and Telstra. They can also be viewed live from around the world on the AFL website.

Amid the coronavirus pandemic, the league’s structure will be slightly different from previously explained in this post.

Teams will play only a maximum of 17 games each for the 2020 season, all of which will be played behind closed doors until the Australian government’s restriction on mass public gatherings is lifted.

Matches will also be only 64 minutes long rather than 80, so teams can play more regularly to work around a schedule that is likely to change.

The first match was played Thursday, with the Tigers beating the Blues, 105-81.