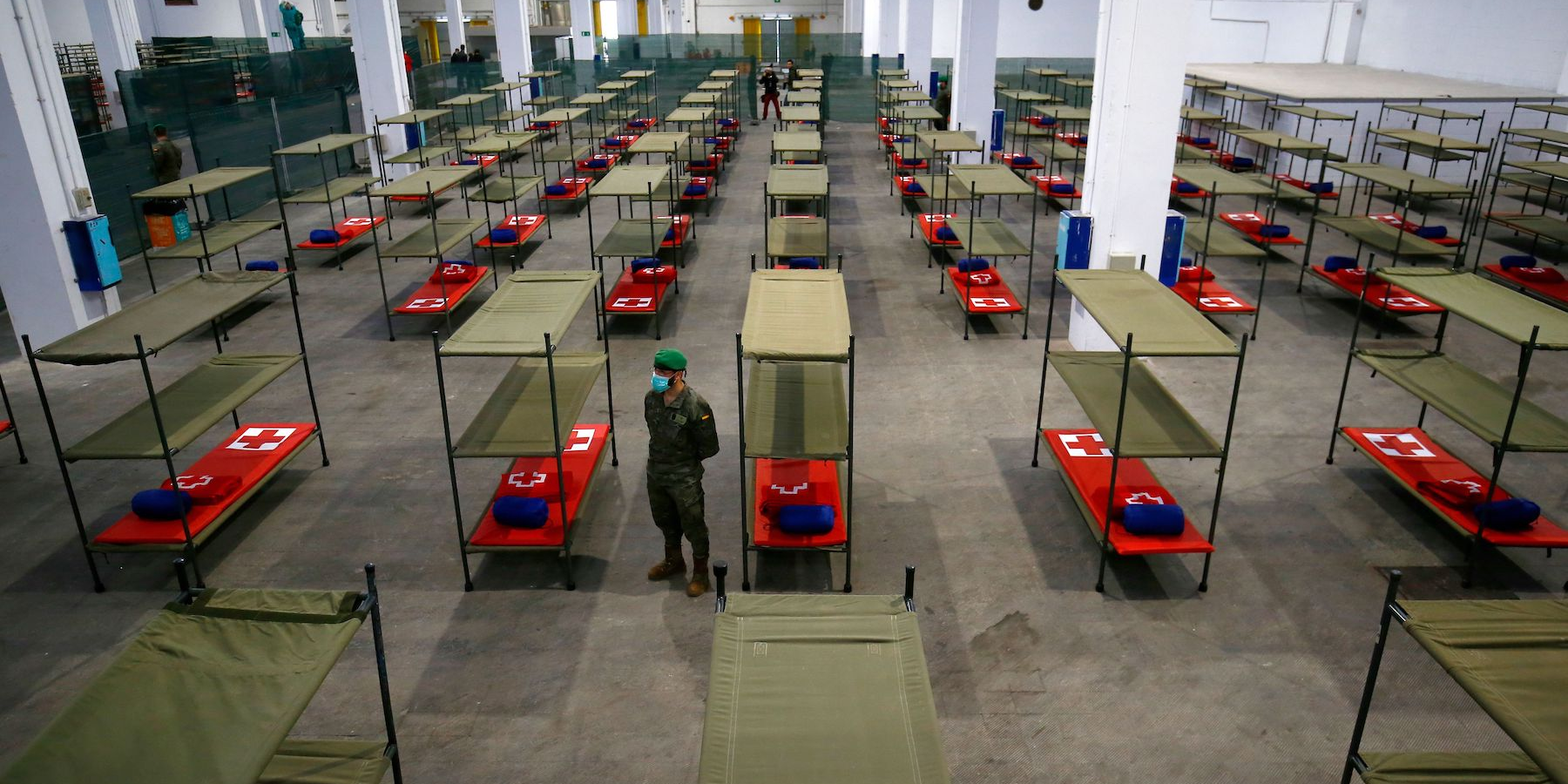 PAU BARRENA/AFP via Getty ImagesA Spanish soldier standing next to beds set up at a temporary hospital for vulnerable people in Barcelona.

Microbiology experts in Spain have said that rapid coronavirus tests that the country bought from China are not consistently detecting positive cases.

The error was discovered as Spain is in the grip of one of the worst coronavirus outbreaks in the world, second only to Italy in the number of reported deaths.

Studies on the tests done in Spain found that they had only 30% sensitivity, meaning they correctly identify people with the virus only 30% of the time, sources told the Spanish newspaper El País.

Those sources told the newspaper that the tests should have a sensitivity of more than 80%. The US Centres for Disease Control and Prevention says rapid tests for influenza are required to have 80% sensitivity.

Rapid tests can get a result in minutes but are generally less accurate than other tests. Numerous companies around the world are producing them.

The studies prompted the Spanish Society of Infectious Diseases and Clinical Microbiology to formally recommend not using these tests, El País reported. Health workers are now meant to use other tests that take longer to give a result.

Fernando Simón, the director of Spain’s health-emergencies coordination centre, said on Thursday that Spain checked 9,000 of the tests, found that their results were not consistent enough, and decided to return them. 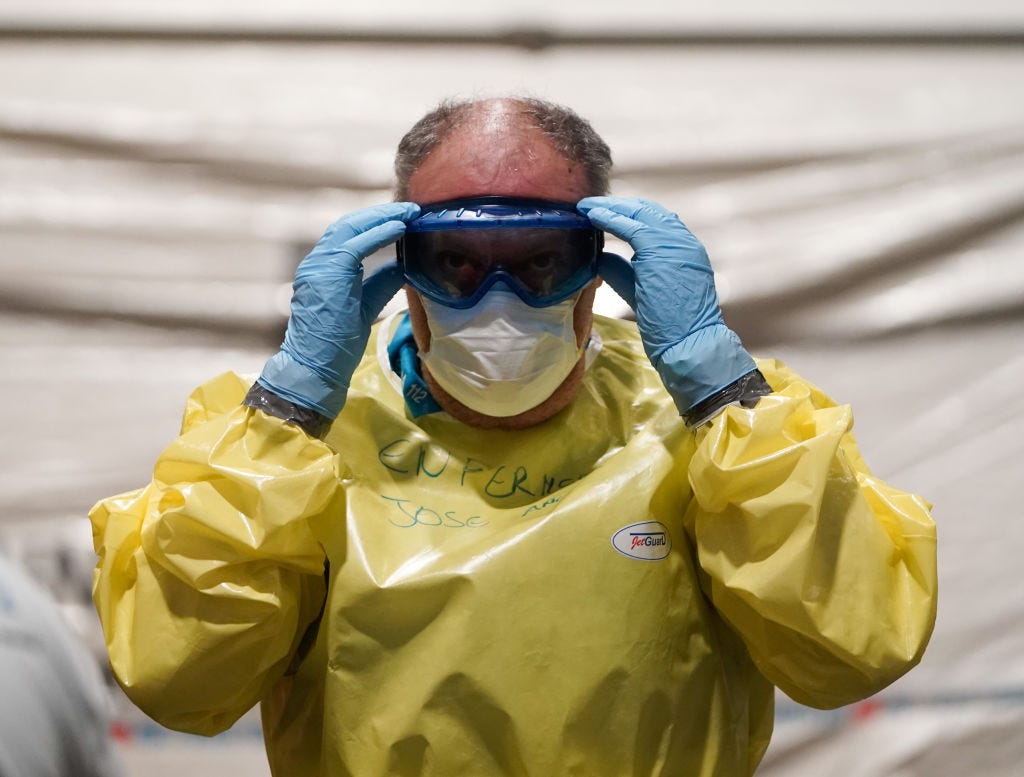 GettyA doctor on the front lines of the fight against the coronavirus in Spain.

Spain’s health ministry confirmed the results of the studies into the tests to El País, with a spokesman saying the Carlos III Health Institute, a public-health institute that reports to the government, “detected a sensitivity that does not correspond to what is established in the technical sheet.”

The spokesman said that the institute had recalled a shipment of the tests sent to Madrid. New tests approved by the government will be rolled out instead, he said.

The tests were being used in the regions of Andalusia and Galicia, and they were first used in the Madrid region on Wednesday.

Delays from implementing the new test will further harm Spain’s efforts to contain the virus, which had killed more than 4,000 people in the country as of early Thursday.

The tests were made by a Chinese biotechnology company called Bioeasy, El País reported. Other countries, including Georgia, have bought the company’s tests.

The Chinese Embassy in Spain said on Twitter on Thursday that the medical supplies China was donating to other countries did not include Bioeasy products.

It said that the Chinese Ministry of Commerce gave Spain a list of manufacturers and that Bioeasy was not among them, adding that it had not been given a licence from China’s National Medical Products Administration to sell its products. 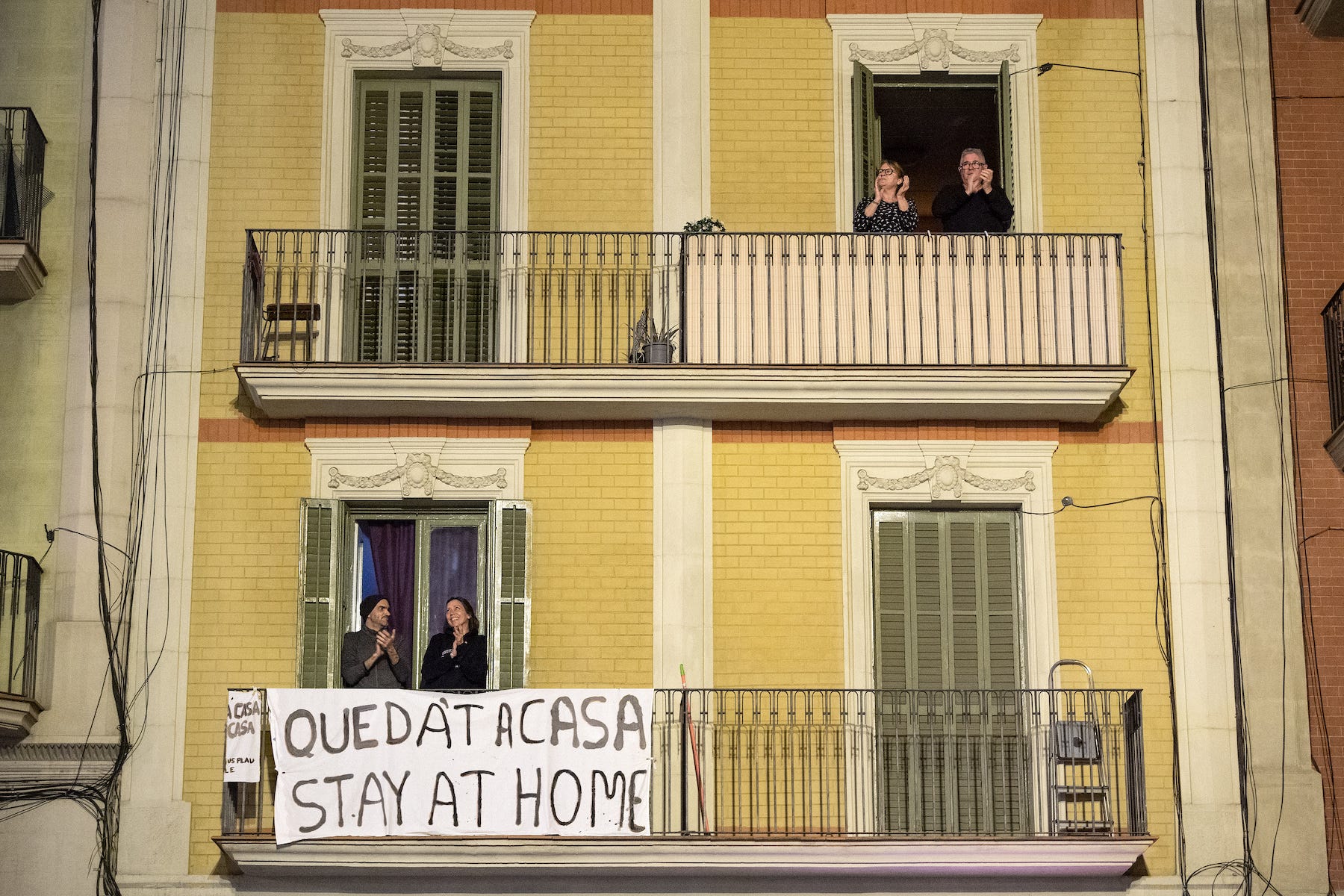 David Ramos/Getty ImagesPeople on a balcony in Barcelona on March 15.

On Monday, Spain said it received 640,000 rapid testing kits from China and South Korea; it is unclear how many were manufactured by Bioeasy.

Medical professionals in the Czech Republic have also said that rapid tests from China were not working properly, but it was not clear whether these tests were also made by Bioeasy.

Spain has been ravaged by the virus outbreak that originated in China at the end of 2019. Spain’s cases have climbed to more than 56,000, the fourth-highest in the world, behind China, Italy, and the US.

As the outbreak has slowed in China – which has frequently reported no new daily domestic cases – the country has sent medical workers and donated medical equipment such as masks and tests to other countries.