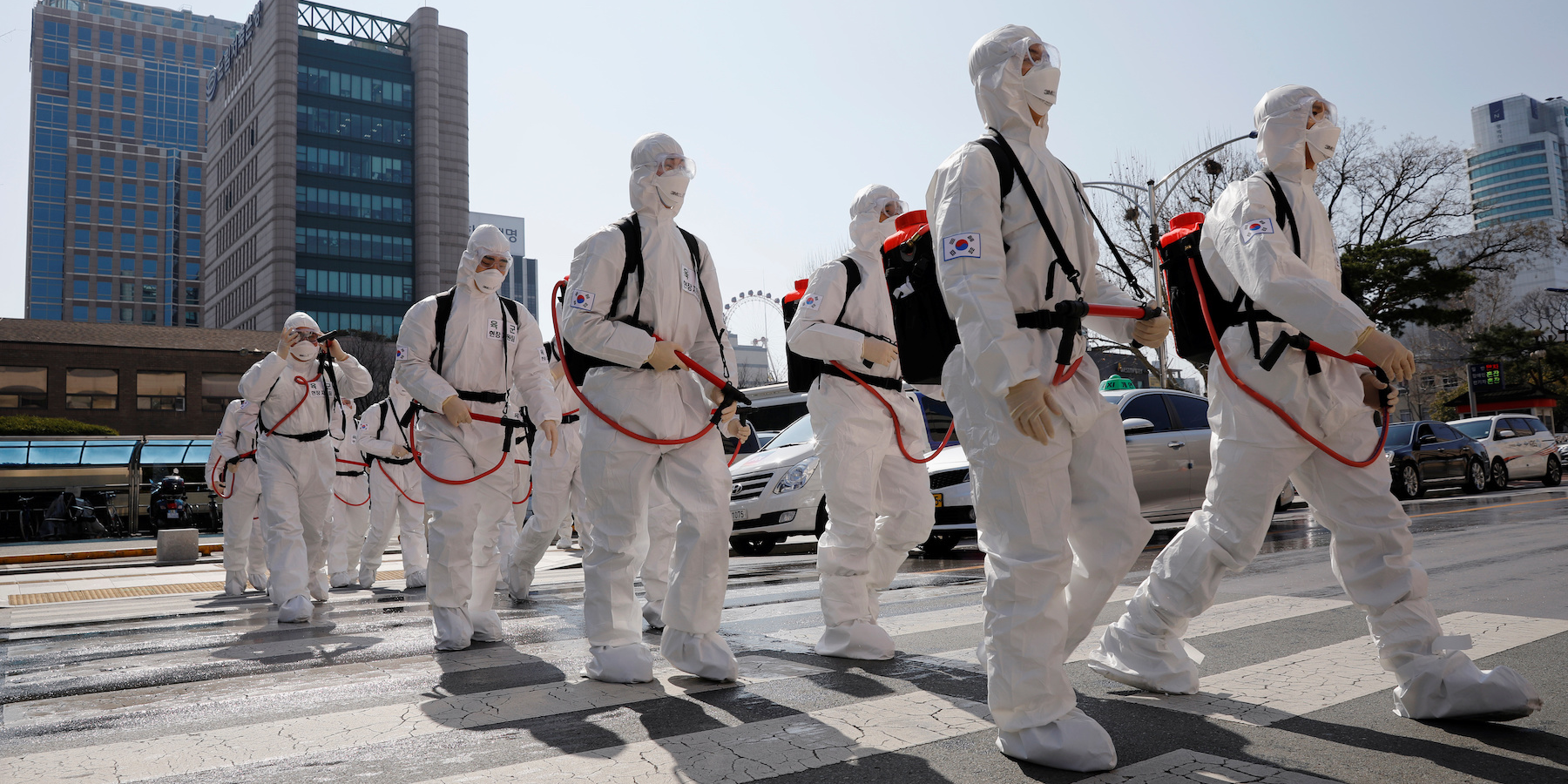 REUTERS/Kim Kyung-HoonSouth Korean soldiers wearing protective gear walk on a street in front of the city hall in Daegu on March 2.

Scientists said the wave of South Koreans who tested positive for COVID-19 even after they recovered did not have the virus reactivate after going dormant and that they were not reinfected.

South Korea announced in early April that some patients who had recovered from and tested negative for the virus later tested positive, suggesting that the virus could reactivate or that patients could be reinfected. The country has recorded this happening in 263 patients, The Korea Herald reported.

But the country’s infectious-disease experts said on Thursday that the positive test results were likely caused by flaws in the testing process, where the tests picked up remnants of the virus without detecting whether the person was still infected, The Herald reported.

The Herald described the experts as saying that “dead virus fragments” were lingering in patients’ bodies after they recovered and that the virus did not appear to be active in the patients.

Dr. Oh Myoung-don, a professor of medicine and the head of Seoul National University Hospital’s division of infectious diseases, said that the committee studying the cases found little reason to believe that the patients had been reinfected or that the virus had reactivated, according to The Herald.

“The tests detected the ribonucleic acid of the dead virus,” said Oh, an adviser to the Korean government and the Korea Centres for Disease Control and Prevention. 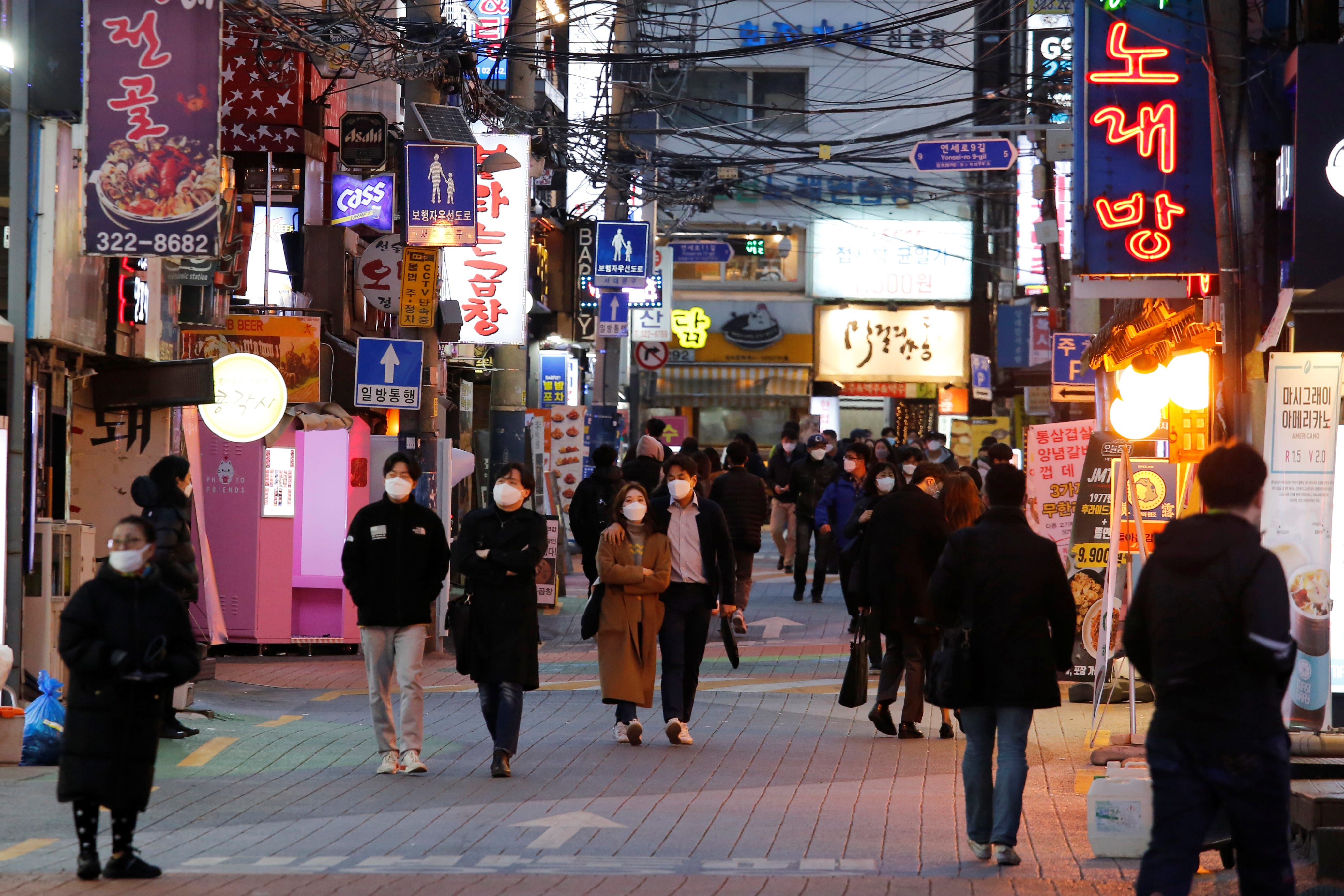 Jeong Eun-kyeong, the director-general of the KCDC, said earlier in April that the positive test results in these patients could mean that the virus “reactivated” after going dormant, Business Insider’s Holly Secon reported.

Jeong said the tests were conducted within a “relatively short time” after the patients were cleared, so it was unlikely that they were reinfected.

“While we are putting more weight on reactivation as the possible cause, we are conducting a comprehensive study on this,” Jeong said. “There have been many cases when a patient during treatment will test negative one day and positive another.”

But many experts said it was unlikely that the virus would go dormant and then reactivate in people. Instead, they said, it was more likely that patients’ bodies still had some fragments of the virus. This would mean a person could get a positive test but not be ill or able to infect others.

Dr. Keiji Fukuda, the director of Hong Kong University’s School of Public Health, told the Los Angeles Times in March that this was the most likely scenario.

“The test may be positive, but the infection is not there,” Fukuda said. 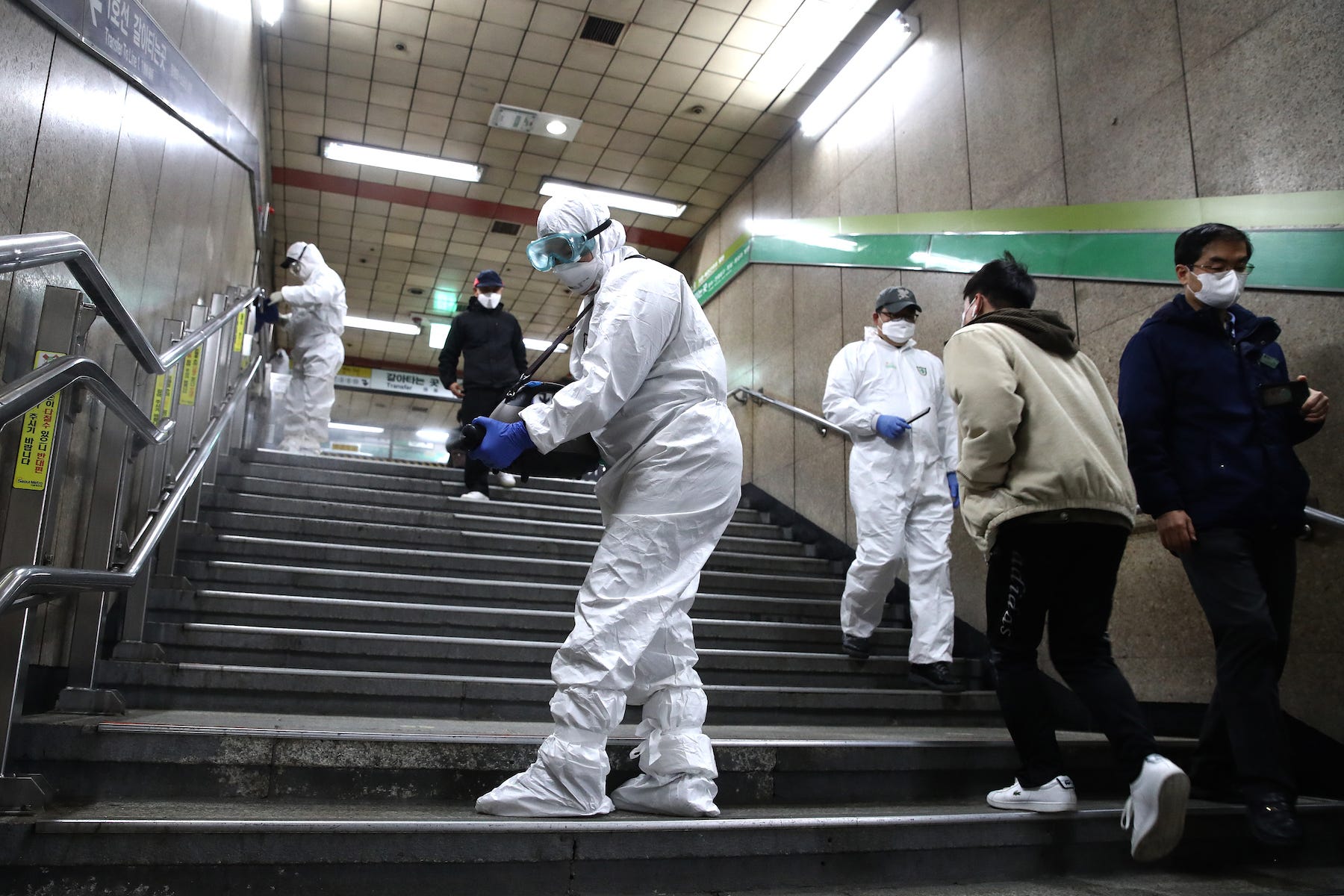 Oh said the committee also strongly believes this is what happened.

He said that dead virus cells could take months to leave patients’ bodies after they recover and that their test could not determine whether the virus was alive or dead, leading to false positives, according to The Herald.

Other countries have grappled with unreliable tests for the virus and its antibodies, saying that there could be high numbers of false positives and false negatives. 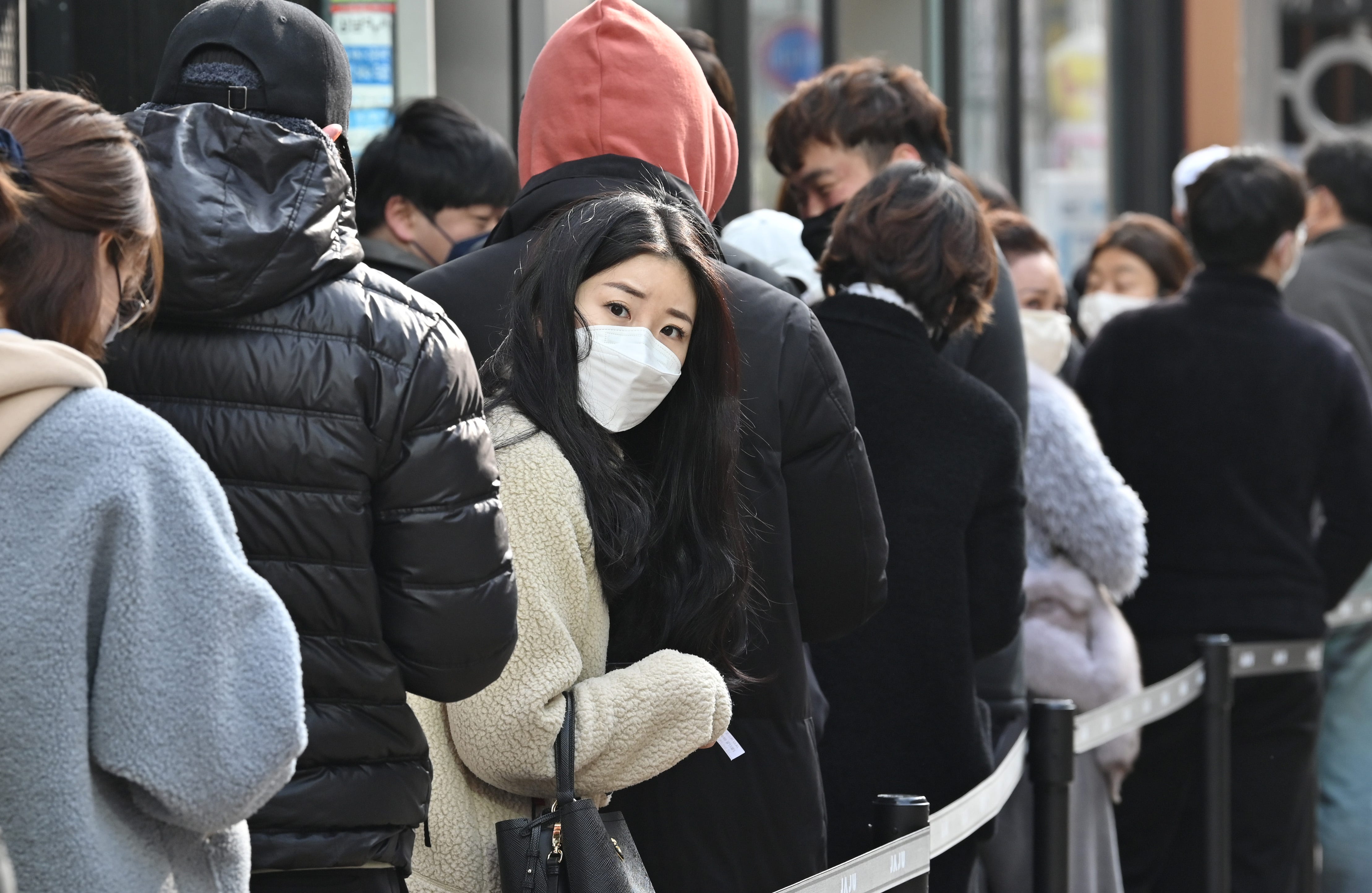 JUNG YEON-JE/AFP via Getty ImagesPeople wait in line to buy face masks at a store in Daegu’s Dongseongno shopping district on February 27.

South Korea on Thursday reported no new domestic infections in a day for the first time since February.

It said four new cases were from people travelling into the country.

The country has been a pioneer in the fight to control the spread of the virus – and it has done so without implementing a nationwide lockdown. 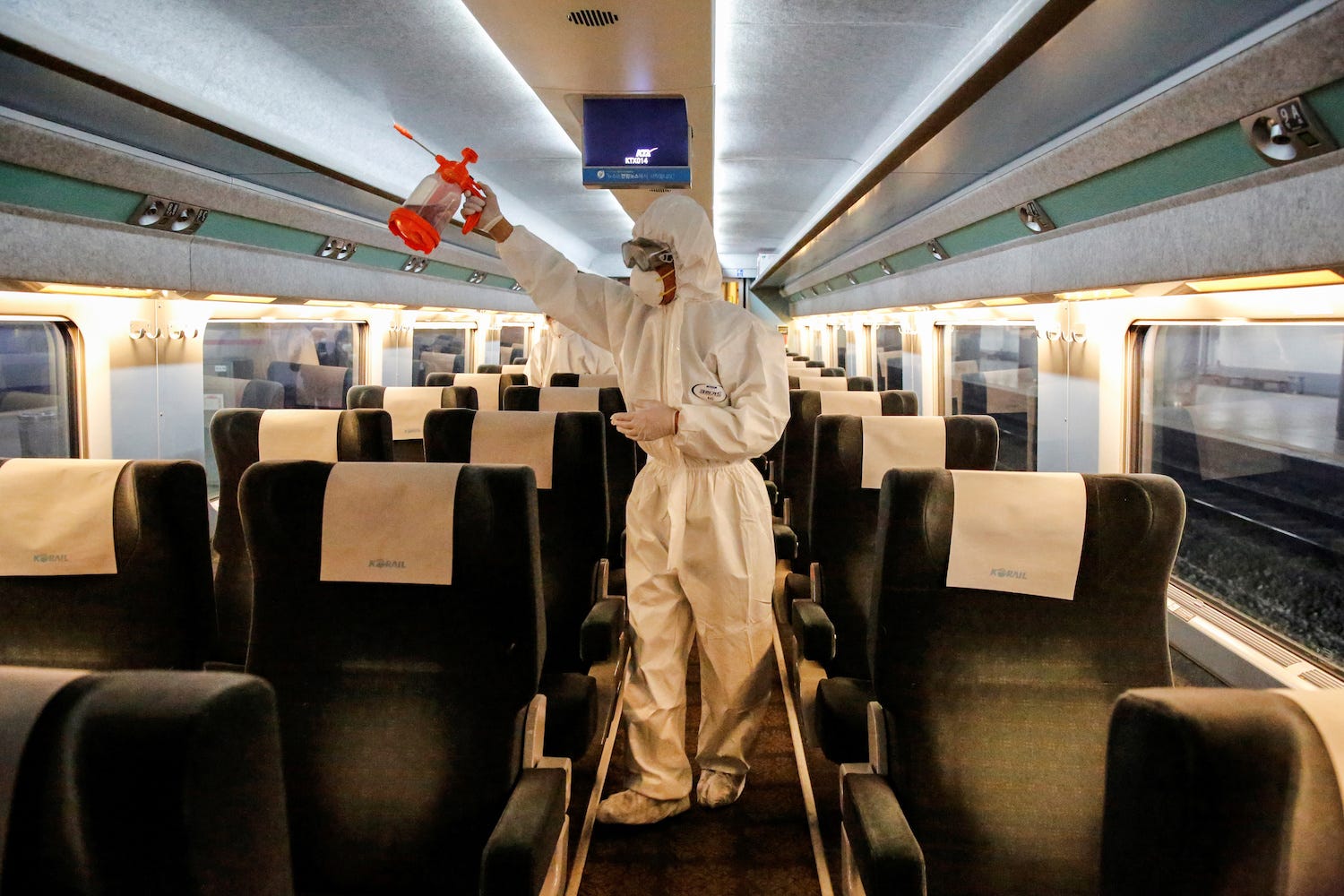 ReutersAn employee of a disinfection-service company sanitizes a train at the Seoul Station on March 4.

South Korea, one of the first countries outside China to record cases of the virus, tested widely and traced the contacts of people who tested positive.

It also implemented sweeping social-distancing guidelines, including seating people far apart at restaurants. But unlike much of the rest of the world, it did not close venues.

South Korea also said it avoided any new cases stemming from the 29 million people who voted in a parliamentary election this month. Voters were made to wear masks and gloves.