One chart explains why Disneyland, Broadway, and sports arenas are all going dark to stop the coronavirus epidemic 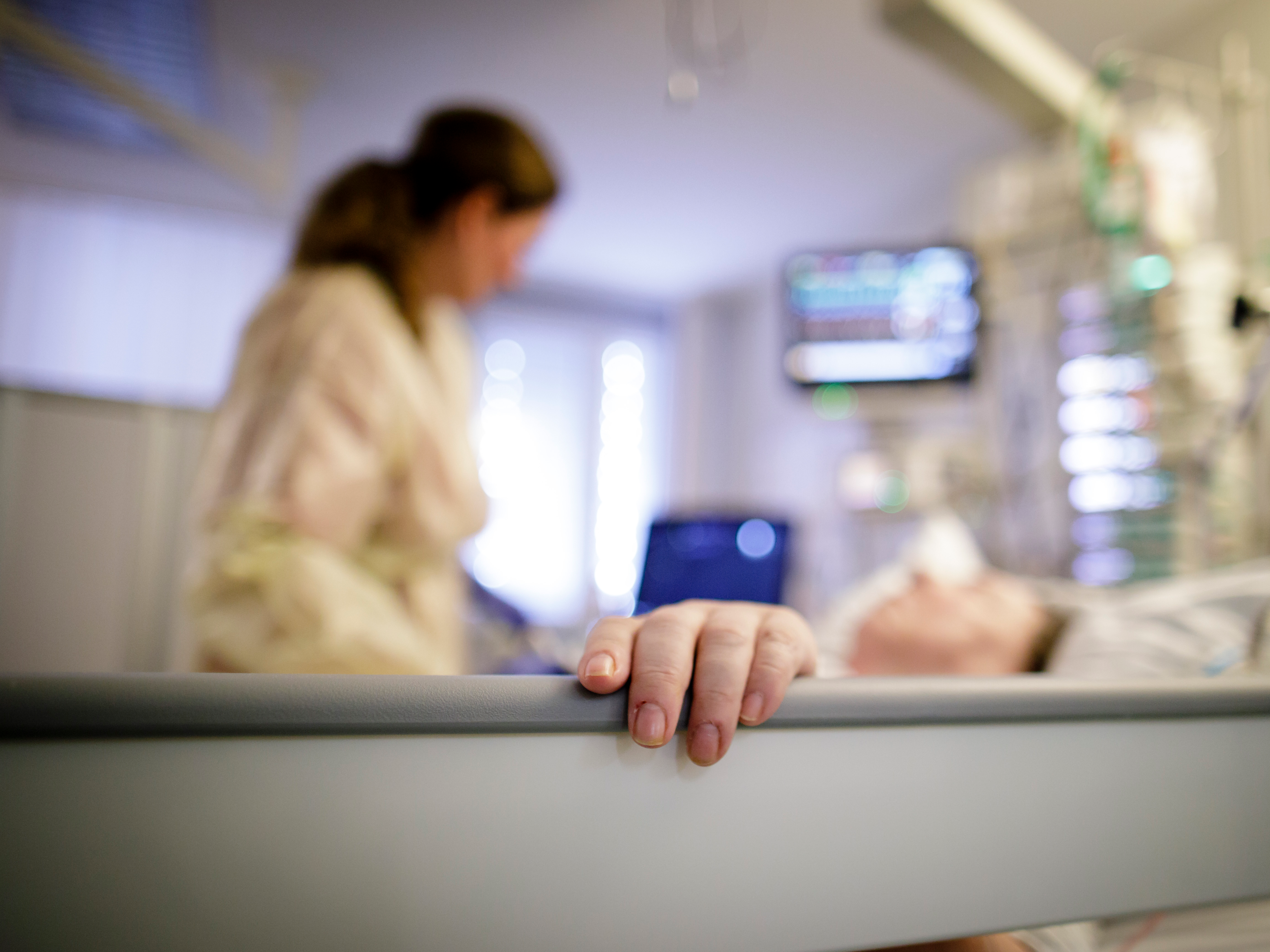 Getty ImagesSocial distancing measures could help keep the novel coronavirus from overwhelming the US healthcare system.

The novel coronavirus outbreak could push the US healthcare system to its limits.

In particular, intensive care units, which treat the sickest patients, could face shortages of key equipment like ventilators. They could also face staffing shortages and run out of space, should the outbreak be as widespread as some estimates suggest it could get.

It’s why organisations have made the drastic decision to cancel major events. As of Thursday, sporting events like the NCAA basketball tournaments had been cancelled, and the National Hockey League, Major League Baseball, and the National Basketball Association have all suspended their seasons.

A decision by New York Governor Andrew Cuomo to ban gatherings of more than 500 has led Broadway shows to halt until April 12.California’s Disneyland will be closed starting Saturday through the end of the month.

Protective measures like closing workplaces and cancelling large gatherings such as sports games are key in mitigating the spread of the COVID-19 virus, as illustrated by a chart from the Centres for Disease Control and Prevention.

That, in turn, would help stop the virus from overwhelming the US healthcare system.

Why preventive measures could help

The looming threat of shortages of space, materials, and people to care for patients has led to public health officials in other countries taking drastic steps to curb the spread of the virus, placing cities and even whole countries on lockdown.

A review conducted by researchers at the University of Hong Kong and published in the Centres for Disease Control and Prevention’s Emerging Infectious Disease journal evaluated the effectiveness of six measures to reduce the transmission of influenza:


Read more:
What ‘social distancing’ actually means, and how to know if you should cancel your plans during the coronavirus outbreak

Ideally, using a mix of the social distancing techniques, countries like the US could keep the spread of the COVID-19 virus within the limits of health systems, as demonstrated with this chart.

The idea is to reduce the number of people who are sick at the peak of the virus’s spread, so that the health system isn’t overwhelmed, and more people can get life-saving care.

That’s especially important in the absence of pharmaceutical treatments or a preventive vaccine for the virus.

Pleas to help “flatten the curve” have gone viral as the US looks for measures to curb the spread of the virus. 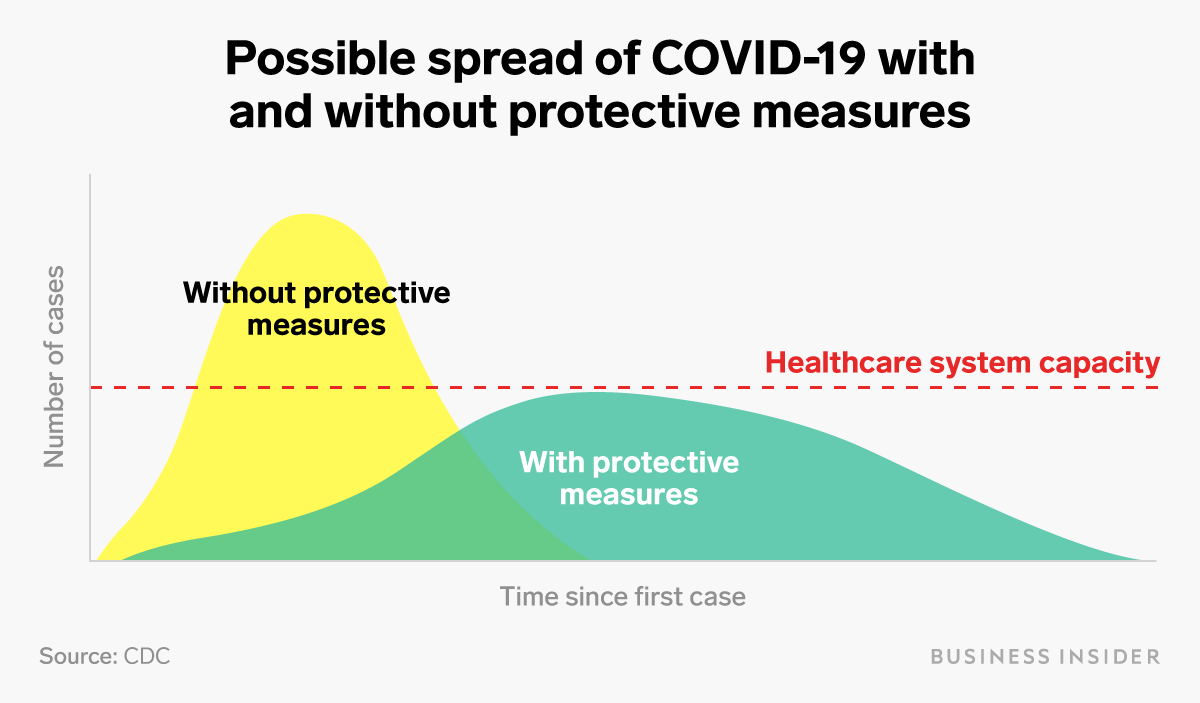 Dr. Anthony Fauci, the head of the National Institute of Allergy & Infectious Diseases, referred to this chart on Friday, shortly after President Donald Trump declared a national emergency to help halt the pandemic.

“That curve that I’ve referred to that goes up, we don’t want to have that curve,” Fauci said. “We want to suppress it down to that small mound. And I think what we’ve done today is something that is going to be a very important element of having us be successful in doing that.”

Already, the social-distancing measures seem to be leading to a fewer infections in countries that had early spread of the disease. China has seen a dramatic reduction of infections and deaths after taking drastic actions like locking down cities amid the outbreak.

South Korea, which has tested more than 140,000 people for the virus, has started to see a slowdown in cases amid decisions to cancel school and large social gatherings.

Without the measures, the healthcare system risks being overrun by patients who need care and not enough supplies to care for them.

For instance, ventilator guidelines for New York state released in 2015 note that there are 7,241 ventilators available, with an additional 1,750 stockpiled. Ventilators are a crucial tool to care for people sickened by the flu or the novel coronavirus, both of which make it hard for patients to breath in severe cases.

Under an extreme influenza pandemic scenario outlined in the document, hospitals in the state would only have about 15% of the ventilators they need to care for patients, assuming ventilators are still being used for other patients not related to the outbreak.

As part of the presentation to hospitals, Dr. James Lawler, a professor at the University of Nebraska Medical Centre gave his “best guess” estimates of how much the virus might spread in the US.

There are roughly 95,000 intensive care unit beds in the US. The slide does not give a particular time frame.


Read more:
One slide in a leaked presentation for US hospitals reveals that they’re preparing for millions of hospitalizations as the outbreak unfolds

Already in Italy, in parts of the country hardest hit by the coronavirus, clinicians are facing a shortage of medical supplies and hospital beds. Doctors are being forced to make tough decisions about who to treat.

In a March letter, professionals coordinating the response in northern Italy wrote that hospitals in the area are seeing a high number of ICU admissions, because of respiratory failure that requires ventilation. About 10% of all patients who’ve tested positive for the virus have been admitted to ICUs, they wrote.