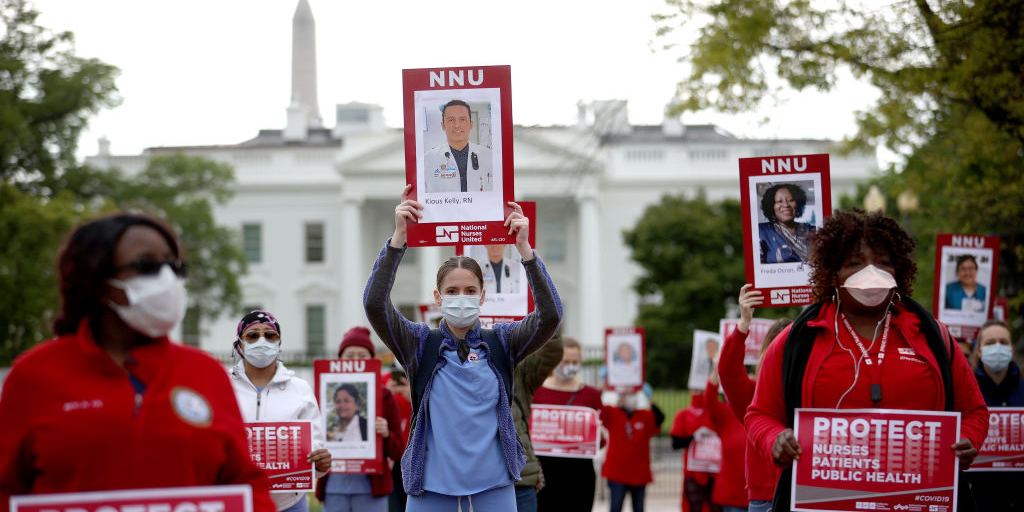 Win McNamee/Getty ImagesRegistered nurses who are members of National Nurses United, the largest nurses union in the United States, protest in front of the White House April 21, 2020 in Washington, DC.

A lack of personal protective equipment has for weeks crippled medical workers battling the coronavirus, prompting the largest nurses union in the United States to protest outside the White House on Tuesday.

National Nurses United is pushing for President Donald Trump to invoke the Defence Production Act and ramp up mass production of PPE, including masks, gloves, glasses, face shields, and gowns, according to a press release. This gear is critical because it enables nurses to care for patients while safeguarding them from exposure.

Members are also seeking “mass testing that is required to control the spread of the virus,” the statement said.

In Washington, DC, demonstrators will practice social distancing while reading aloud the names of their colleagues who have died due to COVID-19 in struggling hospitals across the country. As of April 21, the coronavirus has infected almost 788,000 people and killed at least 42,374 patients in the United States.

In the absence of a “federal health and safety standard,” nurses have also called on the Occupational Safety and Health Administration (OSHA) to introduce “an emergency temporary standard,” the press release said. The union wants OSHA to include this “mandatory OSHA emergency standard in its next COVID-19 legislative package.”

The plaintiffs allege that they were given “grossly inadequate and negligent protections” and were instead forced to work in “unsafe working conditions,” according to a statement.

The lawsuit highlights a slew of “failures” on the part of the defendants, including, “not providing impermeable gowns and other PPE to cover RNs bodies; not properly training RNs redeployed from hospital units; inadequate provision of safe working conditions for high-risk employees, including pregnant RNs,” the statement continues.

KP Mendoza, a nurse at Mount Sinai Hospital in New York, told Business Insider that he is incensed by the wartime analogies that compare medical workers to “heroes” and hospitals to the “front line” of the pandemic.

“You would not think about telling a soldier, ‘You’re wearing too much to go into battle, you should have less’ or ‘Maybe you don’t need that bulletproof vest, maybe you don’t need this helmet,'” he said. “That’s why I say, don’t call me a hero. Instead, show your support by believing us when we say we need much more PPE.”