Trump and Congress tried to make coronavirus testing and treatment free, but people are still getting big bills when they go to the hospital 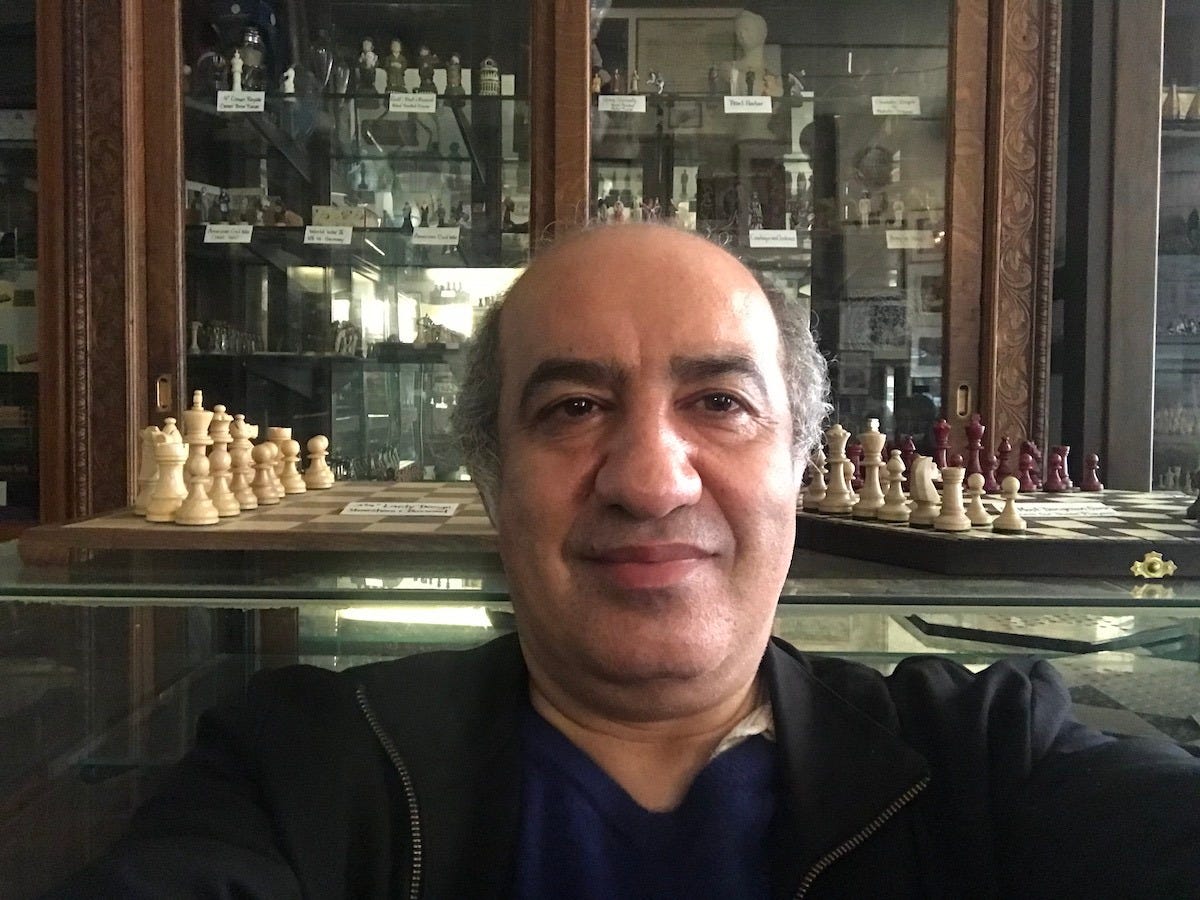 Courtesy Imad KhachanThe Trump administration set up a fund for the uninsured. But Imad Khachan, a coronavirus patient who is uninsured, received a large medical bill after a hospital stay.

Lindsay Hill in Milwaukee spent 30 minutes in a triage tent and later received a $US1,186 bill in the mail.

Imad Khachan from New York City received a bill for nearly $US50,000 after a three-night hospital stay.

Patients who seek medical attention for COVID-19, the disease caused by the coronavirus, aren’t supposed to be getting large charges like these.

President Donald Trump signed two measures into law to protect patients with the coronavirus – and those who seek help because they fear they have it – from having to pay for testing and treatment. His administration is also letting hospitals bill the government directly for coronavirus testing and treatment for the uninsured, instead of charging patients.

But the changes aren’t happening seamlessly. Whether because of bad timing, an incorrect billing code, or being unable to get tested, documents sent to Business Insider show patients who sought medical help for the coronavirus are still facing big bills.

Business Insider previously reported on loopholes in the laws that were passed to protect patients from big medical bills related to the coronavirus. Michael Santos, for instance, received a $US1,689.21 bill after unsuccessfully seeking a coronavirus test and getting a flu test and X-ray instead. His insurer decided to cover the cost of his emergency department visit after Business Insider inquired about it.

Christen Linke Young, a fellow with the USC-Brookings Schaeffer Initiative for Health Policy, said part of the reason patients are still getting large medical bills is that healthcare providers are “dealing with a whole bunch of new payment options.” On top of that, she said, there are loopholes in the new laws and regulations.

“It’s going to result in a significant amount of confusion on the consumer end,” she said, adding that “people’s fear of bills could deter them from seeking care.”

Khachan, 56, the patient in New York City, spent three nights at the end of March in the hospital being treated for the coronavirus.

Khachan owns a chess shop called the Chess Forum in Greenwich Village that has been shut down since March 20. He’d been covered by private health insurance until Dec. 31, 2019, but had foregone coverage for 2020 because of cost.

On March 24, while still in the hospital, Khachan paid the hospital $US5,000 out of pocket for care, according to a receipt he received from Northwell Health, the health system the hospital belongs to.

A couple of weeks after he was discharged, he was stunned to receive a bill for $US47,915.20. He also received several other smaller bills for treatment and tests, as well as a $US788.50 ambulance bill. He said he couldn’t afford the bills and had expected to pay roughly another $US5,000. 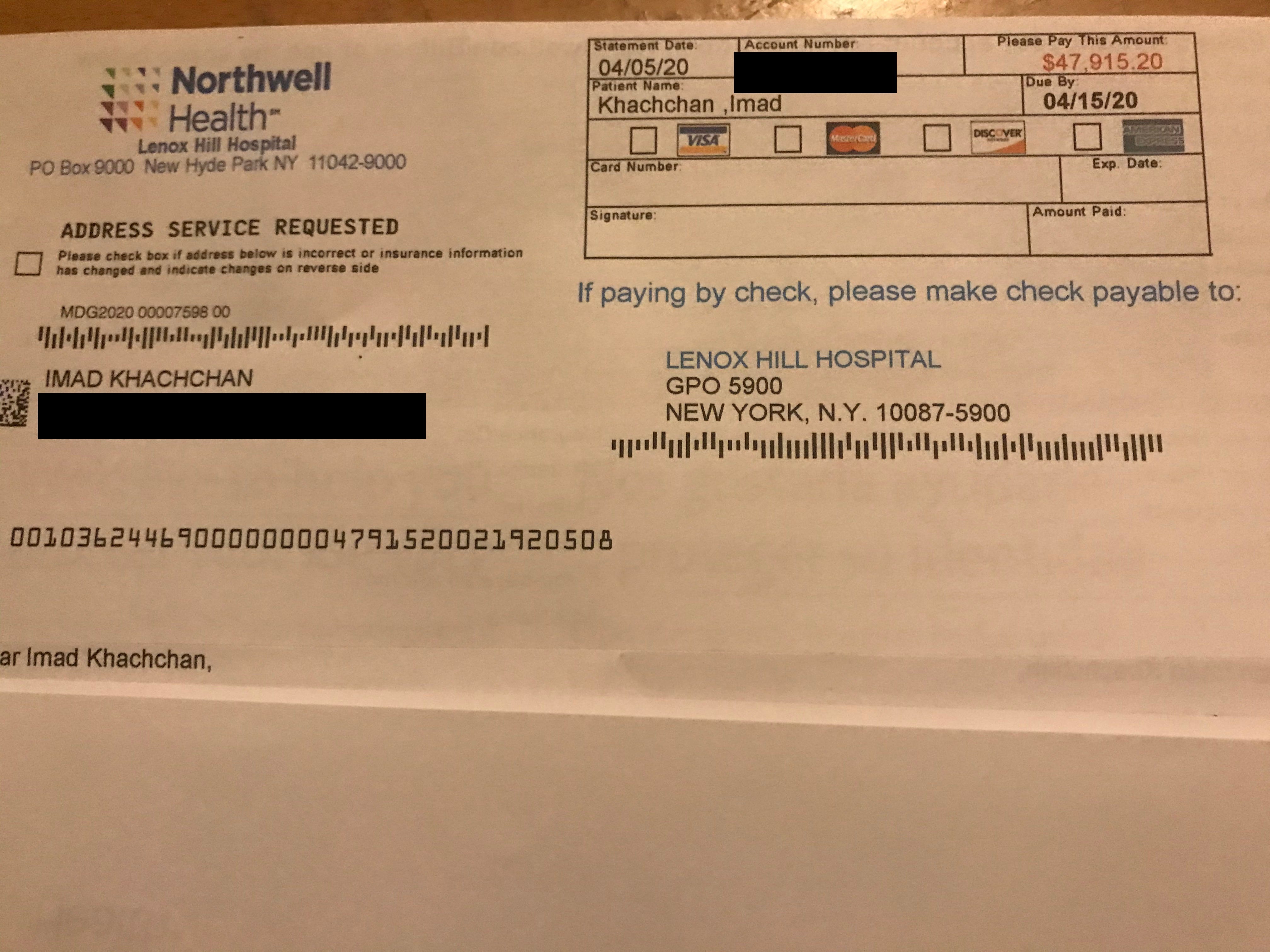 In a later email from the hospital that Khachan shared with Business Insider, Lenox Hill said he owed a lower amount, of $US32,864.20.

Khachan appeared to be a victim of bad timing. He received his bill before the Department of Health and Human Services set up a website where hospitals can request reimbursement for coronavirus testing and care for the uninsured.

The administration announced the fund for the uninsured on April 22 and the website wasn’t up until May 6, which was after Khachan received medical care and his first bill. Payments from the federal government to hospitals started going out May 18, according to the Trump administration.

Under the fund’s rules, hospitals can get paid for anyone who’s uninsured who received testing or care for the coronavirus starting on Feb. 4. Hospitals aren’t obligated to use the fund, and it’s not yet clear how many will choose to participate.

Terry Lynam, a spokesman for Northwell Health, said the hospital first had to enroll to use the online portal, which took a few days, and then started filing claims for uninsured coronavirus patients on May 14.

Khachan’s claims would be included, meaning he won’t have to pay for the medical care and will be refunded his $US5,000 deposit, Lynam said. Northwell plans to call Khachan to double check his information and will send the check before the end of this week, Lynam said.

Hundreds more patients were uninsured and treated for the coronavirus at Northwell’s hospitals alone. Bill Fuchs, who oversees billing at Northwell, said so far its hospital system filed coronavirus claims to the government for roughly 800 uninsured patients.

The hospital system said it’s also instituting a 60-day hold on all patient bills, which prevents them from being turned over to collections. The hold can be renewed depending on financial hardship.

As for the bill for the ambulance, which was provided through the New York City Fire Department, that won’t be covered by the federal uninsured fund, because the department isn’t eligible to use it, a spokesman for the department said.

Federal health officials won’t say how much money they set aside for the uninsured and it’s not clear whether the funding will be adequate at a time when nearly 39 million people have lost their jobs – and, many of them, the insurance that came with them. The Kaiser Family Foundation estimated that the cost of treating uninsured patients with the coronavirus could land between $US13.9 billion and $US41.8 billion.

Linke Young from Brookings said people with the coronavirus who have smaller bills were likely to pay them rather than contest them under the new rules because they don’t know about the federal fund for the uninsured.

She said she would advise patients to call the hospital or doctor’s office and explain why they believe the provider is entitled to reimbursement from the federal government, and for the patient to ask the provider to pursue that option.

“There is nothing that tells providers they can’t bill the consumer first,” she said.

“These funds didn’t use to exist and providers were just doing what they have always done – sending bills,” she added.

Patients are getting billed in other instances.

Anthony, 34 – who asked to use his middle name for this story to protect his family’s privacy – did a video visit on March 23 because he feared he had the coronavirus after he had chest pain that lasted several weeks and spread to his abdomen. His doctor recommended he get an X-ray, so he did.

He didn’t receive a coronavirus test and, after examining the X-ray, the doctor told him he likely had inflammation in the lungs and advised he take Advil.

A couple of weeks later, Anthony got a $US52.94 bill for the online consultation. A couple of days later he received a bill for $US1,528.43 for the X-ray. He was confused about the telehealth bill because he had understood all virtual visits were supposed to be covered without a copay – a change his insurer, UnitedHealthcare, announced March 18.

He received the bill because he hadn’t yet met the deductible for his insurance plan, Anthony told Business Insider. His insurer told him the healthcare provider billed for pleurodynia, a lung infection that causes chest pain.

Anthony paid the bill with money from a health savings account. 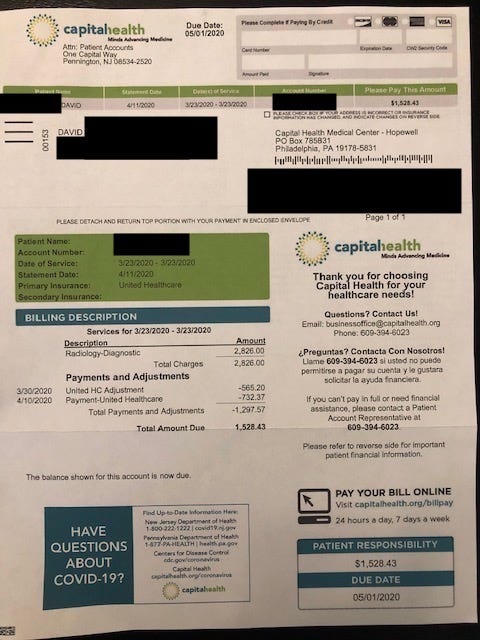 Medical bill for an X-ray

Hill, 39, the patient from Wisconsin, on April 5 visited a triage tent at St. Luke’s Medical Centre because she worried she had the coronavirus.

Nurses measured her temperature, her pulse, and her oxygen levels, and listened to her lungs. Over a video inside the tent, Hill spoke to a nurse practitioner who told her that her symptoms were “textbook COVID.”

But, the nurse told Hill, she wouldn’t be admitted to the hospital because her oxygen levels were healthy. And because she wasn’t being admitted, the hospital wouldn’t be performing a coronavirus test.

“She told me that I ‘most likely’ had it, told me to quarantine myself for two weeks, take extra cleaning precautions around my family, and come back to the ER if my breathing became even more labored,” Hill told Business Insider in an email. “I was in and out of the triage tent in about 30 minutes. No tests were run on me, but my discharge papers read, ‘suspected COVID-19.'”

“It was my understanding from what I had read and what I had heard that there would not be a bill for it,” she told Business Insider. 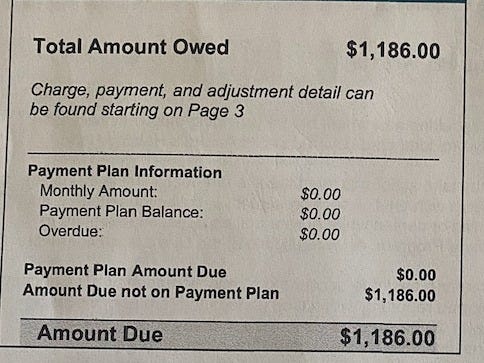 Courtesy of Lindsay Hill.Lindsay Hill’s medical bill. She tried to find out whether she had the coronavirus, but was never tested.

Anthony and Hill both sought care because they worried they had the coronavirus. Under Trump administration rules, “presumed cases” of coronavirus are supposed to be covered, but it’s left up to healthcare providers to bill an insurance company for COVID-19.

“A presumptive case of COVID-19 is a case where a patient’s medical record documentation supports a diagnosis of COVID-19, even if the patient does not have a positive in vitro diagnostic test result in his or her medical record,” said a Health Resources and Services Administration spokesperson.

When patients see doctors, they sometimes order other tests to rule out similar conditions. That means patients can still get charged for those tests even if they only went to a provider in the first place because they feared they had the coronavirus.

“There is nothing to protect them from getting those bills,” she said.

When Business Insider asked about Anthony’s charges, UnitedHealthcare said that it was waiving all out of pocket charges for him after reviewing the services he received, and said it would refund his payments. The company is waiving charges for coronavirus treatment from February 4 to May 31, and providers have to bill the visit as related to COVID-19.

Hill is appealing her bill. She called her insurance provider, Blue Cross Blue Shield of Illinois, which told her that its billing practices had changed since the beginning of April because of the pandemic. The insurer called St. Luke’s to re-code the diagnosis so that it would be covered.

Hill said her insurer was helpful, and she will find out the result of her appeal within 30 days. BCBS Illinois told her that if for some reason the hospital doesn’t recode the bill, then she can appeal to the insurer and submit her discharge papers that read “suspected COVID-19.”

Asked about company’s practices, Katherine Wojtecki, spokeswoman for BCBS of Illinois, didn’t comment specifically on Hill’s case but said in an email that “our focus is on helping our members access medically necessary care amid the coronavirus public health emergency and ease the burden of individuals who may be facing challenging circumstances, so they can focus on their health and well-being.”

LeeAnn Betz, spokeswoman for Advocate Aurora Health, the health system St. Luke’s belongs to, also didn’t comment on Hill’s case but said in an email that patients who arrive at facilities with symptoms of coronavirus will get tested.

“We’ve had to react quickly to changes that insurance companies made in how they wanted services billed during this pandemic, but it’s a priority that our patients are informed on what services they are receiving and why they are being performed,” she said. “In most cases, insurance companies are paying for COVID­-related services without any remaining patient financial responsibility.”

Business Insider is interested in your experience getting medical care during the coronavirus pandemic. If you are willing to share your story, please email senior healthcare reporter Kimberly Leonard at [email protected].