Maimonides Medical CentreCardiac-surgery patients were moved so the space could be converted to critical-care rooms for COVID-19 patients.

They’re converting every available space into room for patients. Medical students are becoming physicians ahead of schedule.

The foe, a novel coronavirus that originated in China about three months ago, has already overwhelmed several of the city’s medical centres. The city has seen a dramatic rise in coronavirus cases since mid-March and is now the centre of the US outbreak.

It’s exhausting doctors and pushing the healthcare system to its limits.

As of Friday morning, the city had reported 25,573 cases and 366 deaths. Gov. Andrew Cuomo said at a press conference Friday that he didn’t expect cases to reach their peak statewide for another 21 days.

Hospitals in the New York City area risk running out of space and equipment to care for the sickest patients as cases surge, according to New York City Mayor Bill de Blasio and Cuomo. The number of deaths, Cuomo said, is going to keep going up.

“That is the worst news that I can tell the people of the state of New York,” he said Friday. “New York is still the most affected state both in terms of number of cases and in terms of deaths.”

In preparation for the surge in patients, hospitals have been asked by the governor to boost patient space by half. The city is also getting an emergency shipment of 2,000 ventilators. 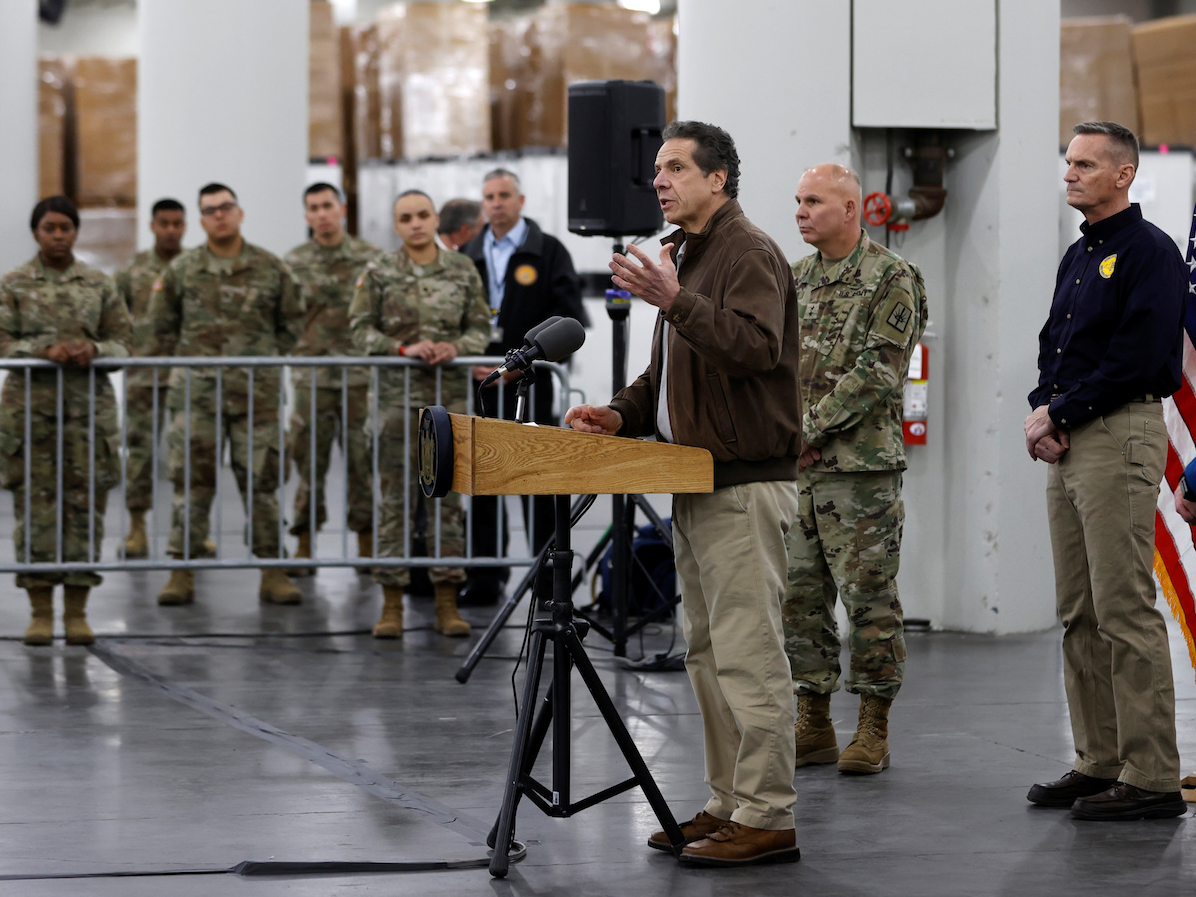 Doctors are hoping that the outbreak slows sooner.

Business Insider spoke with more than half a dozen hospital administrators and healthcare workers across hospitals in NYC to get a sense of what the front lines of the coronavirus look like in the overwhelmed city. Some spoke on condition of anonymity because they had not been authorised to speak with the press. Their identities are known to Business Insider.

A nurse who works in the emergency department at the New York University Medical Centre in Manhattan told Business Insider that patients were streaming in. On Monday, patients showing signs of the coronavirus were coming in every five to 10 minutes.

By Wednesday, a patient was coming in with symptoms every three to five minutes, she said. Serious cases are hitting everyone, including younger adults. On Tuesday, the nurse said she had to intubate two patients in their 30s. NYU declined to comment.

As more patients get the message to ride out the symptoms of the novel coronavirus at home, those coming into hospitals are sicker, according to Dr. Jolion McGreevy, the medical director of Mount Sinai Hospital’s emergency department.

The patients have a hard time breathing on their own, and the hospital is more quickly deciding to put them on ventilators to help them breathe. 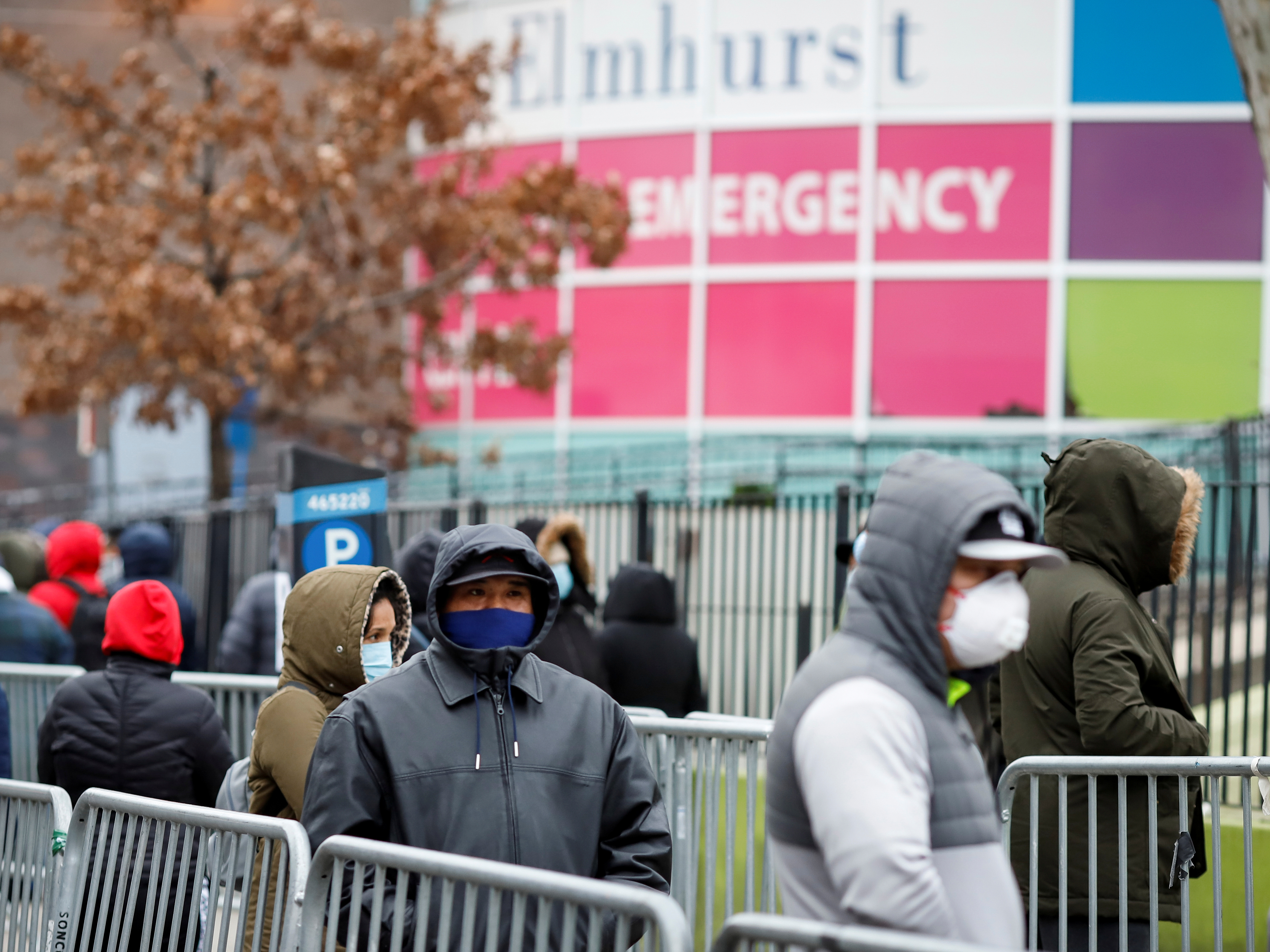 REUTERS/Stefan JeremiahPeople in line to be tested for COVID-19 outside Elmhurst Hospital Centre in the Queens, New York City, on March 25.

Queens appears to be the hardest-hit part of the city. As of Friday morning, the borough accounted for about one-third of the city’s cases.

The city-run Elmhurst Hospital in Queens has been overwhelmed, with staff reporting a doubling in cases coming into the emergency room, a refrigerated truck for bodies of patients who have died, and limited ventilators on hand to care for patients, according to press reports.

Northwell’s Long Island Jewish Forest Hills Hospital in Queens has been “inundated” with cases, Jarrett said. Northwell is moving patients to larger hospitals nearby, he said.

Another hospital in Queens is running low on ventilators and protective gear, according to a doctor there who spoke on condition of anonymity to avoid professional repercussions. The doctor said he was trying to wait as long as possible before putting patients on ventilators to conserve equipment.

“The threshold to intubate is much higher,” he said.

Over the course of the week, the hospital took in about another 100 coronavirus-positive patients. Soon, he said, patients who are positive for COVID-19 will be in beds throughout the hospital.

‘I’ve not seen it slowing’


A leaked presentation reveals the document US hospitals are using to prepare for a major coronavirus outbreak. It estimates 96 million US coronavirus cases and 480,000 deaths.

Starting about two weeks ago, health systems across the city started rushing to add space for the expected surge of coronavirus cases. They cancelled noncritical surgeries and are opening up additional intensive-care units, turning to units that were otherwise used for surgery recovery. They’re also bringing in staff who’d otherwise work in other parts of the hospital to help.

On Sunday, Cuomo announced plans to turn the Javits Centre in Manhattan into a 1,000-bed hospital for coronavirus patients. The following day, he told hospitals they must increase their bed counts by 50%.

Dr. Craig Smith has said that the NewYork-Presbyterian system estimates it will need 700 to 934 ICU beds. Even that lower figure exceeds the number that are likely available, Smith, who’s the chairman of the Department of Surgery at NewYork-Presbyterian’s Columbia University Irving Medical Centre, wrote in a letter to colleagues.

At Mount Sinai Hospital, more than half the hospital has been designated as space for coronavirus patients, according to a doctor who works in the health system. The hospital is now turning its soaring atrium into space to care for patients.

A Mount Sinai spokesman told Business Insider that the system was preparing for surge capacity, like other New York hospitals.

In the ICU, he has young patients in their 20s and 30s on ventilators. Some of the patients he was taking care of have died. He said some patients were experiencing kidney or liver failure.

“Newark Beth Israel, an RWJBarnabas Health facility, is taking all necessary precautions and immediate action steps to ensure the safety of our patients and our colleagues,” a spokeswoman for the hospital told Business Insider in a statement.

She added that the organisation was following protocols from the New Jersey Department of Health and the Centres for Disease Control and Prevention.

“We have created capacity in our facility to treat critically ill COVID-19 patients and our critical care teams receive the personal protective equipment needed to care for these patients. This is a rapidly evolving situation, and to that end, we review supply management and personnel daily,” she said. Running low on staff and supplies

As cases mount, supplies of protective equipment have gone into short supply, and hospitals are rationing the gear.

The ICU doctor in Newark said his hospital hands out one mask per day as doctors report to work. New stock comes in but doesn’t last long.

Already, the critical-care team is working on a “skeleton crew,” as staff have fallen ill.

“If we can’t protect ourselves, who’s going to be the one to carry everything on?” he said.

At NYU, the nurse said, protective gear is kept under lock and key.

The nurse at NYU is working with colleagues who have tested positive but haven’t shown symptoms. Because they’re asymptomatic, the health system is allowing them to keep working. For now, the health system’s policy is that workers can come in if they have been symptom-free for 72 hours.

“They just won’t have any staff members if we all stay home,” the nurse said.

On March 20, New York City’s Department of Health issued guidance to stop testing for the coronavirus in nonhospitalized patients and in patients where testing wouldn’t ultimately factor into how they managed symptoms. The goal is to limit how much equipment hospitals are using. 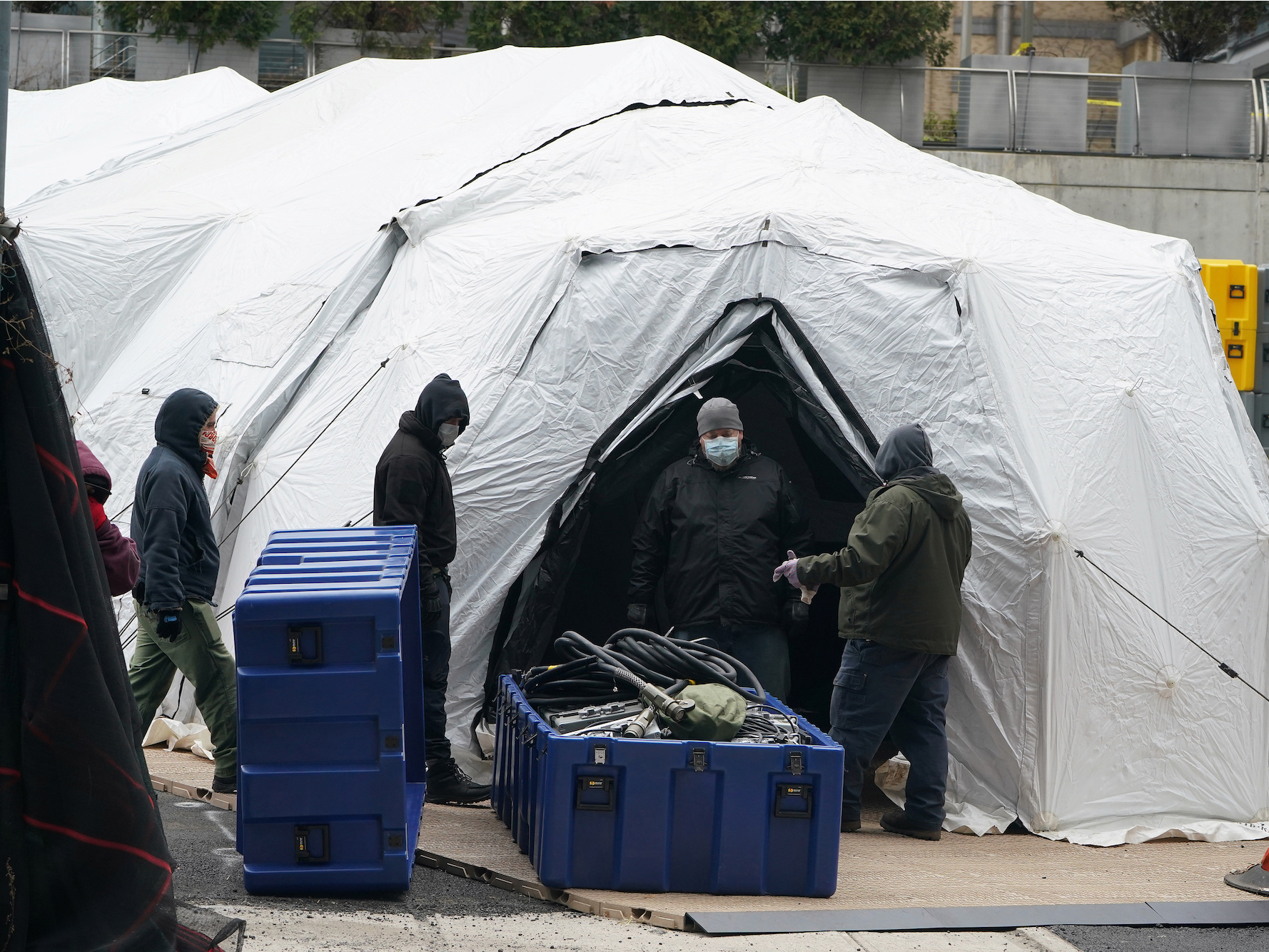 In Brooklyn, Maimonides Medical Centre is gearing up. The hospital typically has about 720 beds and is stretching that to 1,400, using a tent, a nursing facility, and areas normally used for cancer treatment and surgeries.

“We are anticipating continued surge for the foreseeable future,” Dr. Patrick Borgen, the chair of surgery, said. “We’re having to aim pretty far down the line.”

As the patient count grows, keeping staff on hand to care for those patients will get even more challenging.

“Staffing is the biggest issue we face right now,” Northwell’s Jarrett said. “If we get more cases, that will be even more of a problem.” 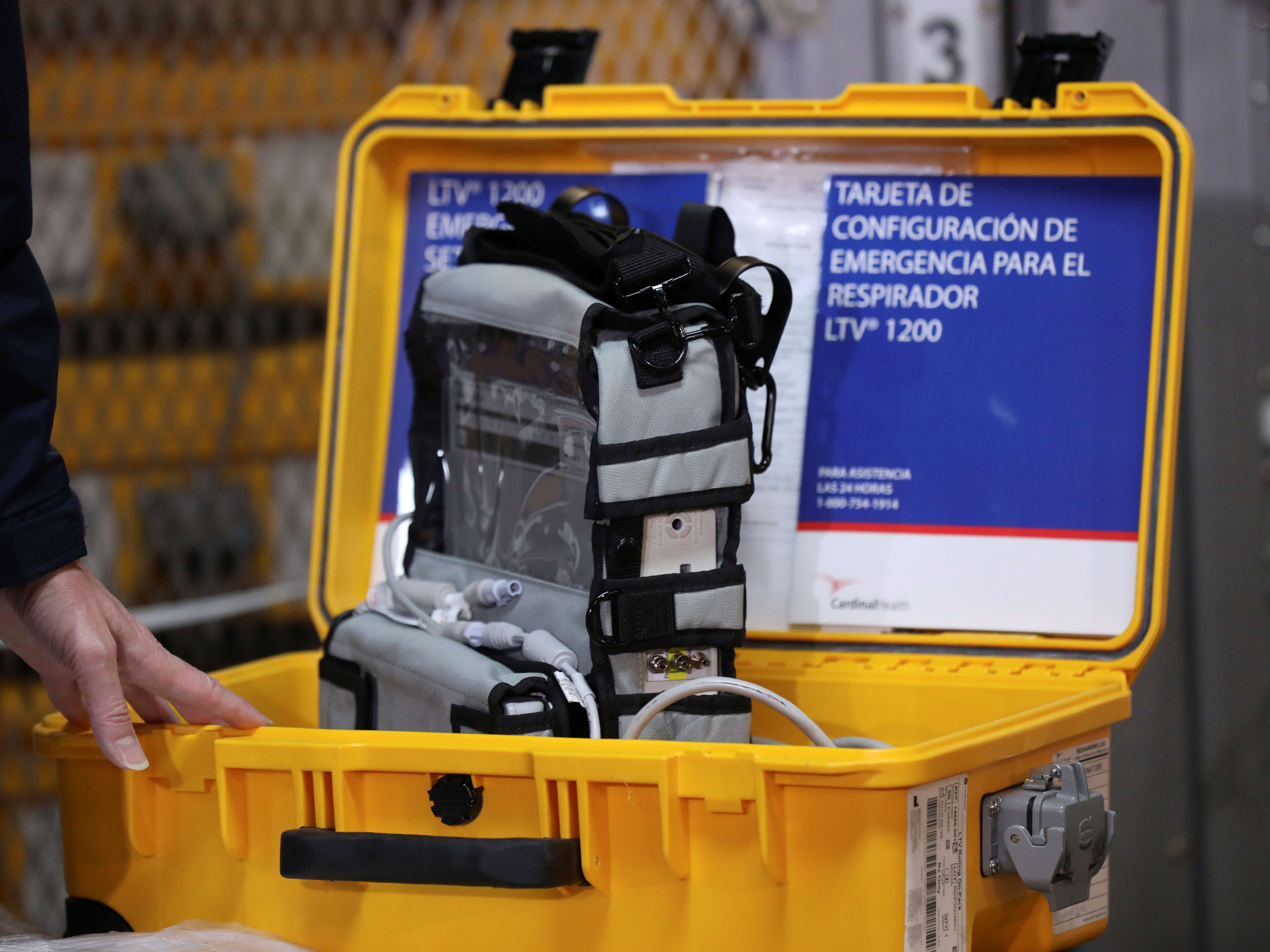 Stretching the use of breathing equipment

Maimonides is also taking cues from other providers that have started getting creative with how they’re using equipment, such as setting up one ventilator for two patients.

“We’re having to think outside the box as this thing grows,” Borgen said. The health system is studying the approach but has yet to try it.

Doctors at Columbia are already hooking up two patients to the same ventilator. In an update from Smith, he wrote that as of Wednesday, the organisation had converted empty operating rooms into ICU rooms, each holding two to three patients with COVID-19. Some of them are sharing ventilators.

Northwell’s Jarrett said the organisation was working to turn anesthesiology machines that might otherwise be used during surgeries into ventilators.

Planning for the weeks ahead

For now, Borgen said, the hospital has the space it needs.

What he’s planning for is next week.

Already, NYC is beyond some of the best-case scenarios Northwell had laid out for the pandemic, Jarrett said.

With the final days of March ahead, the focus is on expanding capacity within the hospital in regard to space, equipment such as ventilators, and staff.

When that runs out, the city’s hospitals might find themselves in a similar place as Italy, which had to make hard choices about whom to treat with the space and supplies they had.

The height of the pandemic is still to come.

If the patient count keeps rising for weeks, Jarrett said, “We along with everybody else in the New York City metro area will be running into issues we don’t want to run into.”

Do you work at a hospital in New York? Business Insider would like to hear what you’re seeing on the front lines of the coronavirus response. Email the author at [email protected].