The office as we knew it is dead 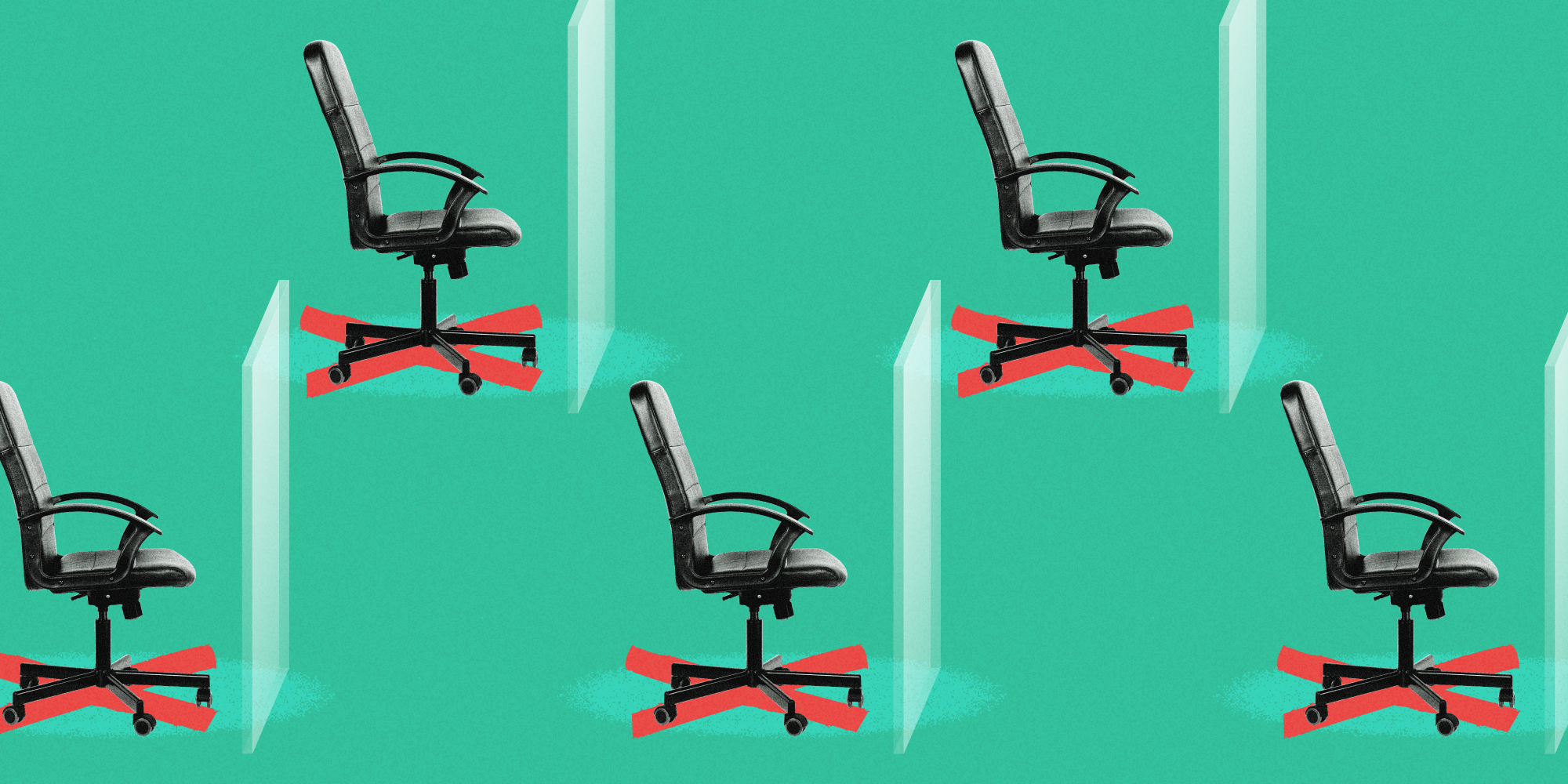 Coronavirus has changed the office forever.

The dense, urban, open-floor plan office has been the defining feature of offices over the last 20 years, with tightly packed flexible-office and coworking locations from companies like WeWork the biggest exemplars of the trend. A recent report by JLL found that up to 70% of all office spaces in the first quarter of 2020 were mostly or partially open floor offices.

These sorts of offices are nightmares for the transmission of a virus that feeds on density, and they may end up as artifacts of the pre-pandemic start of the 21st century. Remote work, rumoured to be waiting in the wings to kill the traditional office since the invention of the fax machine, has finally had its day.

CEOs, like James Gorman at Morgan Stanley and Jes Staley at Barclays, have questioned the need for their pre-virus office square footage. They have had success running their businesses totally remotely, so why not save a couple of bucks on one of their biggest costs.

But the office won’t die altogether. Instead, as the workplace has countless times before, it will evolve. 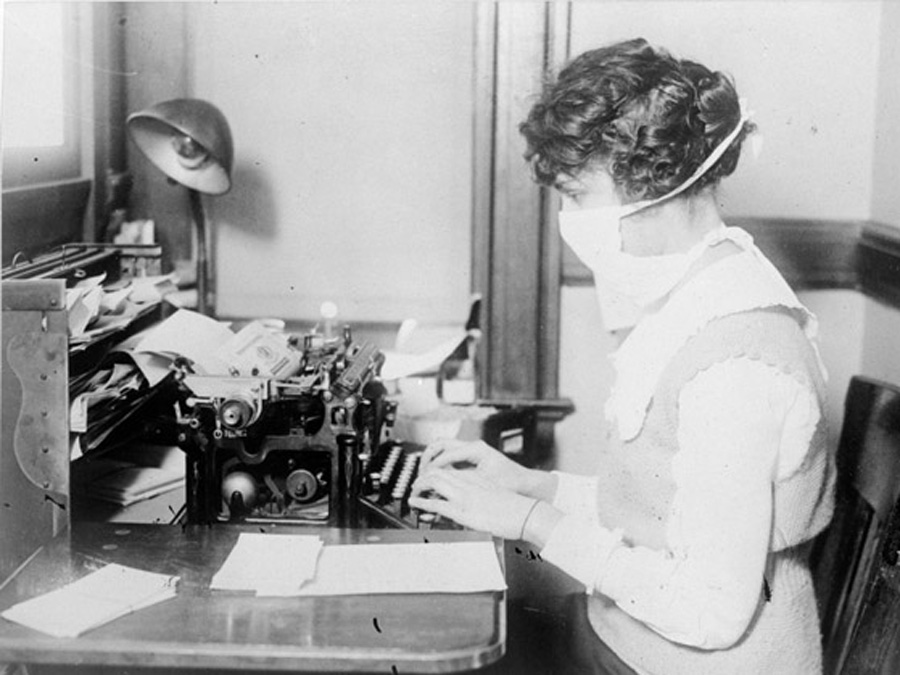 The evolution will begin with the short-term solutions that will make offices safe before a coronavirus vaccine. These changes will act like a bridge to the future of the workplace: some of these short-term changes will stick and some will eventually look as quaint as this photo of a masked-typist clacking away on a typewriter during the Spanish Influenza epidemic.

The long-term evolution of the office will be decided in the coming months and years, as companies rethink their business plans to be flexible and resilient to retain productivity in a crisis.

While the loss of life and psychological pain of the pandemic, and the economic crisis following in its wake, are staggering, businesses are seeing it as an opportunity to make foundational changes to how and where they operate.

The choices that companies make now will decide what the office looks like in five years.


Read more:
The coronavirus is a ‘nuclear bomb’ for companies like WeWork. 10 real-estate insiders lay out the future of flex-office, and how employers are preparing now.

Remote work is here to stay 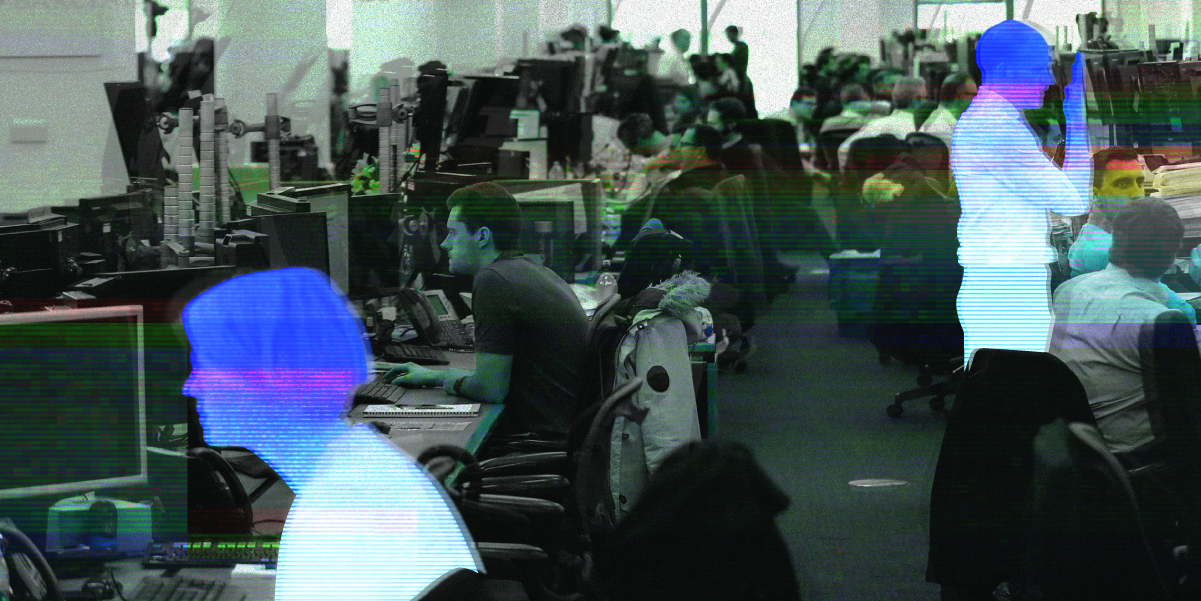 We’re in the midst of the largest work-from-home experiment ever, which will likely be the beginning of a “paradigm shift” towards remote work. Executives and workers alike have seen first hand that business operations can continue online.

A recent Colliers survey found that 4 in 5 employees hope to work remotely at least once a week after the coronavirus crisis ends. A Gartner survey this March found that 74% of 317 CFOs, half of which oversee the financials of companies with revenue above $US1 billion, plan on shifting some employees to permanent remote work.

Some organisations have already changed their remote work guidelines: Zillow’s 5,000 employees will be able to work remotely at their discretion through the end of the year. Others, like Refinitiv, Tradeweb, Nationwide, and the aforementioned Barclays and Morgan Stanley, are signalling that their guidelines will also change.

“We used to joke about meetings that could have been emails, but now we’ll wonder why we can’t just do them in our pajamas with our pets on video conference,” Nancy Dubuc, Vice Media Group CEO, told Business Insider. “There’s a balance of course because some work is actually more productive and better done in person, but it will never need to be 5 days a week, all day every day again.” When these companies begin to shift their business models to accommodate remote work, the office will change. They may cut back on individual workspaces and increase investment in collaborative spaces, turning the office into a cultural and training hub.

“I’m not sure we’ll go back to office seating,” she said. “We won’t need as much real estate because more people will start working from home. That’s a cost saving, and they become more productive.”


Read more:
The CEO of the third-biggest PR firm BCW lays out how the company will outperform its peers in a tough year

Arnold Levin, director of strategy for the southwest at leading architecture and design firm Gensler, told Business Insider about one health insurance client that had been looking to cut down on their 500,000 square foot office portfolio before the pandemic. Levin produced a plan that utilised desk-hoteling to cut the footprint down to 320,000 square feet, and presented it over a video chat in the midst of the lockdown.

The CEO told Levin that their workforce had been so effective at working remotely that they actually would prefer to cut back on an all individual workspace in their offices. They’re now planning to operate in one 80,000 square foot office building, using it for training, large meetings, and to entertain clients. 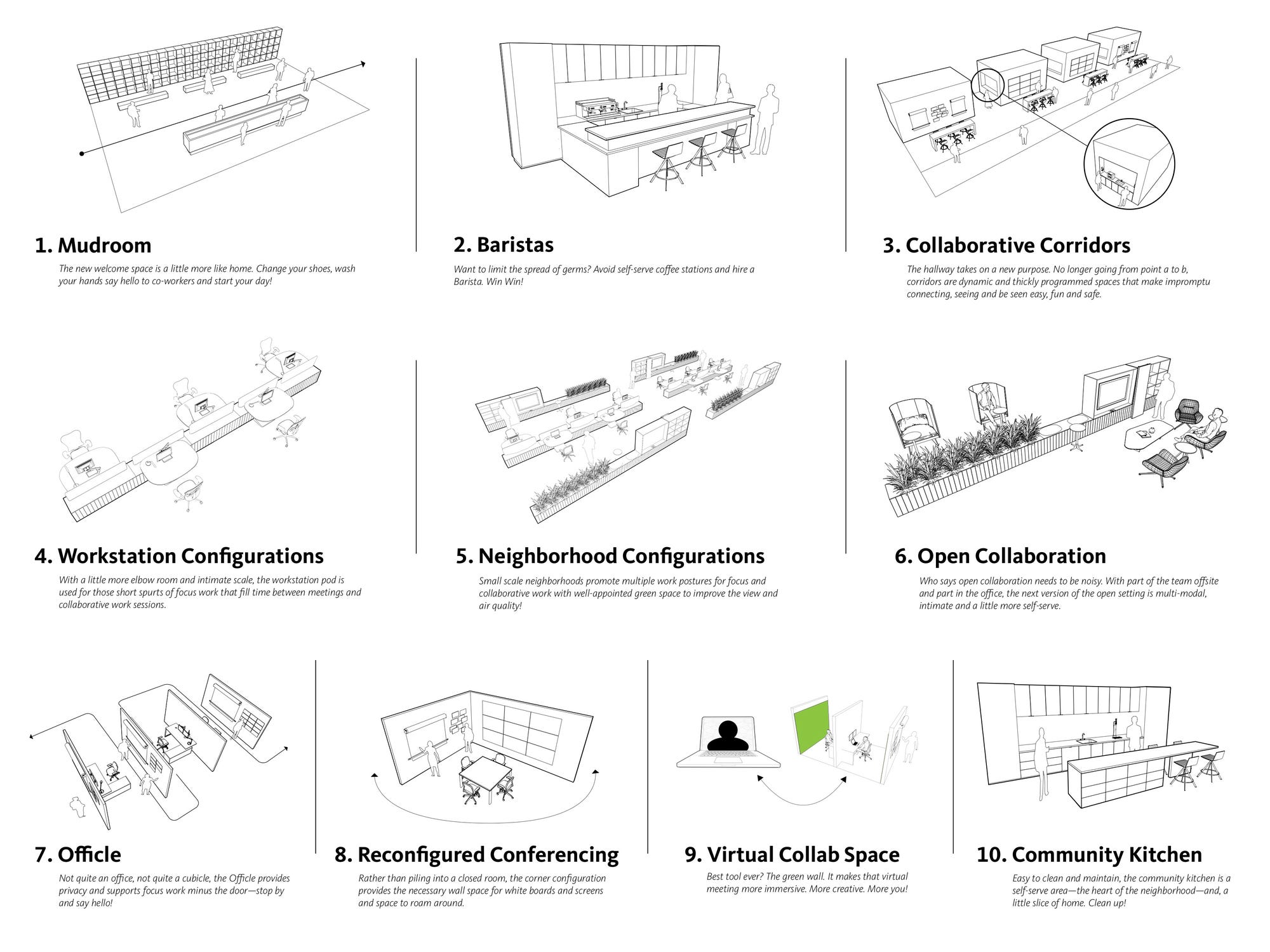 
Read more:
What to expect when you’re back in the office: 7 real-estate experts break down what the transition will look like, and why the workplace may never be the same

If every company were to shrink their footprint as drastically as Levin’s client, the commercial office market would crumble. This is unlikely to happen for a couple of reasons. For one, if less people came into the office, but offices became less dense to make social distancing possible, companies might still need just as much office space.

“We, like everyone else, have dreams of reducing our real estate footprint,” MSCI CEO Henry Fernandez told Business Insider. However, that dream is constrained by the realities of social distancing. 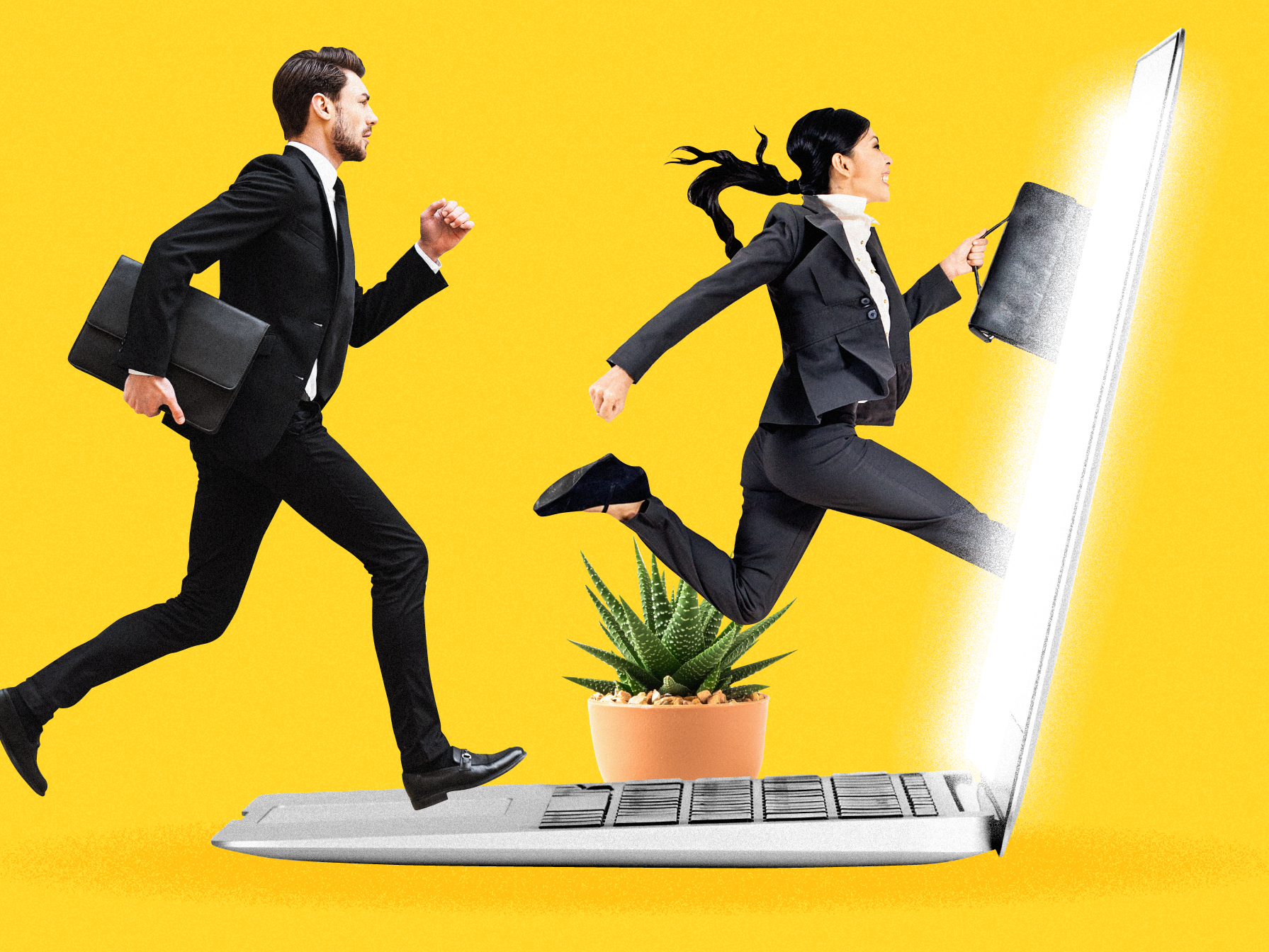 “The flipside of that is whatever real estate you occupy, you will consume a lot more of it because we have to social distance,” Fernandez said.

A whitepaper by Michael Colacino, president at office space company SquareFoot, walks through the reasons why he thinks that the reduction in office space likely won’t approach the roughly 25% decreasethat’s estimated by some experts.

Executives, already most likely to work remotely before the pandemic, would have to give up their dedicated office space, which is usually much larger than a typical employees. Other employees would have to turn to hot-desks (desks that are on a first-come-first-serve basis) and shared workspaces instead of offices or assigned desks.

Hot-desking would lead to an almost-unsolvable coordination problem: how do you make repeatable schedules that prevent the office from getting too crowded while also making sure that the correct people are in the office for any in-person activities, like trainings or meetings? Hot-desking also requires a large amount of cleaning to prevent spread of the coronavirus.

Without workers going remote full-time, the office space won’t be able to shrink much. Colacino’s model predicts that space demand will shrink about 5%. Given the long length of leases and the high costs associated with breaking a lease or finding a subletter, this shrinkage will happen over a horizon of years, blunting the impact.


Read more:
Major tenants are delaying big leases in as they re-think their office space needs for the post-coronavirus world

How do we make offices safe?

Before the advent of a coronavirus vaccine, the near-term return to the office will require lots of operational and technological changes to prevent spread of the virus. The psychological effects of the crisis, and the reality that global catastrophic events are likely to become more common as a result of climate change, means that these changes won’t disappear once the virus becomes a distant memory.

Offices may not feel safe even after a vaccine, and it will be up to companies to make employees feel safe. After 9/11, office buildings in major cities began to add turnstiles and security desks to prevent potential terrorist attacks, and surveillance increased in pretty much every public space. This sacrifice of privacy for security will happen in the office after coronavirus.

Surveillance in a pre-coronavirus office largely meant the watchful eye of a manager trying to see who is scrolling Instagram at their desk or watching a daytime baseball game in the corner of their computer monitor. 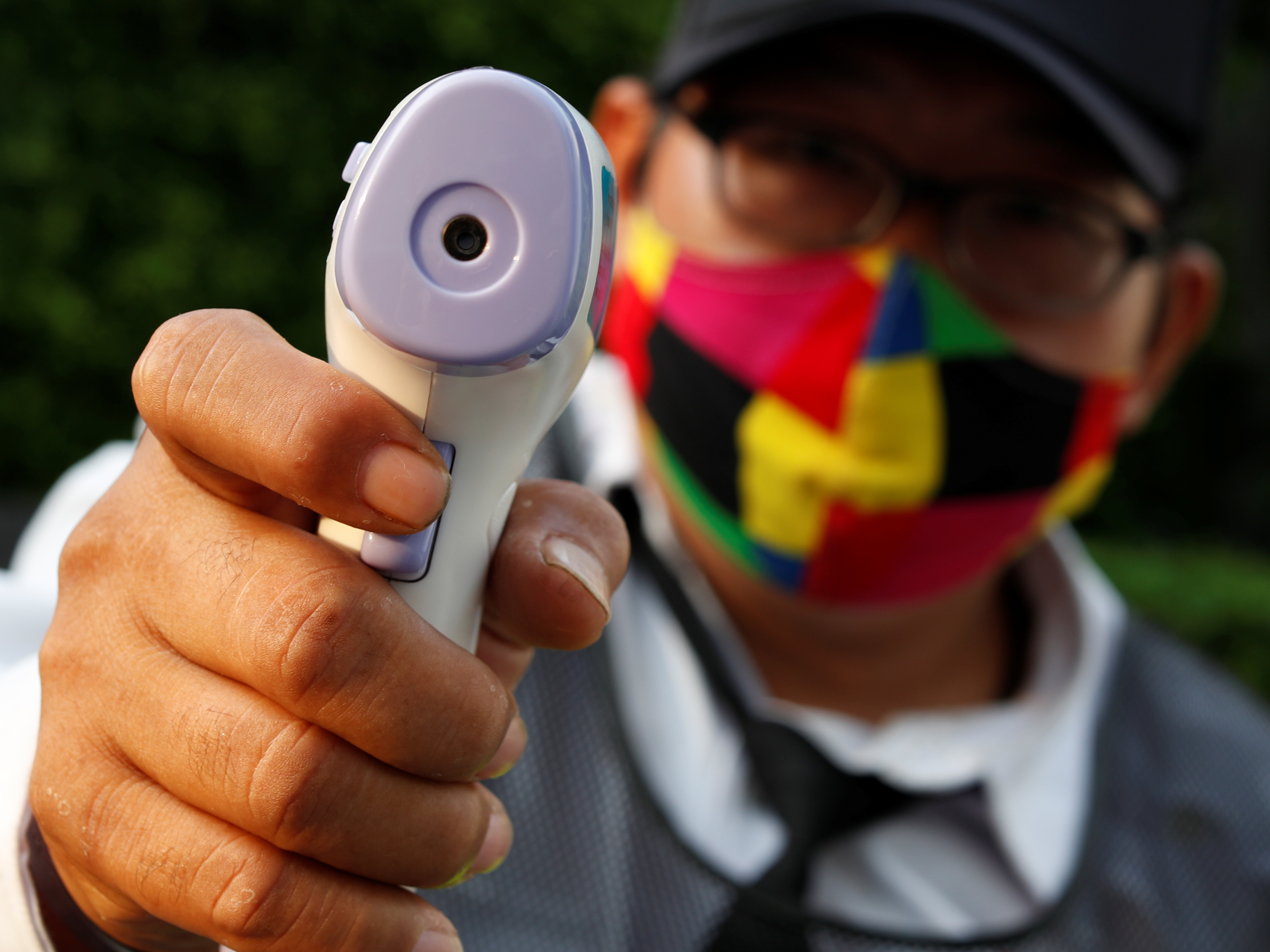 After coronavirus, surveillance will include everything from temperature checks at a building entrance to the mandatory installation of contract-tracing applications on an employee’s smartphone, all of which are allowed under legal guidance offered by the Equal Employment Opportunity Commission and the Centre for Disease Control, according to a Goodwin Procter legal analysis.

In China, 80% of Class A office buildings are requiring temperature checks at the entrance to the building to prevent the spread of the virus, according to a JLL report.

The limiting factor for a lot of these changes is their cost, magnified by the economic tightening underway right now.


Read more:
Mandatory temperature-taking is largely seen as a critical way to return workers to offices. But some big NYC landlords are worried about its effectiveness.

The return of the suburban office

Some businesses are considering alternating desks or erecting temporary barriers in the short-term. In the long-term, companies are considering everything from erecting walled, private offices to moving to suburban office spaces.

A forthcoming report by Dr. Victor Calanog, head of commercial real estate economics for Moody’s Analytics REIS traces the last time the suburban office came into, and out of vogue.

In the 1980s, with crime at approaching record highs and federal and state aid to city budgets shrinking, there was a professional-class exodus from the city to the suburbs. Corporations followed suit on a slightly delayed time scale, given the length of typical office leases: from 1989 to 1997, suburban market inventory expanded 1.7 times faster than inventory in cities’s central business districts. 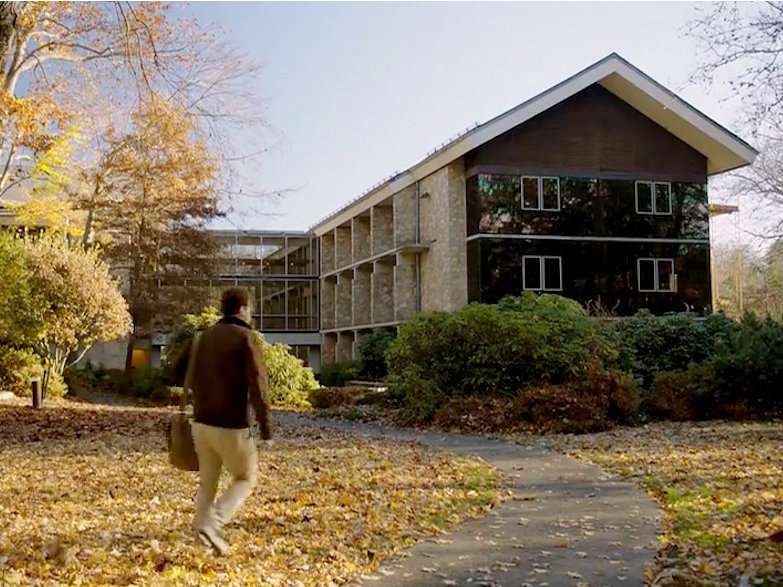 By 1997, suburban office vacancies were 1.8% lower than central business district vacancies, and by 1998, the Building Owners and Managers Association said that the suburban office will be the top real estate investment of the next five to ten years.

That did not come to pass. City budgets increased, crime fell, and professional workers began to move back to the city. Simultaneously, internet technology and increasing office density lowered demand for office space. The city became the ideal location for office space once again.

This cycle may repeat itself, with the pandemic replacing crime and budgetary constraints. After 9/11, Morgan Stanley moved employees to offices in Westchester County, New York a suburb outside Manhattan. Before the total coronavirus lockdown,Morgan Stanley moved traders back to the same office again.

Why is this time different?

Levin, from Gensler, told Business Insider that consultants thought the Great Recession would be the catalyst for the future of the office, where “everyone will be like Google.” 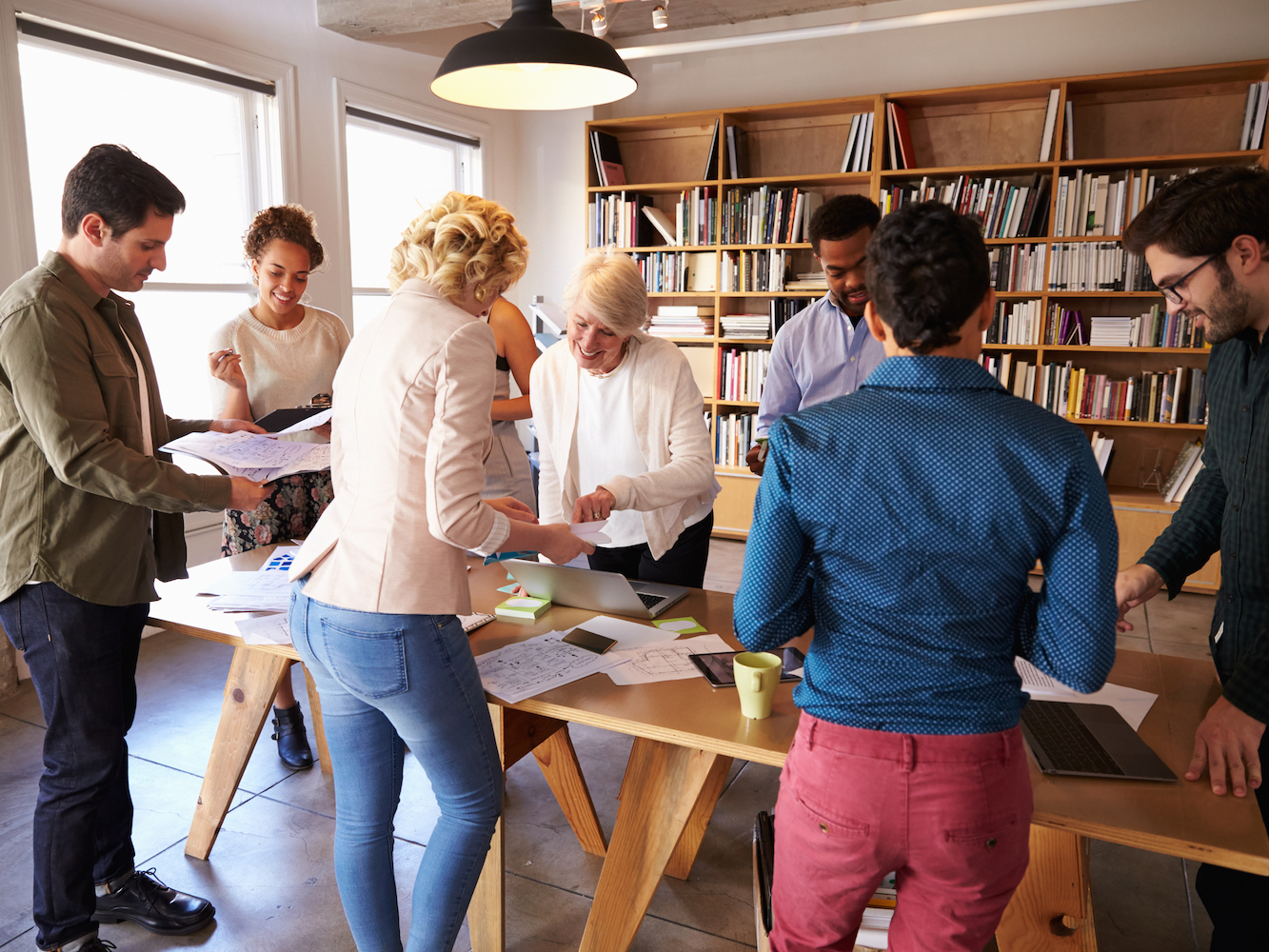 The mood at the time is best summed up by a Rahm Emmanuel catchphrase from 2009, by way of Macchiavelli and a pit stop with Naomi Klein: “Never let a crisis go to waste.”

“People had short-lived memories,” Levin said. “Some changed, but a vast majority went back to cramming as many people into a space as possible.”

This time is different, says Dr. Calanog, because of the international scope of the change and the duration of the shock, which still has no obvious end date.

Levin said that, instead of focusing on tactical changes or the ideal model for the future office, he’s asking clients deep questions about their goals and principles and the threats to their current business model.

“The best thing is to avoid clever trends and quick fixes, and have organisations face this new reality,” Levin said.

Levin said the organisations that are using this time to realign their business model to be more adaptable will be the most successful going forward. Any changes they make to their office and workplace should flow from that realignment.

“I think organisations are going to see more of a connection with a need to change their business models and how the workplace connects to that for the first time.”