There is no American exceptionalism. The pandemic proves it.

Our goal is to provide you with insight and analysis about the big stories of the day – “Insider in your inbox.”

Thanks as always for reading. Please feel free to reply to this email and tell us what you like or don’t like, and we’ll evolve and improve as we go. And if you’re enjoying the newsletter, please forward to your friends.

SUMMARY:
Is this the end of American exceptionalism? Elon Musk’s factory gambit. Why Ohio’s governor is so popular. Jogging while white. What airports will be like, post-pandemic. Can we just give up on business travel forever?

Has the pandemic finally crushed the idea of American exceptionalism? 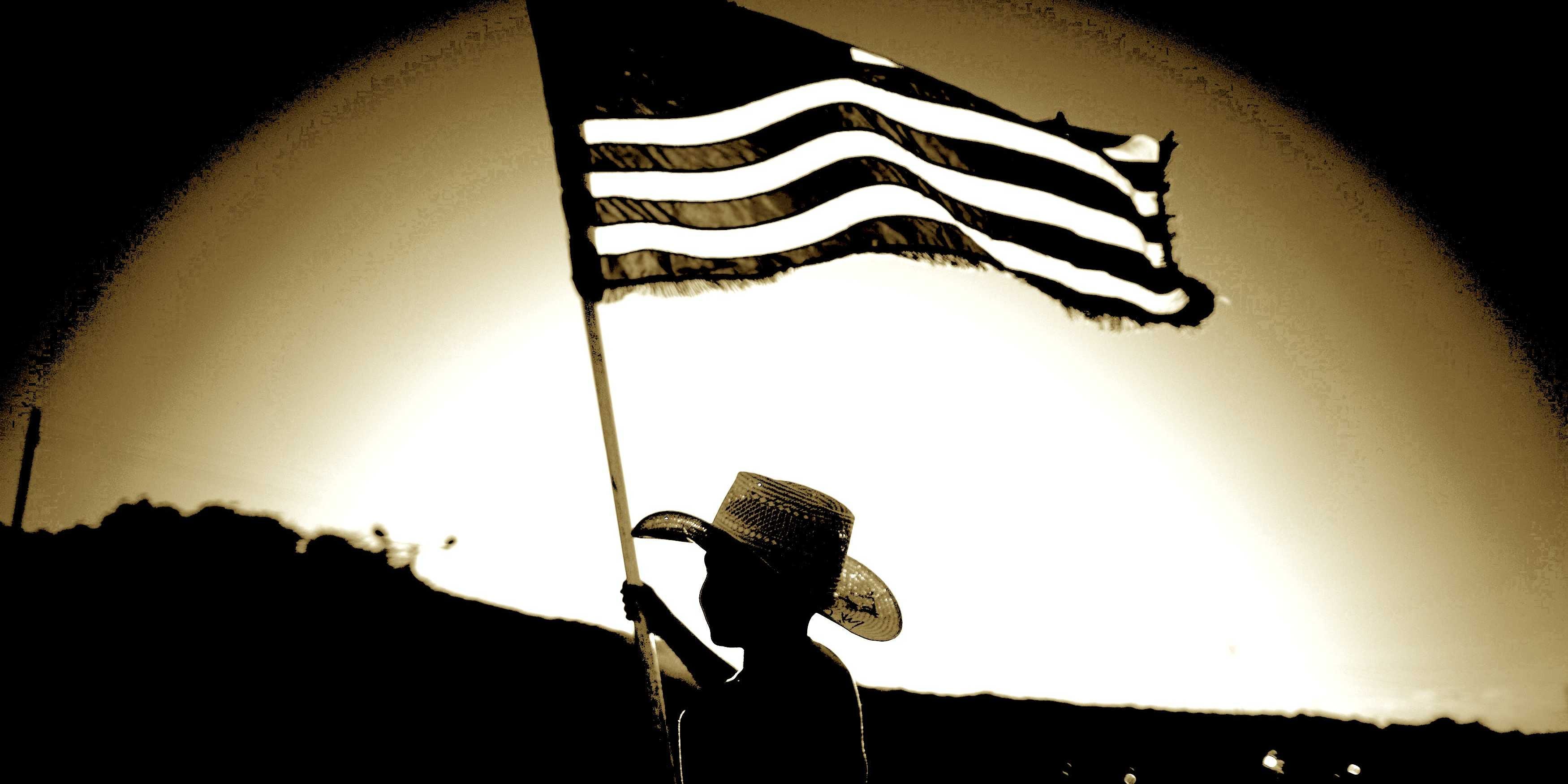 “Everybody gets a trophy.”

That’s a favourite scornful phrase among conservatives who think America’s being weakened by liberal affirmation culture. Critics of affirmation culture say that “everybody gets a trophyism” is delusional because it doesn’t face the honest fact that some people, some organisations, some countries do things better than others.

During the pandemic, it’s those who usually deride affirmation culture who are falling victim to it. The story that President Trump and many of his allies are telling about America’s pandemic response is that we’re doing an amazing job. On Monday, the president announced that we had triumphed over the pandemic. “We have met the moment and we have prevailed,” he said, later saying that he was referring to the growth of US testing capacity.

The president declares that our testing is the best, our healthcare system is the best, our economy will recover the best. And yet any honest review of the facts makes clear that the US’s coronavirus response is still one of the worst in the developed world.

The top level of our federal government, gutted of talent, filled with lapdogs, and sceptical of expertise, has botched the national response. Nearly three months into the crisis, we have no national strategy to contain the spread, wildly uneven distribution of PPE, and rates of testing that are multiples lower than what we need – and what we were promised.

We need only look at how other countries have addressed the crisis to face the honest fact that we deserve no trophy. And it’s not just a few countries that are leaving us in the dust: Almost every country facing the pandemic has brought its caseloads and death rates down faster than the US because they trusted in experts, planned for catastrophe, and built a centralised infrastructure for tracking and tracing.

This week in Germany, students gave themselves coronavirus tests and went to school. On Tuesday in South Korea, people went to bars (except in Seoul, where the city has temporarily closed restaurants after an outbreak last week). We’re not the worst, but we’re so far away from being as good as we pretend to be. We still love to talk about American exceptionalism, but in this case American exceptionalism means only that we’re exceptionally mediocre.

This would be more tolerable if we had the integrity to be honest about our mediocrity. The president and his allies are essentially shoving their fingers in their ears, and asserting greatness. The president claimed again on Monday, as he did back in March, that everyone can get a test, when we all know everyone can’t.

The White House undermines pandemic data, to try to delude people into thinking the pandemic is over. The president’s team even distributed one model that, nonsensically, suggested that COVID-19 deaths would drop to zero by this weekend. The governor of Arizona tried to muzzle scientists sharing factual data about the spread of the virus there because he didn’t want Arizonans to hear that the peak was still to come.

No one can stop the president from bragging about his pandemic achievements. No one can even stop him and his administration from sharing dishonest data to make their pandemic response seem capable.

But telling ourselves we’re doing a great job when we aren’t does not actually stop the deaths, the job losses, and the fear, and it doesn’t hide from us the images of Germans, Koreans, and New Zealanders safely getting back to school and work.

There is a chance for America to redeem itself. We still have the best scientific researchers in the world, and the pandemic will not end anywhere till we have a treatment or a vaccine. I’d still bet on American scientists to develop these first.

As Winston Churchill (reportedly) said: Americans can always be trusted to do the right thing, once they have tried everything else. Let’s hope we soon start doing it. -DP

Once again, Musk rolls the dice. 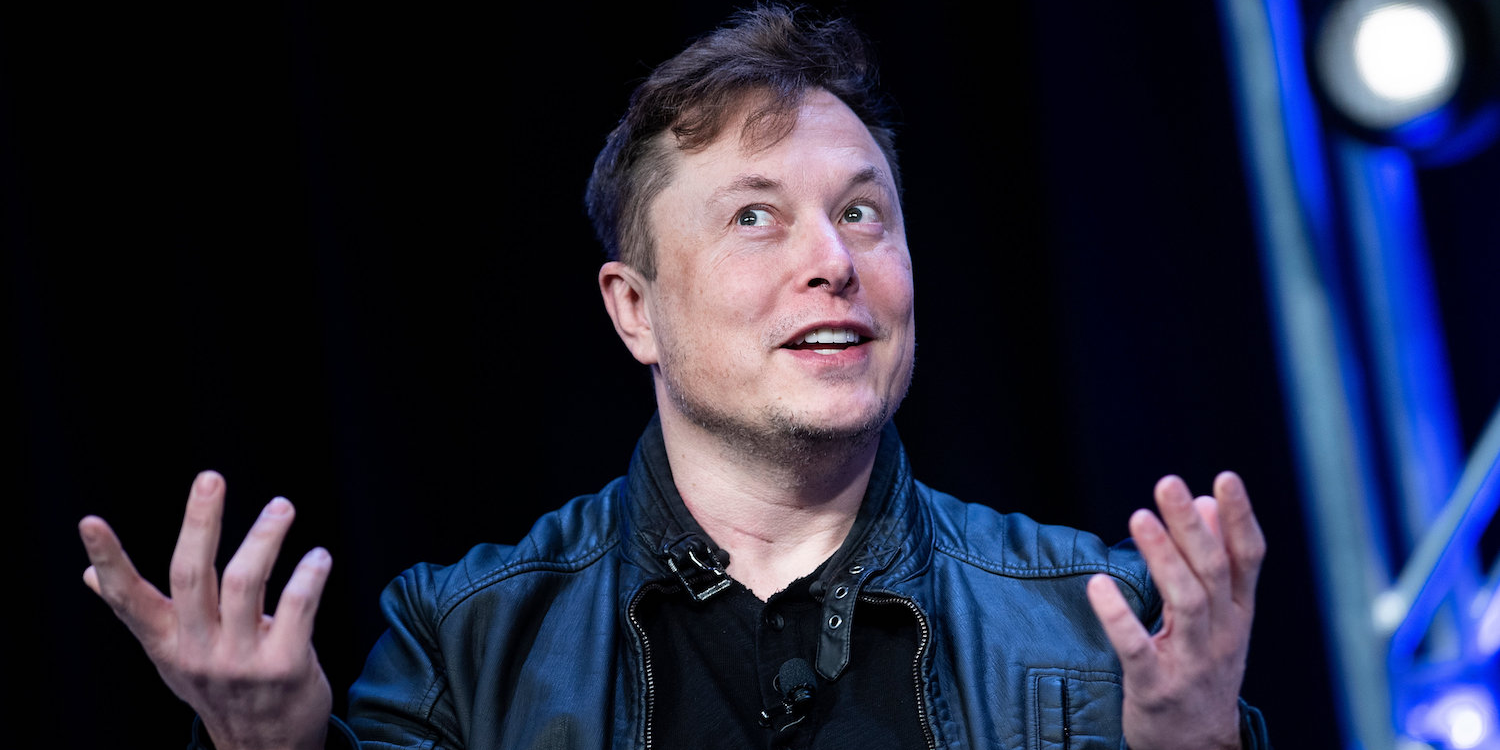 Lots of entrepreneurs pat themselves on the back for taking big risks – even when they’re not actually taking them. (Losing other people’s money and having to get a new job if you fail actually isn’t that big a risk.) But Elon Musk, one of the most successful and inspiring entrepreneurs in history, does actually take big risks. And, today, he’s taking another one.

Musk has reopened Tesla’s Fremont California factory, in defiance of the rules of the California county – Alameda – in which the factory is based.

In a tweet, moreover, Musk has said that he himself will be working on the assembly line and suggested that, if local authorities enforce the county’s restrictions, he should be the one to be arrested.

Even bolder – and the point that Musk’s critics are jumping on – is that, if the county’s restrictions are sound, Musk may be taking risks with his employees’ health.

No matter how frustrated Musk and other Silicon Valley go-getters are about California’s tight coronavirus restrictions- and they are very frustrated – the goal of the restrictions is to reduce infections and deaths. So if Musk and Tesla are going to defy these restrictions, they had better be highly confident that they can protect their employees.

In his defence, Musk says he is confident of this. He says Tesla has learned how to protect employees from its manufacturing experience in China. The company has produced a “Return To Work” playbook that details the measures the company has put in place.

Alameda County has responded wisely to Musk’s gambit. Instead of sending a squad car to the plant to drag Musk off the floor in handcuffs, it has said it will deal with the company with the same “phased approach” that it has dealt with other companies that aren’t following the rules. If Alameda functions the way other local governments do, one imagines that this “phased” approach may take time.

Behind the scenes, Tesla and Alameda have been working on a reopening plan that would have allowed Tesla to restart production early next week. If Alameda is comfortable with the company restarting production in six days, Tesla workers are probably pretty safe today.

Musk’s defiant reopening and tweets, however, raise the stakes, and do more than buy him and Tesla a few more production days.

Given the growing national frustration with coronavirus restrictions, they position Musk and Tesla as innovative, bold Davids battling against a bureaucratic Goliath. -HB

Why Ohio’s Republican governor is wildly popular, and Georgia’s isn’t. Governors are having a good pandemic. While the president’s approval rating continues to slump in the 40s, a Washington Post-Ipsos poll finds that

71% of Americans approve of the job their governor is doing on the outbreak, and only 27% disapprove. But there’s an interesting disparity between the ratings for two Republican governors, Mike DeWine of Ohio and Brian Kemp of Georgia.

DeWine’s handling of the pandemic is most admired in the country, with 86% approval in Ohio. Astonishingly, while 84% of Ohio Republicans approve of how he’s doing, even more Democrats – 90% – approve.

Kemp, by contrast, is the only governor with lower approval ratings in his state than the president. Only 39% of Georgians approve of his handling of the crisis, and Democrats overwhelmingly disapprove.

What’s the difference between Ohio and Georgia?

DeWine moved early to shut down his state, has pushed hard for testing, and has a government that’s clear and transparent about sharing data and advice. There’s plenty of partisan rancor in Ohio, but DeWine has strongly supported the experts in his administration.

Kemp has practically been a coronavirus sceptic. He learned that it spreads asymptomatically about a month after everyone else did. He shut down Georgia well after he’d been advised to, and he opened it up way, way before experts wanted to – so early that it even irked the president. That push to reopen has generally hurt his popularity, with 65% of Georgians saying he opened too early.

DeWine’s popularity today doesn’t mean he’ll coast to reelection in 2022, but it’s a telling lesson that – at least during a pandemic – caution, clarity, and calm are good politics.-DP

Would a white man get killed for running suspiciously through a neighbourhood? 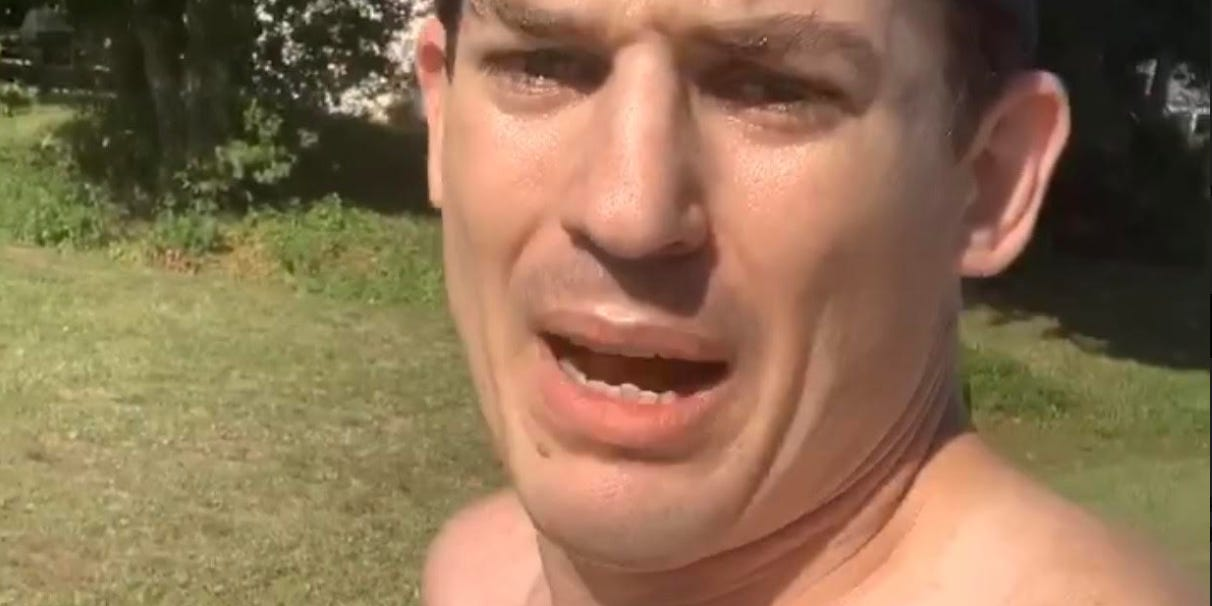 The murder of Ahmaud Arbery, a black man chased down and killed while jogging in a Georgia neighbourhood, inspired a white man named Richard Demsick to create a brilliant piece of political theatre.

As Insider reports, the 34-year-old Demsick ran shirtless, hat on backward, through a largely white Florida neighbourhood … while carrying a flat-screen TV.

Even though the neighbourhood had recently had several robberies, residents smiled and waved at him, and none called the police or tried to stop him. Demsick filmed the run for TikTok, where it now has more than 1 million views.

Does this prove that Arbery’s race caused his murder? Of course not. But it’s a dark reminder that we see different people differently because of their skin colour. -DP 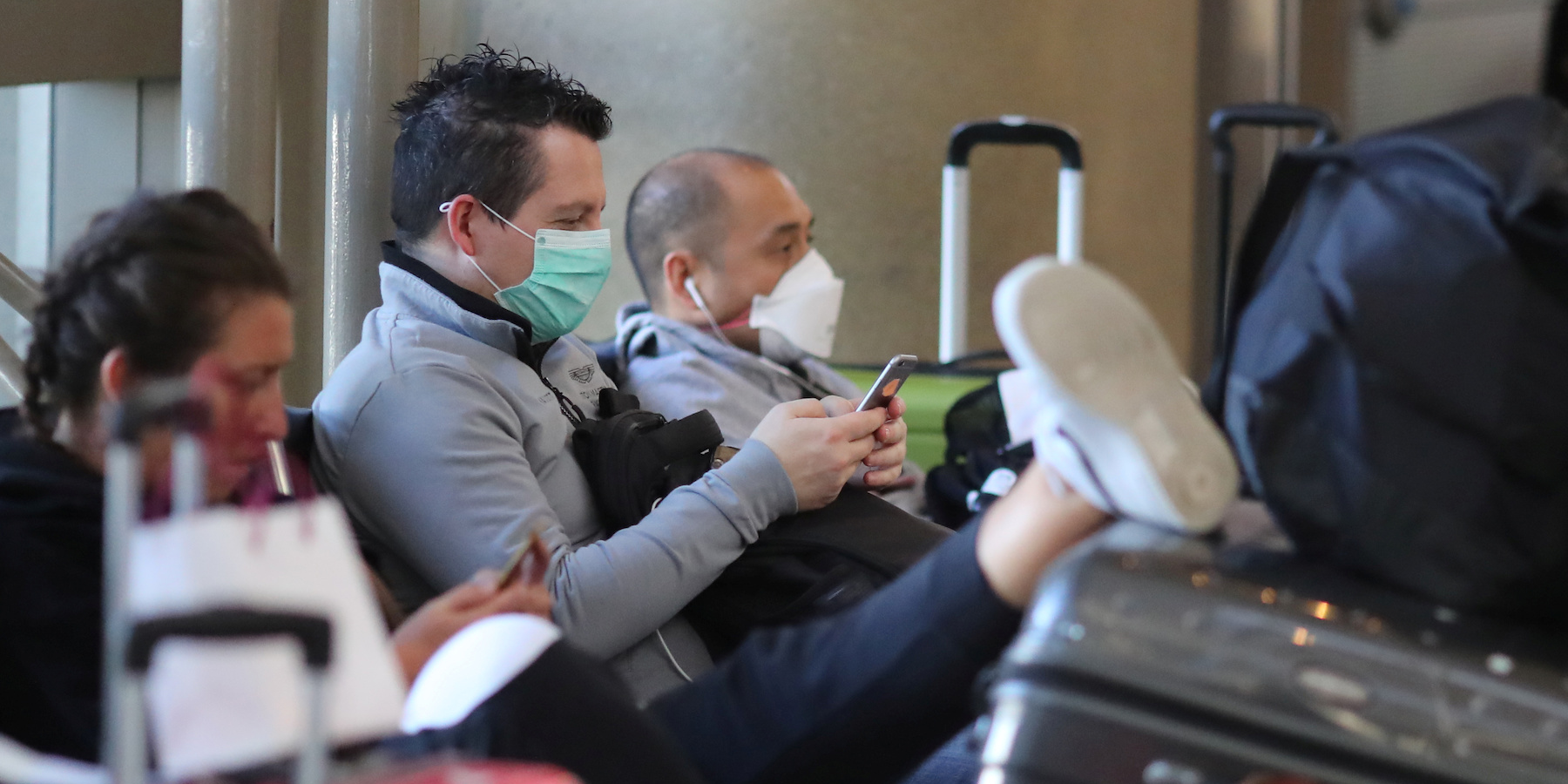 REUTERS/Lucy NicholsonPeople wear masks at the international terminal at LAX on March 11, 2020.

Post-pandemic airports will be crammed with temperature sensors, require masks, and have all kinds of new touchless technology, among other changes, according to Thomas Pallini’s fascinating Insider interview with the CEO of a company that runs airports.

For a much gloomier take, this essay in the Atlantic says commercial aviation will be terrible (and really expensive) for a long, long time because of fear and low demand.-DP

So, can we finally give up needless business travel forever?

Many of us former road warriors have discovered that we can do our jobs fine using cheap, widely available videoconferencing services like Google Meet and Zoom.

Many of us have also remembered how much time we used to waste in airports, hotels, and planes instead of with our families, colleagues, and friends. So we’re wondering whether we can finally take advantage of this crisis to collectively decide that we don’t need to do that again.

The entrepreneur Martin Varsavsky, for example, who is now hunkered down with his family in Spain, just tweeted the following: “I used to travel a third of my work days. So much time wasted on Ubers, security lines, flights, hotels. Please everyone please let’s accept video as the new normal!”

So how about it, fellow professionals?

Can we agree to save oodles of time, money, and jet-lag and reserve in-person trips for the few occasions in which in-person is critical?

Or do we have to go back to expensive, exhausting, schlepping as usual? -HB

A mask factory cancelled a Trump visit because it feared it would spread the virus.

The US president was going to visit the Pennsylvania factory on Friday, but the factory bosses asked him to postpone it, to keep workers safe and the factory humming.

“Why are you saying that to me?”

A Chinese American reporter calls out Trump for singling her out with his anti-China remarks.

A hack for removing the tough white tendons from chicken breasts.

It’s all anyone on TikTok is talking about.

*The most popular stories on Insider this morning.

Thank you for reading! Please let us know what you think. If we think other readers will enjoy your note, we’ll publish it!


To view this newsletter on our site, click here.