The coronavirus-hit Grand Princess cruise ship is unloading passengers in Oakland, California. Here's a full timeline of the ship's outbreak. Stephen Lam/ReutersThe cruise ship Grand Princess, held at sea as tests for coronavirus were conducted and arrangements made to offload passengers at the Port of Oakland, passes the Golden Gate bridge in San Francisco, California, March 9, 2020.

The Grand Princess is unloading all of its passengers in Oakland, California after a string of coronavirus cases brought the cruise ship into port.

The San Francisco-based ship sat in limbo off the coast for days after three passengers from its previous voyage tested positive for the new coronavirus. One of those patients died in Placer County, the state confirmed, becoming California’s first reported coronavirus death.

Since then, more passengers and crew have tested positive, and authorities are enacting a new quarantine plan.

Here’s everything we know about the ship and what will happen next.

On the Grand Princess, 21 people have tested positive for the new coronavirus. A former passenger died from the illness in California. The person who died of the coronavirus in California was on the Grand Princess from February 11 to 21.

Two other passengers on that trip went home and later tested positive for the coronavirus, the Centres for Disease Control and Prevention (CDC) confirmed in an email to Business Insider.

Princess Cruises said that 62 passengers on board the most recent trip were also on that prior voyage.

Instead of sailing to Ensenada, Mexico as planned, the ship turned back towards San Francisco. But California Gov. Gavin Newsom did not allow it to dock in the city. 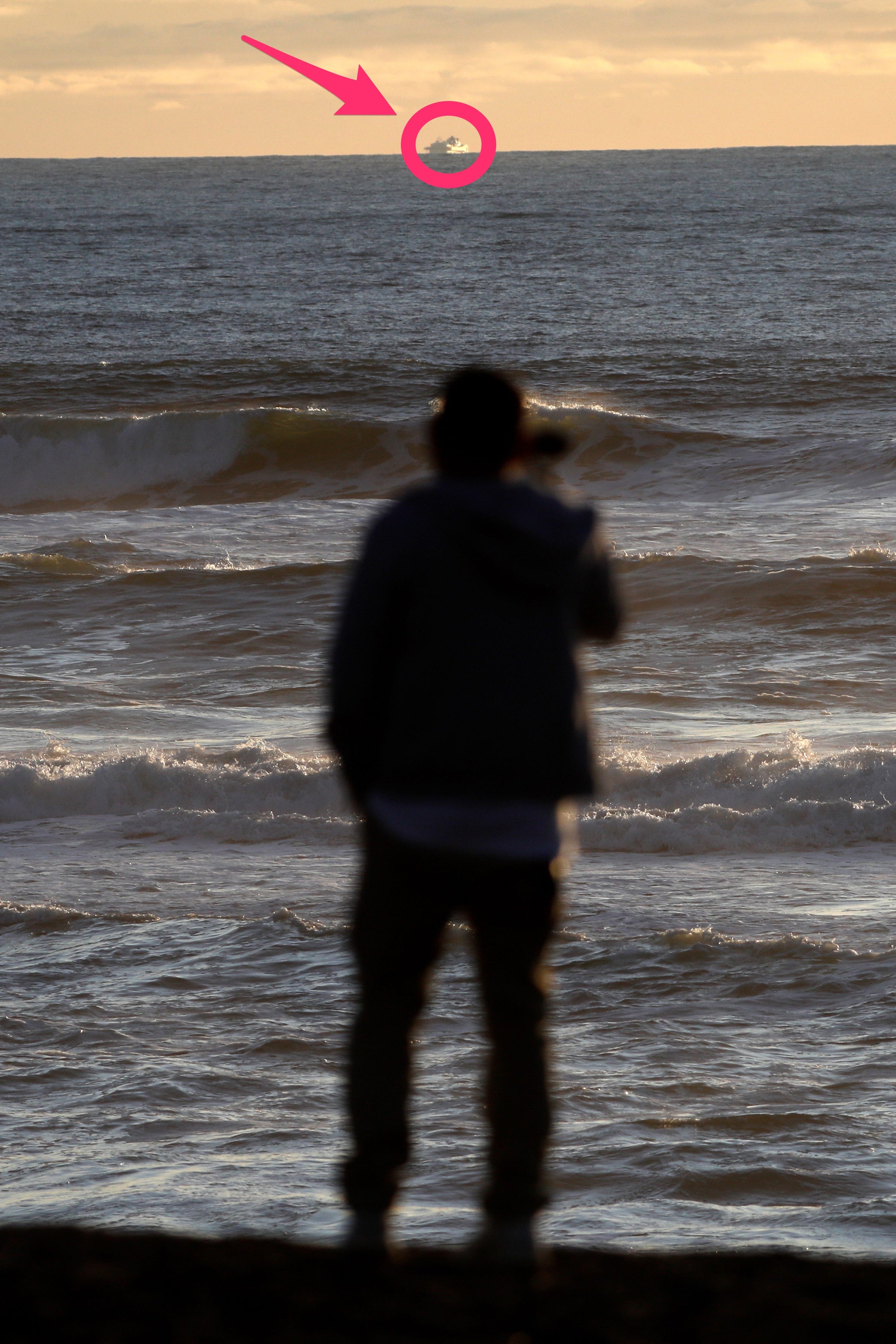 “The logistics of that [dock] site along the Embarcadero, the proximity to residences, the disruption that would have ensued, was such that we determined that was not the appropriate site,” Newsom said in a press briefing on Sunday.

What’s more, some people on the ship had begun showing symptoms. The CDC wanted to test them for the coronavirus before they disembarked.

As the ship waited for further instructions from government officials, 2,422 passengers and 1,111 crew members hung in the balance. 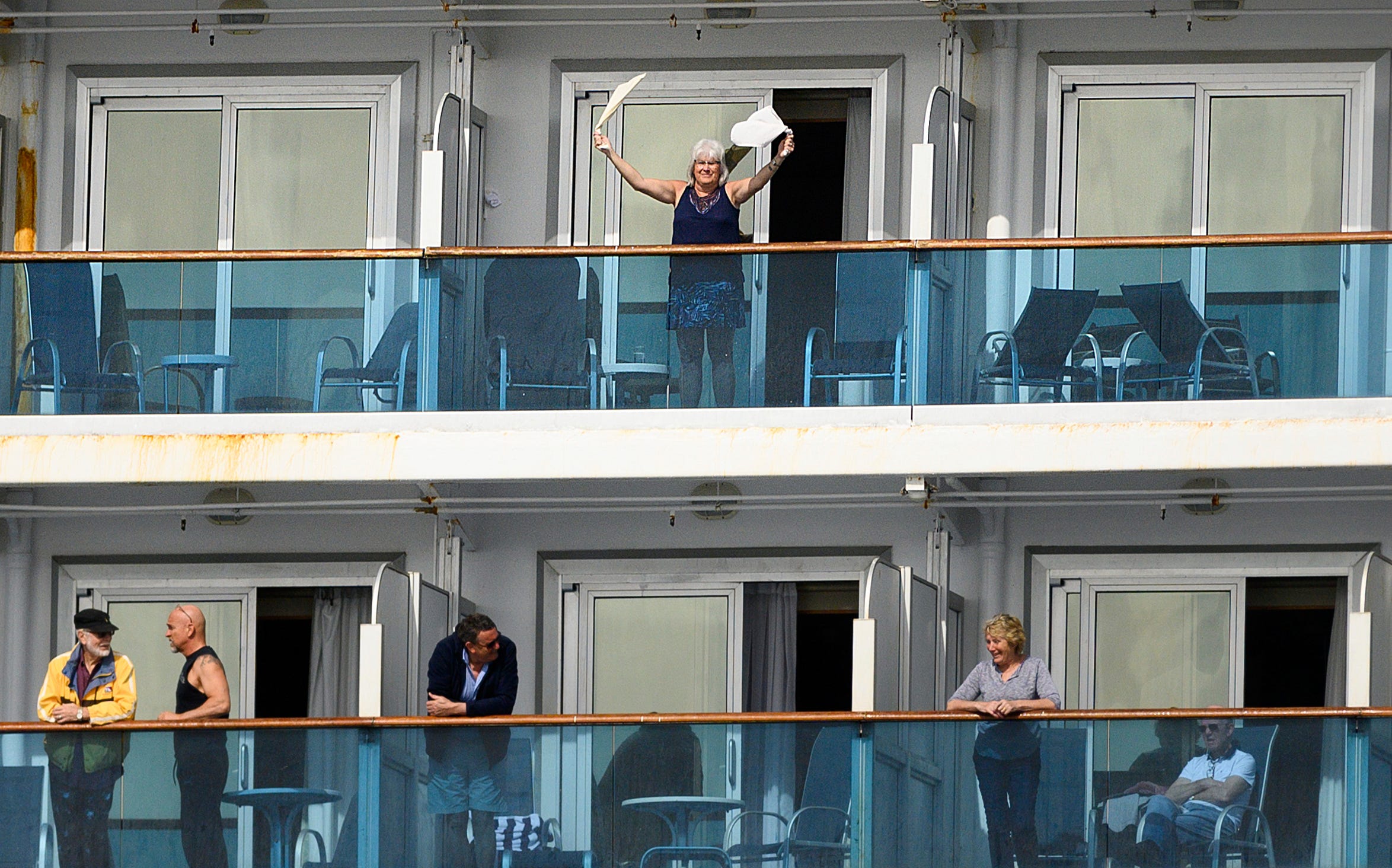 Noah Berger/AP PhotoA passenger waves aboard the Grand Princess off the coast of San Francisco as a media boat approaches on Sunday, March 8, 2020.

Working with the CDC, staff on the ship identified 46 people to test for the virus. That included guests who were “under care for respiratory illness,” the company said, along with passengers and crew members showing symptoms, and all passengers who were on the previous voyage.

The US Coast Guard flew coronavirus test kits out to the ship via helicopter on Thursday.

In an attempt to contain possible #coronavirus patients, officials have ordered the Grand Princess Cruise Ship near San Francisco to stay back until nearly 3,500 people can be tested.

Video taken by the California National Guard 129th Rescue Wing on Thursday showed officials dropping out of a helicopter to deliver packages of testing kits to the top deck of the cruise ship.

After medical staff administered the tests, helicopters returned them to a lab in Richmond, California. 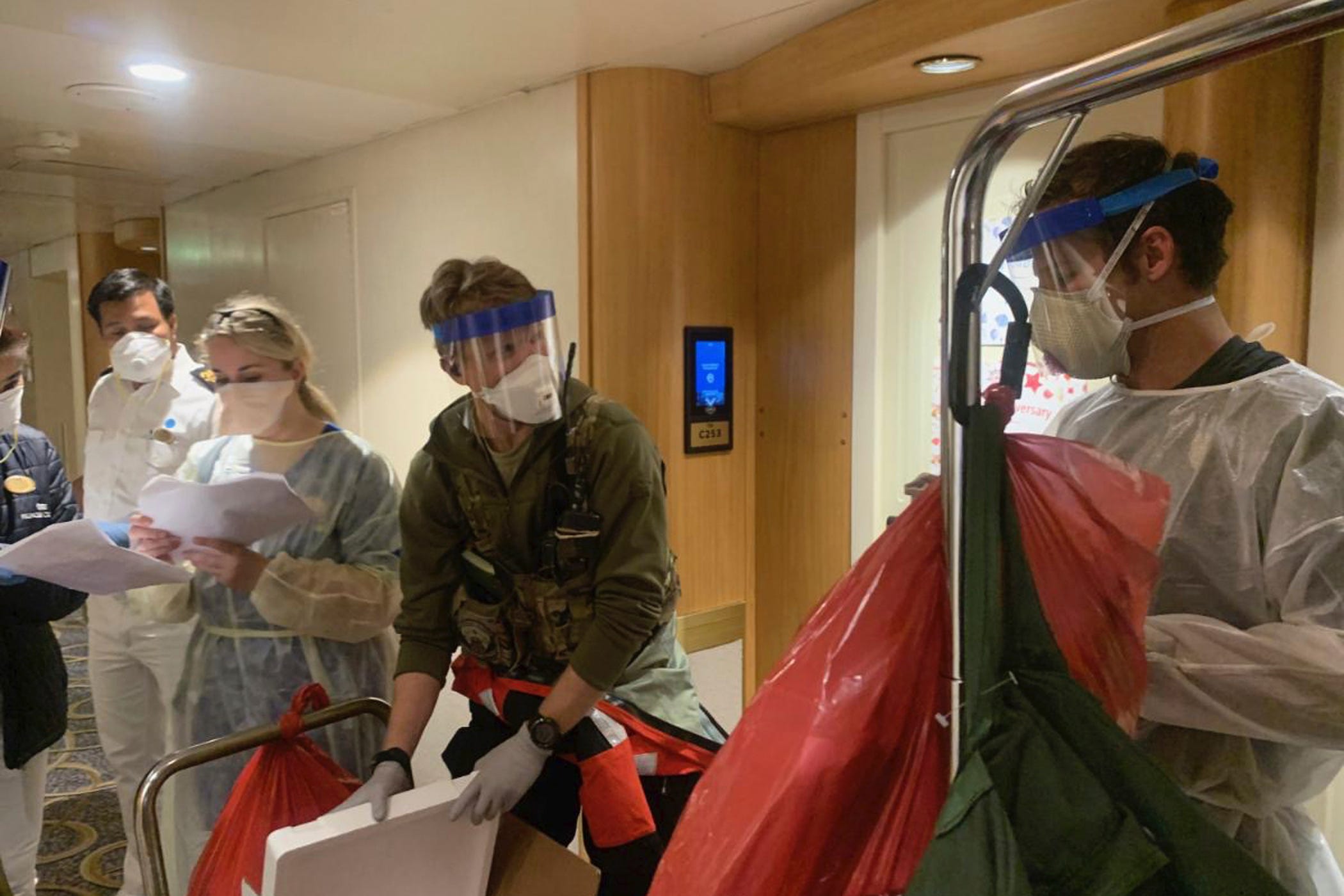 While they waited, some passengers wondered why the cruise line had not been more proactive about identifying sick people at the beginning of their voyage.

One passenger, Ter Soloman, told the Los Angeles Times that they were merely asked to self-report any health issues on a piece of paper, though he noticed many passengers “coughing and hacking” and still being allowed to board.

“Why was there no health screening when we boarded? I had expected to have my temperature taken,” Mark Pace, another passenger, tweeted at Princess Cruises. “People that spent thousands of dollars on a cruise are not going to answer truthfully on your health form.”

While waiting for the tests to arrive, most passengers could still roam freely about the ship.

Until Thursday evening, the cruise line said, only passengers and crew members identified for testing were asked to stay in their cabins.

But on Friday, 21 of the tests came back positive, prompting the cruise line to ask all passengers to stay in their rooms.

Of those who tested positive, 19 were crew members, and two were passengers. 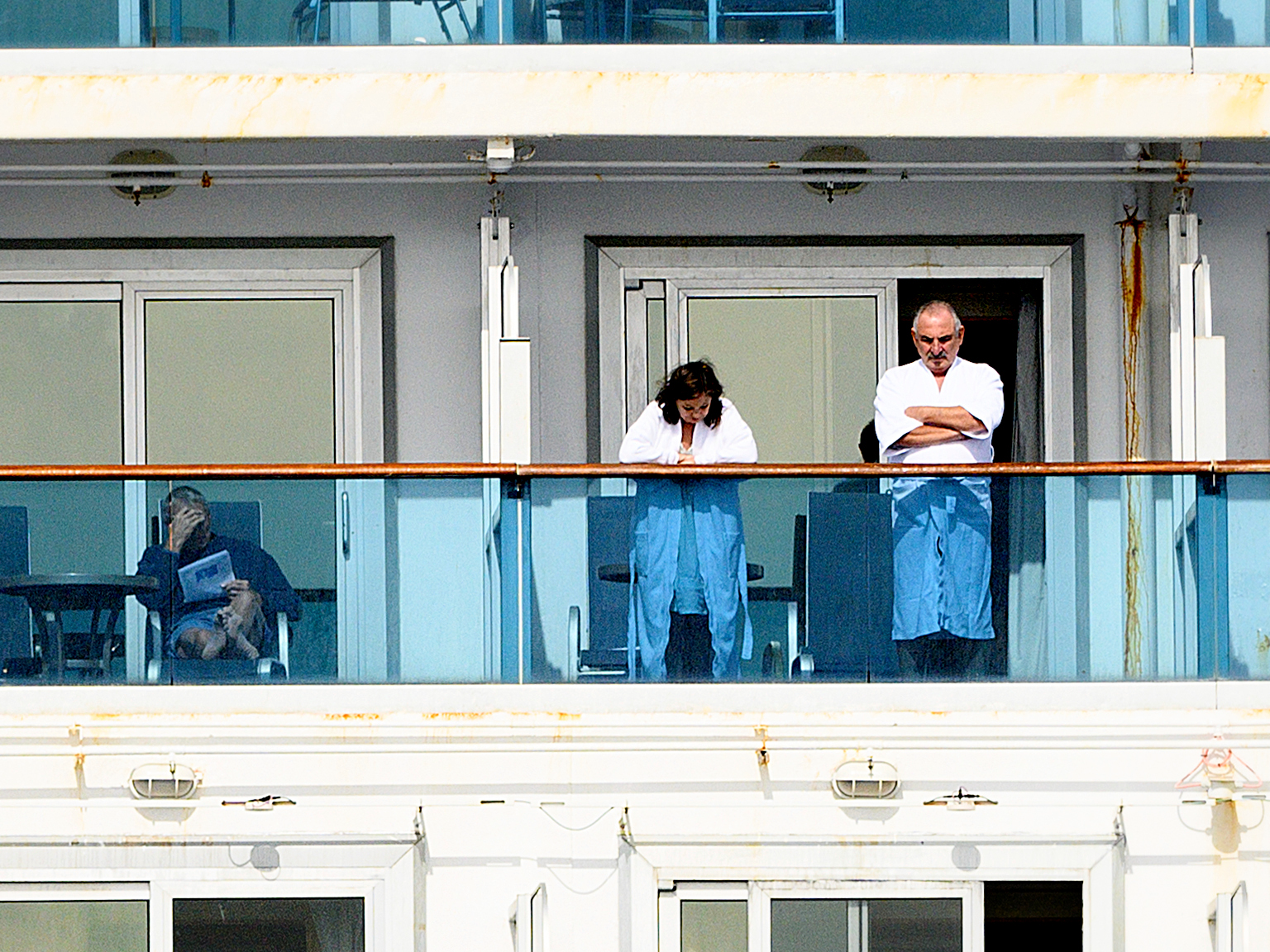 Associated Press/Noah BergerPassengers look out from balconies aboard the Grand Princess as it cruises a holding pattern about 25 miles off the coast of San Francisco on Sunday, March 8, 2020.

Vice President Mike Pence broke the news in an address on Friday, and some passengers said that’s how they found out.

The captain of the Grand Princess was also unaware of the test results, according to those onboard. Passenger Debbi Loftus toldCNN that she heard the results on the news and called down to have the information passed along to the captain, who later made an announcement.

According to The Washington Post, the captain told passengers “we were not given advance notice of this announcement by the US federal government.”

Crew members brought meals to passengers’ rooms. Some said the food was “terrible,” but others were happy with it.

“The food is rotten and terrible and we have to fight for it,” passenger Margaret Bartlett told the BBC. “It is not good enough.”

But Jose Galan, who was on the cruise with his wife, Victoria, told Business Insider that he was surprised to see Bartlett’s comment.

“I’m not sure what more the cruise ship could have done,” Galan said. “Everyone on this ship, the captain and the crew, have been absolutely wonderful.”

Some passengers were not satisfied, though.

One couple has filed a lawsuit against the cruise line, alleging “gross negligence” in allowing passengers to be exposed to the coronavirus.

As officials scrambled to make a plan for the Grand Princess, everyone had another cruise ship outbreak on their minds: the Diamond Princess in Japan. Reuters/Issei KatoFamily members of passengers onboard the cruise ship Diamond Princess wave and talk to them on the phone at Daikoku Pier Cruise Terminal in Yokohama, Japan, February 11, 2020.

The ship sat in the port of Yokohama, Japan, for about three weeks in February as the local government placed everyone on board under quarantine. In the end, more than 700 people who were on the Diamond Princess tested positive for the coronavirus.

Experts have criticised the Japanese government’s decision to keep passengers and crew on the Diamond Princess, and some have said the quarantine procedures may have even helped the virus spread.

“I’d like to sugarcoat it and try to be diplomatic about it, but it failed,” Anthony Fauci, the director of the National Institute of Allergy and Infectious Diseases, told USA Today. “People were getting infected on that ship. Something went awry.”

The two ships are from the same cruise line.

President Donald Trump initially said he wanted to keep the passengers on the ship so they wouldn’t raise the total case count in the US.

“I like the numbers being where they are. I don’t need to have the numbers double because of one ship that wasn’t our fault,” Trump said in a Fox News interview during a visit to the CDC.

But Trump said that he left the decision to the experts he consults, even though he disagreed with them.

“It wasn’t the fault of the people on the ship either, OK? It wasn’t their fault either, and they’re mostly American, so I can live either way with it,” he added. “I would rather have them stay on personally, but I fully understand if they want to take them off. I gave them the authority to make the decision.”

The CDC and local authorities decided to send the ship to Oakland, across the bay from San Francisco, and take passengers off to be quarantined on land. 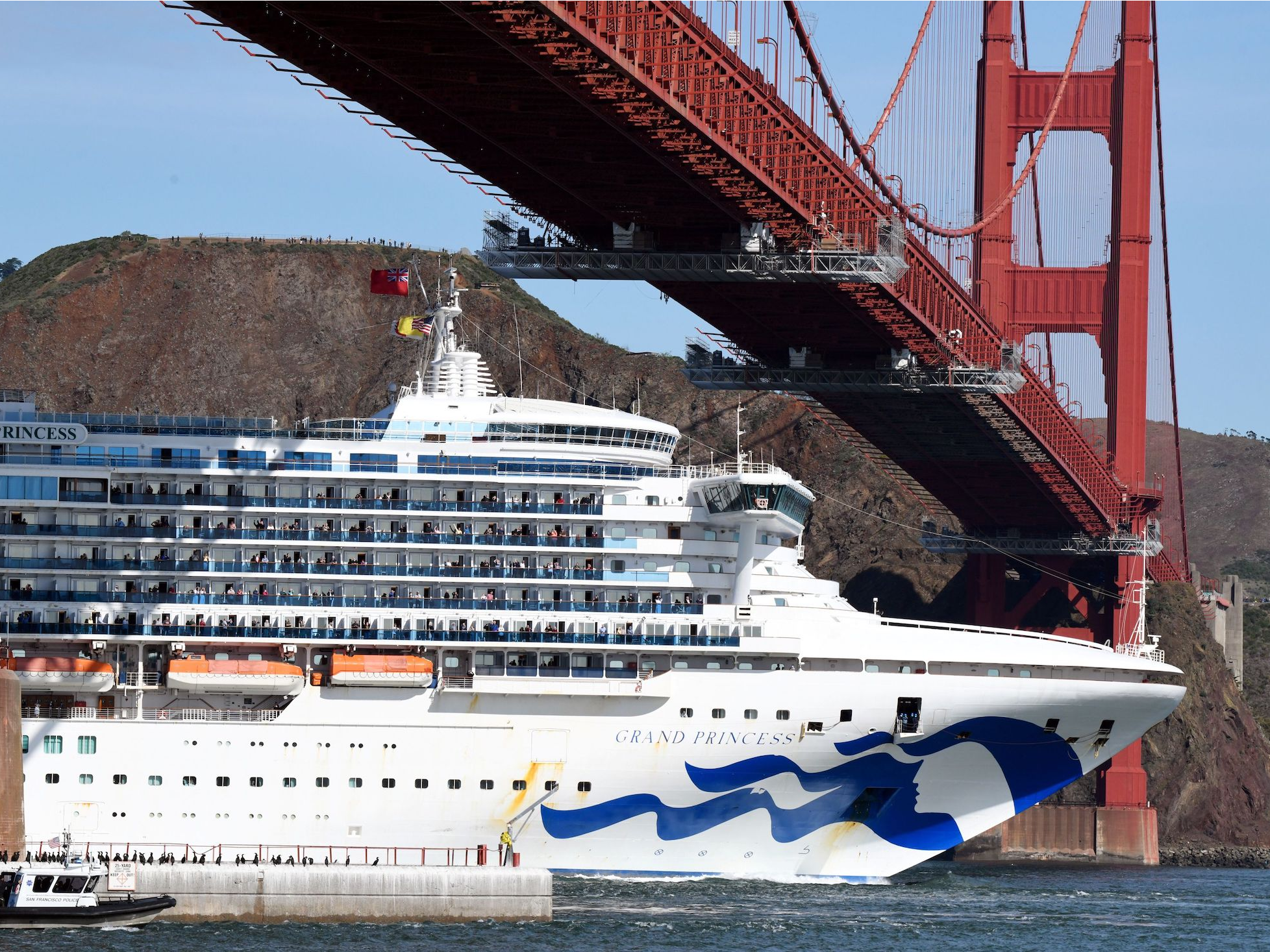 “I have received some very strong assurances that this operation will employ the best isolation practices known, that the operation will be conducted in a manner that minimizes the time for the Grand Princess to be at Oakland,” Oakland Mayor Libby Schaaf said in a press briefing on Sunday. “No one will be quarantined in Oakland or released to our community.”

The ship docked in the Port of Oakland around noon on Monday. The two passengers in need of medical care loaded onto ambulances. 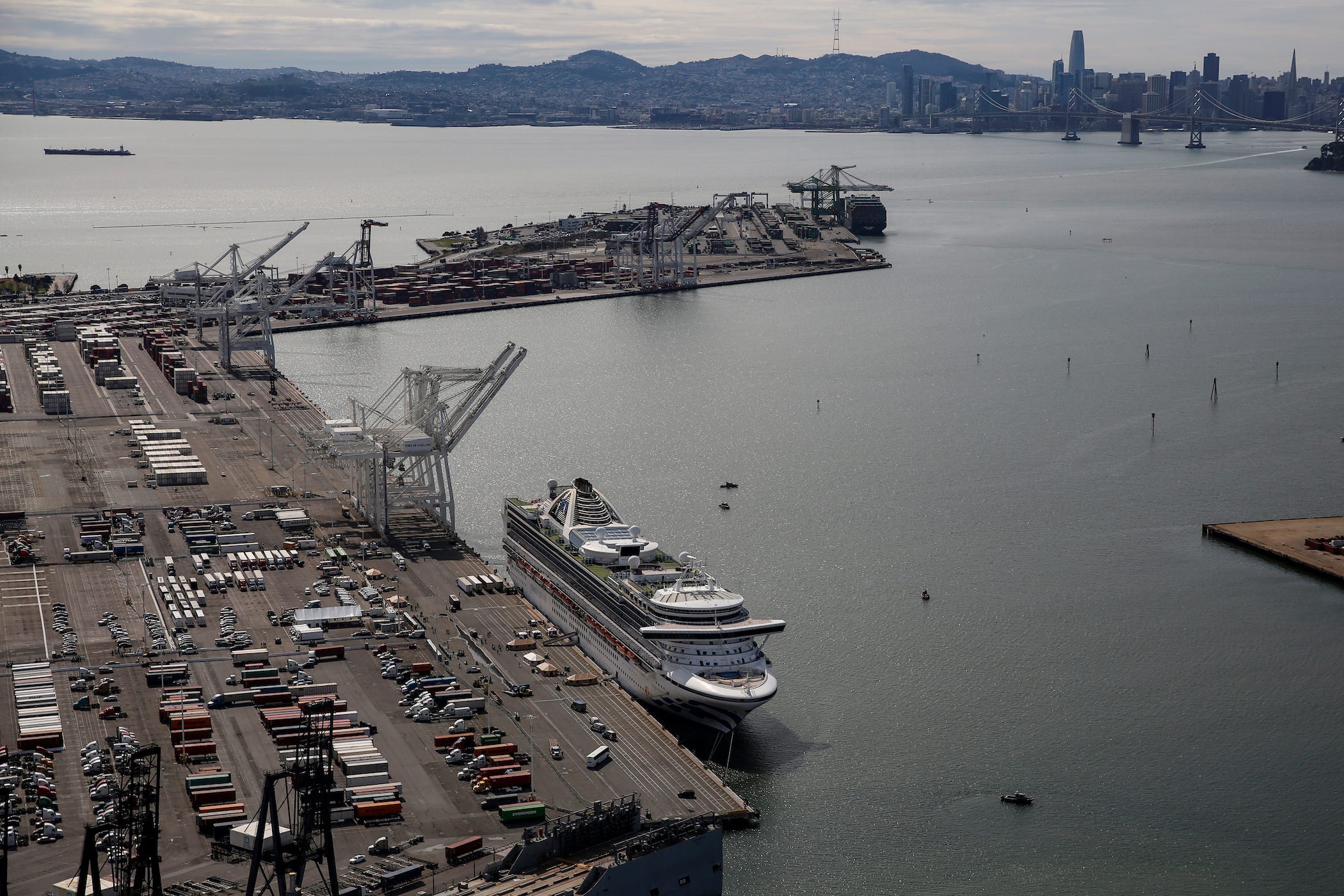 Stephen Lam/ReutersThe cruise ship Grand Princess docks at the Port of Oakland as authorities prepare for a passenger debarkation after 21 people on board have tested positive for the COVID-19 coronavirus in Oakland, California, March 9, 2020.

The passengers who tested positive went to local hospitals.

But getting everybody off the ship will likely take several days.

“Following the completion of the mission, the Port of Oakland site will be fully remediated and decontaminated by immediately removing temporary structures and pressure washing the entire site with a bleach solution to disinfect it,” the California Governor’s Office of Emergency Services said in a statement on Monday.

Other passengers boarded buses that would take them to charter planes or nearby military bases, where they will get tested and wait out a 14-day quarantine. 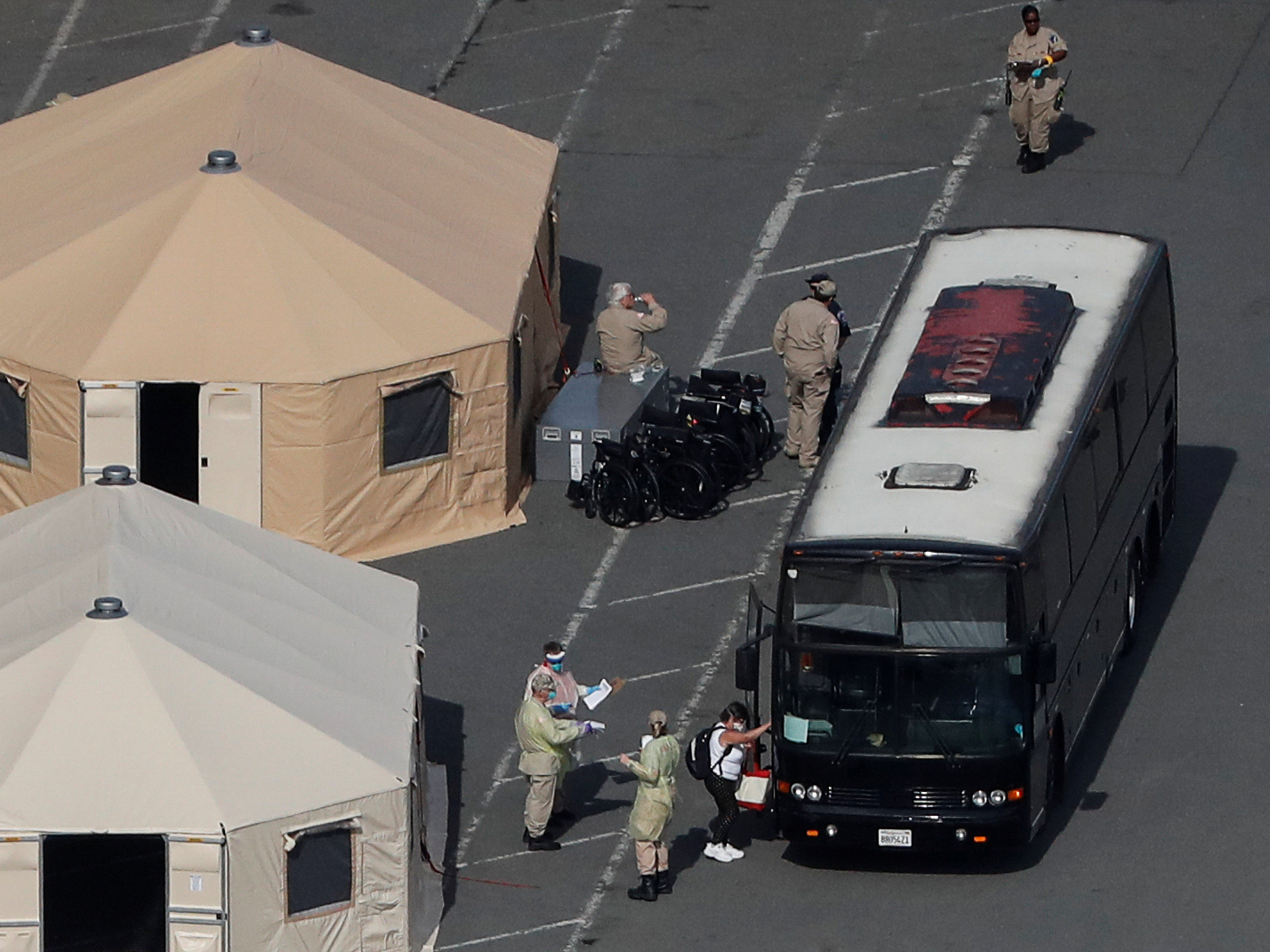 Stephen Lam/ReutersA person boards a bus at the Port of Oakland as authorities disembark the Grand Princess cruise ship after 21 people on board have tested positive for the COVID-19 coronavirus in Oakland, California, March 9, 2020.

Princess Cruises said in an email update that 407 people had left the ship as of Monday night.

Gov. Newsom said the 962 California residents on board would be prioritised, with some going to Travis Air Force Base and others to the Marine Corps Air Station for a 14-day quarantine.

He added that California would provide charter flights for people who are not US residents, though he did not specify how many flights that would entail or where they would go.

Residents of other US states will go to the Lackland Air Force Base in Texas and Dobbins Air Reserve Base in Georgia, he said.

“To avoid delays, testing will be conducted when guests arrive at their onward destination,” Princess Cruises said in a statement on Sunday.

Over 1,000 crew members will remain on the ship, including the 19 who tested positive for the virus. 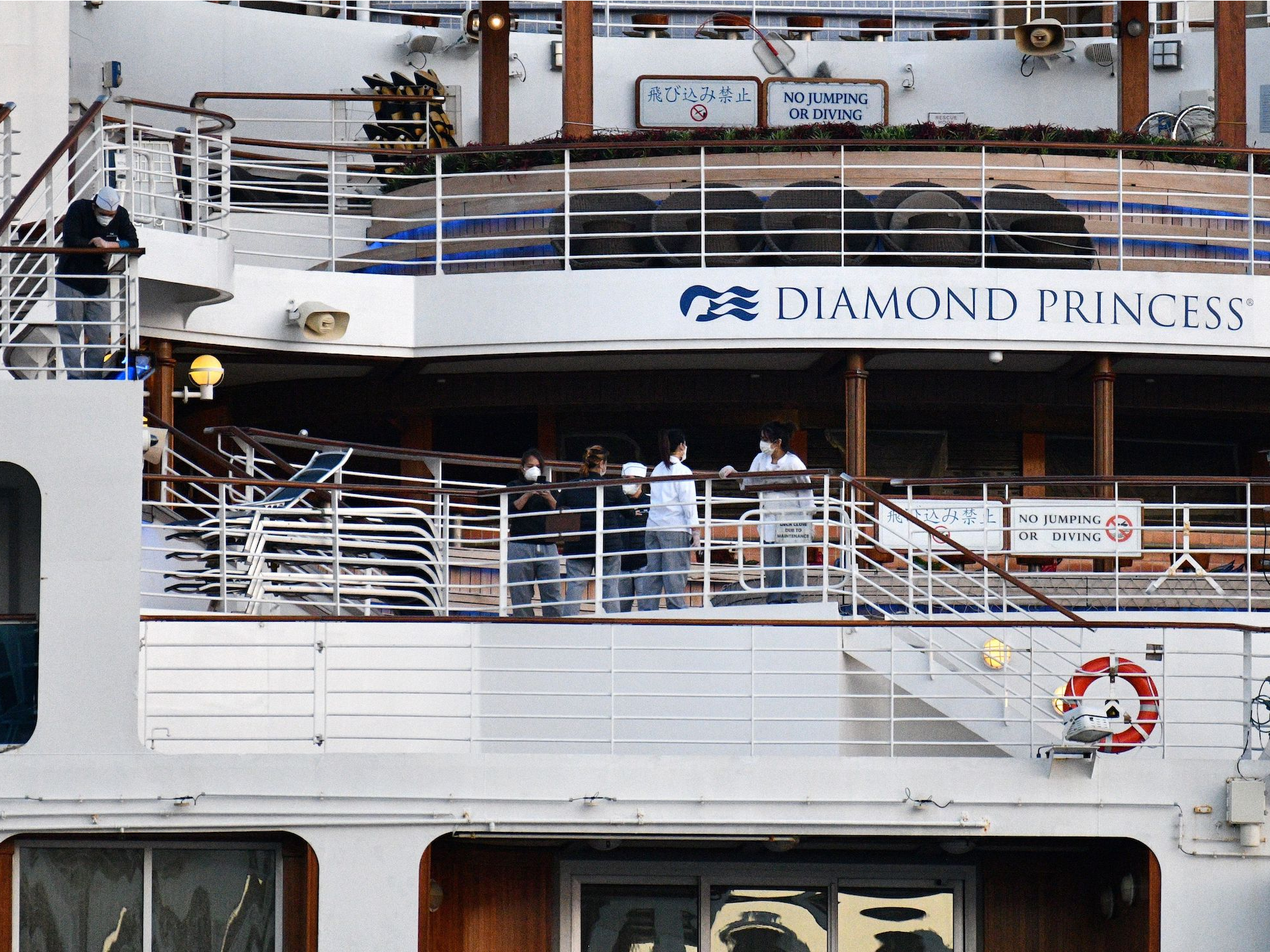 But some limited research has suggested that infected people who don’t have symptoms can pass the coronavirus to others. In one case, a woman in Wuhan, China, passed the virus to five family members without ever getting sick herself.

The ship is expected to leave the San Francisco Bay with its crew onboard. It is unclear where it will go next. 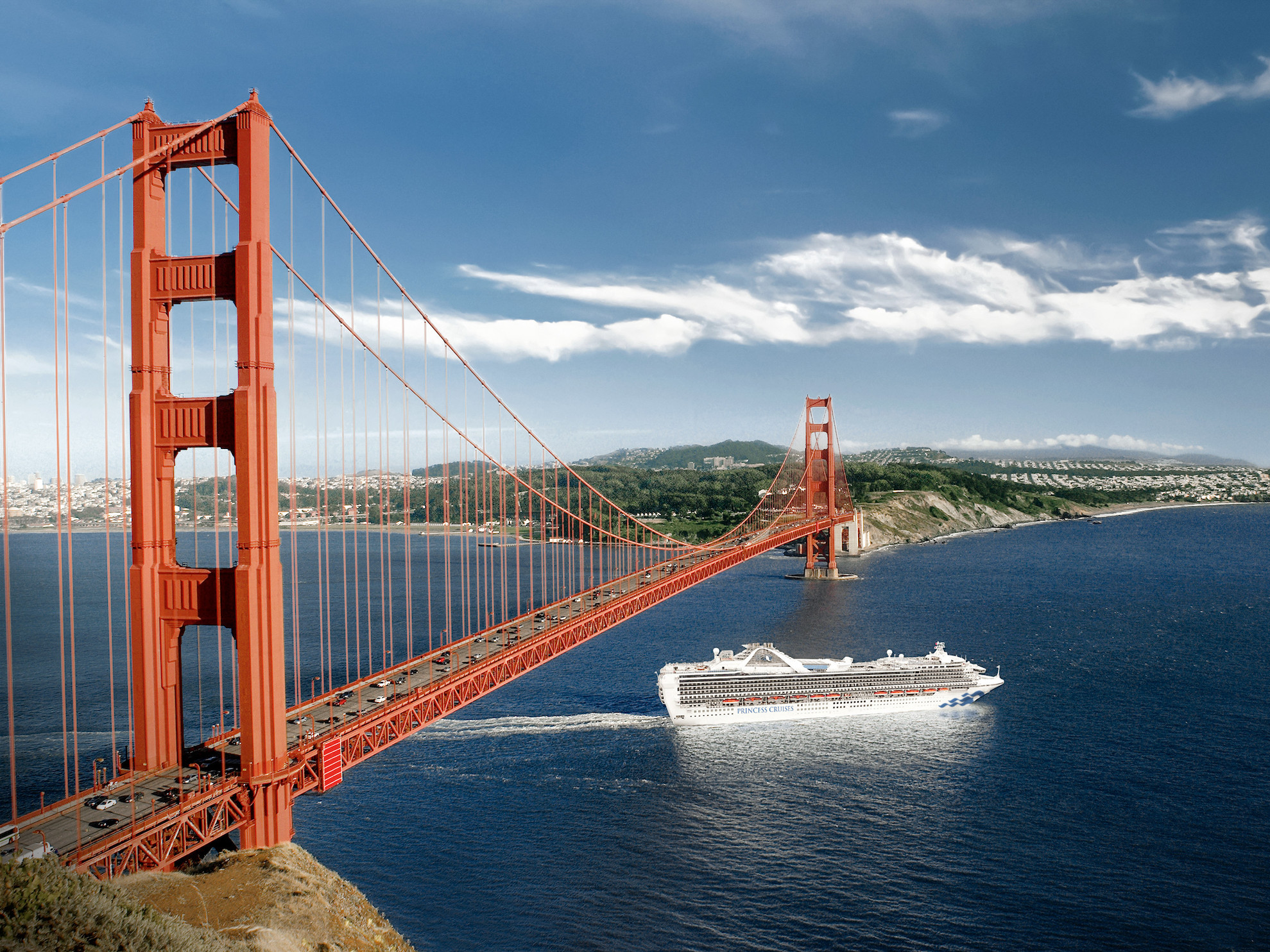 Crew members were especially at risk on the Diamond Princess in Japan, since they still had to share cabins, bring food to passengers, and eat together in a mess hall.

Dr. Norio Ohmagari, director of Japan’s Disease Control and Prevention Centre, told CNN that the quarantine “may not have been perfect” and that “scientifically speaking,” crew members should have been isolated just like passengers.

“I admit, our isolation policy was not perfect,” Shigeru Omi, another health adviser to the Japanese government, said in the conference. “No place is perfect except in a hospital.”