From deserted terminals to empty planes, this is what it's like to fly in the US during the coronavirus outbreak As the coronavirus continues to spread worldwide, it’s beginning to take its toll on one of the nation’s busiest airports.

I flew out of New York’s biggest airport, John F. Kennedy International, last Thursday night. I had booked the trip weeks ago, before coronavirus began spreading more rapidly. As the trip drew near and the outbreak escalated in the US, I debated whether I should cancel my travel. But when my office closed down and I noticed how the outbreak was starting to affect aspects of life in New York City, like subway travel or stores being able to stock supplies, my fiancé and I decided to risk travelling in order to stay long-term in a less-populated city.

Since then, President Donald Trump has implemented travel restrictions to Europe, leading airlines like Delta and American to scramble. United Airlines has cut flights by 50%, while other airlines have temporarily suspended operations altogether.

This is what it was like to travel by air amid the outbreak.

I arrived at JFK on Thursday night around 8:15 p.m. I was flying on Delta Airlines and departing out of Terminal 4, which is the biggest terminal at JFK – it typically sees 58,900 passengers pass through each day. Domestic flights leave from T4, but it’s also JFK’s international terminal.

I fly home to Buffalo about once a month, and I almost always take the latest flight out of New York on Thursday, either on JetBlue or Delta. The check-in desks and self-serve kiosks are usually all occupied, but on Thursday, they were completely empty. 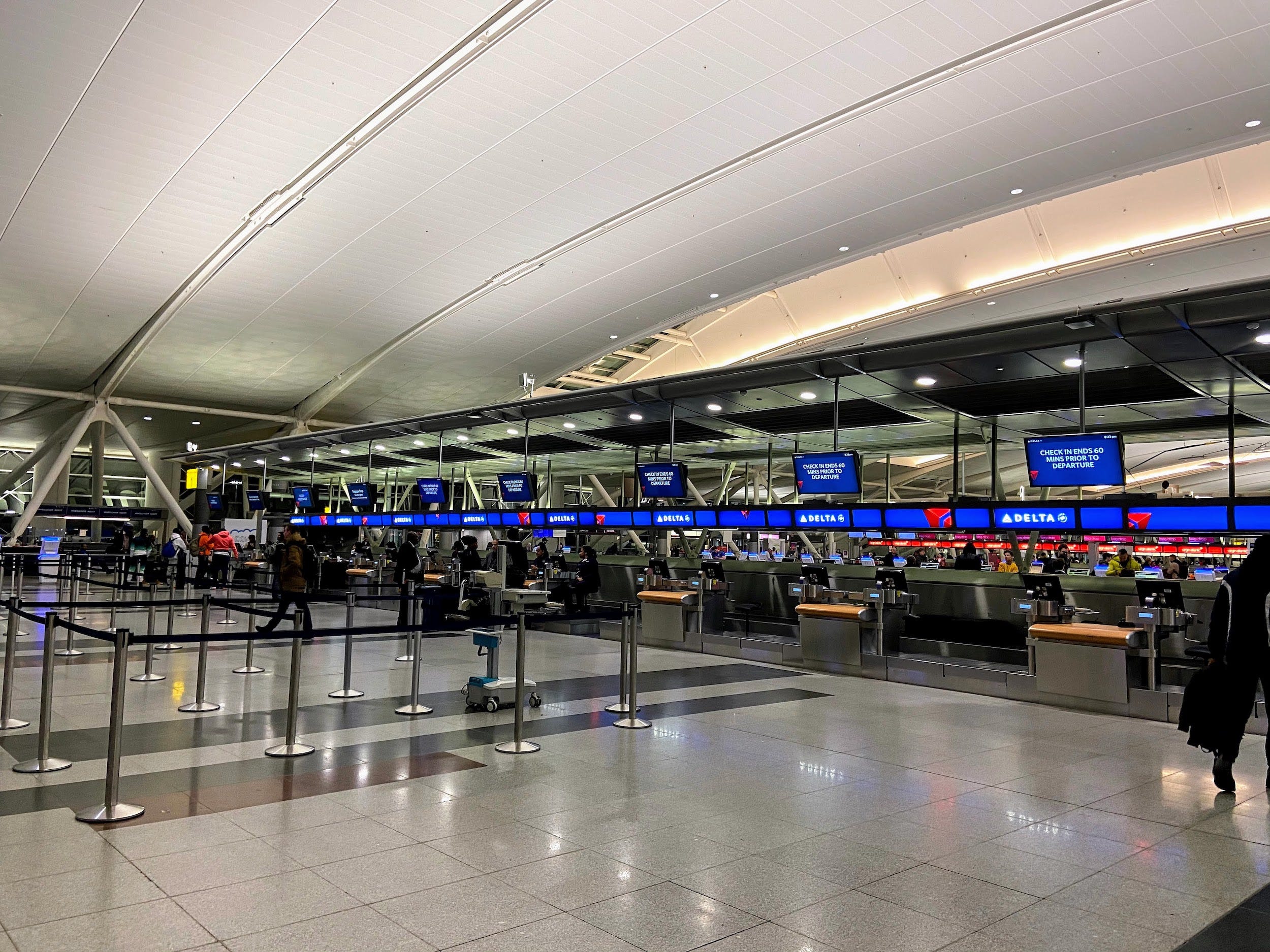 I had TSA PreCheck for my flight, but PreCheck was completely closed. By this point in the process, I’d seen just one hand sanitizing station. 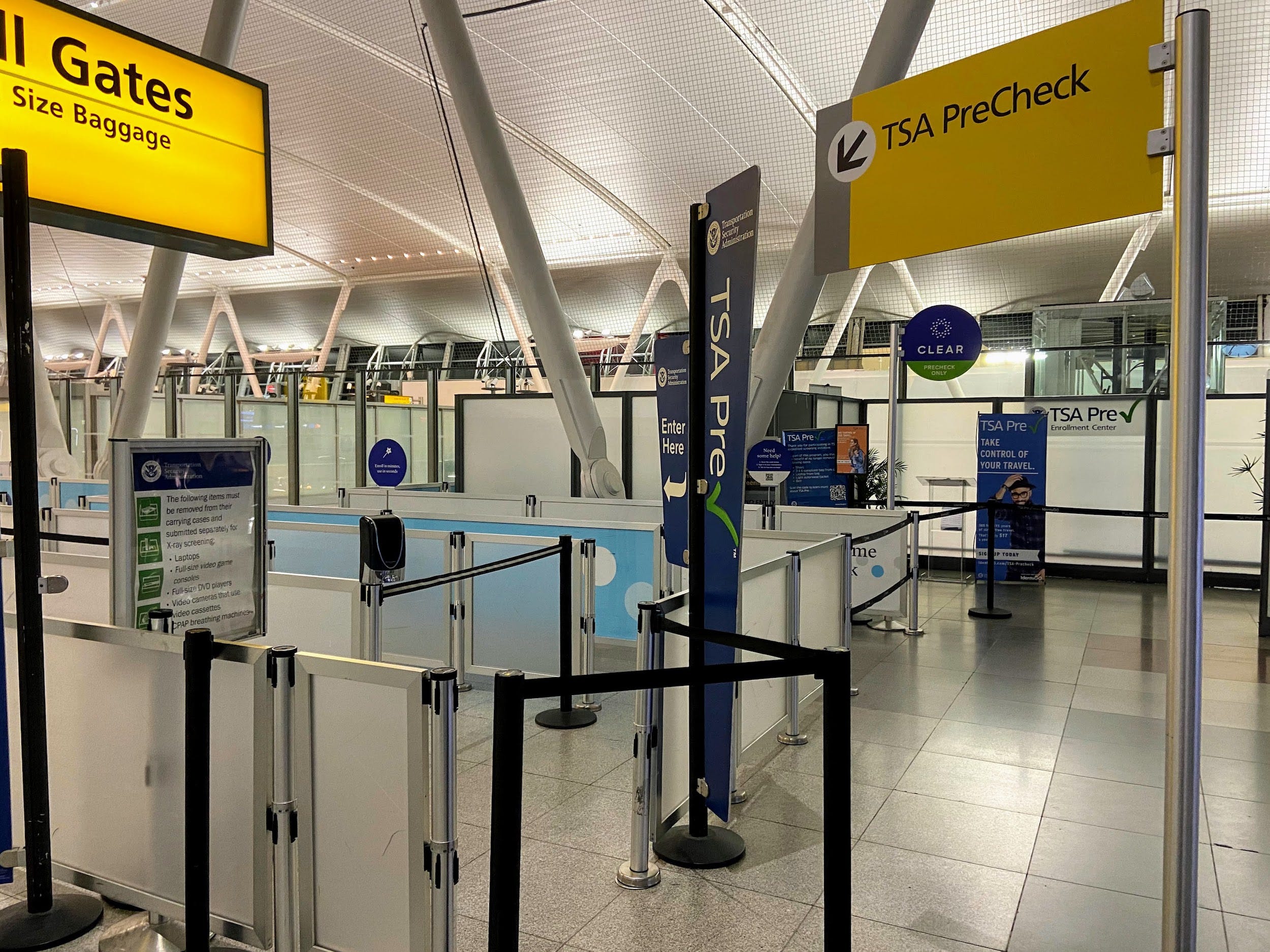 Terminal 4 has long, horizontally oriented security lines, and it usually takes me about 10 to 15 minutes to get to the front of the line. This time, the lines had only a handful of people in them, mostly international travellers. Despite the short lines, however, it took just as long to get through security. 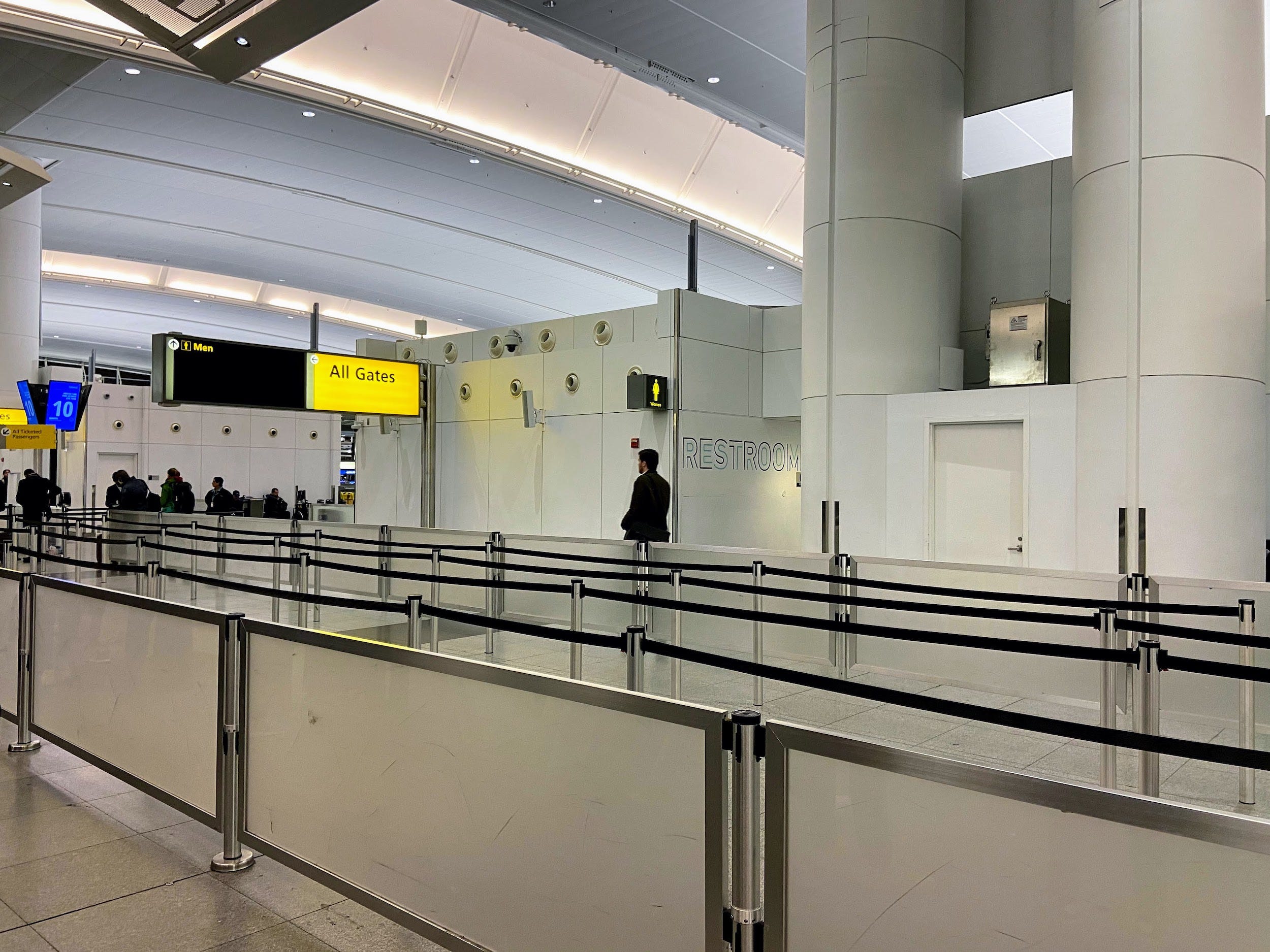 Most of the security desks were closed. When it was my turn to hand over my boarding pass and ID, I was surprised that the TSA agent at the desk didn’t scan my boarding pass — it turned out this is one of many changes being implemented to make the screening process safer. 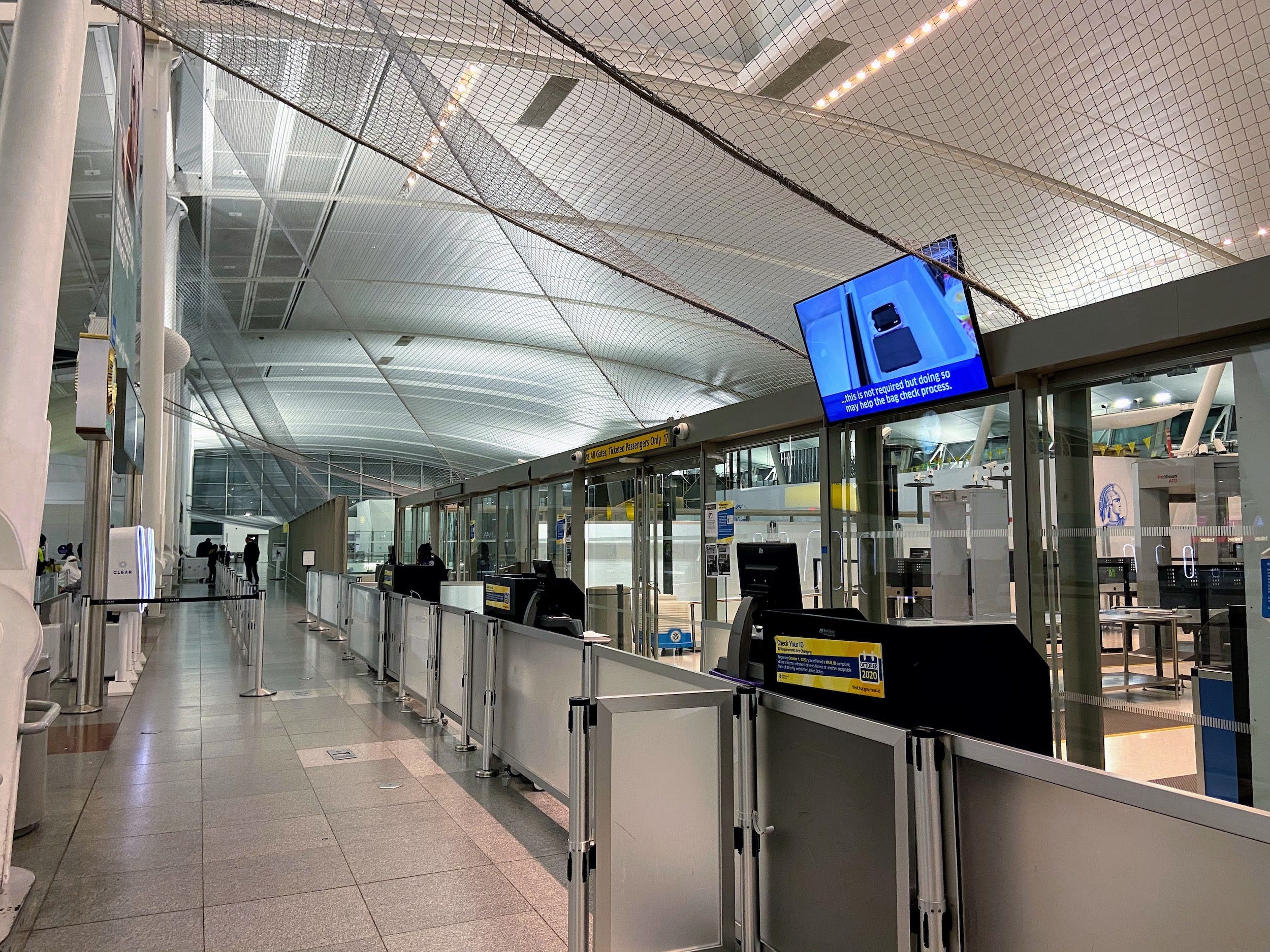 I noticed many people taking precautions — and others unnecessarily exposing themselves to germs. 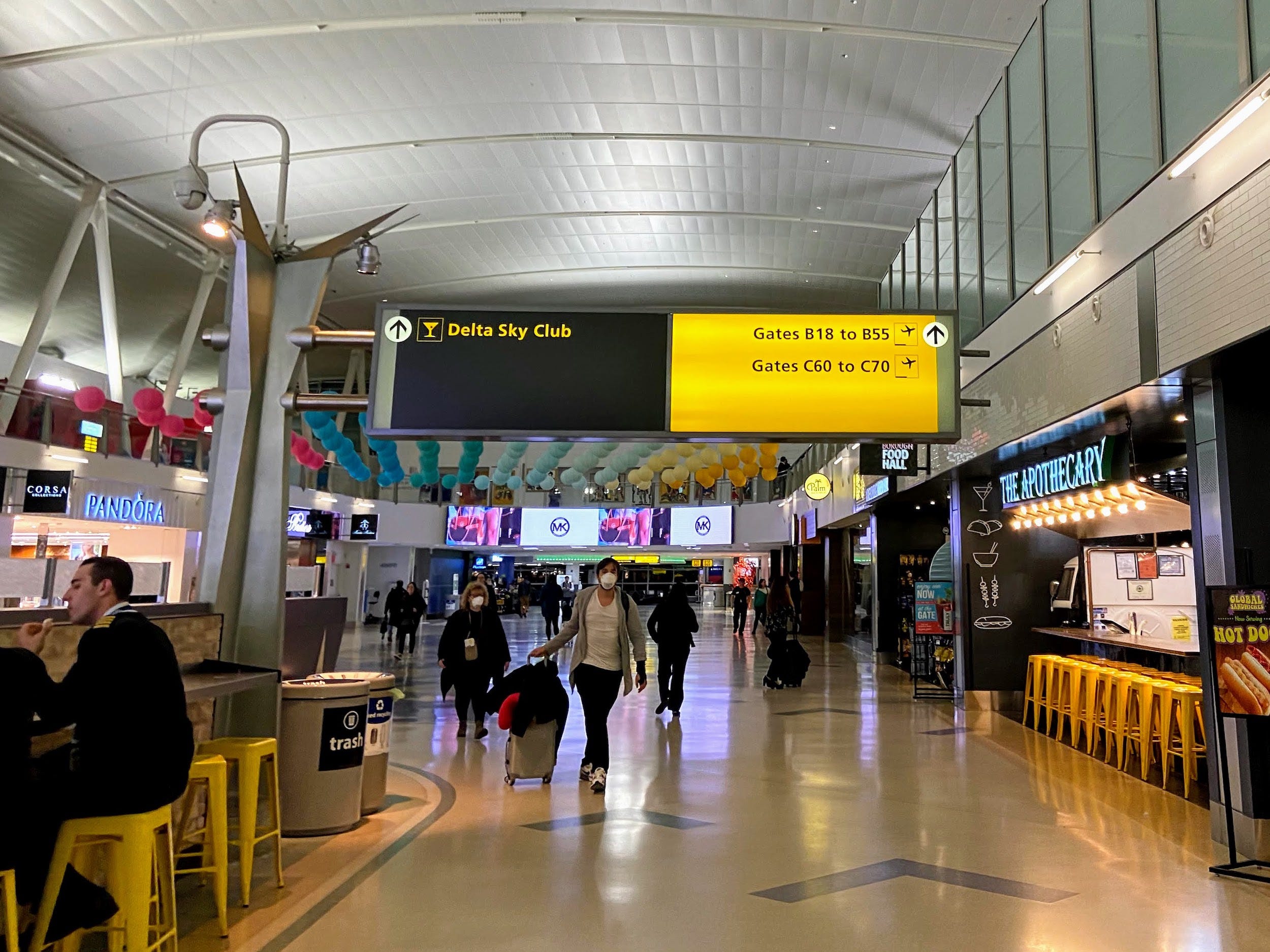 Every worker at JFK’s security checkpoint was wearing gloves, and most were wearing masks (which don’t protect healthy people from the virus).

Many passengers were wearing masks too: I’d estimate that 50% of the people I saw at JFK had masks on. But I noticed multiple people exposing themselves to germs in other ways.

One woman wearing a mask was asked to take her passport out of its case, so she pulled her mask down to put the case in her mouth while she handed the passport to the TSA agent.

I also saw a family of three all wearing masks pull them off in order to share what was left of a water bottle before putting their bags on the conveyor belt.

In general, tensions seemed high at the airport. One TSA agent yelled at someone in line to cover their mouth when they coughed, while another passenger got immediately angry with an agent who asked her to take off her shoes.

Terminal 4 is massive — it covers about 2 million square feet — and it was a long walk to my gate. It wasn’t until I walked for about 10 minutes that I saw a hand sanitizing station. 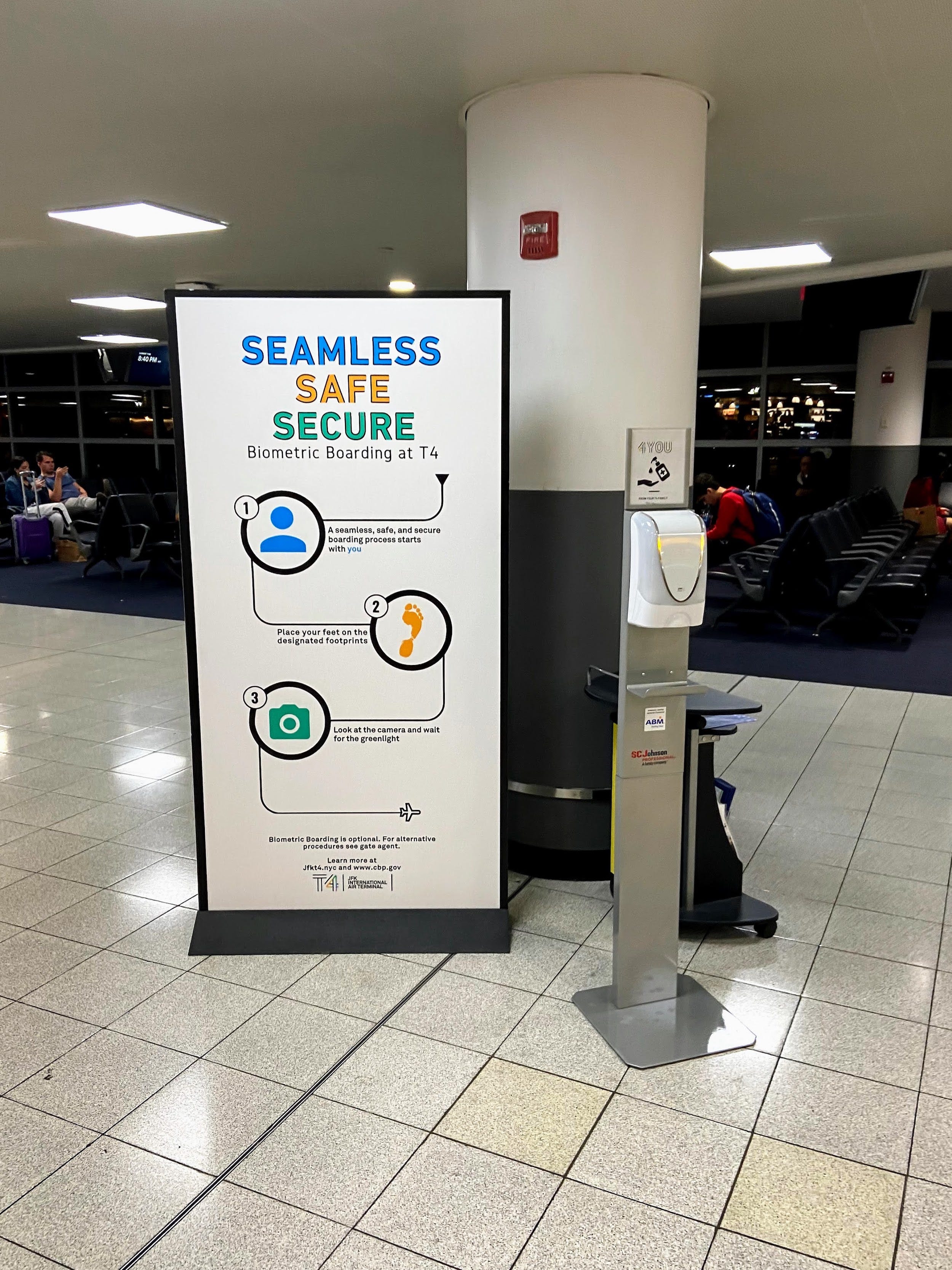 Thankfully, I’d brought my own travel-size bottle that my fiancé and I had been using every time we touched something at the airport. But as hand sanitizer has become harder to find in stores, I would have appreciated more available dispensers throughout the airport. 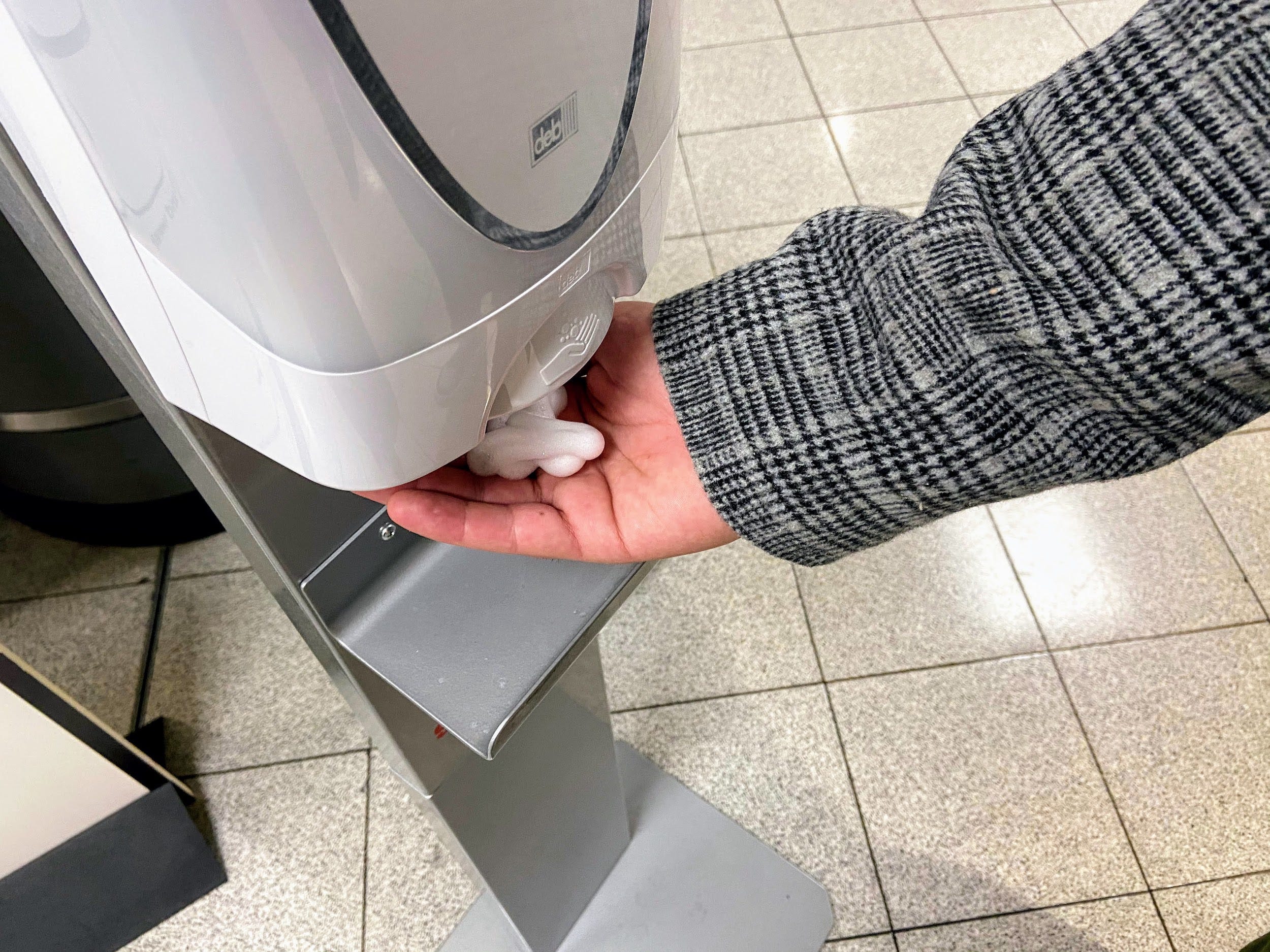 I noticed that stores throughout the airport were almost entirely empty. Places like massage kiosks and spas were totally deserted. 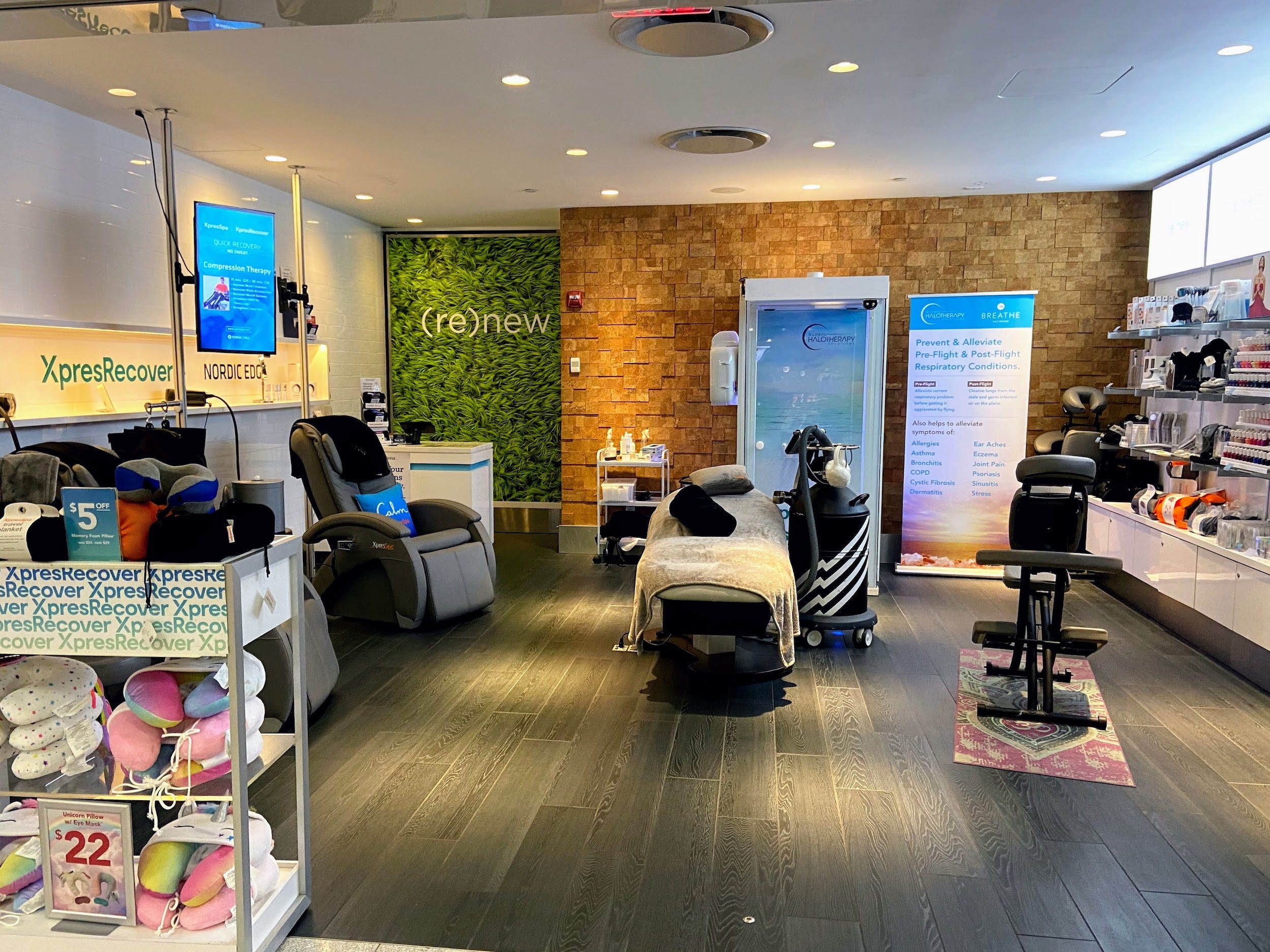 Even Shake Shack, which has a line day or night, was uncharacteristically quiet. 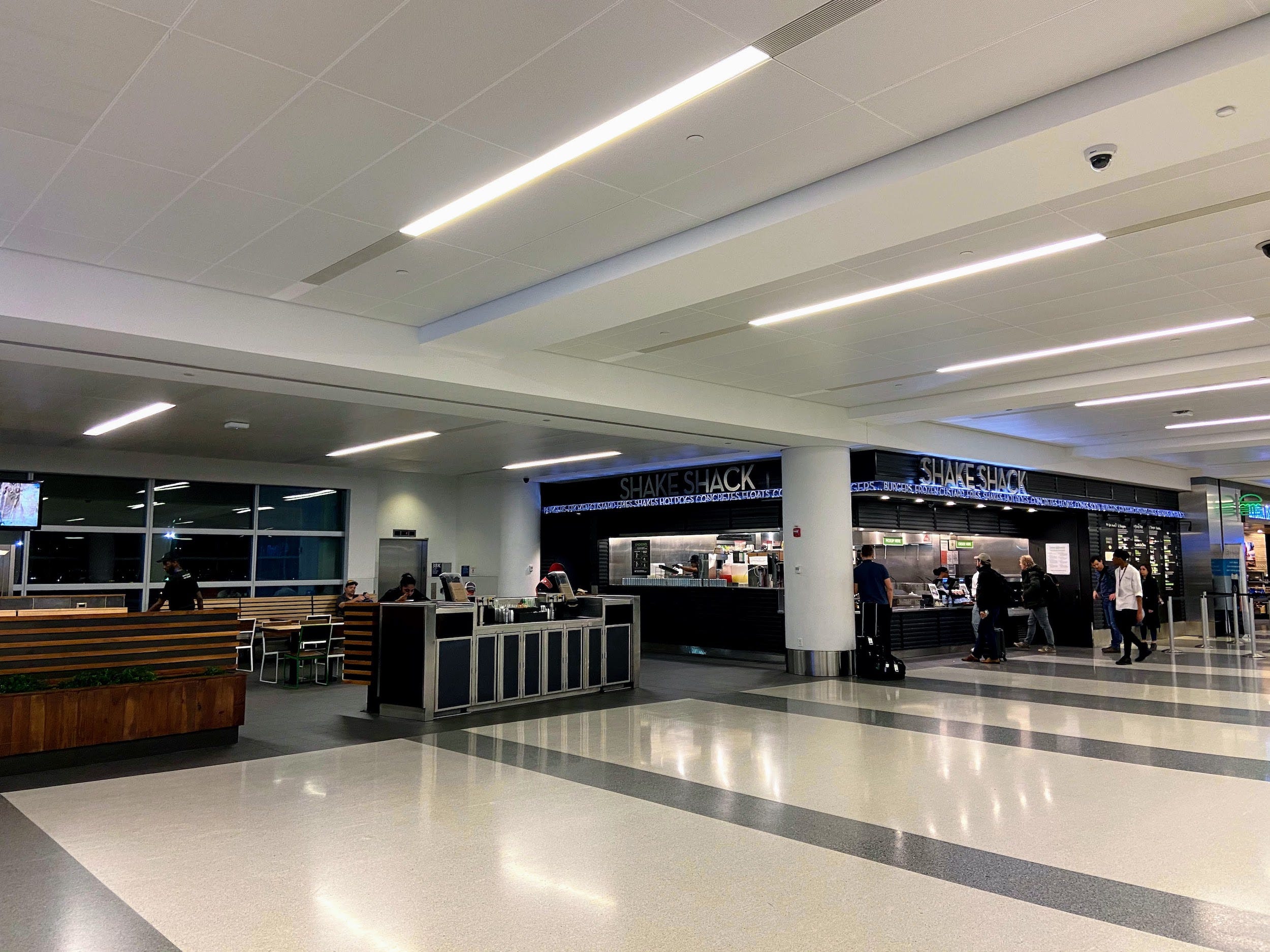 I’ve taken this flight probably around 30 times over the years, and the terminal is usually bustling with multiple flights boarding at once. This time, it was empty, with very few boarding announcements coming over the loudspeaker. 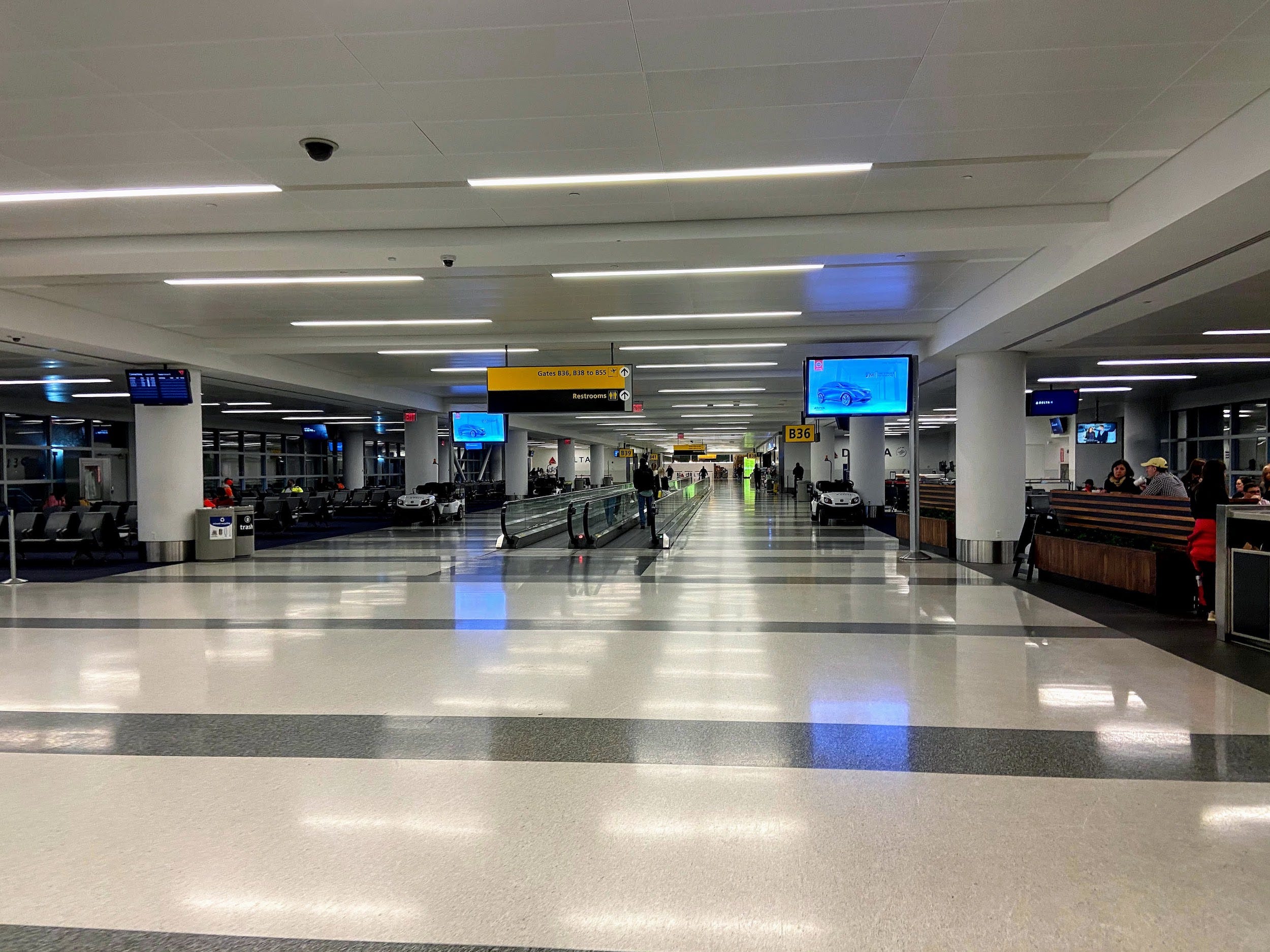 When we got to our gate, there were only a few people waiting for our flight, which is typically packed. Most times when I take this flight, it’s sold out, and many passengers are required to gate-check their bags. This time, the entire boarding process took about five minutes. 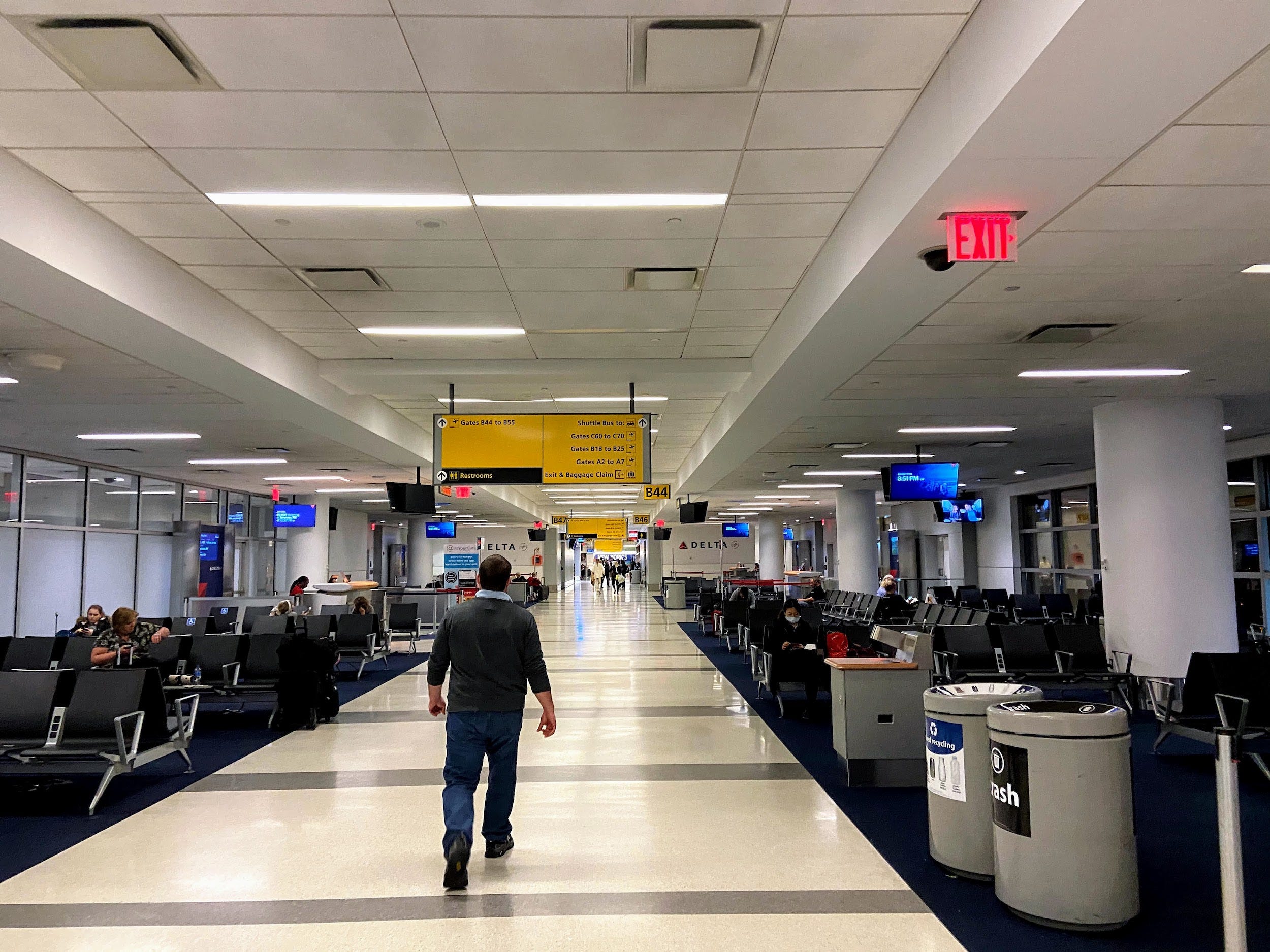 I was among the last to board and the plane was mostly empty — I’d estimate only about 25 passengers were on the flight. I wiped down my entire seat, as well as my fiancé’s, with sanitizing wipes, and I noticed other passengers doing the same. 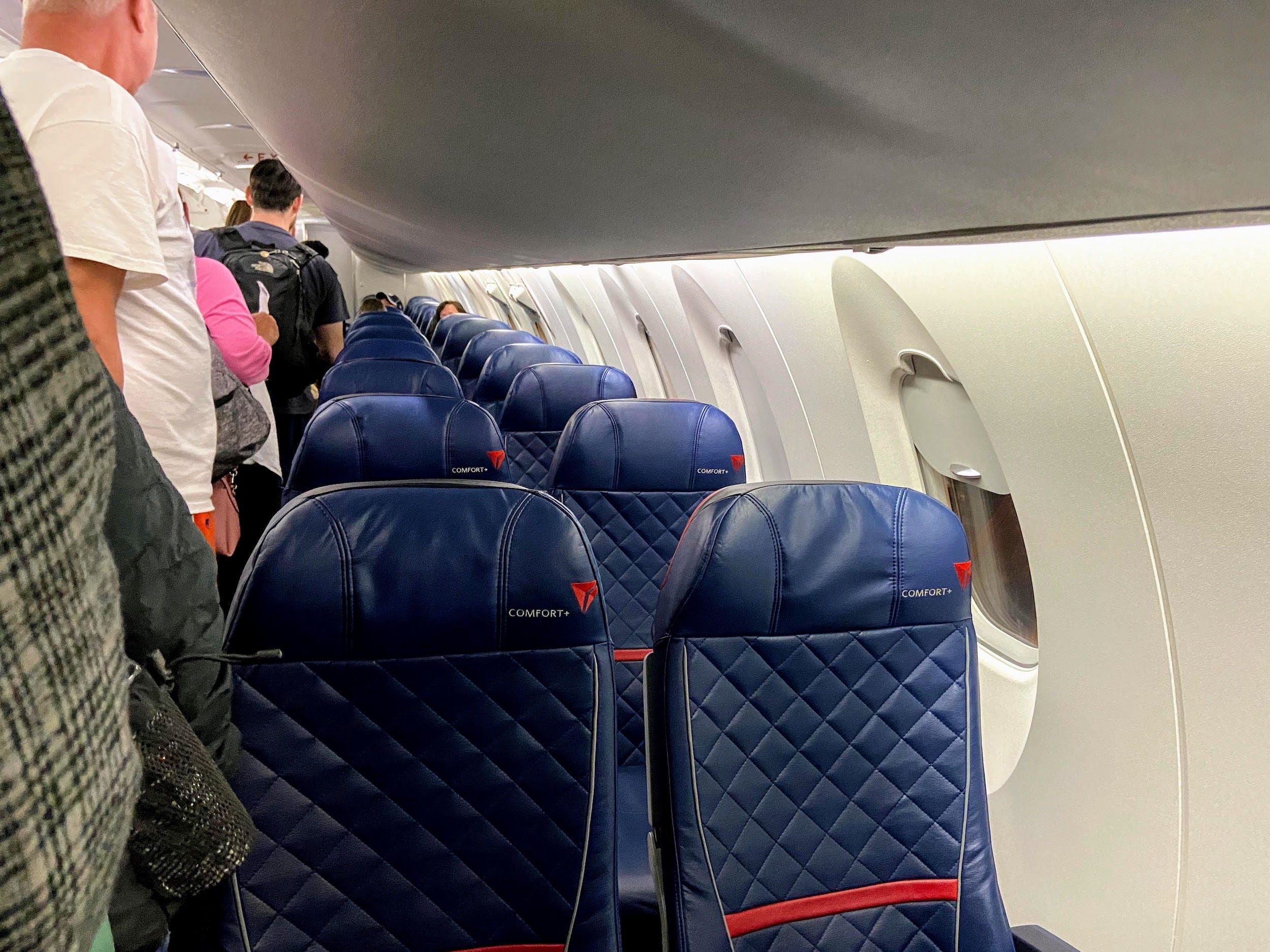 Once the flight got underway, things proceeded normally. The flight arrived in Buffalo slightly early and things appeared to be business as usual at Buffalo Niagara International Airport. While I noticed a few more hand-sanitizing stations, the rest of the airport looked like it usually does at 11:30 p.m. – quiet and mostly empty.

Since I arrived on Thursday evening, Western New York has gotten its first cases of coronavirus, and the total number of cases is already at seven. While some of those cases are people who travelled from the New York City area, I haven’t had any symptoms. Still, like many people, I’m taking every precaution I can.