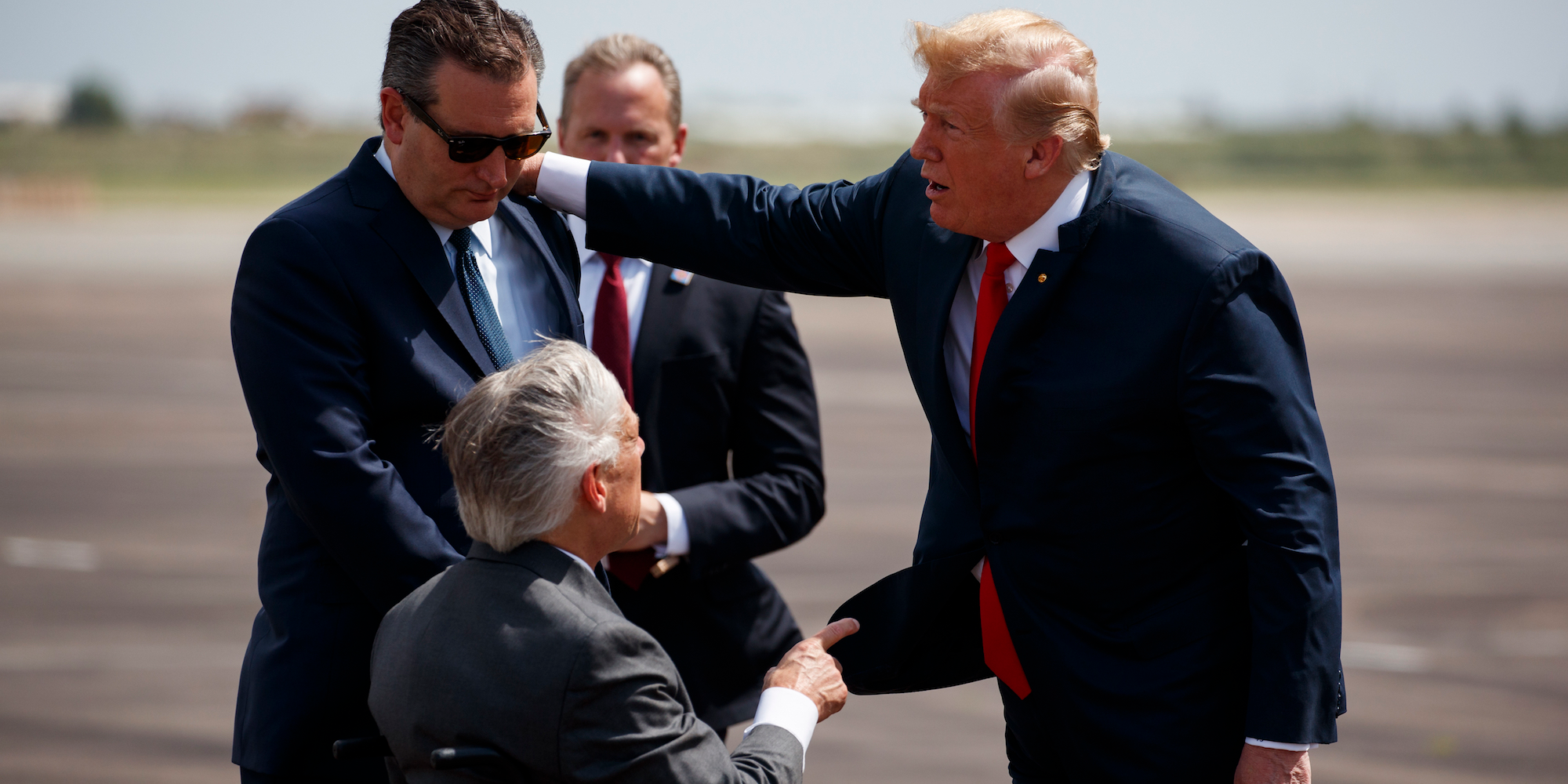 Associated Press/Evan VucciPresident Donald Trump with Sen. Ted Cruz and Gov. Greg Abbott of Texas after arriving at Ellington Field Joint Reserve Base in Houston in 2018.

Mayors across the US are on the front lines of fighting the novel coronavirus, but several Republican governors are being accused of slow-walking or even undermining local officials’ efforts.

By Monday, at least 29 states had put statewide “stay at home” orders in place, meaning more than two-thirds of US residents are ordered to stay home except for essential activities, including medical appointments and grocery shopping. But major states like Texas and Florida have so far refused.

Mayor Sylvester Turner of Houston has refrained from publicly criticising Gov. Greg Abbott but insisted in an interview with Insider that the expert advice he’d gotten demanded a robust, aggressive response. Last Tuesday, Turner and the county judge ordered all Houstonians to stay inside.

The Democratic mayor said the medical and scientific evidence and advice presented to him before he decided to shut his city down were “so overwhelming that you just couldn’t ignore that.”

“I don’t know what information the governor may have received or been given, but based on the information and the facts and the strong recommendation being made by the medical community in a unanimous way, to not impose a stay-at-home order I think would have been going against the facts and the advice and the science,” he told Insider in a phone interview.

Turner argued that if the state didn’t act cohesively, it would hurt the efforts he and other Texas mayors had made to slow the virus’ spread in their cities.

“We recognise that whatever you do in one jurisdiction, if it’s not done in other jurisdictions, then it weakens the overall impact,” he said. “We have to work together.”

Turner stressed that if he had waited even a day longer, it may have been too late to contain the spread in his city.

“What I’m being told is the best time to implement these aggressive stay-home, work-safe orders is when the numbers are relatively lower,” he said.

The state’s lieutenant governor, Dan Patrick, a conservative Republican, declared last week that “lots of grandparents” were willing to sacrifice themselves to COVID-19 if it meant the economy could get back up and running more quickly.

“My message: Let’s get back to work, let’s get back to living, let’s be smart about it, and those of us who are 70-plus, we’ll take care of ourselves,” Patrick told the Fox News host Tucker Carlson. “I don’t want the whole country to be sacrificed.” Ismael Francisco/Cubadebate/APMayor Sylvester Turner of Houston during a business forum in Havana in 2016.

“It’s easy for someone of power and privilege to say something so callous,” Mayor Ron Nirenberg of San Antonio said.

“That’s a false choice and will not help to move us through this crisis in such a way that when we come out of it we are stronger and more resilient,” he said. “You can’t just look at what steps you need to take while you’re in this crisis, you also have to make sure that the steps and the things that you say today will not work against you when you come out of it and you’ll have a more divided society.”

There are 232 confirmed coronavirus cases in Houston, but because of a severe shortage of tests, the mayor said he’s operating under the assumption that hundreds, if not thousands, of Houstonians had been infected.

“Frankly, I kind of take that number in my own mind and multiply it by 10,” Turner said.

Gov. Doug Ducey of Arizona for weeks rejected calls from his local officials to issue a statewide shelter-in-place order and undermined those officials’ ability to make their own decisions. On Monday afternoon, the Republican was finally forced to issue a stay-at-home order after nine Arizona mayors signed a letter demanding he do so. It takes effect Tuesday at 5 p.m. local time.

Major Arizona cities including Phoenix and Flagstaff were the first to take action to staunch the spread of the virus by ordering bars to close while limiting restaurants to takeout in mid-March. The move pressured Ducey to do the same a few days later in all counties with confirmed infections.

But Ducey also issued a series of executive orders that gave his administration unilateral authority to respond to the crisis, superseding the authority of mayors and other local officials. And he released a list of all of the kinds of businesses, including beauty salons and golf courses, that he deemed “essential” during the pandemic.

“No county, city or town may make or issue any order, rule or regulation that restricts or prohibits any person from performing any function designated by either the Governor, the director of the Arizona Department of Health Services, or the Division of Emergency Management as an essential function during the COVID-19 public health emergency,” one order said.

Mayor Kate Gallego of Phoenix, who signed the letter demanding a statewide stay-at-home order, told Insider that Ducey had dramatically undermined her ability to respond to the pandemic as it hit her community. She added that she’s attempting to send “the strongest possible message” that her constituents should stay home.

“I have tried to strongly urge the governor to put in place a better framework for a ‘safer at home’ ordinance,” Gallego told Insider in an interview last Friday. “To me, this is a very serious global pandemic. This is something we have never seen before as a country. This is the first national disaster where we expect people to die in all 50 states. I worry that what looks like an early precaution now will end up looking like it was insufficient in two to three weeks.” 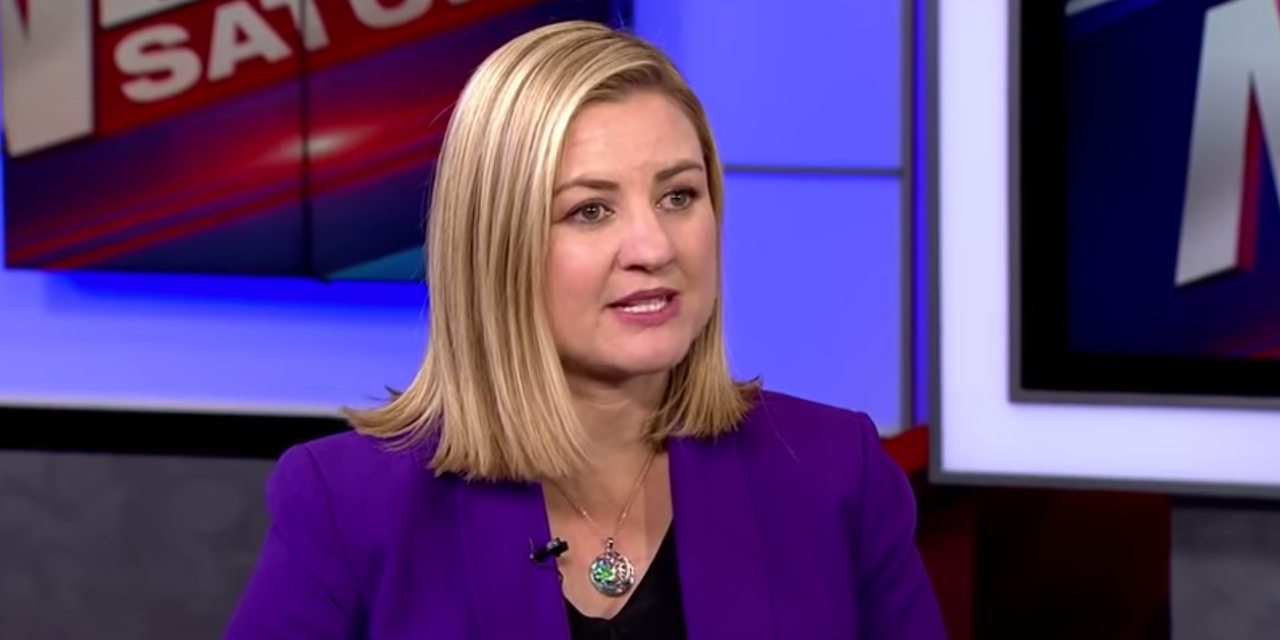 Gallego added that she’s “concerned about the message it sends when we say that golfing and beauty services are essential.”

“I disagree that in a time where we’re talking about saving lives a manicure is essential,” she said. “My nails look terrible right now, but I’m doing just fine with my terrible-looking nails.”

The mayor said communication between her office and the governor’s was limited to a “junior policy aide” acting as a liaison.

“Right now I’m very much focused on getting more power back,” she said. “I do believe the governor is not taking this sufficiently seriously.”

The state is also far behind in testing. Arizona is last in the nation when it comes to the number of coronavirus tests it’s conducted, despite being the 14th-most-populous state with a large percentage of elderly residents, according to a New York Times analysis on Thursday.

Other Arizona lawmakers also condemned Ducey’s approach and pushed for bolder action. Rep. Kyrsten Sinema, a moderate Democrat, repeatedly sounded the alarm and called on the governor to shut the state down before his Monday order.

“In other states w/ similar rates of growth, Governors have implemented shelter-in-place to rapidly slow the spread of the virus & save lives. @AZDHS new policy is not to test ill Arizonans,” she tweeted last Friday. “A massive shortage of hospital beds is expected. How much longer do we wait for action?”

At the same time, several other GOP governors, including Mike DeWine of Ohio and Larry Hogan of Maryland, have acted quickly to crack down on the virus’ spread.

Hogan issued a stay-at-home order on Monday. Last week, on March 23, he ordered the closing of nonessential businesses.

In Ohio, DeWine issued a stay-at-home directive on March 23.

Warnings from a COVID-19 patient and Republican mayor

In Florida, however, Gov. Ron DeSantis has rejected calls to issue a statewide stay-at-home order, citing a lack of widespread infection across the state.

Mayor Francis Suarez of Miami, who was the first person in Miami-Dade County to test positive for the novel coronavirus, told Insider last Thursday that DeSantis, a fellow Republican, should implement a statewide lockdown as soon as possible.

Suarez, 42, said it’s “hard to second-guess” DeSantis’ reluctance to follow other states in instituting a shelter-in-place order, “but I personally would.”

The mayor shut all nonessential businesses in Miami, the hardest-hit city in the state, on March 17 and issued a “stay at home” order and a curfew last week.

“Every decision that I’ve made that has been thought to be premature or overly aggressive, in a week or two weeks or three weeks has looked prophetic,” Suarez told Insider by phone from his Miami home, where he was finishing a quarantine of more than two weeks.

On Monday, DeSantis took a step in that direction, ordering that South Florida stay home until April 15.