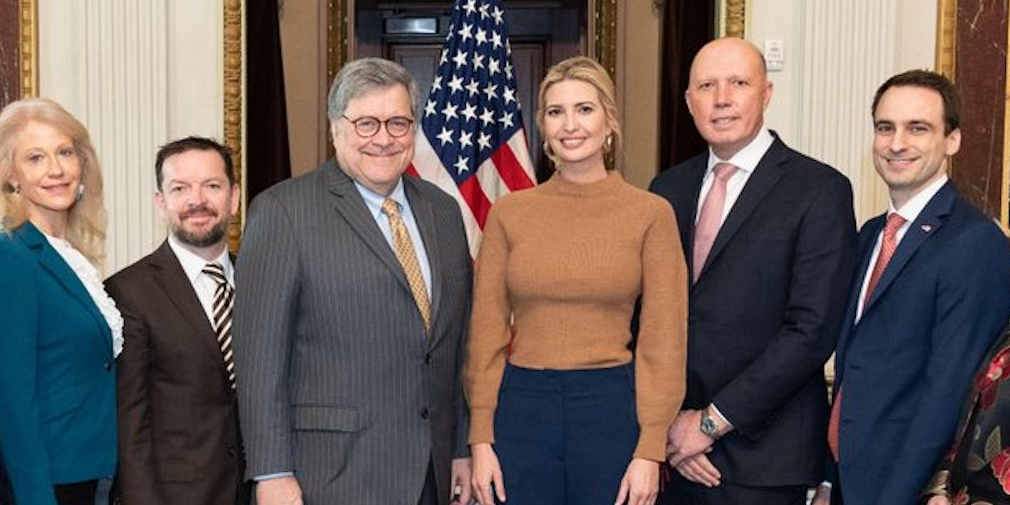 TwitterIvanka Trump is pictured with Australian Home Affairs Minister Peter Dutton (next to her in a black suit and pink tie) in this picture tweeted by the Australian embassy in the US.

Peter Dutton, the Australian home affairs minister who announced Friday he had tested positive for the coronavirus, was pictured standing next to Ivanka Trump on an official visit to the US last week.

In a statement Friday Dutton, who sits on the country’s national security council, said that he had woken up with a “temperature and sore throat.” He said that he had contacted his local health department and checked himself into hospital, where he tested positive for COVID-19, the disease it causes.

Dutton had recently travelled to the US on an official visit to discuss global efforts to tackle child exploitation.

In a March 5 photograph from the visit, tweeted by the Australian embassy, Dutton is pictured to the left of Ivanka Trump, President Donald Trump’s daughter, who is an adviser in her father’s administration.

The Five Eyes is a name for the intelligence-sharing alliance of the UK, US, Canada Australia, and New Zealand.

A March 5 Justice Department news release said that Chad Wolf, Acting Secretary for the Department of Homeland Security also attended the event. Business Insider has contacted the department for comment.

Dutton’s positive test returned a full week after the Justice Department event, and Dutton said he only experienced symptoms the same day as the test.

Medical experts say the coronavirus is most contagious after symptoms occur, but it can also spread beforehand.

According to the release, New Zealand Minister of Internal Affairs and Minister for Children Tracey Martin, and Canada’s Minister of Public Safety and Emergency Preparedness Bill Blair were also there.

“The White House is aware that Mr. Dutton tested positive for COVID-19. He was asymptomatic during the interaction,” he wrote. “Exposures from the case were assessed and the White House Medical Unit confirmed, in accordance with CDC guidance, that Ivanka is exhibiting no symptoms and does not need to self-quarantine. She worked from home today out of an abundance of caution until guidance was given.”

The justice department did not immediately respond to a request for comment on Barr’s exposure to infection.

In recent days celebrities, sports stars and senior politicians across the world have tested positive for the coronavirus.

On Thursday, Canadian prime minister Justin Trudeau said he was self-isolating after his wife, Sophie Grégoire Trudeau, had tested positive for the coronavirus.

The White House on Thursday said that President Trump was not being tested, despite a senior Brazilian official who attended a Florida event with Trump over the weekend testing positive for the illness.

At the Conservative Political Action Conference a fortnight ago Trump shook hands with Matt Schlapp, the chairman of the American Conservative Union, who had come into contact with an attendee who tested positive.