I'm incarcerated at San Quentin prison for 55 years to life. I didn't think things could get worse until COVID-19. 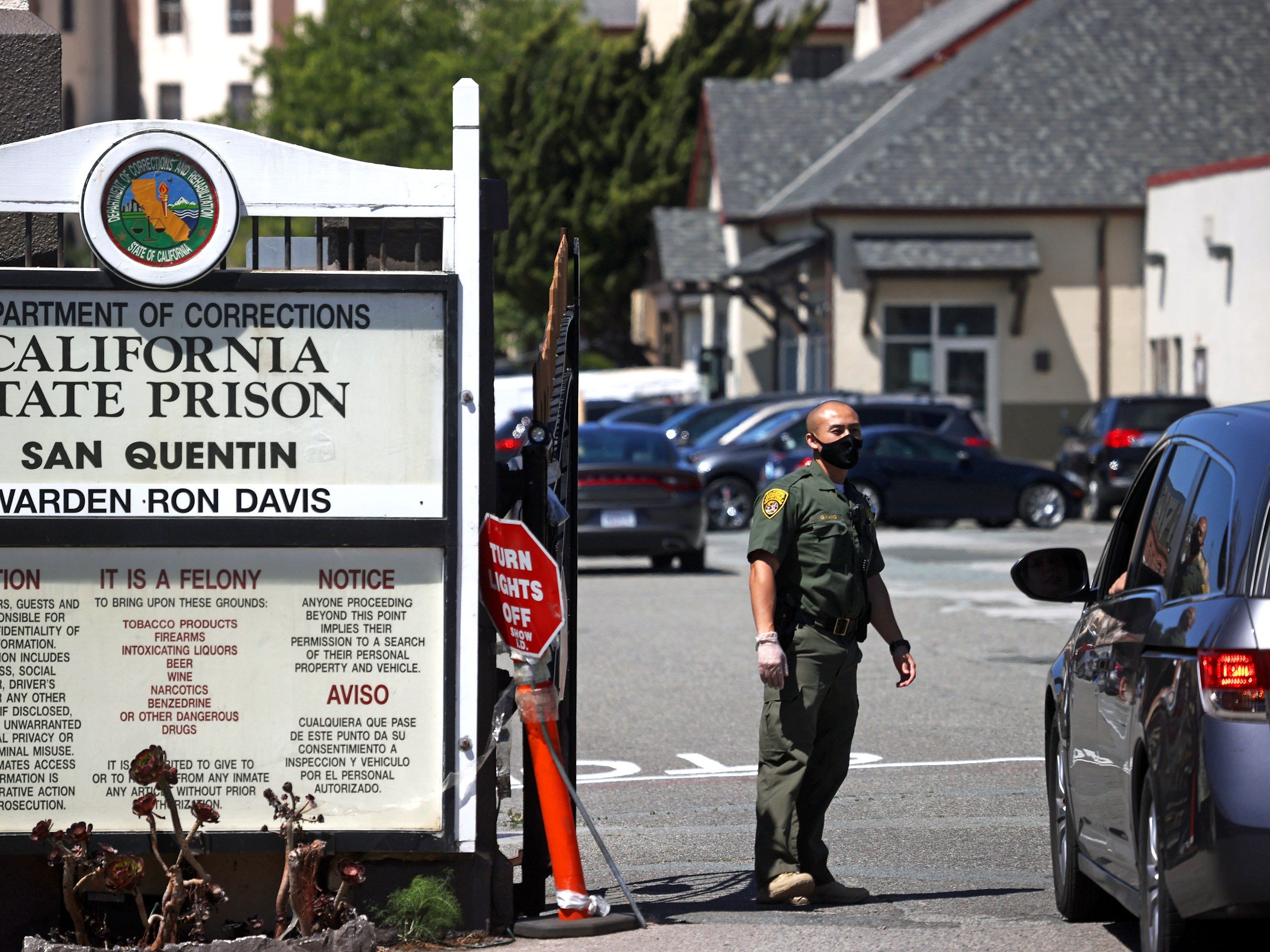 Now, however, I’m seeing COVID-19 knock us all down in a line, just like dominoes. So they don’t seem so cool anymore.

San Quentin has effectively made sure everyone’s at a high risk of getting the virus. It’s Thursday, July 2, and positive COVID-19 cases still infect North Block.

The corrections officers aren’t good at telling us whether we’re positive. For some people, the only hint has been when an officer keys your door, meaning you’re forced to stay in your cell while everyone else goes to chow. When they’re done, you pick up your tray or sack lunch with everyone else who tested positive. They don’t clean the railings or anything between groups of people with positive cases and negative cases. Everyone mingles in the same space, one after the other.

Everyone who lives in North Block will have COVID-19 sooner or later. It’s up to the disease whether we live or die because the system won’t release people who committed violent crimes, and that’s almost all of us in the cell blocks.

No emergency consideration is being given for the fact that some of us haven’t committed another violent crime in 20 years and, therefore, aren’t violent anymore.

Is that justice? Should I die of COVID-19 because of what I did, when the prosecutor didn’t even seek the death penalty? The message I’m getting is that you would rather see us dead than let us go free.

We’re all going to get it

Today is July 3. Last night I got my results back from the June 23 COVID-19 test. The virus was detected in my system. I have COVID-19.

Maybe the virus will show the mercy the system didn’t to some of us. Most people are reporting mild symptoms, like “I can’t smell anything” or “I can’t taste anything.” Some have had chills or body aches, or pounding headaches, like me.

Not all of us are so “blessed.” They say my neighbour Ron is on a respirator at an outside hospital. I know he left this unit with a fever even before the test results came back.

At this point, my only remaining symptom is the feeling that my nasal passage is congested and I can’t smell anything. I am fine otherwise. 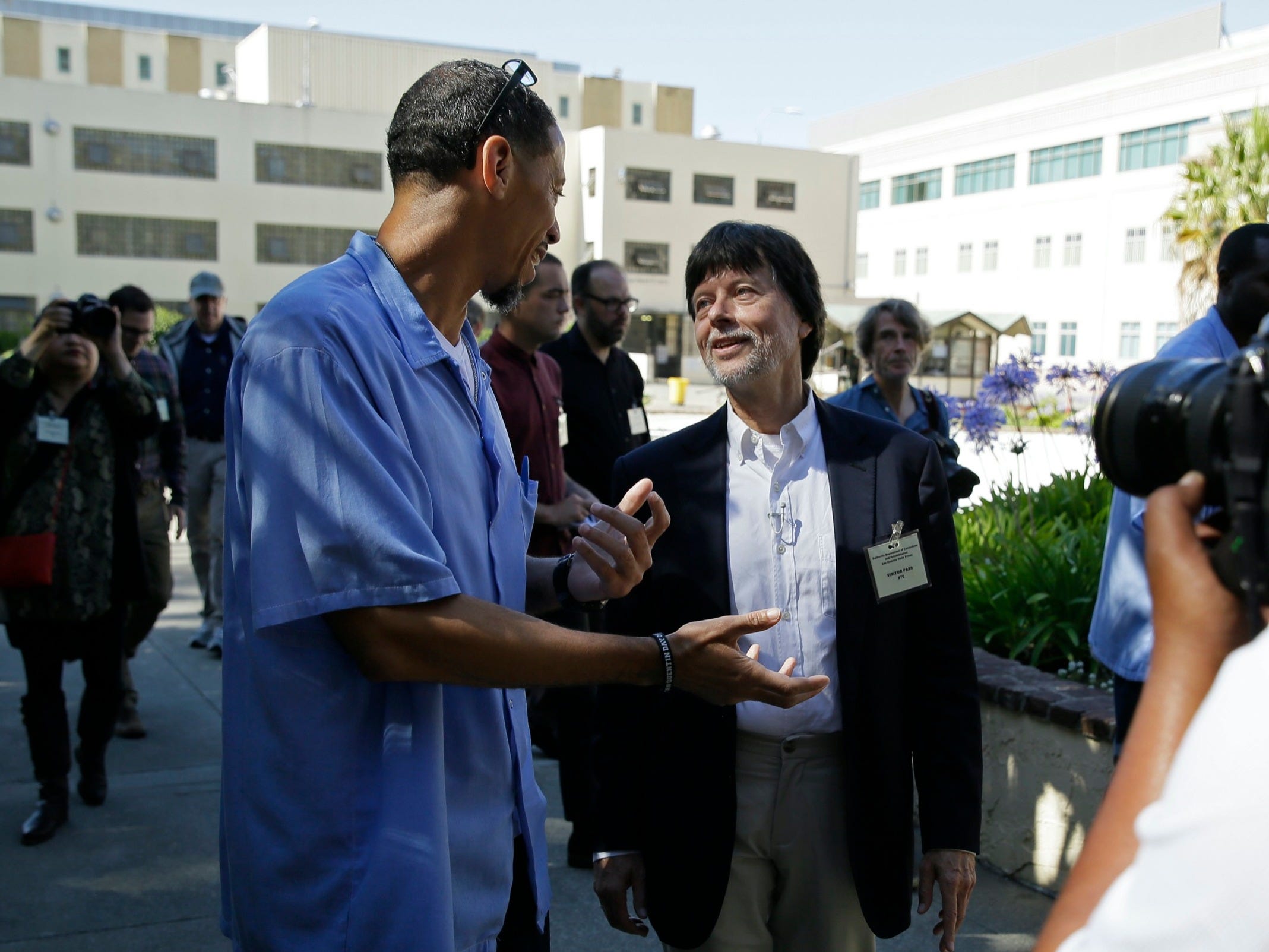 Last night, during feeding, someone on a tier right under me went out on a stretcher because he couldn’t breathe. I wonder, will my nasal passage close to that point?

That’s the worst part of the virus – stressing over other people. I feel strong; I believe I will live without a trip to the intensive-care unit. At least 21 people linked to the cases at San Quentin are already dead. And since so many people are seniors with high-risk medical issues, I expect dozens more. I know five people in this building who have served over 40 years and are close to going before a board and getting out, and I wonder, will they make it? 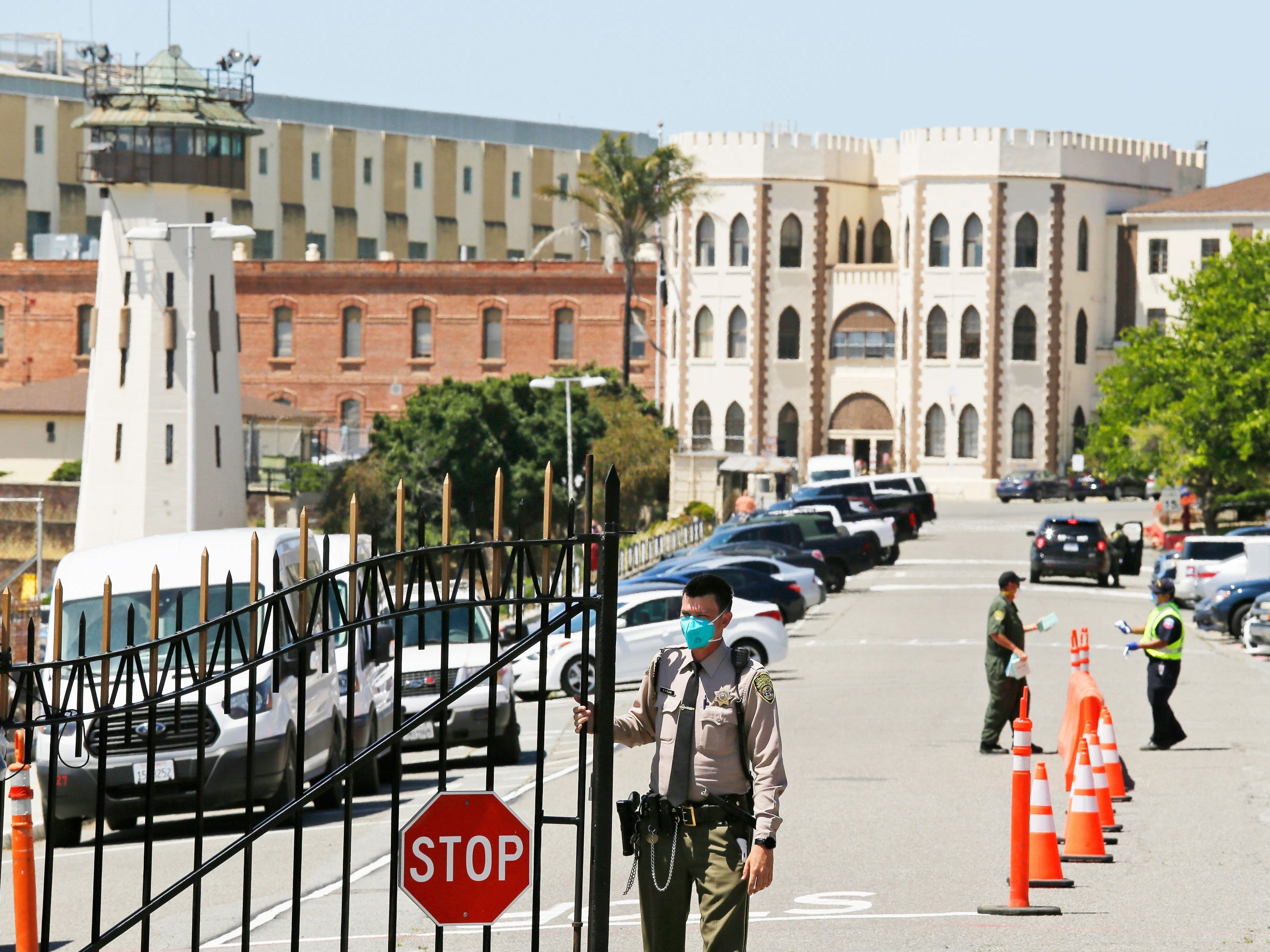 It’s so sad that I haven’t been able to call and comfort the people who love me. They just announced we can trade our shower time for a phone call. I haven’t showered in four days – good thing I can’t smell anything – but I’ll pick the phone over the shower. (For any of my loved ones and anyone with a loved one inside San Quentin: If you see that Texas area code from the prison’s collect telephone system, pick up and press 5 to accept the charges. You don’t know when you’ll get to talk to us again.)

Nor can I do anything to help the old-timers. I feel so freaking helpless because it’s already too late for most of them. They either have the virus or will get it real soon.

I do take accountability for my actions. I’m Black, so I know I have to be the change I want to see in the world, and that means not blaming others for my choices because no matter what, I had a choice. I might not like any of my choices, but it was still up to me to choose, and I chose wrong.

I hate this system built on racism. It’s a racism that created neighbourhoods with more obstacles than opportunities and then held anybody who didn’t beat the odds fully accountable for our bad choices. Where’s the justice? It can’t be that those who have killed deserve to die in prison from a virus. 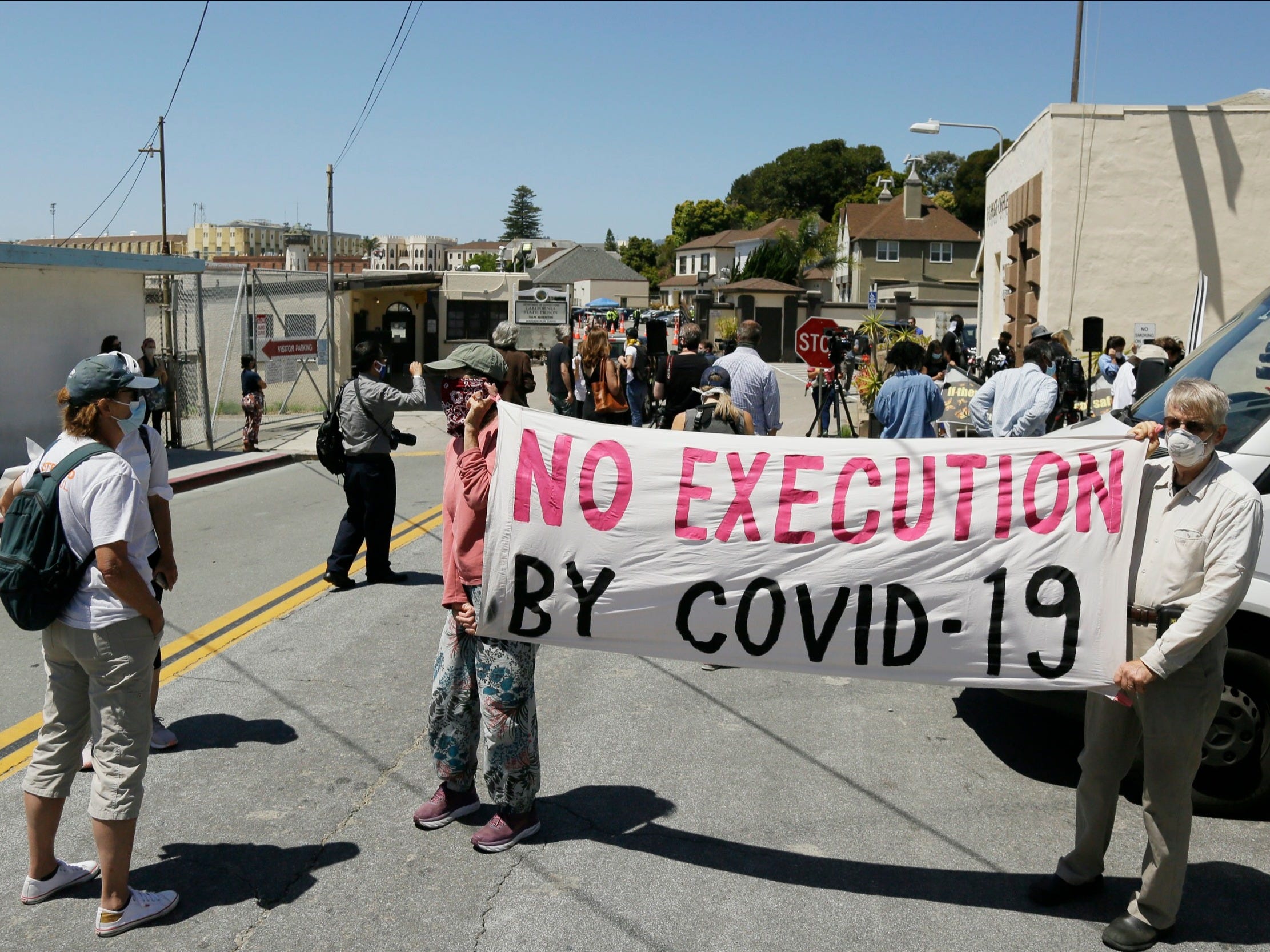 AP Photo/Eric RisbergTwo men with a banner before the start of a news conference outside San Quentin State Prison on July 9.

We still haven’t seen justice for George Floyd. It took his murder just to get a few cops fired. And if it weren’t for phones smart enough to catch him and massive demonstrations, Derek Chauvin would still be free. Even with the 8:46 video, the attorney general warned us that it’s hard to convict police officers.

Nobody is in prison for Breonna Taylor. Hell, I just saw a documentary where two white men got probation for beating an Asian man to death with a baseball bat in Detroit in the late ’80s. In California, a white guy got probation for rape. God knows how many Blacks the KKK murdered without prosecution. Here I stand with double life sentences for defending a friend and myself against armed robbers during a shaky business deal. My sentence is 55 years to life – plus the virus. 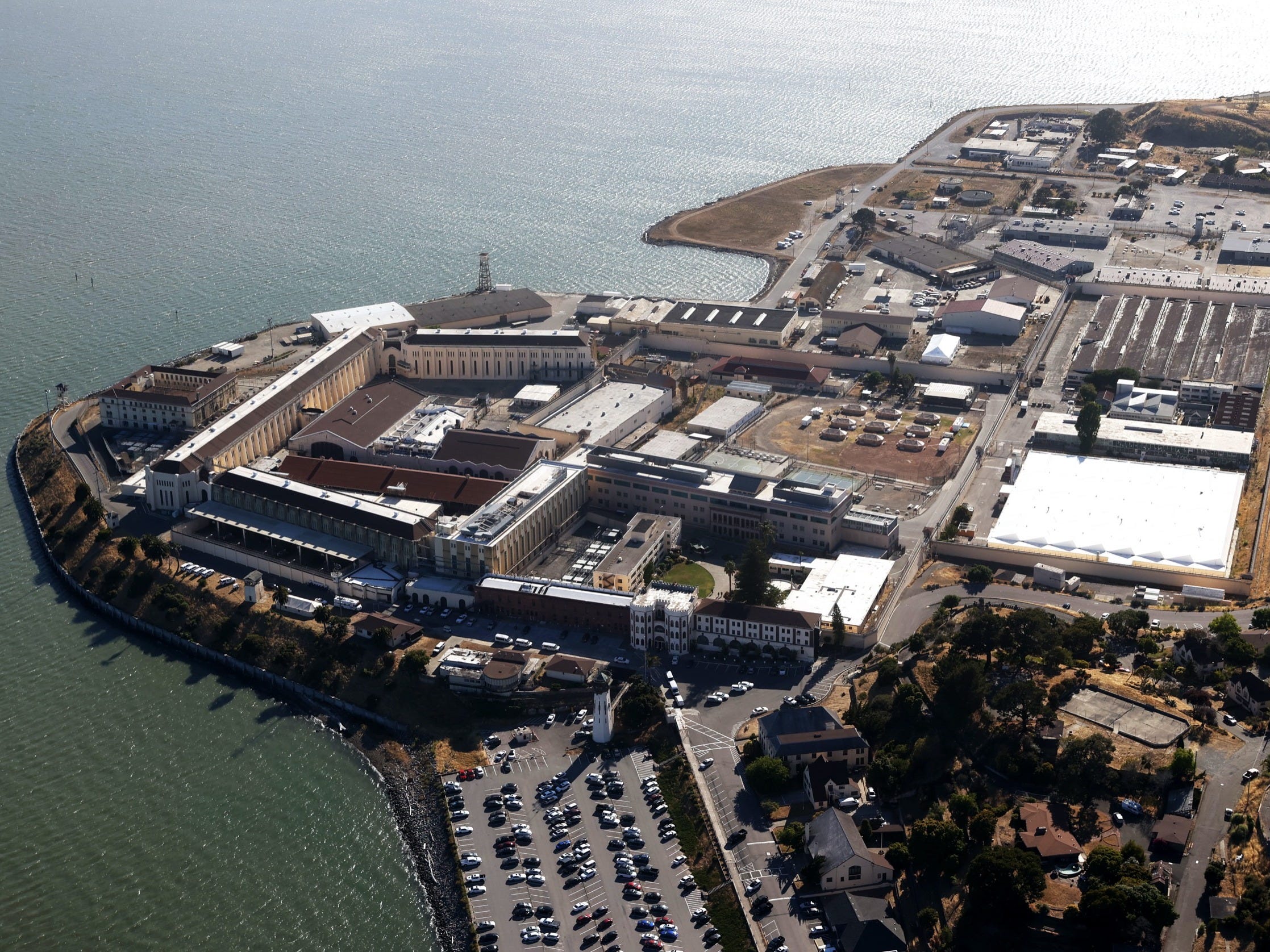 For the circumstances of my crimes and guys like me, the law says 15-to-life for second-degree murder and 5 1/2 years for attempted voluntary manslaughter. I’ll have 20 years on August 14. But I was sentenced to an additional 35-to-life for using a gun. Yet no politician is serving a day in prison for accepting NRA money to keep the gun-show loopholes open that flood the streets with illegal guns, like mine.

So I ask you: What is your definition of justice? I once thought justice meant inflicting pain back on the culprits. Now, more aware, I see justice as healing, not inflicting more harm.

I killed one person. The coronavirus is killing more.

Most people are as good as their circumstances. But when you’re Black, you have to be better than your circumstances, work harder, endure more, beat the violence of racism with the love of MLK, not more violence.

They could have released 900 people from San Quentin without a crime spree. For people who have committed violent crimes and served life sentences, the recidivism rate is dramatically low, less than 2%, according to studies, and none for a new violent crime.

Most people age out of crime after 40. Hell, a lot of these “menaces to society” in here are grey-haired old men on walkers and canes. We’re the safest group to release, but I guess “violent criminal” is the new dog-whistle word for Blacks. We get arrested more for violent crimes than other races, so despite the lowest recidivism rates, the doors remain closed to those who have committed violent crimes even during a freaking deadly pandemic. 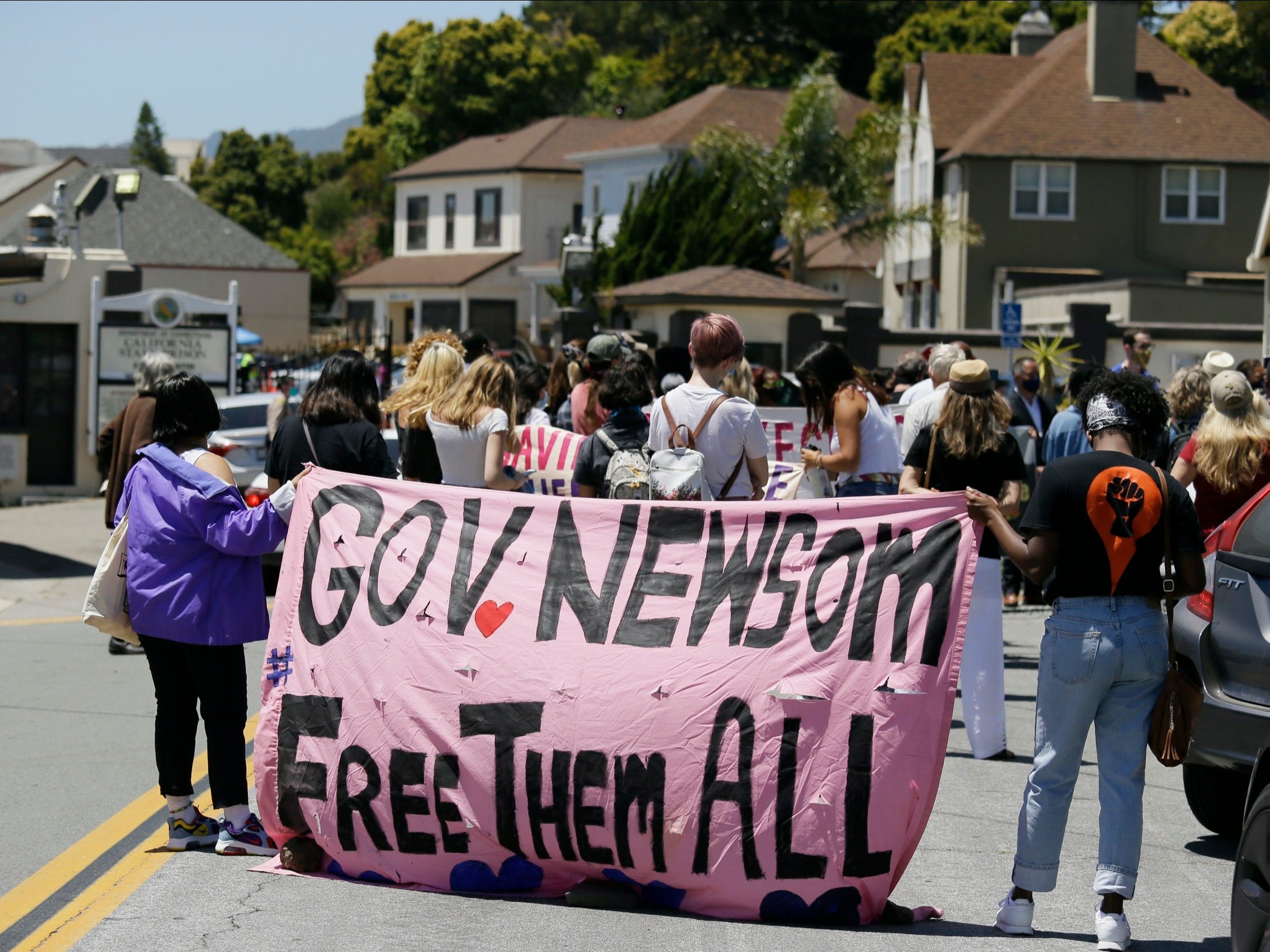 Yeah, there are some people who aren’t ready, some who may never be ready to safely release. But there are more than 3,200 people here, of which I firmly believe we can squeeze a list of 900 people to release without endangering the public. Some would even improve society.

And don’t tell me COVID-19 is a natural disaster and not the system’s fault. Out there in the world, yeah. But in prison, you can’t get the virus unless someone brings it in. In our case, they transferred the virus here from another prison. Then they didn’t learn and transferred it from here to another prison – instead of letting people go.

As horrible as I was years ago, I killed one person. Now 22 people have died in my prison alone from this COVID-19 fiasco.

And you call me violent?