AP Photo/Jacquelyn MartinStaff of ‘Food and Friends,’ a food-distribution service for people with life-challenging illnesses, practice social distancing by standing apart as they listen to Washington, DC mayor Muriel Bowser speak about the city’s response to the coronavirus crisis, March 16, 2020.

About 169 million people, or 52% of the US population, are currently affected by some kind of stay-at-home order. These measures are designed to “flatten the curve,” or slow the spread of the coronavirus to avoid overwhelming local healthcare systems.

The best ways to stymie the virus’ spread are to test widely, isolate people who are ill, trace who sick people had contact with to find others who might have been exposed, quarantine anyone who may have been exposed to the virus, and encourage people to practice social distancing.

Currently, 23 states have issued stay-at-home orders, as have many major metropolitan areas. But not every state’s residents are practicing the same levels of social distancing. Unacast, a location data and analytics firm based in New York, launched a live Social Distancing Scoreboard on Tuesday that maps how well states and counties were social distancing.

Here’s what the findings looked like as of Tuesday. 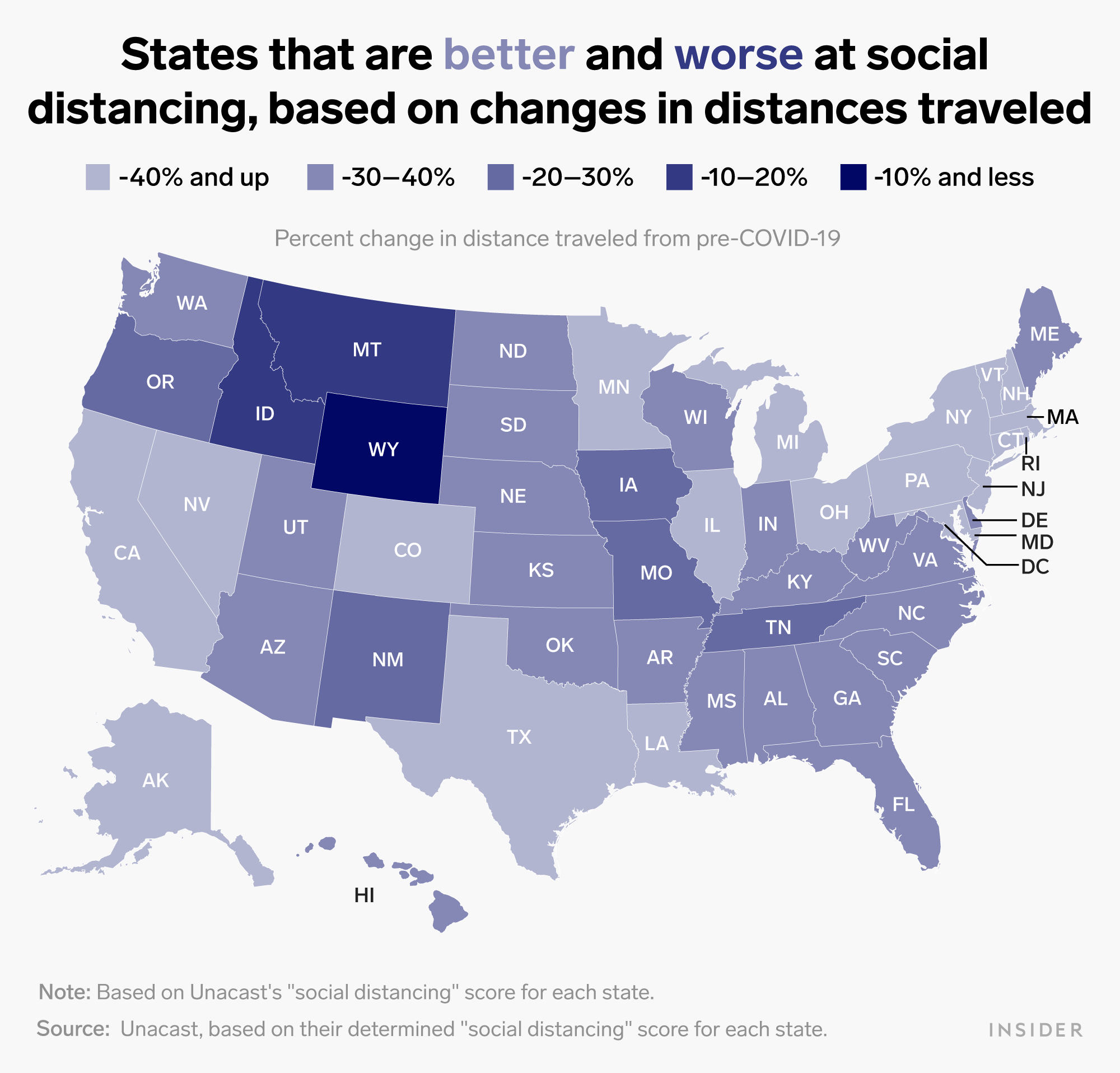 These scores are based on changes in the average distance travelled by residents before and after the coronavirus outbreak grew in the US.

To create the map, Unacast aggregated data from tens of millions of anonymous mobile phones whose users had opted in to location sharing via various smartphone apps. It also analysed people’s phones’ interactions with each other each day.

Some states are doing more social distancing than others

According to Unacast CEO Thomas Walle, measuring the change in people’s distance travelled per day captures how people have changed their everyday behaviour. Switching to a home office, for example, strongly reduces a person’s daily travel distance. So does avoiding non-essential trips for entertainment or recreation, and cancelling travel and vacation plans, Walle said on the Unacast website.

Unacast’s data shows that Wyoming, Montana, and Idaho have been doing the least social distancing, while Rhode Island, New Jersey, and Washington, DC, topped the list as of Tuesday.

Unacast assigned each state a letter grade according to how that state’s population decreased its average distance travelled. States with populations that exhibited a 40% decrease in the average distance travelled were assigned a grade of A, while those that exhibited less than 10% decrease were assigned an F. Wyoming was the only state that received an F, but Montana and Idaho both received a D (indicating a less than 20% decrease in movement). 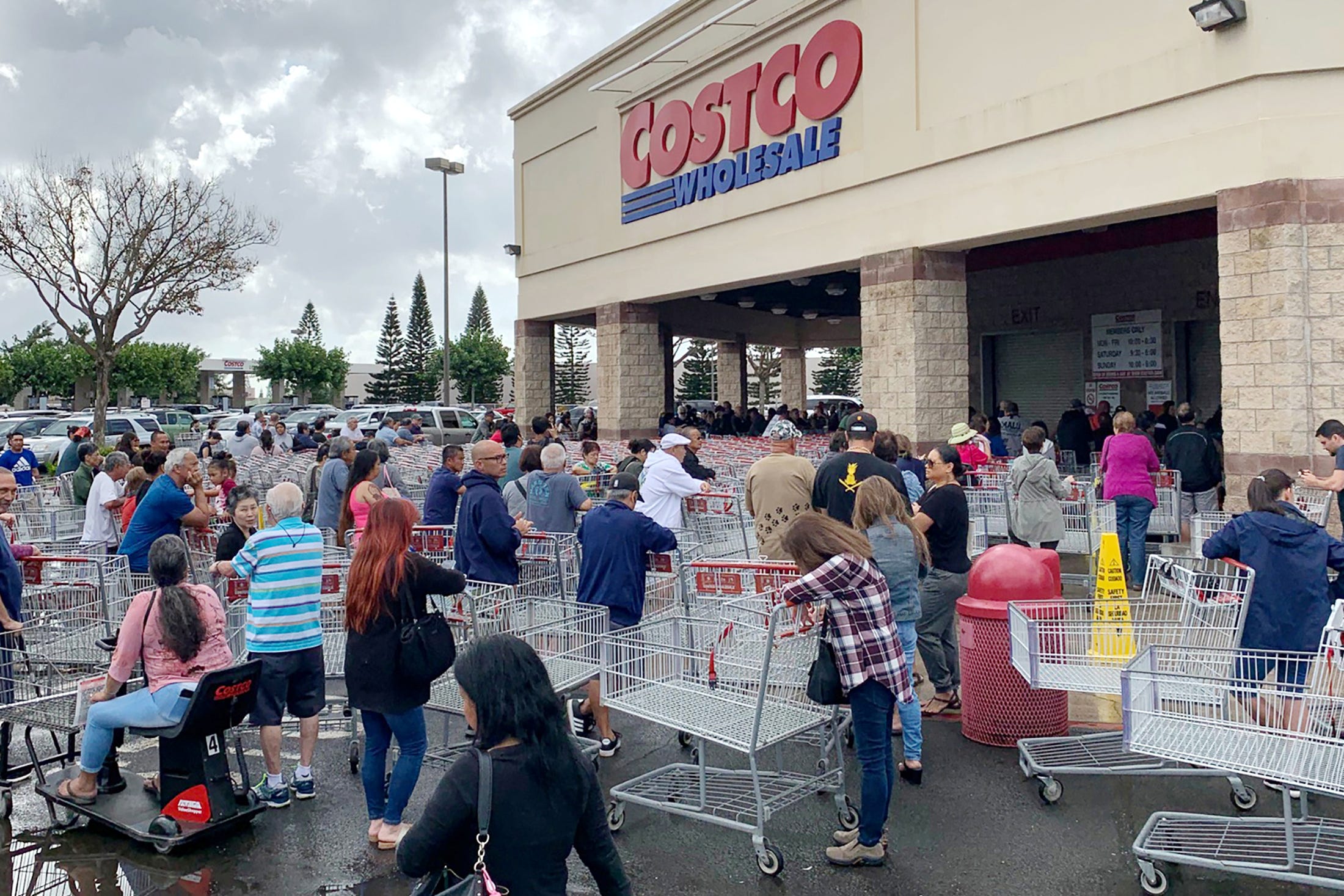 Duane Tanouye / ReutersShoppers flock to a Costco in Hawaii, March 5, 2020.

Nineteen states and Washington, DC, all received an A.

Failing to ‘flatten the curve’

The country’s outbreak appears to be getting worse over time, with each day bringing an equal or higher number of new confirmed cases than the one before.

Its epidemic growth curve looks like a steep staircase.

This suggests the US has thus far been unsuccessful in efforts to flatten the curve. Without social distancing, the number of cases is likely to keep climbing. Flattening the curve, on the other hand, buys time for US healthcare providers to obtain more tests, beds, and ventilators; bolster their arsenals of supplies; and research potential treatments and vaccines.