Hong Kong is testing hundreds of families after finding 2 new cases after 23 days of no local infections. It's a strategy many countries are using as they reopen.

Tyrone Siu/ReutersHealth workers in protective gear at a housing compound in Hong Kong in February 2020.

A 66-year old woman and her five-year-old granddaughter had tested positive for COVID-19, Hong Kong’s Centre for Health Protection said Wednesday, adding that it is investigating how they contracted it.

The city is now quarantining their close contacts and testing residents in the two patients’ residential compounds for the virus.

Dr Chuang Shuk-kwan, the head of the centre’s communicable disease branch, said testing the two cases – which are the 1,049th and 1,050th discovered in the city before the outbreak began – would help find the source of their infections.

“For the new local cases, Cases 1,049 and 1,050, they are family contacts. We have quarantined all the close contacts in the quarantine centre and we will test them,” she said. 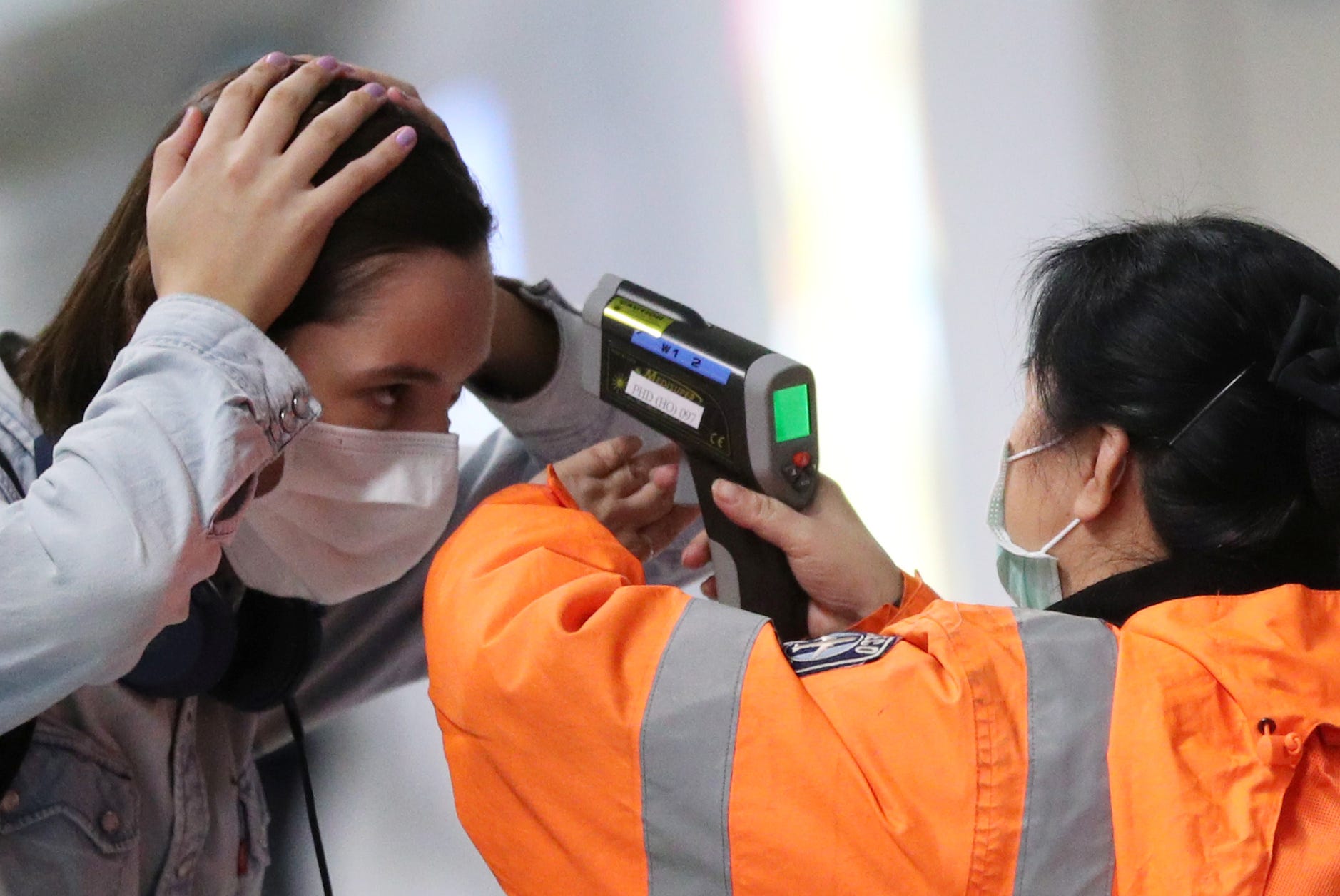 REUTERS/Hannah McKayA worker checks the temperature of a passenger arriving into Hong Kong International Airport with an infrared thermometer in February 2020.

These were the first locally-transmitted cases in more than three weeks, the centre said. Local transmission means the coronavirus spread within the area and did not involve someone travelling into the country.

The Hong Kong Free Press reported that 23 consecutive days had passed since the last local case.

Given the lengthy period between the last recorded infections and the new ones, the centre is now carrying out widespread testing to try and figure out how it spread.

This involves testing two residential compounds where the woman and her granddaughter had stayed in during the incubation period. They house a total of about 860 households. Isaac Lawrence/AFP via Getty ImagesA man’s temperate is checked before he enters a a government office building in Hong Kong on March 2, 2020.

“Because it has been quite a while since we have had a local case, we are trying to take this opportunity to test the residents in the housing blocks where she stayed or lived during the incubation period, as well as the infectious period, to understand more about the local situation in case there are some cases silent transmission that we can we can detect,” Chuang said.

She said the woman had also travelled through the city regularly and visited a market, so it is possible she did not get the virus from where she lives.

“This test result will indicate the epidemic situation in the local community,” Chuang said. “It does not mean that the patient acquired the disease from these two blocks, because she also participated in a bit of community activities.”

“We are also investigating the people who are in contact with her household to see whether there are other possible sources,” she added.

Other countries are using similar strategies to reopen

Hong Kong was one of the first places outside of the Chinese city of Wuhan to report cases of the coronavirus, first doing so in January.

However, Hong Kong has reported just 1,051 cases and four deaths over the course of its outbreak.

Many of those cases have been imported from abroad. Since Wednesday – when the local cases were announced – the city has recorded one imported case, from a man who had travelled from Pakistan.

Hong Kong’s strategy has involved widespread testing and contact tracing, alongside other measures like putting tracking bracelets on those who were under home quarantine, stopping non-residents from coming into the city, and putting social-distancing measures in place in any businesses that stayed open. Willie Siau / Echoes Wire/Barcroft Media via Getty ImagesA tracking wristband given to anyone arriving from a foreign country into Hong Kong, which they are required to wear for 14 days.

The government tracks positive cases on a public map, which also shows where in the city cases have been recorded, down to the individual building.

Experts consider widespread testing a key strategy for countries as they reopen, and many countries are taking similar steps as they start to slowly ease restrictions.

Germany has been mass testing throughout its coronavirus outbreak, and is telling individual regions to reintroduce lockdown restrictions in the event of a new spread of positive cases.

This means new waves of the virus could be slowed without having to introduce country-wide measures. 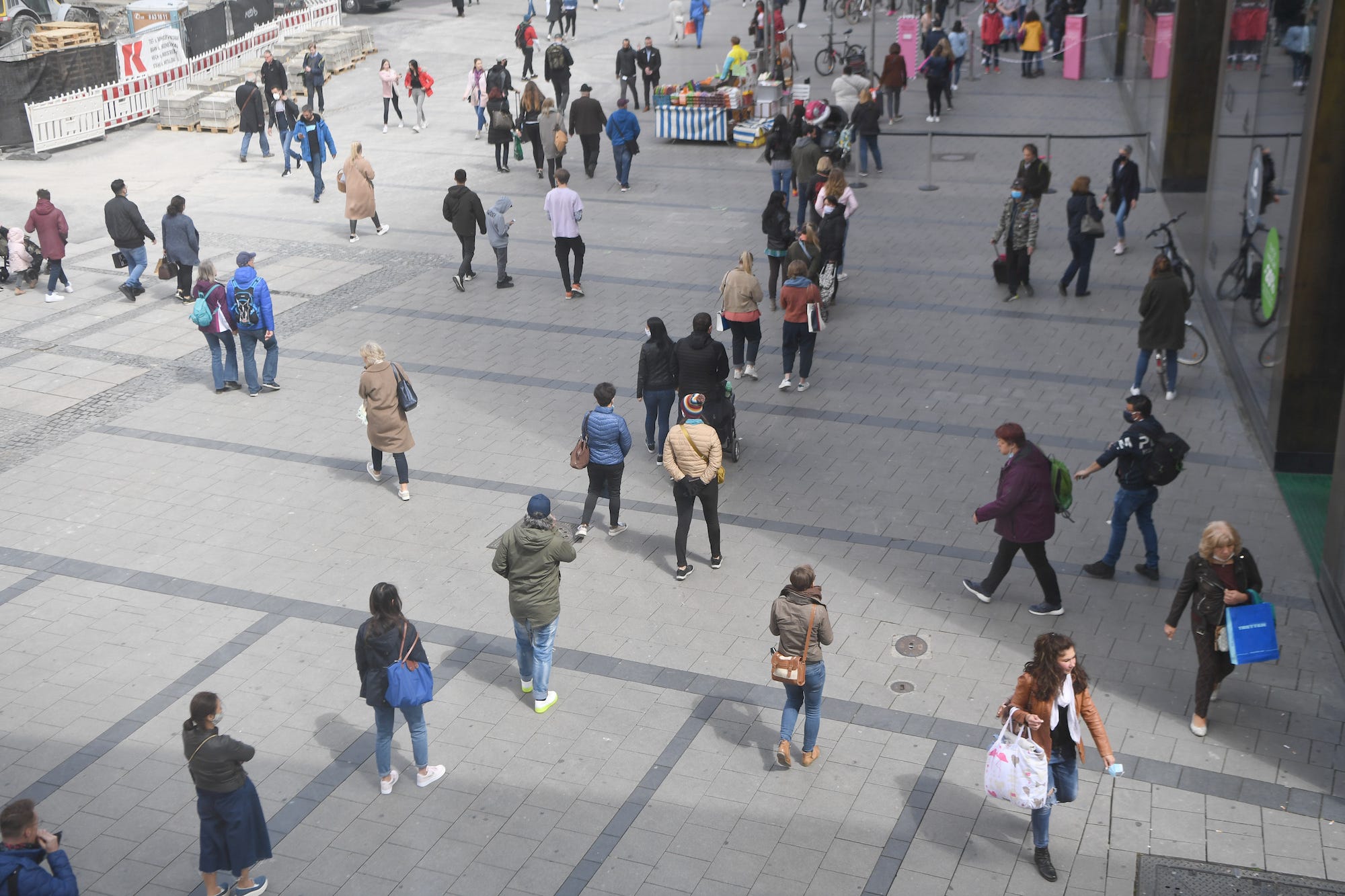 Andreas Gebert/ReutersPeople waiting in line in Munich, Germany, on May 12, 2020, after the country’s coronavirus lockdown was eased.

Wuhan is testing all 11 million of its residents after six new cases were found after a 35-day streak with no new recorded in fections.

South Korea, meanwhile, has used mass testing to avoid having to implement a total lockdown. It is now using testing to try and slow any new outbreak after a cluster of cases was discovered from nightclubs.

Other European countries like Denmark say they are using testing to make sure there are no flare-ups from the virus, as places like shops and schools slowly reopen.

The US, meanwhile, still lags behind testing other countries when it comes to testing per capita, even as states reopen.

Dr. Anthony Fauci, the director of the National Institute of Allergy and Infectious Diseases, is warning of “needless suffering and death” that would “actually set us back on our quest to return to normal” without steps like widespread testing and contract tracing.