French people ignored officials' warnings to isolate themselves because of the coronavirus. Now they need a form to leave the house. 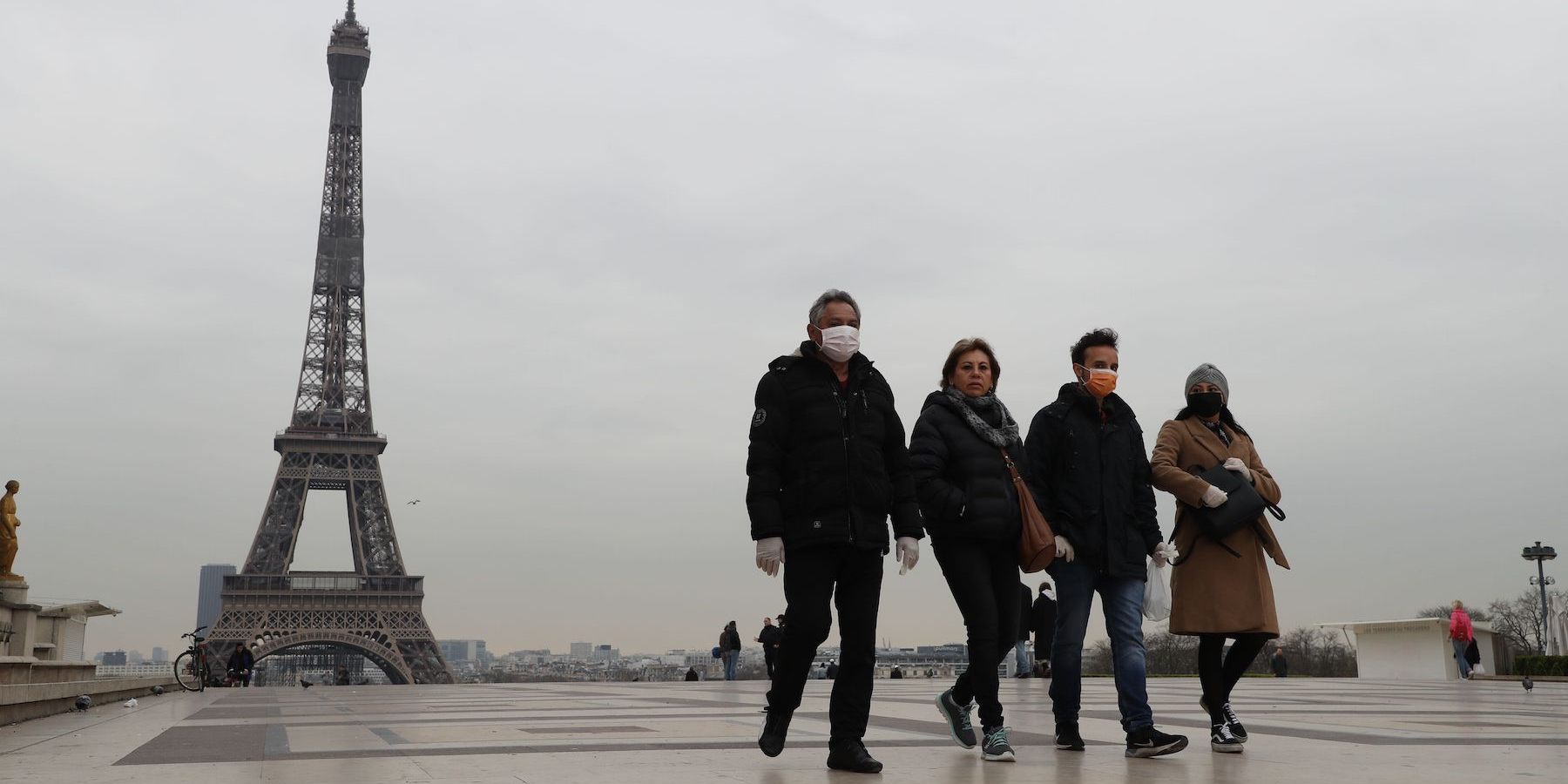 LUDOVIC MARIN/AFP via Getty ImagePeople in front of the Eiffel Tower in Paris on Tuesday, a few hours before the order for all French citizens to stay at home came into effect.

France’s ramped-up coronavirus measures now require people to produce a document that justifies why they’re outside – even just to go a walk or to the shop – after people ignored the government’s pleas to stay at home.

French President Emmanuel Macron on Monday announced a 15-day lockdown starting at midday on Tuesday, saying people’s journeys outside would be “greatly reduced.”

He said people should leave their homes only if it is necessary – for example, to go to work, to get medical care, to buy groceries in authorised shops, or to exercise alone.

But in order to do any of those things, people in France must download and fill out a form for every trip they want to make. The police can check the forms and issue fines of €38 to €135 ($US40 to $US150) to people who don’t have one.

The document asks for a person’s name, birthdate, and reason for going outside: 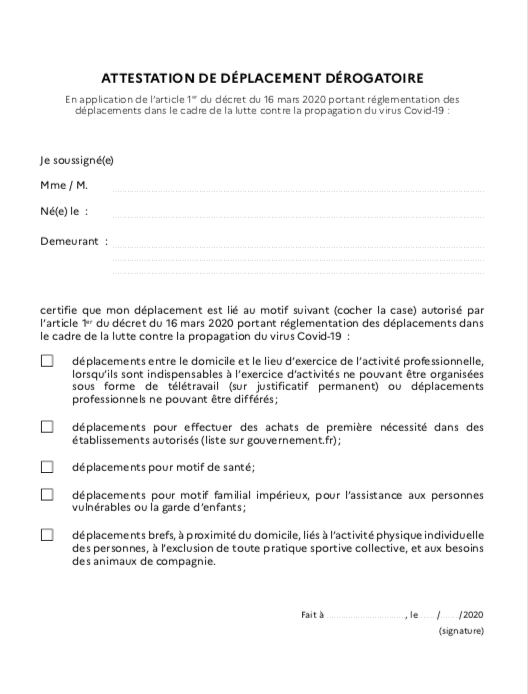 The Government of FranceThe form that people in France must fill out and be able to produce when outside for the next 15 days.

“We are at war,” Macron repeatedly said during his speech on Monday.

Interior Minister Christophe Castaner said on Monday that 100,000 police officers would be deployed to enforce the rule, according to Reuters. 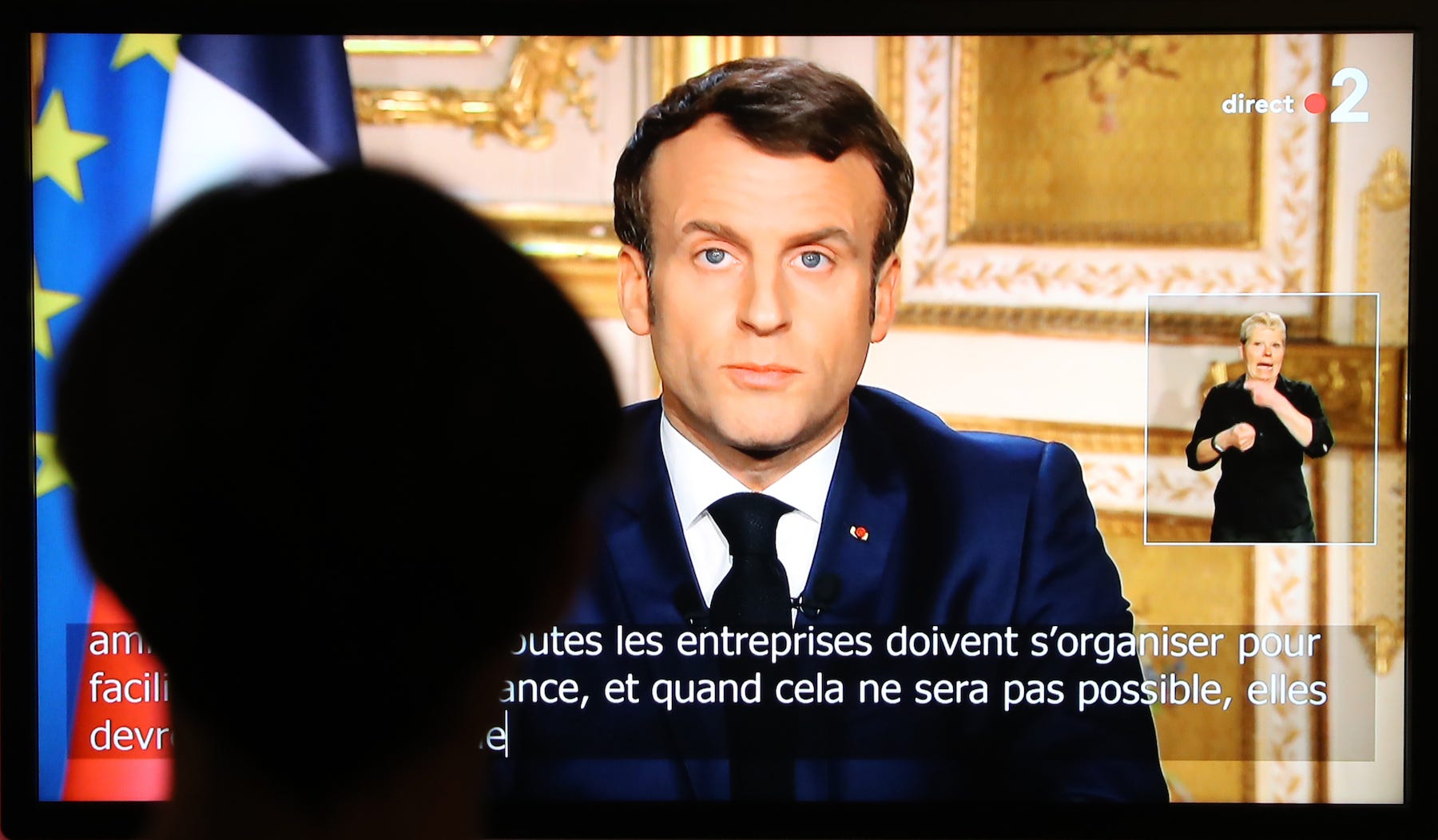 Macron also announced restrictions on travel between France and other European Union countries for 30 days.

France has more than 6,600 coronavirus cases and at least 148 deaths, according to a tally by researchers at Johns Hopkins University.

The virus has infected more than 180,000 people and killed more than 7,000 people, prompting governments around the world to launch extreme measures and close their borders.

France has followed the pattern of many countries: The government first urged people to stay home but turned to increasingly strict measures when its warnings were ignored or not widely followed.

Hervé Berville, a French lawmaker and ally of Macron’s, told The New York Times that he was frustrated that many people were still crowding in shops and parks on Sunday.

“There was something shocking about it,” he told The Times on Monday.

“The French are not respecting the security warnings,” he added. “People are not following social distancing.”

He said it was “shocking” that people ignored “the advice coming from the highest levels of government.”

AP Photo/Rafael YaghobzadehPeople stroll along the bank of the Seine in Paris on Sunday.

In announcing the closure of businesses like shops and cinemas over the weekend, French Prime Minister Édouard Philippe said: “We have seen too many people in cafes and restaurants. In usual times, this would make me happy, because this is the France we all love. But for a few weeks, this is not what we should be doing.”

Reuters reported on Monday that people were gathering outside coffee shops even though the shops were offering only takeaway in a bid to stop people from forming groups or getting too close.

“Just getting a takeaway, they gather outside, chat, smoke a cigarette, drink their coffee,” Frederic Monnier, the owner of Le Cafe Tabac in Paris, told Reuters. “So they’re not respecting the rules.” 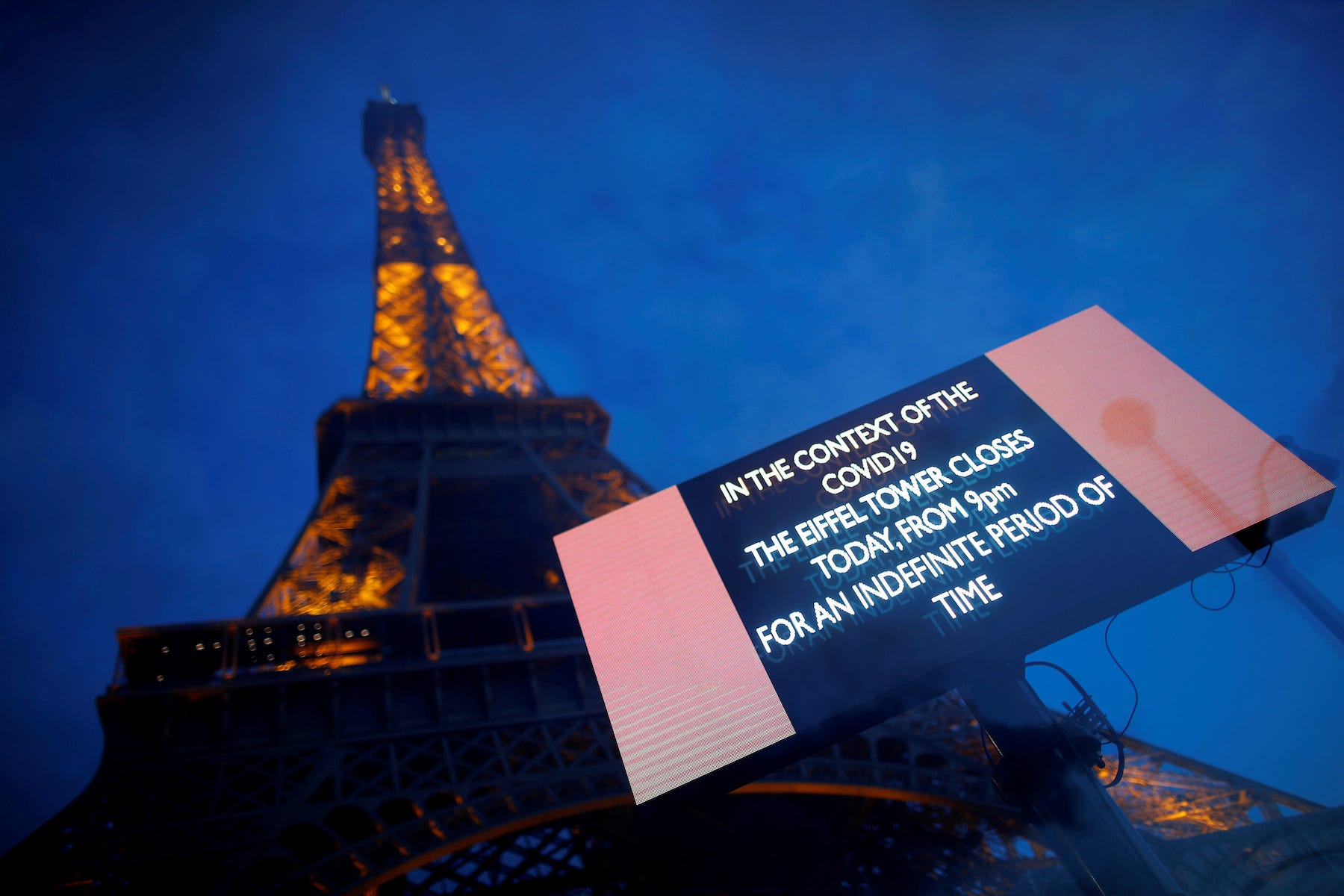 REUTERS/Gonzalo Fuentes/File PhotoThe Eiffel Tower on Friday next to a board that reads ‘In the context of the COVID-19 the Eiffel Tower closes today from 9 p.m. for an indefinite period of time.’

France’s adoption of stricter measures has brought its response closer in line with Spain’s and Italy’s.

Italy, which has been ravaged by the virus, has banned public gatherings, blocked all nonessential travel, and told people to stay at home. The country’s system is similar to France’s: People going outside in Italy also need to produce a form.

The Spanish government declared a state of emergency on Saturday, placing the country in lockdown. It said people should leave their homes only if they need to buy food or medicine or go to work or the hospital.

Read all of our coronavirus coverage »